So Figures Toy Company’s latest Batman ’66 wave is out (nominally Wave 4, for you scoring at home) and I’ll tell you right off, this is a set I’ve been eagerly awaiting.

Do they measure up? Let’s take a look! (And for ordering info, click here.) 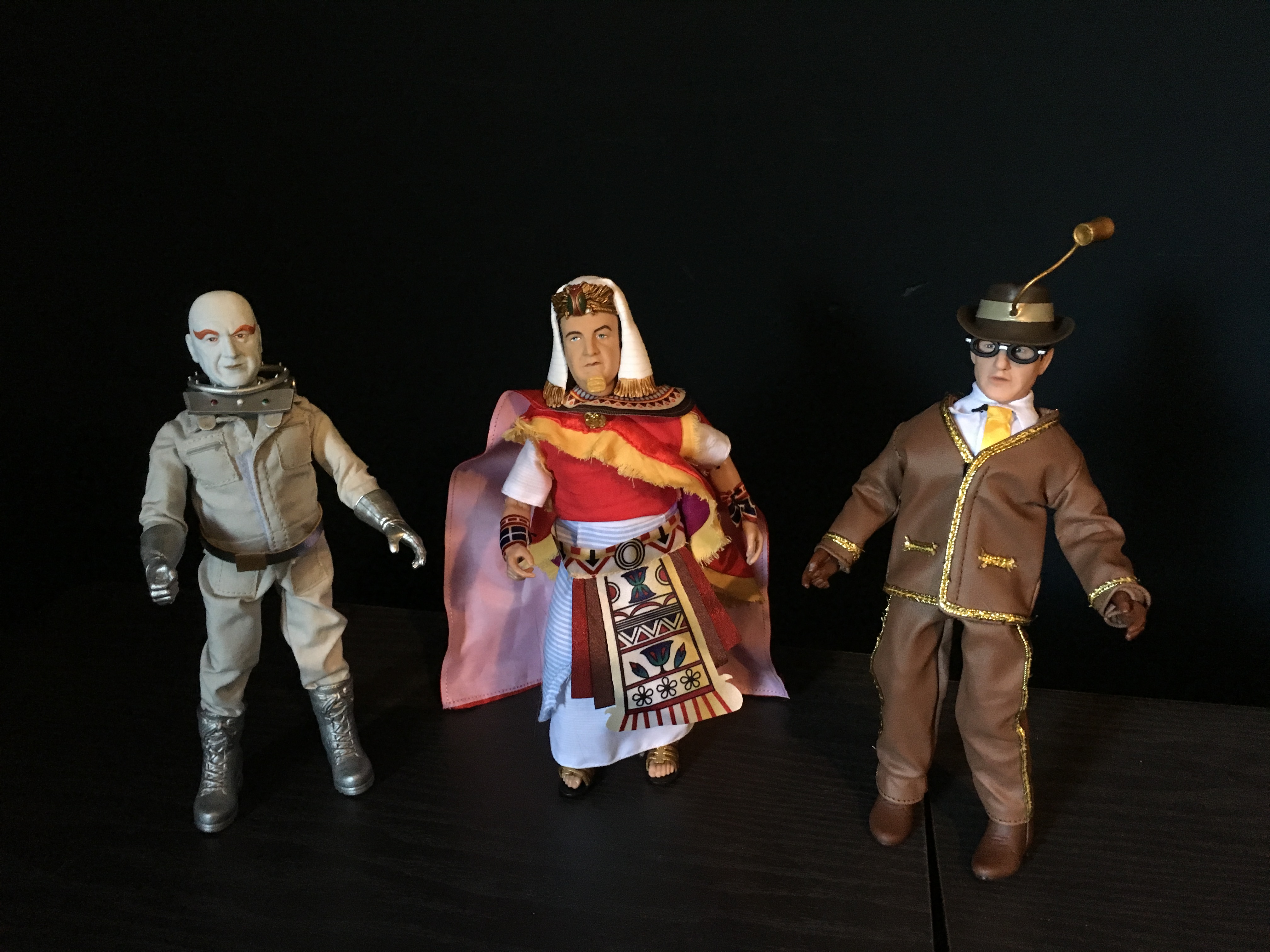 I’m starting with Alfred because I can dispense with him quickly. Most fans have waited to get him in Wave 4, I’d wager, but I already have the Entertainment Earth Green Apron variant and have already featured him here. The two figures are the same except for — you guessed it — a green apron accessory. Anyway, Alfred’s great. But for the full review, click here. 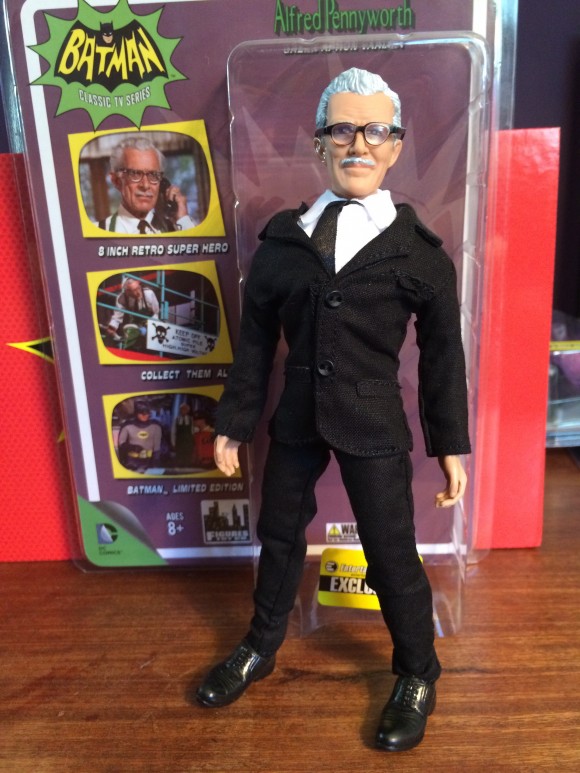 Y’know, when this whole line came about, you knew that all the big ones were gonna be represented eventually, even if Yvonne Craig signed on late. But there’s something really, ahem, cool about going a level deeper.

And no villain exemplifies that second tier better than Mr. Freeze. 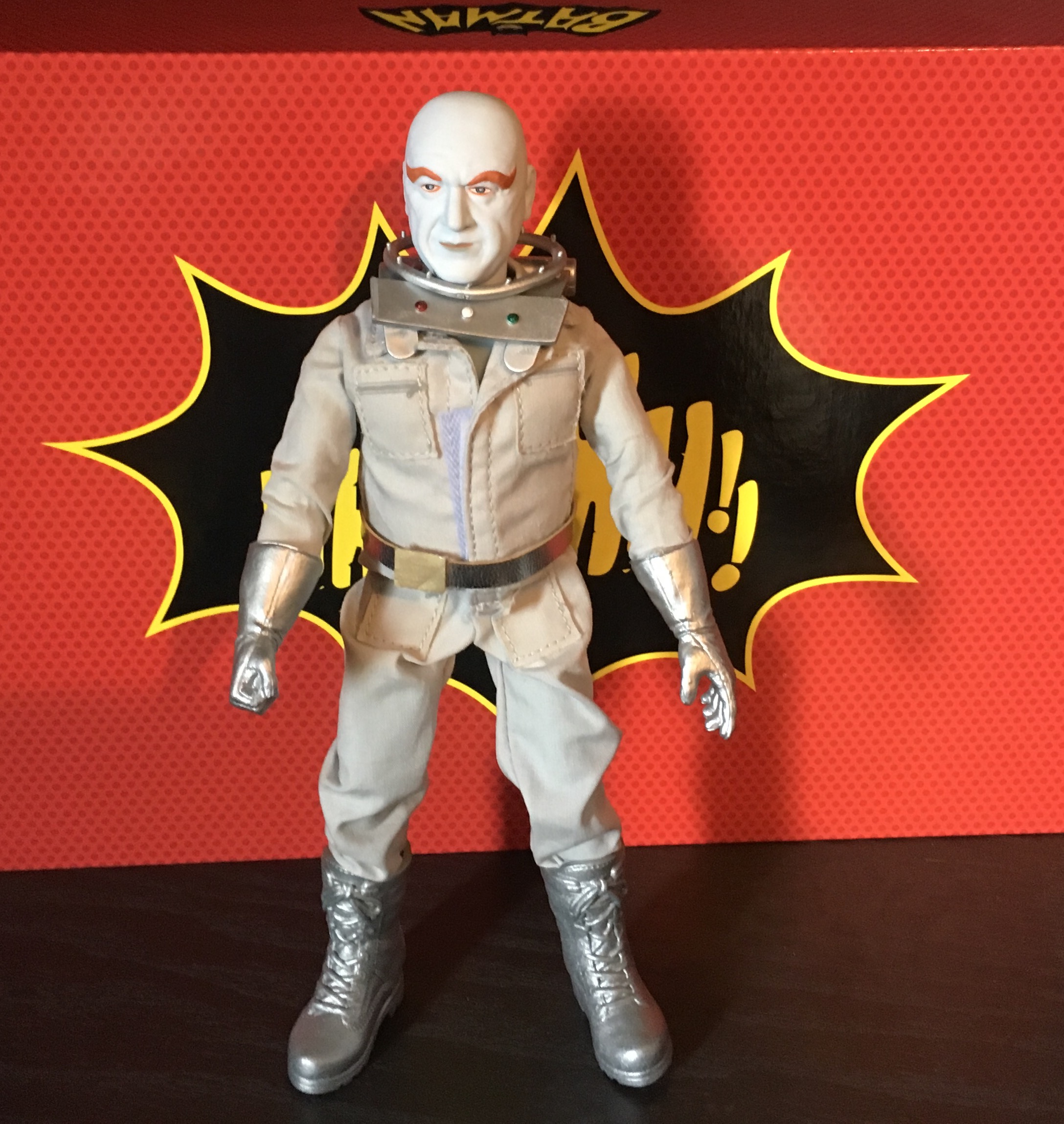 See, if Joker, Penguin, Riddler and Catwoman are the Big Four, then Mr. Freeze is next in line — and man, did I want a Mr. Freeze figure as a kid, in any incarnation. There was a playset by Ideal that featured Mr. Freeze as a fifth villain, and that made that set so much better. 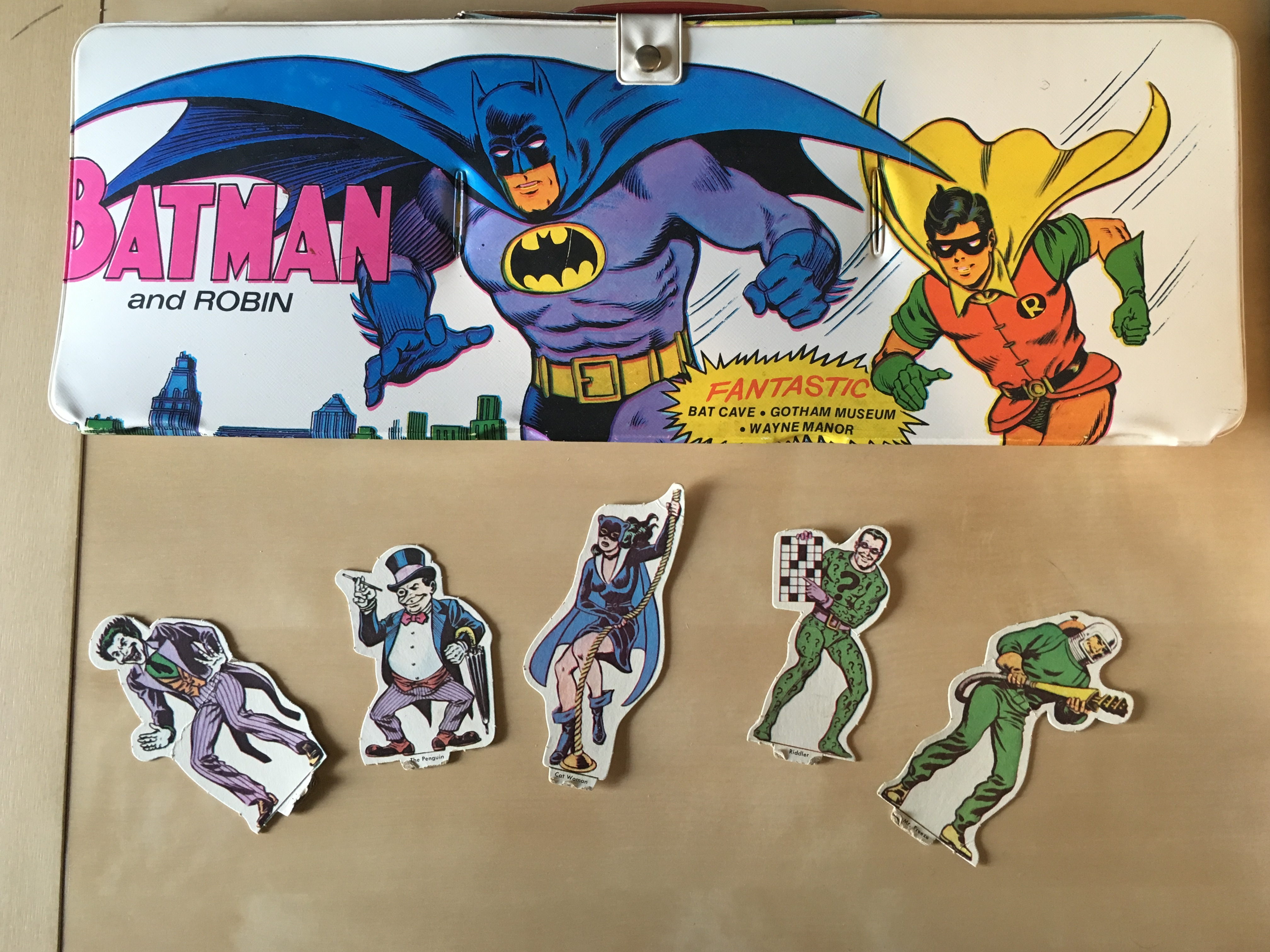 The great thing here is that the Warner Brothers license allows Figures Toy to produce the best-looking version of the three Misters Freeze to appear on the show. I liked the George Sanders episode the best, but Otto Preminger really helped define the look. His whole head is an optical illusion — it’s so big and bald and blue that, when combined with the freeze collar, you think he’s wearing a domed helmet! 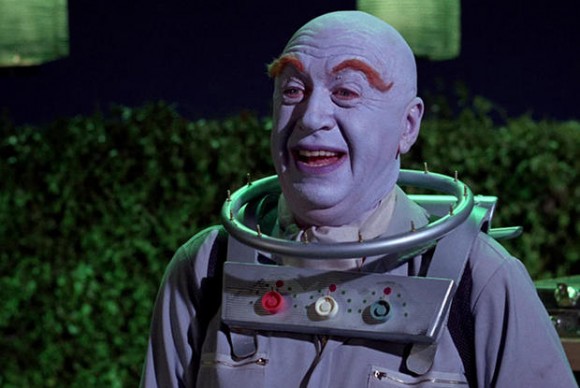 (I talked about the Preminger episode at great length on the must-listen Batcave Podcast hosted by John S. Drew. Click here to download, listen and be entertained.)

As far as the figure goes, the head sculpt is one of the best in the entire line, right there with the Mad Hatter. Even the eyebrows are the right shade of red/orange. They also managed to set his belt in just the right way to capture Preminger’s dumpy shape. If I have a beef, it’s the same I have with a number of FTC figures: He doesn’t come with an accessory, in this case a freeze gun.

But I acknowledge that’s being a tad spoiled. Because I love living in a world where this figure exists to begin with. 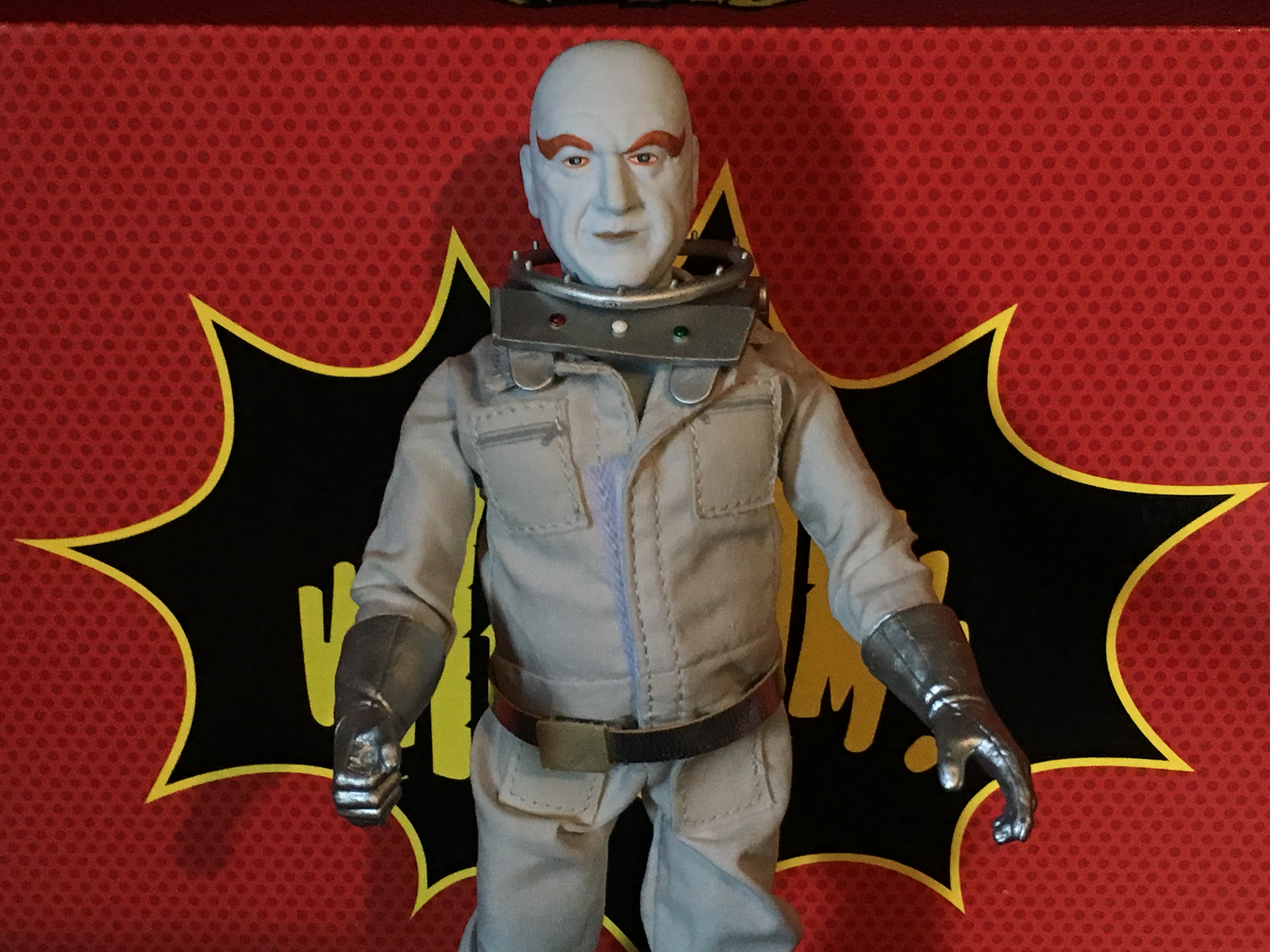 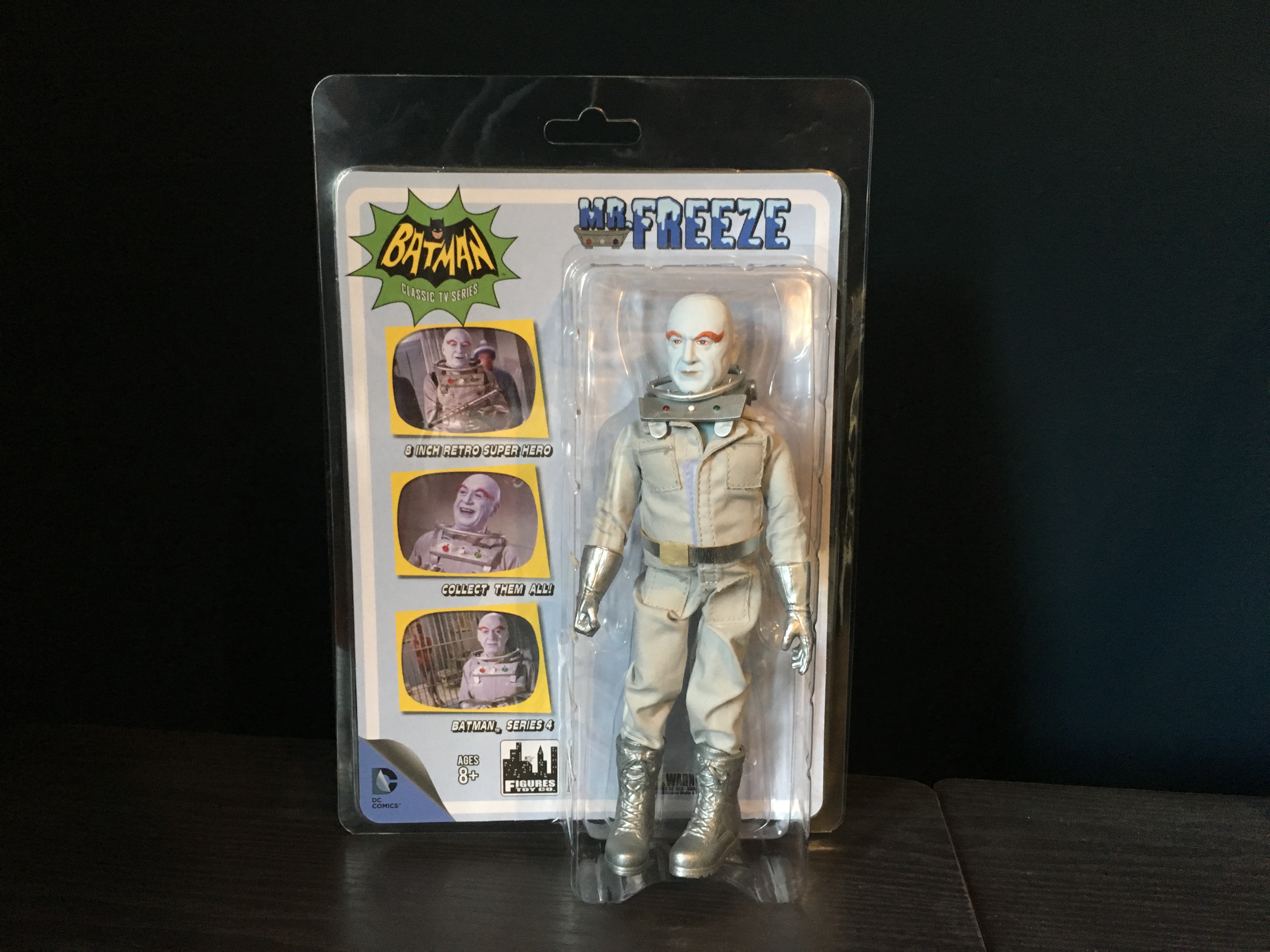 Gotta tell you, I just never really liked Bookworm all that much. And watching the show again with adult eyes hasn’t really changed that. I know there’s something of a Bookworm cult out there — led in part by the aforementioned Mr. Drew — but I just don’t see it. I love Roddy McDowall but he just never seemed like much of a threat. (I did like that bell-clapper death trap, though.) 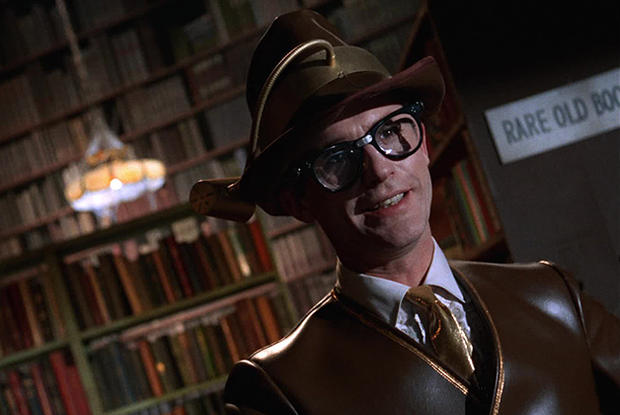 Nevertheless, FTC’s done a nice job with this one. Not only is Bookworm’s color scheme right on, but his outfit is pleather, simulating his on-screen look, and he comes with “taped” glasses and a “reading lamp” you can attach to his fedora. (Though be careful you don’t lose the lamp, it falls off easily.) 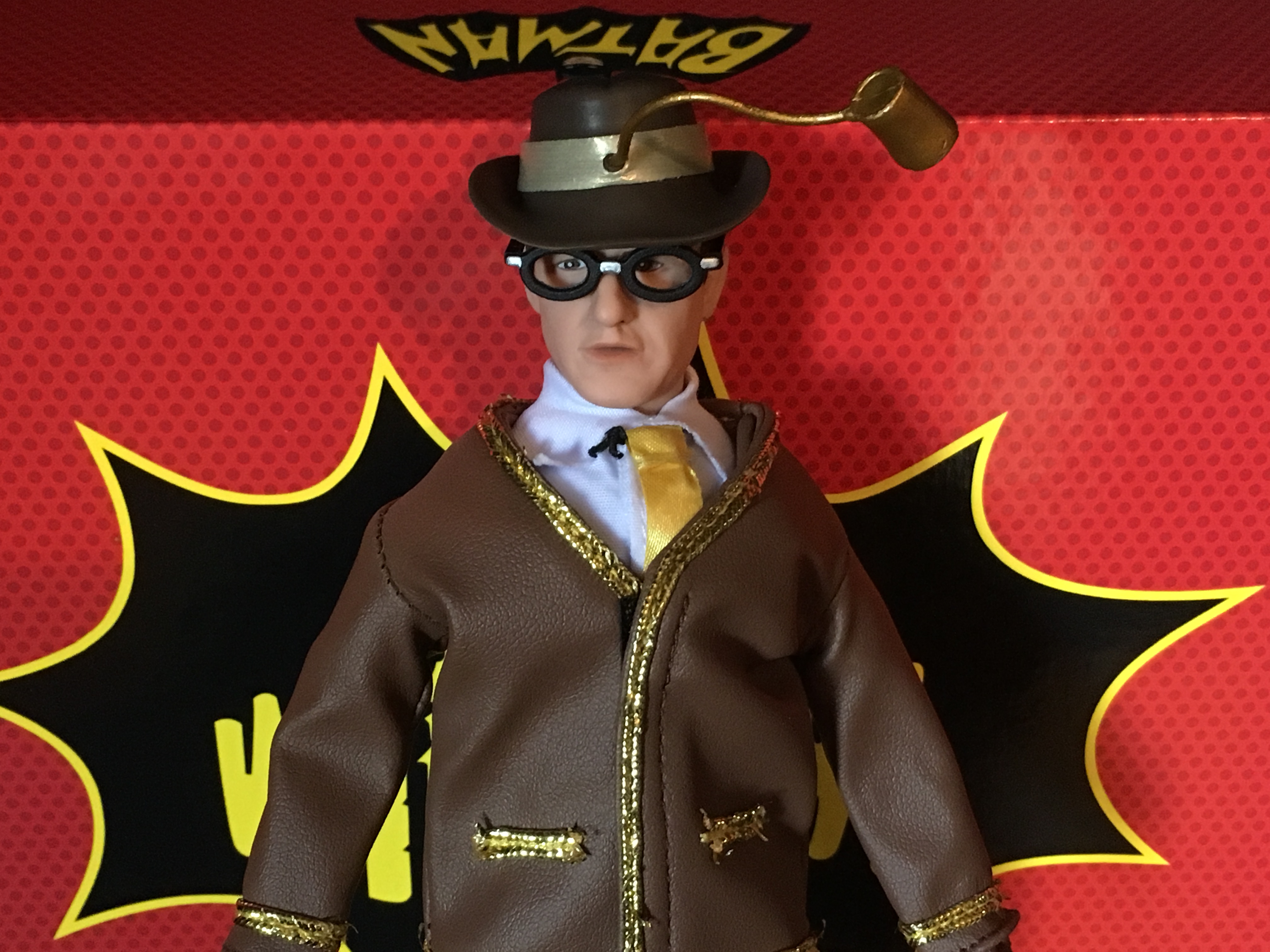 By the way, when I recently rounded up readers’ suggestions for Batman ’66 variants, someone suggested a Bookworm with a working reading lamp. Very clever. 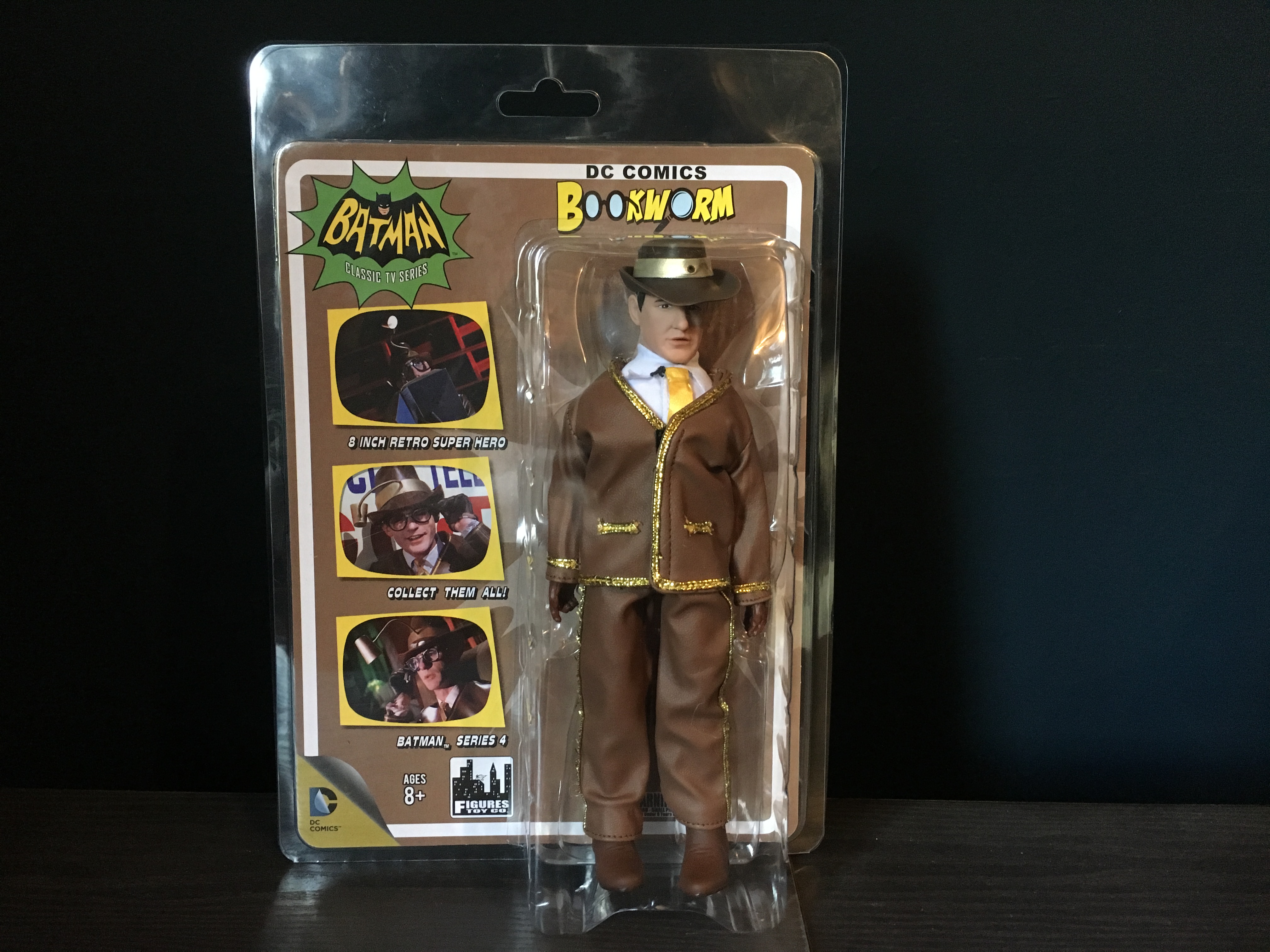 Overall, it’s a very good figure, but I compare Bookworm to Shame, to some degree: Both are characters I got because I want at least one version of each character in this line. Roddy McDowall’s in the license, so here he is. But seeing him just reminds me that there are others I’d rather have instead, like Commissioner Gordon, Lee Meriwether Catwoman, George Sanders Mr. Freeze, even Walter Slezak’s Clock King. 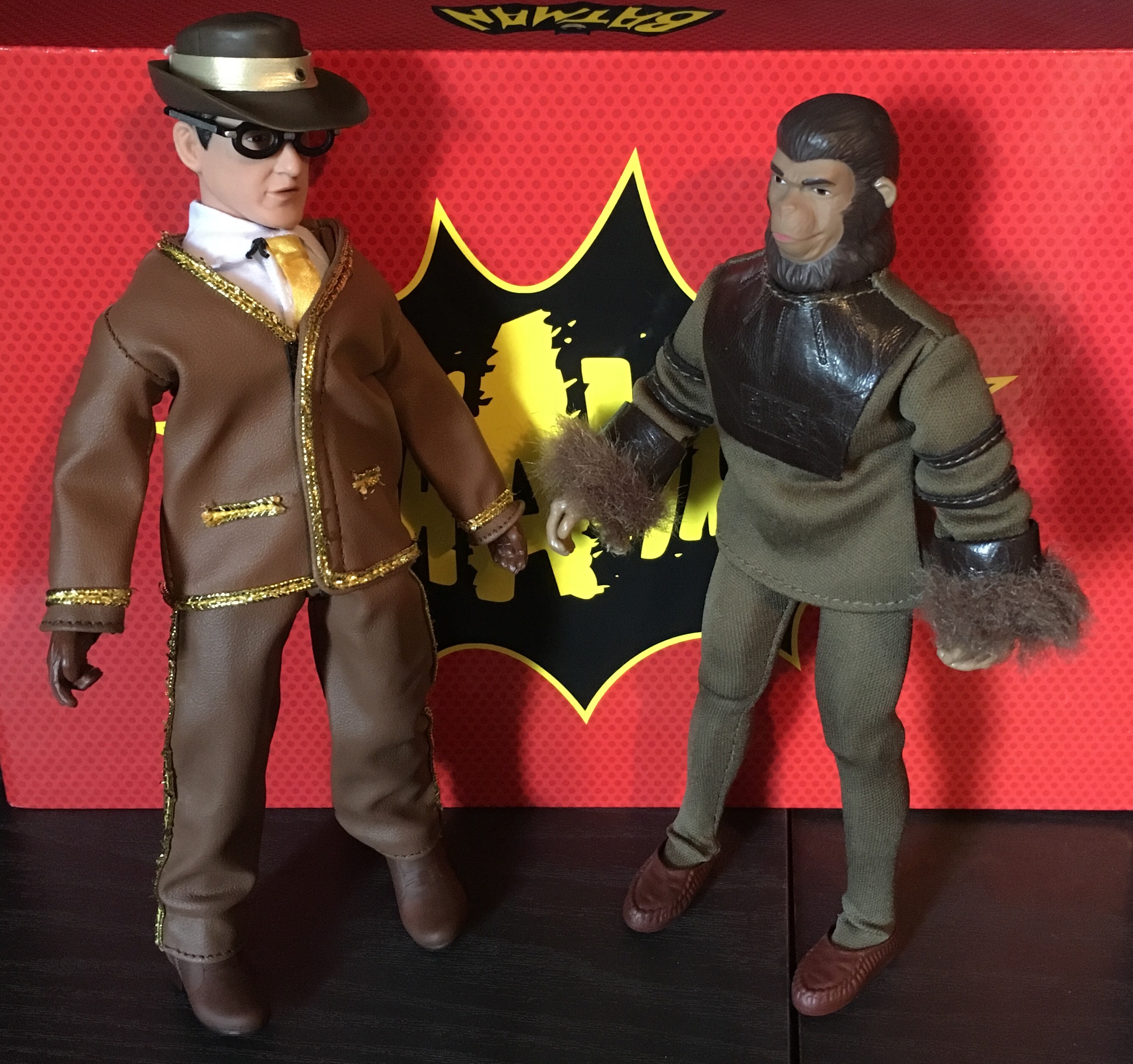 Ah, King Tut. The Nabob of the Nile.

I’ve gone on record as saying that I couldn’t stand King Tut as a kid. Really didn’t like him. But now he ranks at the top of my list of the TV-only villains.

My Egyptian gods, Victor Buono was brilliant, absolutely brilliant as Tutsy. I’m kind of chuckling to myself just thinking about it. Now, about the figure:

I think this is one of Figures Toy Company’s strongest efforts of all. Tut is not an easy character to emulate because there are so many details and different materials in his colorfully garish costume (one that would change, too). 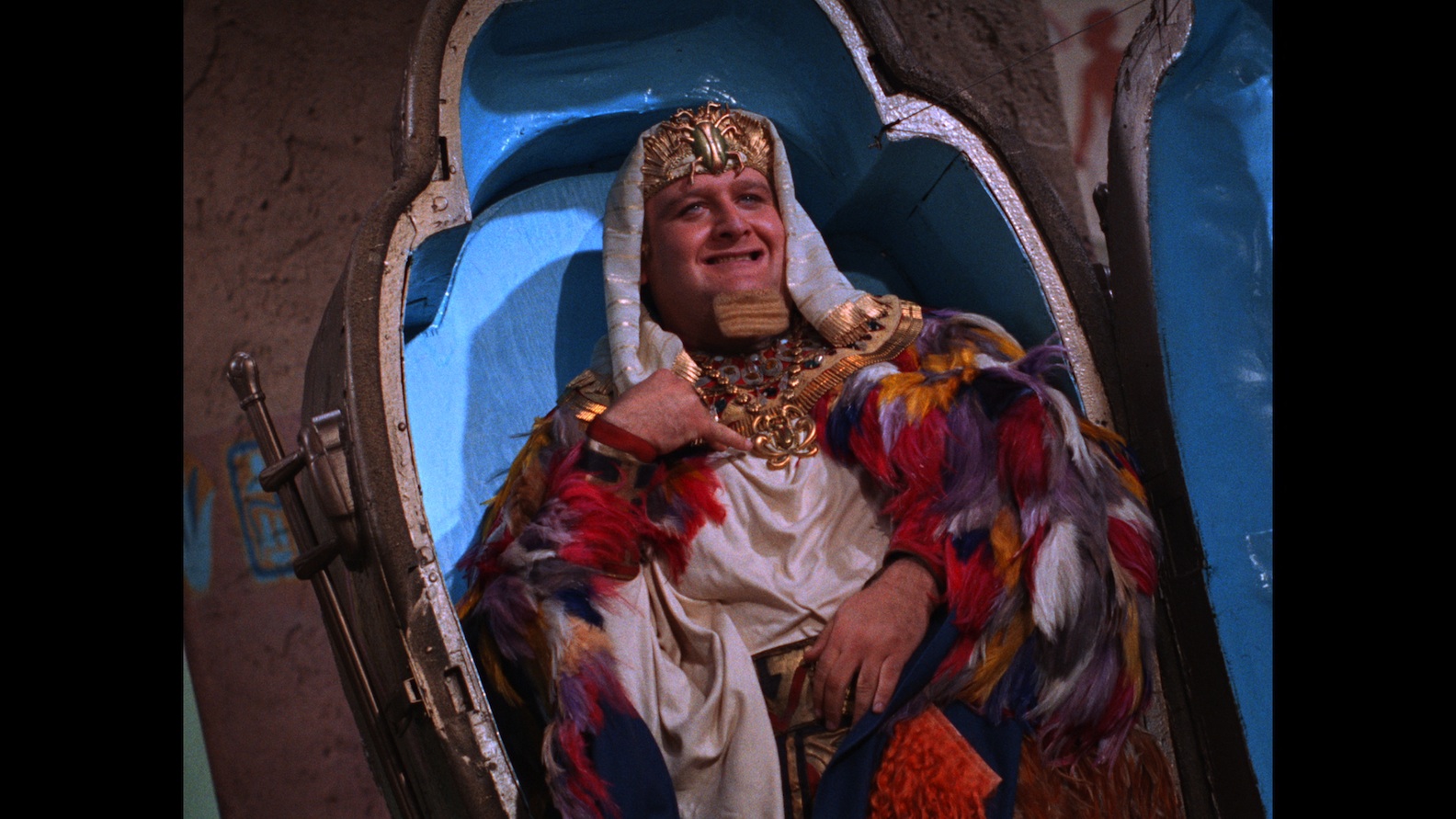 But FTC made a truly game effort trying to replicate all the details and colors just so, and really, they hit it as best as they could in an 8-inch scale. They didn’t even cheat on his sandals.

If I sound muted it’s only because Buono was not just hefty, he was obese. And trying to capture his bulk is difficult at this level, though I think Figures Toy Company gave it their all. 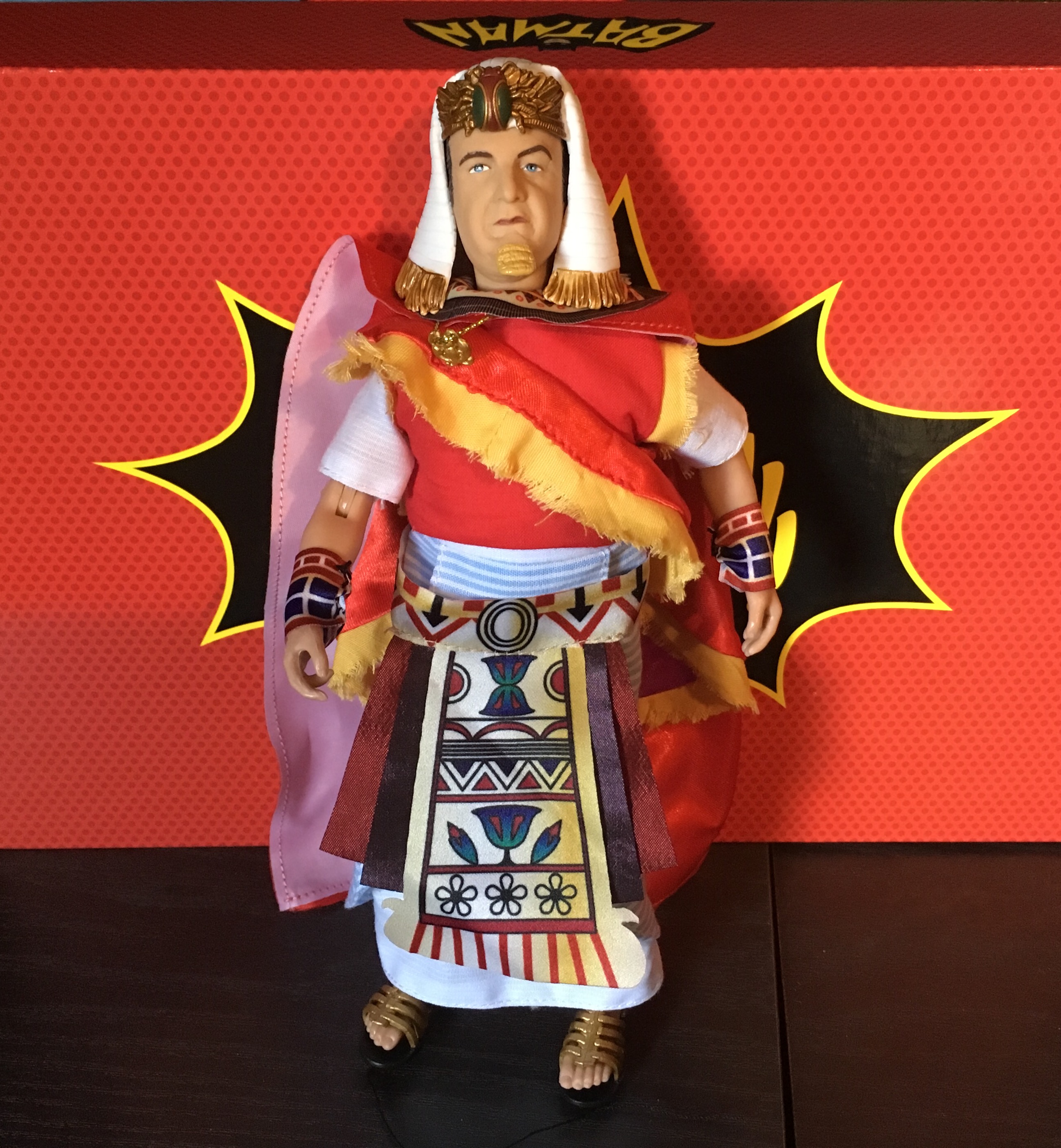 I don’t think the facial expression quite measures up to some of FTC’s other work (like Mr. Freeze or Alfred as shown above, or Egghead, as we’ve shown elsewhere). 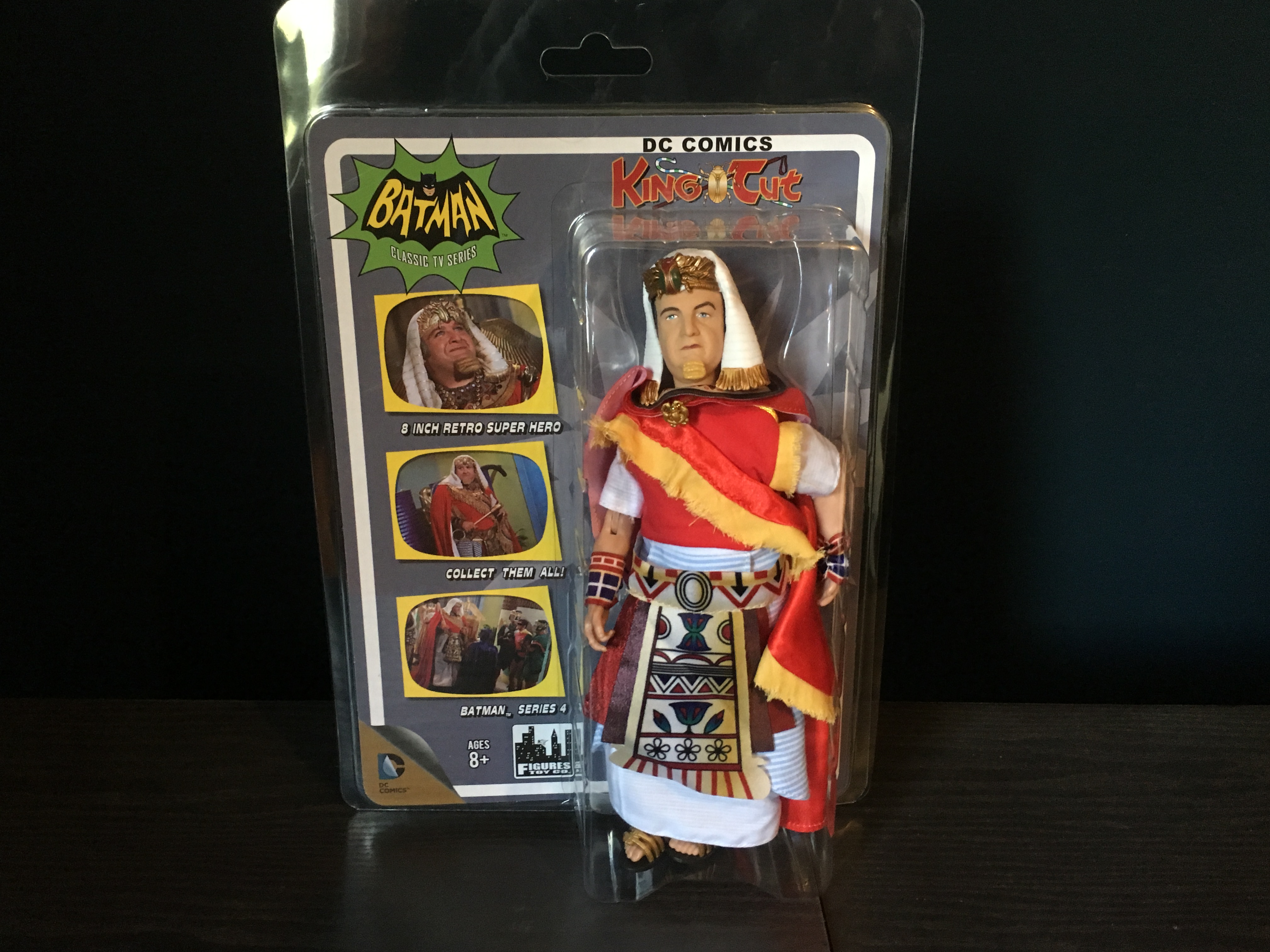 But again, I have a hard time criticizing a company that’s given so much to the world of Batman ’66. Seriously, just a few years ago, this whole line was nothing but a fever dream and what FTC’s done is extraordinary. 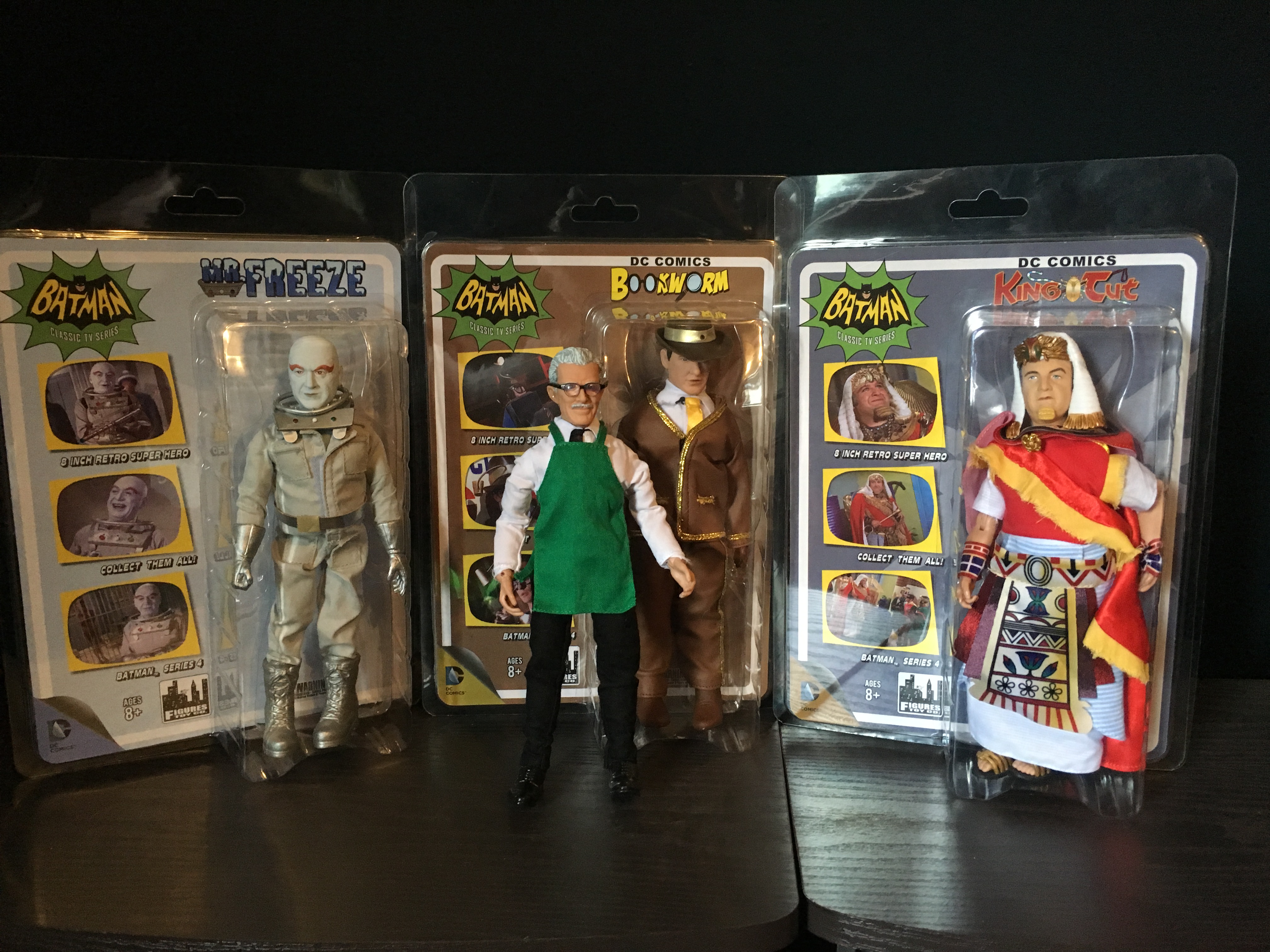 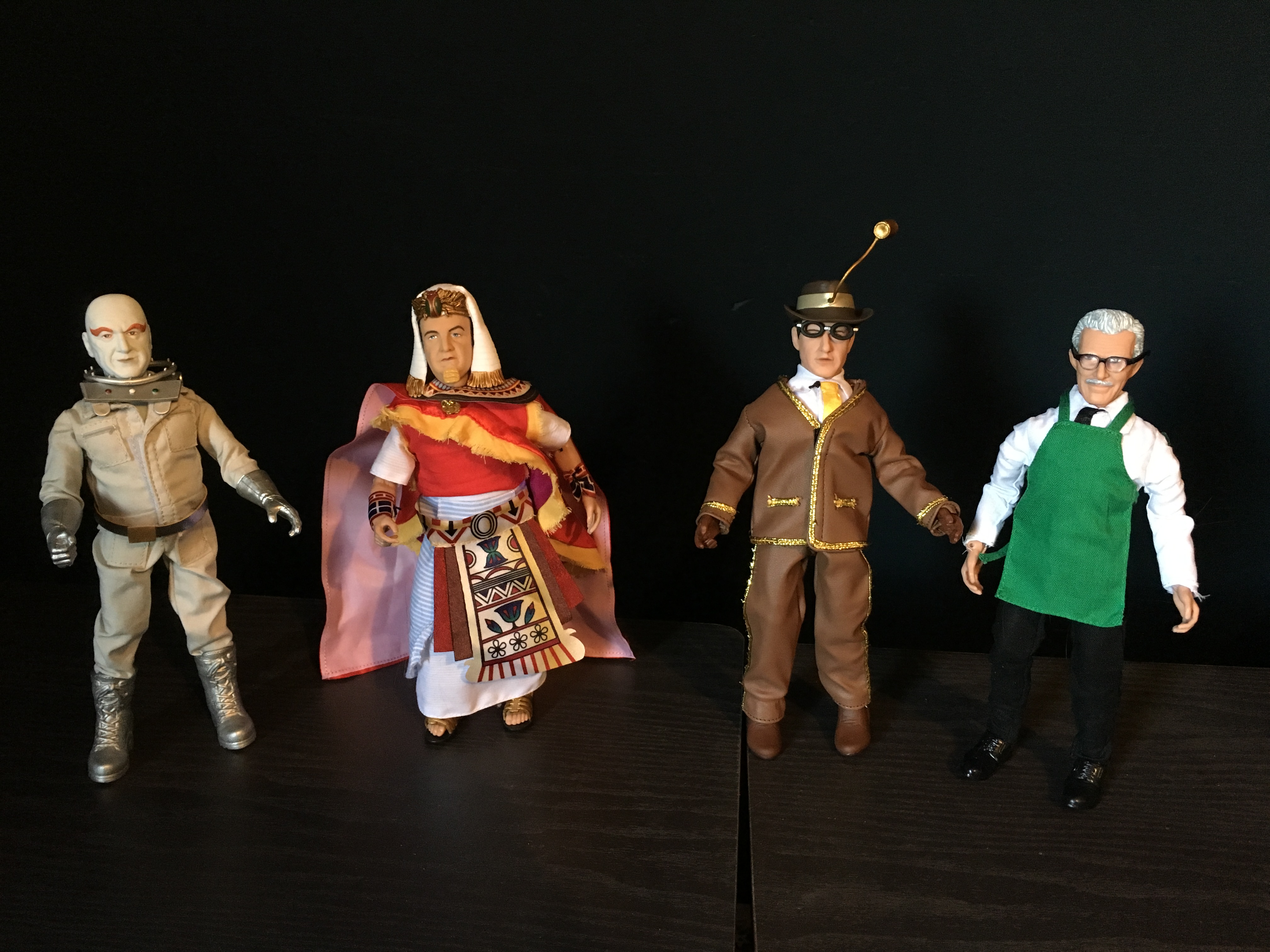