This week, it’s Ron Marz, who has written for pretty much every publisher under the sun but is best known for co-creating Green Lantern Kyle Rayner with artist Darryl Banks.

Now, last time in RETRO HOT PICKS, it was books that went on sale the week of June 24, 1973, and our guest was former DC chief Paul Levitz. (Click here to check it out.) This time, it’s the week of July 1, 1985. (Keep in mind that comics came out on multiple days back then — as has become the case now. So these are technically the comics that went on sale between June 28 and July 4.)

So let’s set the scene: Ronald Reagan was in his second term as president. Clint Eastwood’s Pale Rider rode atop the box office — but would soon be displaced by Back to the Future, which pretty much ruled the summer. The top show on the tube was a TV movie called Policewoman Centerfold, starring Melody Anderson, which is about exactly what you think it is. And Bryan Adams’ interminable Heaven led the Billboard 100.

The mid-’80s was a time of renaissance in comics, with Watchmen and Dark Knight Returns defining the era. It was also when I re-discovered comics, with titles like Miller’s Daredevil and Simonson’s Thor leading me to other Marvel titles, and then on to DC and independents. This week is right in my wheelhouse, around the time I started making regular trips to the nearest comic shop, October Country in New Paltz, NY.

The Rocketeer TPB, Eclipse. Still have my original copy collecting the Dave Stevens pulp masterpiece. The Rocketeer chapters were some of my first forays into non-Marvel/DC comics, and it’s still some of my favorite material ever. I don’t think there’s ever been a more beautiful comic. 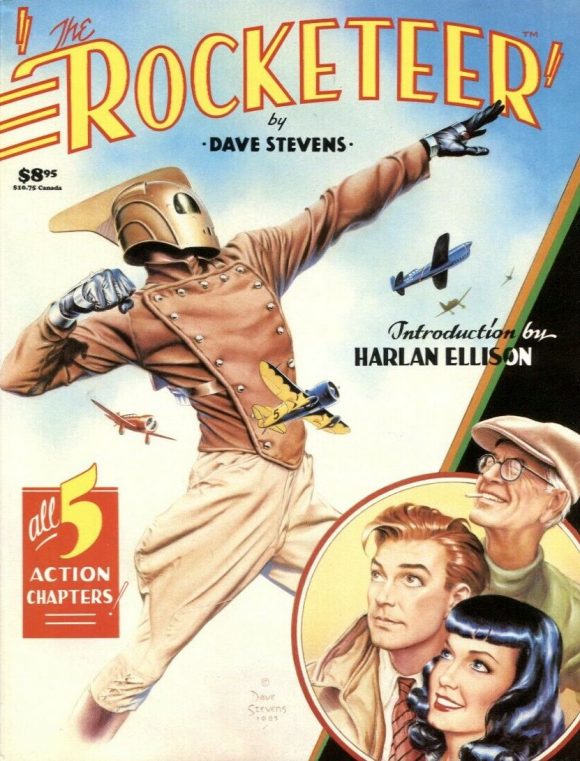 Scott adds: I didn’t discover this until a couple of years later, after I’d encountered Dave Stevens’ work on the covers of Airboy. But when I did, it was a revelation. A brand-new work that seemed like it had fallen through time from the 1930s. Cleverly written and beautifully drawn, it’s a book I still gift to friends today.

Doctor Strange #73, Marvel. As much as I love all of Doctor Strange, and in particular the Lee-Ditko originals, the Roger Stern-Paul Smith run on Doc will always be my favorite. Magical (no pun intended) stories that balanced sorcery and humanity, with exquisite art. 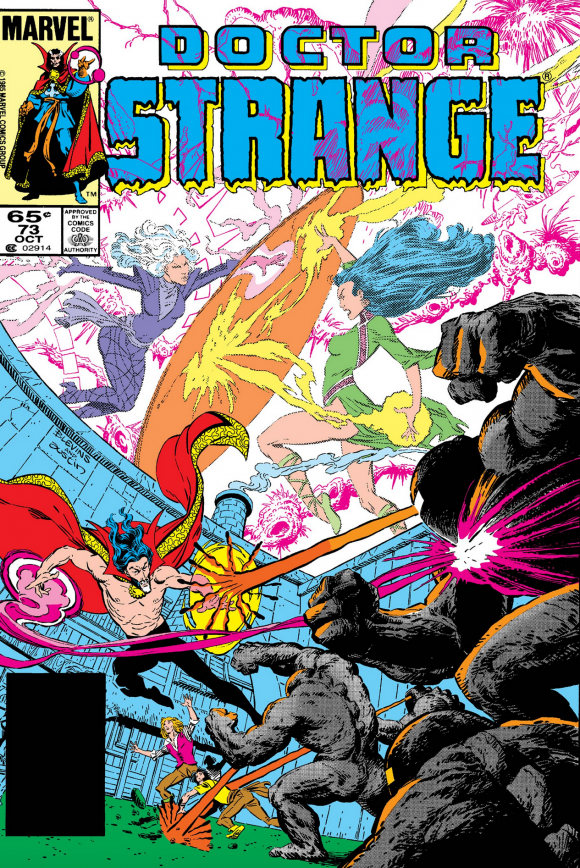 Longshot #2, Marvel. I remember Arthur Adams appearing on the scene and just blowing everyone’s eyes out of their heads with Longshot. Who was this guy? Where did he come from? How does he DRAW like that?! All these years later, we’re still asking how he draws like that. (Written by Ann Nocenti.) 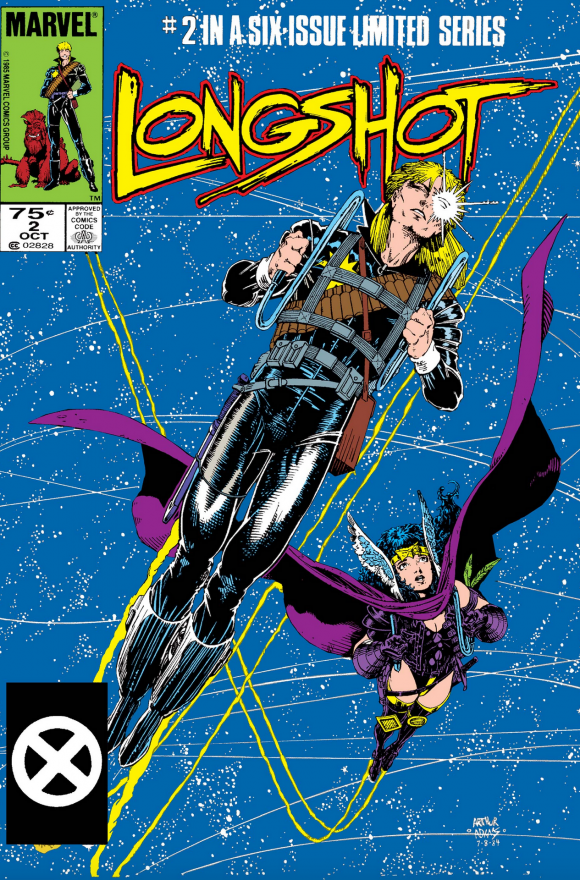 Savage Sword of Conan #116, Marvel. Even when I put aside comics as “kids’ stuff” for a few years, I always bought Savage Sword when I could find it on the supermarket magazine rack. When I fell back into superhero comics, I kept up my Savage Sword habit. I don’t have much recollection of the interiors of this issue, but by Crom, I remember that Sienkiewicz cover! 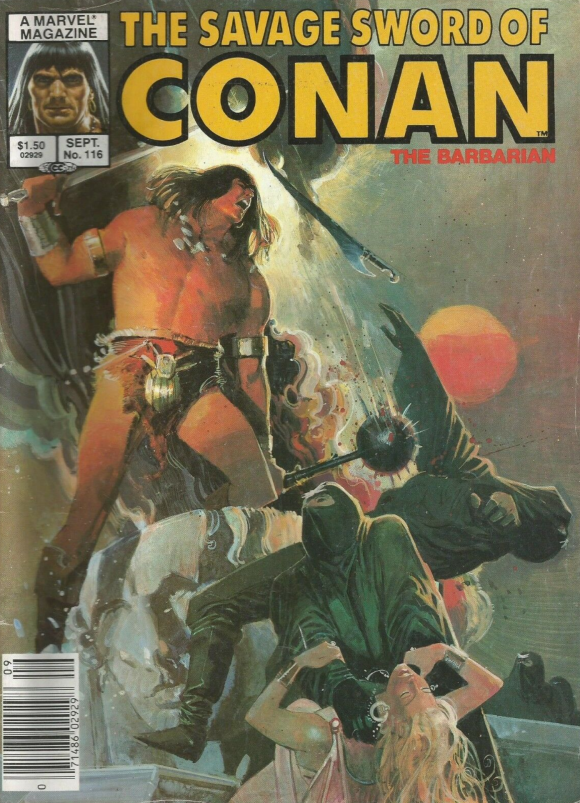 Crisis on Infinite Earths #7, DC. Because of course. Even though it’s been retconned a gazillion times since, the death of Supergirl by Wolfman and Perez was a Big Deal in 1985. Hell, ALL of Crisis was a Big Deal. Still is. 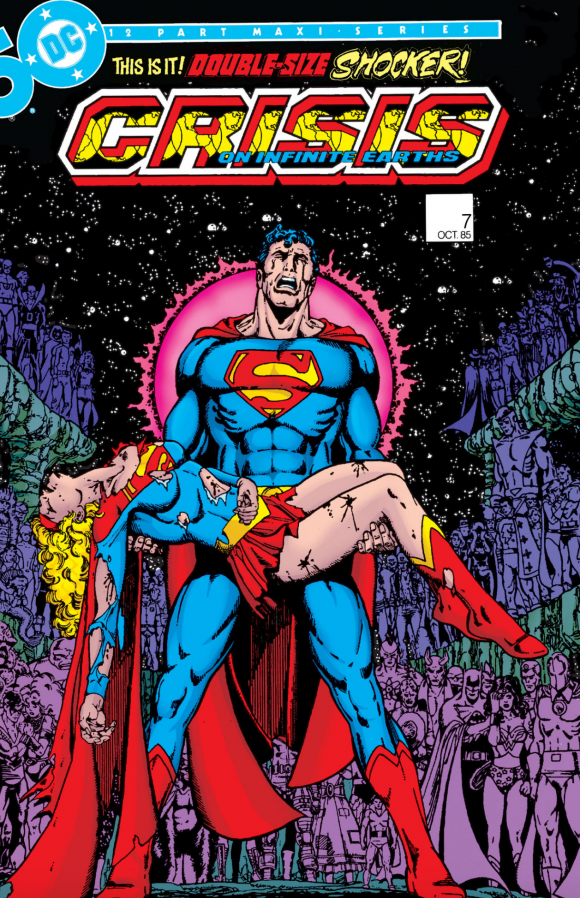 Scott adds: What can I say? This one rocked me to my core. Remember, in those pre-internet days you had no idea what was coming down the pike in comics; you never saw covers till you got to the comic shop — you could truly be surprised. Shocked, even. I couldn’t believe they did this, and yet I truly believed it was permanent because it was executed so well and they took it so seriously. There’s a little part of me that’s never gotten over it. This really was the end of innocence for comics for me.

Ron adds: The cover that’s been homaged a hundred times! I grew up reading mostly Marvel books, so his huge dose of DC continuity was sometimes impenetrable for me. But I loved that epic Perez art! Crisis set the bar for all the crossovers that came after it.

Deadman #6, DC. Before trade paperbacks became the norm, DC reprinted some of its best material as miniseries on Baxter paper. This collected Neal Adams’ ever-popular Strange Adventures run from his early days at the publisher. (By the way, want Adams’ views? Click here.) 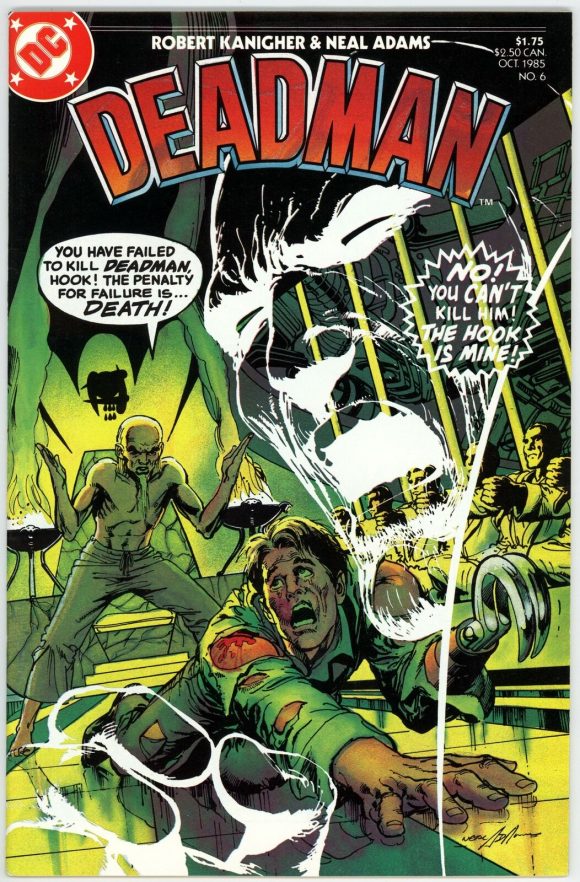 Fifty Who Made DC Great, DC. I can’t remember whether I got my free copy of this promo at the comics shop (probably) but this was a retrospective of DC’s first half-century, told through the stories of a broad array of influences, from Siegel and Shuster to Adam West and Burt Ward to Emile Keirsbilk, the publisher of DC Comics in France. Like I said, it’s a “broad array.” 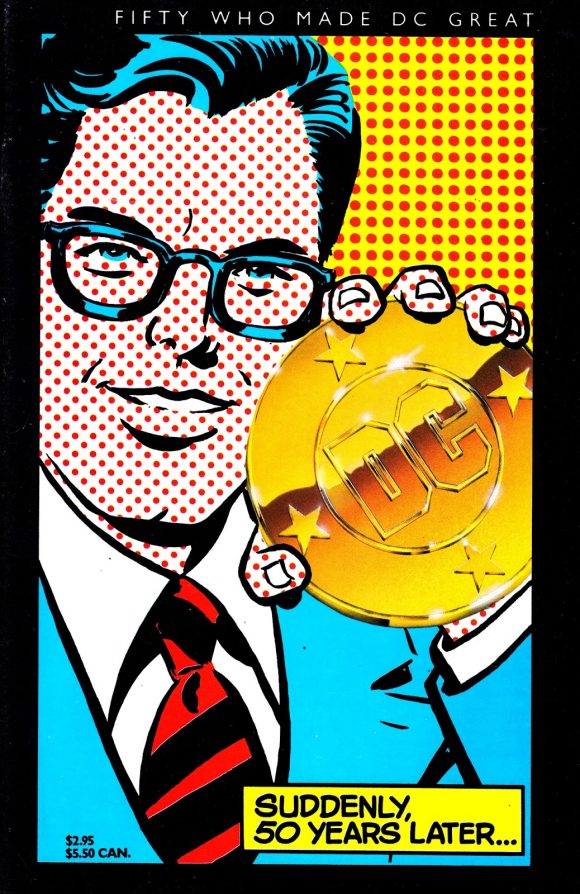 Mighty Crusaders #13, DC. I don’t remember ever seeing the Mighty Crusaders at my shop in 1985. If I had, I just might have taken a chance on it because I’ve always had this curiousity about this shared superhero universe that is so much like DC and Marvel, yet different at the same time. (By Rich Margopoulos, with art by Dick Ayers and Mike Esposito.) 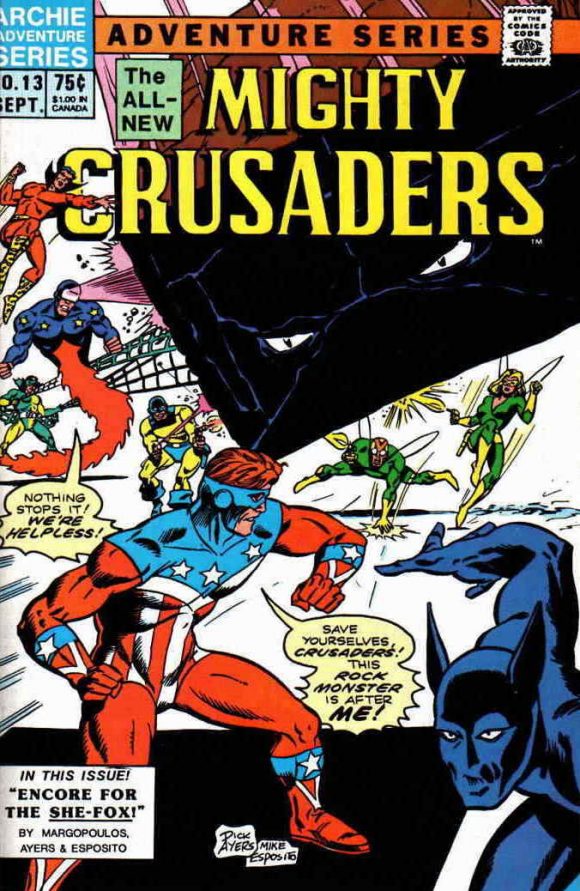 The Amazing Spider-Man #269, Marvel. Maybe my favorite “new” Spidey book of my childhood, in which a desperate Spider-Man finds himself way out of his league battling a herald of Galactus all across Manhattan. It also was the foundation of a theory my brother and I postulated at the time: “Spider-Man can beat anyone.” (Written by Tom DeFalso and pencilled by Ron Frenz.) 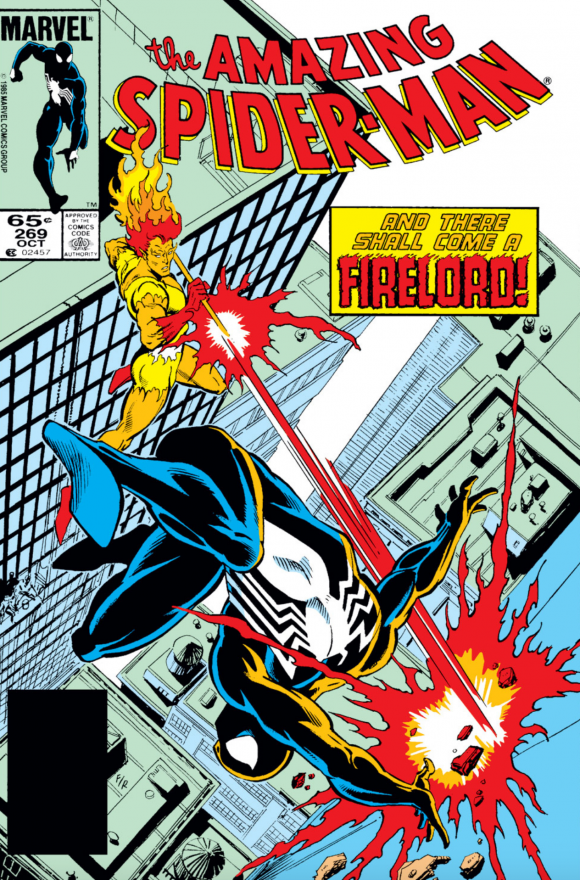 Captain America #310, Marvel. One of my favorite things writer Mark Gruenwald did over his lengthy run on Cap was the slow introduction and rise to prominence of the delightfully silly but still formidable Serpent Society. I just loved the notion that there were so many independently operating snake-based supervillains running around, and somebody got the idea to unionize them. (Art by Paul Neary and Dennis Janke.) 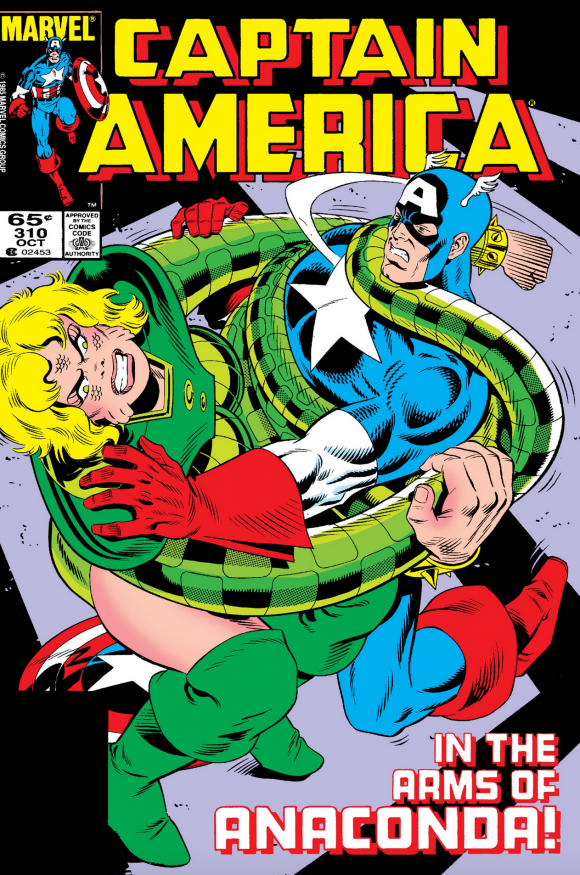