Scott and Dan — with special guest David Avallone — hit up the comics racks from 35 years ago!

This week for RETRO HOT PICKS, Scott Tipton and I are joined by writer David Avallone, co-writer of Dynamite’s Elvira series, among other kitschy fare like Bettie Page.

(Keep in mind that comics came out on multiple days back then — as has become the case now. So these are technically the comics that went on sale between Nov. 22 and Nov. 28.) 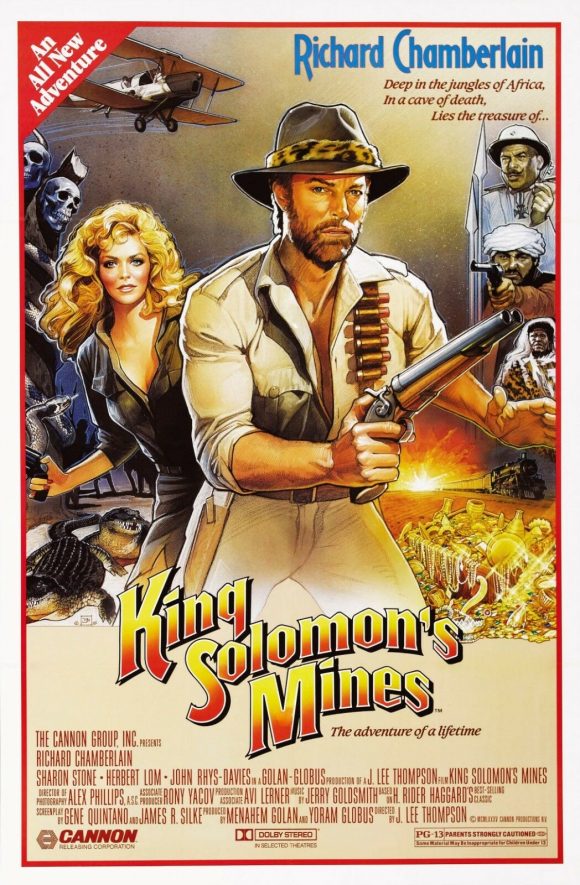 President Reagan was in his second term. The TV movie Perry Mason Returns, starring Raymond Burr in his most famous role, burst through The Cosby Show’s dominance to finish atop the weekly Nielsens. Then again, it looks like there was no new Cosby Show ep that week. But, hey, a win’s a win and the movie’s success led to a whole new run of Perry Mason movies that lasted into the ’90s. (Gerry Conway wrote the last one!)

King Solomon’s Mines, based on the 1885 novel and a ripoff/parody of Indiana Jones, was No. 1 at the box office but that’s not saying much: the “haul” was barely $5 million. On the other hand, the outlandishly jingoistic yet ludicrously entertaining Cold War fable Rocky IV destroyed all comers the following week. (2018’s Creed II did a fantastic job of redeeming this Stalloneapalooza. See it.) Separate Lives, by Phil Collins and Marilyn Martin, led the Billboard 100 and I swear to you I have no idea how this song goes. If I’ve heard it, I’ve forgotten it, and I have no intention of going back to it. The Miami Vice soundtrack was the best-selling album. This was Peak ’80s, folks.

(Note from Dan: David was so enthusiastic, we let him bend the rules and pick not just comics that came out this week but those that were still on the racks. We’re nice like that.)

Ah, 1985. I was 20, going to Bard, and I think I had to drive down to Iron Vic’s in Poughkeepsie to get my comics. (I think I’m remembering the name right? It was a long time ago, kids.) Still, in spite of the effort required, I was reading a lot of comics. The thing you will quickly discover is I didn’t read a lot of superhero comics at the time. Sure, I read Watchmen and Dark Knight Returns when they came out the next year, but my heart belonged to Love and Rockets and Dreadstar and American Flagg and Mage and ZOT! and TMNT and all sorts of non-cape comics. So here’s what I picked up: I’ll do them in the order I probably read them when I got home from Poughkeepsie — from least exciting to most exciting.

Who’s Who #12, DC. Did I mention I wasn’t reading a lot of cape comics? I bought the Who’s Who series because they helped me out when I would dip into DC superhero books and thought “who the Hell is that?” This was also during the Crisis on Infinite Earths run, which was the biggest collection of “who the Hell is that?” moments in my comics reading to that point. This was long before the internet. You kids don’t know how good you have it with your Googles and your databases and whatnot… 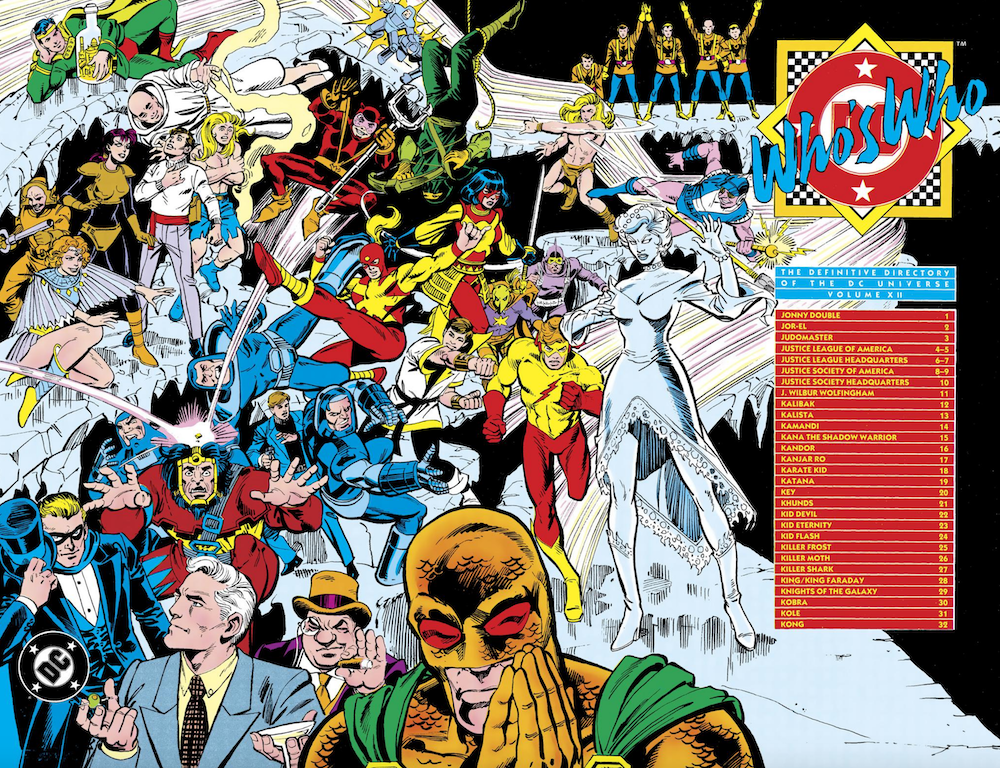 Sgt. Rock #408, DC. Rock wasn’t my favorite DC war comic… that honor goes to The Unknown Soldier (in particular, the David Michelinie/Gerry Talaoc issues). I had gotten into reading Sgt. Rock when I was a little kid, possibly inspired by the fact that my dad had been a sergeant in WW2. Dad was funny and a wise-cracker — way more Fury than Rock — but the grim Rock was also a great comics character. Additionally, I was blown away by Russ Heath’s amazing photo-realistic art. He could stage action like no one else. This particular issue is typical of Robert Kanigher’s downbeat stuff for the DC war books: A young cartoonist — a tribute to real-life comics legend Shelly Mayer — joins Rock’s Easy Co. and experiences nightmarish combat, with the result that his sweet little comics turn into bleak abstracts. Andy Kubert, just a few years older than me, follows in his amazing father Joe’s footsteps, and supplies a vivid and iconic war story. 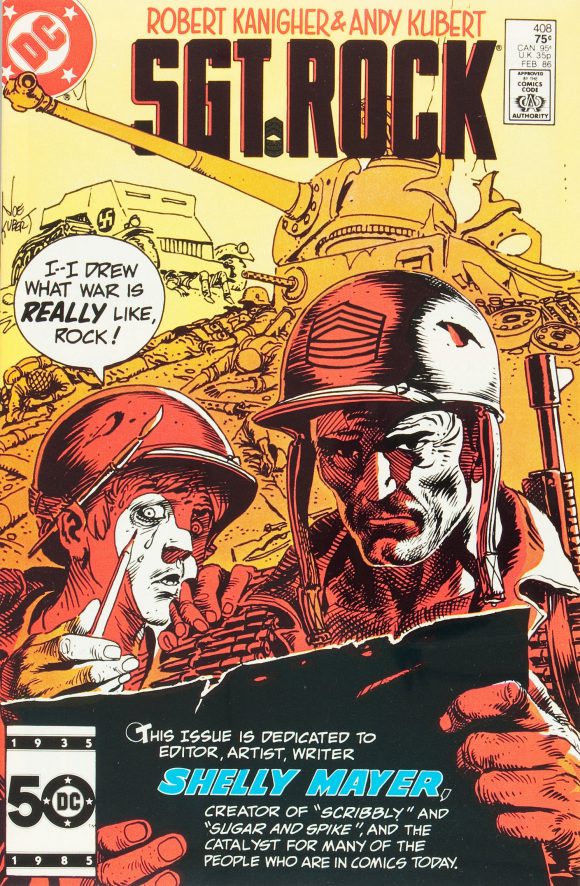 Warlord #102, DC. I was a big Mike Grell fan (see below) and Warlord had started out as his baby. But by this issue he was just a cover artist and the thing was running on fumes. No disrespect to the creative team, but Grell’s vibe as a writer – and his art – were not replaceable. I was still buying this out of entropy, and I can’t say I remember anything about this issue. What was Mike Grell up to, that made him too busy to write and draw Warlord? Glad you asked… 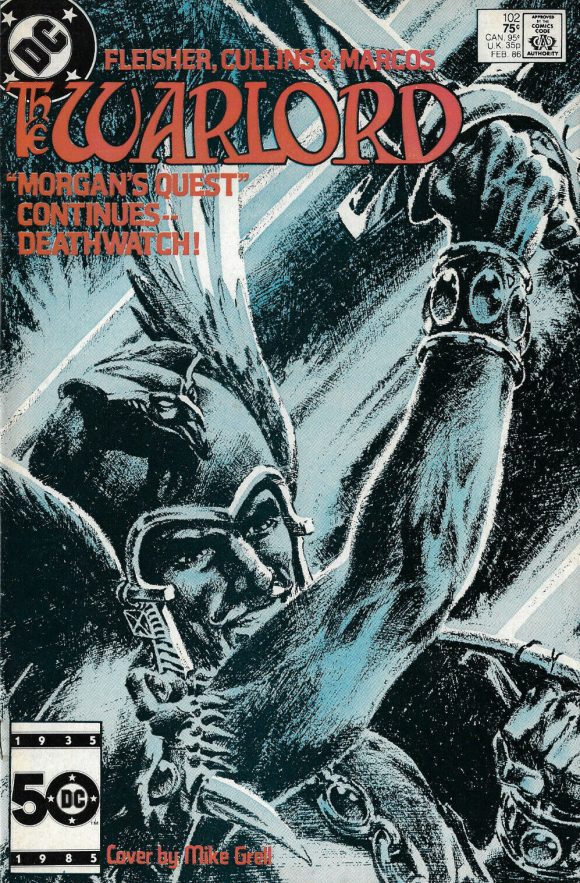 Jon Sable, Freelance #34, First Comics. Grell had turned his creative energies toward this book, starring a character who was something from a 1970s paperback series, with a touch of James Bond and a touch of the pulps. This was a very entertaining comic, a good, solid popcorn movie kind of read. This issue in particular is a standout: Sable seems to be going on a simple hunting trip with a wizened old guide. Almost every other page-turn opens up to another stunning two-page spread. Lots of silence, and letting the art speak for itself, as Sable learns from the Yoda-like guide… and then poachers, killing endangered Selkirk caribou with machine guns. Oh wait, not just poachers. Nazi poachers, with a white supremacist compound and a beautiful captive. Guess you’ll have to come back next month and see Jon Sable wade into that compound and do some Nazi-killin’. In researching this article, I found a reference that this was First Comics’ first “Baxter Paper” issue of Jon Sable Freelance. Once upon a time, comics were printed on a pulp paper that played havoc with art. In the mid-’80, companies experimented with charging a little more for better paper and better looking comics, in a way that’s the standard now. Grell’s work benefitted from it, and deserved the deluxe presentation. Grell doesn’t get his due for his part in the comics renaissance of the mid-’80s, and this comic is a reminder of how great he was at the height of his powers. Dig some of these up and read them: you won’t be disappointed.

Swamp Thing #45, DC. I had started with Swamp Thing in the Wein/Wrightson days, and kept going. I had enjoyed Martin Pasko’s excellent run when the series was restarted, and then Alan Moore came along, as everyone knows, and did the smartest and best re-imagining of a character origin in the history of comics. A thousand hack “everything you thought you knew is wrong” stories followed — from people who lacked Moore’s imagination and inventiveness, but you can’t blame him for that. Len Wein’s origin story was perfectly fine comic book writing, and created the haunting premise of a man turned into a monster, mourning over and seeking to regain his lost humanity. The genius of Moore is that beyond simply turning that premise on its head, he came up with an even more haunting story: the humanity couldn’t be regained because it was never there. It was a mere echo. 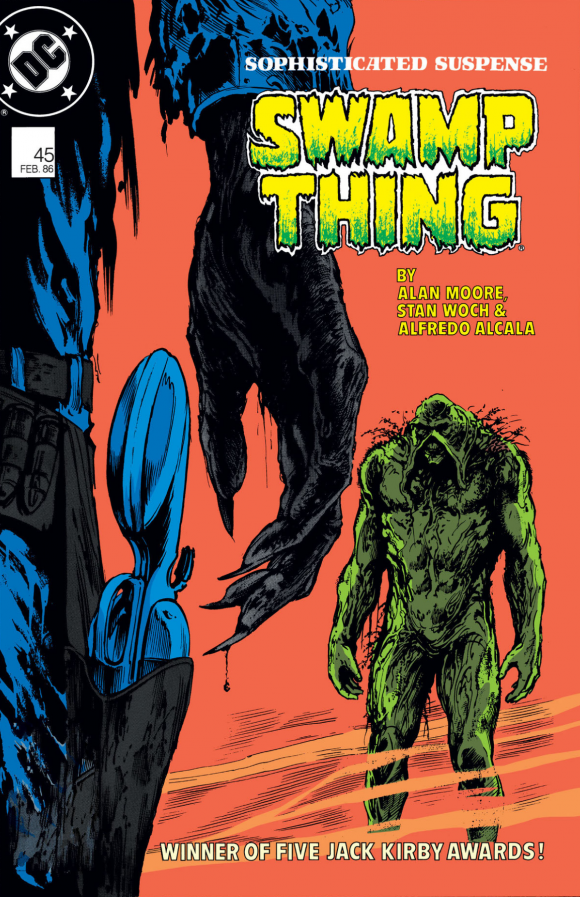 Twenty-plus issues after that shattering story, Moore was still going strong. In this issue, he uses the true-life tale of the Winchester House and its haunted, never-ending construction
as the backdrop for another encounter with the all-American heart of darkness. Moore renames the Winchesters the Cambridges (hard to imagine the Winchester family would sue, but corporations like DC don’t like to take risks) and drops four teenagers out of an ’80s slasher movie into the mix. This, like the other Moore comic below, is one of the issues from that month that has stayed with me forever. The art by Stan Woch and Alfredo Alcala is appropriately gothic and creepy. I was surprised, looking at this again, to find that it wasn’t Bissette/Totleben: In my memory they had done all of these but it turns out the other art teams who jumped in carried the style off perfectly.

Miracleman #3, Eclipse Comics. Is that a Howard Chaykin cover? Yes. Yes it is. I was already buying this book, and loving it, and the Chaykin cover was just icing on the cake. (I don’t see this cover in the collected edition Marvel put out a few years ago, so I can only assume they failed to hold onto the rights to the image. Glad I kept my floppies.) This was that period when everything Alan Moore wrote was gold, and you couldn’t miss any of it. Unbeknownst to us Yanks, this was a reprint of older material from Warrior magazine in England, which explains the odd chapter breaks carried over from shorter episodes. This issue also has a back-up Warpsmiths story that I remember being impressed with at the time: It felt like it had the depth of literary science fiction as opposed to the pulpier stuff you’d see in comic books up ’til that time.

The main Miracleman story is another one of those unforgettable comics from the period: Moore took the superhero battle to a new, horrifying level, and this comic — in particular the gory, horrifying fight between Miracleman and the grown-up evil Kid Miracleman — is in the DNA of every gritty ultraviolent comic you’ve read since it was published. The art, by Alan Davis and Garry Leach, is stunning.

So that’s what I read, in late November of 1985… a junior in college, decades from writing comics professionally and not a thought in my head that would be my career someday. Life’s funny, ain’t it? Thanks for joining me on the stroll down memory lane.

The New Mutants #37, Marvel. I was still a big fan of New Mutants at this point, but this was where the series went into a funk from which it never recovered. Secret Wars II was inferior to the first in so many ways, not the least of which was its many crossover issues, which often did more harm than good to the ongoing series they appeared in. This issue, in which the Beyonder murders the entire cast, is a prime example. 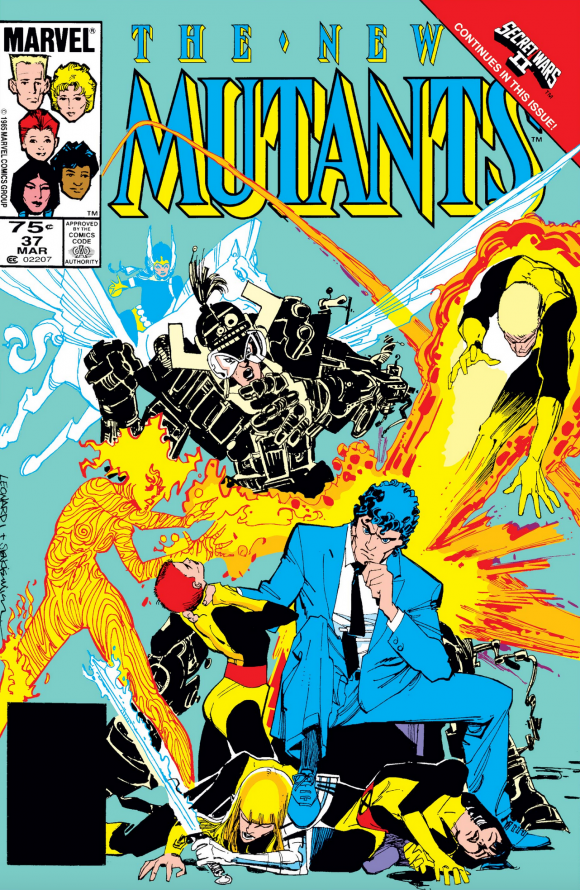 Squadron Supreme #7, Marvel. Mark Gruenwald’s epic about Marvel’s analogue to the JLA was in full swing by this time, and I was hooked. Every issue got crazier and more intense than the last, as the heroes of the Squadron make the slippery slope into dictatorship and fascism. 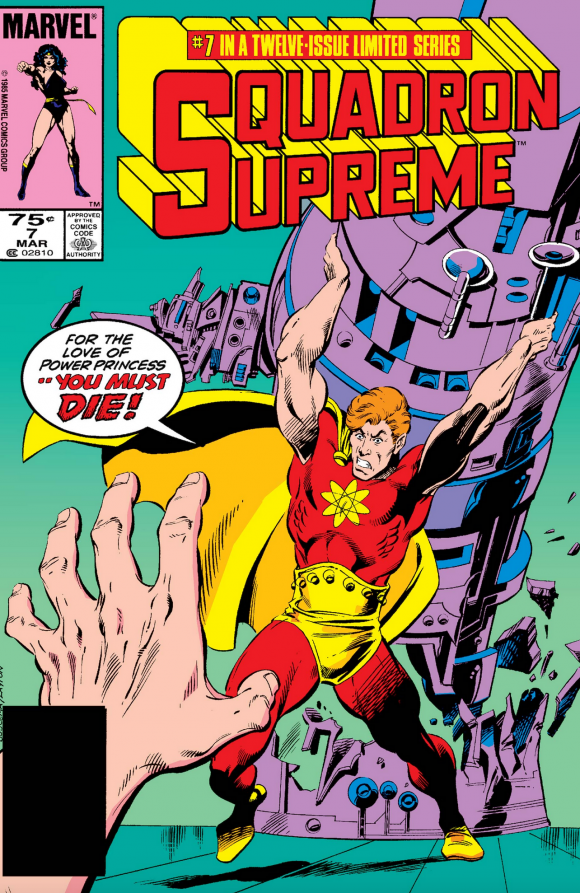 West Coast Avengers #6, Marvel. We take a deep-dive into Tigra’s origins here, and WCA never looked better than when it had Kyle Baker on inks. 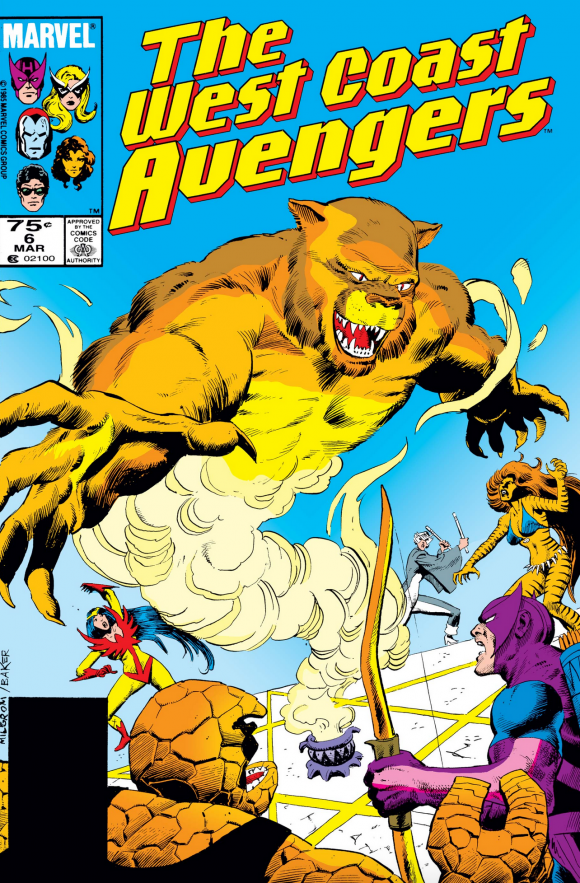 Ambush Bug Stocking Stuffer #1, DC. Panel for panel, there was never a funnier comic book than Ambush Bug. Written and drawn by Robert Loren Fleming and Keith Giffen, Ambush Bug was equal parts superhero surrealism and comics metacommentary. It was capable of remarkable heart — as well as a hilariously vicious mean streak. Track ‘em down. 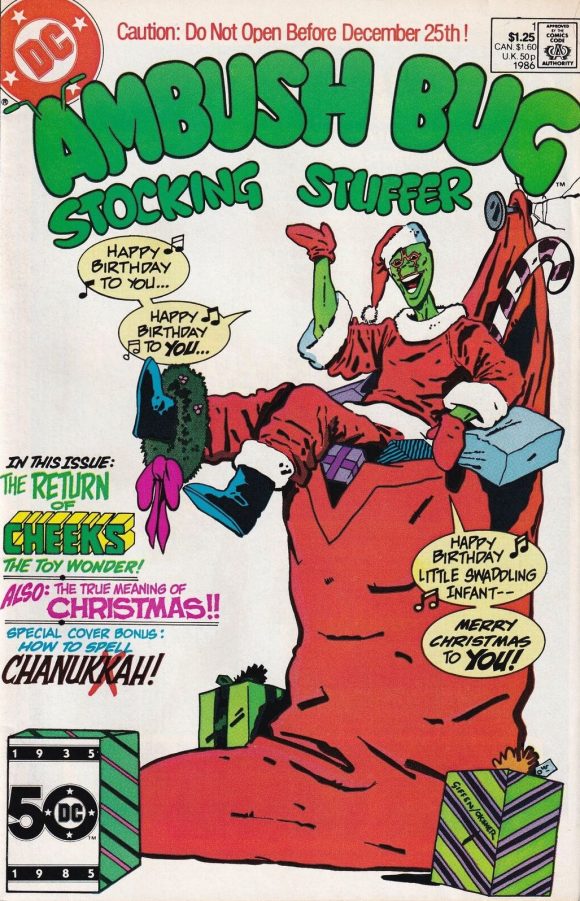 Daredevil #228, Marvel. I didn’t read Miller and Mazzucchelli’s Daredevil when it came out because this was when — even at 18 — I still wasn’t mature enough to read both DC and Marvel. (How stupid.) Of course, I’ve read it since and my lord. What can I possibly say about it that hasn’t been said? 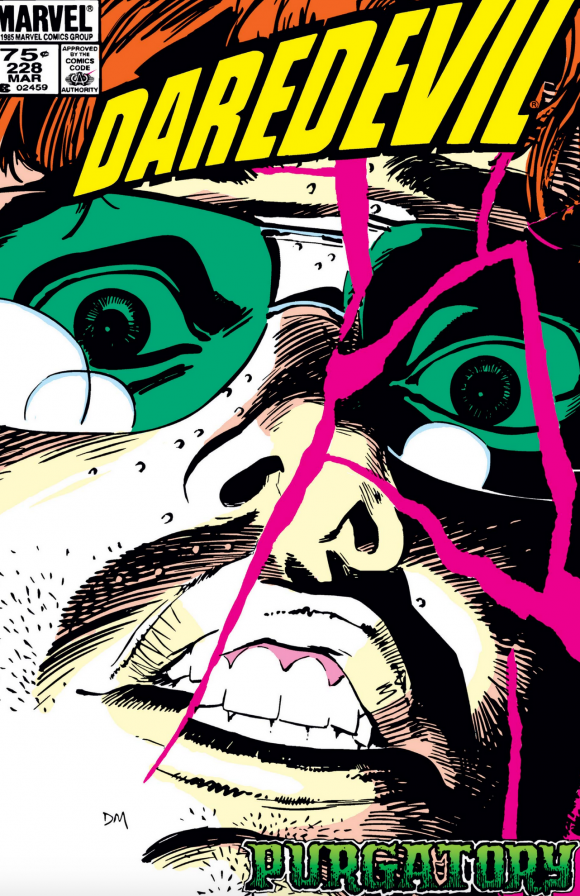 All-Star Squadron #54, DC. Boy, in retrospect, Crisis didn’t do the JSA any favors, did it? They really deserve their own place in the Multiverse, and not to be shoehorned into whatever mainline DCU there is at any given moment. Earth-Two Lives! Detective Comics #559, DC. I don’t remember a thing about this issue by Doug Moench and Gene Colan and I’m only up to 1975 in my Silver/Bronze Batman/Detective re-read. But I’ll get there eventually, and I really want to re-examine this period. Either way, I dig the Batman/Catwoman vs. Green Arrow/Black Canary idea. (Because You DEMANDED It!) 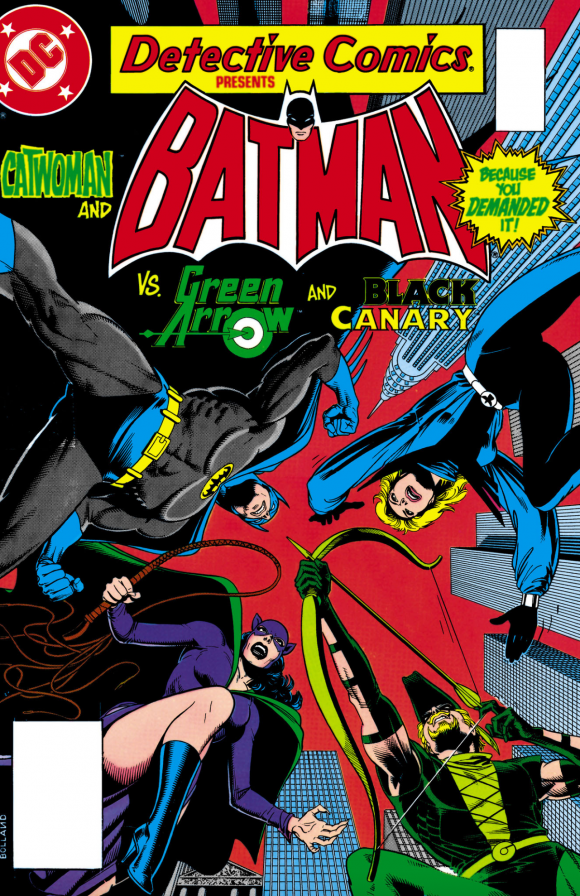