Scott and Dan — with special guest Ryan Dunlavey — hit up the comics racks from 37 years ago!

This week for RETRO HOT PICKS, Scott Tipton and I are joined by artist Ryan Dunlavey, co-creator of The Comic Book History of Animation miniseries with Fred Van Lente that debuts Dec. 9 from IDW.

(Keep in mind that comics came out on multiple days back then — as has become the case now. So these are technically the comics that went on sale between Nov. 29 and Dec. 5.) 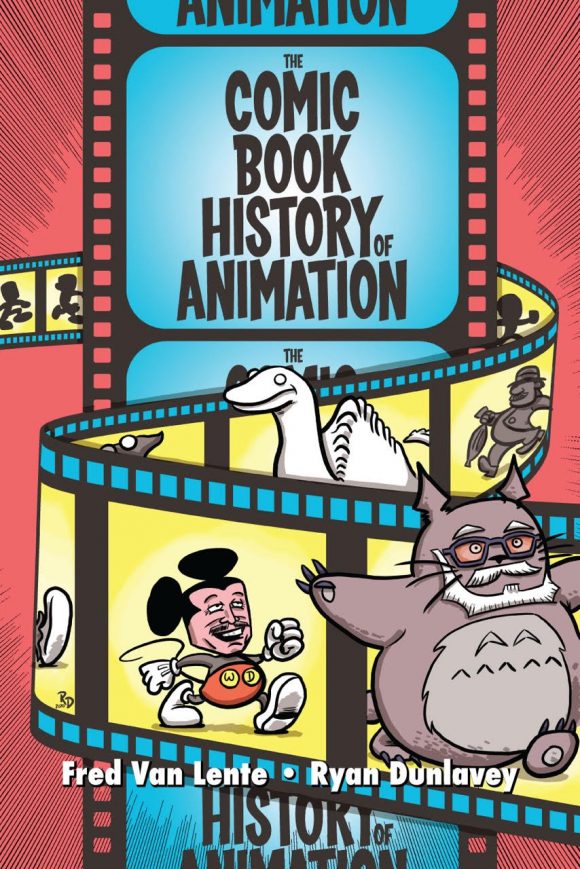 So let’s set the scene: Ronald Reagan was in the middle of his first term as president. Terms of Endearment, which would go on to win five Oscars — Best Picture, Best Director (James L. Brooks), Best Actress (Shirley MacLaine), Best Adapted Screenplay and Best Supporting Actor (Jack Nicholson) — topped the box office while in limited release. It would go wide later in the month. But you know what was also in theaters? The gently brilliant A Christmas Story, which would not become a smash until it received a second life on home video and, later, marathon showings on cable. In the Nielsens, the second part of the TV movie Kenny Rogers as The Gambler: The Adventure Continues was the top show of the week. All Night Long (All Night) by hit machine Lionel Richie led the Billboard 100, while Richie’s Can’t Slow Down was the best-selling album.

The Amazing Spider-Man #250, Marvel. All of the comics on this list came out TWO MONTHS before I became a comics fan and regular reader — I turned 12 in 1983 and I’d read comics before but this was the first year of my regular monthly reading habit. At first, I read a lot of Marvel titles, a handful of DC and absolutely nothing else because there were no comic stores where I lived, so I didn’t even know other comics existed (and I’ve never been an Archie fan). 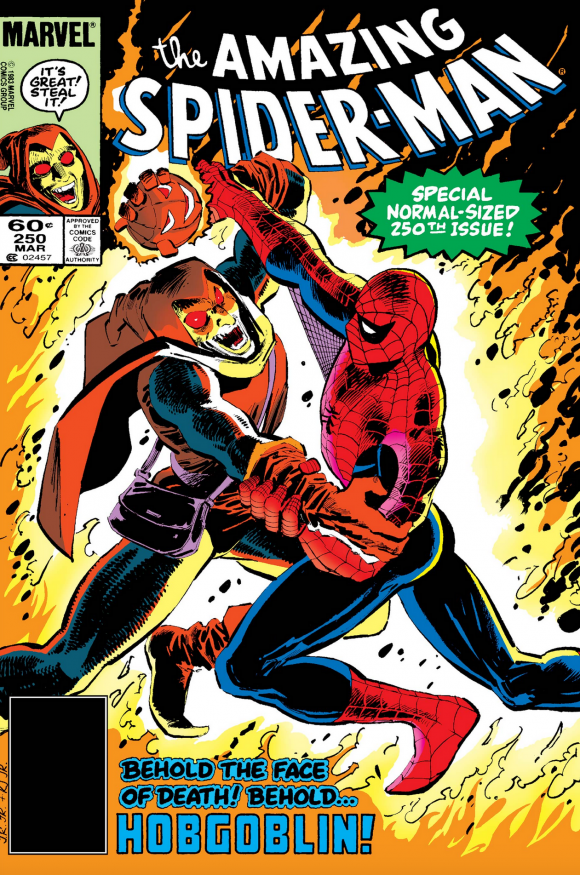 Luckily for me the newsstand where I bought comics held onto the ones they didn’t sell so right after I started my comics buying habit I was able to scrounge up a couple months’ worth of back issues of my favorite titles — including several on this list like this KILLER issue of Amazing Spider-Man. (The first issue of Spider-Man I ever read was Amazing #252, and only because I thought his new black costume looked cool.) This is John Romita Jr’s last issue before he became the artist for Uncanny X-Men and he goes out swinging with a fight and cliffhanger that led right into my all-time favorite Spidey issue, #251, which was Ron Frenz’s debut on the title and an absolute banger of a story. Klaus Janson inked both issues and made the art transition seamless.

Scott adds: The character seems boring and old hat today, but back in ’83 the mystery of who was under the Hobgoblin’s mask was one of the hottest things in comics. It was disappointing to realize years later that they never really had a plan for it. (For more on that, click here.)

DC Graphic Novel #2: Warlords, DC. At age 12 the only thing I liked as much as comic books was video games and I would have been all over this if my newsstand had carried it, and if I could have afforded the hefty $5.95 price tag! I did end up getting this years later. It has has some very pretty David Wenzel art but it’s a tough read, full of faux arcane language and mythology that was common in fantasy fiction of the era (and which always makes me tune out). This doesn’t even really begin to adapt the story of the video game. The previous “issue” in this graphic novel series — Star Raiders — was a lot more successful and was set in the same universe as one of my all-time favorite comic book series – Atari Force, which would debut a few months later. 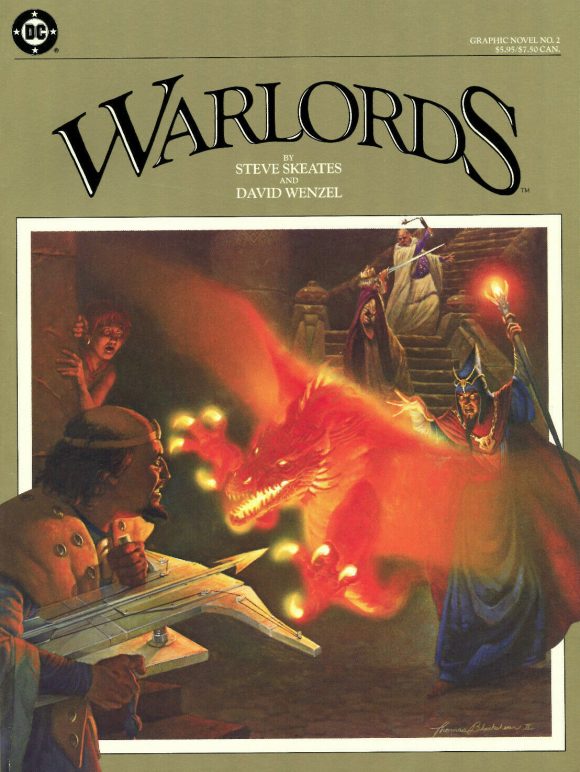 Doctor Strange Classics #1, Marvel. Before trade paperbacks were all the rage Marvel (and DC) put out these high quality double-sized, no ads reprints of some of their most acclaimed stories by A-List creators — often with the subtitles “Classics” or “Special Edition.” I have a lot of them, including this one showcasing Steve Ditko in his prime. These reprints turn up in back-issue dollar bins all the time and they’re arguably a superior format to the standard trade paperbacks — personally I prefer them to, say, Marvel Masterworks (gasp!). If you ever stumble across them, grab ’em! 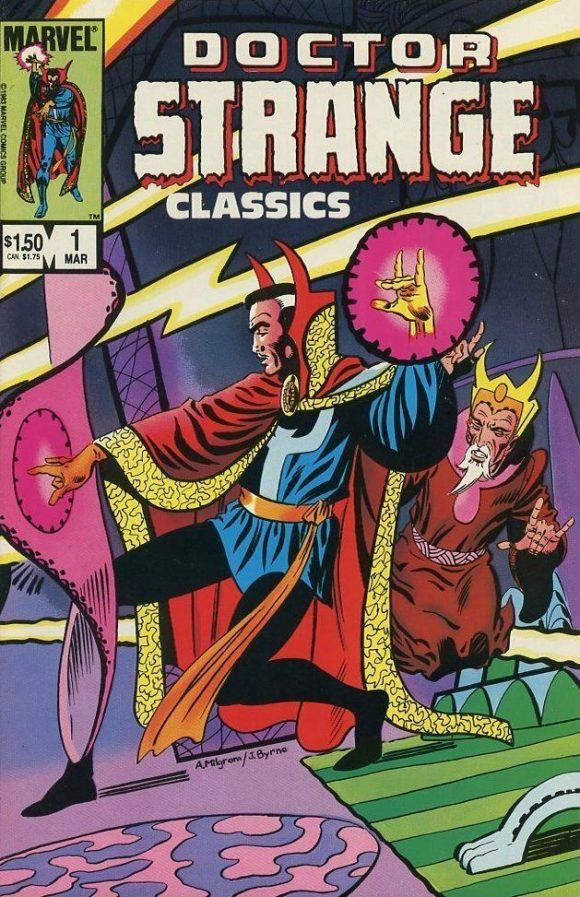 Magik #4, Marvel. Another “back issue” find for me when I was new to comics — Uncanny X-Men was my gateway drug and I was a mark for every spin-off and guest appearance of those characters. It took me several months to realize this was an X-Men comic at all (even with the prominent “Storm and Illyana” subtitle right there on the cover). It’s the end of the series, but its a total page-turner, the highlight being the origin of Magik’s trademark Soulsword. It would be years before I tracked down Issues 1-3 but this one stands on its own: The characters were all very new to me but I had no trouble problem reading and enjoying this story with the absolutely criminally underrated Sal Buscema pencilling some of his best work ever. 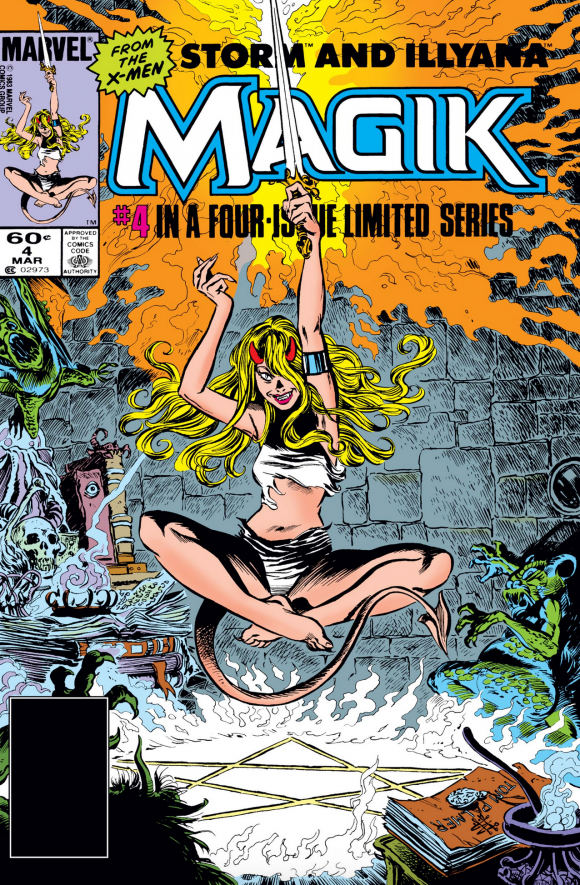 Saga of Crystar, Crystal Warrior #6, Marvel. I’ve never read an issue of Crystar and know almost nothing about it but… painted cover! Nightcrawler!! SOLD. 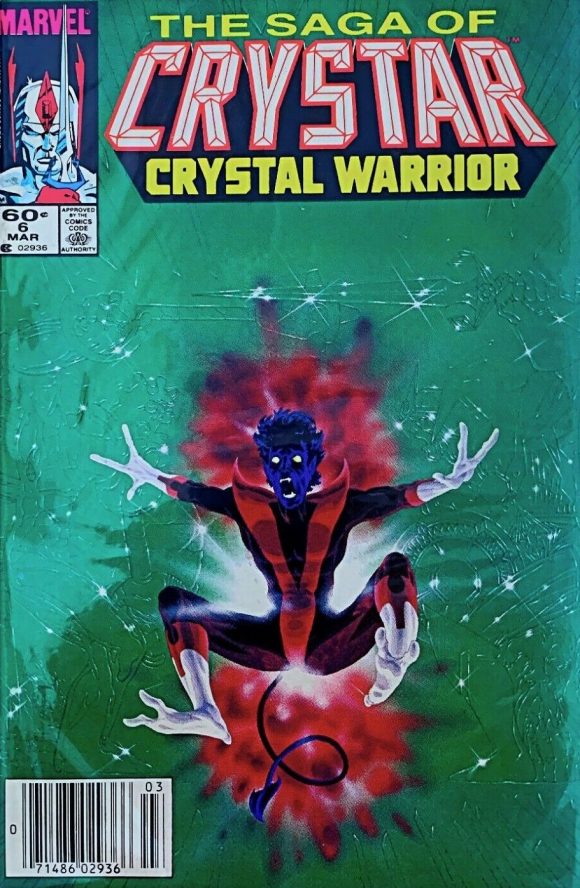 Thor #341, Marvel. This would have been on the top of the stack for me too — Thor! Walt Simonson! Giant Dragon fight! How can you go wrong?! 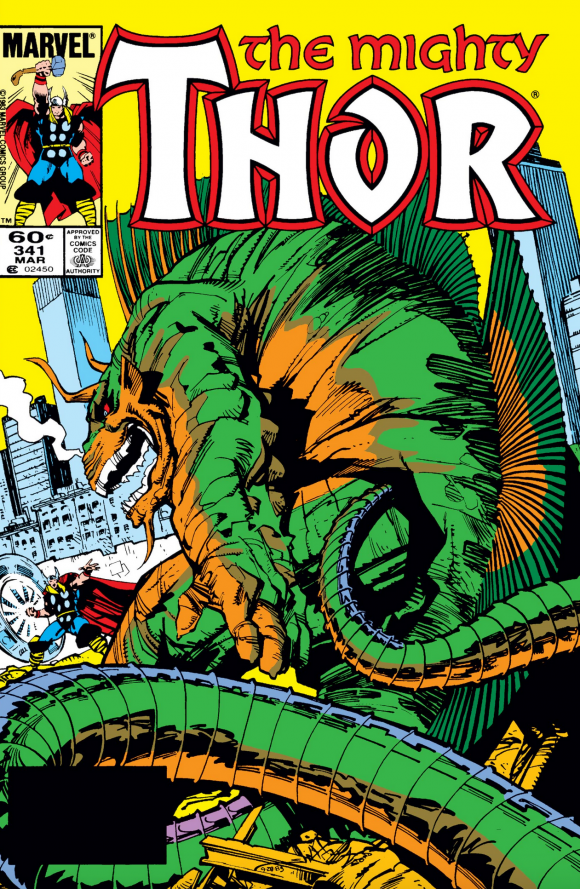 X-Men Classics #3, Marvel. Damn, this was a good week to be an X-Men fan! Another premium reprint series — this one is a special treat that reprinted the X-Men issues that helped make Neal Adams a star. Collected editions of Adams’ X-Men work are pretty popular but these are still pretty widely available (and affordable) in the back- issue bins! 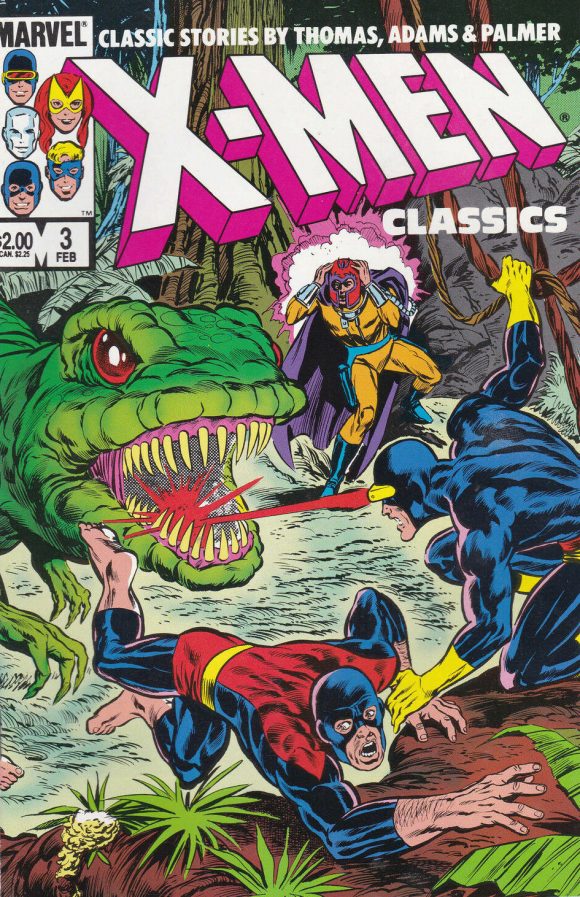 Official Handbook of the Marvel Universe #14, Marvel. This is a cheat as it actually came out one week before the one I’m supposed to be writing about but I had to include it because this single comic is GROUND ZERO of my lifelong superhero fandom. As a teenager I read the SHIT out of the entire encyclopedic OHOTMU series, every word, cover-to-cover — both the original run and the Deluxe version – and when they were new they were often the comics I read through first. Issue #14 was the first issue of either series that I bought. I stumbled across it at a hotel newsstand while I was on a vacation with my family and spent the rest of the week engrossed in it, reading every last word, and was totally uninterested in spending time outdoors — much to my parents’ annoyance. It went so deep on arcane superhero knowledge that I couldn’t stop myself — I just ate it all up. 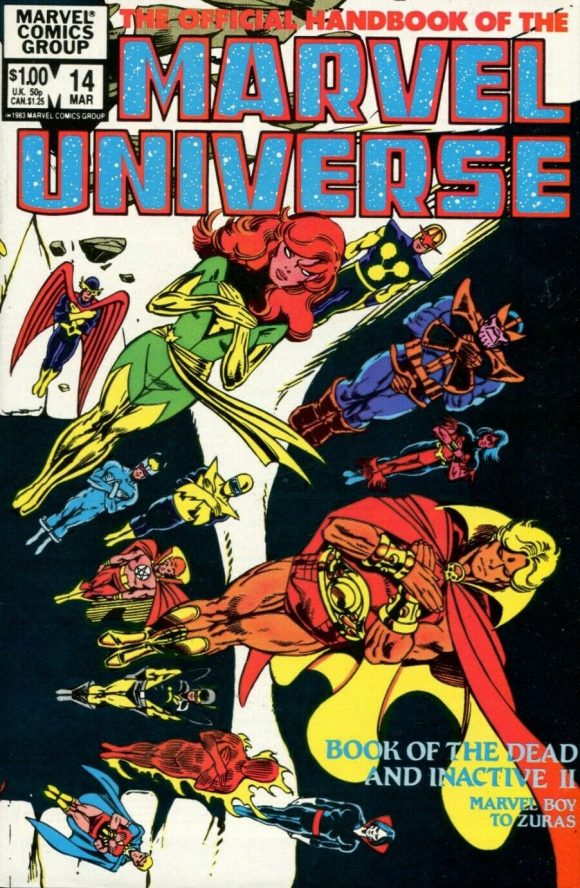 X-Men and the Micronauts #3, Marvel. This was a weird, trippy series, if I recall, that kinda creeped me out a little, exacerbated by the fact that Jackson Guice drew a really scary Baron Karza. I’d love to find this and read it today – I’ll bet it holds up. 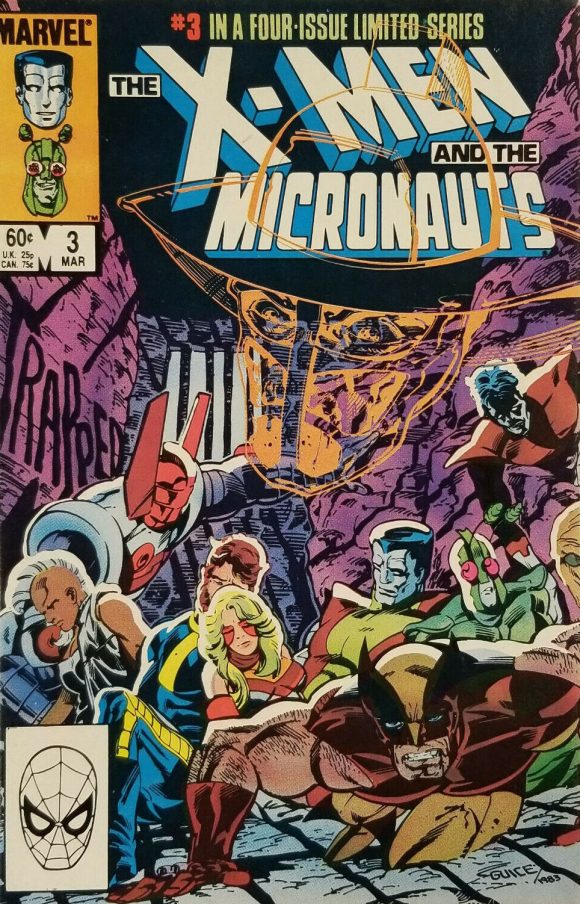 Ryan adds: Despite my rampant X-Men fandom I didn’t even know this series EXISTED until I worked at Wizard magazine more than a decade later, but I totally would have picked it up if I’d seen it! I confess I still haven’t read it and I can’t even imagine how the X-Men and Micronauts would cross over, but if anyone could pull it off it would be the all-star writing tag team of Bill Mantlo and Chris Claremont.

Further Adventures of Indiana Jones #15, Marvel. This was another comic I very infrequently saw on the spinner rack as a kid, but on the rare occasion I got one, it was always good. 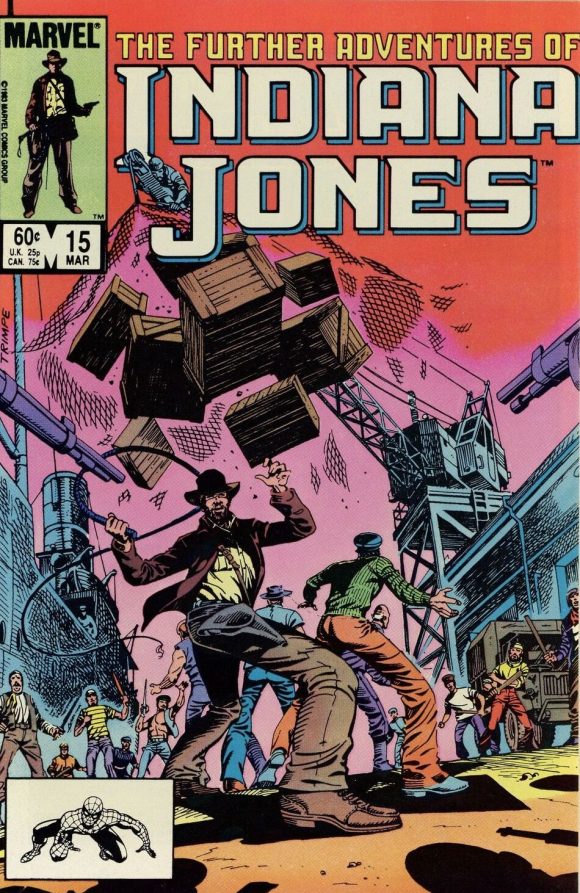 Amazing Heroes #36, Fantagraphics. That blurb, man: “This Issue: ROY THOMAS tells all (and we do mean all!) about Infinity, Inc.! Also: A Who’s Who of the All-Star Squadron and a Guide to DC’s many Earths!” Groovy Machlan/Ordway cover too. I think I need to track down a copy. Captain America #291, Marvel. Really, why do you need a Tumbler when you already have a Leaper?