Scott and Dan — with special guest Anthony Durso — hit up the comics racks from 39 years ago!

This week on RETRO HOT PICKS, our guest is Anthony Durso, a 13th Dimension regular and the owner of Retropolis Tees and The Toyroom custom toy-package and playset company.

(Keep in mind that comics came out on multiple days back then — as has become the case now. So these are technically the comics that went on sale between Aug. 16 and Aug. 22.) 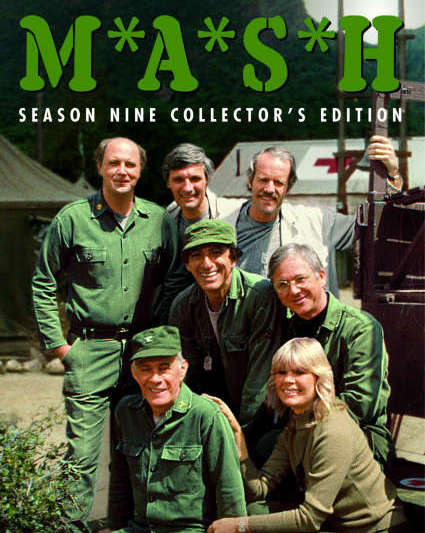 So let’s set the scene: Ronald Reagan was early in his first presidential term. Cult-fave horror-comedy An American Werewolf in London premiered. The Jeffersons was a top hit, but MASH was even bigger. The top single on the Billboard 100 was the interminable Endless Love, by Diana Ross and Lionel Richie. Believe it or not, though, Joey Scarbury’s theme from The Greatest American Hero was in the second slot.

Anthony Durso, owner of The Toyroom and Retropolis Tees

1981, huh? Well, I’m in 9th grade and I’m about a year past being able to buy comic books again. You see I was banned from buying “funny books” for about a year, just missing Action
Comics #500. My mother wasn’t pleased with a few grades and thought comic books were the problem. It took a year of waiting patiently until I was able to convince her (with some persuasion from an aunt and uncle) to let me buy them again. With the caveat at the time that I would only buy “special issues.” Originally special issues was supposed to be first issues, anniversary issues and annuals. But quickly I added miniseries and origin issues and then it really didn’t matter anymore.

So in 1981, I was trying to rebuild the collection quickly after having a year sabbatical, while still holding on to the “special issue” mentality on occasion. How else to explain some of my questionable purchases? Which is apparent by what I bought this week in August of ’81.

All-Star Squadron #3: I fell in love with All-Star Squadron (no acronyms please), when I first saw the house ads promoting it (along with Arak, Son of Thunder). All-Star Squadron was the first series I completed in its entirety and it’s a badge of honor I still reminisce about. So the third issue featuring Solomon Grundy was an early step in that 67-issue (plus 3 annuals) run. There’s something about Earth-Two that I’ve always liked and in lieu of a proper JSA title at the time, this fit the bill nicely. 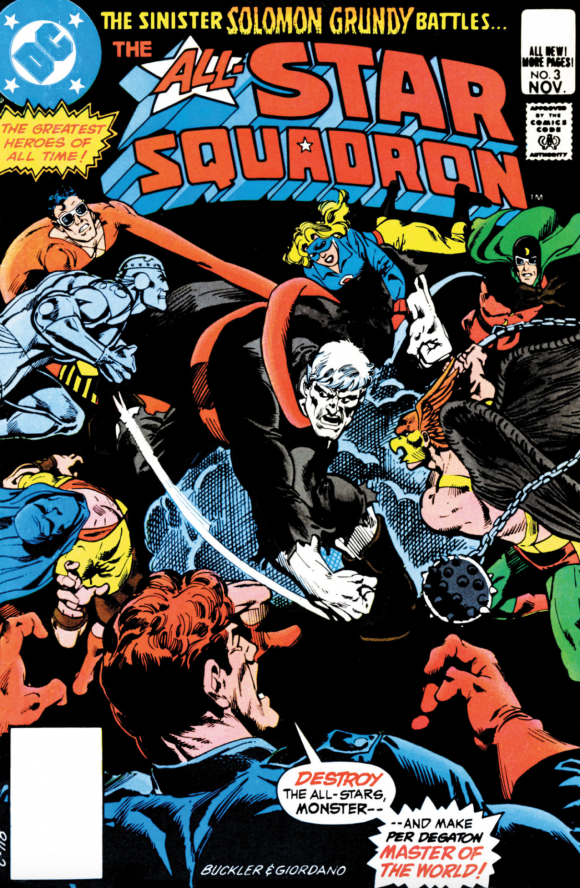 Scott adds: I can never say “no” to a Solomon Grundy cover.

Dragonslayer #2 and Raiders of the Lost Ark #3: Movie tie-ins AND mini-series. Double whammy for the “special issue” scorecard. Fun fact: I can’t recall if I ever read either issue of the Dragonslayer adaptation and I know I definitely didn’t see the movie. Raiders of the Lost Ark I DID see but it wasn’t until several years later when it had it’s first run on HBO (which I recorded on one of my earliest VHS tapes, along with some episodes of General Hospital and the Hulk Hogan television pilot Goldie and the Bears). 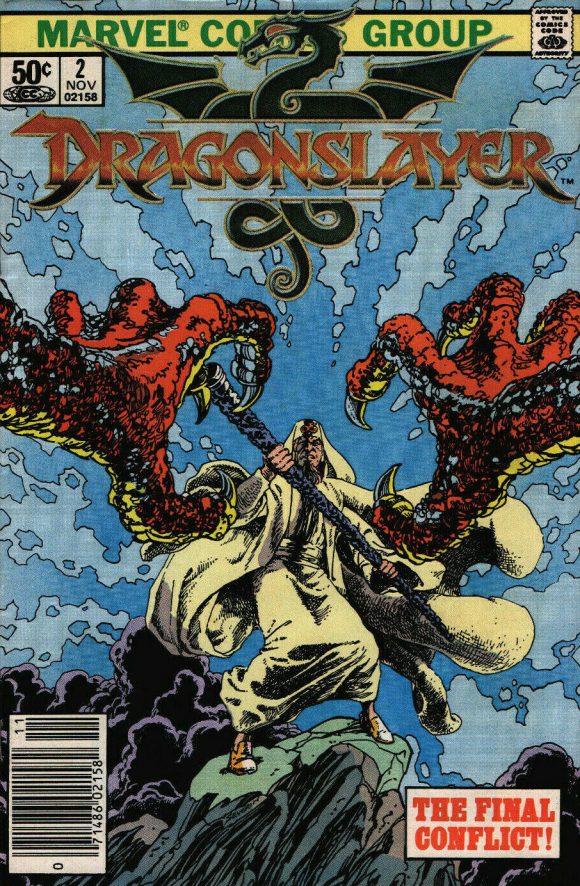 Scott adds: No one even remembers the movie Dragonslayer today, but man oh man did I love it when I was a kid. If I had seen this on a spinner rack, there would have been no walking home without it. 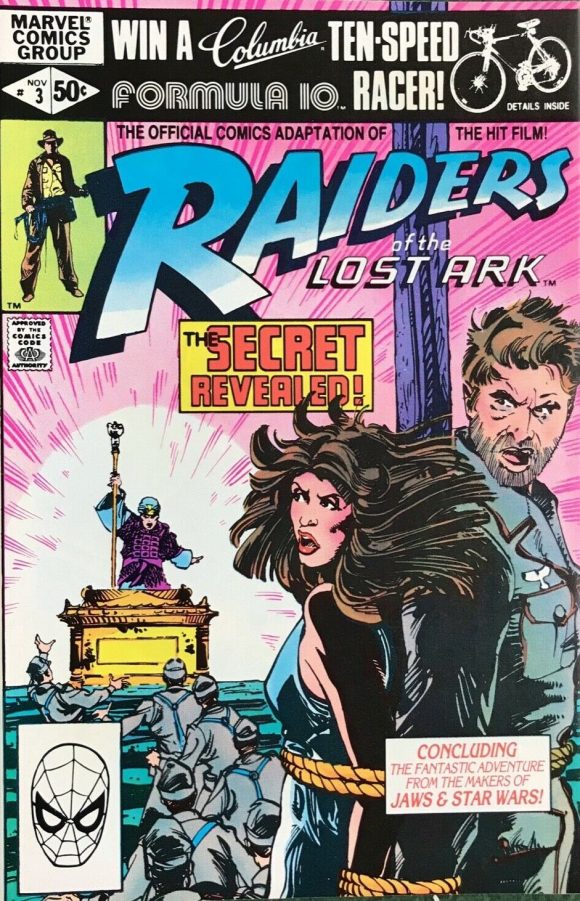 Dan adds: I read the Raiders adaptation with somewhat mild interest. I liked the movie but it never got under my skin like Star Wars did. I really wanted to love it but have long settled for admiration and respect.

The Warlord #51: The first issue of Warlord I bought was #48, with the 16-page Arak preview. Then I read my brother’s copy of #50. I think I just bought #51 because the cover caught my eye and it was a reprint of #1. I didn’t care for the Dragonsword backup (it never got a Who’s Who entry, did it?) but I do remember liking Claw the Unconquered a few issues before. Warlord was a great comic but it wasn’t one that popped up on newsstands much. 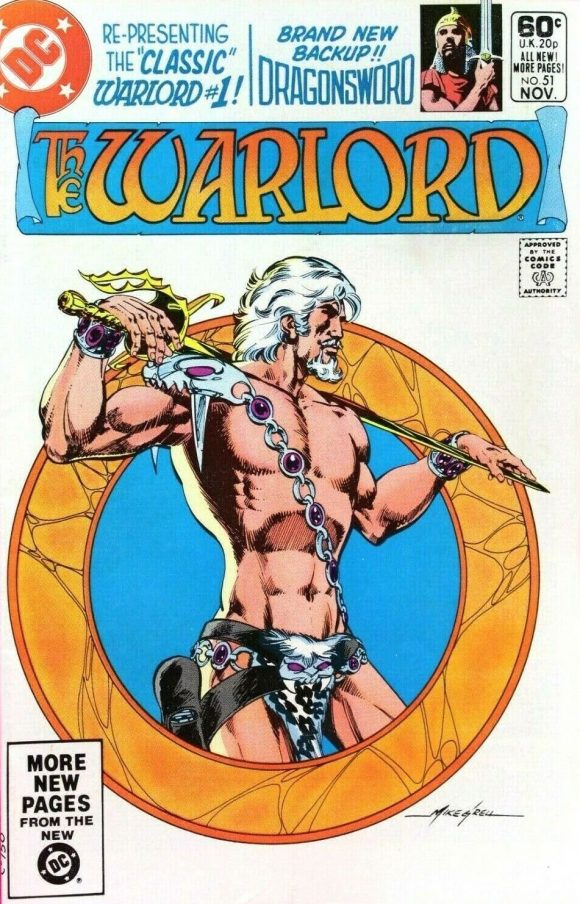 Peter Parker, the Spectacular Spider-Man #60: Kind of a “Special Issue”. Why was it double-sized again? I know that’s why I bought it because it wasn’t the Frank Miller cover. At this time I still wasn’t getting what Frank Miller was all about. It wasn’t until Daredevil #181 that Miller clicked for me. 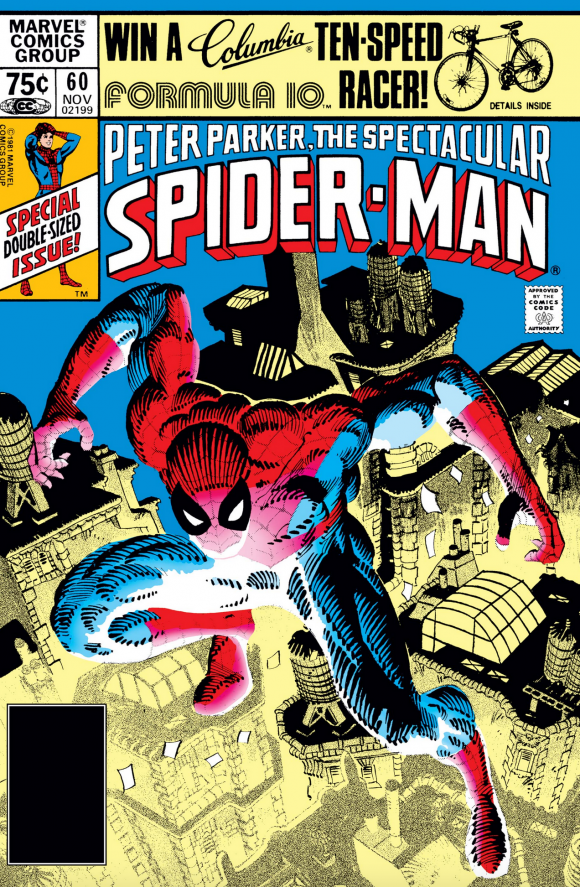 Fantastic Four #236, Marvel. “Terror in a Tiny Town!” It felt like this was when the comics world kind of sat up and took notice that John Byrne was doing amazing things here in the pages of Fantastic Four. 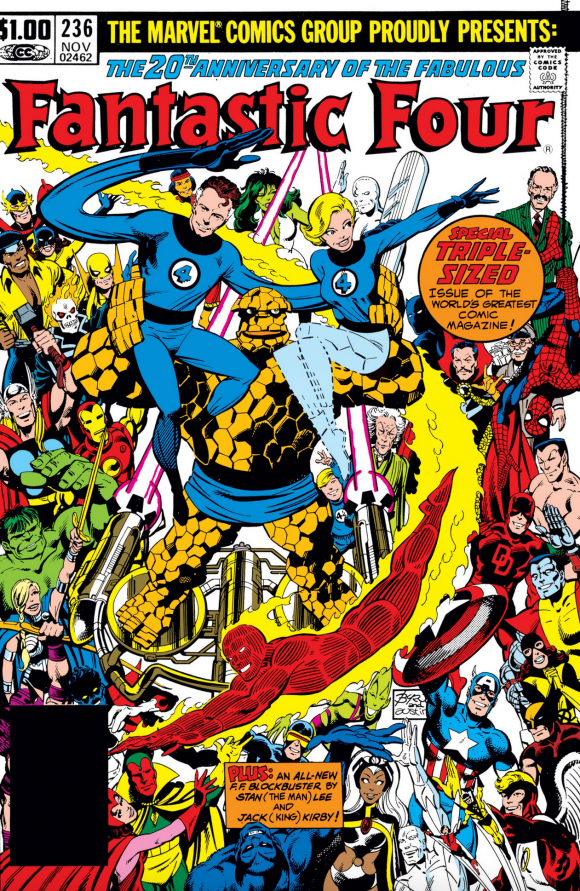 Anthony adds: The 20th anniversary of the Fantastic Four. That’s a “Special Issue” if I ever saw one. 20th Anniversary… which is now 39 years old. (GULP!) This is the issue that turned me on to the John Byrne FF run. I was always a Byrne mark. In fact, this is the first time I ever started buying the FF on a monthly basis, finishing up this particular run with #300. The backup in this is a Stan Lee/Jack Kirby joint utilizing a script from the FF cartoon. This was still during my “I HATE JACK KIRBY” phase so I wasn’t liking it at all. Plus, H.E.R.B.I.E? Ugh. My opinion has changed on both since then.

The Brave and the Bold #180, DC. The Spectre, a crazy-looking sorcerer dude, a Jim Aparo Batman, a giant blood-red squid — this cover has everything! 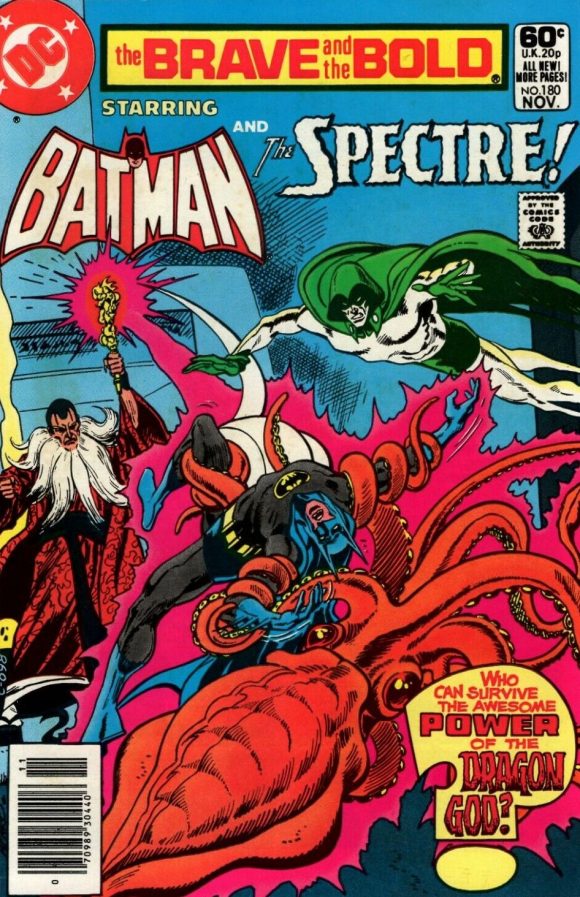 Famous Monsters of Filmland #178, Warren. If it had Superman II on it, I wanted it. I never did see this one on the stands, but if I had, I would have snapped up then and there. 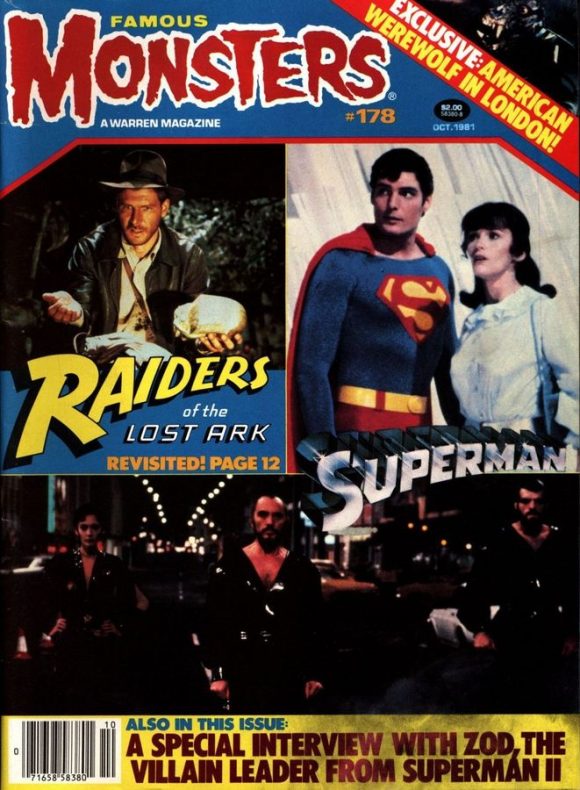 Detective Comics #508, DC. Not my favorite period of Detective but there was some funky stuff going on, like this King Tut knockoff. One of these days, I’m going to give Gerry Conway’s Batman another long look. 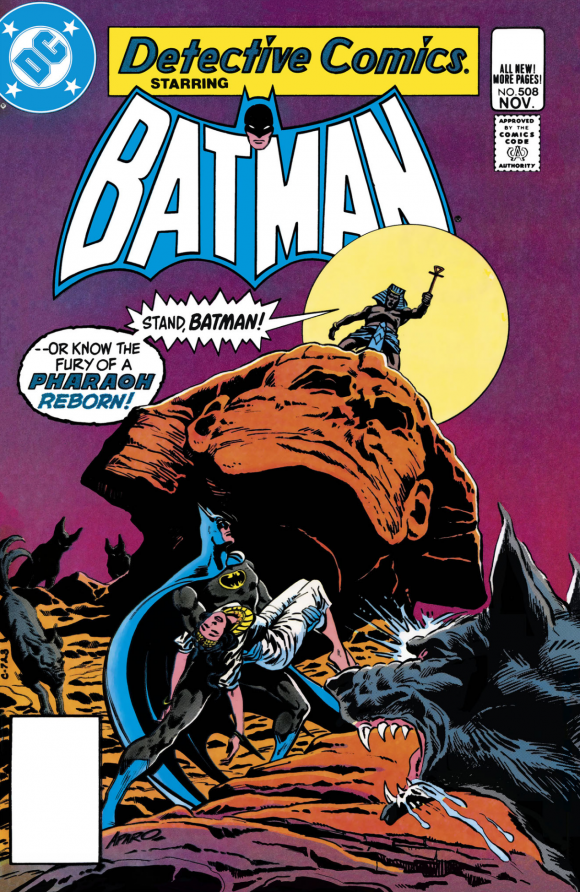 And now for something unusual: Anthony takes a look at some titles that he didn’t take home…

Now what DIDN’T I buy that intrigues me?

Richie Rich Zillionz #29: Do you know I’ve never purchased a Richie Rich comic in my, um, almost 50 years of reading/collecting? Loved Casper though. 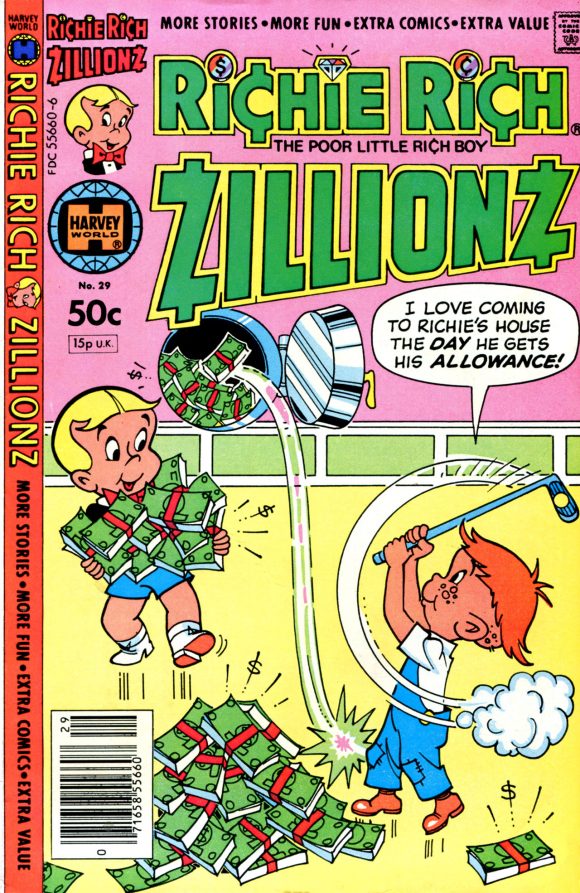 Sabrina the Teen-Age Witch #70: When I first started reading comics it was really about my ABCs. Archie, Batman and Casper. All three were influenced by the cartoons and TV shows where I first encountered these characters. Sabrina was there too (with the Groovie Goolies) but I don’t think I ever bought a Sabrina comic. I might have but I didn’t keep comics back then, as they’d wind up on my closet floor and my mother would eventually throw them out. If you ever ask me to choose between Betty and Veronica, my answer would be Sabrina.< 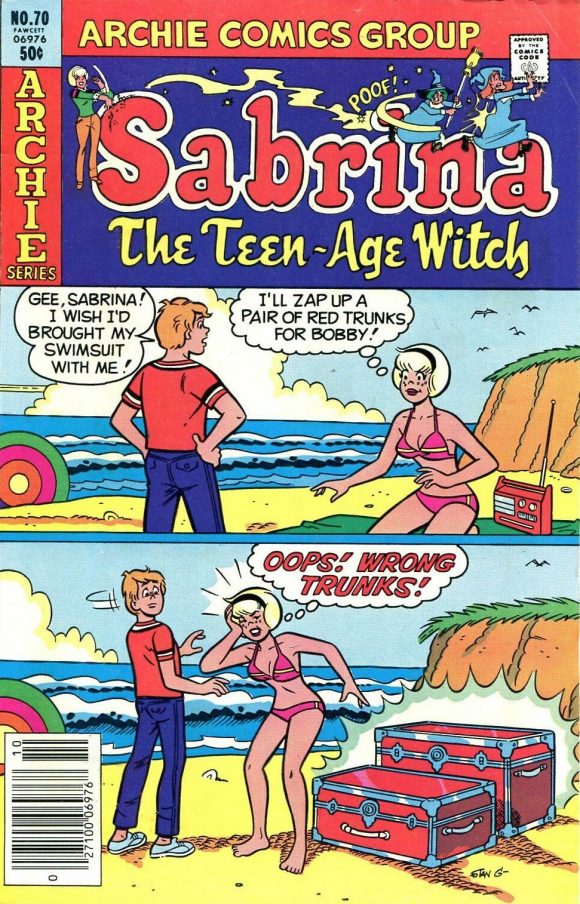 Adventure Comics #487: I remember liking the Dial “H” for Hero concept but Adventure Comics didn’t show up often on the newsstands during this era. During the Dollar Comics days though, oh yeah! But if I had seen it I would’ve bought it even though I wasn’t a fan of Carmine Infantino’s art from this period. The cover would’ve sucked me in. I think the first issue I bought featuring the Dial H’ers was #490. Which was also the LAST regular comic issue before it went digest. 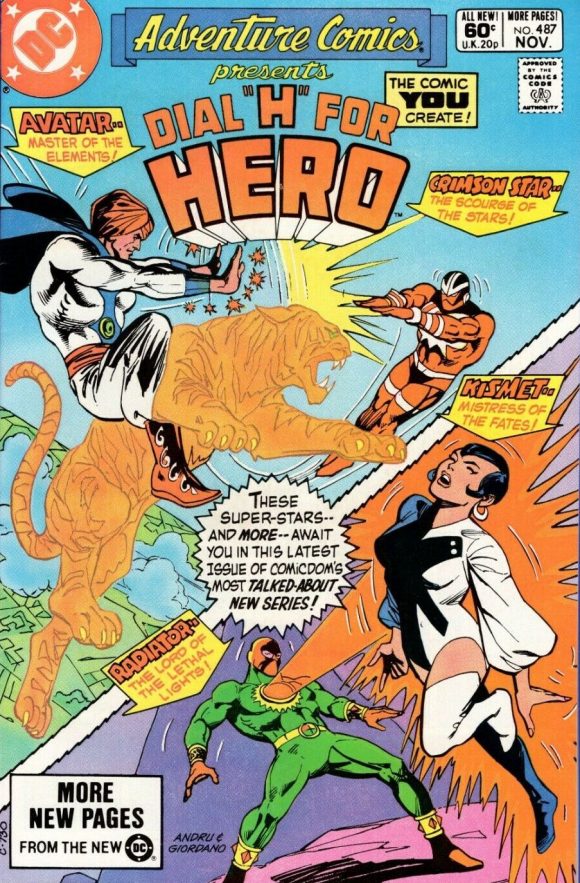 Dan adds: I was also intrigued by the Dial “H” kids. I also wasn’t a big fan of Carmine Infantino’s art from this period. Such is life.

Warren Presents #14: Warren Magazines were always on a different shelf, along with Heavy Metal and kind of close to the “adult” section. So I never ventured too close for fear of getting busted by the proprietor. I was aware of Eerie, Creepy, The Rook and… Vampirella. But who the hell is Rex Havoc and how badly a rip-off of Raiders of the Lost Ark was this issue? In all my years of comic books I’ve never heard or seen of this. But now I need to know! Dan adds: If I’d seen this on the mag rack, I would have burst out laughing, even at the age of 14.