Scott and Dan — along with guest John S. Drew — hit up the comics racks from 45 years ago!

This week for RETRO HOT PICKS, Scott Tipton and I are joined by John S. Drew — host of The Batcave Podcast, The OSI Files and co-host of The World’s Greatest Super Friends Podcast (with me) — in selecting comics that came out the week of May 12, 1976.

(Keep in mind that comics came out on multiple days back then — as has become the case now. So these are technically the comics that went on sale between May 9 and May 15.) 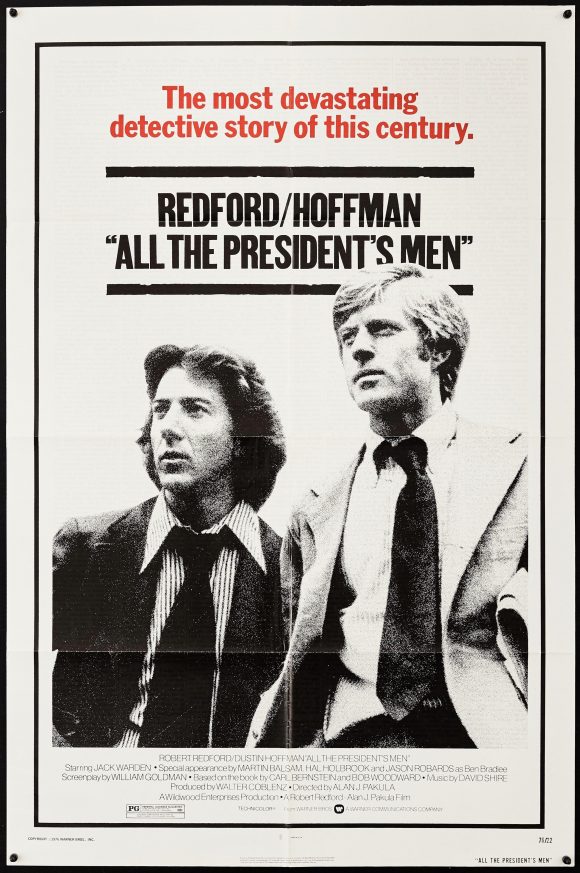 So let’s set the scene: Gerald Ford was president but Jimmy Carter was on his way to the Democratic nomination to unseat him. Fittingly, All the President’s Men was the No. 1 movie at the box office.

A network showing of 1961’s The Parent Trap was the top-performing show on TV, but here are two shows that were in the Top 10 for the season: The Bionic Woman and The Six Million Dollar Man. The best-selling single was the very of-the-moment Boogie Fever by The Sylvers. (The runner up was John Sebastian’s Welcome Back — aka the theme to Welcome Back, Kotter.) And the No. 1 album was the Stones’ Black and Blue — hardly their best, hardly their worst — with such minor stalwarts as Hand of Fate, Cherry Oh Baby, Memory Motel and Crazy Mama.

Batman #278, DC. We’re 10 years out from the premiere of the Batman ’66 TV series, and in looking at this issue, I see there are still ’66 influences on the comic despite its darker turn. Gordon has a Batphone right on his desk and Batman clearly works with the police and is a media figure in that Gordon has to field questions about their relationship. But there is also some of the humor there as Batman asks a gibbering man what he wants. “An autograph?” Batman quips. It’s done in sarcasm, but it still seems off from what one expects from Batman. 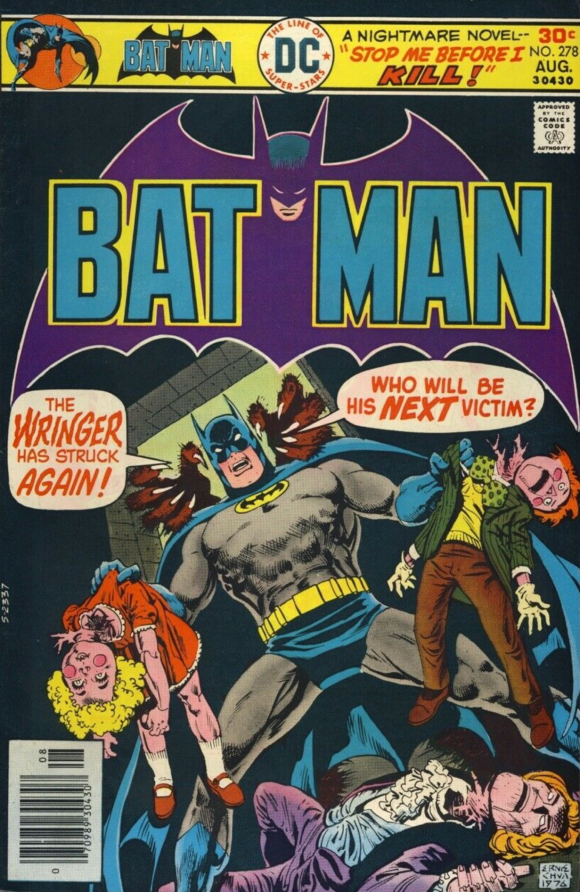 Dan: John’s right. The mid-’70s was kind of an odd time for Batman. Stories weren’t quite as dark or gothic as they typically were earlier and later in the decade, but they weren’t ’60s camp, either. Stories were somewhere in between and they either worked or didn’t. The villain in this one is the Wringer, who you don’t remember because why would you?

Captain America #200, Marvel. I never was a fan of Captain America in the comics. Like Superman, I found him to be square. The MCU and a recent read through issues in the early ’80s have softened that view.  So how great is it that the 200th issue of Captain America should fall in the bicentennial year of the United States? Edited, written and drawn by Jack Kirby, Cap and Falcon take on a group that wants to return the U.S. to British sovereignty. 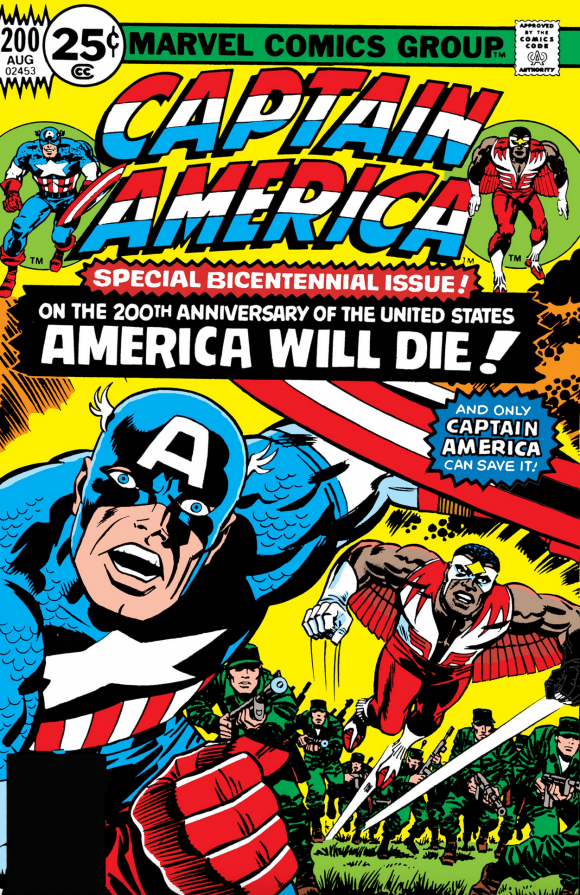 Scott adds: With a Jack Kirby cover like that, plus the fact that it was a 200th issue, there would have been no way I could have passed this issue up.

The Six Million Dollar Man #2, Charlton. It was the second issue of the bimonthly comic based on the wildly popular TV show and Charlton was already pushing the Kenner toy line with a story of a Puppet Master-type character who controls Steve Austin via a doll that looks suspiciously like the famous action figure.  If you had any doubt this was just one long commercial, Steve Austin himself pitches the toy in the final panel of the story. 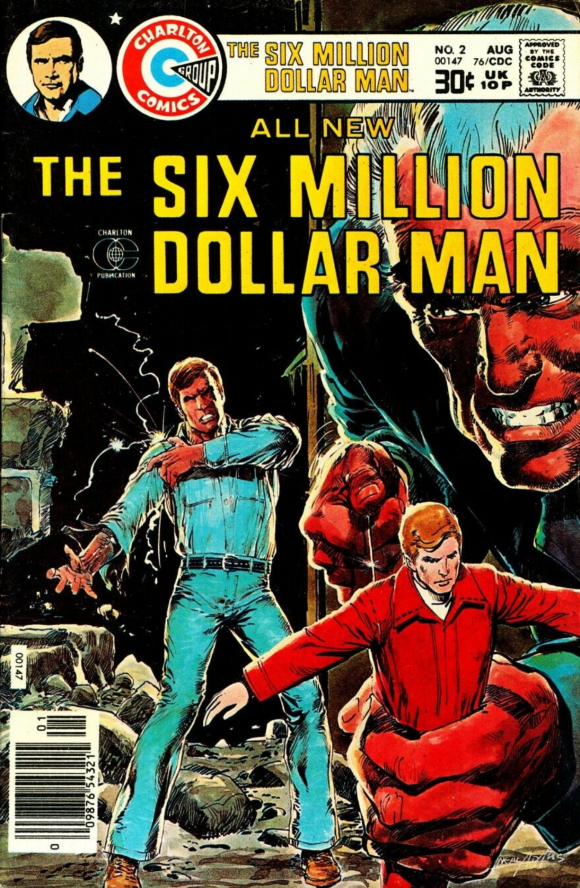 Scott adds: My local pharmacy never ordered from Charlton, I guess, because I was a Steve Austin nut as a kid and would have been all over this.

Dan adds: I didn’t watch much of The Six Million Dollar Man but I wanted that action figure! Oh, and dig that Neal Adams cover!

Thor #250, Marvel. Asgard is now ruled by Mangog who threatens to destroy the entire universe with the Odensword should anyone rise against him. Like Cap, I never had much of an interest in Thor growing up. (I was more a Hercules guy.)  Even his ’60s animated series was my least favorite of the Marvel Super Heroes cartoons. And yet, in recent years, I have begun to develop a respect for the character. 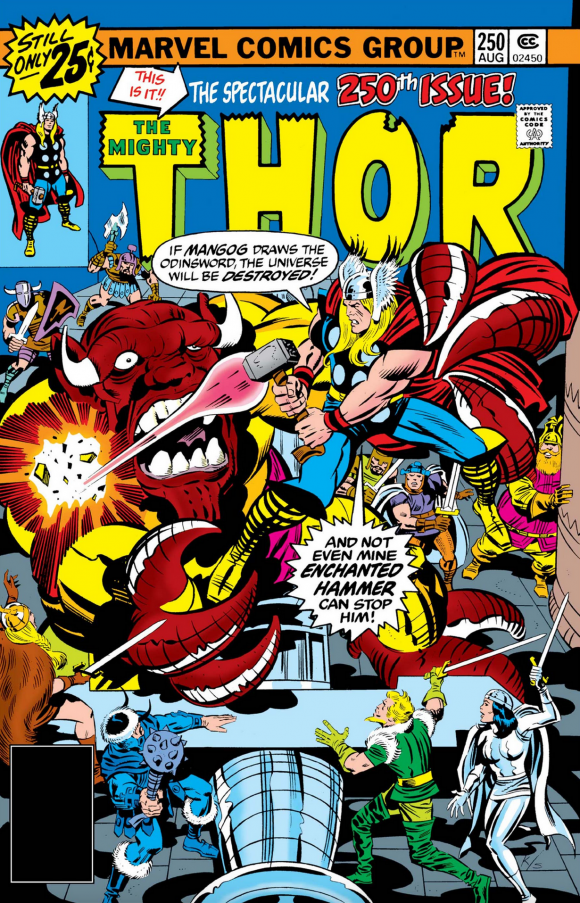 Amazing Spider-Man #159, Marvel. Ross Andru is to my mind the greatest and most underrated Spider-Man artist ever. Outstanding anatomy and expression, great storytelling, and the most amazing location backgrounds of New York City ever done in comics. This issue kicks off the famous Hammerhead/Doc Ock clash, the only time anyone ever made Hammerhead seem threatening. 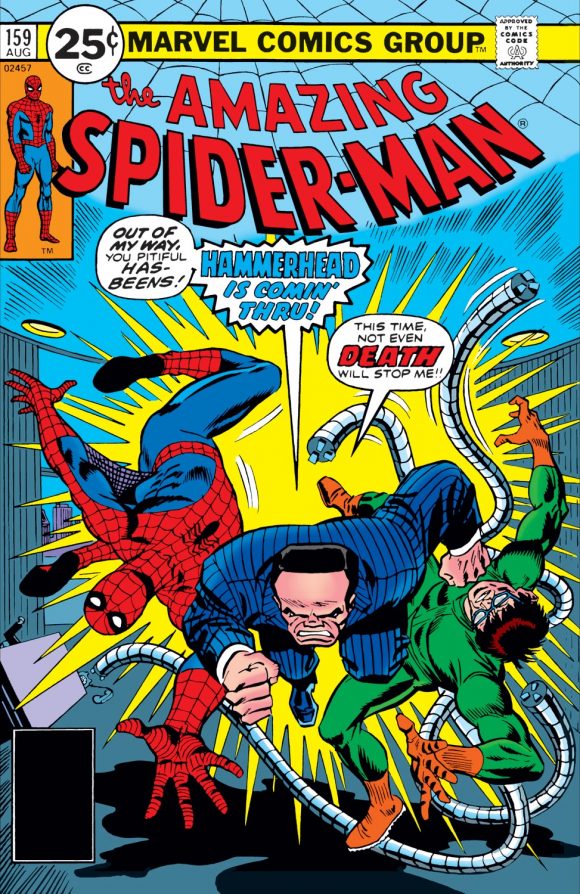 John adds: Spider-Man teams up with Doctor Octopus to rescue Aunt May from Hammerhead.  But even more importantly, we get an appearance by the Spider-Mobile!

Superman #302, DC Comics. Cover appearances by Lex Luthor in the classic purple and green tights are actually kind of rare. It’s still to this day one of my favorite looks for Luthor, second only to the gray prison coveralls, when he would break out of jail and not even bother to change his clothes. “I’m a busy man, I’ve got to kill Superman!” 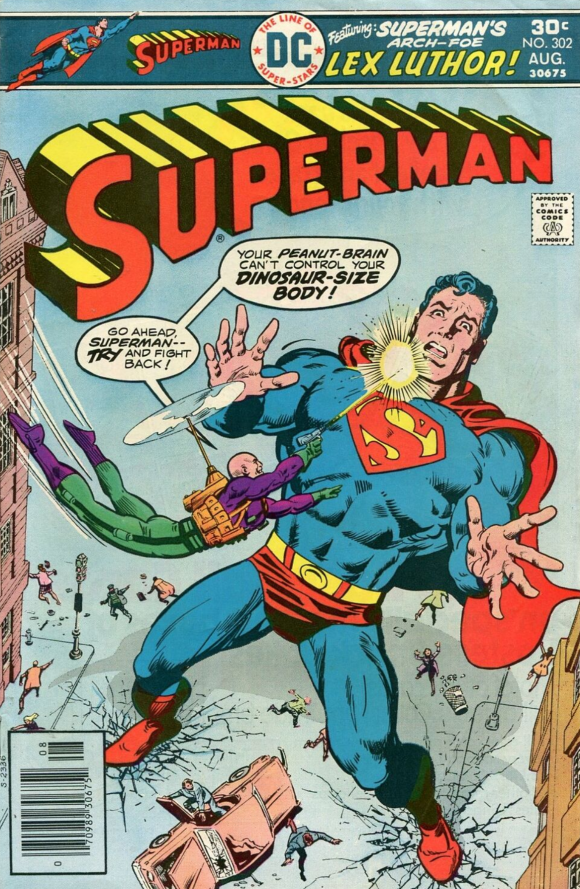 Master of Kung Fu #43, Marvel. Deep in the thick of Doug Moench and Paul Gulacy’s cinematic run on Shang-Chi. Rich Buckler’s cover is cool and all but check out Gulacy’s splash page too. 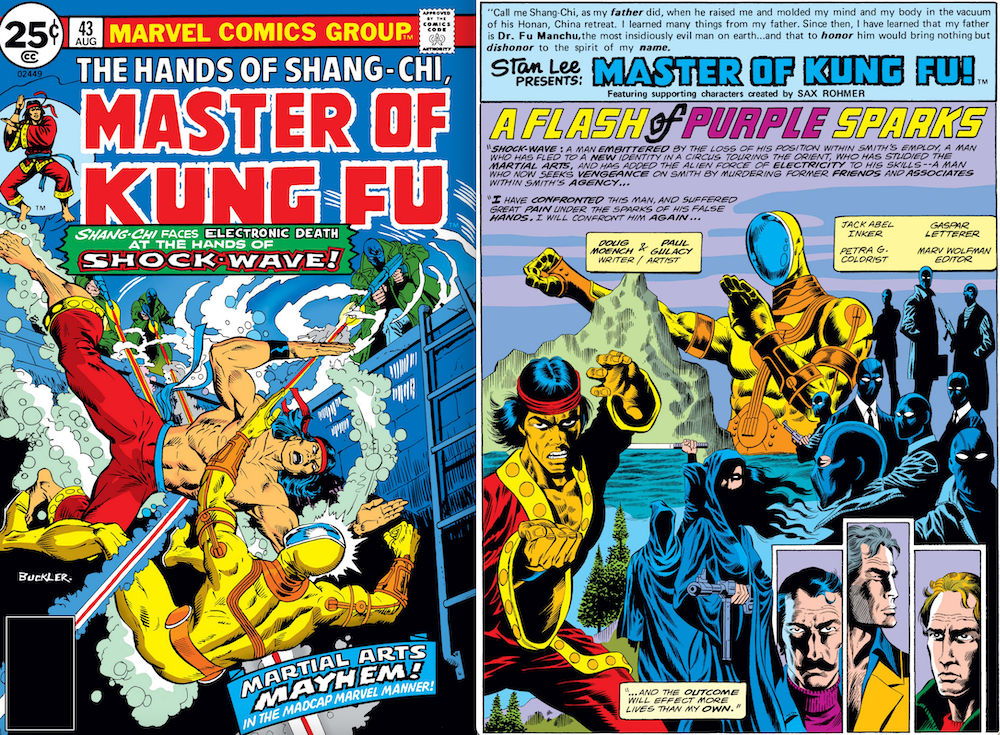 UFO Flying Saucers #11, Gold Key. Why is she running through a cornfield in heels? Did her car break down and happened upon the aliens? Was she just getting home from work when the aliens started chasing her into the neighbors’ cornfield? Whatever. Cover artist George Wilson rocks. 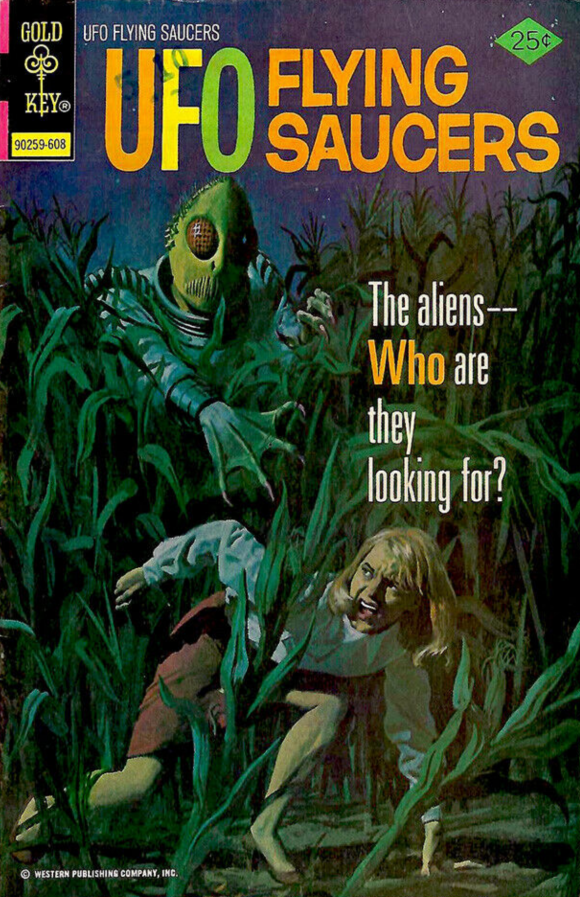