Scott and Dan — along with Paul Kupperberg — hit up the comics racks from 54 years ago!

This week for RETRO HOT PICKS, Scott Tipton and I are joined by writer and 13th Dimension columnist Paul Kupperberg in selecting comics that came out the week of Feb. 10, 1967.

Now, I have to admit there’s a completely self-indulgent reason we’re doing this particular week — it’s the one in which I was born and I couldn’t resist the idea of seeing what came out the same week I did. (My actual birthday is Feb. 12. Send presents!)

Unfortunately  it wasn’t the greatest week for comics, so Scott, Paul and I are also picking some wild cards from the month. Dig?

(Keep in mind that comics came out on multiple days back then — as has become the case now. So these are technically the comics that went on sale between Feb. 7 and Feb. 13.)

So let’s set the scene: Lyndon Johnson was in the White House but the most interesting news of the week was when Keith Richards and Mick Jagger were first arrested on drug charges Feb. 12 at the guitarist’s English home. It was a particularly soft week at the box office, so I’m just going to jump to TV where The Red Skelton Hour on CBS was the top-rated show. (No. 2 was the network’s showing of The Wizard of Oz.) The Monkees’ I’m a Believer was an enormous hit, with the Stones’ Ruby Tuesday in the Top 5. The Monkees also had a lock on the top two slots on the album charts, with More of the Monkees, followed by The Monkees.

Superman #195, DC. Oh, Mort Weisinger, you scamp. You got me again with another killer — literally! — cover for “The Fury of the Kryptonian-Killer!” by Jim Shooter, Curt Swan and George Klein. Even after editing the character for some 20 years, Weisinger was still finding new angles to the Superman mythos. For this story, that was the introduction of Rinol-Jag, the sole survivor of a planet that was destroyed by a massive chunk of the exploded Krypton, who had been trained by another alien being to hate all things Kryptonian, including, of course, Superman, Supergirl, the bottle city of Kandor… and even poor Krypto (who’s a good super-pup?)! I love that in a possible middle-finger response to the Fantastic Four’s monthly cover claim to being the “World’s Greatest Comic Magazine,” Superman now bragged of being the “World’s Best-Selling Comics Magazine!” 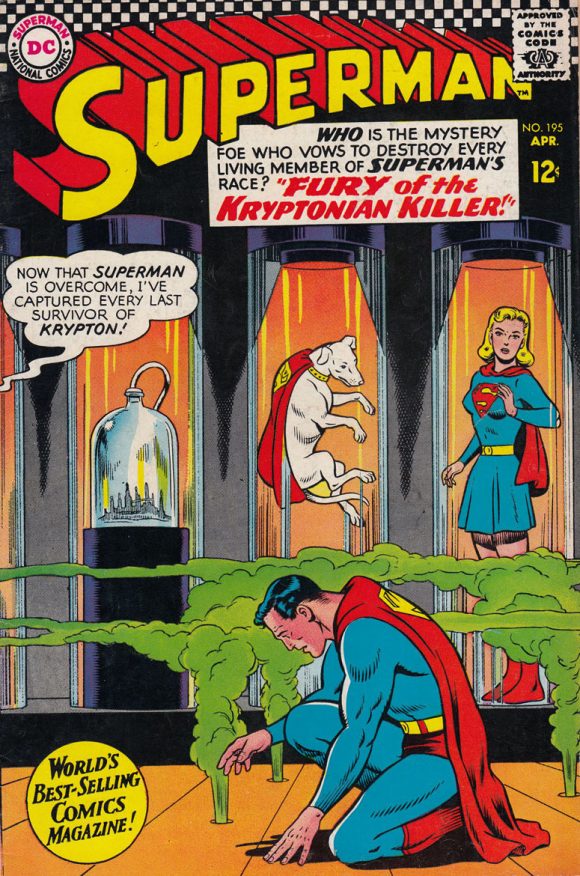 Scott adds: “Not Krypto!” Krypto the Superdog being captured on the cover would get me to buy the comic every time.

Wonder Woman #169, DC. Wonder Woman remained a guilty pleasure for me in my early years of comic reading and collecting. Her issues published in the years around 1960 by writer/editor Robert Kanigher and artists Ross Andru and Mike Esposito were the first “superhero” comics I read — coverless copies were available for two for a nickel at Dave Solomon’s secondhand bookstore on St. Johns Place in Brooklyn — although populated as they were with Mer-Boys and Bird-Boys and genies and dragons, these stories were more fairy tale than super heroic. (I wrote about these issues at length in the foreword for 2013’s Wonder Woman: The Amazon Princess Vol. 1 Archive Edition.) Bob had managed to toughen up the adventure quota somewhat by 1967, but stories like “Wonder Woman Battles the Human Centipede” (courtesy of the god of war, Mars) were no longer cutting it with readers; less than a year later, Denny O’Neil and Mike Sekowsky would be taking over and changing everything. 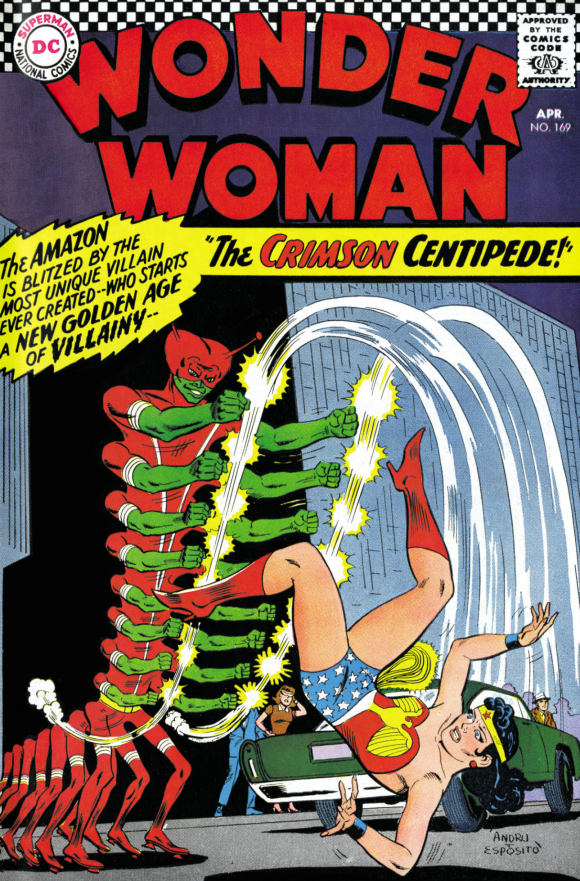 Scott adds: I can’t imagine why the Crimson Centipede never returned, but one reason might have been the artists saying “NEVER AGAIN!”  That’s a lot of arms and legs to draw.

Hawkman #19, DC. Gardner Fox and Murphy Anderson? You had me at “Wheet! Wheet! Wheet!” I was still finding my way around the DC Universe in 1967, what little there was of it in those days, but one of the first things I learned was that the titles richest in history and characterization were edited by one Julius Schwartz. Back then, the editor’s credit was buried in the indicia on Page 1 in tiny little type, but Schwartz’s titles stood out on the newsstand, thanks in large part to the art. His titles were handled by the company’s top talent, like Carmine Infantino, Gil Kane, Mike Sekowsky, and, of course, Murphy Anderson. 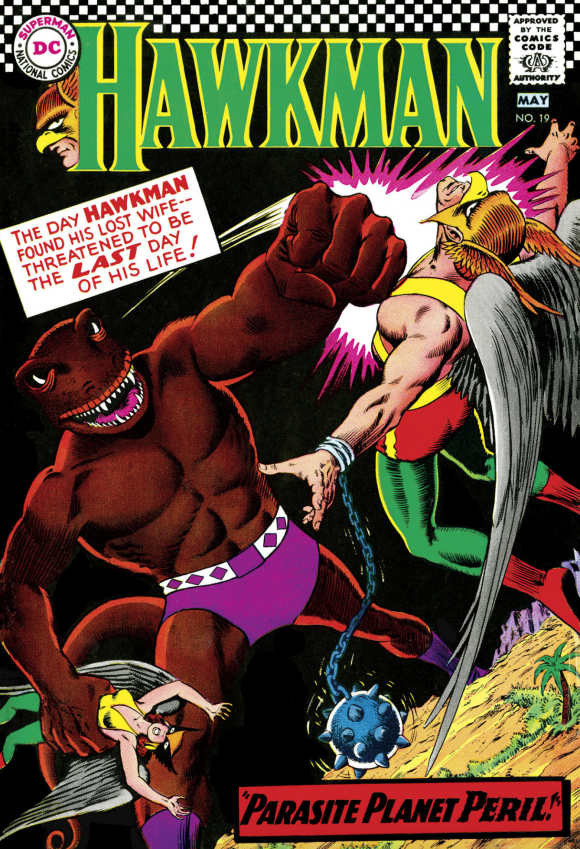 Dan adds: Hawkman is one of the great DC Silver Age titles, filled with funky villains, terrific Murphy Anderson art and that homeyness specific to the publisher’s titles. In this one, we get an extremely convoluted tale featuring the Manhawks, the Lizarkons and a guest appearance by Adam Strange.

Edgar Rice Burroughs’ Tarzan of the Apes #166, Gold Key. Edgar Rice Burroughs’ Tarzan of the Apes was one of the first “grown-up books” I read, and I grew up on the Johnny Weissmuller movies on Saturday morning TV, so when I found the lord of the jungle on the newsstand alongside my beloved superheroes, I gave the comic a shot. I probably couldn’t have picked a better time to dip into the title; this issue began an ongoing adaptation of the ERB novel Tarzan the Terrible, written by Gaylord DuBois, with art by the amazing Russ Manning. 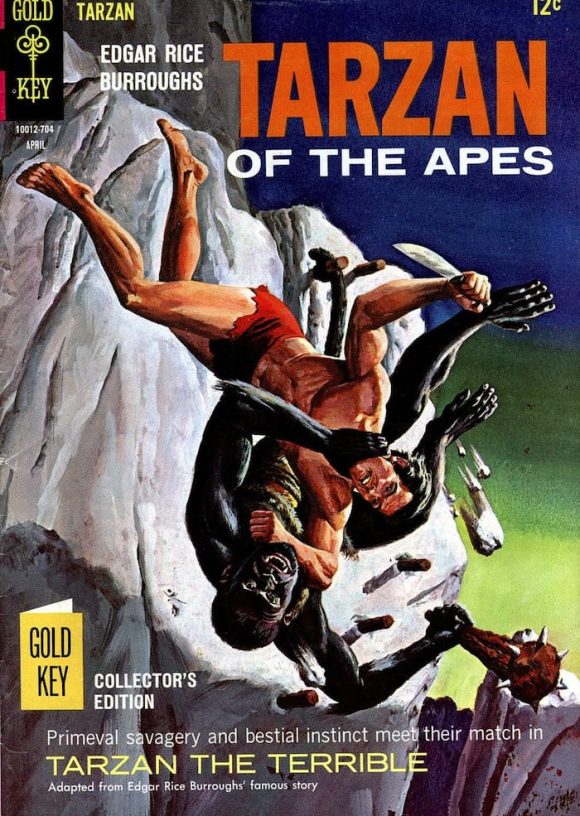 The Avengers #39, Marvel (Wild card selection). Justice League of America. Fantastic Four. The Avengers. If all I’d had in 1967 was a quarter and I was faced with being able to buy only two of those three team titles, I’d take my penny change along with my copies of JLA and The Avengers without a second thought. I loved the Avengers. The Don Heck covers during this period were killer (second only to a run of John Buscema covers a few years later), Roy Thomas was at the top of his game, and Goliath had one of the best costumes in comics. 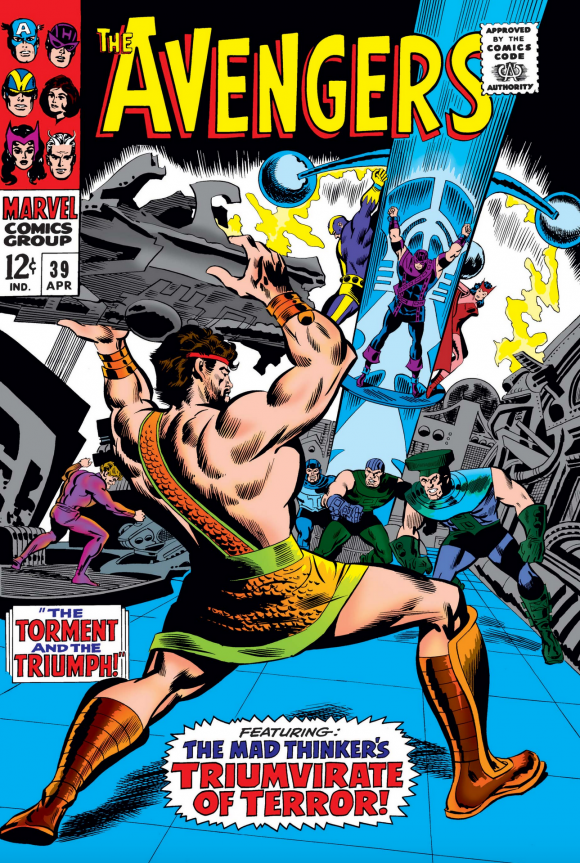 Strange Tales #156, Marvel (Wild card selection). Talk about capturing magic between two covers! Strange Tales was hot, co-featuring Doctor Strange and Nick Fury, Agent of S.H.I.E.L.D. When Steve Ditko left the Strange strip 10 issues earlier, there were those who thought it was over, but the Sorcerer Supreme managed to muddle on, first under Bill Everett, then Marie Severin. I could be wrong, but I seem to recall that Marie did a lot more inking than penciling in those days, so her run on Dr. Strange was a rare treat. But as cool as that was, all the hubbub at the time was for Jim Steranko, the new writer and artist on the S.H.I.E.L.D. strip who, after a few issues’ “apprenticeship” over Jack Kirby’s layouts, was doing his best to leave the King’s Marvel house style behind. 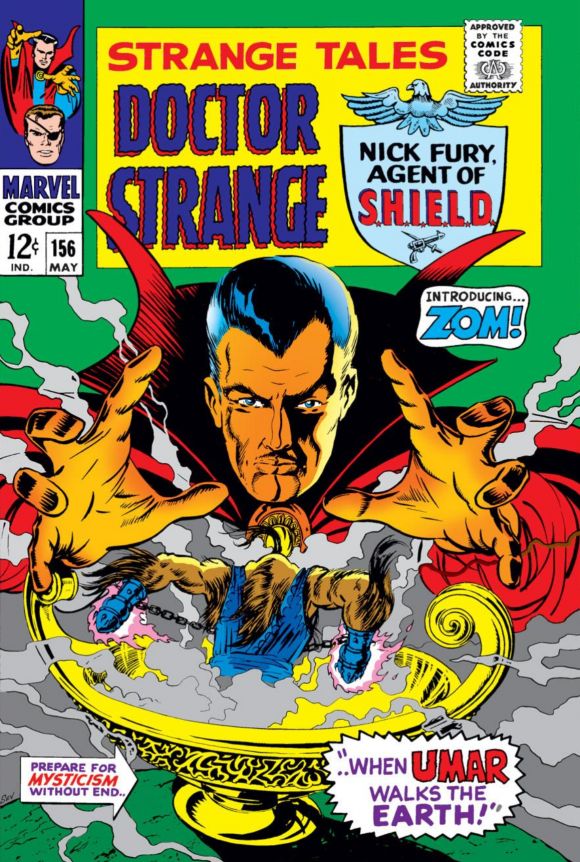 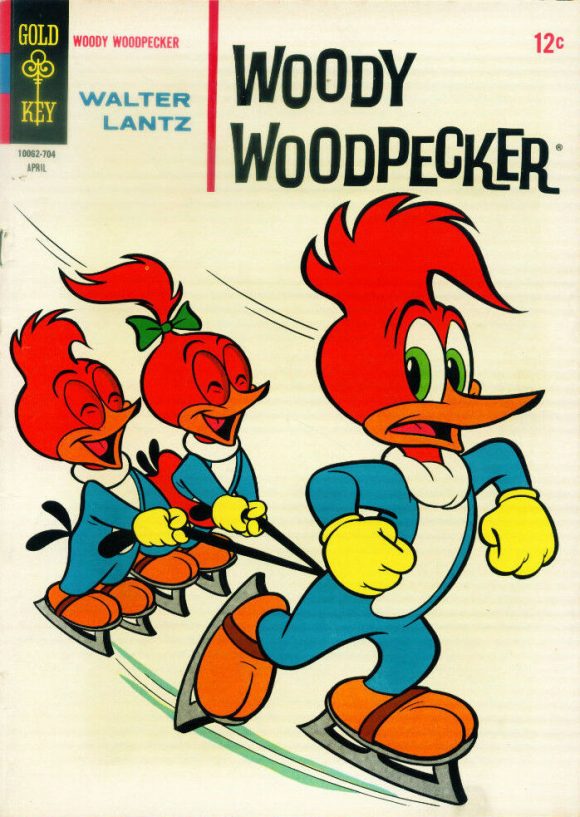 Detective Comics #362, DC (Wild card selection). You know what’s crazy about this comic? The Riddler was the villain — and they didn’t put him on the cover! It was 1967, for crying out loud! A puzzling (ahem) choice to say the least… 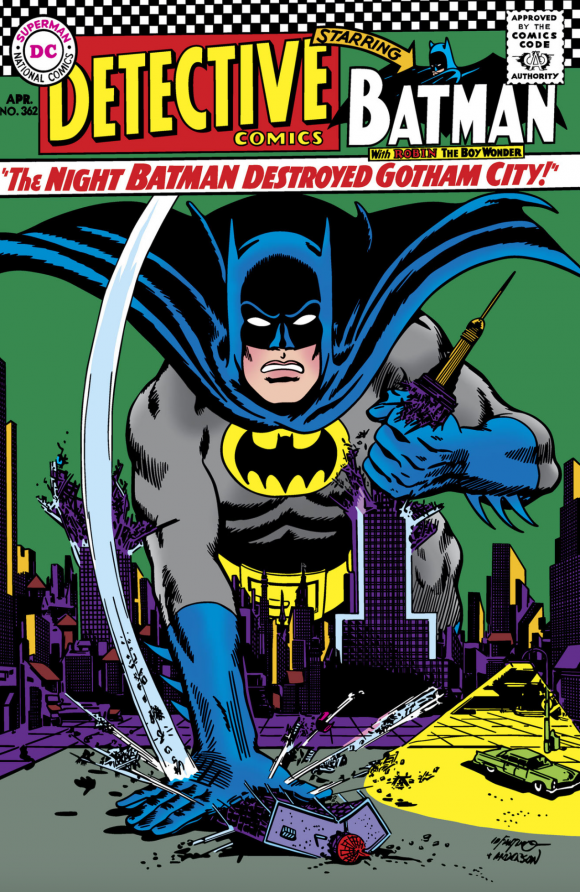 The Brave and the Bold #71, DC (Wild card selection). Batman/Green Arrow team-ups would become a B&B staple but they were far more interesting after Ollie’s angry, bearded makeover. Still, it’s Batman and so I have it! 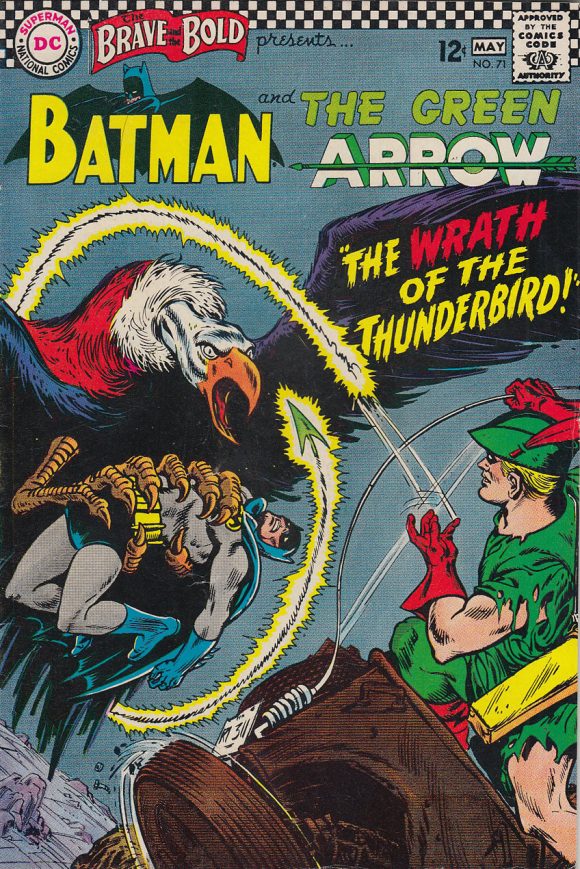 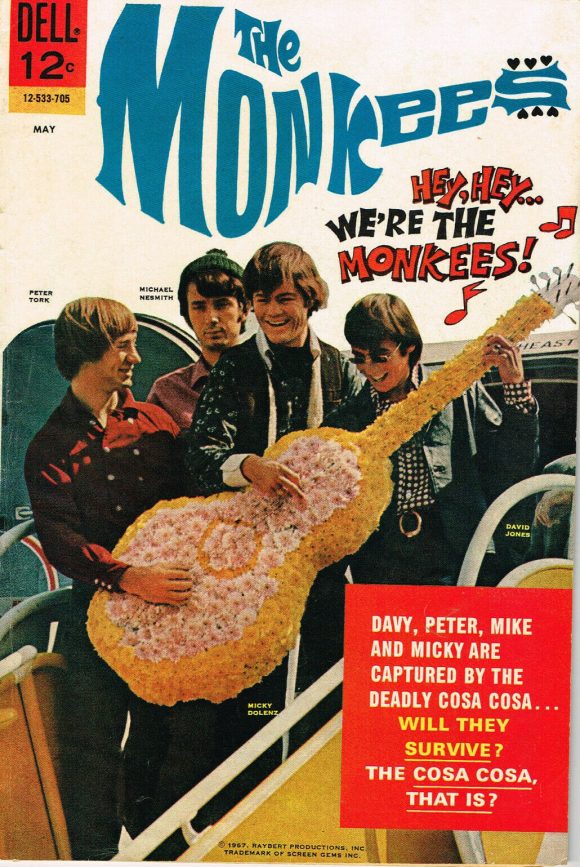 The Amazing Spider-Man #48, Marvel (Wild card selection). Truth in advertising. It literally is “the Vulture’s back.” 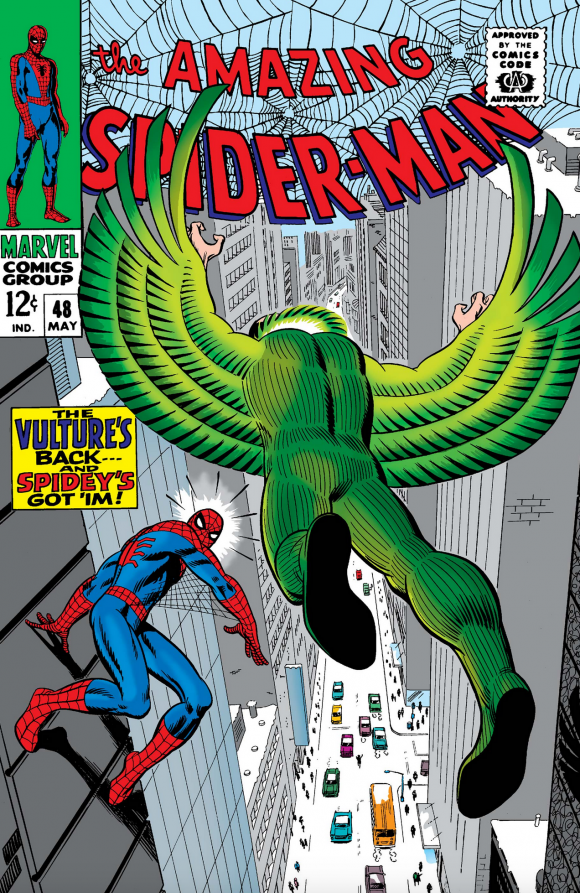 Dan adds: They call it the Silver Age but, man, this was the Golden Age of Spider-Man. Lee and Romita cranking it up; Pete vacillating between Gwen and MJ; Pete moving in with Harry; great villains in almost every issue; and Spidey being pushed to the brink, leading up to the famed Amazing Spider-Man #50. That Golden Age would extend well into the mid-’70s, if you ask me. By the way, that’s the second Vulture there — green-helmeted Blackie Drago. So, the Vulture’s not really “back” — is he, Scott, hmm?

The Flash #169, DC (Wild card selection). Five different crazy-ass Barry Allen body horror transformation stories in one issue? That would definitely have been worth my 25 cents. 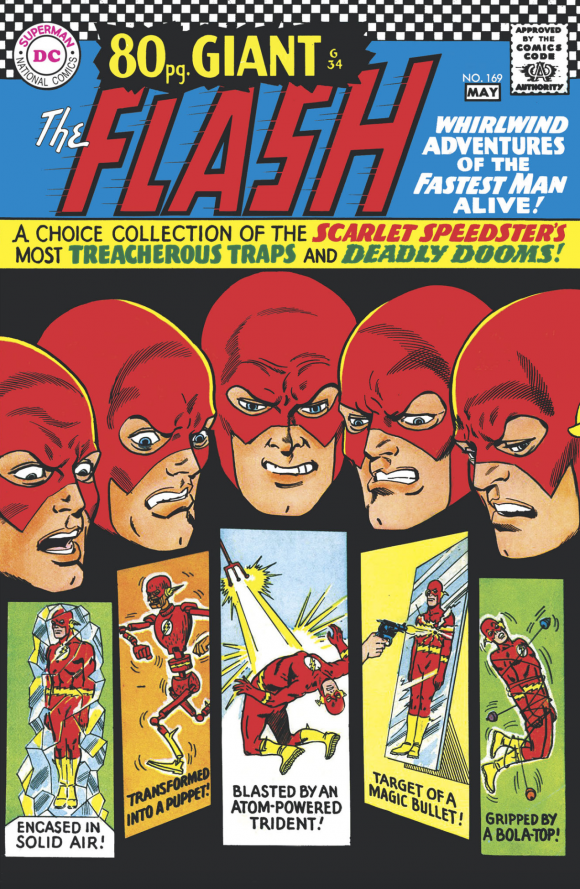