This week for RETRO HOT PICKS, Scott Tipton and I are selecting comics that came out the week of Oct. 6, 1962 — the furthest back we’ve gone yet!

(Keep in mind that comics came out on multiple days, so these are technically the comics that went on sale between Oct. 3 and Oct. 9.) 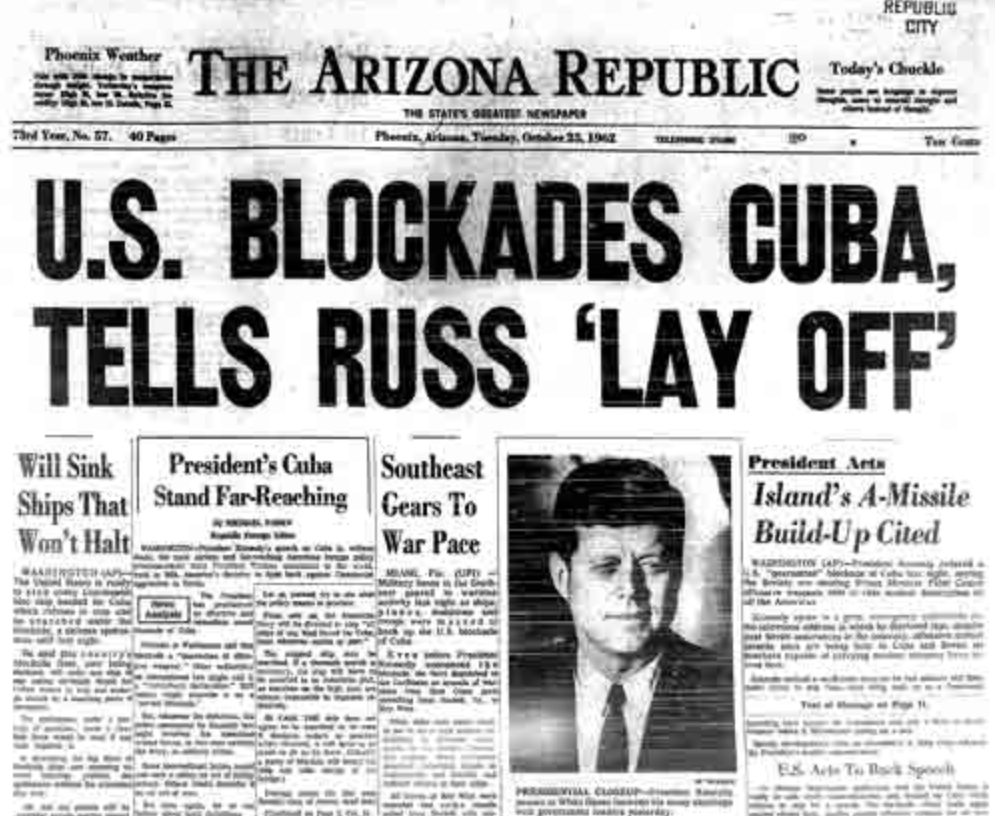 So, let’s set the scene: Boy, this was a time. President Kennedy just weeks before gave his famous “We choose to go to the moon” speech at Rice University in Houston. And in a mere couple weeks, Kennedy will tell the public that Soviet missiles had been discovered in Cuba — making public the terrifying Cuban Missile Crisis.

The Lucy Show, which premiered Oct. 1, was the top-rated show in America. (We used to call it “Lucy In Color.”) MGM’s The Wonderful World of the Brothers Grimm was the top hit at the box office, though The Music Man was also drawing them in.

The Four Seasons’ Sherry was their first No. 1 hit, but the most timely song was the Billboard 100 runner-up — Monster Mash, by Bobby “Boris” Pickett and the Crypt-Kickers. The rest of the Top 5 was rounded out by Nat King Cole’s Ramblin’ Rose, the infectious rocker Let’s Dance by Chris Montez, and Booker T. & the MGs’ all-time classic Green Onions. The West Side Story film soundtrack dominated album sales, with the top position on Billboard’s stereo and mono charts. (There were two back then.) 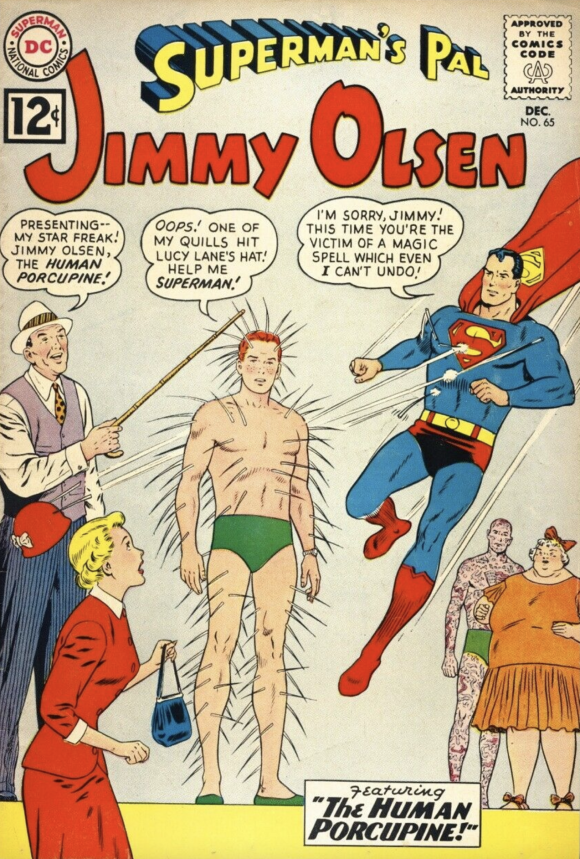 Dan adds: Jimmy as the Human Porcupine! A classic! 1962 knew the score…

Superboy #101, DC. Krypto transforms into a… ”handsome collie”? I’m just guessing that the TV show Lassie was big at the time. Poor Krypto has some low self-esteem. 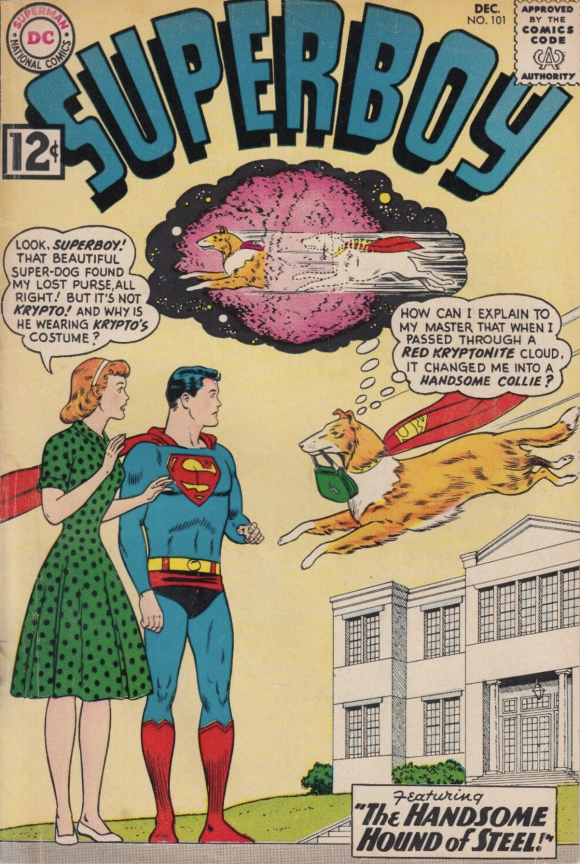 Dan adds: Lassie WAS big at the time. Did you realize that show ran from 1954 to 1973? Holy crap, I didn’t! Anyway, Krypto was plenty handsome before, but now he’s the Rock Hudson of dogs!

Fantastic Four #10, Marvel. You got 12 cents in your pocket and you’re totally enchanted by the new comics Marvel has been putting out. So how in the world could you ever pass up an issue where Doctor Doom joins the FF, Reed Richards goes rogue — and Jack Kirby and Stan Lee make an appearance? The answer is you couldn’t! BONUS: An Invisible Girl pin-up! 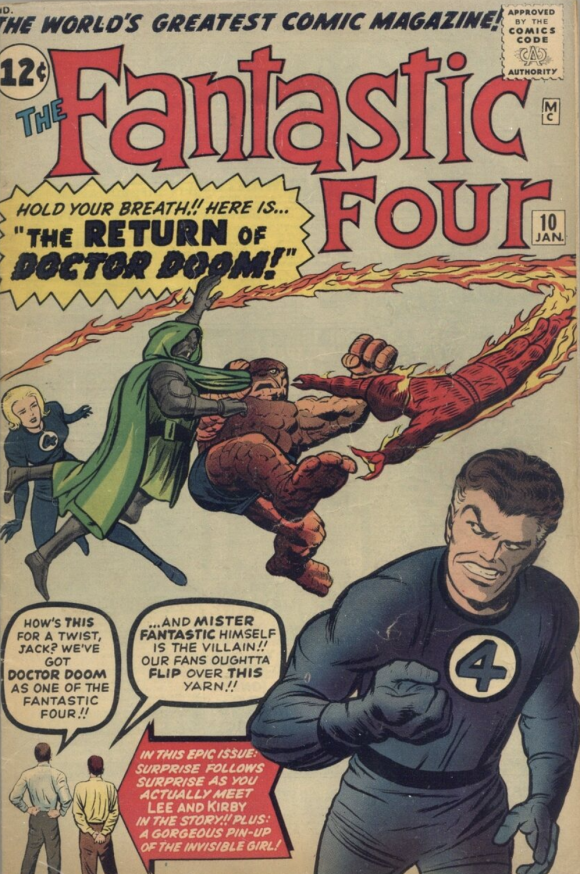 Scott adds: Great googly-moogly! That is one fiendish-looking Reed Richards.

Green Lantern #17, DC. Quick — which Hal Jordan outfit do you like better: black shoulders or green shoulders? I go with green shoulders but either way, Gil Kane came up with one of the all-time great superhero outfits. I also dig the typical Silver Age set-up of that cover (by Kane and inker Joe Giella). 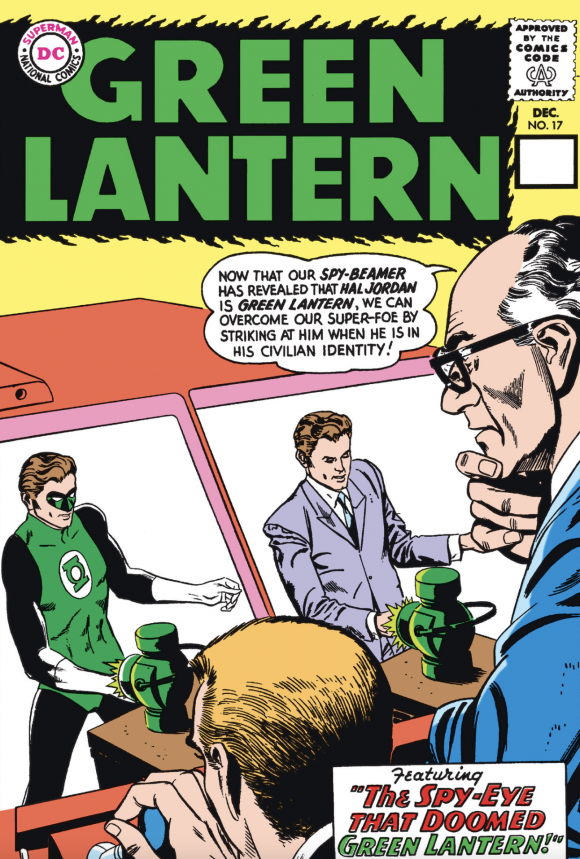 Scott adds: For an issue so early in its run, it has to be said that this is a pretty dull cover. It looks like Green Lantern is being stalked by his accountant.

Famous Monsters #20, Warren. Read about the man who saw King Kong 90 times! Before cable! Before VHS! Before Betamax! Before Laser Disc! Before DVDs! Before Blu-rays! Before streaming! The spoiler is that after 90 viewings of King Kong, you end up looking just like Lon Chaney in London After Midnight! (Thank you, Basil Gogos! Thank you!) 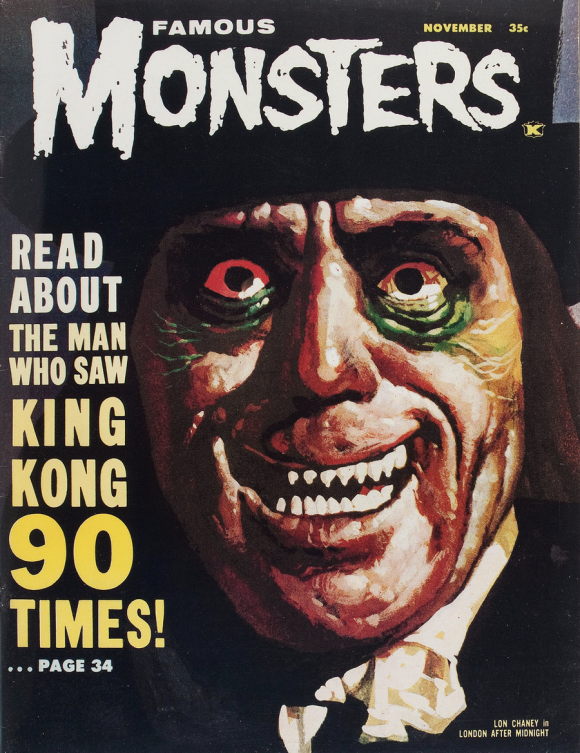 Our Army at War #125, DC. And just so you don’t get carried away with all the fun and fantasy, here’s a Sgt. Rock cover by Joe Kubert to remind you that war — and by extension, much of life — is hell. Sober up, kids! The rest of the ’60s are coming… 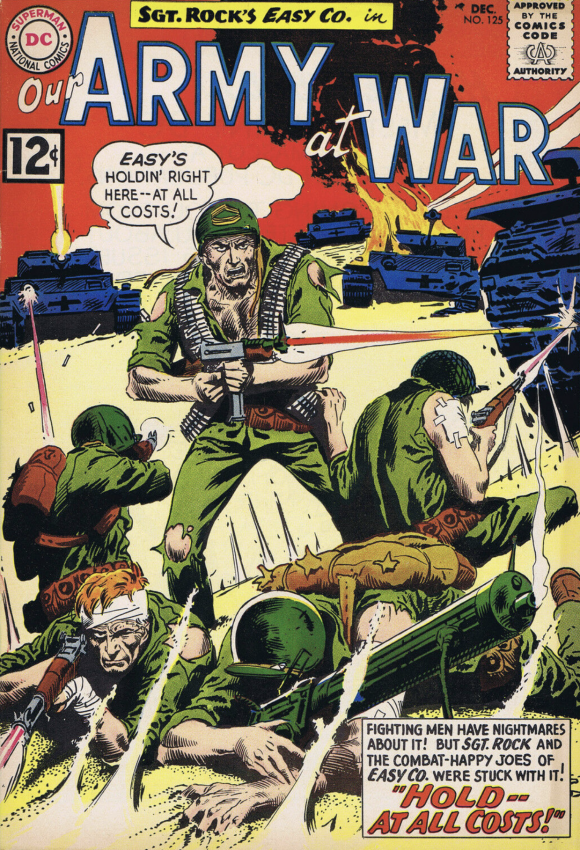