A YEAR-END SPECIAL: Scott and Dan hit up the comics racks from 80 years ago…

It’s the end of the year, so Scott and I have decided to do something we haven’t done yet in RETRO HOT PICKS — go back to the Golden Age. Not just the Golden Age, but a full 80 years ago to the week of Dec. 18, 1942, which, as you’ll see was an extraordinarily important week in the history of mankind.

And that’s not hyperbole either.

(Keep in mind that comics came out on multiple days, so these are technically the comics that went on sale between Dec. 25 and Dec. 31.) 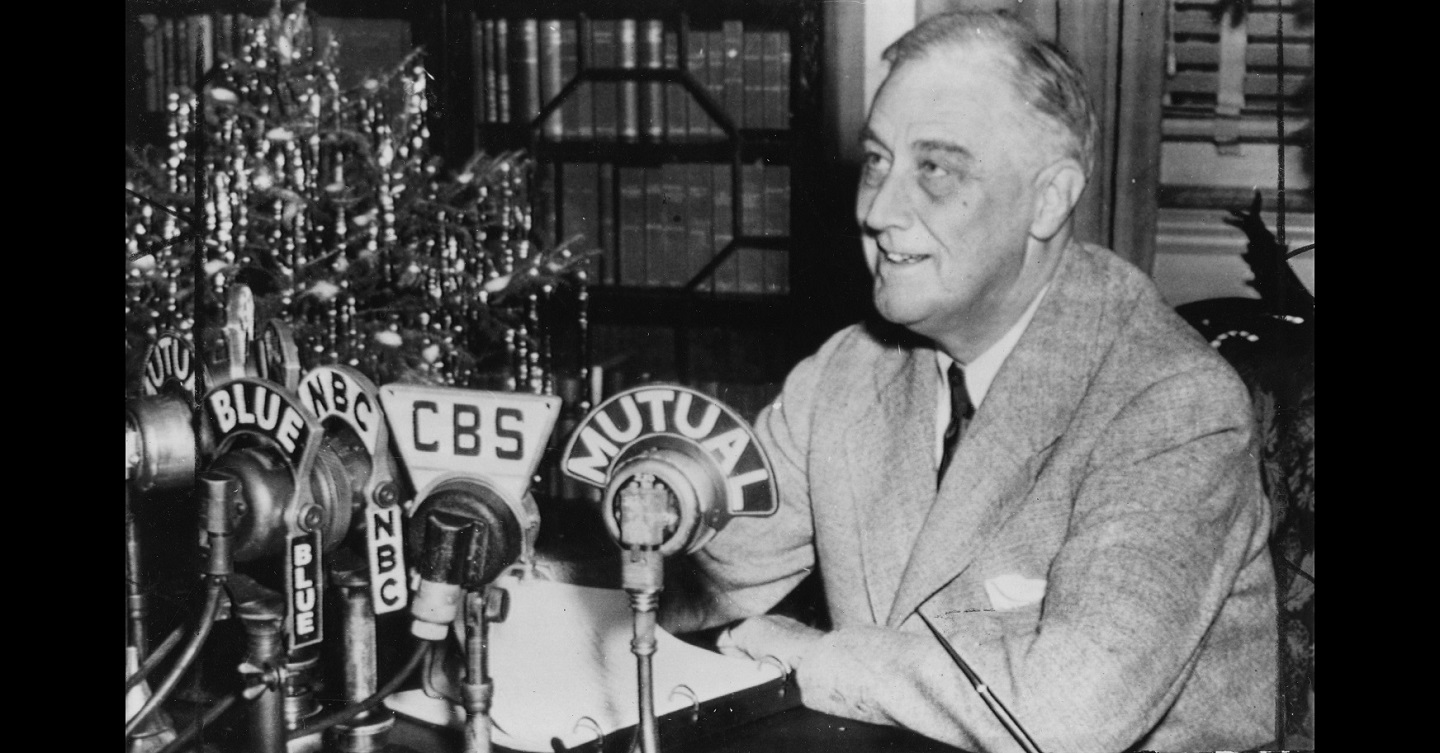 So, let’s set the scene: Franklin Delano Roosevelt was in his third presidential term and the world was at war. The Allies had gained a foothold in the Pacific and by Dec. 28, the Japanese had decided to abandon Guadalcanal after months of bloody fighting. It wasn’t clear until later but the battle proved to be a major turning point in the theater.

In Europe, the news was grim: In mid-December, the Allied nations condemned the Holocaust, the details of which were spreading, due in part to a Dec. 10 report from the exiled Polish government. On the American home front, gasoline rationing had begun.

In secret, however, the U.S. war effort was taking on a different dimension — one which would alter the course of human history: On Dec. 28, 1942, President Roosevelt gave final approval to the development of the atomic bomb, though by that time it was inevitable. 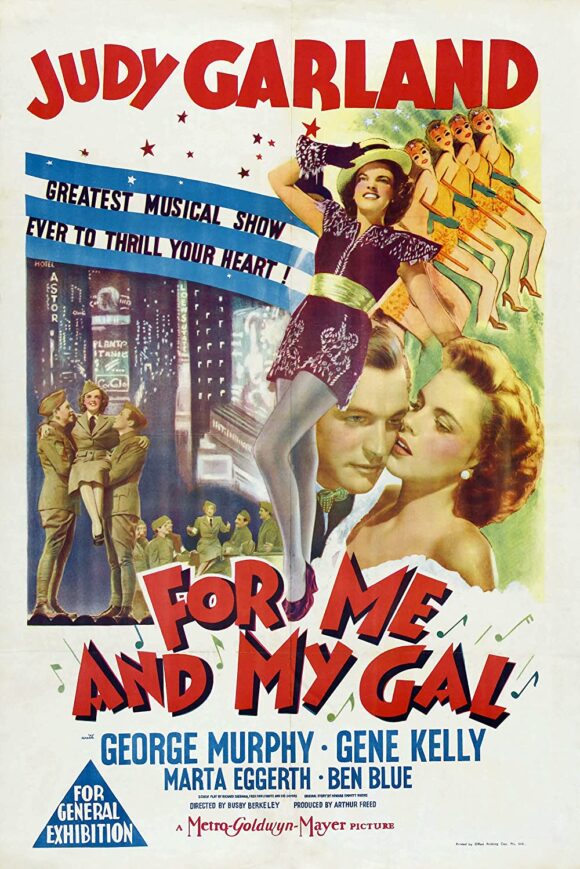 With World War II roaring, Americans at home looked for whatever diversions were practical, including the box office smash For Me and My Gal, which came out in October. The MGM musical was directed by Busby Berkeley and featured the first “adult” role for 19-year-old Judy Garland, as well as the screen debut of Broadway dancer and actor Gene Kelly.

Also worth noting: A wartime thriller starring Humphrey Bogart and Ingrid Bergman made its world premiere in Manhattan on Nov. 26, but Casablanca wouldn’t go into wide release until early 1943.

If you were a Superman fan and your local theater carried the famed animated shorts, you were in luck: A new entry, Destruction Inc., debuted on Christmas Day.

On the radio, listeners sought comic relief: According to Gold Time Radio, “Red Skelton shared top honors with Bob Hope as America’s most popular comedian in the 1942-43 season. … The top six shows in the season’s Top 50 were all comedy and all from NBC.”

The best-selling single in the U.S. was a song that would become one of the greatest of holiday standards — White Christmas, written by Irving Berlin for the film Holiday Inn and sung, of course, by Bing Crosby. Berlin’s album Song Hits From Holiday Inn, featuring Crosby and Fred Astaire, is considered one of the songwriter’s greatest works.

And now, the comics:

Superman #21, DC. One of the greatest covers starring the Man of Steel, by Jack Burnley. Inside, Superman battles fifth columnists, as well as other villains. 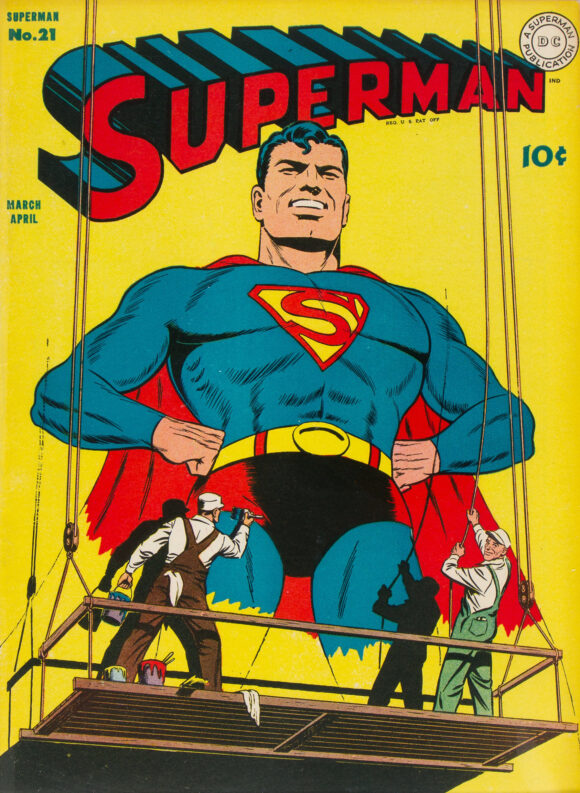 Scott adds: Look at that. Doesn’t get any more iconic. 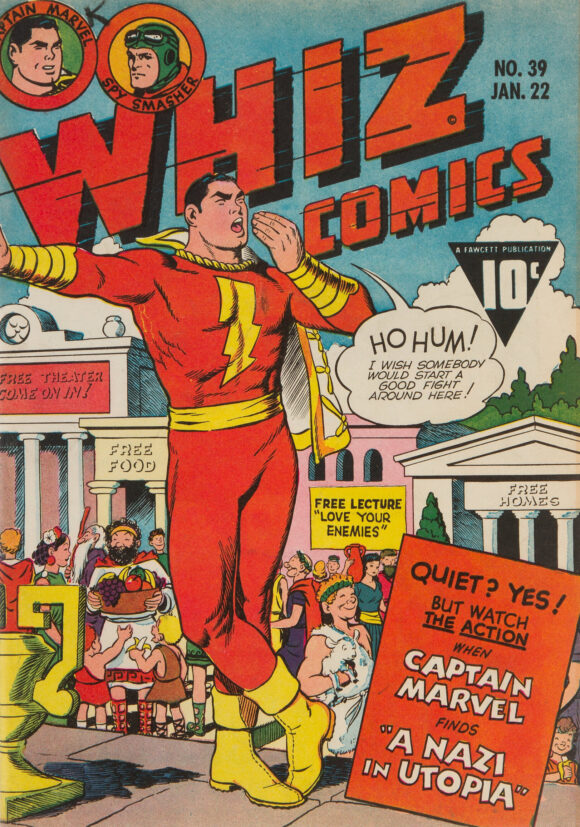 All-Winners Comics #7, Timely. The Human Torch, Captain America and the Sub-Mariner in solo stories behind a war propaganda cover of the three heroes bashing the Japanese and the Nazis. 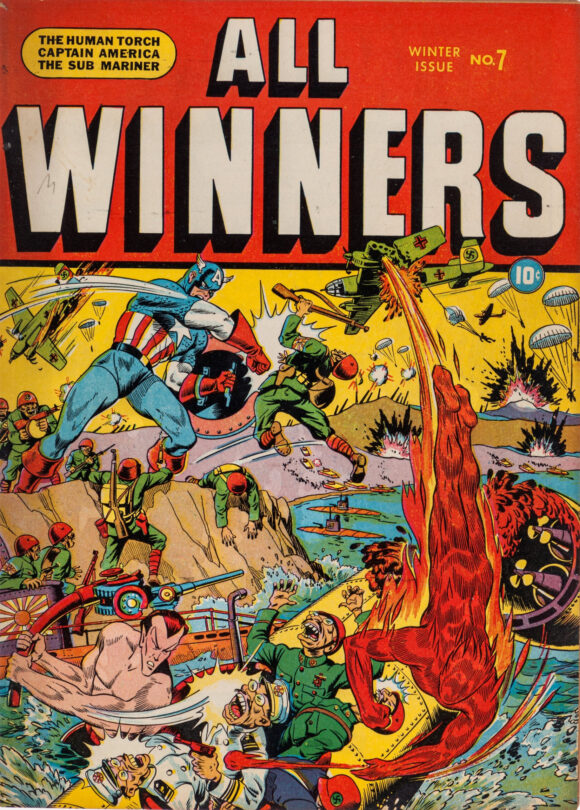 Batman #15, DC. Since this is a rare occasion, Scott and I allowed ourselves to pick comics that came out earlier in the month. After all, they were still likely available at the local soda shoppe. Anyway, this issue features the Dynamic Duo pursuing Catwoman, as well as a Christmas tale, “The Loneliest Men in the World.” 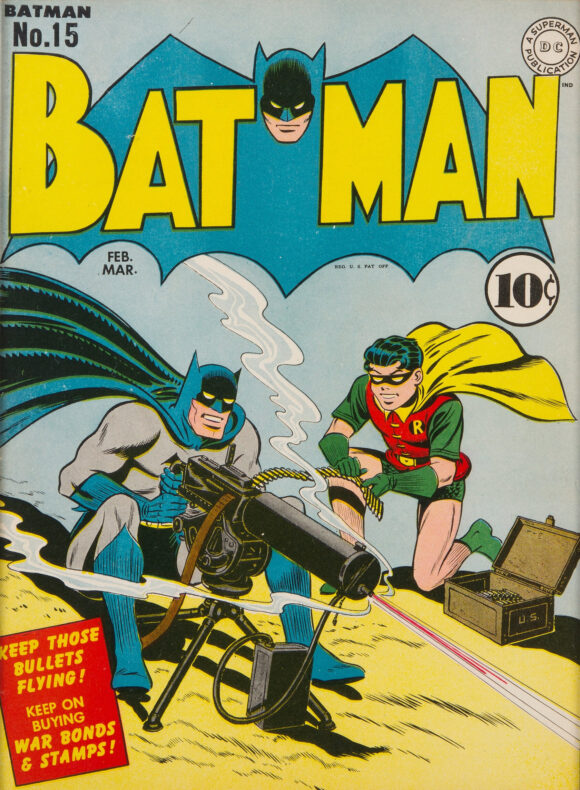 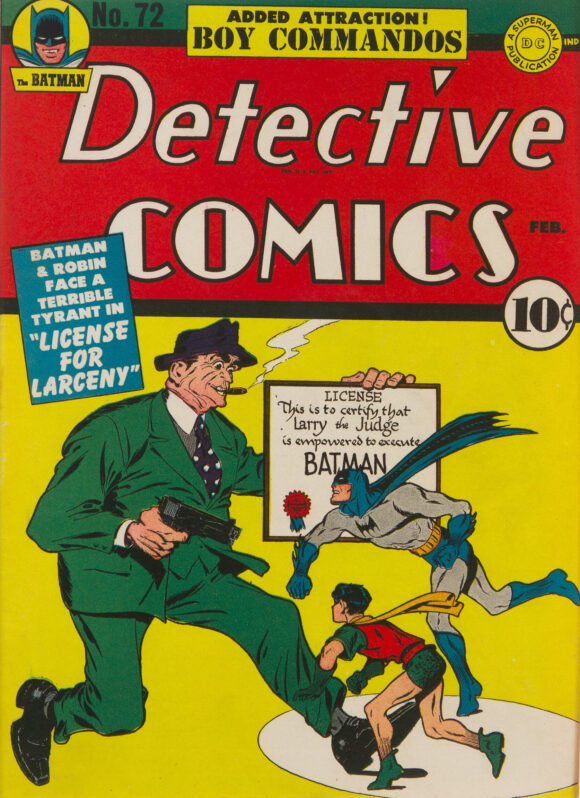 Comic Cavalcade #1, DC. The debut of the anthology mag starring Wonder Woman, Green Lantern, the Flash, Wildcat and others. (Came out earlier in the month.) 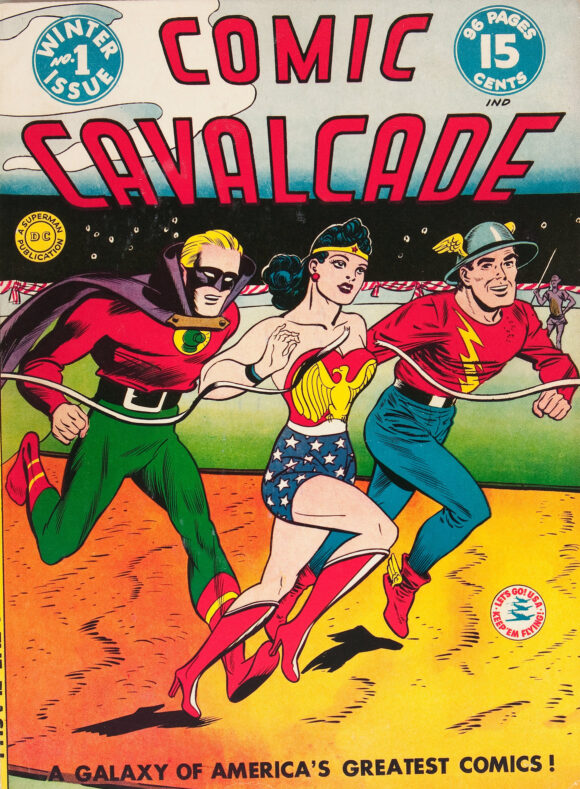 Master Comics #35, Fawcett. Mac Raboy’s Captain Marvel Junior covers are legendary, and this one is no exception. 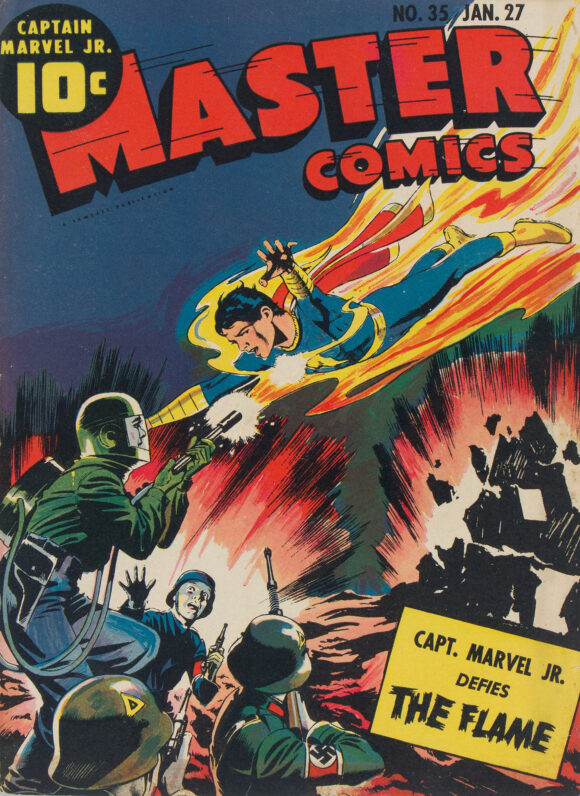 The Human Torch #10, Timely. For two guys who hated each other, these two sure hung around together a lot. Plus, for better or worse, Alex Schomburg’s work is synonymous with Timely’s output in the ‘40s. And Schomburg’s Namor was so distinctive-looking as to almost look alien. Look at that head. 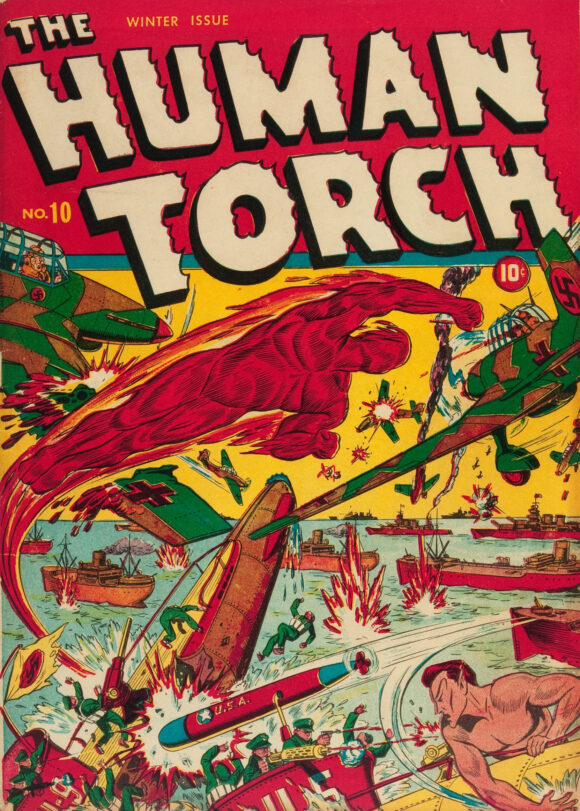 Sensation Comics #14, DC Comics. When Wonder Woman ties up goons, even the rabbits are impressed. (Earlier in the month.) 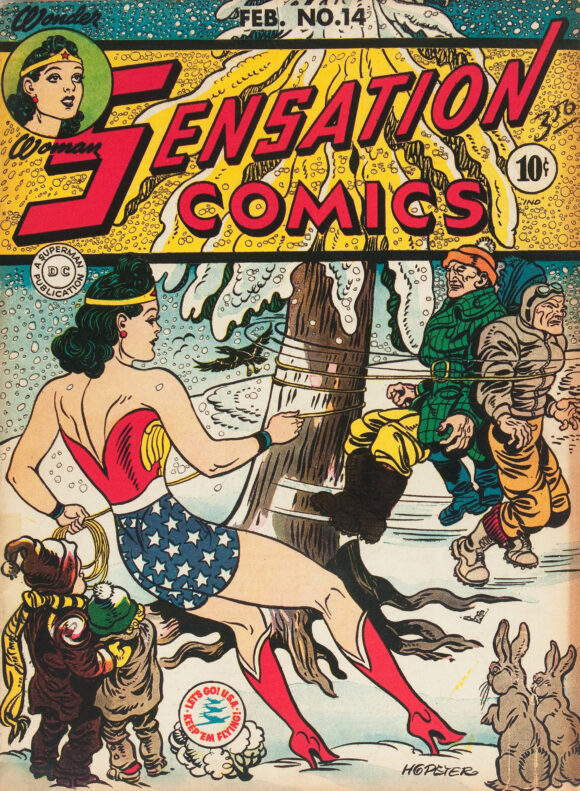 All-Star Comics #15, DC Comics. The debut of Brain Wave! Also, Wonder Woman gathers up the girlfriends of the JSAers and dresses them up in their boyfriends’ costumes. Seriously. (Earlier in the month.) 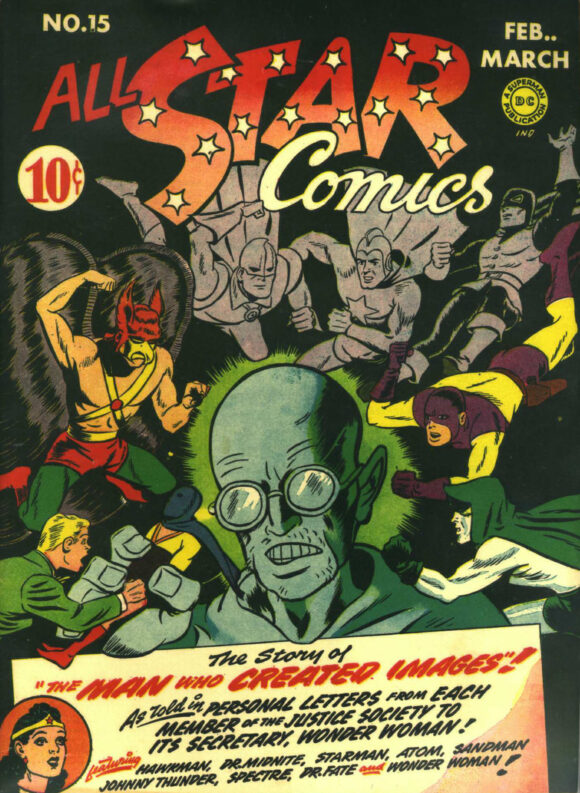 Flash Comics #38, DC Comics. I’m not sure why the Flash thought he needed a bamboo shoot to bust up the School of Crime. (Earlier in the month.) 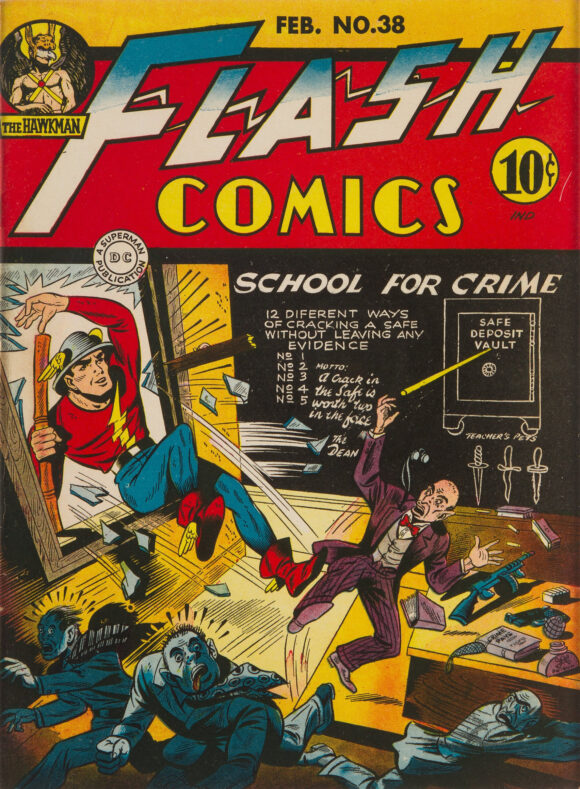 Captain Marvel Adventures #19, Fawcett. The Big Red Cheese and the Man With the Bag! This seemed like the perfect way to close out our final RETRO HOT PICKS of the year. Happy Holidays, everyone! Thanks for sticking with us for another year. 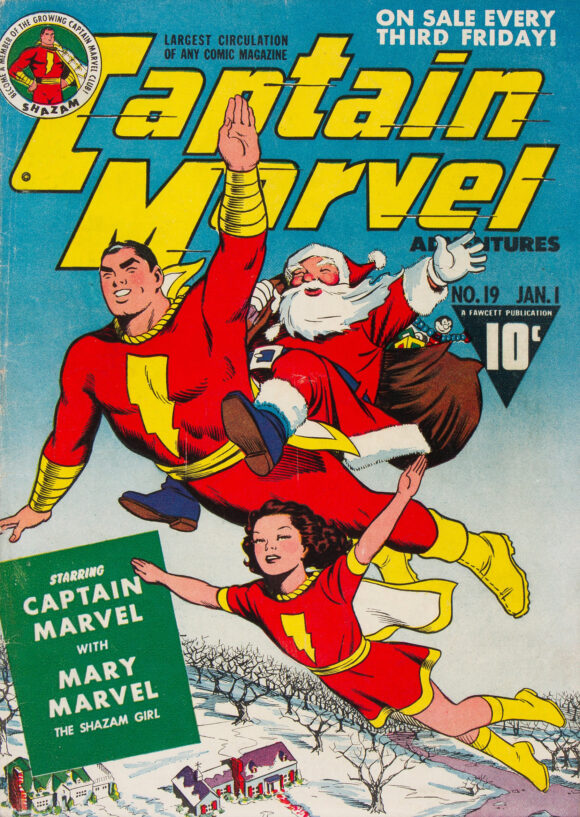 Dan adds: “Largest Circulation of Any Comic Magazine” (Released earlier in the month.)