Sometime around 1982, I don’t remember exactly, I was up at DC Comics’ offices at 75 Rock, dropping off some scripts and waiting to pick up a check from editor Julie Schwartz. He was off somewhere when I showed up, so I dropped my briefcase in his office and loitered in the corridor to wait for him.

Well, I never made it to the corridor. While I was putting my briefcase down, I’d glanced at the stack of art boards laying on top of Julie’s in-box.

It was the pencils for a Supergirl story by Winslow Mortimer that I had scripted for an upcoming issue of Superman Family. I scooped the pages from the desk and started flipping through them. It was the Master Jailer story from either #219 (June 1982), “Prison Bars Do Not a Cell Make,” or #220 (July 1982), “Battle Beneath the Brooklyn Bridge.” I had never seen the artist’s pencils before, only the finished pages after they had been lettered and inked by Vince Colletta. 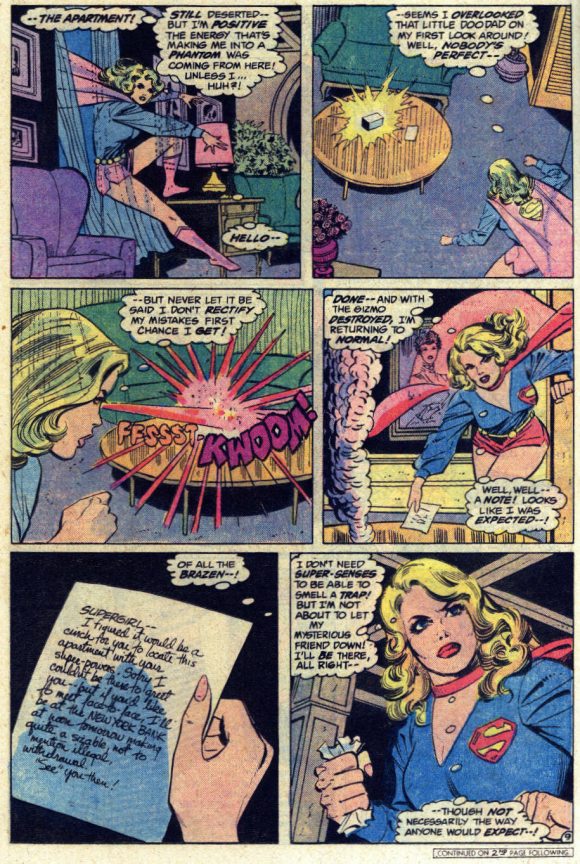 I’d always liked Win Mortimer’s work. I grew up on his mid-1960s output for DC Comics, mostly humor strips like Plastic Man, Stanley and His Monster, Fox and the Crow, The Adventures of Jerry Lewis and Scooter, but he also worked on the occasional superhero book like The Brave and the Bold and the Legion of Super-Heroes. I’d also spot stories by him in Gold Key horror titles like Boris Karloff’s Tales of Mystery and Ripley’s Believe it or Not.

Mortimer was already assigned to the Supergirl strip when I took it over from Martin Pasko with Superman Family #217 (Aug. 1982). I was thrilled to be working with him. One of the best parts of breaking into the comic business when I did in the mid-1970s was that most of the artists I grew up reading and admiring, many of them the founders of the business from the 1930s and 1940s, were still at their drawing boards. 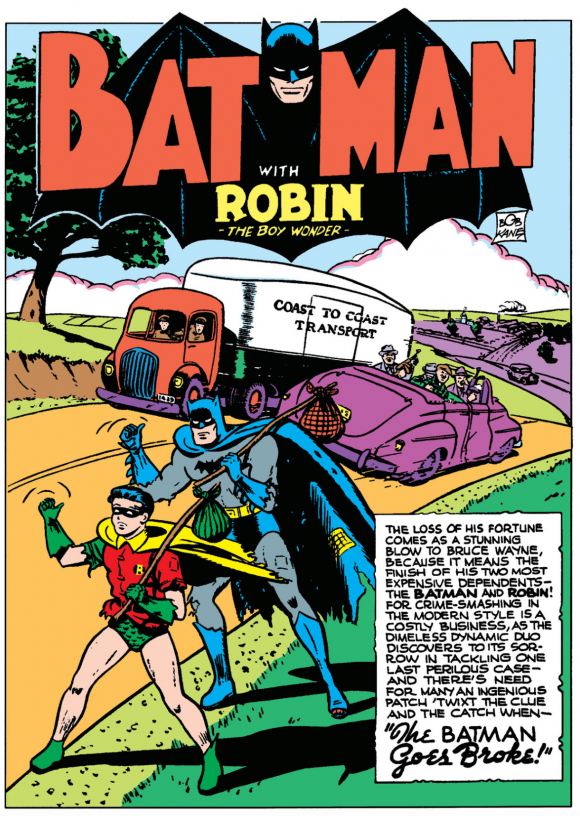 I could say a lot about Win Mortimer, recalling all the comics of his I read as a fan in the 1960s, as well as his fondly remembered ’70s run on Spidey Super Stories and his co-creation of Night Nurse at Marvel. In fact, I did, in an essay that was to appear in a book about the post-Joe Shuster Superman artists that is not, unfortunately, to be published after all. Instead, I’ve cannibalized some of it for this birthday tribute, but you can read the rest of the story over on my website, PaulKupperberg.com.

For our purposes here, however, we’re going to focus on covers, because between April 1946 and June 1956, Win was DC’s lead cover artist, creating some 350 covers for titles across the board.

Star-Spangled Comics #65 (Feb. 1947). The cover that introduced “a thrilling new series of smash adventures starring Batman’s famed partner in peril, Robin the Boy Wonder in solo action!” Talk about an in-your-face design; Robin is literally stepping out from Batman’s shadow to take center stage in his own feature. Simple and sweet. 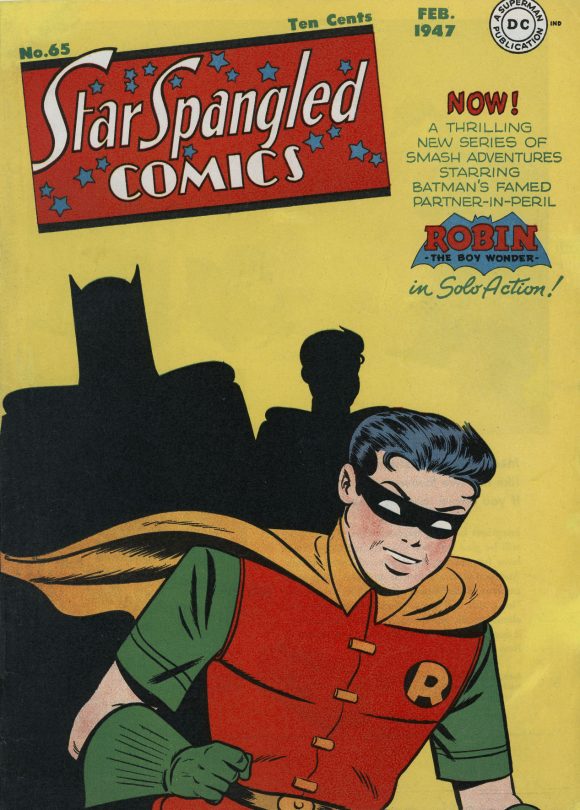 Mr. District Attorney #3 (May/June 1948). A picture is worth a thousand words, or sometimes even a nine-page comic book story like “In this Corner — Death!” (by Ed Herron, Ed Dobrotka and Charles Paris). Once again, the concept is simple, literal and beautifully executed by Win. 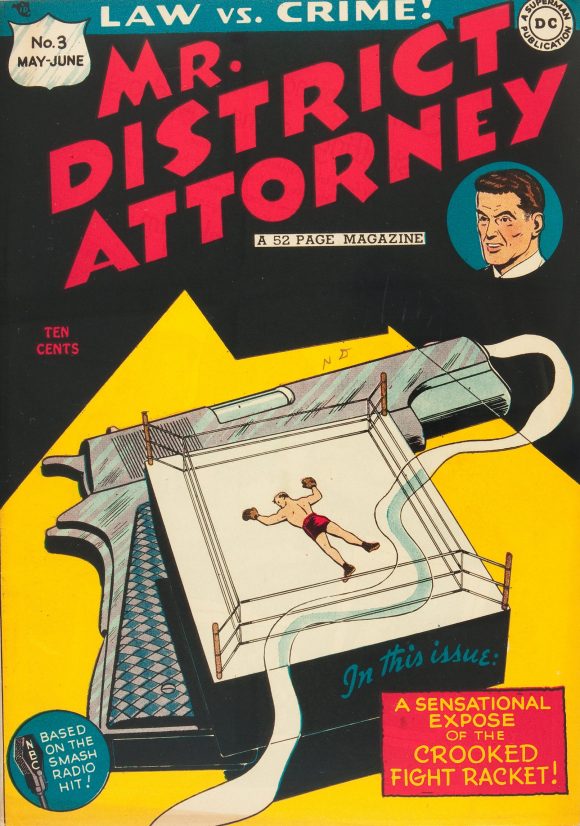 Batman #52 (April/May 1949). Modern comic covers tend to be pin-up shots, but before the direct market and the internet, covers were point-of-purchase sales tools, designed not so much to be suitable for framing but to intrigue and attract eyes on crowded newsstands. Win’s clear, uncluttered designs could be counted on to do that every time. 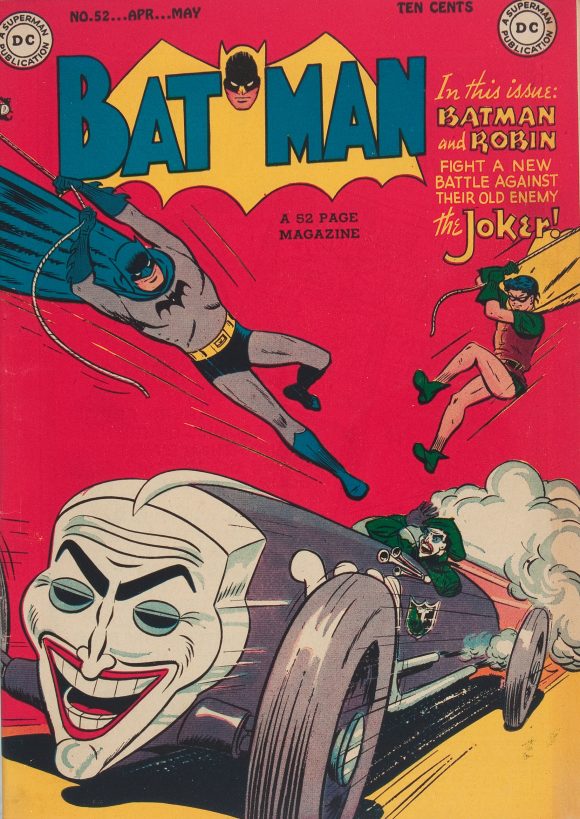 Action Comics #149 (Oct. 1950). From the look of anguish on Superman’s face, Lois has gone too far this time in her obsessive (psychotic?) pursuit to trick Superman into marrying her. SPOILER: She doesn’t! In fact, beyond the idea that Lois conveniently/coincidentally gets her hands on Kryptonian “home movies” of the courtship of Jor-El and Lara (labeled in English), this Mortimer cover has little to do with the Wayne Boring-drawn story it represents. Superman is anything but upset to see the films of his parents and doesn’t even realize that Lois was trying to trick him, and she’s once again hoisted on the petard of her own duplicity. It was typical fare of the era, but a story actually based on the cover would have been better. World’s Finest Comics #43 (Dec. 1949/Jan. 1950). Speaking of typical fare of the time, the oversized World’s Finest routinely sported gag covers that featured title’s co-stars (then still in separate features): Superman, Batman and Robin. A common theme was the young Robin besting his embarrassed grown-up pals in whatever activity they were engaged in. The results, especially when drawn by Win, were unfailingly silly but entirely charming and, more importantly, attractive to 8- to 13-year-olds dreaming of showing up the grown-ups in their lives. 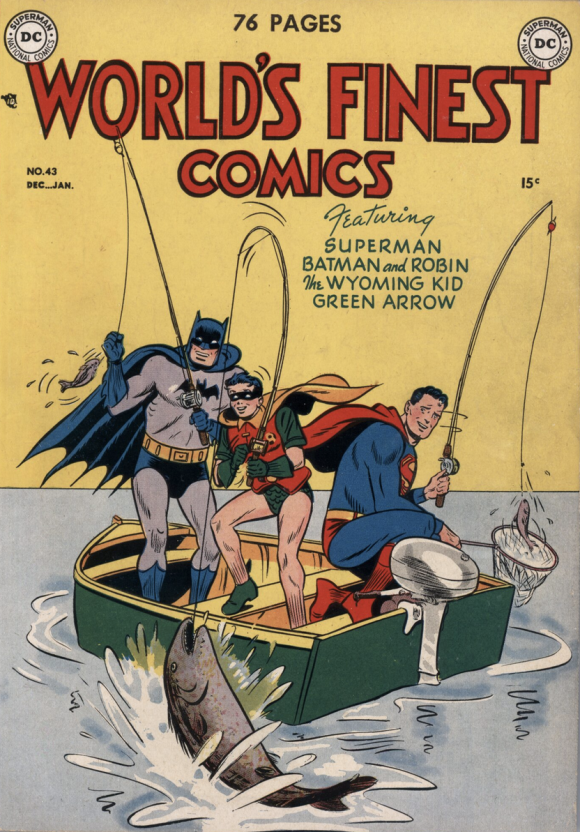 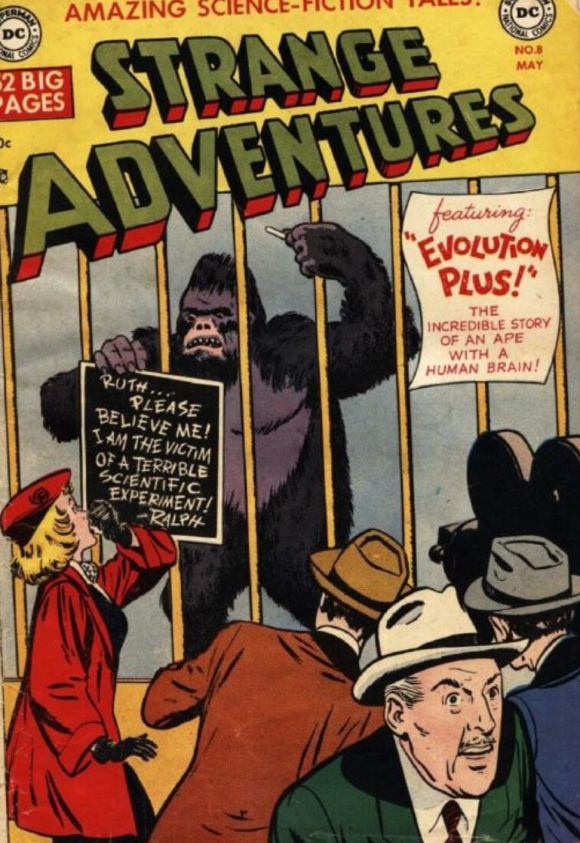 Action Comics #165 (Feb. 1952). DC didn’t used to go for a lot of overt violence on their covers. They relied largely on gimmicks and intriguing situations to catch the reader’s eye; you were more likely to see the lead up to or the aftermath of a violent situation than the actual violence itself. But Win was right up there with Superman artists like Curt Swan and Wayne Boring when it came time to bring serious impact to a scene. 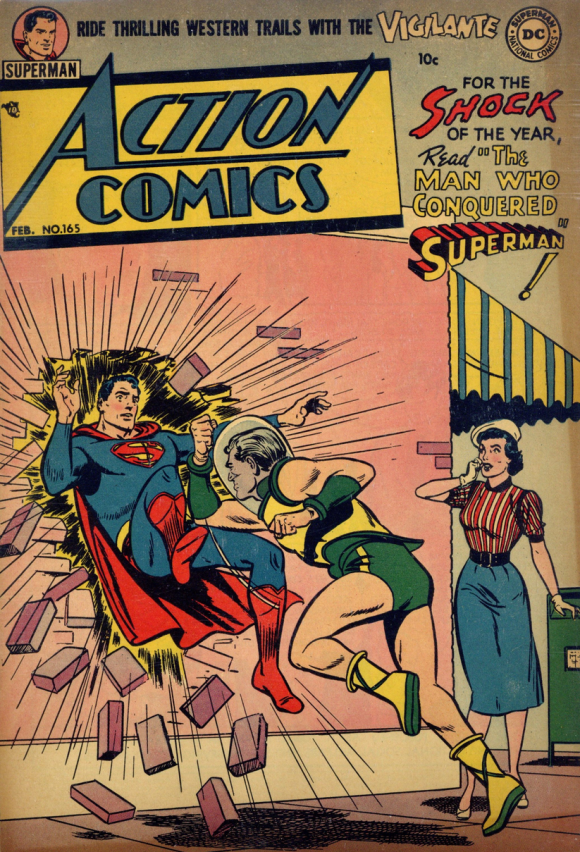 Superman #76 (May/June 1952). Despite all those World’s Finest covers the Man of Steel and the Caped Crusader shared over the years, they never actually, officially teamed up for an adventure until this 1952 story, under a classic Win Mortimer cover. 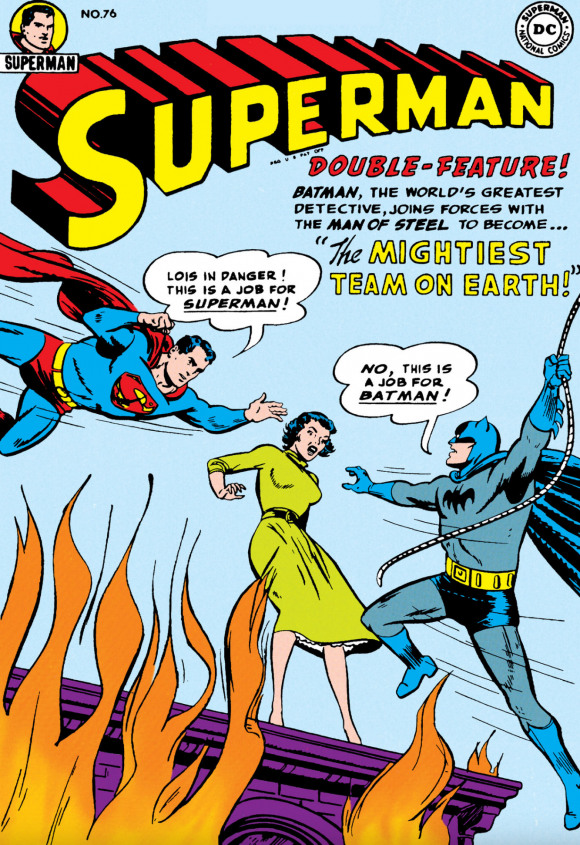 Batman #72 (Aug./Sept. 1952). Me Batman, you Robin! I love this cover, but why the masks? Who are they hiding their secret identities from in the jungle? 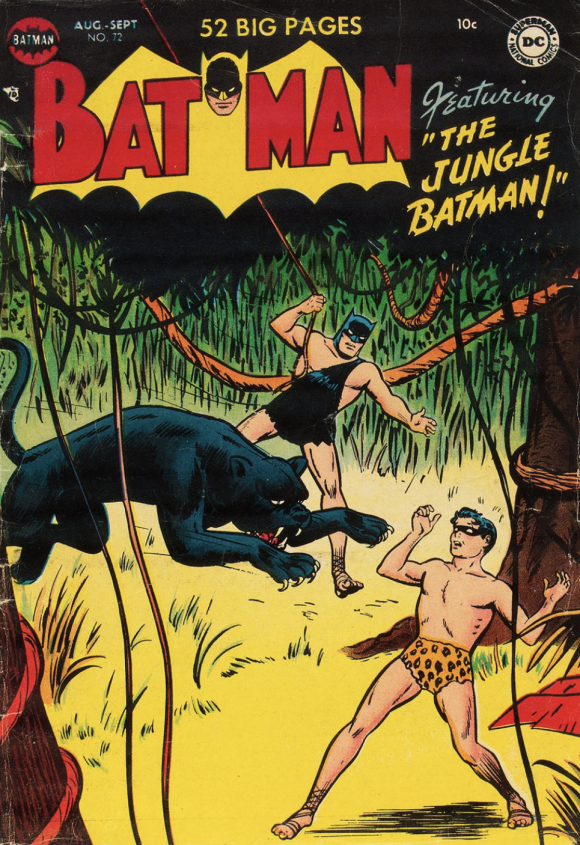 Adventure Comics #182 (Nov. 1952). Do I have to explain how awesome this one is? Win angled the shot from above, emphasizing the dizzying height, fitting five figures into the scene, along with a skyscraper roof, and an entire city block in the background without having to crowd the elements or cheat to sell the scene. It’s as sweet a bit of storytelling in a single image as I’ve ever seen. 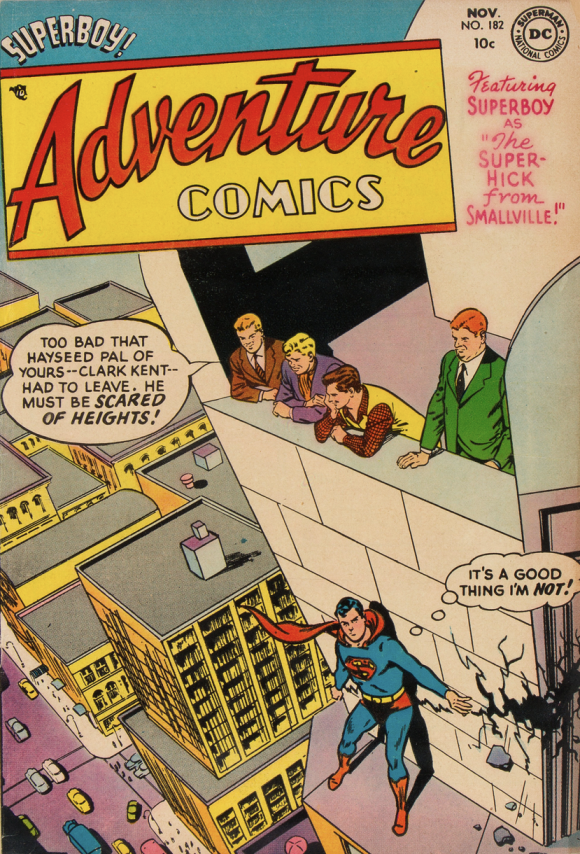 World’s Finest Comics #64 (May/June 1953). A scaled down Times Square is the setting for this Dynamic Duo/Action Ace buddy scene. You can actually see the same scene in the real Times Square these days, except now it’s a bunch of guys in moth-eaten costumes trying to get tourists to pay them to pose for pictures. 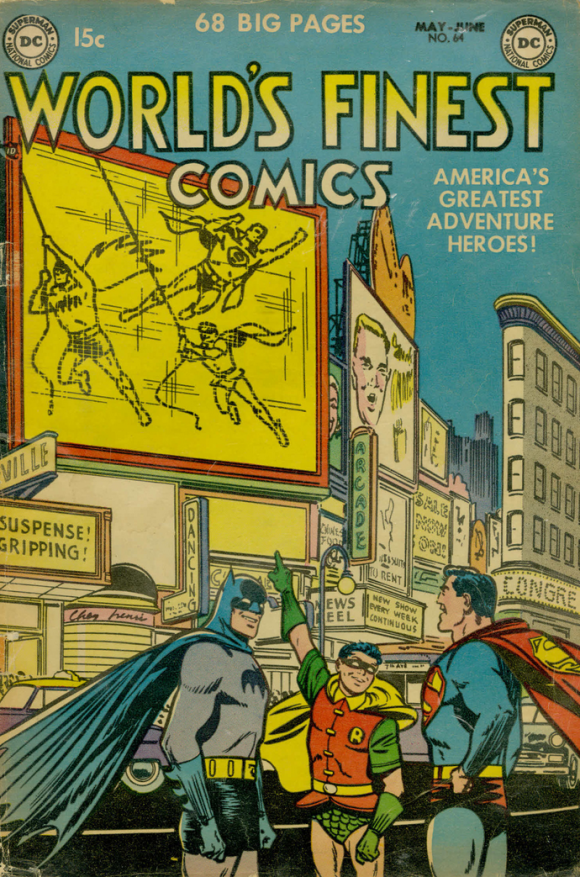 Superboy #30 (Jan. 1954). Giant Turtle Guy? Check! Bridge in scene to show scale? Check! No disrespect to the magnificent Curt Swan/Stan Kaye cover to Superman’s Pal, Jimmy Olsen #53 — “The Giant Turtle-Man” — but Win Mortimer got there more than six years earlier… also, coincidentally, inked by Stan Kaye in a rare instance of Win being inked by someone else in those days. Action Comics #206 (July 1955). He doesn’t actually, but how downright beautiful is Win’s cover to “Superman Marries Lois Lane”? On it, Superman flies off with his bride, an adoring Lois Lane in a beautiful wedding gown in his arms, up, up, and away over the heads of a streamer- and rice-throwing horde of guests below. Win’s women (and girl) characters were realistic and relatable, but they were always pretty and petite, with a touch of the illustrator’s glamour. Bon voyage, you crazy kids! 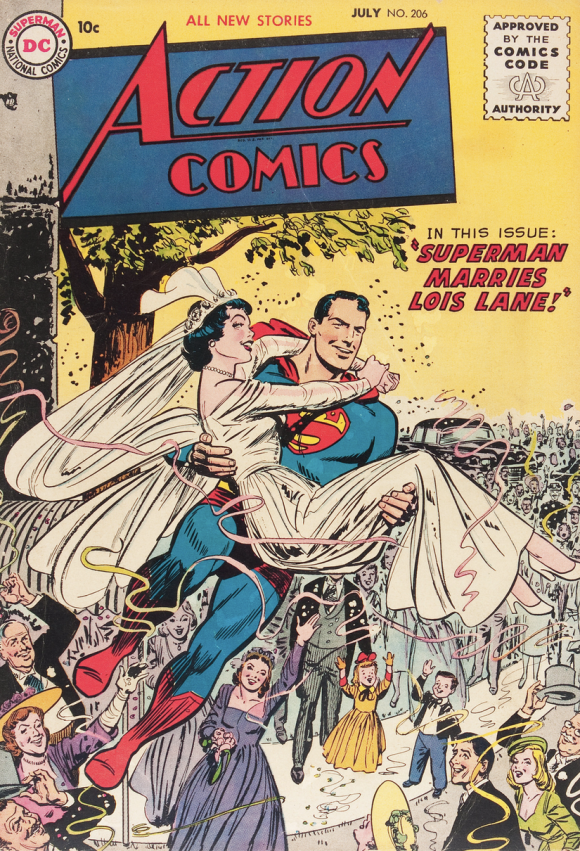 Also, check out his latest — Son of the Unpublished Comic Book Scripts of Paul Kupperberg. (Click here to order!)