A BIRTHDAY SALUTE: The celebrated Mr. K pays homage to the classic artist, who was born 105 years ago… 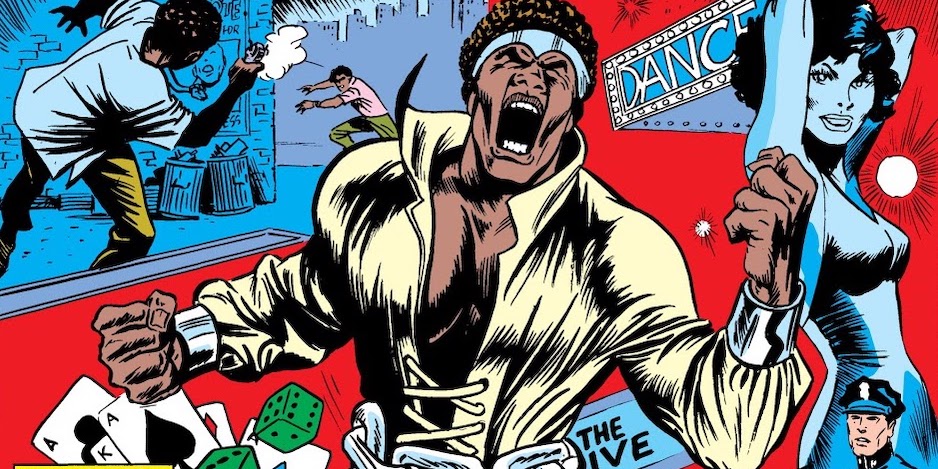 At one time, during the 1950s, George Tuska (April 26, 1916-Oct. 16, 2009) was the artist other artists wanted to draw like. And many did, aping his unique style and dynamic layouts; some, like Atlas and Charlton Comics creator Pete Morisi (P.A.M.), admired George so much, he wrote asking the artist’s permission to swipe him, according to the story as told to me by Pete in the early ’90s.

It had taken George a while to find that style. His early work for publishers like Fox and Fawcett beginning in 1939 was pretty generic for the time, but by the end of the 1940s, he was starting to stand out from the crowd. By the mid-1950s, he had hit upon the style that would mark his art for the rest of his career. 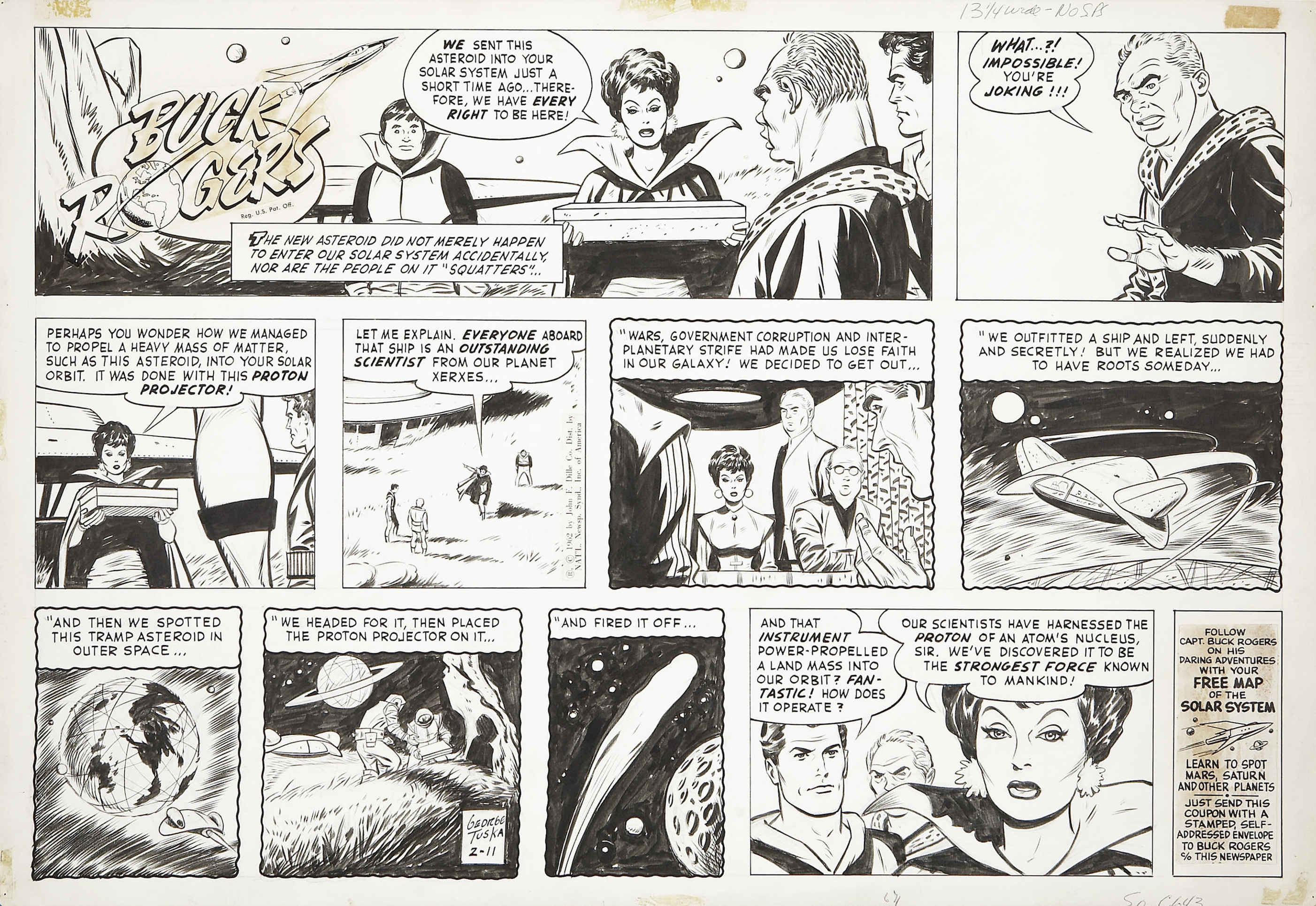 George drew just about everything, from superheroes to horror to romance and Westerns and war. I don’t think he ever did any straight up humor comics, but he certainly wasn’t shy about injecting a little humor into his work. Maybe he picked up his lighthearted touch from his time on Captain Marvel but check out the page from 1956’s “Slap Leather” — six panels that almost didn’t need dialogue to convey the action.

I made three of my 13 picks stories that I was fortunate enough to work on with George but two of them would have made it onto the list no matter who the writer had been. The third one is definitely self-indulgent, but wouldn’t you want to show off if George had drawn your stories?

Here then, on the 105th anniversary of the Hartford-born artist’s birth, are MY 13 FAVORITE GEORGE TUSKA COMICS AND COVERS, in chronological order:

Mystery Men #1 (Fox, Aug. 1939). Hocus pocus and Zanzibar the Magician, one of early comics’ many magical/mystical/mental heroes. George’s early art was competent and fairly standard issue for the time, but without much of a hint of the artist to come. Still, kudos to whoever decided to shake things up and give Zanzibar a fez instead of the usual top hat. 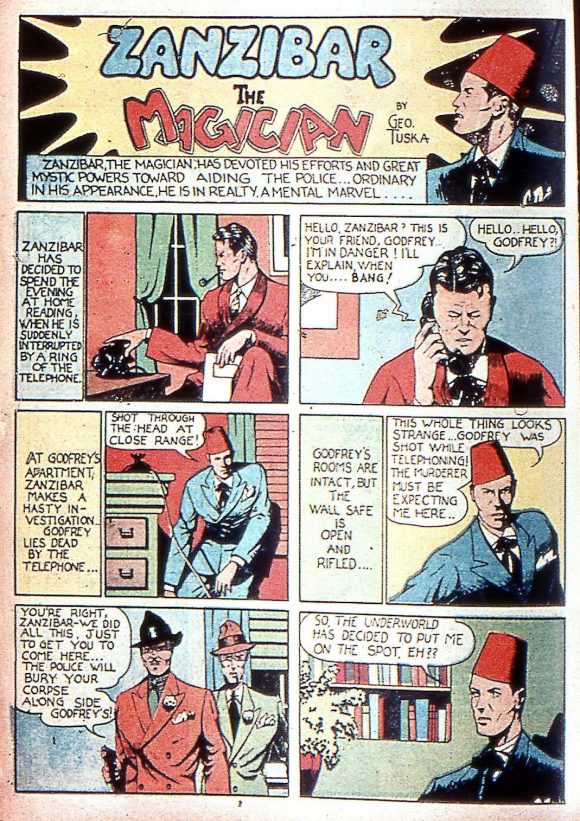 Captain Marvel Adventures #4 (Fawcett, Oct. 1941). Tuska was still learning his way around a comic-book page when he started working on the Captain Marvel strip for Fawcett Comics. Cap, co-created by Bill Parker and C.C. Beck, would become the bestselling superhero comic of the 1940s, outselling Superman at its peak circulation of some 1.3 million copies a month. 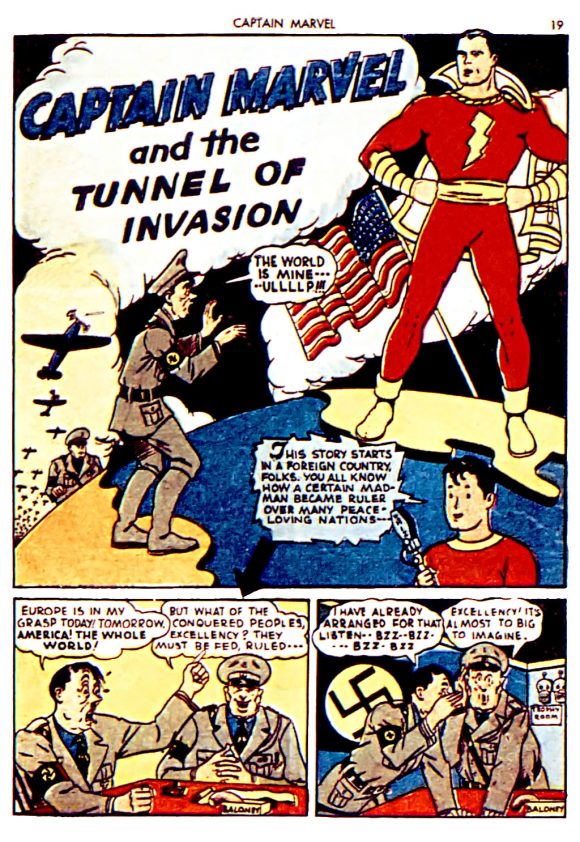 My Own Romance #10 (Atlas, Dec. 1949). Jumping ahead a few years, George found steady employment in the post-superhero era of the 1940s and 1950s in just about every genre except, as far as I can tell, humor. By this time, he had pretty much locked in on his distinctive style; there was no mistaking a George Tuska character for anyone else’s work. 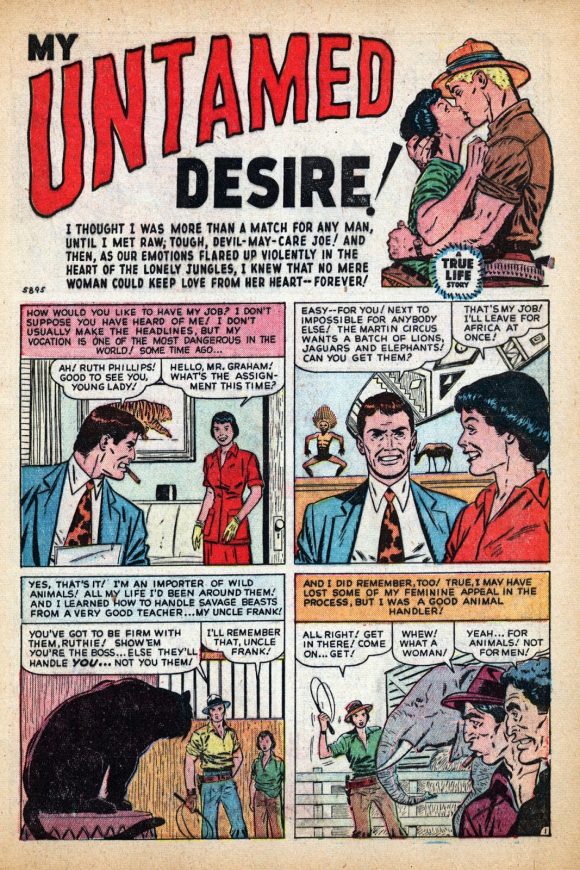 Crime Does Not Pay #131 (Lev Gleason, Feb. 1954). Lev Gleason created a whole new genre of “true crime” comics, stories about criminals and killers of every sort that were perfectly suited for Tuska’s talents. Not to take anything away from his superhero comics, but Tuska was at his best drawing real world situations and people in street clothes; his depictions of mean, bucktoothed criminals, roughnecks and thugs couldn’t be beat. 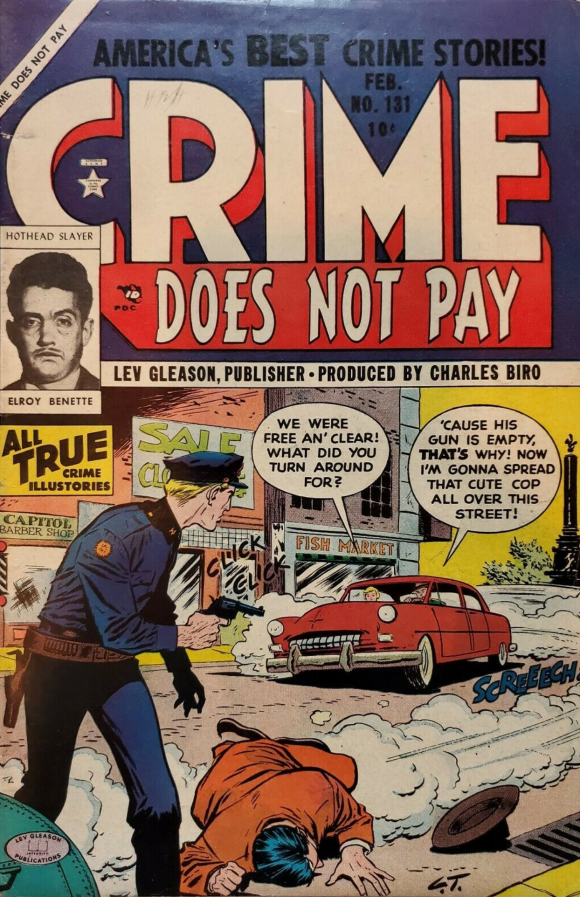 Kid Colt Outlaw #63 (Atlas, Sept. 1956). There’s a whole lesson in storytelling in the last page of “Slap Leather,” a back-up story scripted by Stan Lee. There’s an almost Alex Toth-level of minimalism and delicacy to this story, leaving out anything, including backgrounds, that would detract from the beautifully rendered facial expressions of the antagonists. 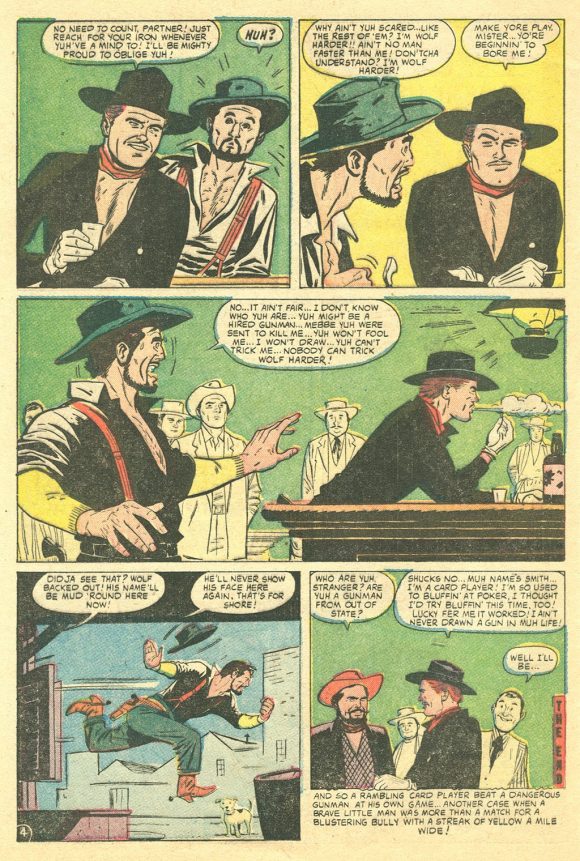 Creepy #8 (Warren, April 1966). George Tuska, in glorious black and white from an early issue of Warren’s Creepy magazine. Creepy and its companion title, Eerie, were in their own way, the 1960s successor to the legendary EC Comics of the 1950s. In fact, many of the EC artists (Wally Wood, Joe Orlando, Al Williamson, Angelo Torres, to name a few) would also do extensive work for Warren. 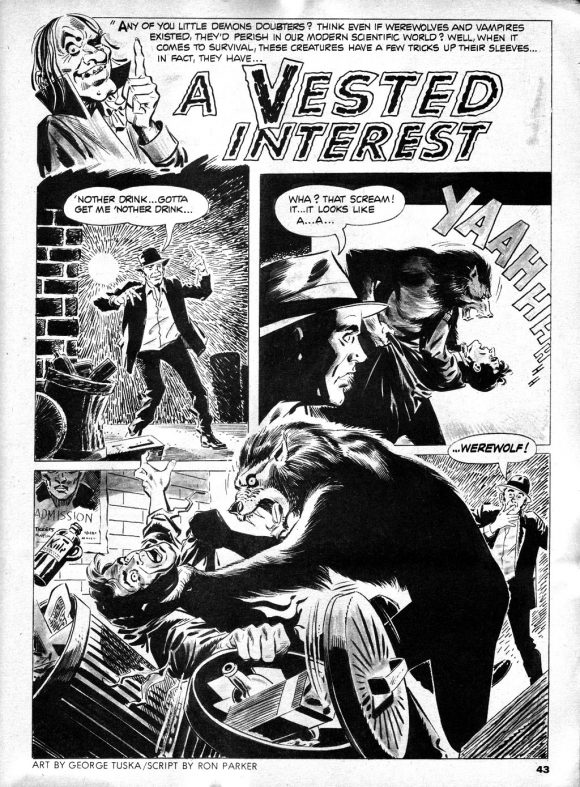 Unlike DC and Marvel’s “horror” comics, the Warren books were magazines and didn’t operate under the restrictions of the Comics Code Authority, which stated: “All scenes of horror, excessive bloodshed, gory or gruesome crimes, depravity, lust, sadism, masochism shall not be permitted. All lurid, unsavory, gruesome illustrations shall be eliminated.”

Artists loved the artistic freedom Warren offered and the chance to show off their work in black and white and gray tones without the distractions of garish newsprint color.

T.H.U.N.D.E.R. Agents #7 (Tower, Aug. 1968). Speaking of Wally Wood, he was hired by Tower Comics in the mid-60s to create a comics line, resulting in T.H.U.N.D.E.R. Agents (The Higher United Nations Defense Enforcement Reserves…and no, I didn’t have to look that up), starring costumed heroes Dynamo, No-Man, Lightning, Menthor, Raven and others). 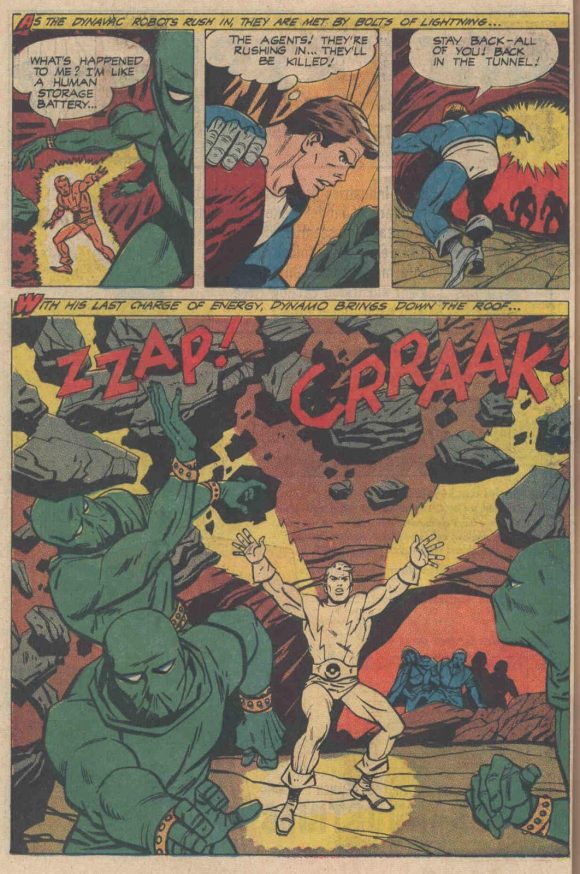 Wally Wood being Wally Wood, he also brought in a bunch of cream-of-the-crop artists to work with him, including Reed Crandall, Gil Kane, Mike Sekowsky, Frank Giacoia, Dan Adkins, and, of course, George Tuska,

Iron Man #5 (Sept. 1968). George was a mainstay of the early Marvel years, with runs on The Avengers, The Incredible Hulk, and, of course, Iron Man. It’s that 10-year, on and off, stint on old Shellhead that made him in my mind the definitive Iron Man artist of the era. His Tony Stark was cool and debonair, his Pepper Potts and the rest of the women in Tony’s life, beautifully elegant, and his superhero action as good as it got. 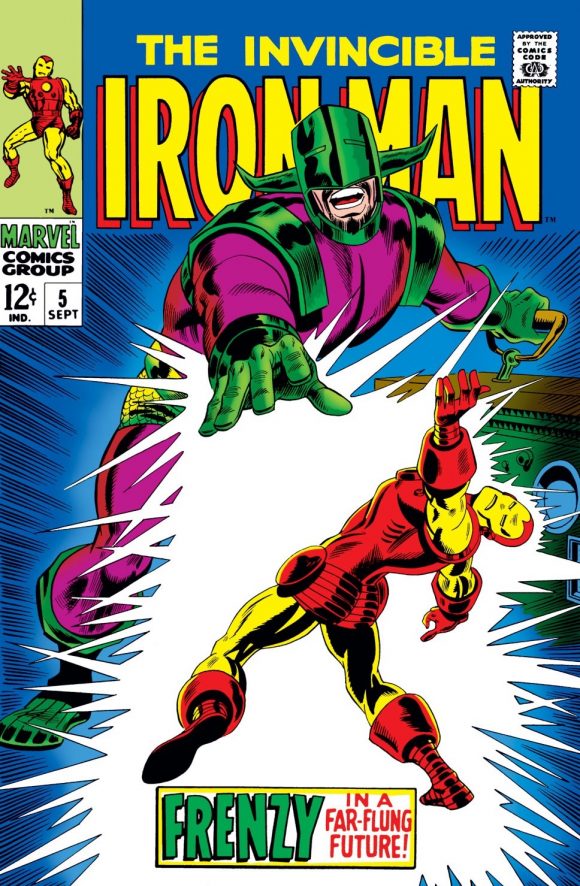 On a side note, just as I first learned to identify Carmine Infantino’s art by the distinctive way he drew hands, Tuska’s hands were one of the keys to spotting his work; Krylla’s extended right hand is a prime example of a “Tuska hand.”

Luke Cage, Hero for Hire #1 (Marvel, June 1972). Another Marvel icon George had a very involved (ahem!) hand in was Luke Cage, Hero for Hire. While he’s not credited with Luke’s creation (Jazzy Johnny Romita and Kibitzing Roy Thomas apparently took care of that), George was the title’s artist for all but one issue of its first year, setting the feel and tone of the character and the strip. 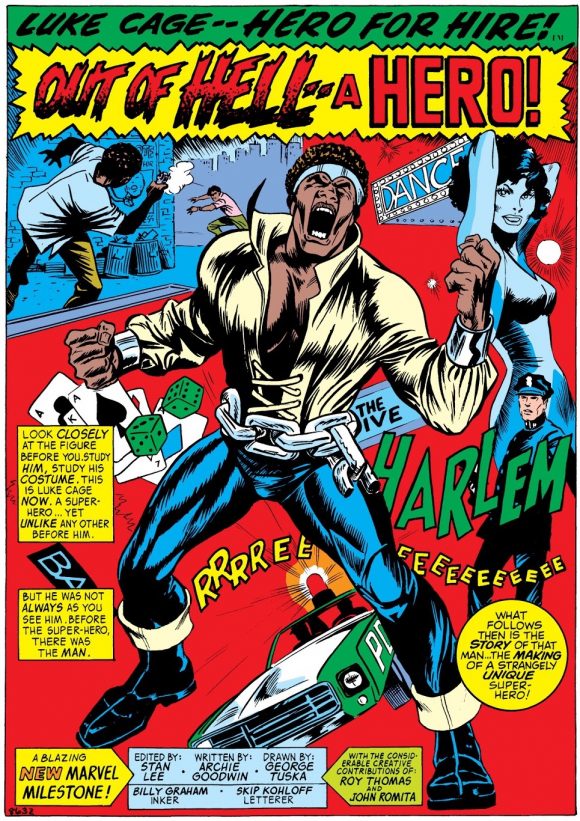 Tuska’s work was not easily subsumed by even the most powerful and overwhelming of inkers. In this job, he was inked by Billy Graham who gave George’s simple line (take another look at the Tuska penciled and inked page from T.H.U.N.D.E.R. Agents above) a heavier, lusher feel, but the body language and energy are unmistakably Tuska.

Planet of the Apes #1 (Marvel, Aug. 1974). Speaking of distinctive inkers, George penciled a six-part adaptation of Planet of the Apes for the black-and-white licensed Marvel magazine that was inked by John Romita. Once again, you can see the Romita in every brushstroke, as well as in Taylor’s face in panel five, but the Tuska comes bursting through in every figure and action. 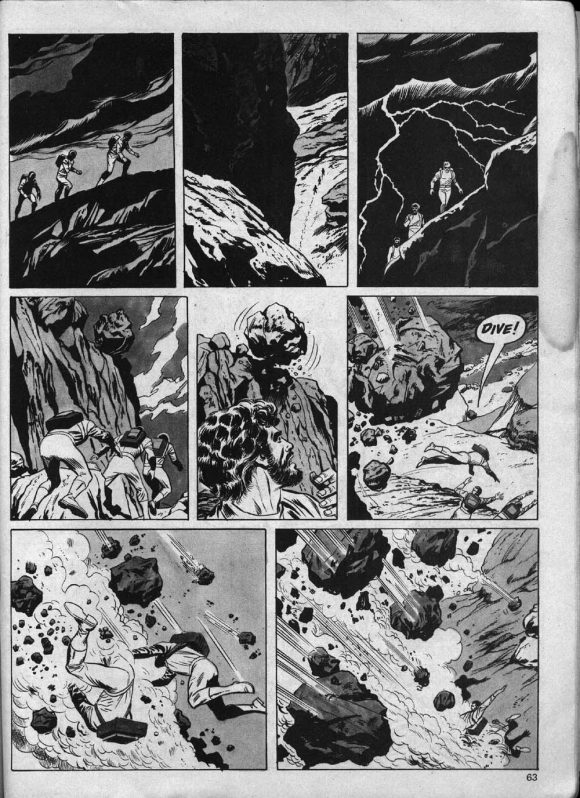 House of Mystery #294 (DC, July 1981). I pitched “Congratulations Mr. Bates… It’s a Warlock!” to House of Mystery editor Karen Berger as “Krammer Vs Kramer with witches.” It was an OK little story, elevated not only by George’s pencils, but the inks by the amazing Tony DeZuniga. As dominating a style as DeZuniga’s was, it once again proves that it was just about impossible for anyone to overpower George’s unique approach. 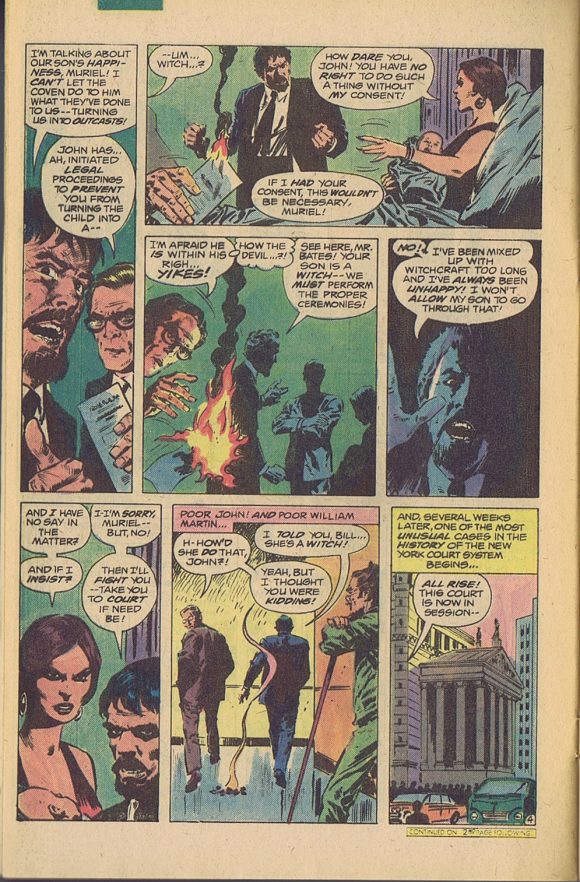 Masters of the Universe #2 (DC, Jan. 1982). I’ll admit it; the He-Man and the Masters of the Universe miniseries started out as just another gig. “You want to write a miniseries based on a new action-figure toy line?” “Action figures… I dunno…” “Oh, yeah, you’ll also be scripting a 16-page insert comic and an issue of DC Comics Presents guest-starring them with Superman.” “Superman! Sign me up!”

Those Superman/MOTU stories would be penciled by the Man of Steel artist Curt Swan, so no complaints. The mini would be penciled by George Tuska, so, yeah, still all good! A lot of the time, I never knew who would be drawing a script when I turned it in, leaving me to be fanboyishly stunned and awed when they would end up on the drawing boards of people like Jack Kirby, Gil Kane, Gray Morrow, George Evans or Don Newton. Knowing George would be penciling helped me envision the scenes I was asking him to draw, but the results were always far better than I had imagined they would be. 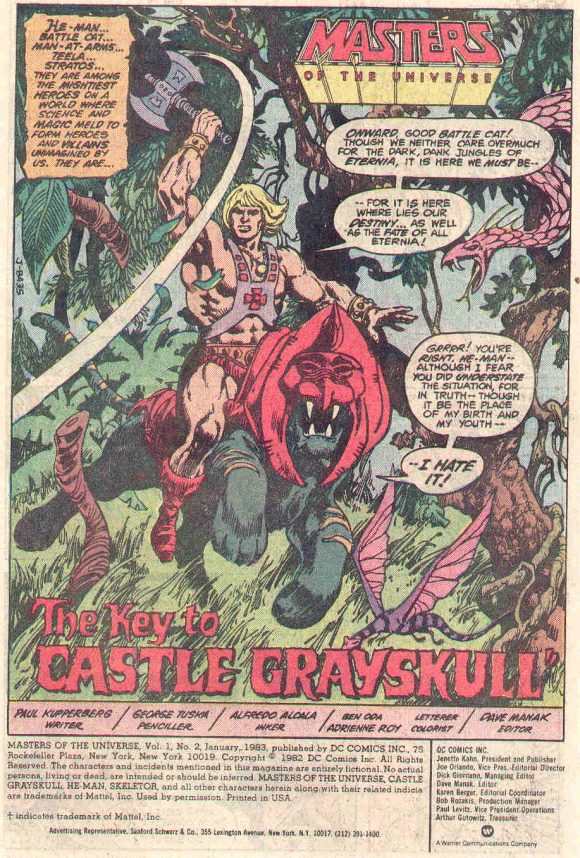 George delivered his usual solid art and storytelling, but the surprise this time came when I got a look at the inked pages, embellished by the lush lines of Alfredo Alcala (on the first two issues; the third was by Rodin Rodriquez). And, once again, George’s work stood up to a potentially overpowering inker with ease. 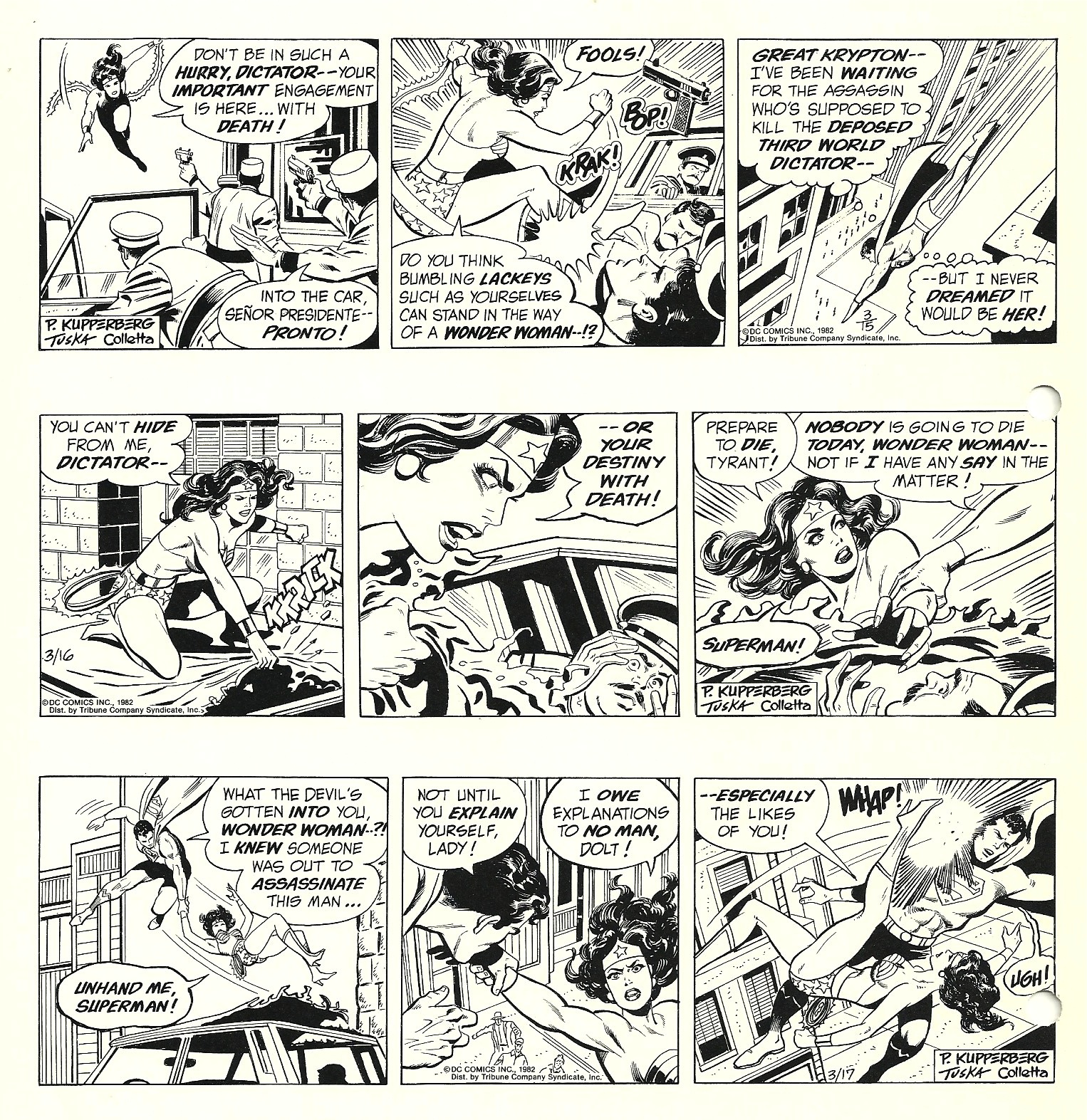 George was no stranger to the newspaper comics format; from 1949 to 1954, he wrote and drew the adventure strip Scorchy Smith, and then, from 1959 to 1967, was the artist on Buck Rogers. The printed size of newspaper strips had been shrinking for years, but George never seemed to have any trouble fitting everything he was being asked to draw into those cramped two or three panels a day—and this being a superhero action strip there weren’t always a lot of “talking heads” panels to give him breathing space! And kudos as well to inker Vinnie Colletta whose clean, well defined line perfectly complemented George’s wonderful work on the strip.