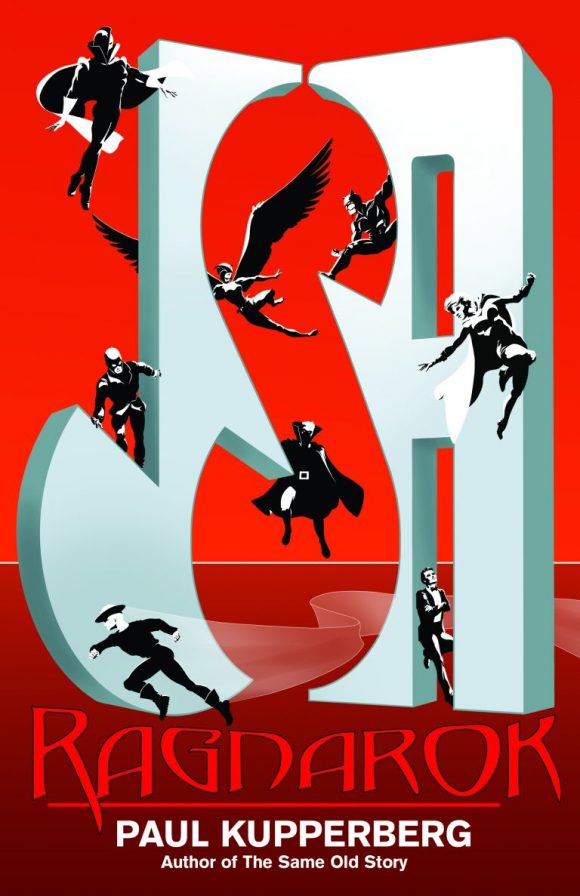 UPDATED 3/7/22: The late Gray Morrow was born 88 years ago! This birthday salute by 13th Dimension columnist Paul Kupperberg first ran in 2021 but it holds up just as well today. Dig it. — Dan

Our pal Paul Kupperberg has another groovy column here for you — a birthday salute to the great Gray Morrow, who was born 88 years ago on March 7, 1934.

You’ll dig it — but don’t forget that our esteemed columnist has a variety of books out there to entertain and enlighten you, as well, such as the novel JSA: Ragnarok. You can click here to check it out.

And away we go… 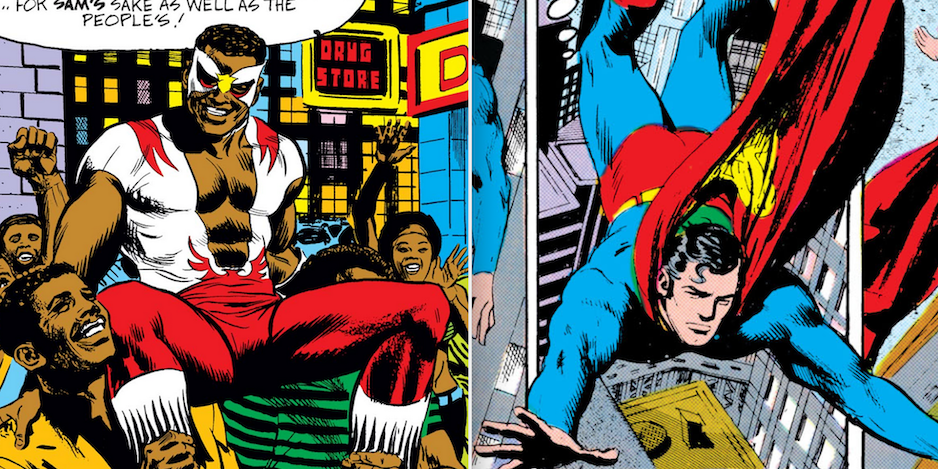 I won’t make the same mistake here: Dwight Graydon “Gray” Morrow (March 7, 1934 – November 6, 2001) isn’t “underrated.” Rather, he’s one of the most respected and admired artists of his time whose work, 20 years after his death, still stands the test of time! 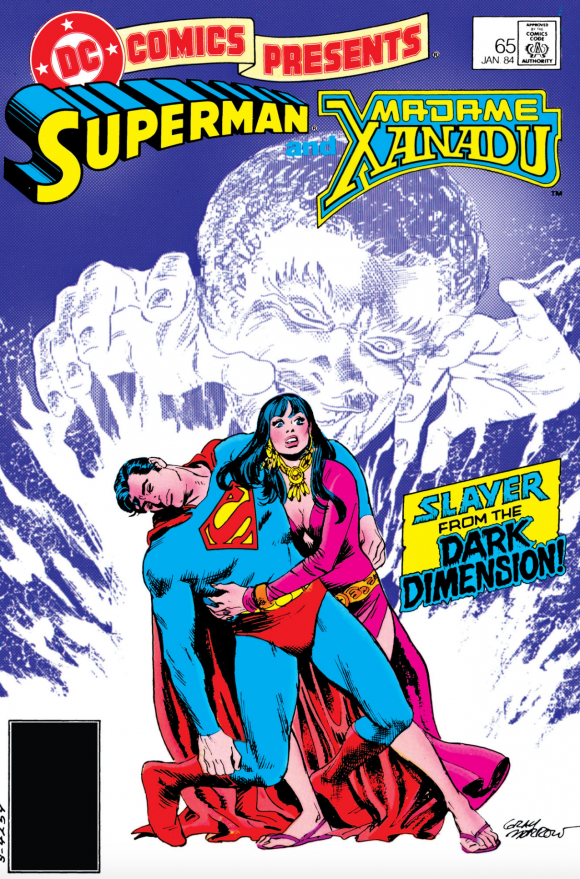 Gray Morrow was hardly a prolific comic book artist; according to Mike’s Amazing World of Comics (“An Unofficial Official Database of 13th Dimension!”®) he drew some 163 stories in his 45-or-so-year career, less than four stories a year, but to paraphrase Spencer Tracy in 1952’s Pat and Mike, “Not many credits, but what there is is cherce.”

Gray was born in Fort Wayne, Indiana, and grew up on the lush newspaper comic strips of the 1930s and 1940s. After going through a variety of jobs in the Midwest, Gray moved to New York in 1955 where he met other young artists like Al Williamson and Wally Wood, and was soon drawing for Marvel Comics (then still Atlas) and others. In addition to comics, he was also a book and magazine illustrator, and even dabbled in animation on the 1967 Spider-Man animated series. 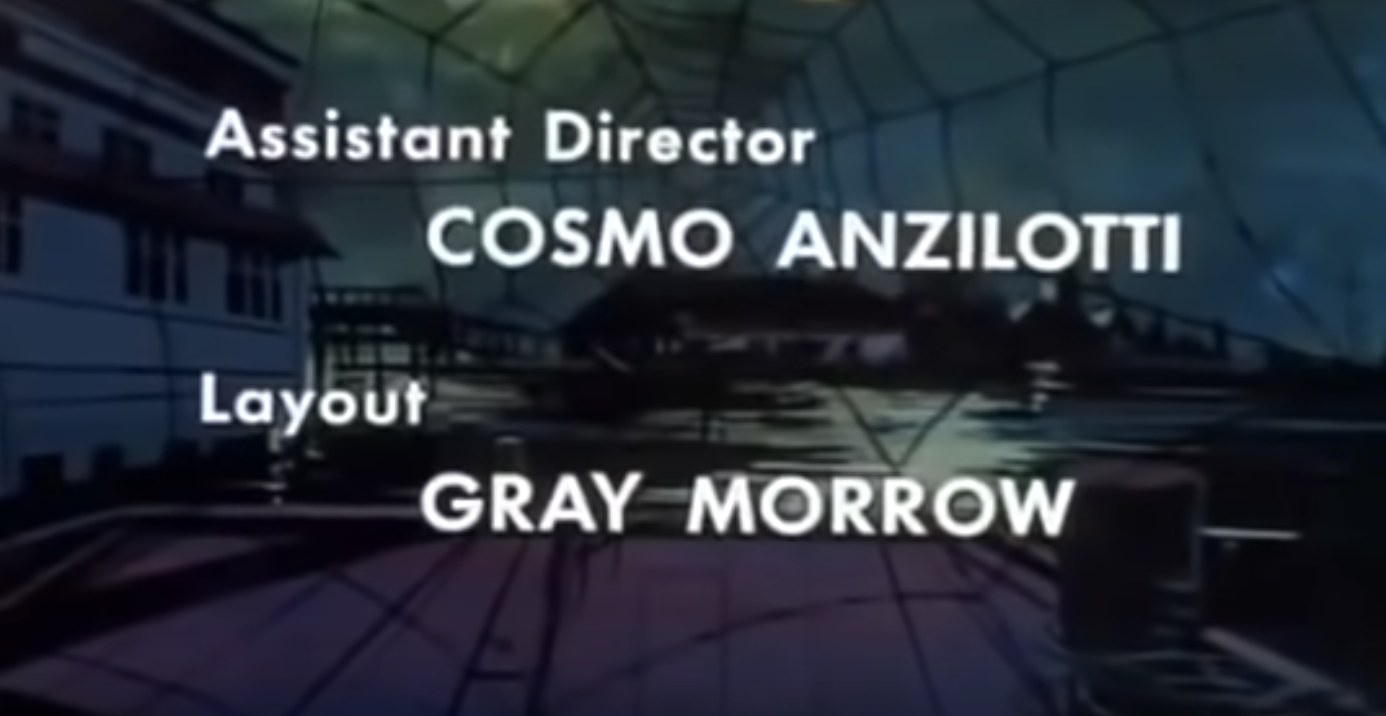 Morrow didn’t draw a lot of superhero stories. He wasn’t a “superhero” artist in the Jack Kirby tradition. Superheroics call for exaggerated anatomy and over dramatized posturing. He was better suited to science fiction and horror, or regular-guy action/adventure heroes. His characters were firmly planted on the ground, even — as in the example from DC Comics Presents below — when they were in flight. He came as close as any comic book artist of his generation to capturing reality on the page.

He was also a suave and debonair gentleman, as conveyed in this portrait of the artist by my late brother Alan, a friend of Gray’s and a sometime collaborator. 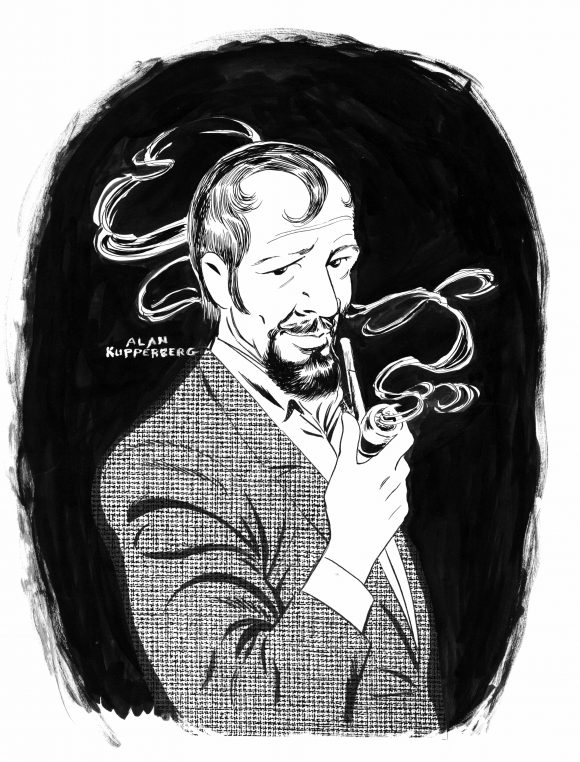 And so, in chronological order, here are MY 13 FAVORITE GRAY MORROW COMIC BOOK STORIES:

Battlefront #41 (Atlas, July 1956). This four-pager from Gray’s early days at Atlas/Marvel offers a glimpse of the artist to come. “The Field of Battle” shows a lot of potential, not to mention his comic strip and EC Comics influences. Unlike a lot of artists at the beginning of their careers, Gray had already learned to draw loose, graceful figures and naturalistic facial expressions. 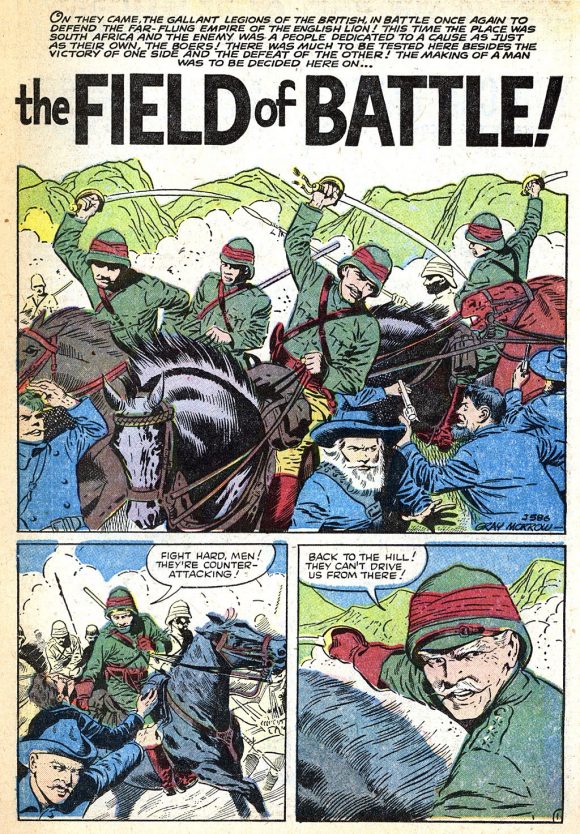 Classics Illustrated #159 (Gilberton, Nov. 1960). Just a few years later, Morrow had already landed on his distinctive style. It’s all there in this Classics Illustrated adaptation of The Octopus, a period novel by Frank Norris, from the delicacy of his inks to the variety of real and interesting faces with which he populated his stories. 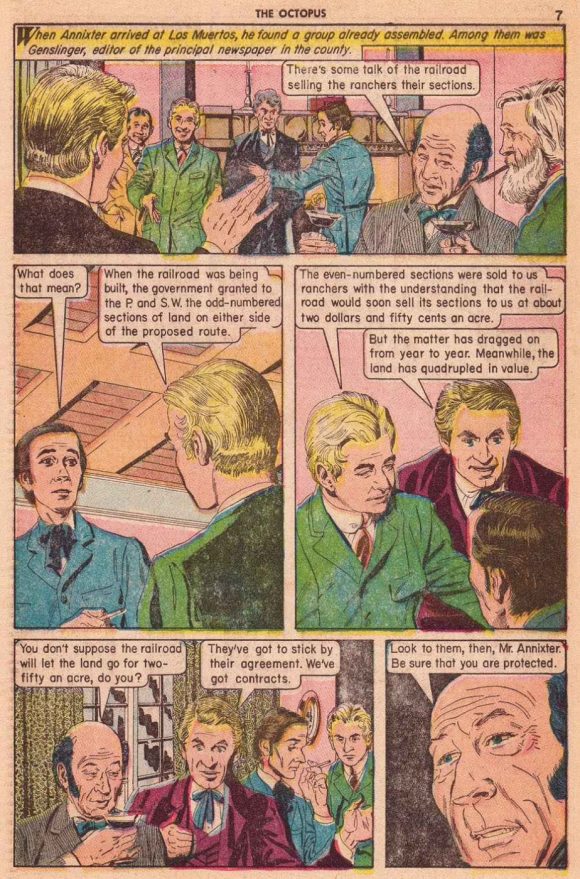 Creepy #2 (Warren, Jan. 1965). Gray Morrow’s art didn’t need color to make it work; in fact, his work benefited from black-and-white reproduction, as in this Otto Binder-scripted story, “Wardrobe of Monsters.” Like so many of his contemporaries, Morrow did some of his best work for the Warren magazines, showing off his mastery of crosshatching and texture. 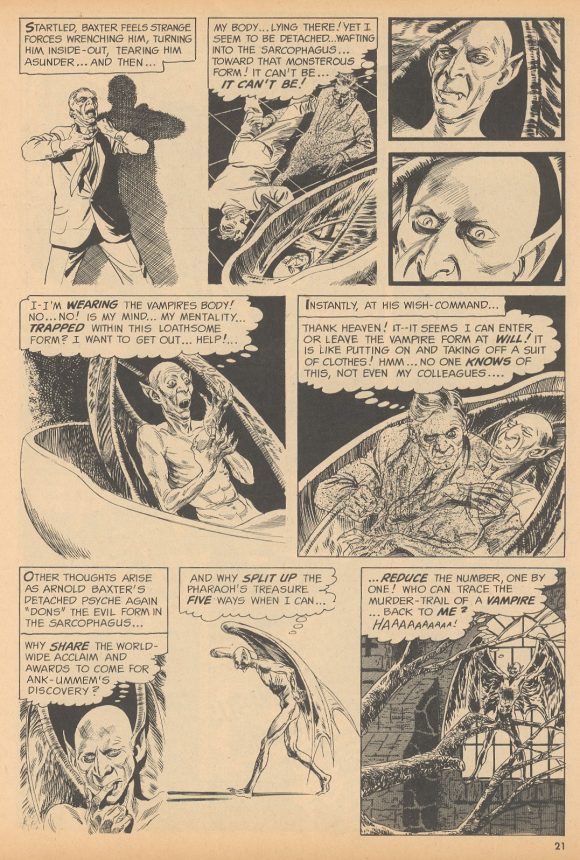 Blazing Combat #3 (Warren, April 1966). Another great Warren job, Archie Goodwin’s “Water Hole.” Again, his use of texture and his understanding of folds and shadows is uncanny, as well as his ability to draw horses. I chose this page in particular based solely on the look of nauseated horror on the face of the soldier in the foreground of Panel 3 as he reacts to the massacre. 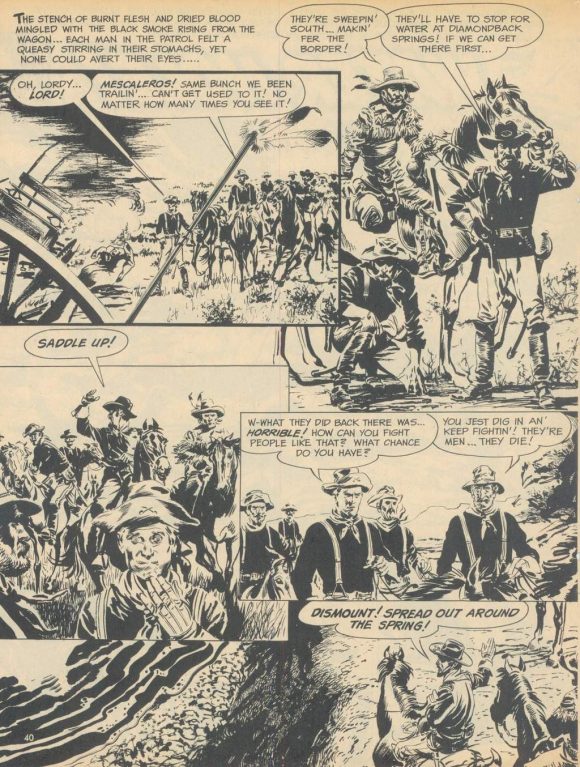 My Love #14 (Marvel, Nov. 1971). Morrow went full-on groovy and far out in Marvel’s My Love #14 with “It Happened at Woodstock,” a story written by Gary Friedrich, where he not only brings his usual solid, grounded art but also manages to nail the likenesses of Janis, Richie, and Country Joe. Gray was also the best colorist of his own work and both the cover and story are tentatively credited to him. Check out how he pops the main figures on the cover and creates a sense of depth in the scene with receding bands of color. Dig it! 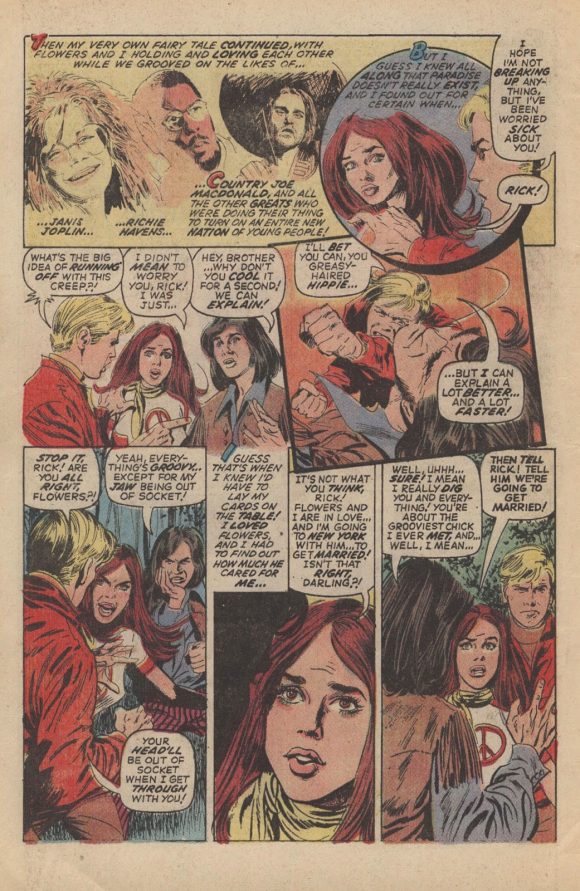 Captain America #144 (Marvel, Dec. 1971). It was another Gary Friedrich script, for “The Falcon Fights Alone,” that led to my favorite costume reveal ever. In the hands of… well, just about any other artist, Sam Wilson would have come leaping out of the other room in typical exaggerated superheroic posturing. But not Morrow. His characters don’t posture. Instead, Sam makes his new costume debut by stepping awkwardly and hesitantly from the bathroom with a very human and understandably embarrassed shrug. 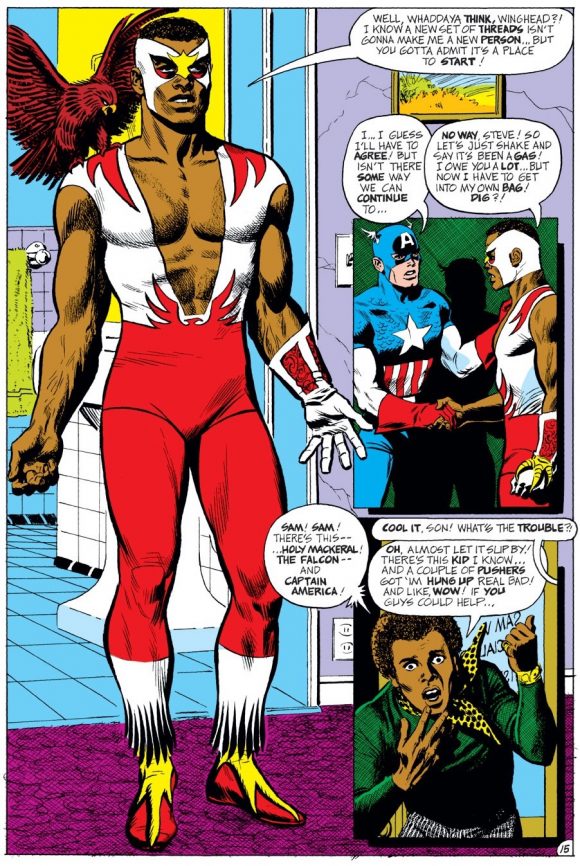 Adventure Comics #413 (DC, Dec. 1971). Morrow entered a brief but productive association with DC Comics at the start of the 1970s, most of the work being done for his old friend Joe Orlando, now an editor for the company. He produced a handful of memorable back-ups starring Zatanna the Magician for Adventure Comics, co-starring her Golden Age hero dad, Zatara, and featuring appearances by the JLA. Once again, his costumed heroes are unlike anyone else’s: They look less like musclebound superheroes than a bunch of guys dressed up for a masquerade party. All-Star Western #10 (DC, Feb./March 1972). Not that he couldn’t bring the dramatic to a reveal when he wanted to, as in this splash from the debut of DC’s El Diablo, “The Devil’s Secret,” written by Robert Kanigher (and edited by Orlando). 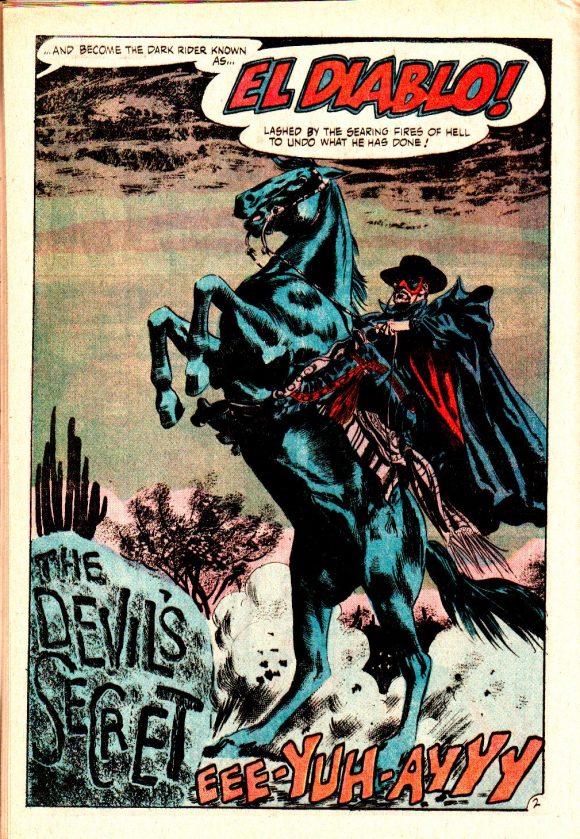 World’s Finest Comics #245 (DC, June/July 1977). Again for editor Orlando, Morrow tackled the original Western version of Vigilante in “The Plague Makers” (and several subsequent stories) by Bill Kunkel. In just those few short back-up stories, Morrow set his rendition of Vigilante in my mind as the definitive version. Black Hood #1 (Archie Comics, June 1983). This Gray Morrow-drawn revival of Archie Comics’ Golden Age hero the Black Hood has become somewhat iconic to fans of the era. Rather than continue the costumed heritage of the character, writer Cary Burkett and Gray anchored “The Mask… and the Man” in the real, gritty world at which the artist excelled. DC Comics Presents #65 (DC, 1984). Editor Julie Schwartz gave me a few “gifts” in our professional relationship, one of the best of which was assigning my Superman and Madame Xanadu team-up story in DC Comics Presents, “Slayer from the Dark Dimension,” to Gray Morrow. If Christopher Reeve made us believe a man could fly on the big screen, it was Gray’s depiction of Superman that made me believe that if a man actually did fly, he would look just like this when he did! The first indication that I’d won the Artist Lottery was when Julie handed me the inked and lettered boards to the finished job and said, “Here’s your Madame Xanadu story. I think it came out OK.” Star Trek Annual #1 (DC, 1990). Space was not a final frontier for Gray Morrow. He had rendered numerous science fiction stories for comics (including Charlton Comics’ licensed Space: 1999 title in the 1970s), not to mention countless illustrations for science fiction magazines. “So Near the Touch,” by George Takei and Peter David proved he hadn’t lost his SF action/adventure chops or his ability to draw the characters’ likenesses. The Big Book of Vice (Paradox Press, March 1999). Some of Gray’s last jobs were short features for the DC Comics imprint Paradox Press’s Big Book series, including “Marlboro World” (written by Steve Vance). Whether due to age or experience, Morrow had distilled his style down to its simplest form, proving that in the hands of a master, less can be more than enough.