DIRECT COMMENTS: The celebrated Mr. K’s column series salutes one of the all-time greats on his birthday…

“This is when I started thinking of myself as a writer. This is why I’ve always tended to think of myself as a writer who draws rather than as an artist who writes. The main problem with trying to be a writer of anything, of course, is that it’s harder to impress people by flashing typed pages in front of them than it is to flash reasonably good art. I tried to be a writer. I wrote about 5,000 totally worthless novels and 3 million even more worthless short stories. Honing my craft, until somebody said, ‘This isn’t working, why don’t you go to art college?’ So, I did. I went to the Alberta College of Art.”

— John Byrne, from Direct Comments: Comic Book Creators in Their Own Words 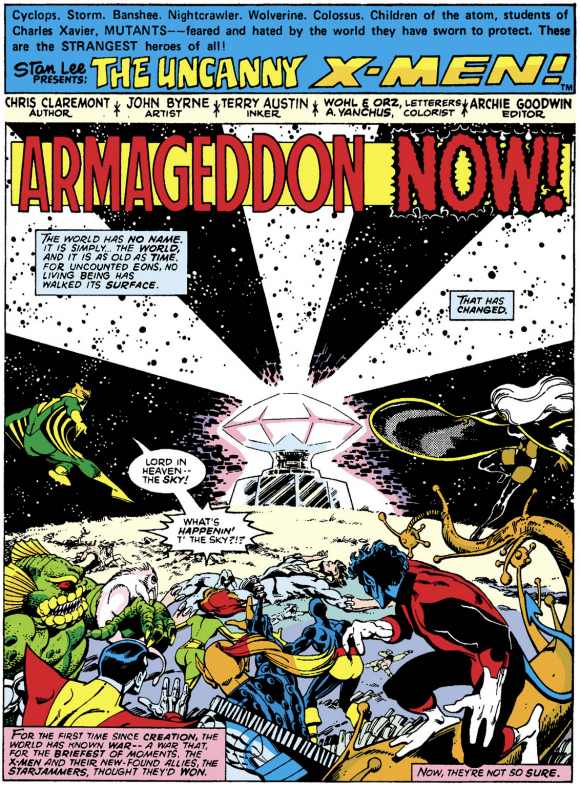 Somewhere along the way, creators who were once considered “popular” got a bump in status to become “superstars.” The sobriquet was awarded these artists for the same reason actors were so dubbed: because they put tuchuses in seats, or in this case, comic books in readers’ hands.

One of the first to attain this status was John Byrne (July 6, 1950), the British-born, Canadian-bred artist and writer who fans first started to notice in 1974 at Charlton Comics, where his work appeared in such titles as E-Man, Emergency, and Doomsday +1. By 1977 he was over at Marvel and pencilling the Champions and, beginning with #108, X-Men.

In Direct Comments: Comic Book Creators in Their Own Words — available in paperback on Amazon — John described his path to the X-Men as taking him from, “Marvel Team-Up, starting with #53 (January 1977), which was the first time I ever drew the X-Men (to) the second (time) in Iron Fist #15 (September 1977). The third place I did the X-Men was in the X-Men! I got the X-Men by threatening everybody up at Marvel with bodily harm if Dave Cockrum ever left and they gave it to anybody else. It seems to have worked. I got the X-Men. A legend was born. At least conceived. Still waiting to be born. The longest gestation period in history.” John was being modest. The Chris Claremont/Byrne X-Men collaboration was a hit, made only bigger by 1980’s nine-part “Dark Phoenix Saga,” the story that about broke fandom. During his run, he created Alpha Flight, Proteus and Kitty Pryde. After X-Men (and while simultaneously working The Avengers with David Michelinie), John went on to a string of successes, from Fantastic Four to Indiana Jones to Incredible Hulk.

Then it was on to DC Comics.

“For years, since the 1978 Superman: The Movie came out, I’d been going around saying those jerks at DC don’t know what to do with Superman,” John said in Direct Currents. “A sequence of events came together all at the same place… (where) I wasn’t able to be under exclusive contract to Marvel anymore, and Dick Giordano called me up and said, ‘OK, you’ve got Superman! Put your money where your mouth is!’ I was on Superman two years. Two years real time, but I was doing three books a month, Superman, Action Comics, and Adventures of Superman. I think Roger Stern toted it up one time. I did 78 Superman or Superman-related stories in those two years. So effectively I did over six years of a regular monthly book in two years.” 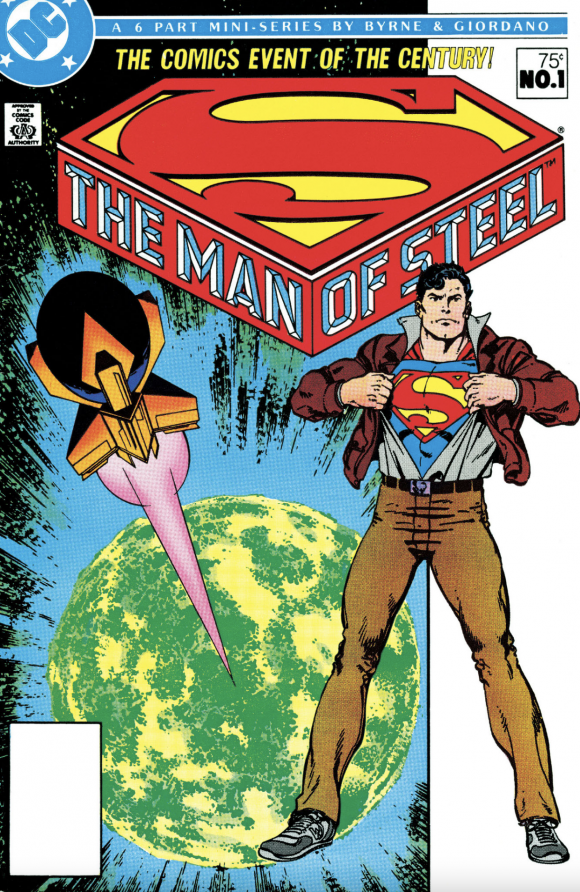 Today is John’s birthday, and I can only pick a mere 13 covers from the portfolio of one of comics’ most prolific and popular creators to celebrate! Here then, MY 13 FAVORITE JOHN BYRNE COVERS, in no particular order:

Space: 1999 #6, Charlton (Sept. 1976). A beauty of a cover, water-colored by John and featuring not only a striking and effective image designed to make readers reach for it on the rack, but also a damned fine likeness of Space: 1999 star Martin Landau. The Gerry and Sylvia Anderson ITV series it was based on (moon gets knocked out of orbit, inhabitants of moon-base hurtled into space) was syndicated in America from 1975-1977. 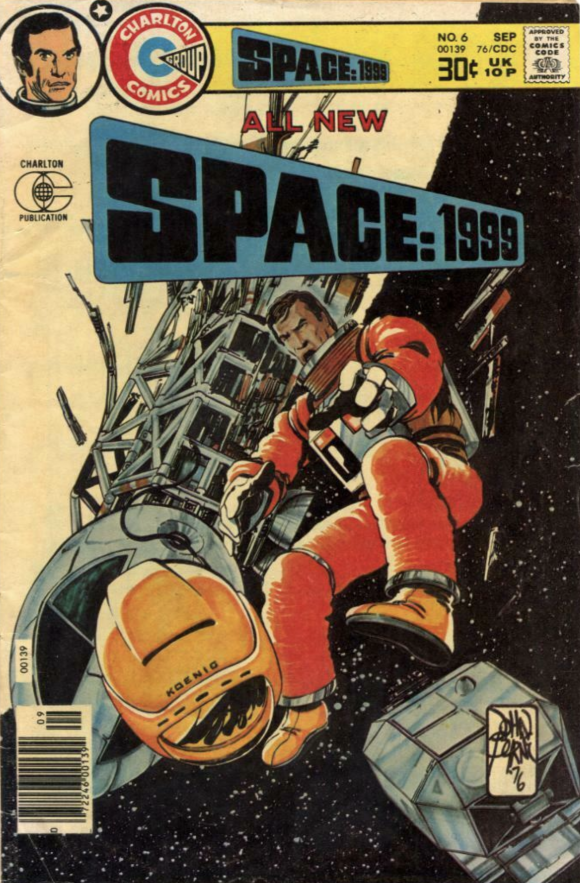 Silver Surfer #1, Marvel (1982). An epic Silver Surfer one-shot by John and Stan Lee in which the suffering Surfer is finally freed from his exile on Earth, deserved an epic cover like this one, inked by Tom Palmer. 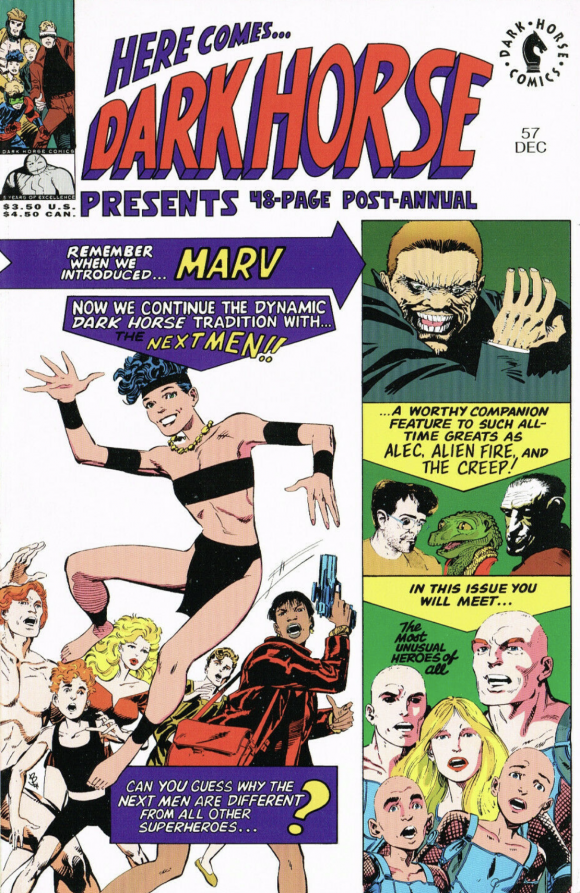 The Fantastic Four #258, Marvel (Sept. 1983). How badass is Doctor Doom? He rips up mint copies of his own appearances! It’s another case of John breaking the fourth world, Doom acknowledging that he knows he’s in a comic book, the whole piece made dark and ominous by the reflected face in the metal of his gauntlet. 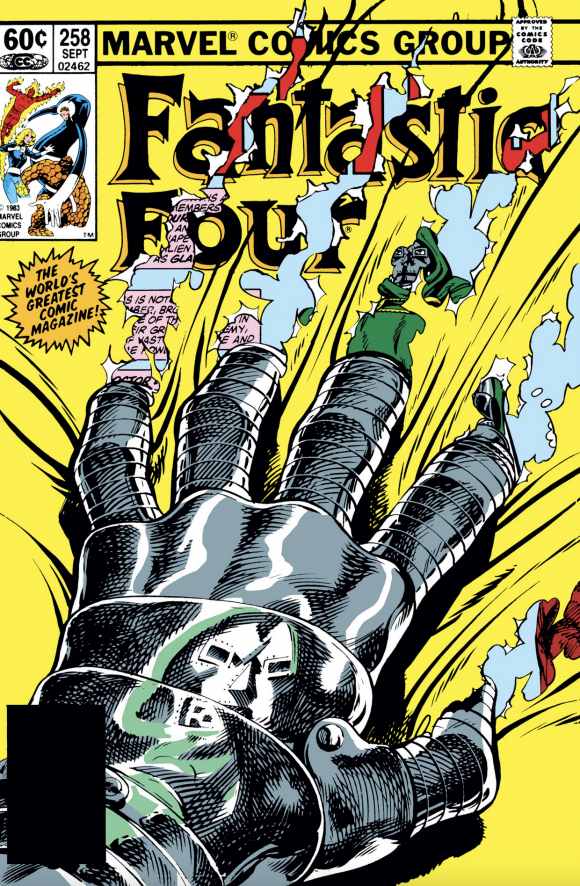 Secret Origins Annual #1, DC (Aug. 1987). How can I not love this one? It graces the 30-page “secret origin” of the new Doom Patrol monthly that was soon to launch that I wrote, and which John penciled and inked. He included a cameo of the creative team in the last panel of the story. I think that means I’m legally a DC character. 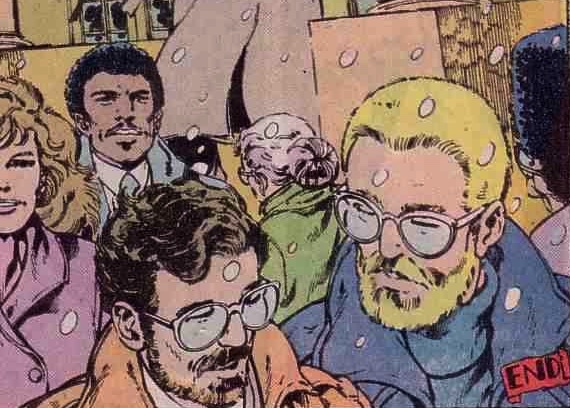 Action Comics #598, DC (March 1988). Another one I couldn’t resist: the story that introduced Checkmate into the DCU (followed by the monthly ongoing series by me and Steve Erwin), which was only proper as John had already lent his design expertise to the characters by coming up with the Knight costume/uniform. 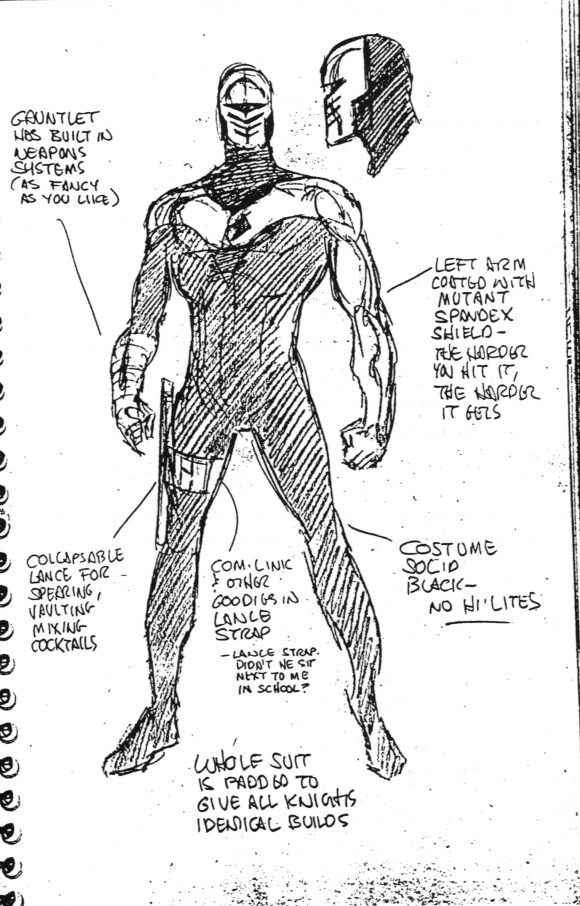 By the way, spot the typo on the cover and win a No-Prize… if you can convince Marvel to send you one for this. 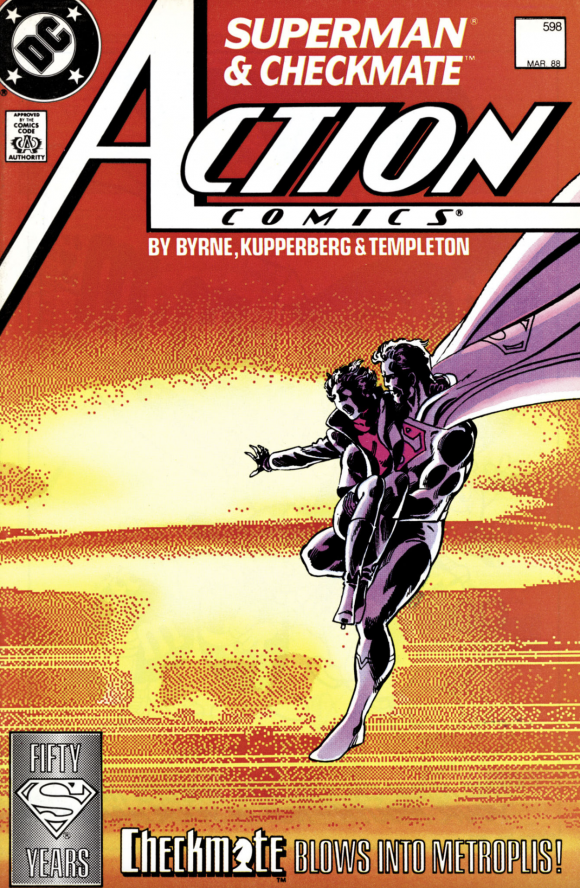 Wonder Woman #113, DC (Sept. 1996). We won’t go into the later fate of young Cassie Sandsmark, but when John created her during his Wonder Woman run to be the new Wonder Girl, he she was an actual kid. It didn’t take long for subsequent creators to add cleavage. 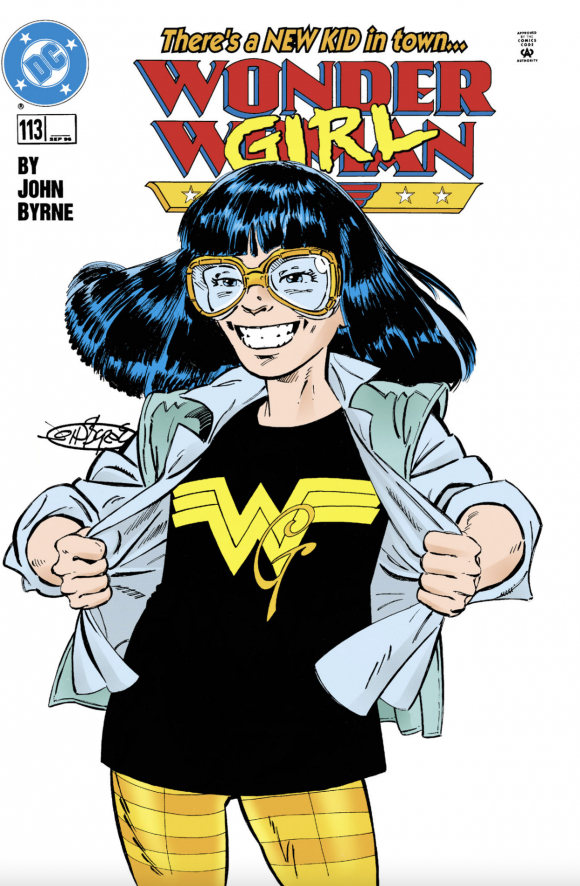 Jack Kirby’s Fourth World #12, DC (Feb. 1998). John did only one cover during his 20-issue run of New Gods that I edited — he was happy to leave that job to Walter Simonson — but he made a Mister Miracle cover that would have made creator Jack Kirby proud. Superman/Batman: Generations 3 #3, DC (Feb. 2004). The third of John’s intergenerational Elseworlds stories was a 12-issue limited series, versus the previous four-issue Prestige Format minis. On those, the four covers formed a quadriptych, but on this one, each cover had to stand on its own. And this one does. John Byrne’s Next Men #9, Dark Horse (Nov. 1992). Great use of negative space and an image that may not be about what you think it is. Stowaway to the Stars, IDW (2016). John got in on the mid-teens coloring book craze with this “graphic album to color,” featuring two dozen illustrations with accompanying narratives. 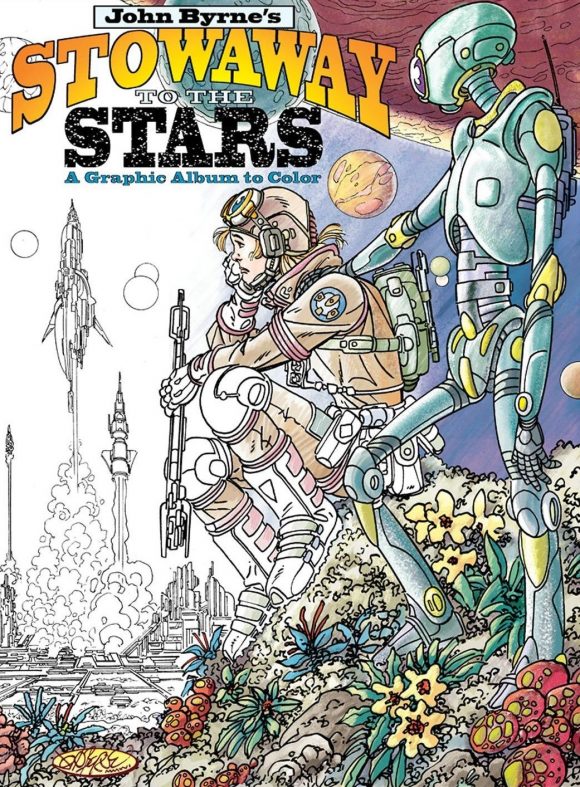 “(Harry) Chesler looked over my work and he said, ‘I’m not publishing anything right now. Why don’t you go to Fiction House?’ I told him I’d already been there, and he asked me who I’d talked to. I told him Jerry Iger. ‘He’s not Fiction House!’ he said. ‘Wait a minute!’ And he picked up the phone and called Jack Fern at Fiction House and gave me such a build-up, I’m sure Fern must have thought he was hiring the new Alex Raymond and Hal Foster rolled into one. Anyway, when I went up there, he gave me the job, and the following Monday, they gave me a strip to work on. Who knows what would have happened if I hadn’t met Harry Chesler? I probably would have gone home and never gotten into comics at all!”

— The Genius of JOHN BYRNE in One SUPERMAN Page. Click here.