The celebrated Mr. K salutes a Super(b) and Marvel(ous) artist… As far as I’m concerned, if all Jim Mooney (August 13, 1919 – March 30, 2008) had ever done was draw the Supergirl back-up strip in Action Comics, that would have been enough to make him one of the favorite artists of my youth. But he didn’t just draw Supergirl (for 10 years, across 120 issues, I might add). He drew thousands and thousands of other beautiful pages since entering the comic business in 1940, working for Fox Publications, the (Will) Eisner & (Jerry) Iger Studio, and Fiction House before hooking up with the proto-Marvel Timely Comics drawing their funny animal characters.

In 1946, sensing the decline of funny animal comics and looking for a change, Jim Mooney dropped in on National Periodical Publications (the proto-DC Comics) and walked out with an assignment to draw Batman, albeit under the “Bob Kane” signature.

Twenty-two years later, after drawing Batman in his own title and World’s Finest, Robin in Star-Spangled Comics, Superboy, Tommy Tomorrow (which was replaced in Action Comics by Supergirl and shifted over to a back-up spot in World’s Finest), the “Dial ‘H’ for Hero” strip in House of Mystery, and others, Mooney left DC and returned to Marvel where his inks graced many a John Romita Spider-Man (and other artists and strips) and penciled such series as Man-Thing, Omega the Unknown, and others. 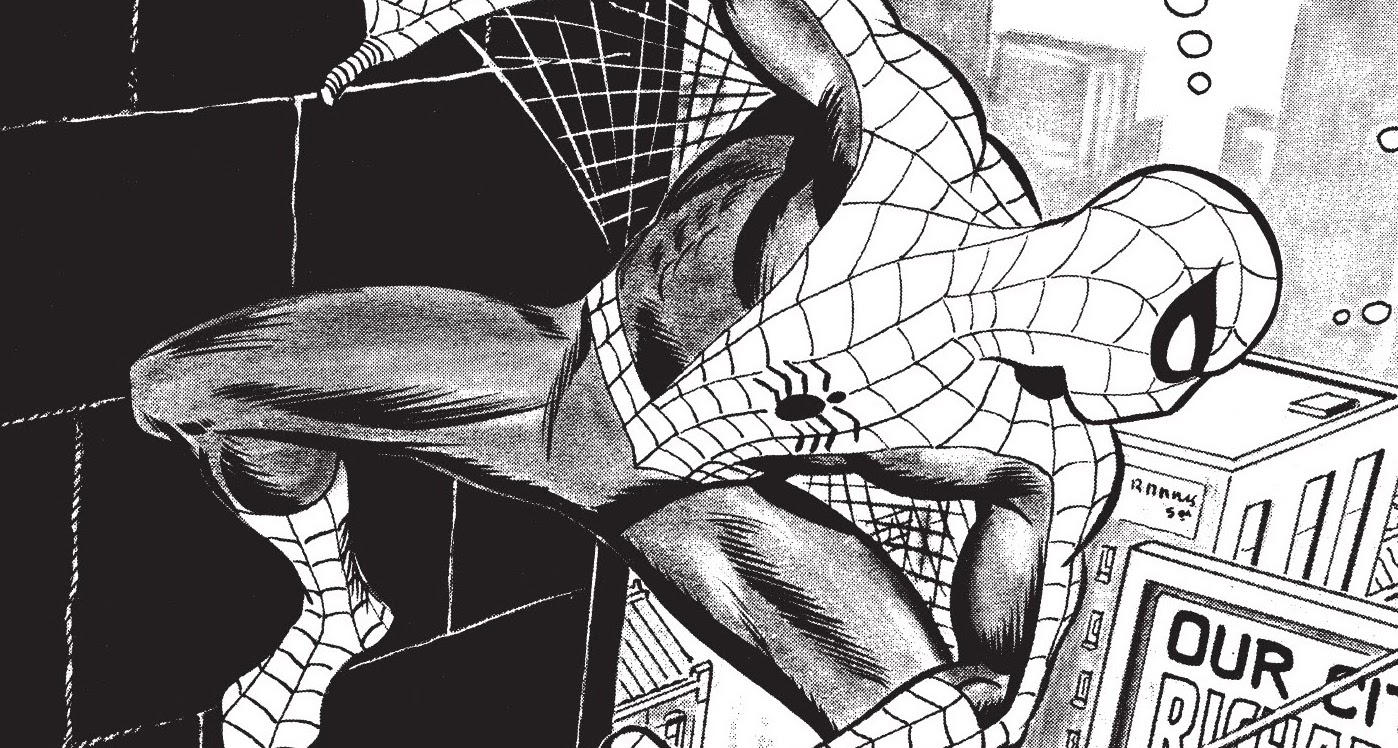 Later still, Mooney entered the world of black-and-white comics, providing many issues of Claypool Comics’ Elvira Mistress of the Dark and as inker on Soulsearcher and Company.

Like I said, Jim Mooney was a favorite artist because of his long association with Supergirl, whose strip was the reason I had begun collecting Action and who, thanks to a kindly gesture by the comics gods, I would later get to write and make a small, pre-Crisis On Infinite Earths impression on.

My admiration for the artist wasn’t limited to his association with the Maid of Might, though. Whatever he drew, Jim Mooney drew it good! He had a solid, clean line and was a great storyteller and he drew pretty girls, which was, in the context of the strip, another good thing. 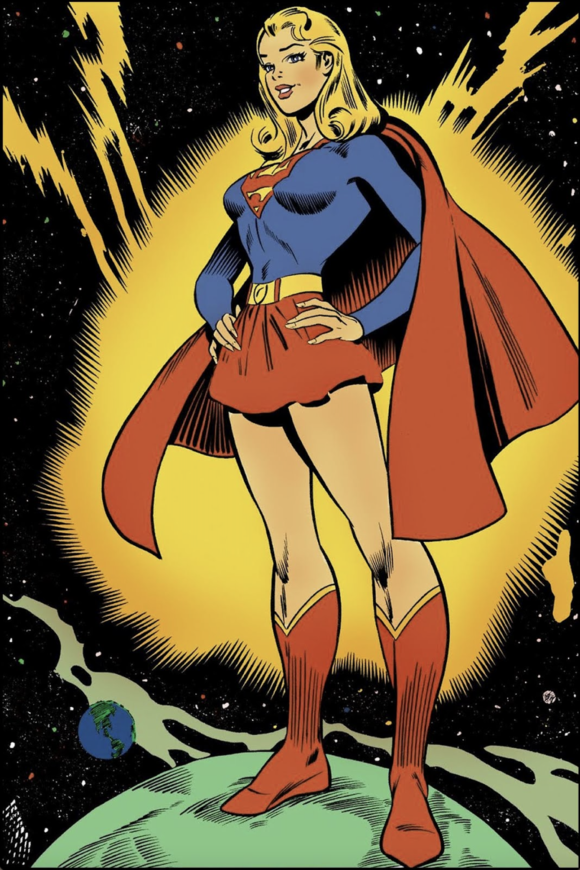 Be that as it may, I had always been disappointed that Mooney worked for Marvel and I for DC and never the twain should meet to work together on a story. I’d been lucky to see my scripts drawn by a great number of my childhood favorites, like Infantino, Swan, Heck, Schaffenberger, Novick, Kane… even Jack Kirby, for crying out loud! But no Jim Mooney.

But the comics gods had another surprise in store for me. In 1990, Jim returned briefly to DC where he penciled the first eight issues of The Adventures of Superboy (the comic based on the 1988–92 syndicated TV series starring first John Haymes Newton, then Gerard Christopher) before being replaced by Curt Swan for the remainder of the run… except for the final issue, a fill-in written by yours truly!

Here then, MY 13 FAVORITE JIM MOONEY PAGES (including some covers):

Batman #38 (Dec. 1946–Jan. 1947). Jim Mooney’s first published Batman story, a fun-filled Professor Nichols time-travel tale scripted by Edmond Hamilton. Considering Mooney had been drawing funny animals almost exclusively for the past couple of years, he acquitted himself well on this one, even catching some of that barrel-chested Dick Sprang action in his rendition of Batman. 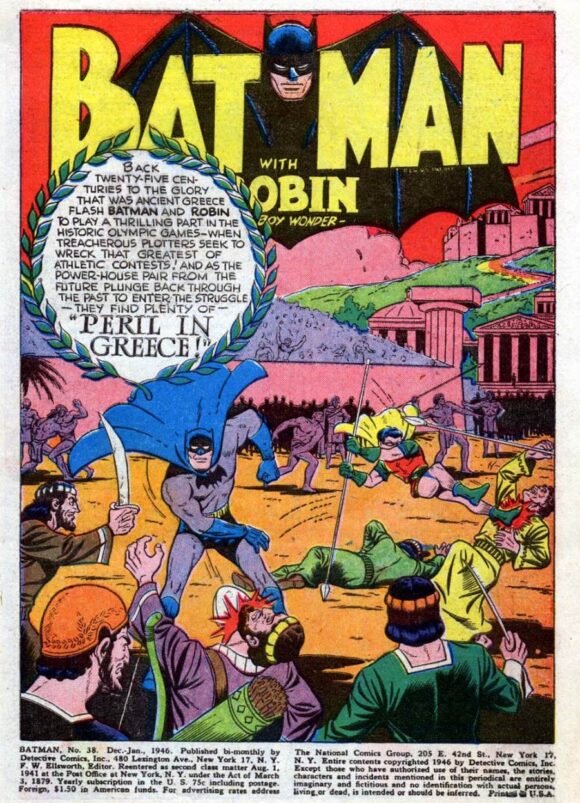 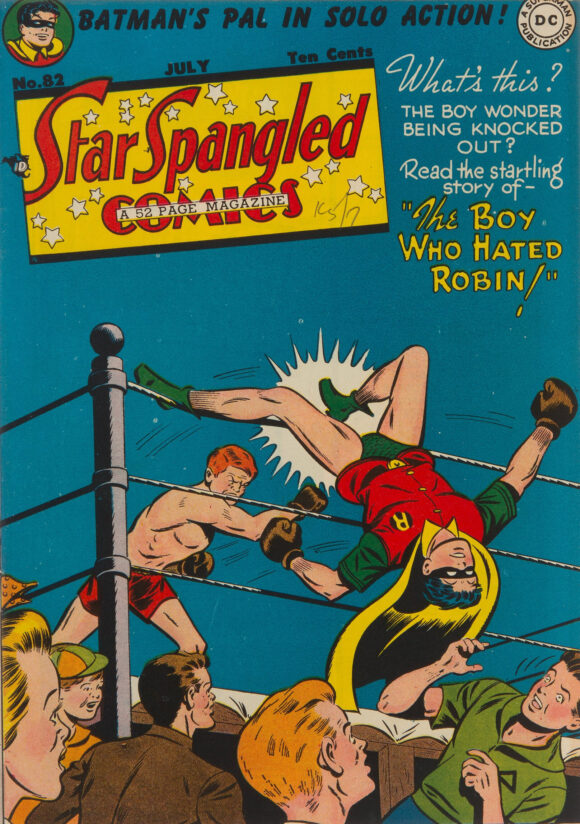 Strange Adventures #7 (April 1951). Mooney could relax more into his own style on his non-Batman work, as in this pulpishly delightful science fiction story by SF great Manly Wade Wellman. Action #247 (December 1958). Some of Mooney’s Tommy Tomorrow work, where he showed off an interesting talent for 1950s alien designs. 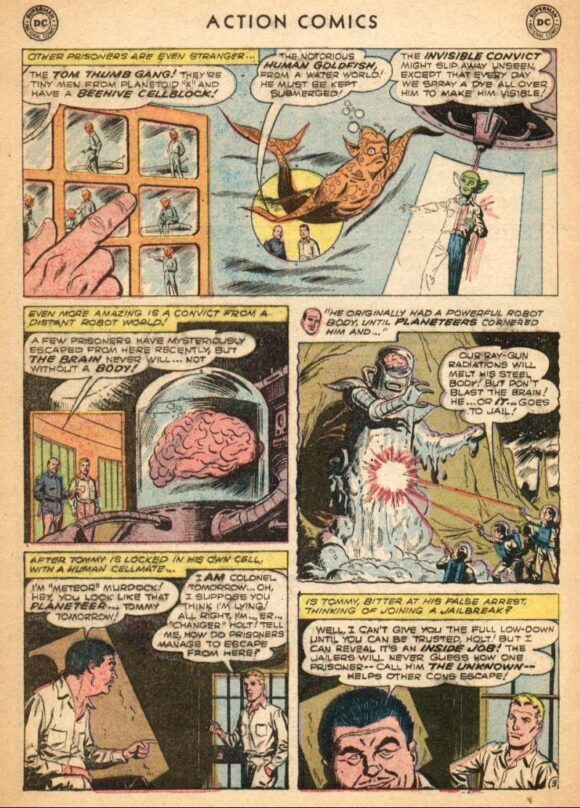 Action Comics #285 (February 1962). Superman, finally able to swallow the jealousy that made him keep Supergirl hidden from the world for three years, announces the existence of “The World’s Greatest Heroine,” in a classic “Book-Length Novel” scripted by Jerry Siegel. OK, maybe my description is revisionist, but even as I kid, I thought Superman was just being a dick! Anyway, great splash page. 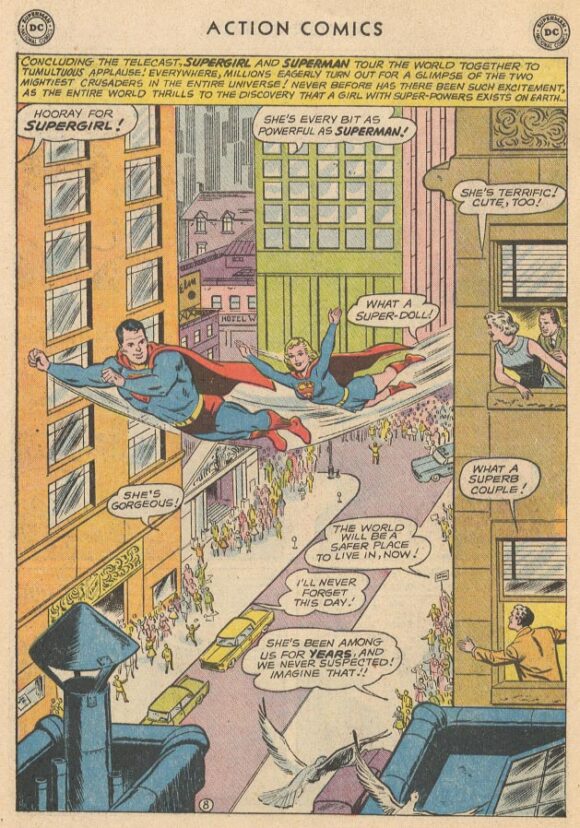 Action Comics #310 (March 1964). Another unforgettable moment in Supergirl’s life: reuniting with her Kryptonian birthparents, Zor-El and Allura, after finding them still alive in the ghostly (how-is-it-any-different-than-the-Phantom) Survival Zone. How will the Danverses deal with this twist? >Choke! Sob!< 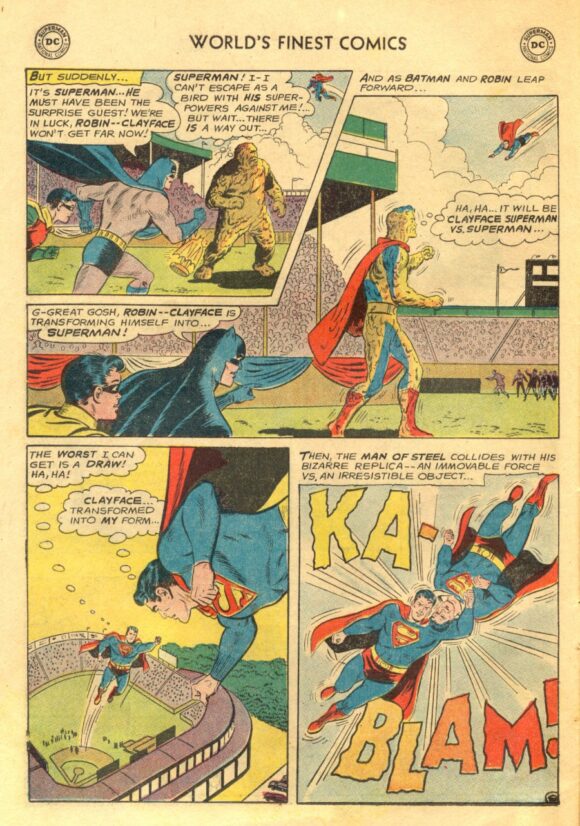 The Spectacular Spider-Man #1 (July 1968). I don’t know who it was at Marvel who said, “Let’s try Mooney over Johnny Romita’s pencils. That might look OK.” But I hope they got a raise. 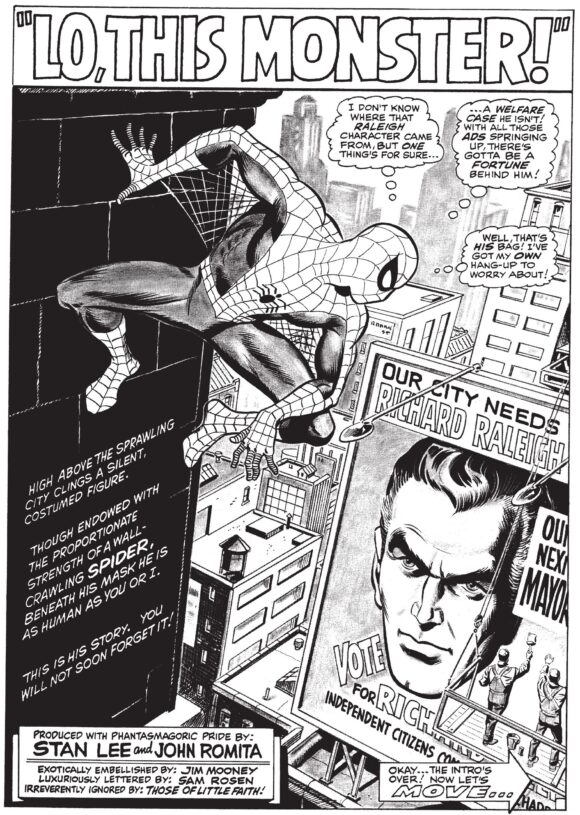 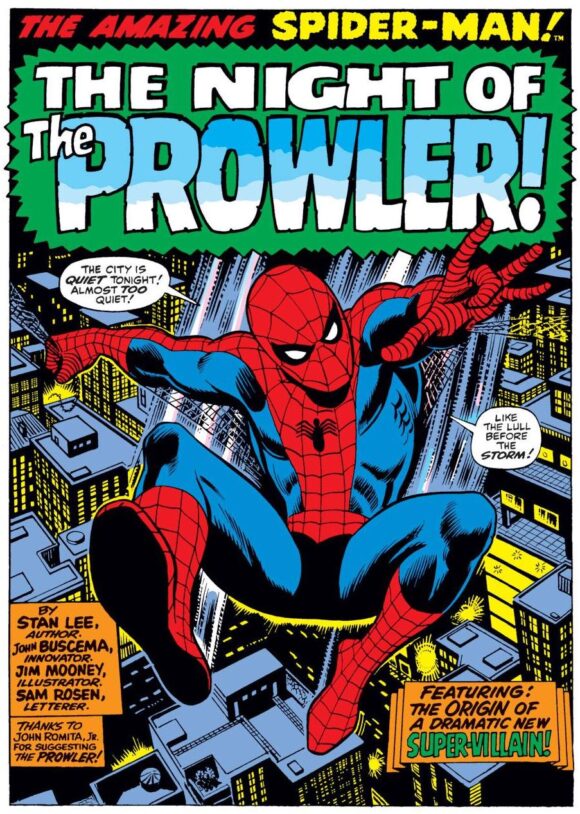 Man-Thing #17 (May 1975). Gray Morrow was Man-Thing’s co-creator of record, but Jim Mooney made the monster his own in his run on the Steve Gerber-written series. 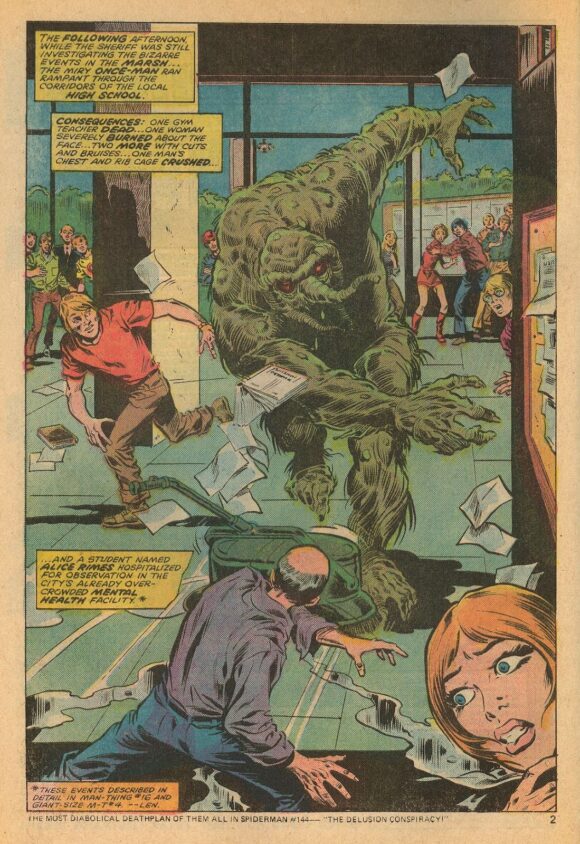 Omega the Unknown #1 (March 1976). Another Gerber and Mooney collaboration (with Mary Skrenes) for Marvel’s short-lived but fondly remembered Omega. It took me a while looking at this page to realize how Jim was able to impart a powerful sense of urgency and speed to the figure without resorting to the visual cue of speed lines. 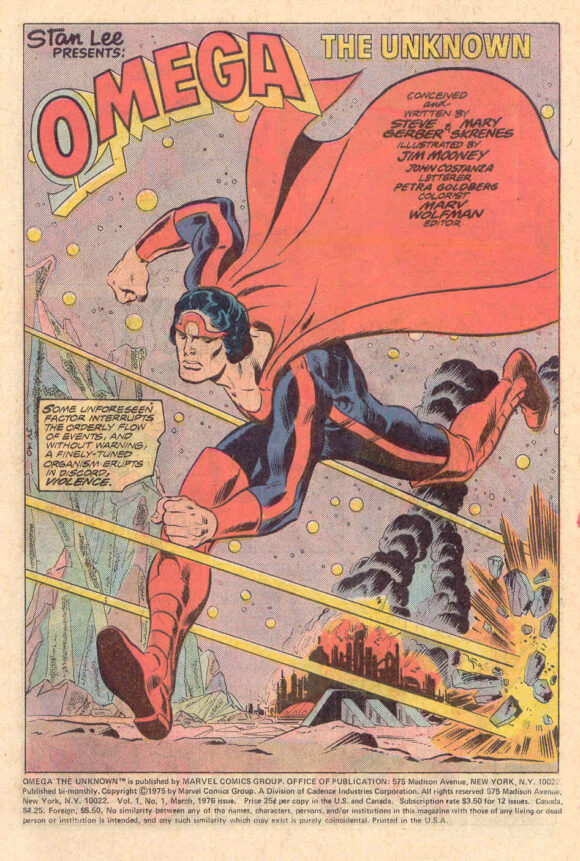 The Adventures of Superboy #18 (July 1991). Like I said, I always dug Mooney’s monsters and aliens, so having him not only draw my script but seeing his rendition of a kaiju straight out of a Japanese monster movie was especially cool. Elvira, Mistress of the Dark (September 1993). Claypool Comics recognized Jim’s value even after DC and Marvel had stopped calling, the fate of too many still talented people whose styles were regarded as outdated and found themselves involuntarily “aged out” of their lifelong careers. And good on them, because Jim Mooney kept delivering until the day he died. 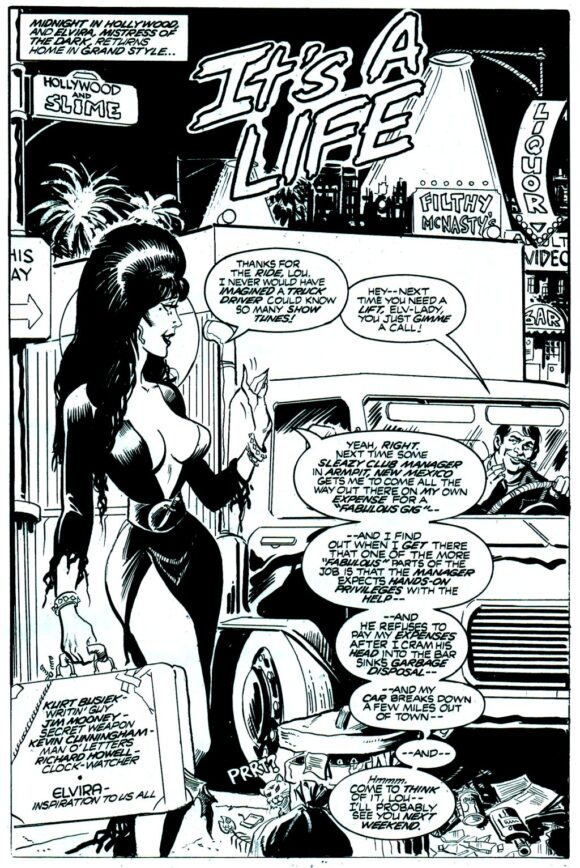