PAUL KUPPERBERG: My 13 Favorite DC and CHARLTON Horror Covers of the 1970s

A heaping helping of horror for Halloween… 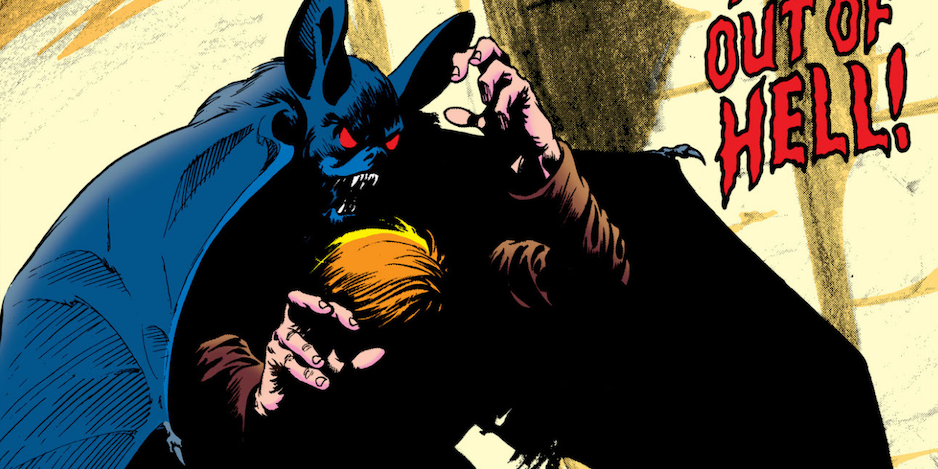 Newly minted regular 13th Dimension columnist Paul Kupperberg is back with a Halloween-flavored piece that celebrates the artistry of the things that go bump in the night.

A Halloween confession is in order here: I’m not a fan of horror, in print or on film. I mean, I’m down for the Universal Horror flicks of the 1930s and 1940s, especially Abbott and Costello Meet Frankenstein, because, y’know, Abbott and Costello. And Freaks, where the horror came from a very real and relatable place, because who hasn’t felt like some sort of freak at some point in their life? And I’ll always stop to watch The Ghost and Mr. Chicken, but is that even really a “horror” movie…?

The “horror” stories I grew up reading in comics were more suspense than actual blood and guts horror. We didn’t even call them “horror” comics; they were the “mystery” books. Until the Comics Code Authority loosened restrictions on depictions of vampires, zombies and werewolves in 1971 (in 1970, the CCA initially rejected a story in House of Secrets #83 because of the inclusion of writer Marv Wolfman’s name), comic book horror was played along the lines of Scooby-Doo, with the supernatural always unmasked to reveal a very natural explanation. 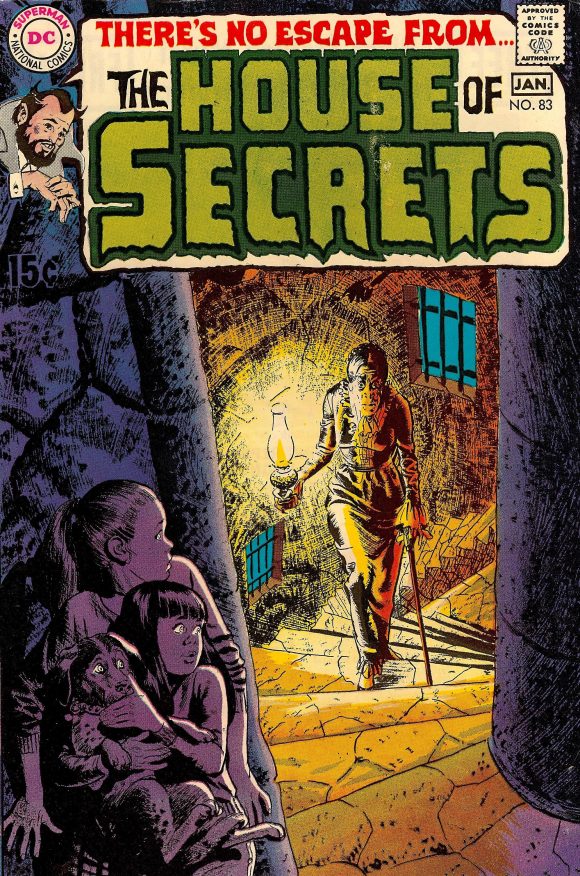 In the late 1960s, DC’s House of Mystery and House of Secrets switched from venues for features like Dial H for Hero and Eclipso, and under editors Joe Orlando and Dick Giordano started featuring stories with a bit more oomph to them. And better covers. Some great covers. Lots of them, in fact.

Meanwhile, up in Derby, Connecticut, Charlton Comics had its own sturdy and steady supply of “mystery” titles. The quality of the stories didn’t change much at Charlton; they were still publishing the work of the same artists for the same low rates, but those artists included Steve Ditko, Tom Sutton, Pay Boyette and Jim Aparo. 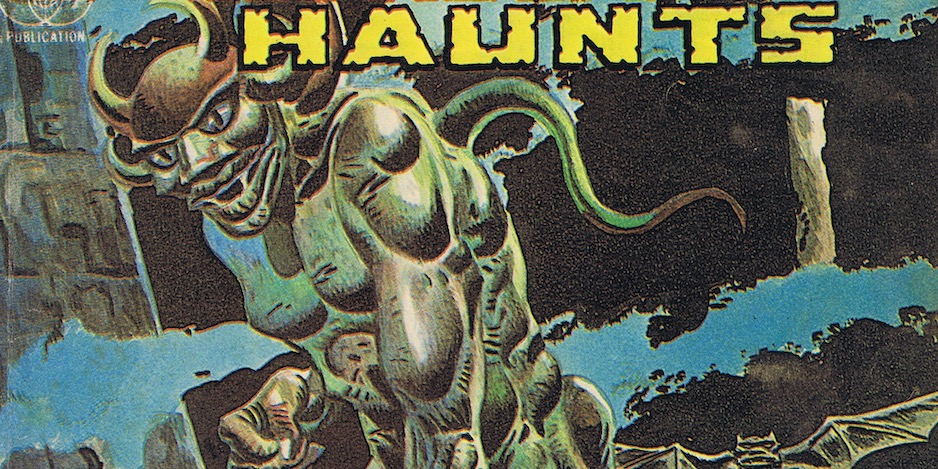 What did improve was the quality of the cover art (though not of the color separations and printing). Gold Key also had a substantial stable of mystery books, but they were a bit too antiseptic for my taste, no matter how well executed the cover paintings by George Wilson and others were.

I know Marvel had its share of horror and monster titles, but none of the covers made a lasting impression on me. I found their approach to even the classic horror tropes — Dracula, the werewolf, Frankenstein — more super-heroic than horrific… or maybe it’s just my old pro-DC bias from fan days.

There were probably dozens of mystery/horror titles with 1000s of issues published in the 1970s, but to make it less scary (Boo!), I’ve limited my choices strictly to newsstand comic-book cover images that stuck with me, even if I had to go searching for the specific title (thanks as always, Comics.org)! 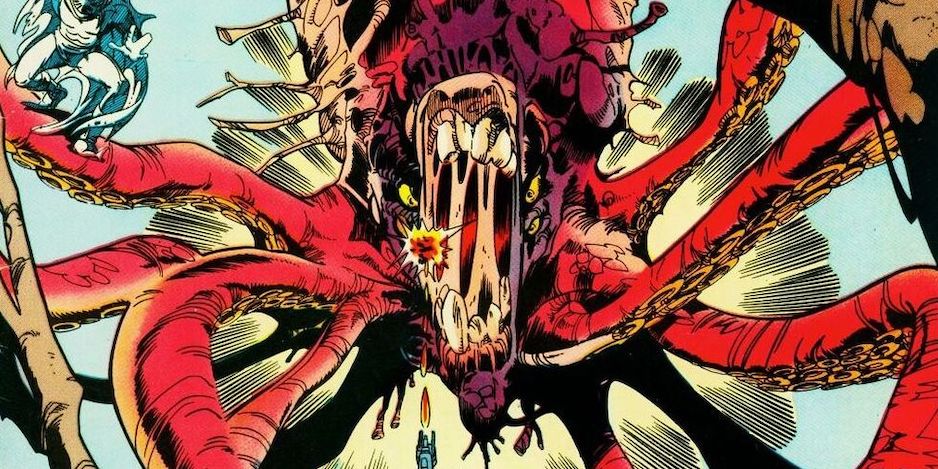 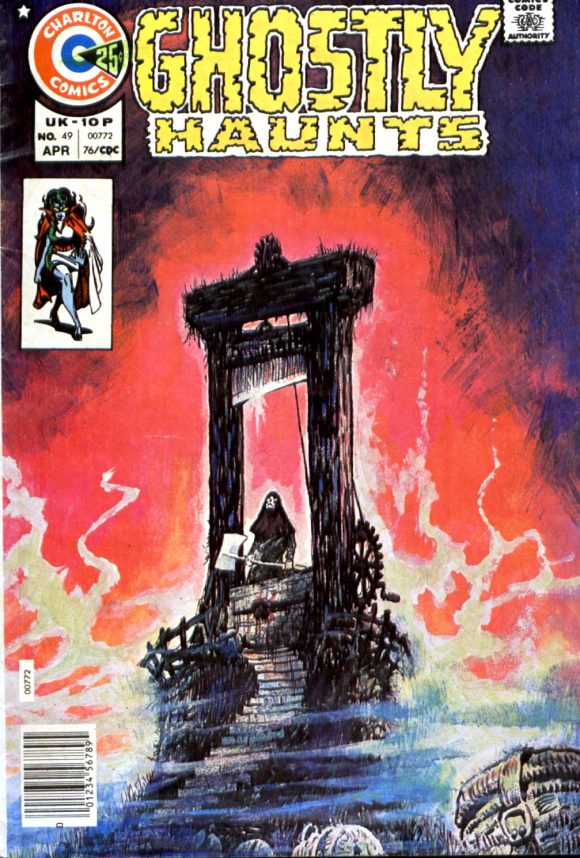 Remember what I said about Charlton’s low page rates? This is what they got for their money, a stunning painted cover by the inimitable Tom Sutton, one of the mainstays of 1970s Charlton. I don’t know offhand if the cover image is tied to any of the stories in the issue (“Doorway to Hell,” “The Price of Eternal Life,” “Death Flew in Darkness”… I could write a story around that cover with any of those titles), but that was the beauty of Charlton: They left these incredible artists alone to do what they wanted, and they could respect the results enough to leave many of these monstrous masterpieces unadorned by distracting cover copy. 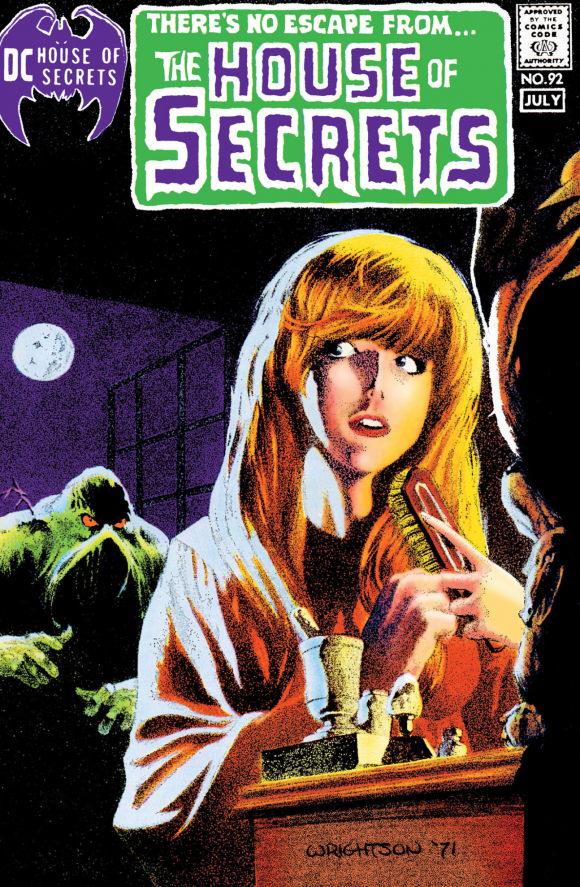 Perhaps not the most frightening cover ever to appear on a horror comic, but certainly one of the most significant: the first appearance of Len Wein and Bernie Wrightson’s Swamp Thing. Originally a one-off eight-page story set in Victorian times, the story was reworked for the later ongoing series, but that first cover by Bernie stands alone as a wonderful piece of gothic horror art, enhanced by the wash colors of the legendary Jack Adler. 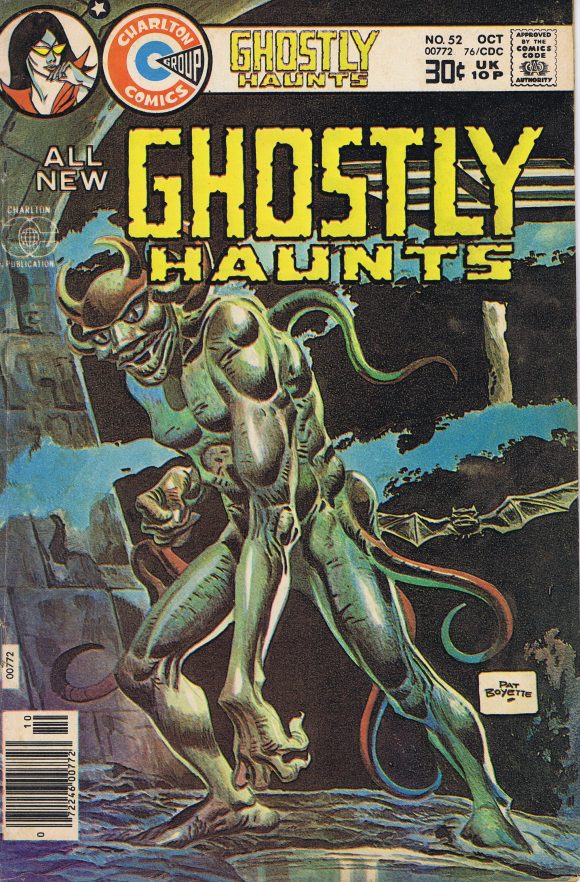 OK, yeah, this Ghostly Haunts cover is based on a story I wrote (“Sleep of Ages”) that was drawn by Steve Ditko, but all that aside, Pat Boyette’s creature shambling through the murky sewers on this painted cover always reminded me of the Creature from the Black Lagoon, a monster whose design I’d always liked even if I thought the movie was all wet. Boyette was another one of those Charlton stalwarts, an artist whose quirky style made him a natural for creatures and monsters of all varieties. 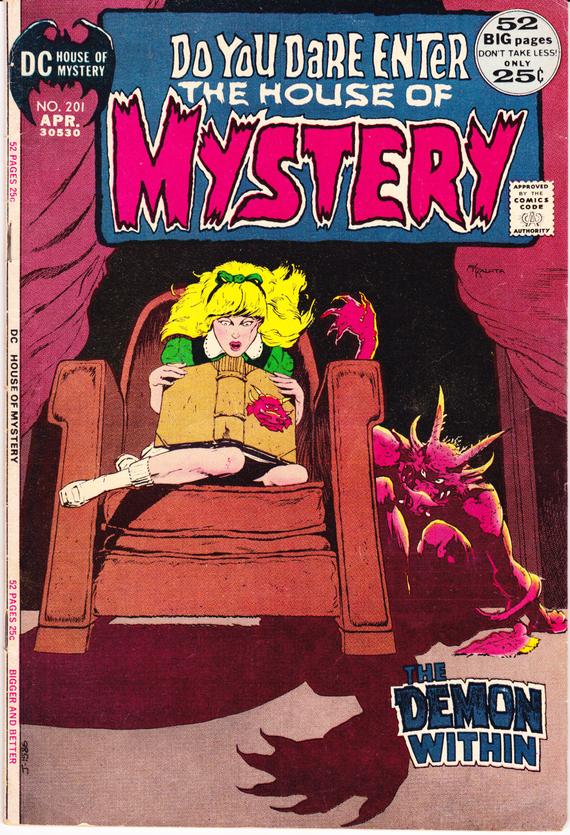 Editor Joe Orlando got it: Kids would be more frightened by (and attracted to) covers showing kids in supernatural peril than by grown-ups in danger. The kid in danger on this Michael W. Kaluta masterwork of horror (colored by Adler) is a character in another fondly remembered 1970s one-off horror story about a young boy who’s “cured” by his parents of being able to turn into a monster by having him lobotomized. “The Demon Within” was written by Joe Orlando and John Albano, with art by Jim Aparo, and won the 1972 fan-based Shazam Award for best individual short story. 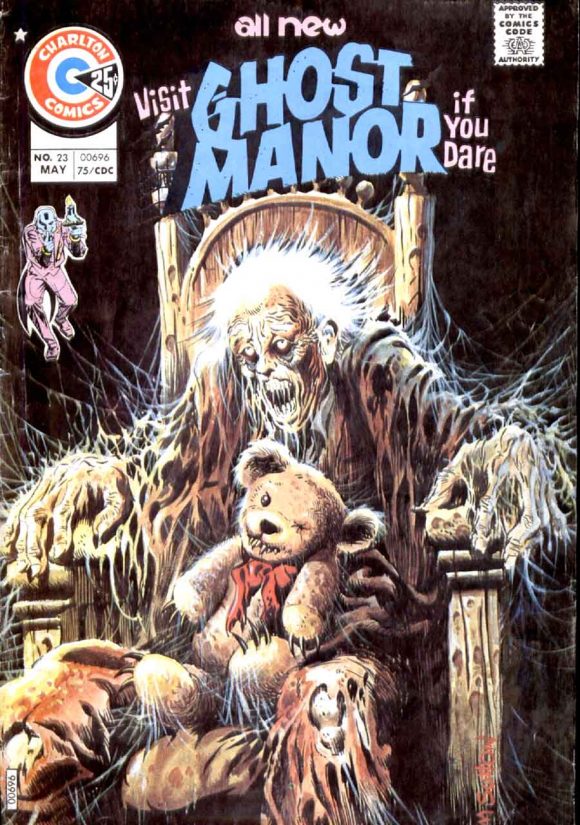 Another painted beauty by Tom Sutton, this one based on his six-page story, “Terrible Teddy,” about a bank robber who runs over a kid whose teddy bear comes after him for revenge. Like all the best of Charlton’s little group of top artists, Sutton’s style was unique, a few steps off from the rest of mainstream comics. Even next to his very individualistic Charlton cohorts like Boyette and Ditko, Sutton’s work was splattered and chaotic, unlike anything being done by anyone else. 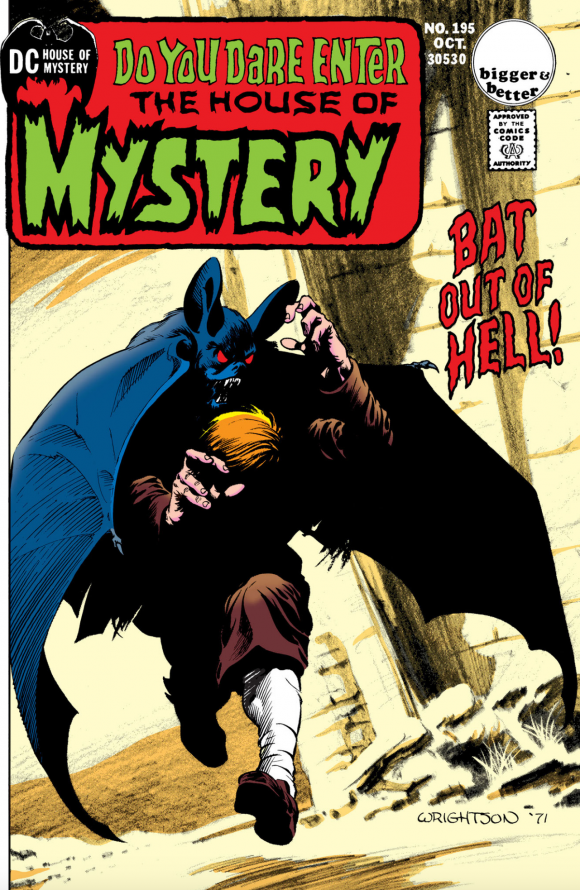 Bats. Eww! Another one by Bernie Wrightson (and colored by Adler), this time taking that universal fear of bats getting tangled in our hair and making it even more frightening and revolting. This was one of those frequent cases in DC’s anthology titles where the reader just knew that the actual story, a twist on “The Tell-Tale Heart,” by Jack Oleck and Nestor Redondo, could never be anywhere near as good as the cover it represents. 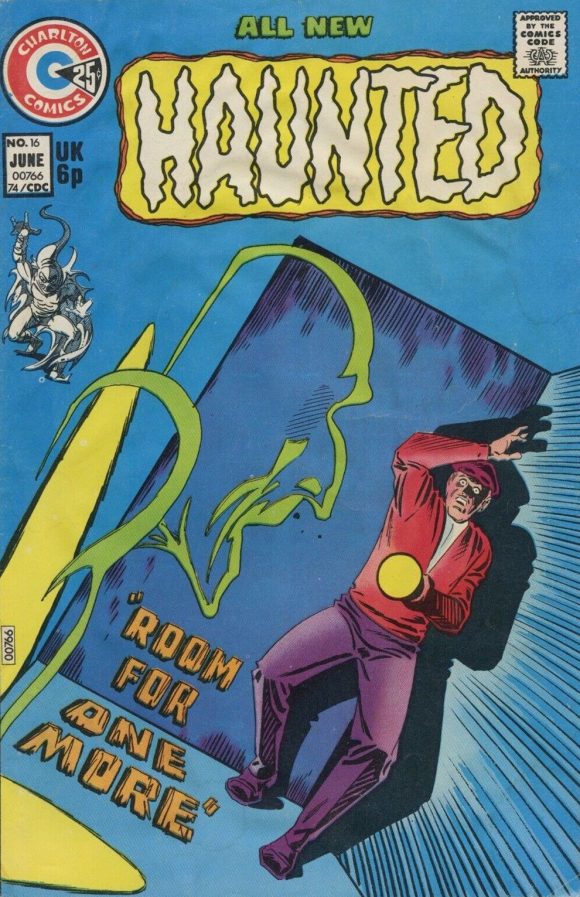 Steve Ditko knew how to bring it on…  and when to lay off. Here’s a wonderfully spooky piece of line art that works because of its stark simplicity. A man literally trapped in a corner and the amorphous spirit that’s driven him there. This one is practically a story in itself, but you can read the existing tale, “Room for One More” provisionally credited to writer Joe Gill with art by Ditko. I say “provisionally credited” because Ditko also wrote a lot of his own stories and he would, along with many of the other artists who worked from writer Joe Gill’s scripts, deviate or disregard the typed text and go off on his own. 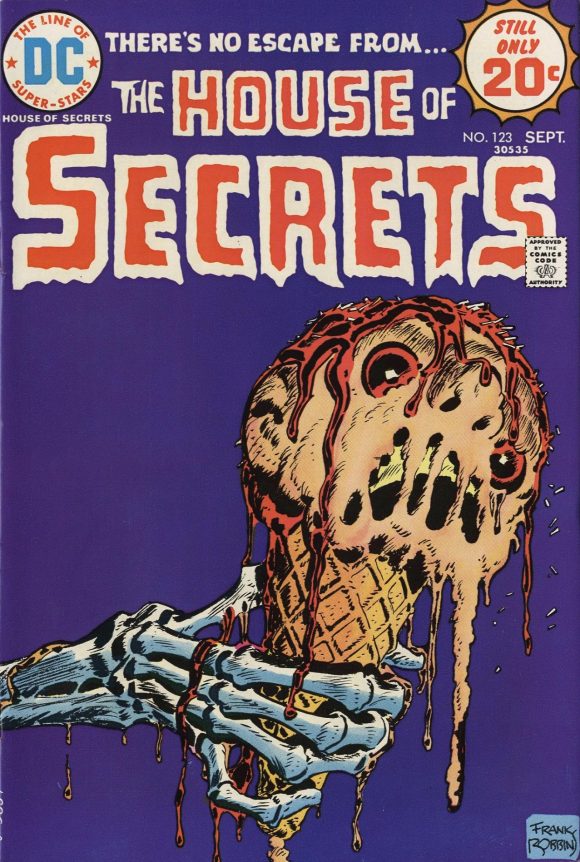 On the other hand, sometimes the story did turn out to be at least as insane as the cover, as was the case with this unexpectedly bone-chilling image by Frank Robbins. “A Connecticut Ice Cream Man in King Author’s Court” was one by writer Michael Fleisher, who could always be counted on for a… unique take on any story (remember his run on the Spectre in Adventure Comics in 1975? No? See cover #13 below) and illustrated by the immortal Alex Toth! 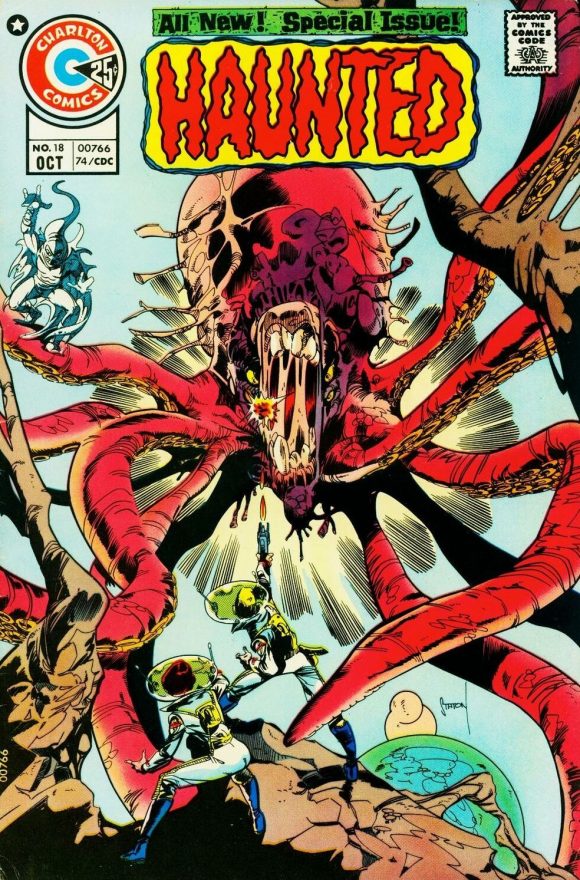 Still fairly new to the comics game in 1974, Joe Staton was showing readers he had what it took for the Big Show with work like this, a moment of science fiction grotesquery and action. There’s something almost Frazetta-esque about the style and composition of this piece that attracted my attention on the spinner rack in the cigar store on Ralph Avenue in Brooklyn and got me to lay down my 25 cents. 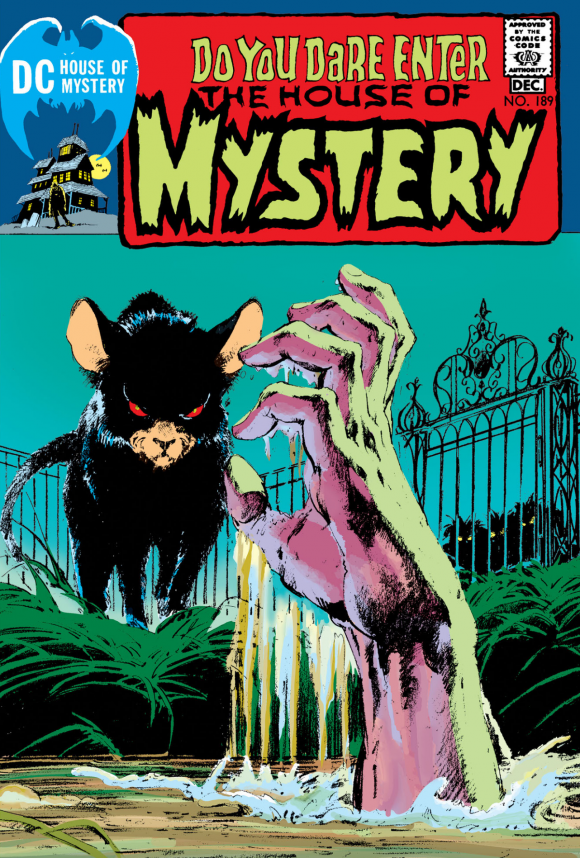 There’s something deceptively simple about this meticulously rendered Neal Adams cover (colored by Adler), for the story “Eyes of the Cat” by writer Robert Kanigher and artists Jerry Grandenetti and Wally Wood. I think it’s the thoroughly pissed off, evil glare of the cat and those almost unnoticed beasts at the gate. 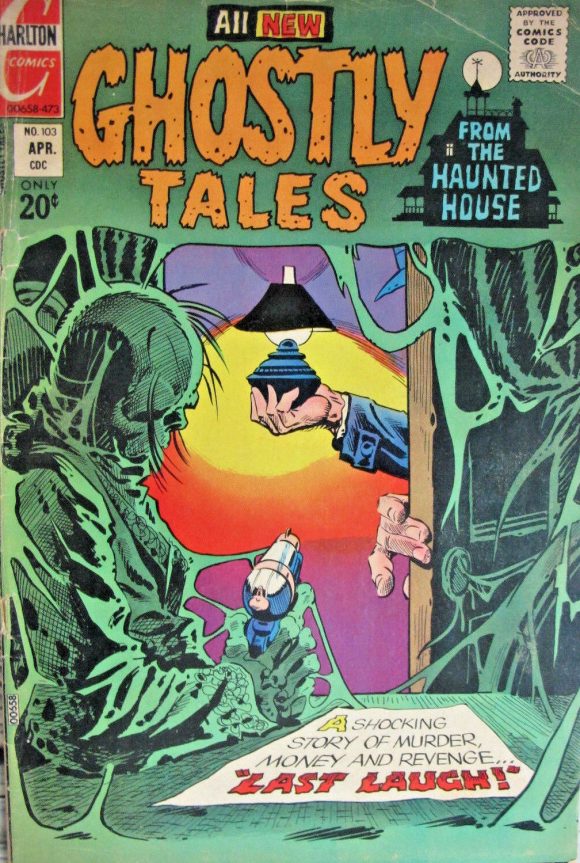 The real “Last Laugh” was on anyone who missed this hauntingly beautiful Steve Ditko cover. Ditko was very fond of green (apparently, he supplied his own color notes to Charlton’s uncredited colorists; it’s been documented!) and this one makes great use of it in a color knockout to frame the essential elements of the scene without losing sight of the desiccated but well-armed corpse. 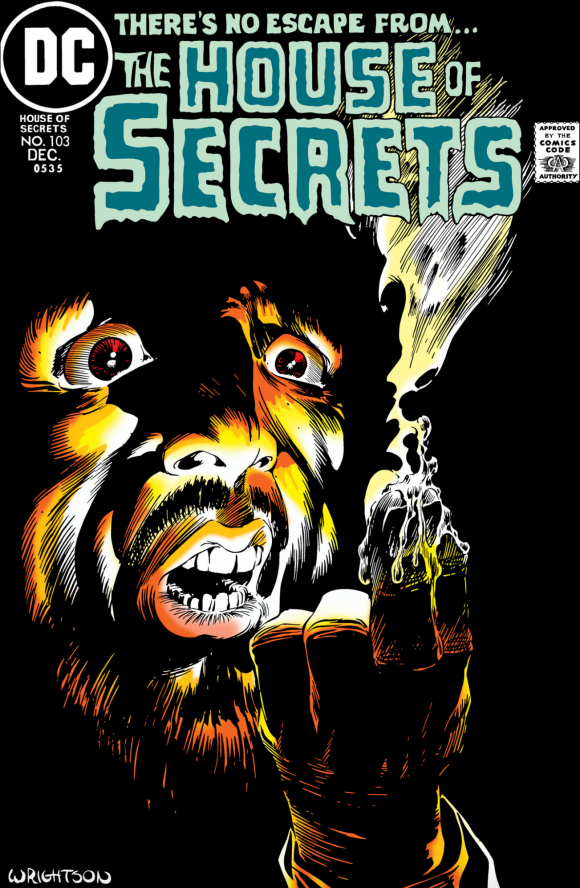 DC didn’t tend to feature its horror hosts on the covers very often, but there were exceptions, like this stunning portrait by Bernie Wrightson of HOS host Cain. Cain was based on comic book fan and DC Comics assistant editor Mark Hannerfeld and I wouldn’t be surprised if Bernie used Mark as a model for this piece. The mood and subdued but sickly colors create a perfect blend of Cain’s usual frightened befuddlement. While not a horror comic per se, Michael Fleisher’s tenure on the Spectre feature in Adventure boasted a beautiful run of horror-inspired superhero covers by series artist Jim Aparo. Having turned the supernatural Spectre into a manic avenging angel, Fleisher set him off on a mission to punish evildoers in as ironic and horrific a fashion as possible. Bad guys were turned to wood and run through lumber mill saws, or were frozen and smashed to little ice cubes, or, as here, melted like a wax candle. (By the way, this ish came out this week in 1973. Such timing! — Dan)