DIRECT COMMENTS: The celebrated Mr. K honors one of comics’ greatest artists, who was born 89 years ago…

“I’m a more or less a self-taught artist. I completed all my elementary schooling, junior high and high school, where I took all the art courses that were available. Fine arts, interior design, anything they had, but there was never any comics or cartoon courses. They weren’t recognized at the time, so it was mostly straight stuff, but that gives you a good background in the basics. I also took a course at the Hartford Art School, a life drawing class. After about half a year, I was pretty well into it, drawing pretty well, and the instructor took a look at what I was doing and said that there wasn’t much more they could offer me by way of instruction. All I did was keep drawing on my own, studying all the comics, all the styles, learning as I went.”

Nick held his own on the demanding Brave and Bold, which was edited by Murray Boltinoff and scripted by Bob Haney, neither of whom gave a wet fart for the rest of DC’s continuity. The “Haneyverse” Batman/Bruce Wayne was his own man… which was whatever man was needed for the current story. 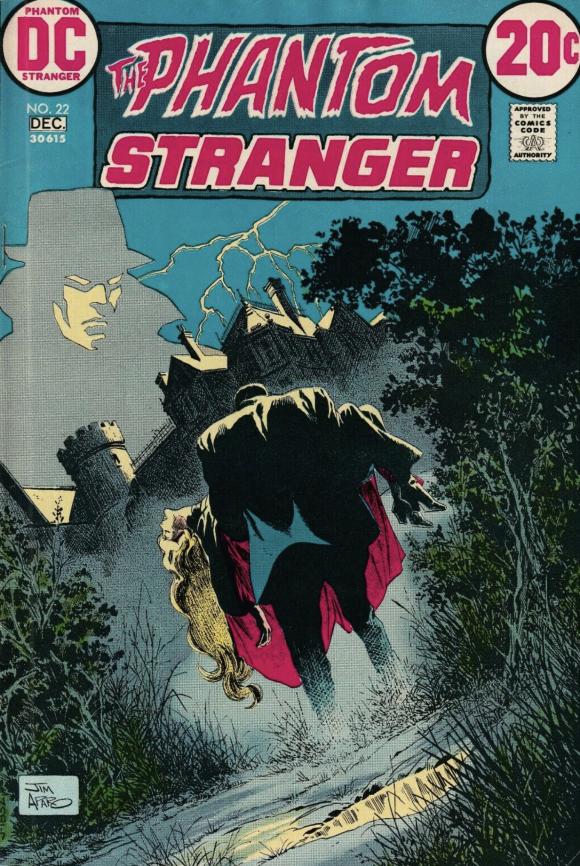 “I got The Brave and the Bold… because of Phantom Stranger,” Jim told me in the 1990 interview that appears in Direct Comments: Comic Book Creators In Their Own Words. “The book starred Batman, of course, and they wanted to team him up with Phantom Stranger, so editor Murray Boltinoff, said “What better guy to draw this than the artist on The Phantom Stranger?” I’d never drawn Batman up till then, so it was a big thing for me. … After Aquaman was cancelled, they switched me over to Brave and Bold on a permanent basis. I had a long association with Brave and Bold.”

Jim would take over pencilling Batman in 1987 for another long association with the Caped Crusader, including the infamous “A Death In the Family” storyline where fans voted to kill the Jason Todd Robin, and “Knightfall,” where Bane broke Batman’s back. But that Haney/Aparo era of B&B will always be my favorite depiction of the Dark Knight. Ever! 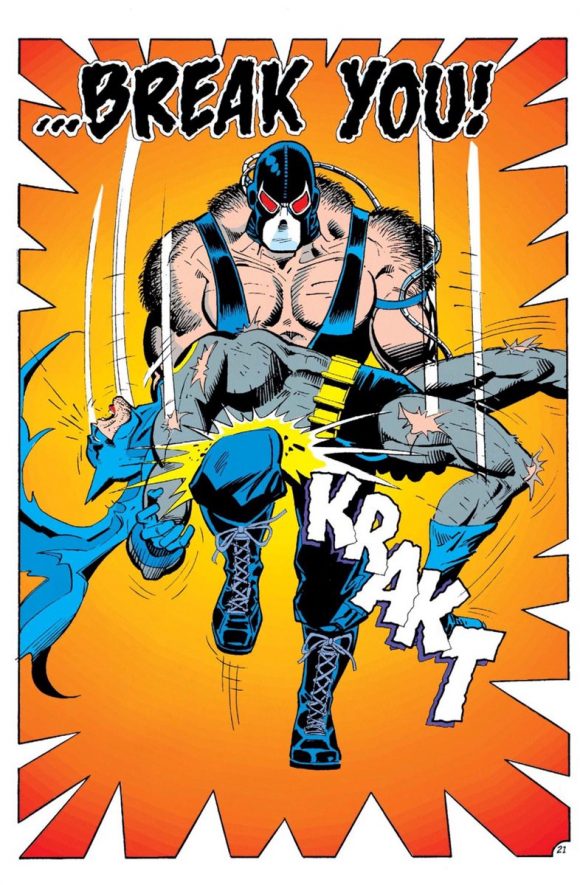 I finally whittled my list of covers down to the requisite 13, but it wasn’t easy… and I did keep the covers of both the issues of B&B I wrote because it’s my column and I want to. Also, they’re good! Jim only drew the interiors of one of those issues, #175’s Lois Lane team-up from 1981. When I finally had the opportunity to meet him at a convention in Chicago 15 years later, I led with that fact, and before I could finish the sentence, Jim said, “I remember that one, with Lois Lane and Metallo. That was a fun story.”

Here then, MY 13 FAVORITE JIM APARO BRAVE AND THE BOLD COVERS, in chronological order:

The Brave and the Bold #107 (June/July 1973). The composition of this one is a bit wonky — the way this is set up, it looks like Black Canary is staring straight at the off-panel gunman — but the depictions of her and Batman are spot on. 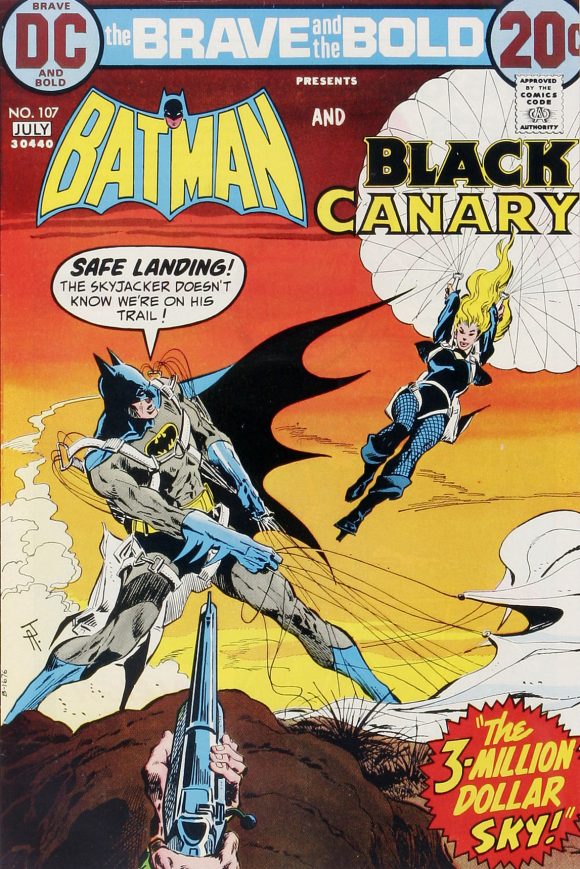 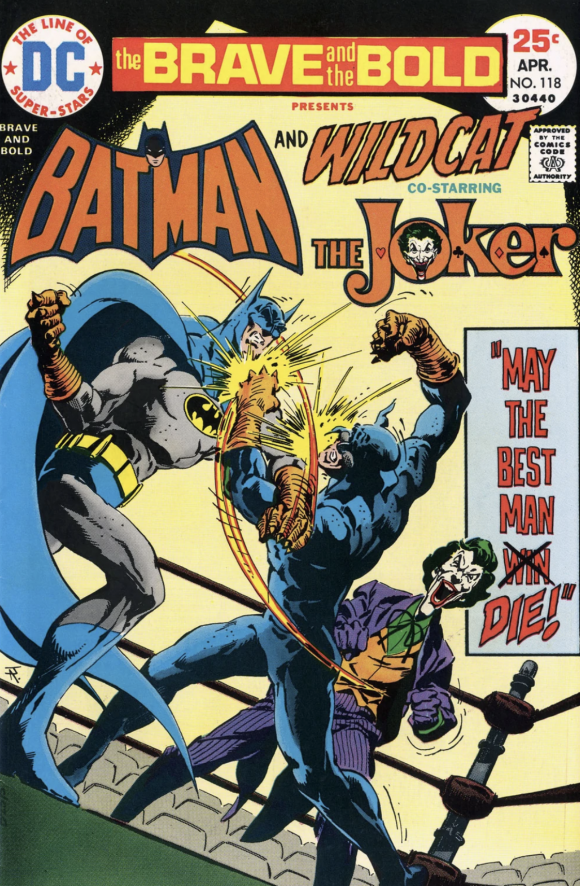 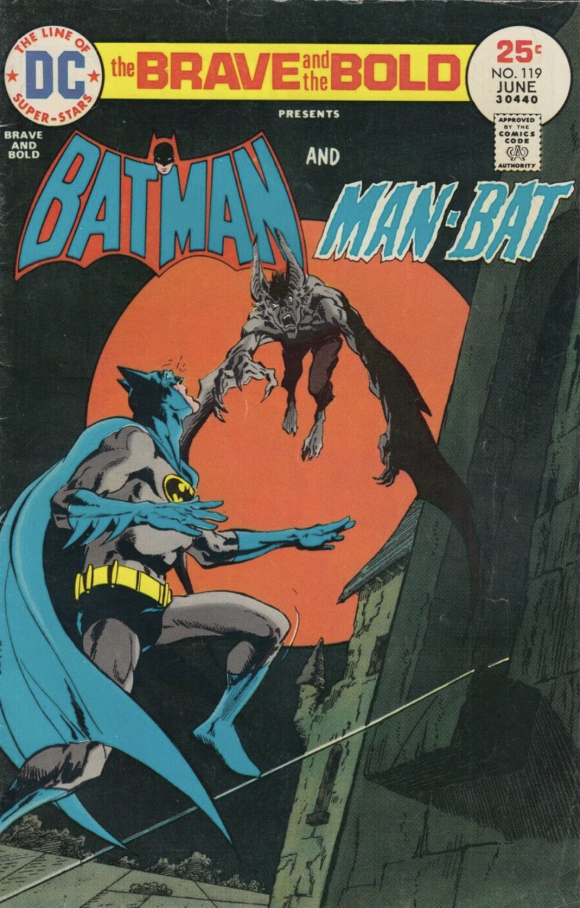 The Brave and the Bold #124 (January 1976). Featuring an actual quote from editor Murray Boltinoff! 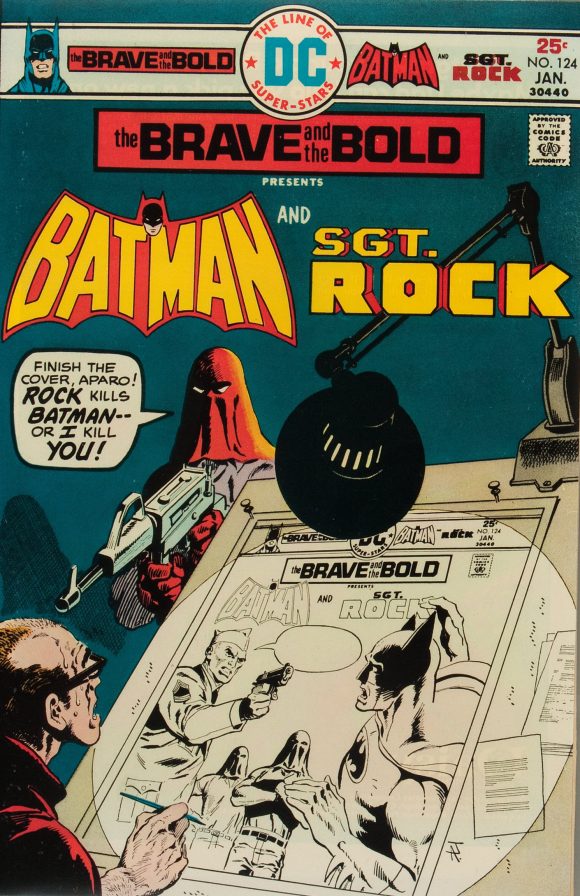 The Brave and the Bold #145 (December 1976). Aparo uses the compelling conceit of featuring the supernatural hero as an ominous, observing shadow on the wall. 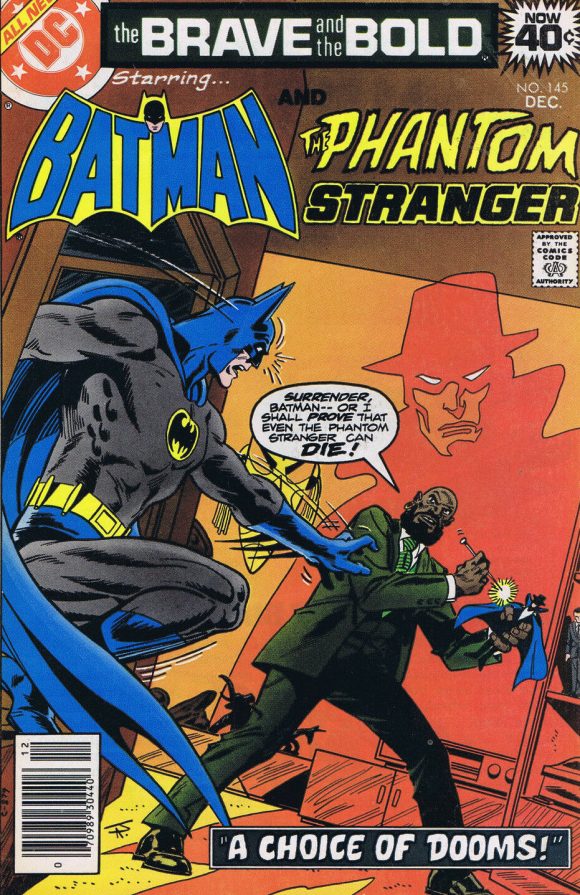 The Brave and the Bold #147 (February 1977). This looks like the type of cover an editor commissions when he still has no idea what’s in the issue other than the guest star. Nonetheless, a fine pin-up shot of the team we’d apparently been begging to see. 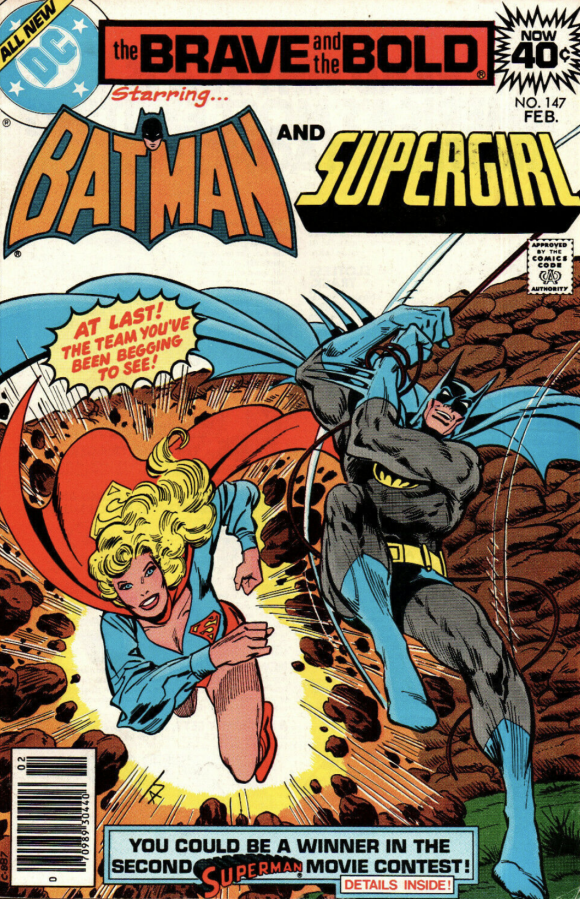 The Brave and the Bold #156 (November 1979). Another cover that could have used fewer logos and more headspace. But Jim manages to squeeze Dr. Fate in there in a pose and style that suggests more than a passing nod to the previous work on the character by Walter Simonson. 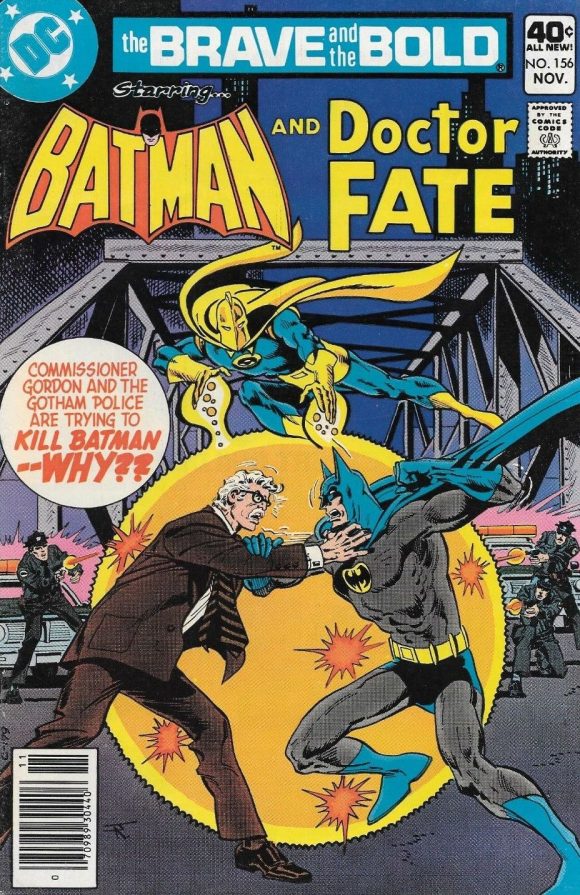 The Brave and the Bold #163 (June 1980). The first of two covers for issues of B&B that I wrote, which I likely would have selected even if I hadn’t been involved in it. (Dick Giordano drew the story itself, so win-win, me!) 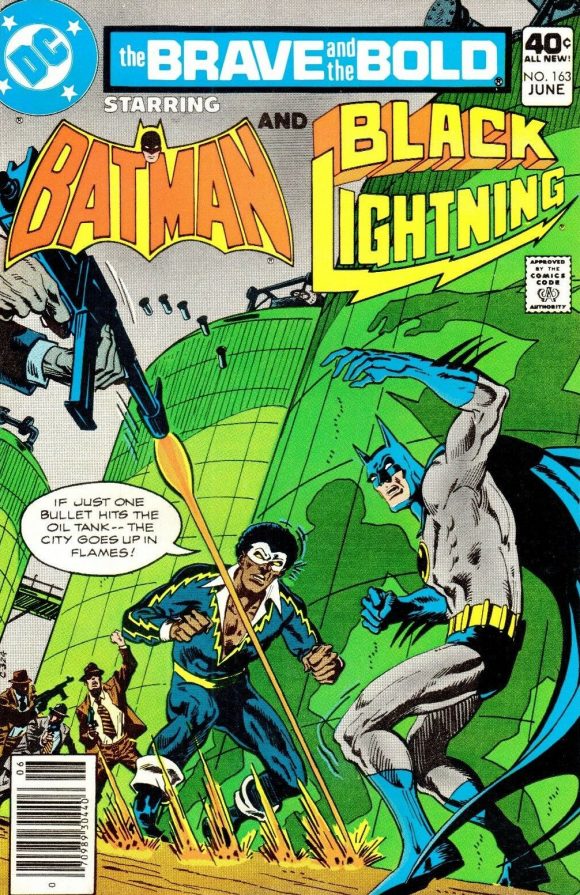 The Brave and the Bold #175 (June 1981). Again, another strong contender for a favorite even if I hadn’t written it. I love the way he focuses attention on Batman in the foreground with heavy lines and shadows, with the weight of the drawing decreasing to fine lines in the distance. 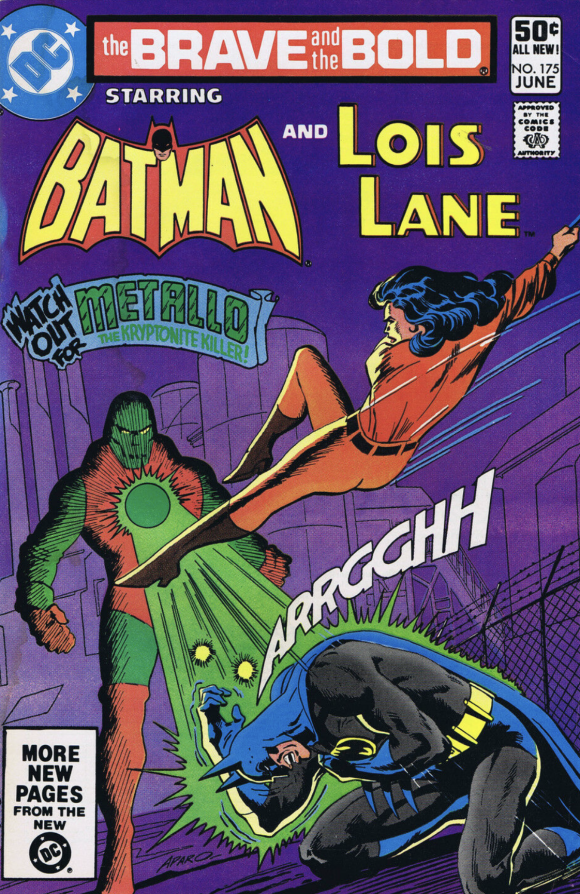 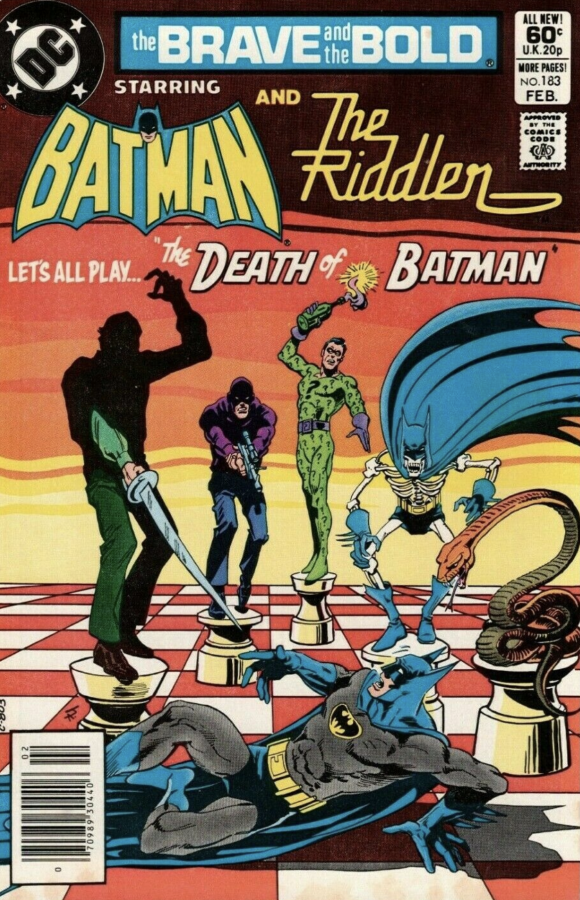 The Brave and the Bold #196 (March 1983). Drop the trade dress and this image is suitable for framing. 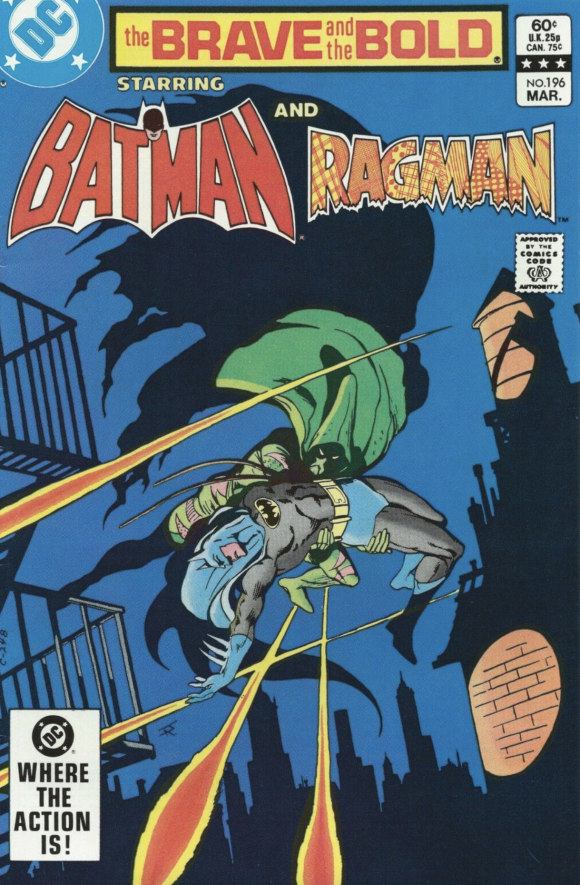 The Brave and the Bold #199 (June 1983). Giant red Spectre eyes exaggerated for effect aside… 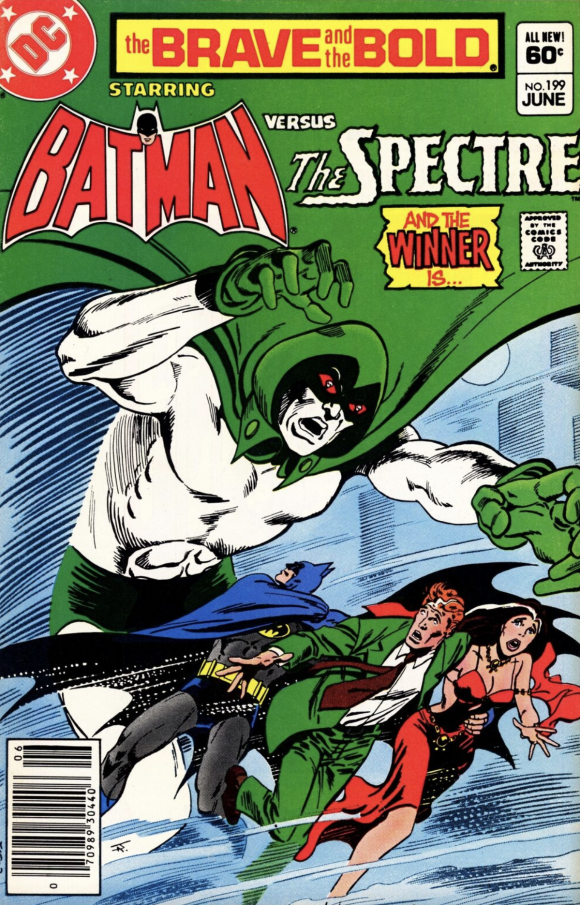 The Brave and the Bold #200 (July 1983). Jim’s cover for the final issue of B&B. It was sad to see the venerable title take its last bow. Fortunately, the venerated artist behind it would shortly be back, on Batman and the Outsiders. 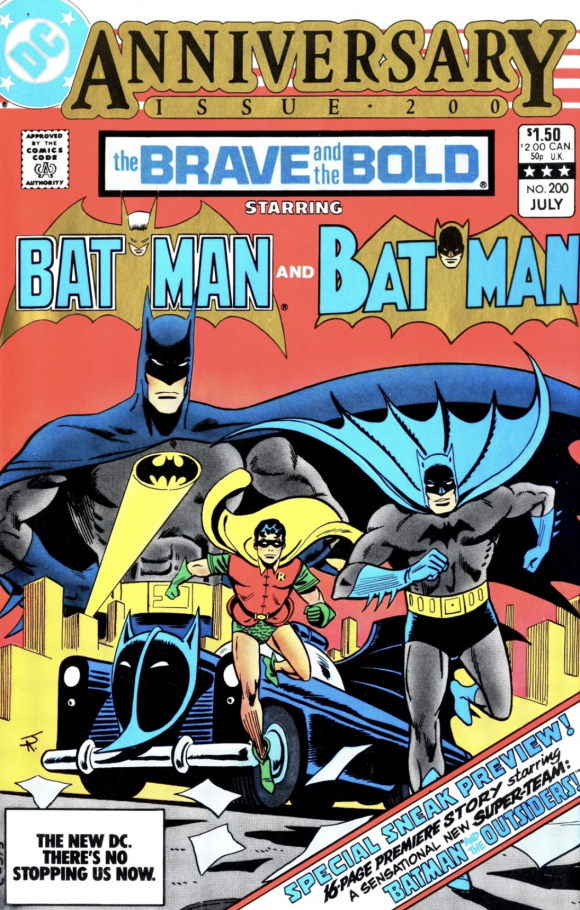 NEXT: The Man from Missouri

“Roy (Thomas) sent me the Marvel writer’s test, which consisted of scripting the dialogue over photocopies of a Marvel story. I took the test, mostly as a lark, and Stan (Lee) offered me a job. So, I mounted my trusty steed, in this case an old Ford station wagon, left a note telling my editor at the newspaper that I quit — the most irresponsible thing I’ve ever done — and took off. I would have killed me if I was him. But I got to New York and the settled into the job for Stan. About six months later I went freelance.”