The celebrated Mr. K picks the best of Marvel’s Second Wave of bodacious beasts: Vampires, werewolves and mummies — oh, my! 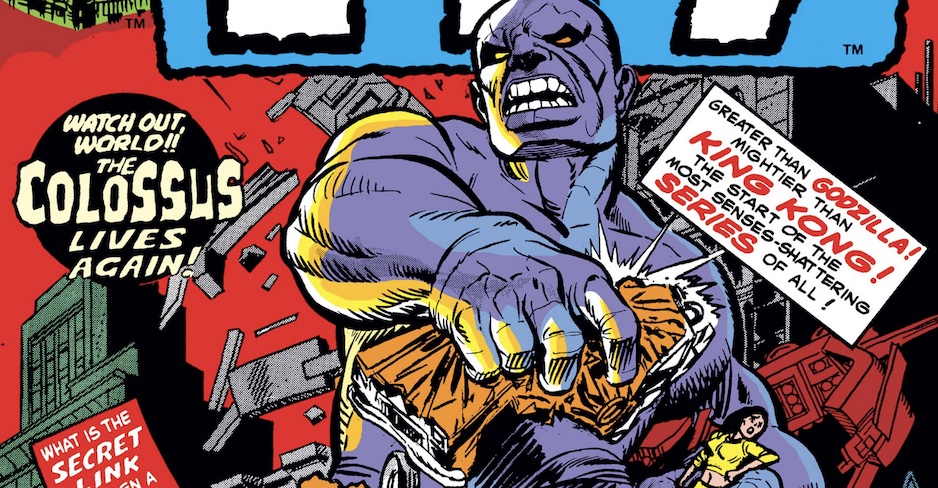 The Mighty Monsters of pre-Marvel Atlas Comics — my 13 Favorite of which was the subject of my previous column — set a standard for monsters that has never been equaled. Springing from the pencils of (mainly) Jack Kirby and Steve Ditko, monsters named Grogg and Moomba and Fin Fang Foom rampaged through the pages of the anthology titles that would soon be usurped by 1960s superheroes.

Marvel kept the monsters alive in the new superhero era, reprinting them often in comics and magazine formats. As had been the case since the implementation of the Comics Code Authority in 1954, the depiction of more lurid horror wasn’t allowed… neither was the use of the word “horror” for that matter. Here’s the CCA’s own published standards: 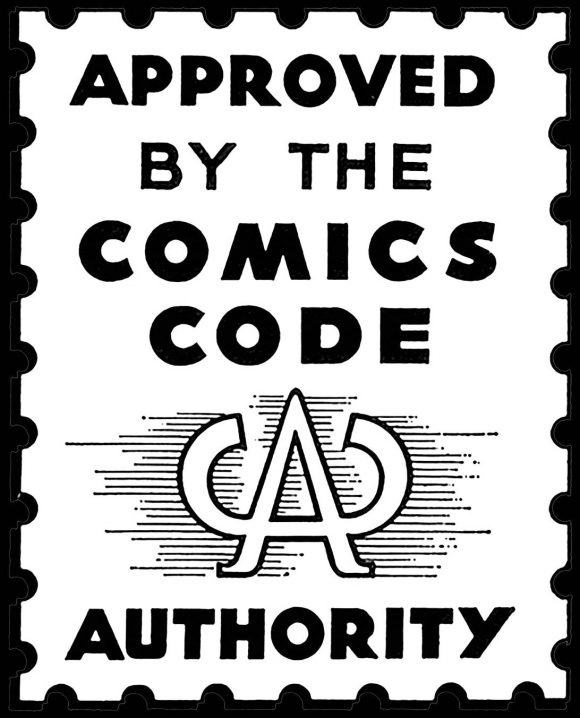 The rules were relaxed somewhat in a landmark 1971 update of the Code rules and regs: “Scenes dealing with, or instruments associated with walking dead, or torture, shall not be used. Vampires, ghouls and werewolves shall be permitted to be used when handled in the classic tradition such as Frankenstein, Dracula, and other high caliber literary works written by Edgar Allan Poe, Saki, Conan Doyle and other respected authors whose works are read in schools around the world.” 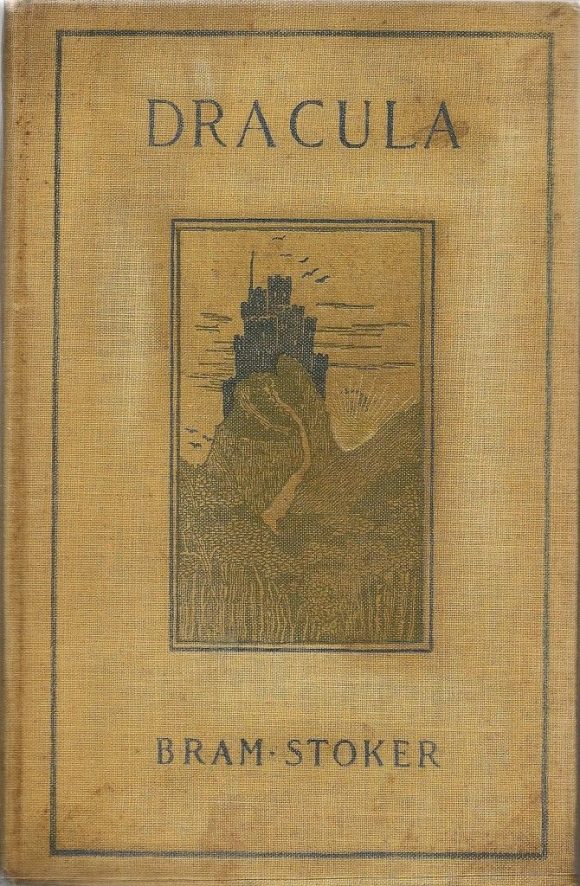 It was a loophole, but one through which creators could drive a tractor trailer full of stories and ideas. Marvel got around the “no zombies” restriction by calling them “zuvembies” and the publisher, taking the CCA at its word, quickly went to the granddaddy of “high caliber literary works” — Bram Stoker’s Dracula — with 1972’s Tomb of Dracula #1. The Monster of Frankenstein, based on Mary Shelley’s classic character, followed in 1973, and before readers knew it, they were up to their necks in the Second Wave of Marvel Monsters and Creatures.

A lot of these new superheroized horror characters didn’t last very long in their own titles or features. Their peak popularity seems to have been between 1973 and 1975, but Marvel being Marvel, they never let anything go to waste and just about all of them have had continued lives in the greater Marvel Universe. 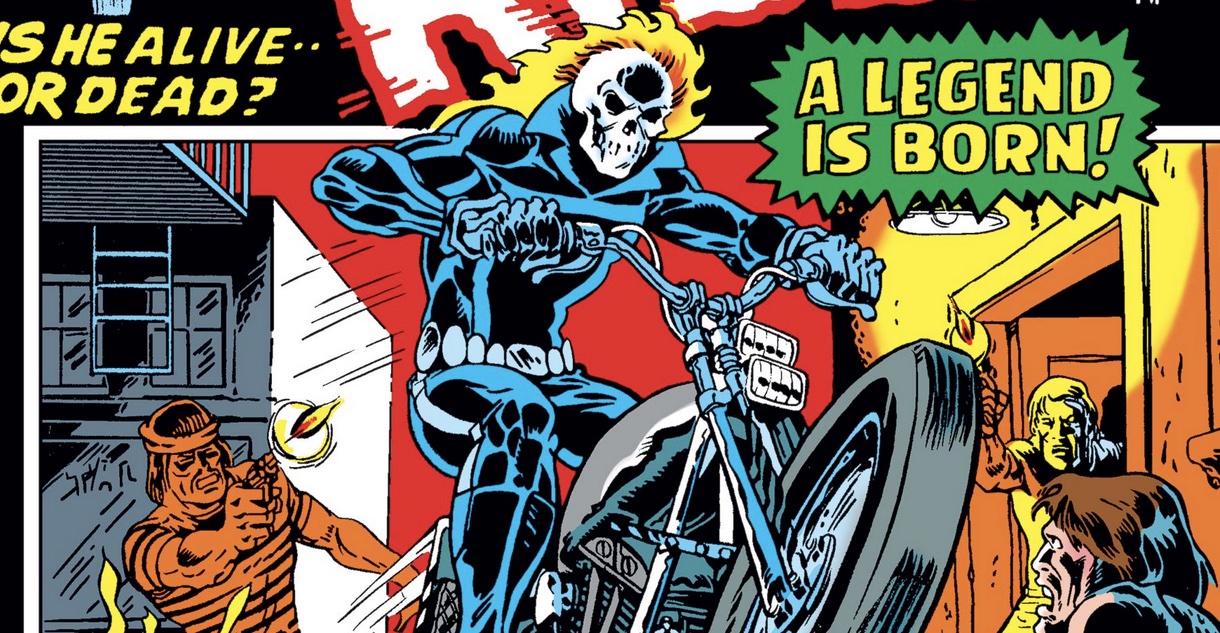 Believe it or not, the CCA seal on a comic book cover carried a lot of weight in the days of newsstand distribution, but as the balance shifted in favor of direct market comic shops, that power was whittled away until the Comics Code Authority ceased to exist as a functioning entity in 2011.

Here then, in order of their introduction (by pub date), MY 13 FAVORITE SECOND WAVE MARVEL MONSTERS — just in time for Halloween:

Man-Thing (May 1971). When will the fools ever learn? Swamps and science just don’t mix! Ironically, Man-Thing (created by Stan Lee, Roy Thomas and Gerry Conway, with artist Gray Morrow) first appeared in the non-Code black-and-white magazine, Savage Tales #1 before moving on to be published under the CCA stamp in color comics. The former Dr. Ted Sallis settled into what would become a classic run under a variety of artists (including Val Mayerik) and writer Steve Gerber. Steve got pre-Morrison-and-Moore meta for the final issue, appearing in the story to reveal that rather than being fiction he had created, the saga of the Man-Thing was his reportage of reality. Far out! Bonus fact: Howard the Duck first appeared in the Man-Thing story in Adventures Into Fear #19! 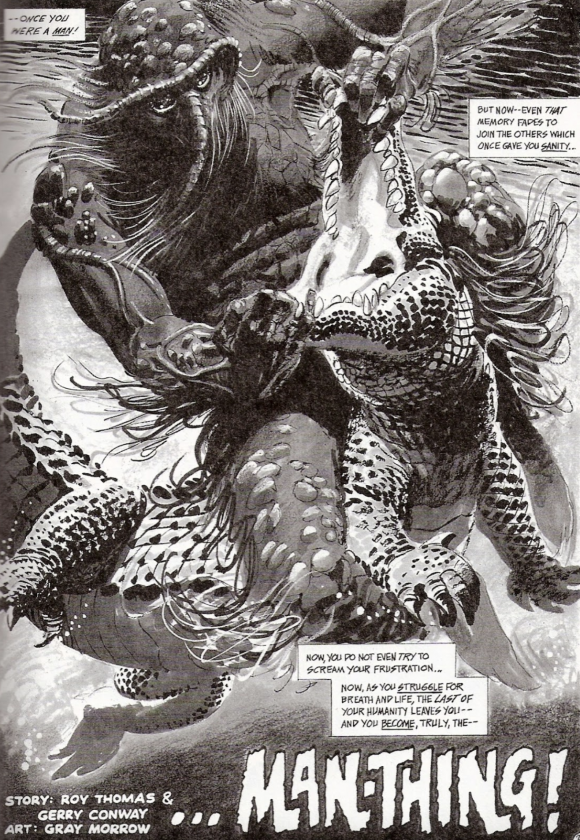 Morbius the Living Vampire (Oct. 1971). While vampiric in nature, Morbius’ origin still made a concession to the Code’s admonition against using non-literary sourced vampires by making him a living vampire, one thus doomed by a failed biochemical attempt to cure Dr. Michael Morbius’ rare blood disease rather than the supernatural vampire’s bite. Starting as a fairly standard supervillain for the wall-crawler by Roy Thomas and Gil Kane in The Amazing Spider-Man #101, Morbius morphed into a dark, brooding, and brutal vigilante with an insatiable lust for human blood! Scary stuff, huh, kids! 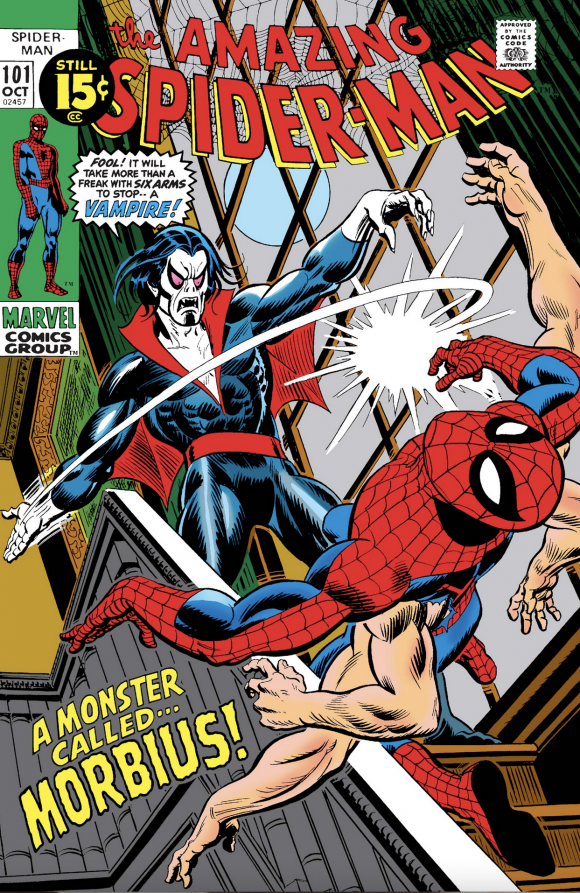 The Tomb of Dracula (April 1972). A book that had six different writers over the course of its first seven issues, The Tomb of Dracula finally managed to find its footing under Marv Wolfman, with artists Gene Colan and Tom Palmer. The series ran for 70 creepy issues, a little over seven years, during which it developed its own unique take on some familiar names from the Stoker original, like Van Helsing the vampire hunter, and introduced some of its own, including Eric Brooks, aka Blade (The Tomb of Dracula #10). 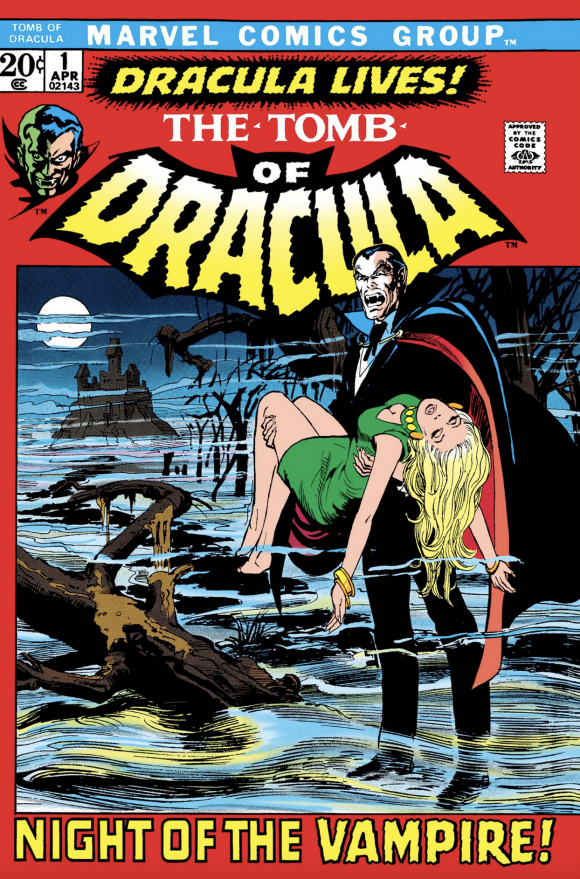 Ghost Rider (Aug. 1972). Motorcycle stunt rider Johnny Blaze traded in trick riding for tragedy when he agreed to give his soul to Satan to save the life of his father in Marvel Spotlight #5. Of course, nothing is ever what it seems in Marvel comics, not even Satan, but the story by Roy Thomas, Gary Friedrich and artist Mike Ploog launched the flaming-skulled scourge of evil on the fast track to Nicolas Cage and fame! By the way, this was the first Mike Ploog art I ever encountered. 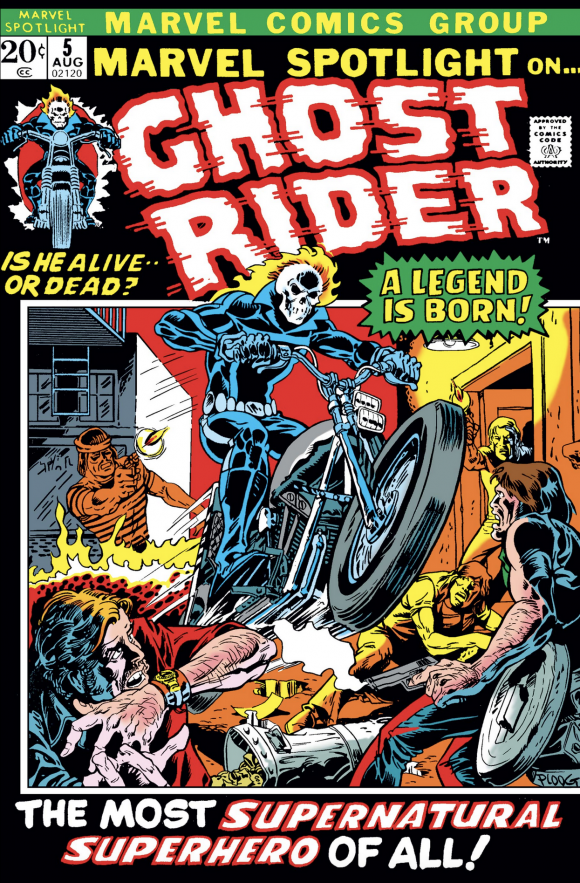 Werewolf by Night (Sept. 1972). Introduced in Marvel Spotlight #1, Jacob Russoff/Jack Russell came by his lycanthropy honestly, through heredity. Quite a long and convoluted one at that. Created by Roy Thomas, Jeanie Thomas, Gerry Conway and, once again, artist Mike Ploog. After his two-issue try-out in Spotlight, Jack Russell graduated to his own title (yes, he did, because he’s a good boy! Yes, he is! Yes, he is!), which ran for 40 issues, through March of 1977 and featured the first appearance of Moon Knight. 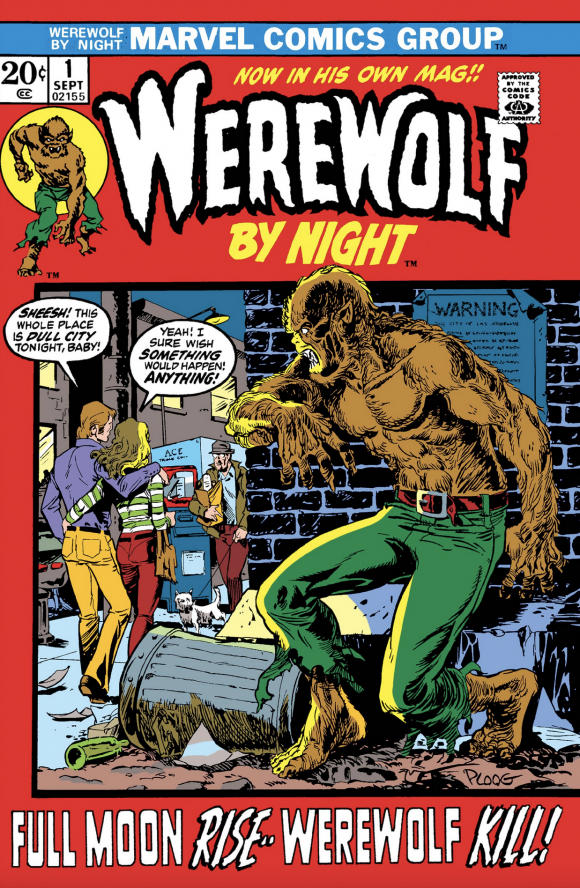 The Monster of Frankenstein/Frankenstein’s Monster. (Jan. 1973). Another classic public domain monster to receive the Second Wave treatment was Mary Shelley’s Frankenstein. Roy and artist Dick Giordano had been doing a straight serialized adaptation of the original novel in the black-and-white Vampire Tales magazine and Roy wanted to bring the monster into the present for a new series. Beginning with their own three-issue retelling of the original novel, writer Gary Friedrich and the current go-to horror artist Mike Ploog placed the Monster in suspended animation in 1890 and revived him in the 1970s, lasting 18 issues in all. 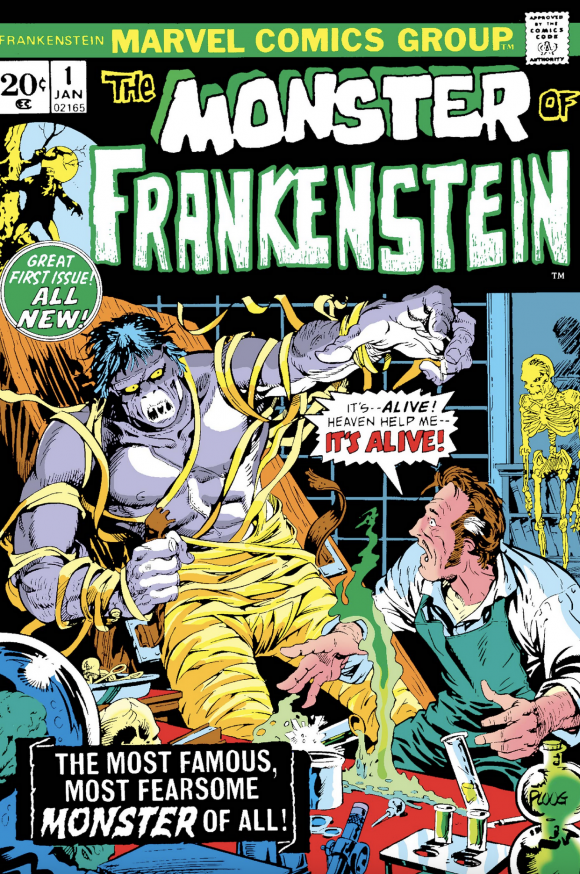 The Living Mummy (Aug. 1973). I guess having already hit the Big Three Universal Monsters of the 1930s, Marvel went for broke and added the Living Mummy to the line-up. Introduced in Supernatural Thrillers #5, the Steve Gerber/Rich Buckler-created Mummy (a fellow named N’Kantu) was originally a stand-alone story but returned a couple of issues later and stuck around for another year, mostly under the stewardship of writer Tony Isabella and artist Mayerik. 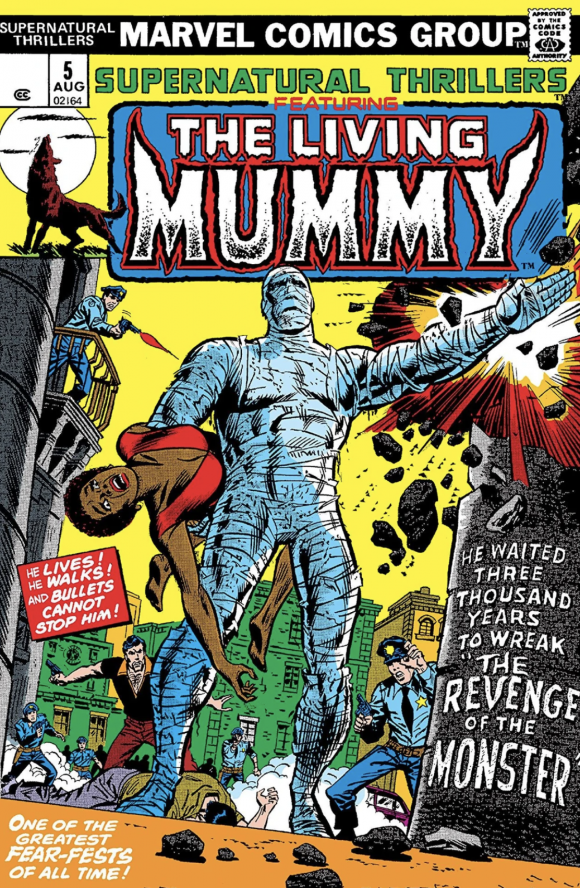 Brother Voodoo (Sept. 1973). Marvel did that voodoo that they do so well with Brother Voodoo, created by Len Wein and John Romita for Strange Tales #169, based on Stan Lee’s suggestion of a heroic practitioner of voodoo and black magic. The feature itself, written by Wein with art by Colan, starred Haitian-born/U.S.-educated psychologist Jericho Drumm, who returns home to find his brother, the local houngan (voodoo priest), dying from a curse. He then becomes the new houngan, Brother Voodoo. Some strange stuff, but Colan made it look cool. 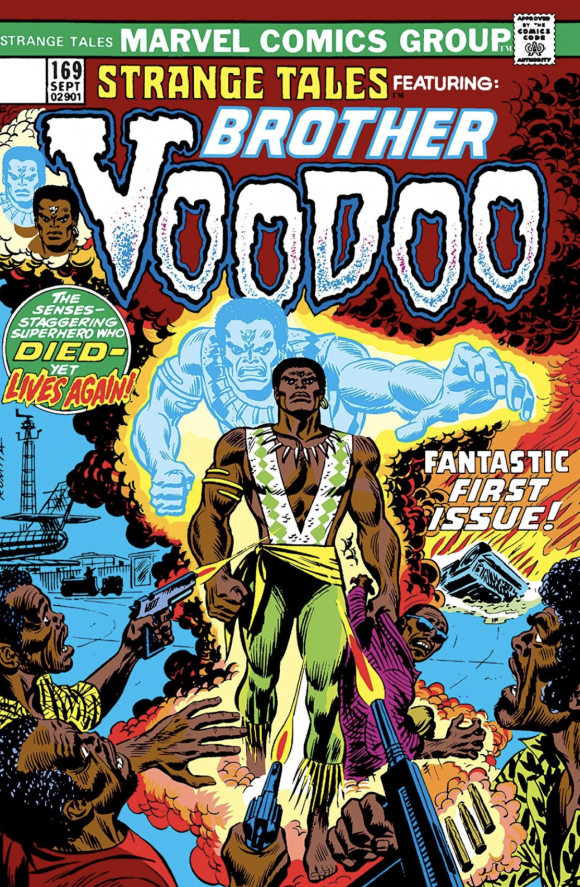 Man-Wolf (Sept. 1973). Life isn’t easy for tertiary comic-book supporting characters, even one who’s been around since the start, like astronaut John Jonah Jameson III. He had to endure a botched Mercury space capsule reentry, being exposed to alien spores that turned him super-strong and crazy, and years later was glommed on by the Godstone, turning him into Man-Wolf in Amazing Spider-Man #124. Writer Conway was just trying to shake things up for the character, and what he and Gil Kane created for that story became one of the Creatures on the Loose, appearing for just over a year between July 1974 and September 1975. 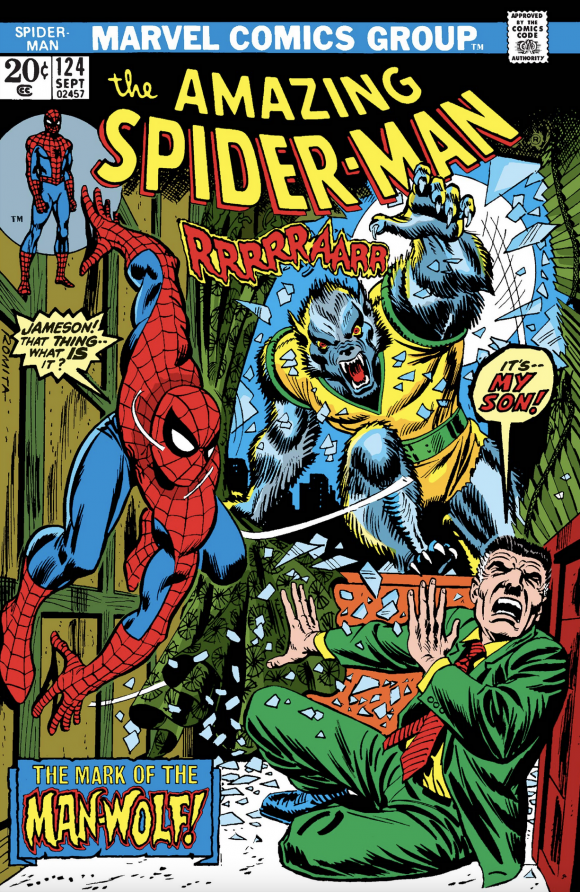 Son of Satan (Sept. 1973). The cork had been pulled and the occult characters were out of the bottle! Stan must have just been riffing when he suggested the series “The Mark of Satan,” starring Satan himself. Editor Thomas had reservations about the idea, countering with the less inflammatory The Son of Satan, which was handed to Gary Friedrich and Herb Trimpe to develop. Satan Jr., aka Daimon Hellstrom (he had a sister, Satana; could you tell these kids never stood a chance?), rejected his father’s dark heritage and clung to his mortality. Good luck with that, right? The series ran for a couple of years in Marvel Spotlight and in its own short-lived title. 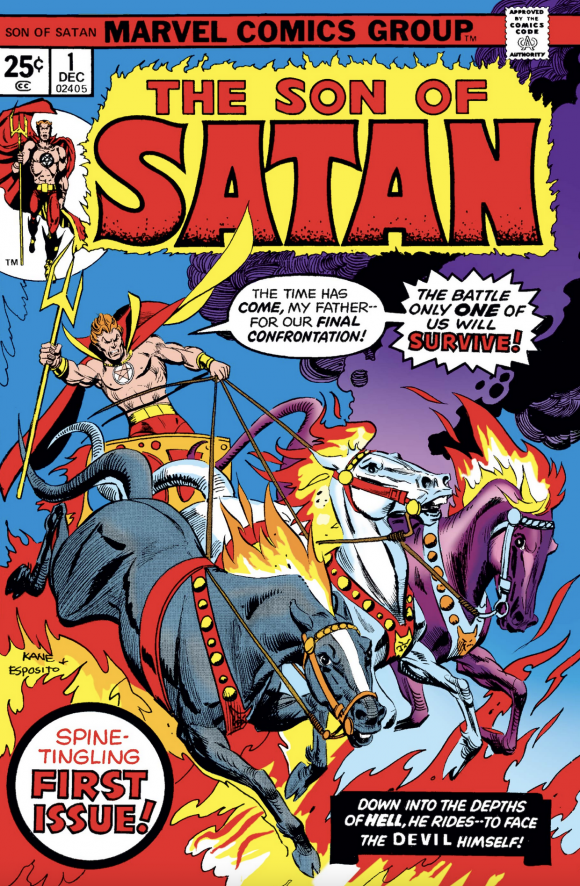 It! The Living Colossus (Dec. 1973). Unexpectedly high sales of Supernatural Thrillers #1 (June 1972) featuring an adaptation of Theodore Sturgeon’s classic story “It!” convinced someone at Marvel that they needed a regular “It!” title of their own. Writer Isabella and artist Dick Ayers turned for inspiration to a pair of recent and well selling reprints, “I Created the Colossus” and its sequel, “Colossus Lives Again” appearing in Monsters on the Prowl #17 (June 1972) and #25 (Sept. 1973) by a writer unknown and artists Jack Kirby and Ayers. Tony’s “It!” utilized the same 100-foot-tall stone colossus, evil aliens, and Hollywood special-effects designer lead character as those earlier stories (Tony cannibalized the original stories and used excerpts from them as flashback sequences in the new material), and the series debuted in Astonishing Tales #21 (Dec. 1973). The Golem (June 1974). You don’t have to be Jewish to like the Golem! The Golem lumbered to life in Strange Tales #174 (June 1974) in a story created by Len Wein (Jewish) and John Buscema (not), based on the 19th century legend crediting a 16th century rabbi with the creation of a behemoth made of clay to protect the Jewish population of Prague. In the Marvel Universe, the Golem was later reanimated by the life force of Abraham Adamson. Remember how I said up above that Marvel kept a lot of these characters in play over the years? My favorite Golem moment came in 2006, when he became a member of S.H.I.E.L.D.’s Howling Commandos Monster Force! I shouldn’t be surprised, though. The original Howlers was also integrated! אמת Scarecrow (Aug. 1975). This scarecrow didn’t say much, but he did pack quite a punch in his three appearances in Dead of Night #11 (Aug. 1975), Marvel Spotlight #26 (Feb. 1976) and Marvel Two-In-One #18 (August 1976). He was created by Scott Edelman and Rico Rival (subsequent stories would be drawn by Ruben Yandoc and Ron Wilson). Less about farming and keeping birds from eating the crops, Scarecrow was a supernatural thriller centered around two brothers, one an artist, the other a journalist, and a mysterious painting of a scarecrow that served as the portal to another world. By this time, the supernatural craze was waning, and one can imagine that Scarecrow might just have been one of the, ahem… last straws.