It’s Halloween season, so the celebrated Mr. K makes an uncommon visit to Marvel Universe — and runs screaming for the hills! 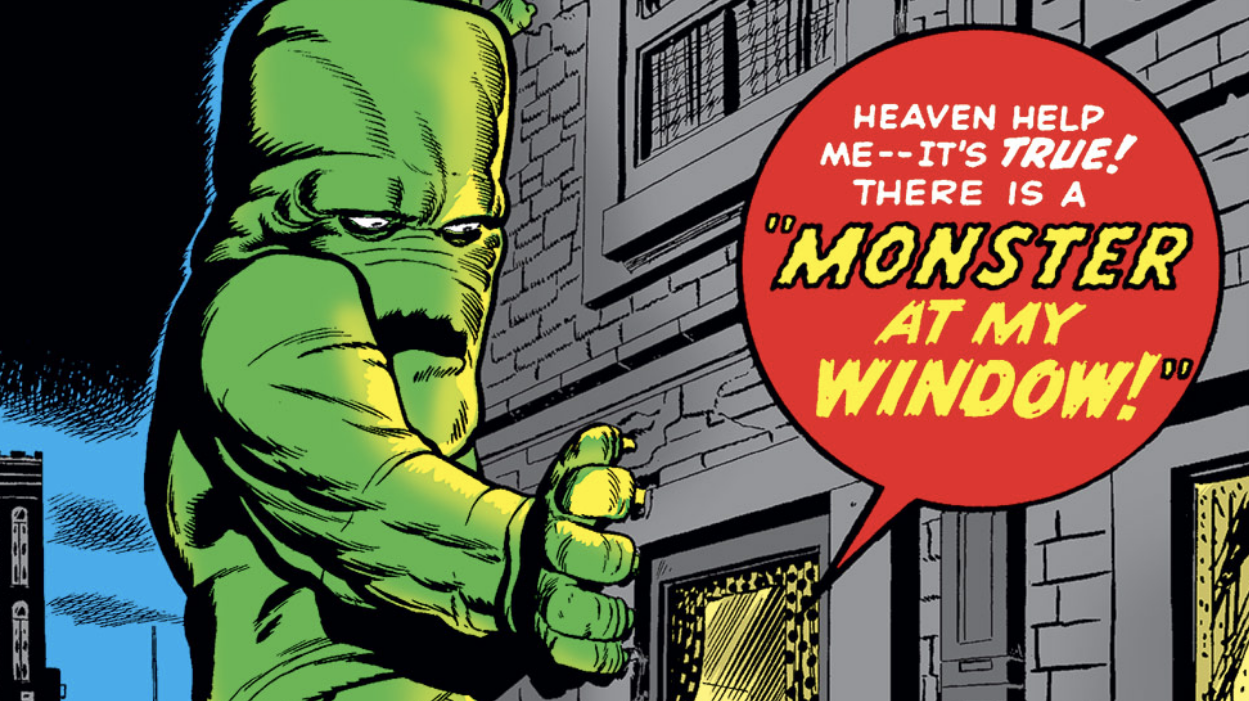 “How about for a change of pace you do a few columns about Marvel?” Dan of 13th Dimension recently asked me.

I’ve never made a secret of the fact that in the “Marvel vs. DC” debate, I fall firmly in the DC Comics camp. I mean, “Marvel Comics” didn’t even exist when I started reading comics in the last year or so of the 1950s (I was born during the Eisenhower administration… the first one), and, in my memory, it was those bold and bright DC covers that dominated the newsstands and spinner racks of the era.

But ever the people-pleaser, I went off in search of some ideas for columns about the House of ideas and almost as fast as you could say “Fin Fang Foom,” I found one: the mighty Monsters of Marvel Comics, those fabulously forced creations by Stan Lee, Larry Lieber, and (mostly) Jack Kirby that filled the pages of such titles as Strange Tales, Journey Into Mystery, Tales to Astonish, Tales of Suspense and Amazing Adventures in those last few years before the rise of the Marvel Age of superheroes. 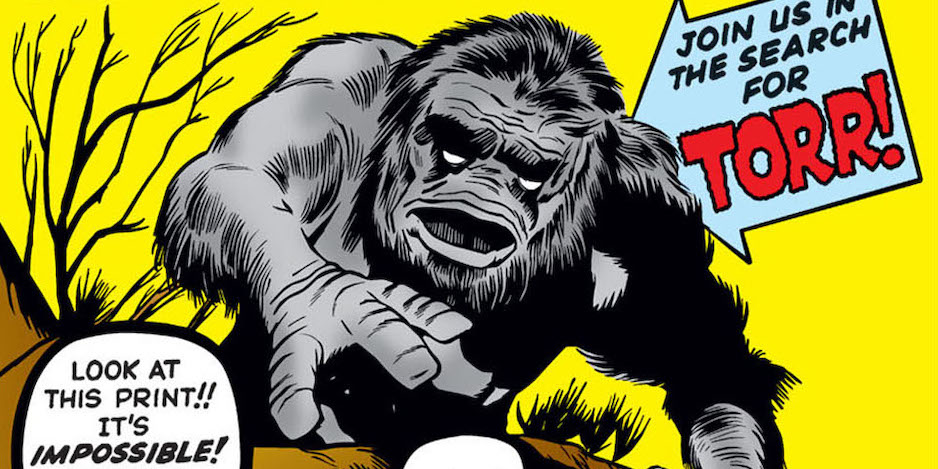 All those books had begun as anthologies featuring what were euphemistically called “mystery” stories in the days when the Comics Code Authority didn’t allow for the depiction of — or even the use of the term — “horror.” Marvel had yet to become Marvel and was publishing as Atlas Comics. Like The Twilight Zone on TV, these anthologies featured a mix of styles, from straight up science-fiction stories to tales of human fears and foibles, to the supernatural and on to strange creatures from strange places — and even the occasional giant Godzilla-variety monster.

But somewhere around 1960, something happened and for the next couple of years the emphasis — at least among the stories chosen to be featured on the covers — shifted almost entirely to monsters. That “something” was no doubt a bump in sales on issues showcasing a dizzying and sometimes silly array of beasts; like any self-respecting trend-dependent publisher, Martin Goodman just followed the money. 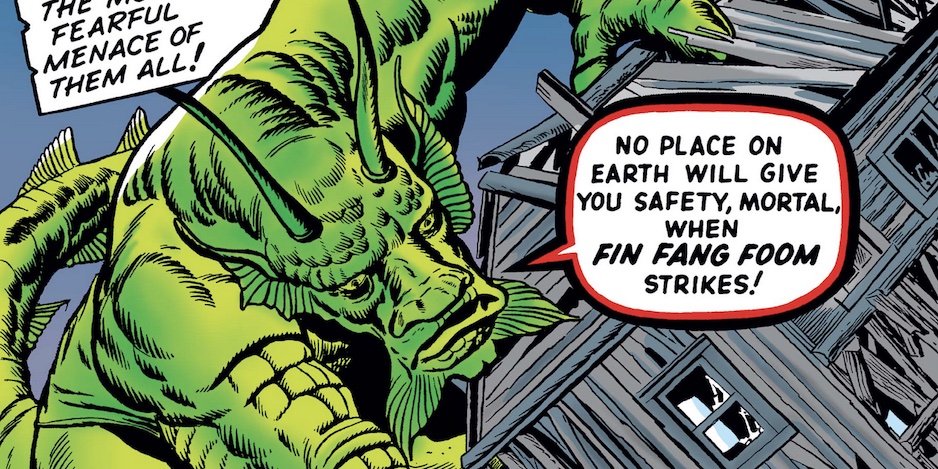 I first fell in love with those monsters with none other than the mighty Fin Fang Foom, as reprinted in 1966’s Fantasy Masterpieces #2. Many, many years later when I was writing a series of General Glory pastiche stories that were printed in DC’s Justice League Quarterly #16 (Autumn 1994), my first choice was to take on the era of the Marvel Monsters with “I Fought Groout, The Creature Who Came from the Cracks in the Earth!” which was penciled by Rick Stasi and, for verisimilitude, inked by the legendary Dick Ayers, the inker of so many of those original tales.

Here then, the countdown of MY 13 FAVORITE MARVEL MONSTERS!

13. Journey Into Mystery #58 (May 1960). Cover by Steve Ditko, the story of “I Found Rro, The Monster from the Bottomless Pit” is a story by an unknown writer, with a splash page by Jack Kirby, and the rest of drawn by Don Heck. The story itself is straight up 1950s sci-fi flick formula: mankind goes where it shouldn’t and unleashes a primal force (i.e., Rro) which they attempt to destroy, learning a valuable lesson in hubris. Actual dialogue (with SPOILER!): “Gentlemen, in our fear and ignorance, we made a tragic mistake! That winged creature possessed a genuine intelligence! He was trying to communicate with us… his name was Rro and he came in peace!” But the thing that gets this story on my list is it proved that all it took to come up with a great monster name was the slamming together of two consonants and a vowel. 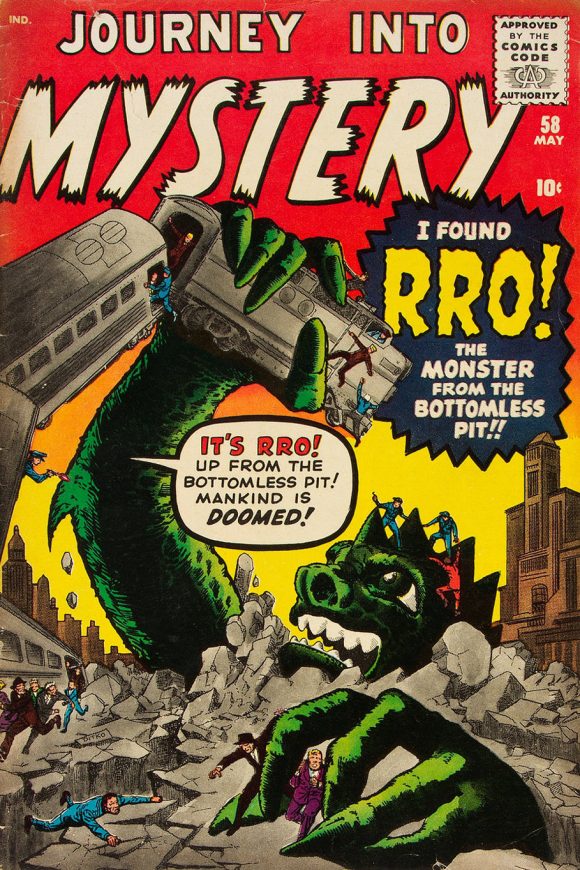 12. Journey Into Mystery #62 (Nov. 1960). Speaking of monster names, that era of stories seemed to be an incubator for the sobriquets of the coming Marvel Age. A case in point (more to come), “I Was a Slave of the Living Hulk!” Cover by Kirby and Ditko, the 13-page story is provisionally credited to Stan Lee (plot) and Larry Lieber (script), with art by Kirby and Ayers. Other than their names, this Hulk bears no resemblance to his later green namesake (this one’s an escaped alien criminal) except for a general all around hulkishness. 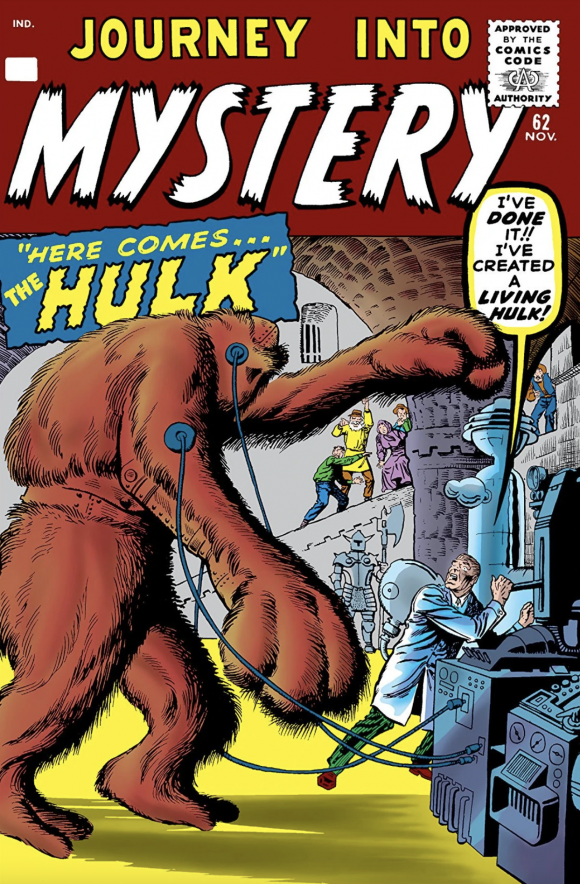 11. Strange Tales #84 (May 1961). You say Mag-neat-o, I say Mag-net-o, but however you want to pronounce it, “The Wonder of the Ages!!! Magneto!” is its first usage in a story by Lee (script by Lieber, again, provisionally) and art by Kirby, this one inked by Ayers, (the later one in 1963’s X-Men #1, by Paul Reinman). Instead of being the leader of the Brotherhood of Evil Mutants, Magneto I was some poor sap of an unemployed strongman who gains magnetic powers on an experimental spaceship and wreaks havoc on humanity. Po-tay-to, to-mat-o, let’s call the whole thing lunch. 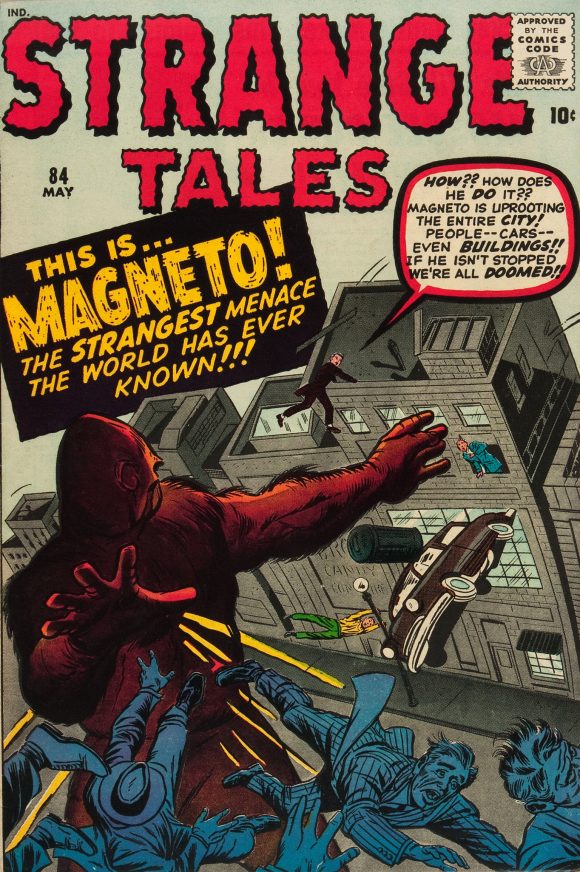 10. Tales of Suspense #9 (May 1960). In Fantastic Four #30 (Sept. 1964) by Lee/Kirby/Chic Stone, Diablo was an evil Transylvanian alchemist. But just a few years earlier, Diablo had been an other-dimensional smoke creature in “I Saw Diablo! The Demon from the Fifth Dimension!” By Lee/Lieber (probably), with art by Kirby and Ayers. Of the two, I’ve got to say I preferred the one who wasn’t easily defeated by a cigarette lighter. 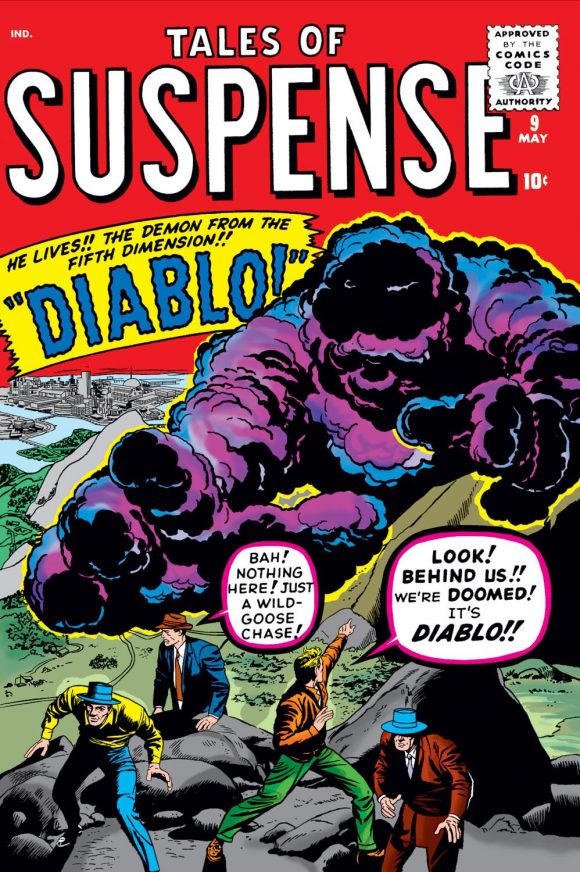 9. Tales to Astonish #13 (Nov. 1960). It’s another fine Lee (?)/Lieber (?)/Kirby/Ayers collaboration in “I Challenged Groot! The Monster from Planet X!” Suffice it to say, his defeat by termites makes old smokey Diablo’s takedown by a Zippo look pretty, pretty lame! Groot later made a few random appearances in the Marvel Universe, ultimately resurfacing in 2006 and going on to stardom in the Guardians of the Galaxy franchise. Are they the same Groot? I tried reading the character’s Wikipedia page but after a couple of paragraphs, all I could declare was, “I am confused!” 8. Tales to Astonish #23 (Sept. 1961). Beware your souvenirs, my friends! We got more Lee (?)/Lieber (?)/Kirby/Ayers goodness in “The Unbelievable Menace of Moomba!” in which we’re treated to the tale of native African wood carvings which are really an advance invasion force under the command of Moomba, whose plan it is round up humanity to… to… do something nefarious, I’m sure. What really got Moomba on this list is… his name is Moomba, for crying out loud! 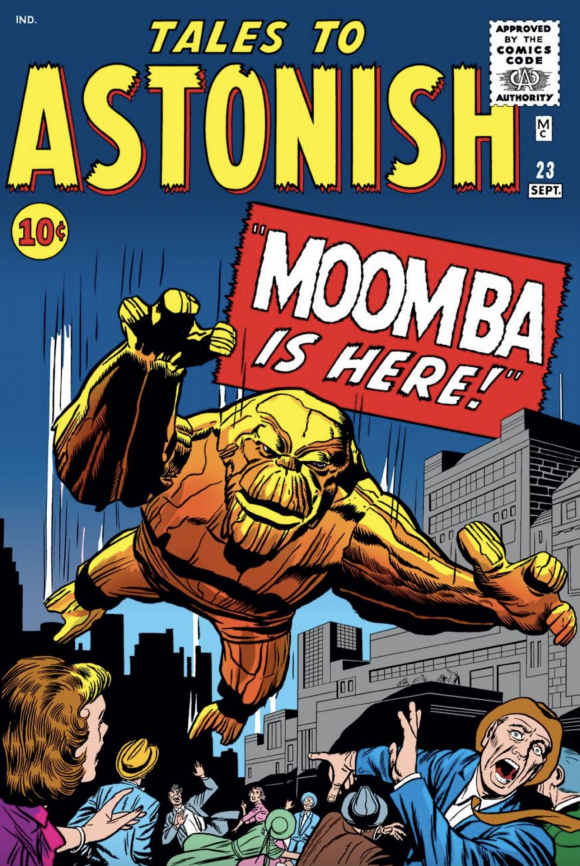 7. Amazing Adventures #1 (June 1961). After a couple of title changes, Amazing Adventures would become Amazing Fantasy and in its 15th issue introduce Spider-Man. But before that it gave us “Torr!” the sad tale of a man who can never reveal that the best friend he murdered had been taken over by the alien Torr and had to be stopped from signaling the start of an alien invasion. Another one by (let’s say it all together!) Lee (?)/Lieber (?)/Kirby/Ayers.’’ 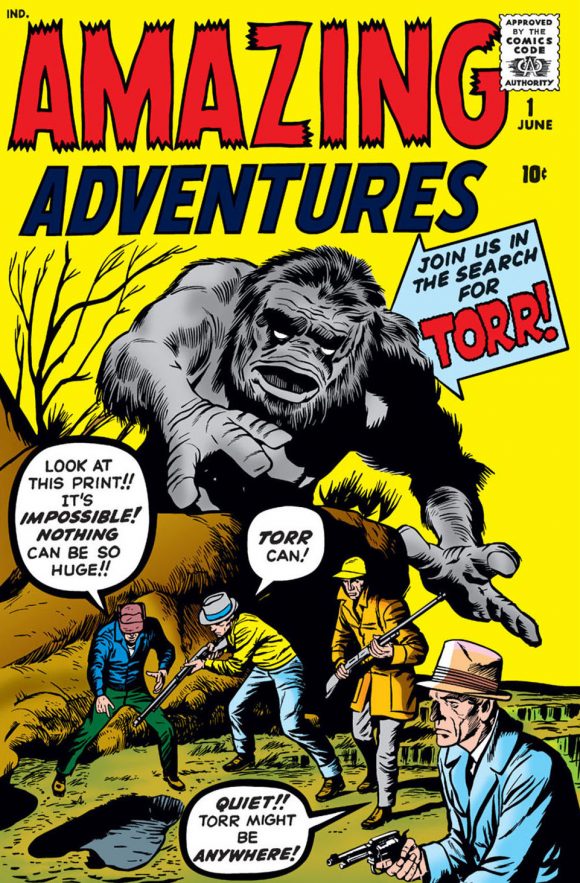 6. Journey Into Mystery #67 (April 1961). Let’s hear it for a great Steve Ditko cover for the (c’mon, you know!)… yes, Lee (?)/Lieber (?)/Kirby/Ayers story, “Gruto! The Creature from Nowhere!” This one wasn’t a bad little morality play: An unscrupulous journalist gets the public to believe an amnesiac alien is a threat, but when the alien recovers, we learn he had really come to share his advanced technology with Earth. Disgusted by humanity’s lies and violence, he leaves without sharing. It would be decades until we discovered the secret of the Gameboy for ourselves. 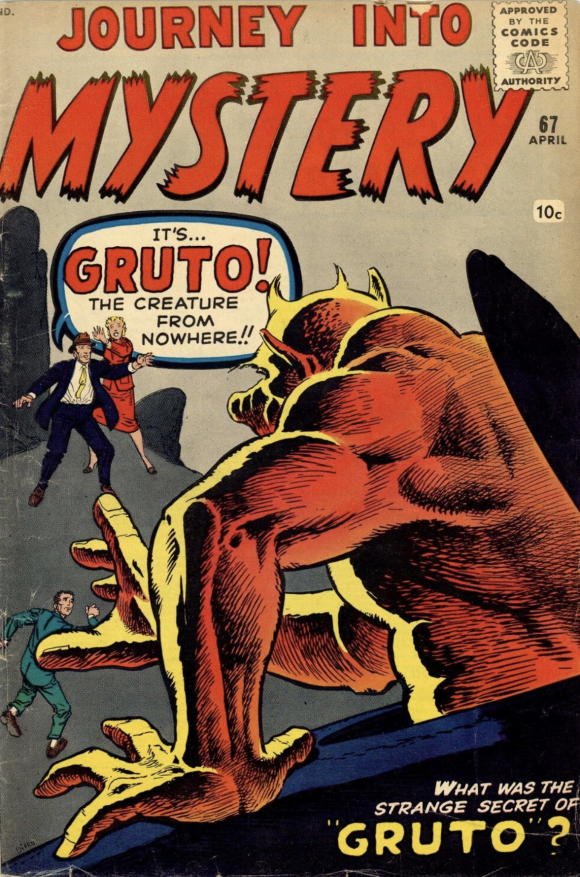 5. Strange Tales #83 (April 1964). A real Cold War thriller, this one – and a bit late in the monster trend. Lee (?)/Lieber (?)/Kirby/Ayers give us “From Out of the Black Pit Came… Grogg!” in which a Soviet atomic test awakens an ancient dragon whose existence a Russian scientist had prior knowledge of, which then makes it possible for the scientist to defect to the US, which had been his goal all along. Got it? Pass the grog! 4. Tales to Astonish #34 (Aug. 1962). I saw the classic 1963 Twilight Zone episode “Nightmare at 20,000 Feet,” starring William Shatner and a gremlin on its first run. My brothers and I (ages 6, 8 [me] and 10) probably shouldn’t have been watching, but there we were in front of the old 21-inch black and white RCA TV when the Shat lifts his window shade and finds that face pressed up against the glass…! I think we all Shat, as well as shrieked in a rare moment of brotherly harmony and ran from the room. Little wonder that I find this cover for “A Monster at My Window” (Lee (?)/Lieber (?)/Kirby/Ayers strike again!) so effective. 3. Tales to Astonish #7 (Jan. 1960). And now for something completely different: a monster story by Steve Ditko (although the cover is penciled by Kirby)! The script is uncredited, but the concept of “I Spent Midnight with the Thing on Bald Mountain!” is practically a primer of a Steve Ditko-style story: a sculptor creates a pair of statues representing Good and Evil and is attacked by Evil when it comes to life. He’s saved by the likewise mysteriously animated Good statue and both his creations fall into the swamp, locked in combat. 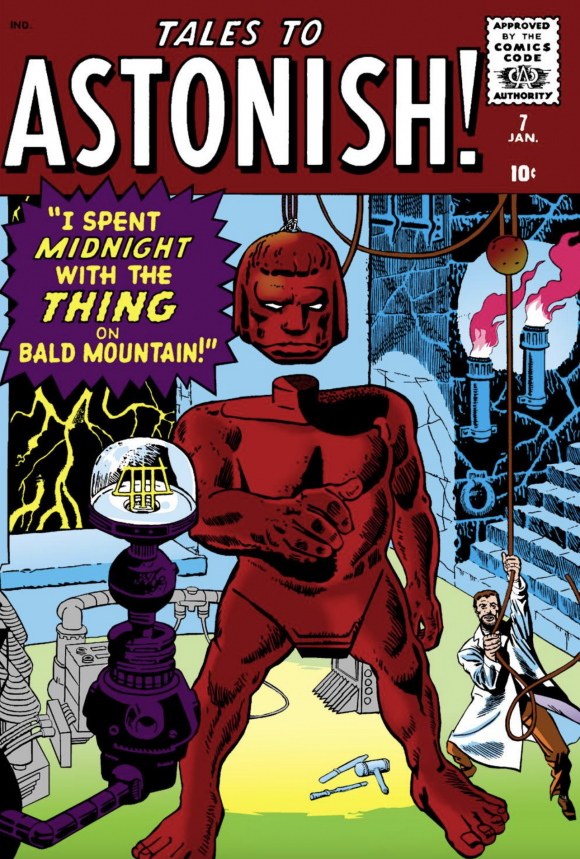 2. Tales of Suspense #14 (Feb. 1961). No need to wonder who created the Colossus, it’s right there in “I Created the Colossus” … and it was (of course! who else?) Lee (?)/Lieber (?)/Kirby/Ayers! It’s another Cold War story starring a Russian dissident, this one forced by his brother to construct a giant statue in honor of the USSR that gets taken over and animated by aliens and defeats the communist regime. A dozen years later, Tony Isabella and Dick Ayers would resurrect the big guy in “It! The Living Colossus,” a short-lived but fondly remembered series. 1. Strange Tales #89 (Oct. 1961). You saw this coming, right? Fin Fang Foom is just about everybody’s favorite Marvel Monster, and for good reason. It’s a solid story (by Lee (?)/Lieber (?)/Kirby/Ayers): a Taiwanese historian awakens the ancient dragon from his slumber to lure him to the sea and destroy a Communist invasion force before returning it to its place of slumber — and, come on, he’s probably the best designed comic book monster ever! Fin for the win!