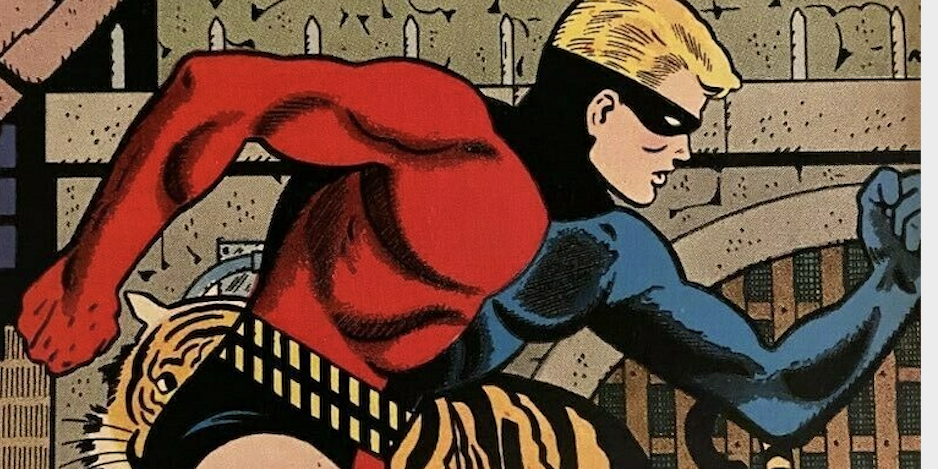 As a 13-year-old first coming across the Charlton Comics work of writer/artist PAM, I knew that whoever this creator, known only by their initials, was, he had it all figured out. There was something familiar and comfortable about his clean, open style and hard, defining line. His storytelling was solid and the composition of his panels no-nonsense. His backgrounds could be sparse or nonexistent, sometimes even weirdly impressionistic, and his characters seemed a little posed; someone once wrote that people “often resembled a drawing of a sculpture of a person.” But it worked.

PAM was, I later learned, Pete A. Morisi (Jan. 7, 1928–Oct. 12, 2003), a Brooklyn-born artist who, more than half a dozen years into what appeared to be a successful career in comics, fulfilled a lifelong dream by joining the New York Police Department and spending the next 20 years in blue. The pseudonym was an effort to keep his two professions separate. 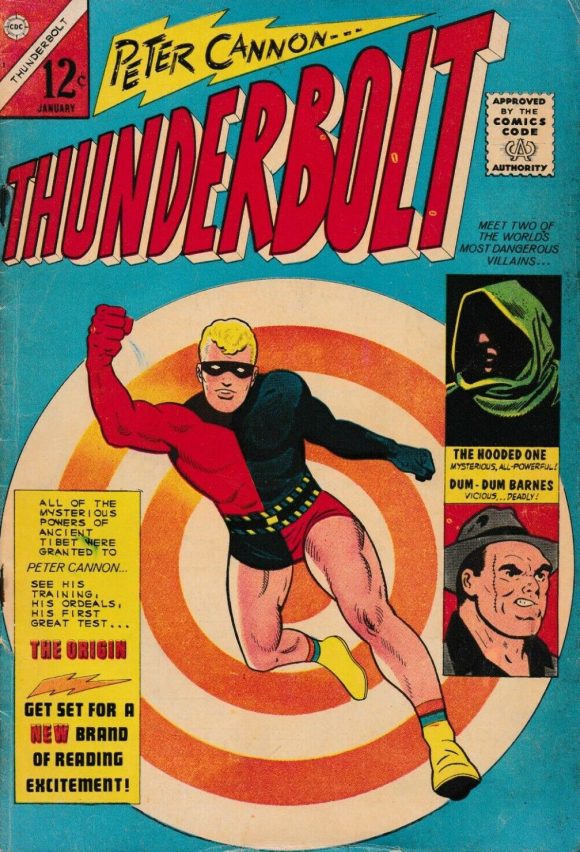 Pete is best known for his creation of Peter Cannon, Thunderbolt, part of editor Dick Giordano’s mid-1960s “Action Heroes” line, along with the revivals of Captain Atom and the Blue Beetle, plus Peacemaker, Nightshade, the Fightin’ 5, and others. But Pete had been plying his trade since the 1940s, writing and/or drawing for Marvel, Harvey, Lev Gleason, Quality Comics, and others in all genres all across the board.

DC Comics bought the rights to the Charlton characters in 1983 and in 1992 gave him his own title, Peter Cannon, Thunderbolt by writer/artist Mike Collins and inker Jose Marzan Jr. that lasted 12 issues. I was the editor of that series (and would later get to write Thunderbolt in a Charlton heroes’ team-up story in Justice League Quarterly, also with art by Collins, this time inked by Eduardo Barreto), and was fortunate enough to spend a very entertaining lunch with Pete and Dick Giordano at New York’s Society of Illustrators, being regaled by tales of early comics and old Charlton. If I hadn’t already been a fan, that afternoon would have made me one. 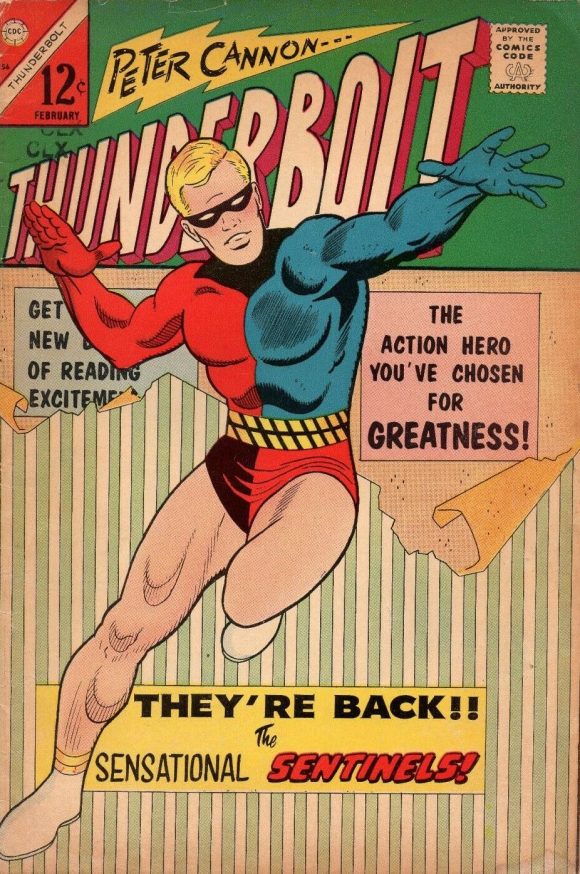 Peter’s parents were part of an American medical team that died fighting the Black Plague in the Himalayas. The child was raised in a lamasery and trained to the peak of physical and mental perfection before being permitted to learn the secrets of the ancient scrolls and how to harness and use the full potential of his mind. Now able to flex his brain, Peter and his turbaned companion Tabu Singh settle in America and hilarity, and superheroics with a supernatural tinge, ensue.

Peter Cannon… Thunderbolt was a solid series and lasted a respectable — for the short-lived Charlton Action Hero line — 11 issues (Captain Atom managed 12, Peacemaker only seven). Unfortunately, the pressure of holding down a full-time job with the NYPD and creating a monthly 18-page story got to be too much for Pete and Denny O’Neil and Pat Boyette had to step in for the last two issues, but Peter Cannon… Thunderbolt remains Pete’s most well-known creation.

2. Johnny Dynamite #11 (Comic Media/Charlton Comics, August 1955). Pete Morisi’s second most well-known creation (with writer Ken Fitch) was detective and sometimes spy Johnny Dynamite. Johnny wore an eyepatch (he lost his eye to a dame with a camera gun, see?), talked tough, and could kick ass with a film noir flair. 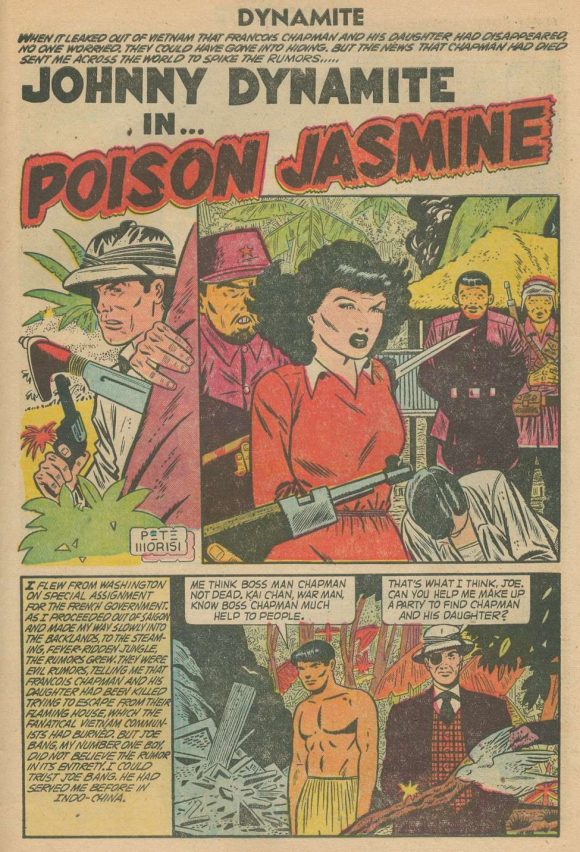 In “Poison Jasmine,” Johnny trades in his fedora for a pith helmet and the streets of the Naked City for the jungles of Viet Nam as he goes on a “special assignment” from Washington for the French government. The overwritten caption that opens the story isn’t a fluke; much of Johnny Dynamite featured copy heavy, and heavy handed, narration, but there was a charm to the strip, and a definite attraction to Pete’s covers, reminiscent of men’s adventure magazine covers.

3. Billy the Kid #12 (Charlton Comics, June 1958). Superheroes, detectives… and Westerns. Back when comics published every genre, Pete proved he could draw them all with equal proficiency and efficiency. 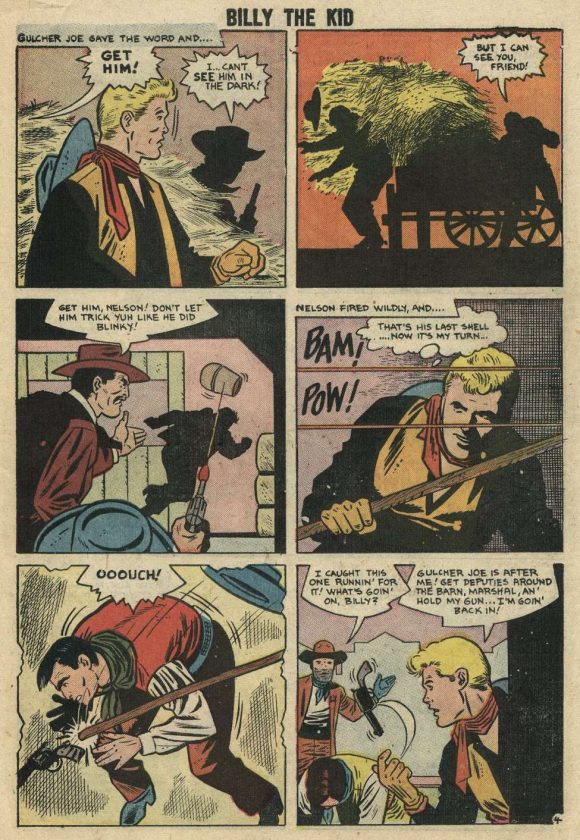 A page from the five-page “No More Notches” provides a nice example of his storytelling and a neat sampler of Pete’s tricks of the trade: medium shots, silhouettes, no or bare minimum/impressionistic backgrounds, and sharp contrast to direct the eye across the panels. The drawing may not have always been the best, but things were moving way too fast for the reader to notice, or care if they did.

4. G.I. Combat #1 (Quality Comics, October 1952). Superheroes, detectives, Westerns… and war! In “Killing Pitch,” a third-rate minor league baseball pitcher redeems himself in the eyes of his squad-mates by turning into a major leaguer with a hand grenade. 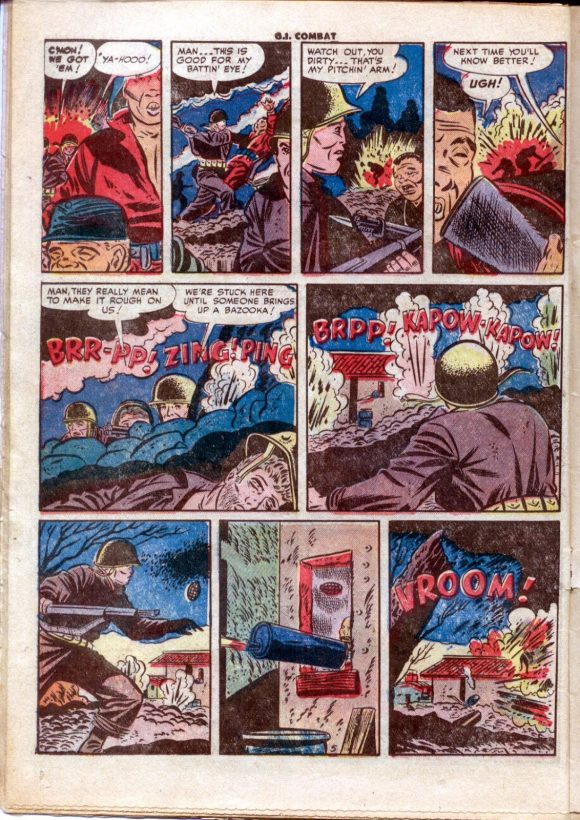 Set during the Korean War (or whichever conflict U.S. troops wore purple uniforms for), there’s not a lot to stylistically connect this story to the later work by PAM; the art is on the crude side and there’s no sign of that hard edge of contrast that would distinguish strips like Peter Cannon. But the storytelling and energy of his drawing is all there.

5. Green Lama #8 (Spark Publications, March 1946). There’s little more than potential in this strip penciled by 18-year-old Pete Morisi. “Treasure Trap,” a back-up strip in Green Lama, tells the tale of Billy and “Skipper,” a pair of seafaring pals who set sail for Rio de Janerio to make some quick dough. 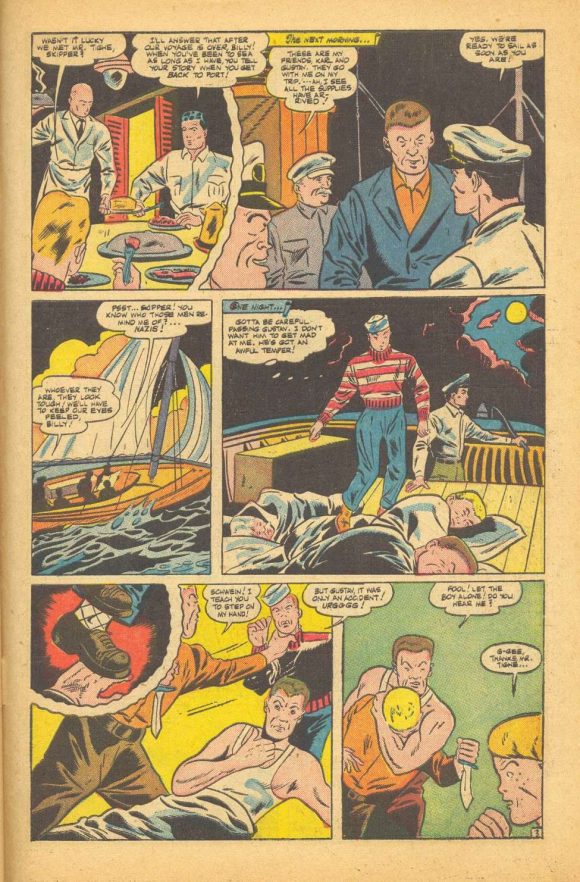 Most sources indicate Pete got his start in comics as an assistant on the newspaper strips Dickie Dare and The Saint before breaking into comics at Fox in 1948, but this 1946 story from Green Lama shows he made his debut even earlier. It’s also a rare instance of Morisi being inked by another brush, in this case that of Sal Trapani.

6. The Arizona Kid #12 (Marvel Comics, November 1951). “Famous young frontier scout” Davy Laramee, aka the Arizona Kid, is on the trail of “Killers Three” in this Atlas story. Pete drew the hell out of this one, with full backgrounds and great expanses of Western landscape. You can imagine him being assigned this script right after having seen a John Ford Western on the big screen and deciding to pay homage. 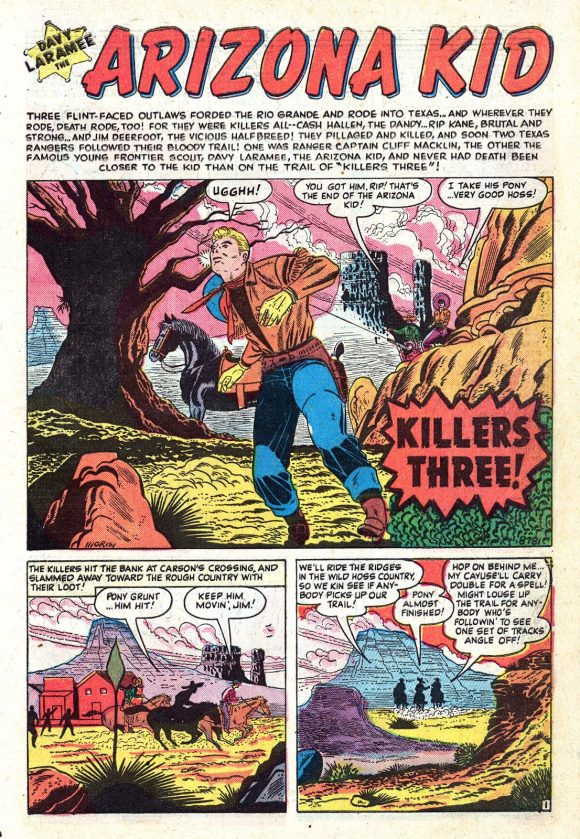 “Killers Three” doesn’t have a single shortcut or cheat in it. Morisi included every tree, cloud, rock, and clot of dirt in the background against which he planted a solid cast of expressive characters. This was the artist finally finding his style and direction, one that he would continue to develop for the next quarter century of his comic-book career.

7. Monster Hunters #1 (Charlton Comics, May 1975). If “Killers Three” was the embryonic Pete Morisi, “The Sea, Its Givings and Its Takings” is the mature artist at work, but one that raises the question of the influence fellow artist George Tuska had on his style over the years. It was a question Pete answered himself at that long-ago lunch at the Society of Illustrators.

During the 1950s, Tuska was considered an “artist’s artist,” one of the guys other artists looked to for style and influence. Pete said he respected George too much to just rip him off, so he wrote George for permission, which was granted. 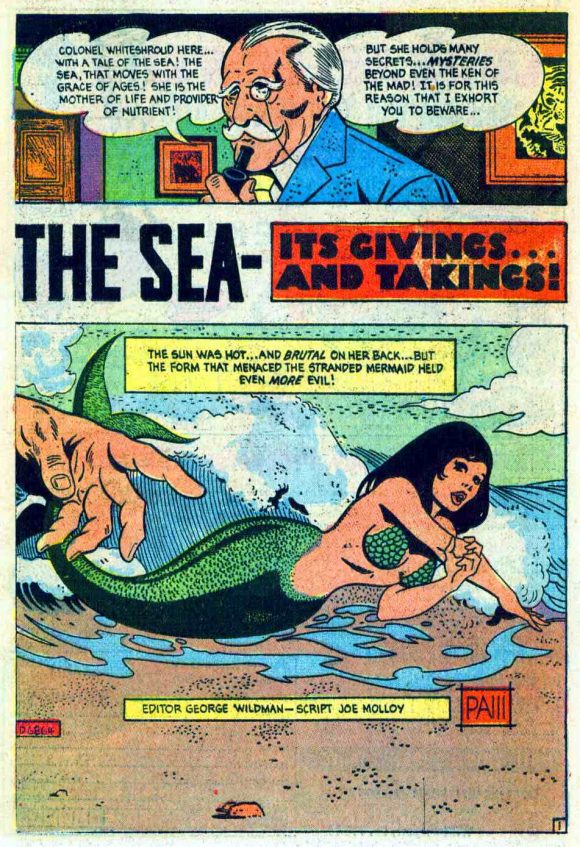 While Morisi had a distinct style of his own (check out Forbidden Tales of Dark Mansion #11, below), he was known to fall back on his Tuska swipes (the merman’s profile in Panel 3 is classic Tuska)… as well as his Alex Raymond files (there’s a lot of Dr. Zarkov in the human protagonist). But, as Wally Wood was known to say, “Don’t draw when you can swipe. Don’t swipe when you can trace. Don’t trace when you can paste-up.” 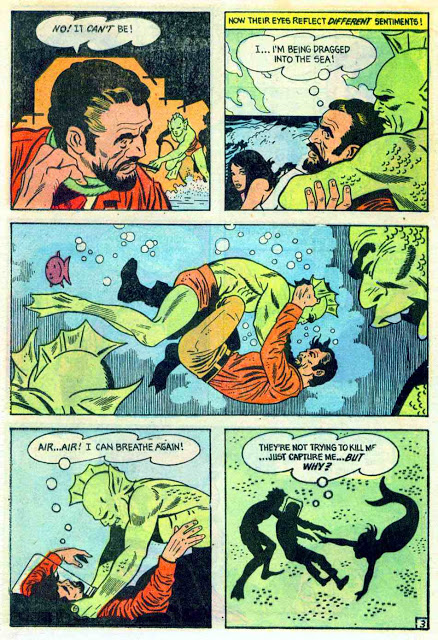 8. Ghostly Haunts #24 (Charlton Comics, April 1972). “The Fourth Guest” is an 8-pager that demonstrates Pete in full old pro/low page rate efficiency. In it, he tells this spooky story in medium shots and close-ups, with a single full figure shot on page 6. Backgrounds are minimal or non-existent and, while he foregoes silhouettes here, he makes ample use of blacks to fill space and pop figures. 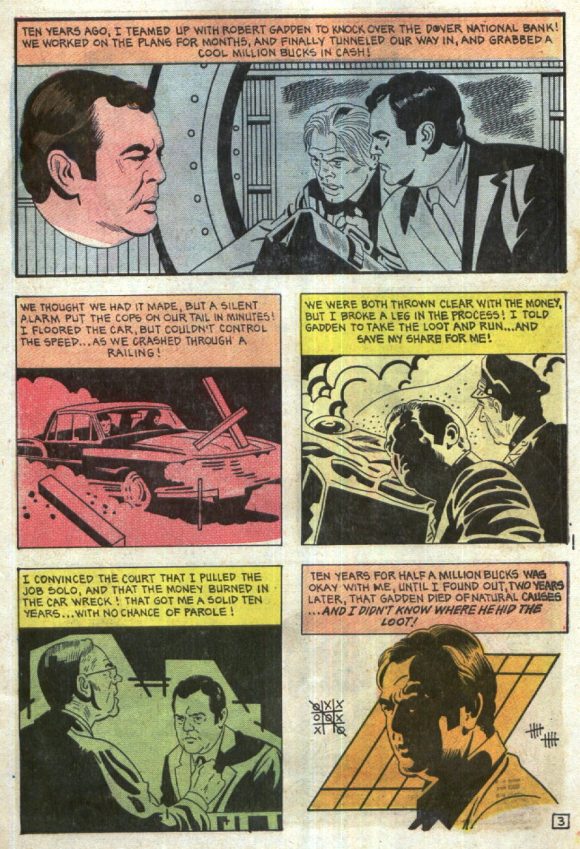 But none of these shortcuts distracted from the story or, more importantly, the storytelling. Like a lot of experienced professionals, he knew just how much he could leave out before the reader noticed or it started to hurt the story. 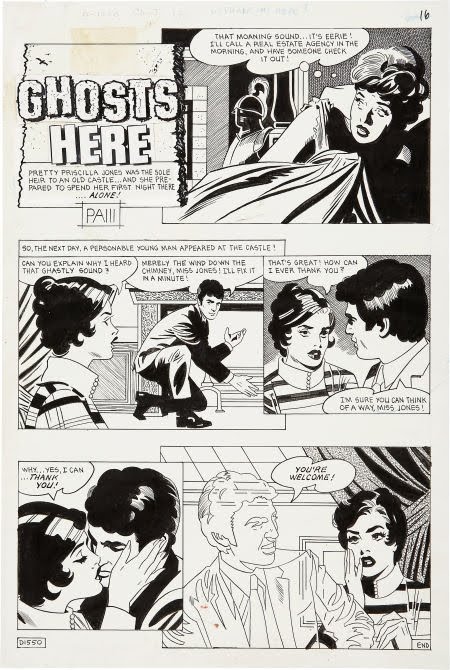 10. My Story True Romances in Pictures #11 (Fox, May 1950). I haven’t mentioned romance comics yet, but Morisi did those too. “Phony Love Affair” is the first of three stories I’ve picked that also show the evolution of the artist’s style, starting with some more or less generic “Golden Age” art out of the Mike Pepe/Carmine Infantino school. 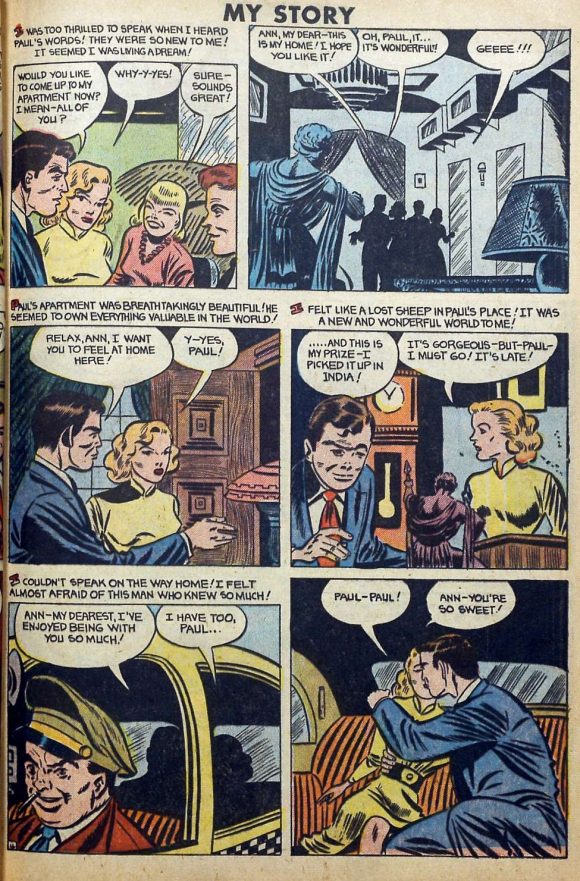 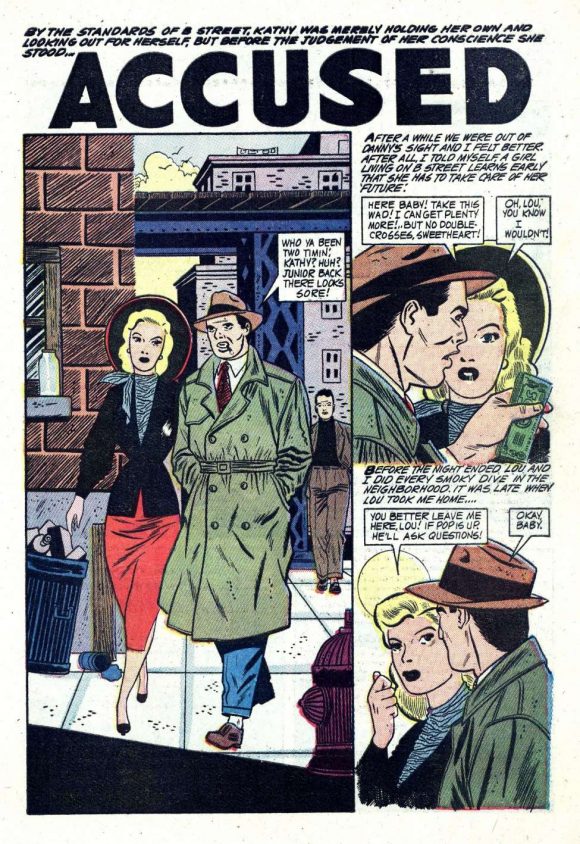 Pete obviously took the wraps off on “Bum Wrap”; it was, as far as I can determine, the only story he ever did for DC Comics (not counting the “Secret Origin of Peter Cannon, Thunderbolt” story he drew in the late-1980s that didn’t see publication until 2012’s Peter Cannon series from Dynamite). I can’t help but wonder if he didn’t see it as an audition piece for editor Joe Orlando in pursuit of future work at the company…? 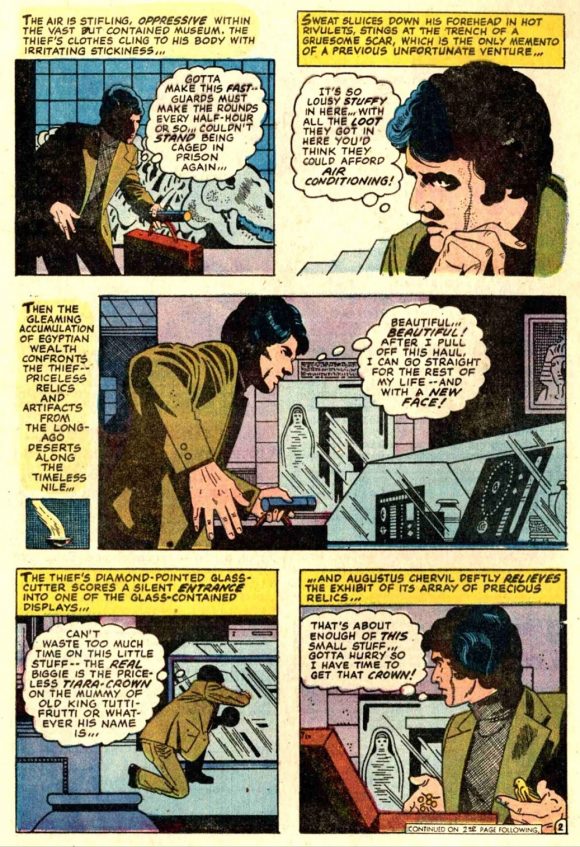 13. Davy Crockett #5 (Charlton Comics, March 1956). To end this birthday tribute to Pete Morisi, we head out West to the wild frontier for “Apache,” done right around the time he joined the NYPD. Pete’s work continued to appear regularly in Marvel and Charlton comics over the next couple of years, but eventually tapered off to nothing for more than five years until he returned with Peter Cannon, then disappeared again until the early- to mid-70s, coming back with a handful of stories. 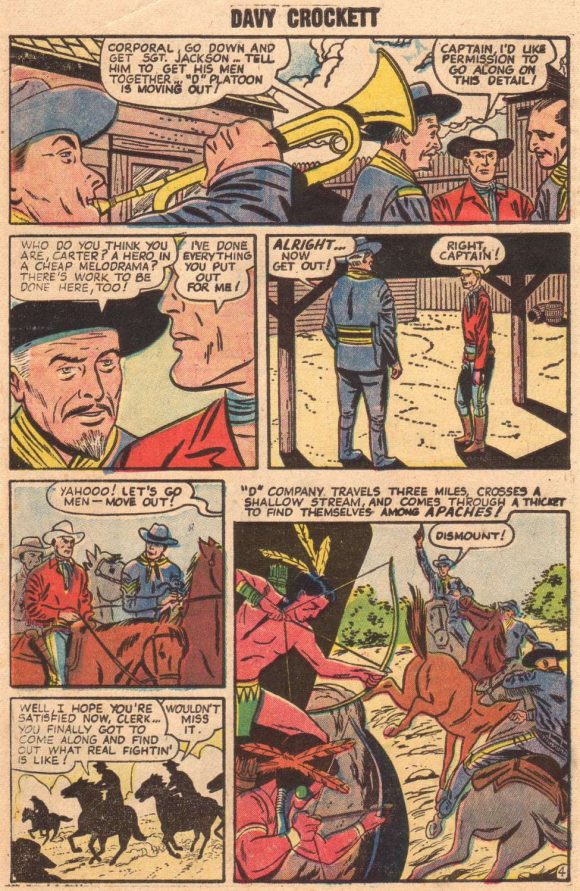 As his 1980s “Secret Origin of Peter Cannon, Thunderbolt” proved, Pete hadn’t lost any of his chops in the interim. If anything, he’d gotten even tighter and slicker. But while he was no longer doing comic books, Morisi never completely laid down his pencil; after retiring from the NYPD, he contributed illustrations to his hometown newspaper, the Staten Island Advance.