An appropriate inversion of a classic cover.

It’s NEAL ADAMS MONTH here at 13th Dimension, and we’re featuring daily commentary by Adams on his variant-cover project for DC Comics. Each of his 27 variants is a twist on one of his famous covers from the past. He provided the pencils, and the inks and colors were handled by some of the biggest names in the business like Dave Gibbons and Terry Dodson.

Our previous installment featured Superman #49, which was based on Limited Collector’s Edition C-25. (Click here.) 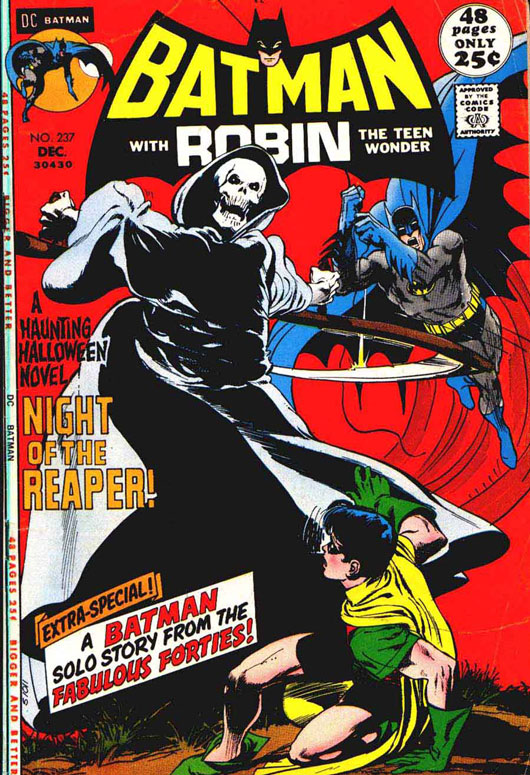 I’ve mentioned many times over (including when I first interviewed Neal Adams a few years back), how the cover to Batman #237 was a shock to Young Dan’s system. This one I remember seeing on the spinner rack as a small child and it was one of those moments that shook the comics fan in me into being.

It’s a brilliant, bold cover and the issue as a whole is the Greatest Halloween Comic Book Ever, written by Denny O’Neil.

With decades gone by, this is a perfect inversion of the script. Instead of Batman swinging into rescue a teen Robin, you have an adult Grayson coming to rescue his mentor … 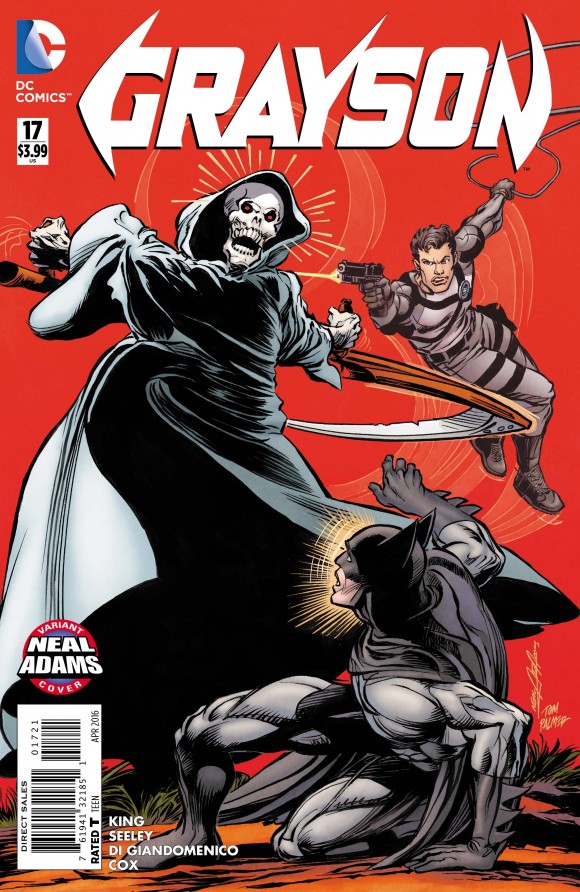 Dan Greenfield: Another favorite of mine. My all-time favorite Halloween story.

Neal: Well, to me, this is us jumping out of comic books into something a little bit more solid. This story turned out to be very solid story. It had to do with the yin and yang of the Holocaust.

The cover was very hard to come up with, I can tell you that: To treat the characters equally, to imply that there’s something going on, that this mysterious character is going to be significant to your reading of the story… and keeping these elements separate and creating that mystery. Because clearly that’s a villain. But he’s not a villain. 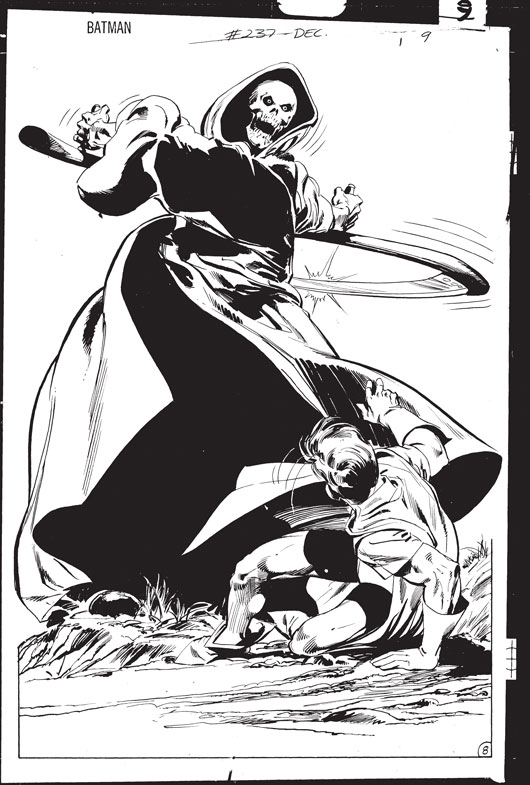 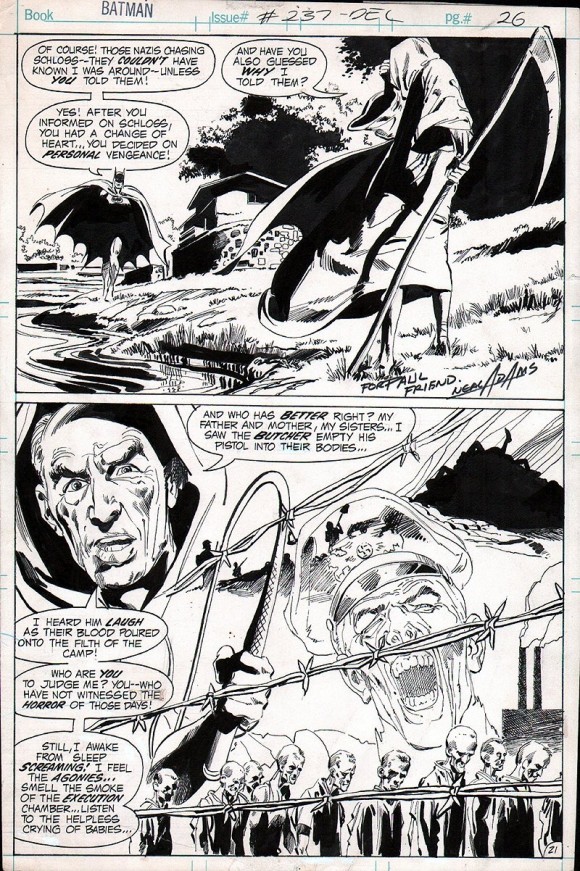 That can’t be translated into a new cover, so all it is now (for Grayson) is an action cover. So, we’ve lost the significance of it and basically all we’re doing is a modern version of a Neal Adams cover. But you know what? That’s OK. From my point of view, it’s a good exercise and a good composition, makes a lot of sense. It’s enjoyable. 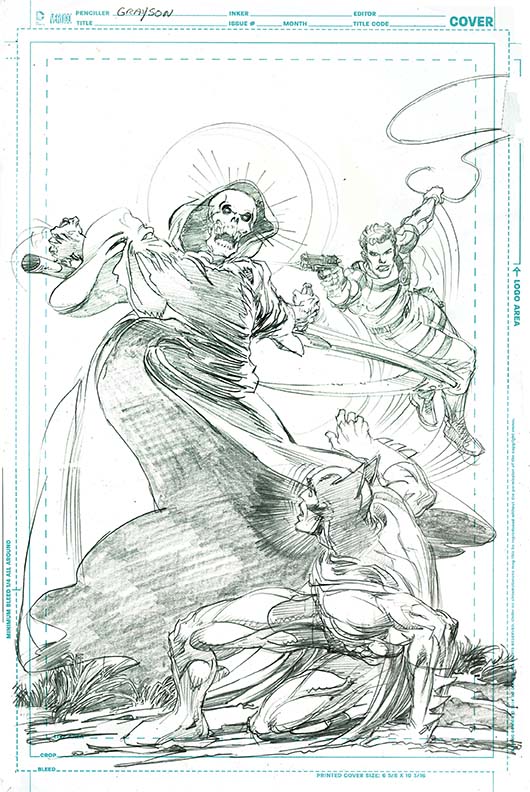 It’s sort of like, um…I don’t know. If there’s an artist out there, here’s an opportunity to ink a Neal Adams cover that nobody ever has before. Have a good time. And is there any meaning to (the modern one)? Absolutely none. No meaning. It’s just an artist’s exercise.

Now this is probably not intentional by you but … what’s great about (the Grayson) cover is that it really does tell you the difference between Batman and Robin or Bruce Wayne and Dick Grayson in terms of aging. Where Robin is the victim in the first one, Batman’s the victim in the second one. I know it’s an obvious, easy thing to do but Robin—or Dick Grayson now—IS really capable of this type of heroism, whereas before he was often, you know, Robin, the boy hostage.

Now that’s Tom Palmer who did the inking there. 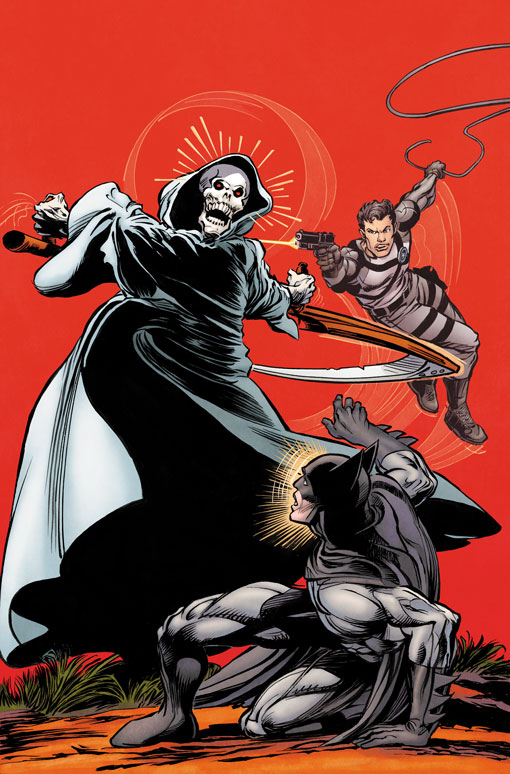 Neal: Who was my inker at Marvel, when I did the X-Men. I think that special dispensation was given so that Tom could ink one of these things.

If you were to ask me, should Tom Palmer ink one of these things, my answer would be, “Of course!”

He’s my inker at Marvel. Let’s do it again!

PLUS: Check out what Palmer has to say, here.