In its way, this is the most moving cover of NEAL ADAMS MONTH.

It’s NEAL ADAMS MONTH here at 13th Dimension, and we’re featuring daily commentary by Adams on his variant-cover project for DC Comics. Each of his 27 variants is a twist on one of his famous covers from the past. He provided the pencils, and the inks and colors were handled by some of the biggest names in the business like Bill Sienkiewicz and Dave Gibbons.

Our previous installment featured Grayson #17, which was based on Batman #237. Click here. 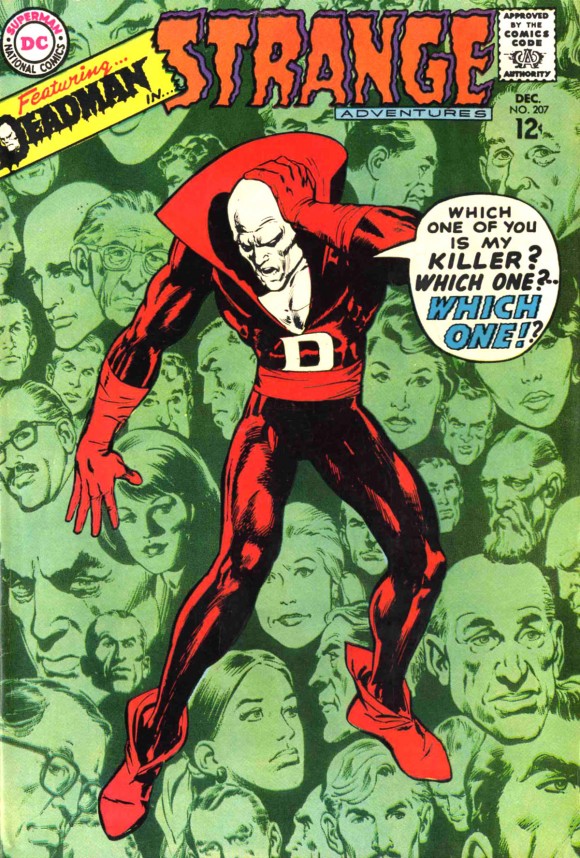 The original cover is perhaps Adams’ best known — and certainly one of his most highly regarded — Deadman covers.

To put it into perspective take a look at two other covers DC put out in October 1967: 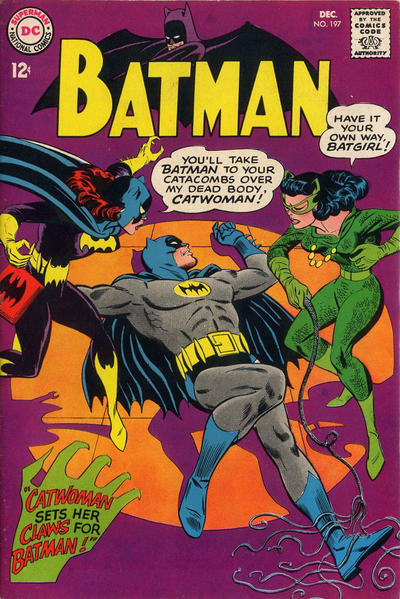 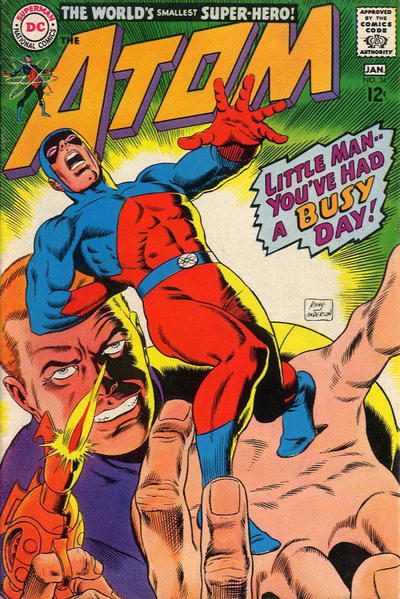 I am an enormous fan of legends Carmine Infantino (Batman, inked here by Mike Esposito) and Gil Kane (The Atom, inked here by Murphy Anderson). They are giants in the industry.

But what Adams did on his cover — the utter range of looks and likenesses — is extraordinary. And it was his first Deadman cover.

Strange Adventures #207 puts into sharp relief Adams’ uncanny ability to capture the way people actually are. Some of those faces were real (or at least known to him) while others were random.

So Adams took the opportunity with Deathstroke #15 to pay homage to other people who have made DC great for decades, particularly in the Silver and Bronze Ages. (The background isn’t inked by a guest star, by the way. They’re Adams’ original pencils.)

How many can you name? Adams’ comments — and the answers — are below: 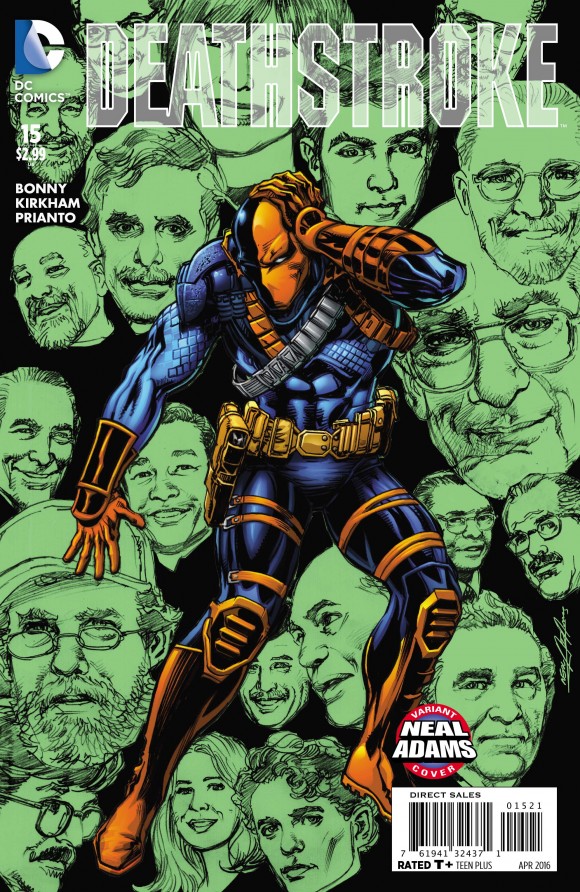 Neal Adams: When I did this Strange Adventures cover, I started to put faces in and then I realized, why don’t I put real people in, so I just started to do that in many cases. In some cases I just made up faces because, again, (I was paid) $50 a cover (and had to keep moving).

Over here, the modern one, I thought, why don’t I do real people in this one? Take it one step beyond. But I didn’t wanna make it blatant so I did a shot of Joe Orlando there as a young man. So, different people at different ages, not necessarily the same people. There’s a lot of people in there you’ll recognize.

Dan Greenfield: Yeah, I recognize Jenette Kahn, Marv Wolfman, Joe Kubert, Julie Schwartz, of course… I haven’t had a chance to really look at all of ’em. I figured that that was Len Wein. Dan DiDio I noticed. Bob Haney. You have Jack Adler over there. Dick Giordano I recognize.

Dan: Len Wein I knew because he always wears the ball cap.

Kris: Right. But most people got lost. 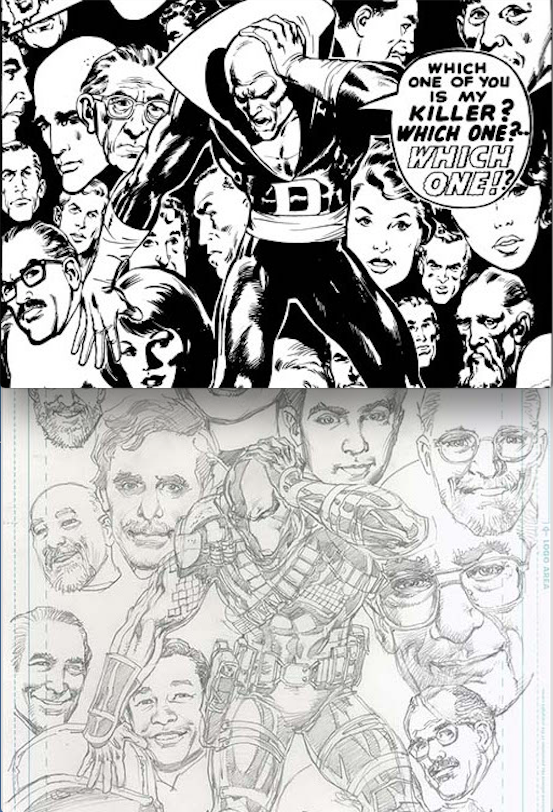 Dan: And Denny O’Neil I recognized.

Dan: No, I knew that that was Kubert. I met Joe Kubert once in my very failed attempt to become an artist in high school. I grew up in New Jersey so I went to the Kubert School on weekends and found out very quickly I had no aptitude for it whatsoever. But the one thing he did teach me was about ears relative to the rest of the face and also how to draw a really good eye. To this day, I know how to draw an eye very well. That’s all I have. 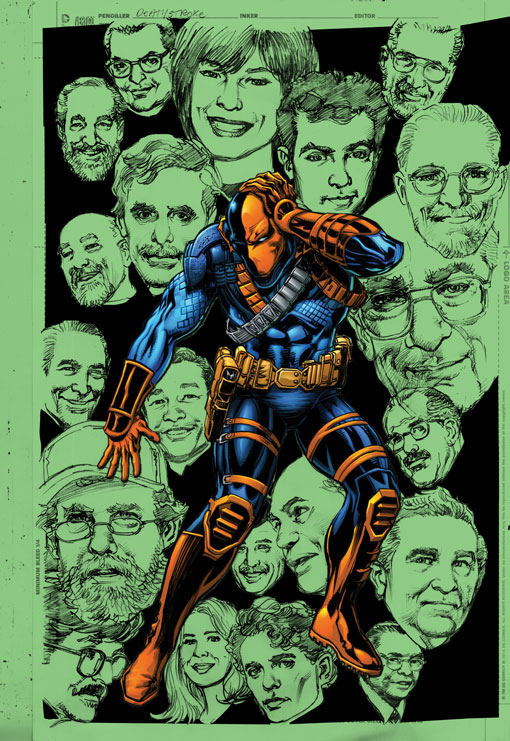