The academic publisher’s in the final stretch for his own Martian Comics.

Sequart’s Julian Darius is working on funding his own comic — a labor of love called Martian Comics. We’re gonna jump right into a Q&A but check out his Kickstarter pitch here (there’s less than a day to go). From the official description: “This is the story of Izzy Montoya. An undergrad who lives with in a sci-fi world of smart phones and flat screens, yet feels bored and directionless. She has visions of a very different world: a utopian paradise of technological marvels and personal freedom. This other life is so strange, it might as well be Mars. In fact, that’s exactly what she thinks it is. In this other life, Izzy is a four-armed, blue alien being, surrounded by wonder… yet who feels as bored and directionless as Izzy on Earth.” 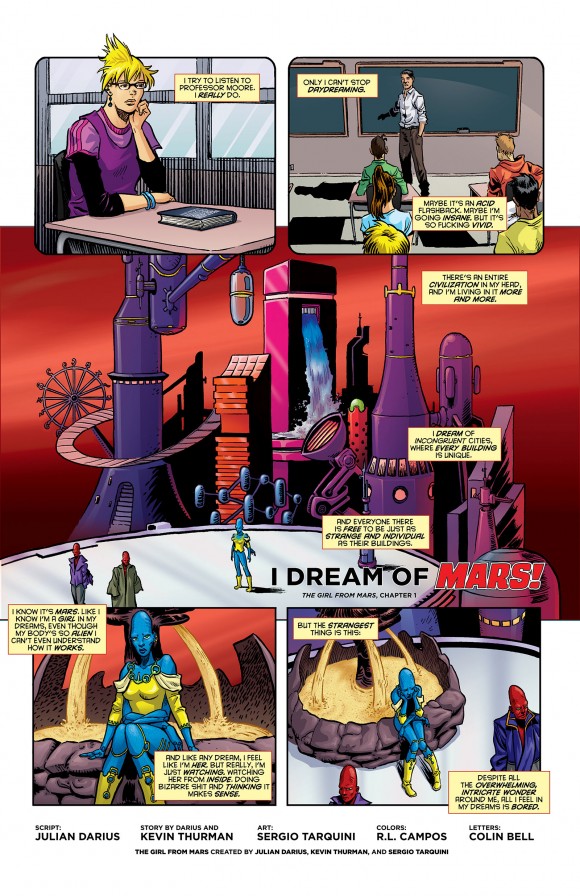 I had these visions of Mars one day, and then I knew what I had to do…

Long story not-so-short, I was a smart but disaffected kid who liked comics and then stumbled upon Mike Baron and Jackson Guice’s Flash #1 at the local Midwestern drug store. I had no idea what Crisis on Infinite Earths was. But this was a more mature comic than I’d ever seen before. I reread it a million times. I was already writing, but I fell in love with comics then. Within a year or so, I’d read Dark Knight and Watchmen and was moving on to stuff like Nexus.

My father was a film professor, and when he was a kid, movies weren’t considered art. His parents died when he was young, and he would go to movie theaters. Back then, you could stay in the theater and watch the movie again, and he’d watch the same movie all day. Escaping his life, yes, but also studying this medium. He went on to teach film and work with academic organizations advancing it. That was his medium. Although I read an awful lot of prose and grew up with him teaching me movies, I felt like comics were my medium. And it wasn’t respected either.

Fast forward to college, and I’m deciding I’ll be an English major — in significant part because of my love of comics, which I felt had so much more energy than what was going on in novels. My professors thought comics were a joke, basically, so I started writing about them online. This became Sequart Organization. Meanwhile, I was writing all these comics scripts, going back to high school, but the economics were so prohibitive. Today, I’m trying to make that unrealized segment of my entire life into something real, and the technology’s finally there to make this possible. 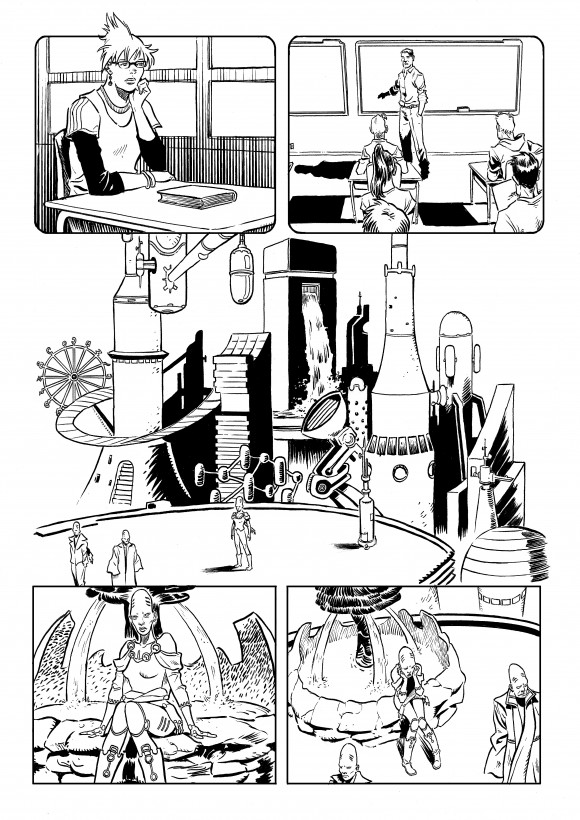 How did this project come about?

My buddy — and Sequart collaborator — Kevin Thurman was working on an idea for a comics series called The Ontologist. It was sci-fi with philosophical themes. Real ambitious stuff. But Kevin’s a perfectionist, and he kept revising it. I’d consult, informally.

One day, he told me he’d re-envisioned the whole thing, and to my surprise it was now grafted onto my own Martian mythology, which I’d made up for Martian Lit, my publishing business — basically, the creative counterpart to Sequart. I felt like I was invested now, and I loved working with a friend like this. We collaborated more formally, and it turned into The Girl from Mars. We did some scripts, and then I wrote an outline of the whole story.

By then, I was already envisioning these back-stories, exploring that Martian mythology, which I realized was more than a backstory to The Girl from Mars. It was a platform, a whole counter-history weaving throughout human history, letting me comment on all these big ideas and set stories whenever (and wherever) I wanted. It was turning into a real mythology, and my brain couldn’t stop thinking of these cool story possibilities. At this point, The Girl from Mars became the lead story in Martian Comics — an umbrella title that could explore this mythology and sort of be an American, one-universe, Vertigo-style version of 2000AD.

In that sense, I feel like I took the ball and ran with it. But I wouldn’t be doing this without Kevin, who’s been so tremendously supportive and who has so many great, philosophical ideas that he doesn’t know what to do with them! He’s a great guy. I’m not a super collaborative type — I’m more a solitary writer. But I could write with Kevin forever, because the second I hear his wild philosophical idea, my brain just starts weaving this story around it. Then he comes back and brilliantly sees a whole other layer or theme to this story that I didn’t, and this translates into my brain as all these new story possibilities. This is a simplification, of course, but he and I can go back and forth like this — if we don’t wind up talking about ancient Greek drama or super-hero universes or postmodern malaise. I think it’s a great collaboration, and Kevin’s awesome.

As is the incomparable Darick Robertson, who did our first cover and who’s been so supportive. The guy’s in the pantheon of great comics creators.

Our artist, Sergio Tarquini; our colorist, R.L. Campos; and our letterer, Colin Bell — all three of them have been simply great. They’re crazy talented, and they make what Kevin and I wrote look so much better. I’ve learned so much working with them that it’s ruined me for reading comics. I see so many better ways to lay out panels or do expressions, or to color without being either dull or obtrusive, or to letter clearly in a way that enhances the story. They deserve immense credit. They not only brought this story to life but made it real and intricate and interesting in completely unexpected but productive and fascinating ways, and I love them for it. 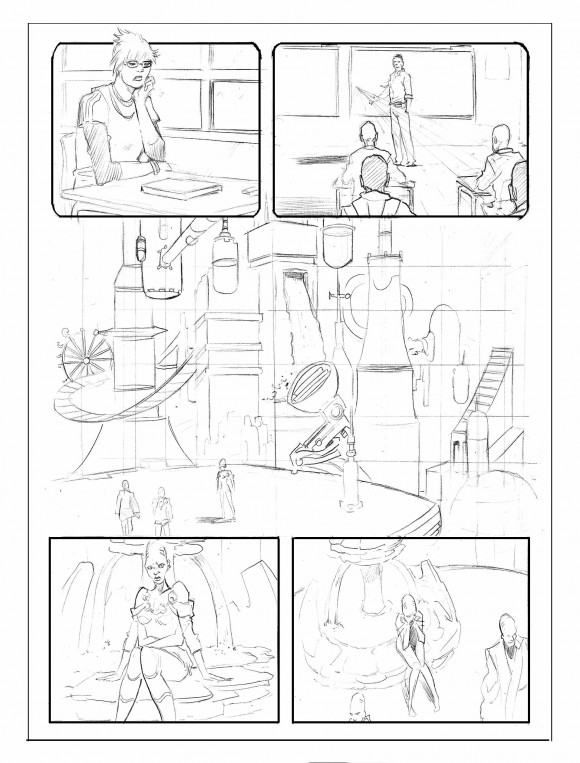 Why the Kickstarter route?

Because I’m not rich.

I feel guilty about that — and not only due to a kind of American blame-yourself-for-being-poor ethos. I wish I could wave a wand and pay for any amount of art or printing or marketing I think is warranted. I feel like my collaborators — and the writers working for Sequart — deserve it. That’s where I’m coming from. With both Sequart and Martian Lit, I like having the power to do my own thing and write what I want to write, and that’s important to me as a creator, so I try to make sure other writers feel the same sense of empowerment. But I really like having the power to say “This is a good book, and we’re gonna make it a reality.” That’s what it’s all about: being able to make cool things that should exist in the world actually happen.

But money’s tight. And while I may have a doctorate, I live with my parents to do this stuff. (God, they are tolerant and supportive!) I’m so far below the poverty line, it’s not even funny. I think I made $800 last year. I’m not complaining; I’ve got a great life, and I’m insanely fortunate, and I’m doing what I want to be doing. But everything goes into Sequart and Martian Lit. And I’d always rather invest in these awesome things I believe in, rather than make more money personally. I’m not saying this is noble; it’s quite possibly the height of self-indulgence. But I think when you’re building organizations and businesses from scratch, trying to make awesome things happen without a lot of resources, this is what you gotta do if you don’t have a trust fund.

That’s where Kickstarter comes in. It lets you put your idea out there and lets a large group of amazingly kind people chip in to make it a reality. It’s a game-changer, because it empowers people like us, who don’t have money or power, have a fighting chance. No, it’s not a level playing field; a huge part of what makes a Kickstarter successful is extensive marketing, and brand names or established creators help too.

But in business, everything is cash flow, and most projects have huge start-up costs and huge one-time costs, like printing. Kickstarter lets you get over these humps. That’s its function. It can also have the side effect of building awareness of what you’re doing, but the prime function of Kickstarter is to let small guys without other options get past these one-time financial hurdles, without which a project wouldn’t be possible. And it lets you keep the rights, which isn’t the case if you find venture capital or something — if an investor were even willing to bother with a few thousand dollars.

So that’s why we’re on Kickstarter, and although we’re struggling to meet our goal, the support has been amazing. Every time someone pledges anything at all, I’m just amazed someone cared enough or wanted this to be a reality enough that they put their hard-earned dollars behind it. Someone might think that’s an ego-boosting experience, but it’s actually very humbling, to have someone do such a thing. It helps inspire us never to say “good enough.”