13th Dimension is teaming up with the free MOOC (Massive Open Online Course) MAKING COMICS to help you make the jump to comics creator.

The Making Comics Get A Grasp! MOOC has finally come to a close. After four weeks of intensive readings, industry insight, and group workshopping, students of the Making Comics course have emerged victorious and better equipped to handle the rigors of every-day comic-making life.

For the final week, students were tasked with shaping and recording a 3-5 minute video pitch and posting it to YouTube for all the world to see. The results were nothing short of amazing. From awesome video/image collages to intimate webcam heart-to-hearts, students flooded YouTube with their stories and entered an entirely new chapter in their comic-creation journey.

But before we dive into our favorite pitches, I’d be doing everyone a disservice if I didn’t first highlight the insanely informative YouTube panel that took place as well. 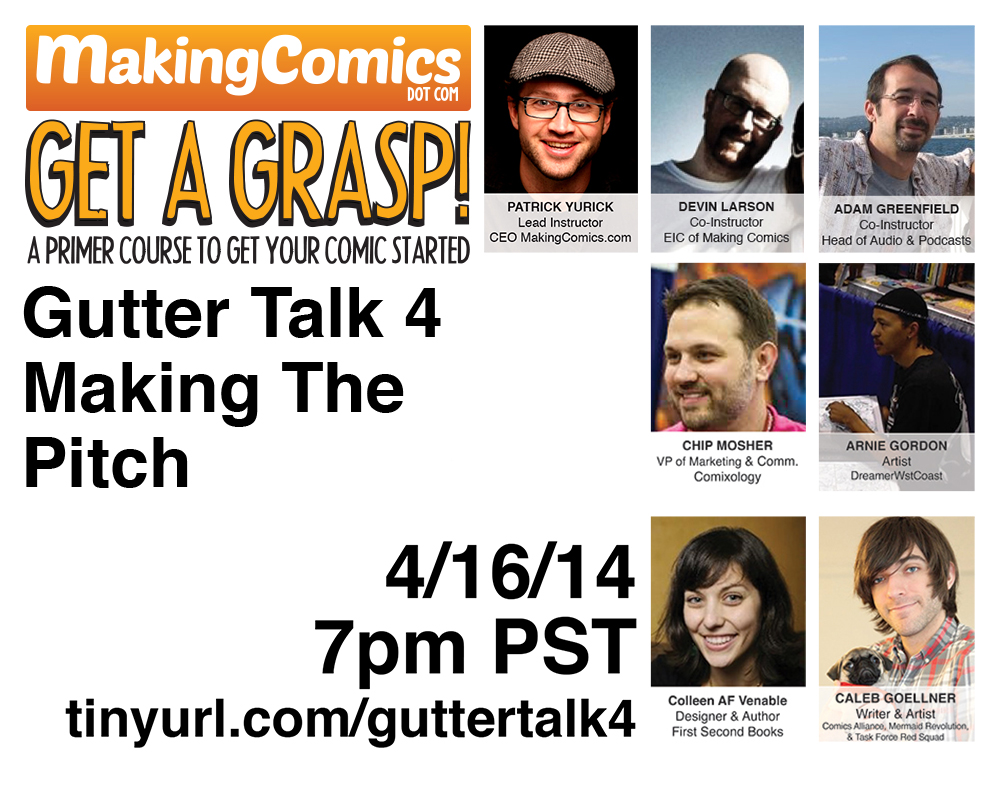 Gathered around their fuzzy webcams and equipped with invaluable industry knowledge were Chip Mosher, Arnie Gordon, Colleen AF Venable, Caleb Goellner, and Carol Burrell, with host Patrick Yurick, all ready to talk about the terrifying, nail-biting, and, more often than not, confusing world of publishing! Here are some of the highlighted tweets from the panel:

"Figure out who edits and represents the books you love. Follow the trail." –@colleenaf #GetAGrasp

Colleen AF Venable on finding agents for your work.

Chip Mosher on tailoring your pitches for each and every submission.

"When it comes to doubt, just lie to yourself completely. Tell yourself that it's the best thing out there." –@calebandrew #GetAGrasp

"Create a script for yourself to memorize about your comic when you speak to people." -@theheadcomic mentioning @ChrisOatley #GetAGrasp

And that’s only the stuff I had the time to type down! To really dive headfirst into the deep pool of comic publishing, check out the panel in the video below:

Fueled by the upbeat hope that springs from having fears dispelled, the MOOC students propelled themselves into their pitches with a renewed vigor. By the end of the week, pitches were being recorded, critiqued by friends in their MCMOOC Google Communities, and reworked for even more dramatic results. Needless to say, by the course’s finale, the instructors and I were blown away by the abundant amounts of creativity and passion felt by everyone in the community.

I sent out an APB to all of the industry folks who had appeared on our Get A Grasp! Guttertalk panels over the past four weeks, asking them to pick a pitch and give them a solid critique. Because growing a thick skin in this industry is an absolute must, I made sure to let the pros know that they shouldn’t hold anything back.

We’ll be running those pitches — and the critiques — over the next several days here at 13th Dimension.

So brace yourselves, everyone! You’re stepping into the deep end of the pool now!

But just because the course is over, it doesn’t mean that it all ends here. The Google Community created for the MCMOOC is still up and active. In fact, people are still posting updates about their comic projects on those boards. Also, Making Comics has begun a new community-driven project. Titled “The Making Comics Daily Mini-Challenge,” the project aims to bring artists and writers together through daily artistic challenges that encourage practice and creative-juice flow!

If you’re interested in joining the community of Mini-Challengers, click here and sign up for our daily emails. And be sure to keep on visiting Making Comics (dotCom) for constant, new resources, and 13th Dimension for awesome comic book news and commentary!