13th Dimension teams up with another free MOOC (Massive Open Online Course) to enrich the comics experience! This week from MAKING COMICS: The Elevator Pitch.

Each week, Kevin Cullen from Making Comics’ Get a Grasp! MOOC will be highlighting the previous week’s work — complete with advice from industry vets and highlights of students’ work!

Last Sunday, the Making Comics Dot Com MOOC launched in spectacular fashion. All week long, students were filling the Google Community (as well as Twitter) with elevator pitches, reflections on the assigned readings, and initial story outlines. They shared their ideas — many of which were utterly brilliant — with their peers and course coaches so that they, as one explosive community, could aid each other in the refinement of their stories’ concepts. It was an awesome opportunity to reach out to other artists, many of whom are in the same boat in terms of experience in the comic book industry, and plenty of friendships were forged out of these workshopping efforts. 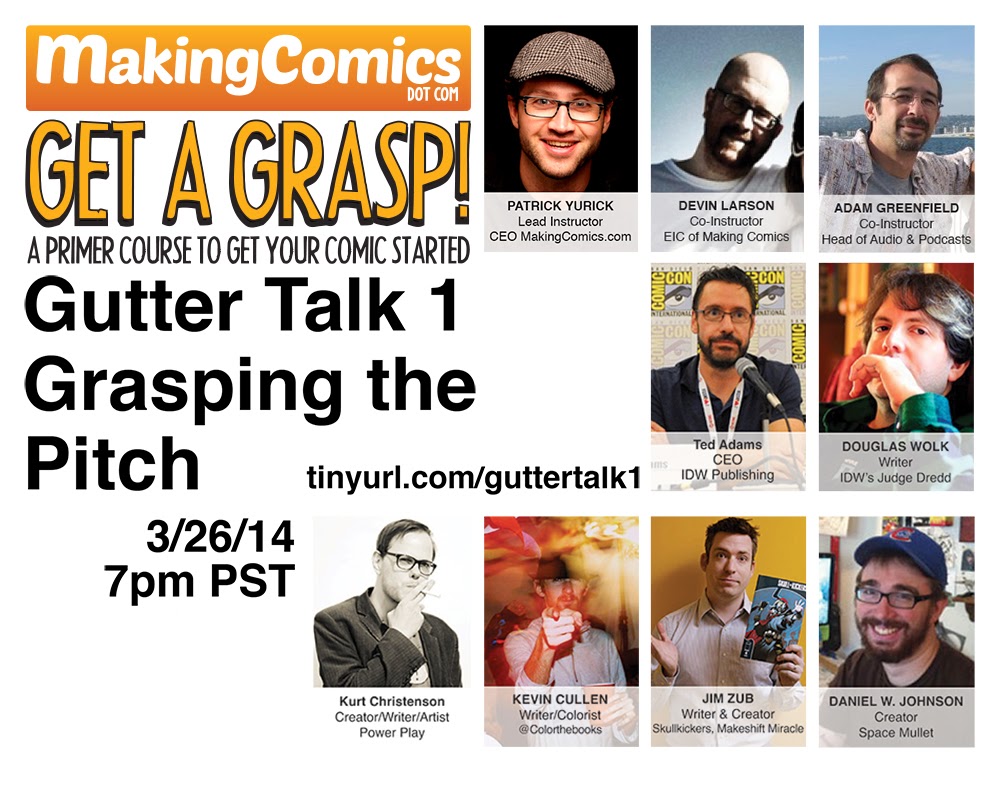 When Wednesday rolled around, students gathered around their computers and tuned in to the Making Comics Gutter Talk, where Patrick met with industry professionals Jim Zub, Ted Adams, Douglas Wolk, Kurt Christenson, and Daniel Warren Johnson to discuss the idea of the “pitch” and its importance in every foundational aspect of comic making.

From providing the backbone of the story’s concepts to pushing you further out into the market, this melting pot of minds discussed the different key aspects of the pitch as well as offering tidbits of advice on how to stay alive in the harshly competitive market of storytelling. I livetweeted the event, highlighting as quickly as I could some of the best lines of the night as they passed across the net:

"Pitchwriting is powerful because the heart of the story should be in that first sentence." -@theheadcomic on pitches #GetAGrasp

Patrick weighed in, diving straight into the heart of the discussion and opening the doors for enthusiastic responses.

"All the successful projects have something in common: the creators are doing what they love and they're doing it with quality"- @jimzub

Jim Zub dished out some realistic advice when he was asked about the surest way writers are able to break into the comic book industry.

"I listen to what people say, take their ideas, and them build on them and make them even more awesome!" @douglaswolk on writing #GetAGrasp

Douglas Wolk responding to where he finds his inspiration and where he draws his ideas from.

"Comic books is a relationship based business. It's not just about you handing me a piece of paper." – @therealtedadams #GetAGrasp

Ted Adams getting down into the nitty gritty of marketing and selling comic book pitches to publishers.

Those are but a few of the gems passed along during the Gutter Talk panel! If you’re looking for some passionate people talking about things that they love, check out the full panel below. It’s well worth a listen.

After the panel, I reached out to a few of the professionals (both on the panel that week as well as in the upcoming panels) and asked them for their bottom-line thoughts on the pitch and why, if an artist is looking to break into the world of professional comic books, a finely honed pitch is precisely what they need to cut through the competition. I also asked them about a few of the Twitter elevator pitches they’d seen and what they thought. 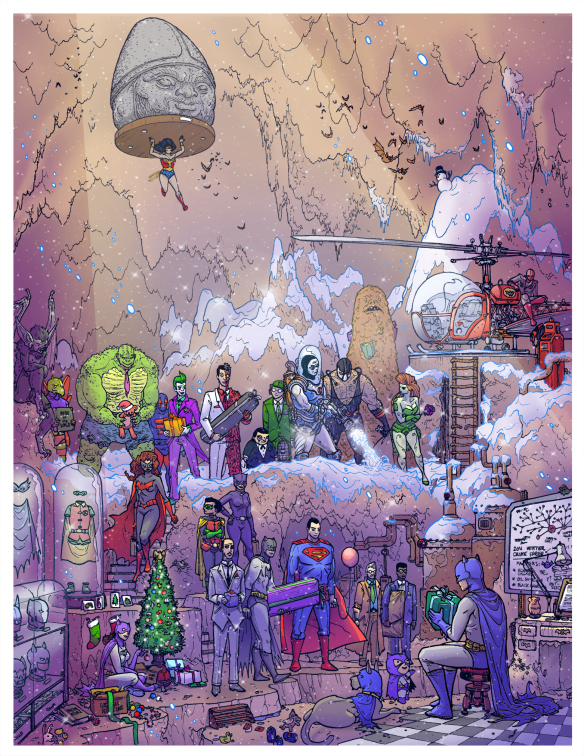 Ulises Farinas, artist of the current Judge Dredd comics, said, “How I look at it is that ideas are the easy part. Plot is the hard thing to find. Within a premise are a million conflicts and a million solutions, and a writer wants to find the story they want to tell — the most important story. Like an artist who doesn’t just draw a million lines to make a picture, he draws a million perfectly chosen lines. Some of the Twitter pitches already established that there’s a character, and that something is getting in their way. In high school, you learn the seven plots – it’s Man vs. Man, Man vs. Environment, etc. But there’s only one plot, and it’s “VERSUS.” What does a character want and what gets in their way, the way you solve that problem is your story!”

Kurt Christensen, from Power Play Comics, touched on pitches and networking: “For me, as a predominantly self-published creator, the initial pitch is there to lay groundwork for the final product and an overview to get the artist involved interested and show off all the cool stuff they’ll get to draw.

“I work pretty loose overall, allowing for the script to breathe as it were, compensation for surprises on the page, but the outline never changes that much. I personally need to know what it is I’m making, even if the process involves more improvisation.

“When I first started creating comics in 2001 I was told by a lot of creators to just do the leg work, go to the conventions, check out new up-and-comers, ask for advice from pros but be respectful of their time, be a friendly face in a sea of fans, crash the after-parties, hang out and talk shop, because everyone’s different in their process, but we’re all geeked-out comic fans. Make friends.

“Now that we have the internet, use it! Do something else as well, especially if you’re a writer. In 2009, I started the first Brooklyn Comics Podcast, I run several Tumblrs which I use to promote people, projects, and events I like. Use Twitter (I’m bad at that part), and make sure all your social media is linked together and keep consistently putting out content on a regular basis, no matter what it is. Articles, essays, reviews, vlog, podcast, etc. and then find others who are doing things you like and interact with them.

“Eventually you’ll find your community and that’s really the key beyond doing great work, surround yourself with good people and support one another.”

Other artists skipped the general advice giving and dove straight into the pitches themselves! Here are some of the pitches they liked and the thoughts they had about them:

An untested commander finds herself a target of a group of raiders, who are determined to make her first mission her last. #GetaGrasp #pitch

Eric Shanower, who works on Age of Bronze, had a few things to say about this pitch by Andrew Crisp: “This one does a good job defining the conflict that will drive the plot. But I think a few details would help. What is the context? Commander of what? A military organization? Is this real world or science fiction? Something like this might work better:

“An untested starship commander finds herself a target of a group of soul-sucking raiders from Betelgeuse, who are determined to make her first combat mission to Orion her last mission ever.

“I’m sure my details aren’t what the creator intends, but that’s an example of the level of specificity I’d like here.”

Daniel Warren Johnson, mastermind behind Space Mullet, also had some comments for this pitch: “I like this. I’d like a tiny bit more detail, as to what kind of setting it’s in. Something like ‘an untested mobile suit commander finds herself the target of a group of space raiders….etc.’ Adjectives are awesome for elevator pitches! Use ’em! Good luck to you!”

Eric Shanower also brought up Bianca Calvo’s elevator pitch: “This next one works well. It’s clear and leaves potential for conflict to drive the plot. It might be extended to characterize what the theme park is like when it comes to life. Is it joyous? Threatening? Confusing? Suggest something in a few words that defines the conflict between the girl finding her dog and how the theme park might prevent this. Maybe something like this:

“A young girl searches for her lost dog in an abandoned theme park that returns to bustling and brilliant life at night, so thick with frolicking crowds that she knows she’ll never see her dog again.

“That may be a little too dramatic, maybe a tad overloaded with adjectives, since this sounds like a smallish story, but it’s the intent, not my specific word choices that I want to get across here.”

Daniel Warren Johnson also had some solid advice for Bianca’s pitch: “This sounds awesome. Again, I’d love more adjectives! Small things that add texture and detail to the story/pitch. Something you could add here would be to say ‘What time period this takes place in. 1920’s cabaret or present day carnival?’ etc.”

Interested in the other pitches that the students have been throwing out into the world? Cruise on down to Twitter and search for these two hashtags at the same time: #GetAGrasp #Pitch (or you can just click those words right there).

And stay tuned for next week’s article here at 13th Dimension, where we’ll be learning about the ins and outs of world-building, highlighting more elevator pitches, and talking more with industry creators!