The best indie comic of the last couple of years has been AHOY Comics’ The Wrong Earth and its prequel Dragonfly & Dragonflyman.

Basically, writer Tom Peyer and artists Jamal Igle and Peter Krause, respectively, explore a mind-bending scenario: What if a Caped Crusader who lives in a DayGlo go-go universe switched places with a Dark Knight who inhabits a city where the sun never shines and the good guys are at times indistinguishable from the bad guys?

These are great books and Batnip to a fan like me, who appreciates both styles of storytelling and, naturally, great satire of the source material.

So we’re happy to join in AHOY’s Dragonflyman Day activities — because even though these characters haven’t been around for 80 years, in a thematic sense, they have.

I mean, don’t you remember the 1960s show starring Rock Sterling? Because this EXCLUSIVE INTERVIEW is something you’ll want to check out:

Heh. Those AHOY folks know how to have fun.

Seriously, though, why is today Dragonflyman Day? Because the new trade paperback of Dragonfly & Dragonflyman is out and if anyone knows how to subvert the Big Corporate Publisher concept of declaring a celebratory day for a fictional character that banks millions, it’s the merry pranksters at AHOY.

In that vein, we’ve got a bit of treat for you — an EXCLUSIVE FIRST LOOK at writer Jeff Parker’s intro to the collected edition, along with a couple pages. Parker and Peyer both wrote DC’s Batman ’66 comic, so if anyone knows of what they speak, it’s these gentlemen.

So dig this look at the cracked-mirror worlds of Earth-Alpha and Earth-Omega — and how they reflect not just the different versions of one of comics’ biggest heroes, but storytelling in general, and even, dare I say, the world around us. 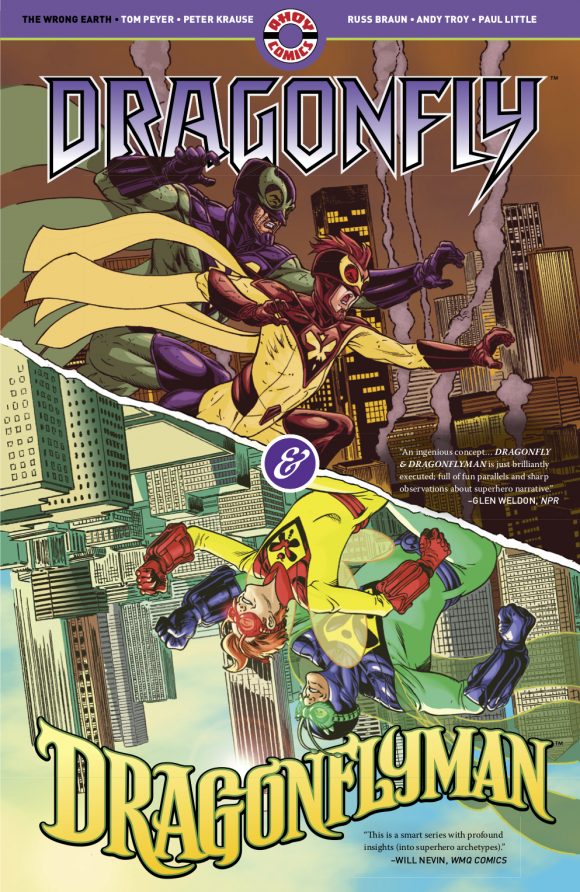 Earth-Alpha and Earth-Omega. These are the more than my personal nicknames for Tom Peyer and Peter Krause, they’re two polar approaches for creating superhero comics. The Alpha being the wacky fun-filled camp style of story where even the villains aren’t that bad, and the Omega is the seedy, gritty harsh worldview where the heroes are darker than the villains were in the Alpha. Comics fans have argued for years over which is the best way to tell these stories, and now Tom and Peter are posing the question like the little girl in the Internet memes: Why not both?

OK first, you should go back and read The Wrong Earth by Peyer and another heavy-hitting artist, Jamal Igle. You don’t need to have read it, but you’ll like it and it introduces us to Dragonfly and Dragonflyman. I was a real mark for the meta concept of heroes from two such worlds trading places, and I’ll admit, a little mad that I didn’t come up with it first.

Peyer and I were the main writers on Batman ’66, the series that finally brought the specific hero and world of the pop culture hit TV show to comics. One of my favorite things about Tom’s stories in it was how he’d embrace the “good citizen” spiels the heroes were prone to making and I love that Dragonflyman continues that. 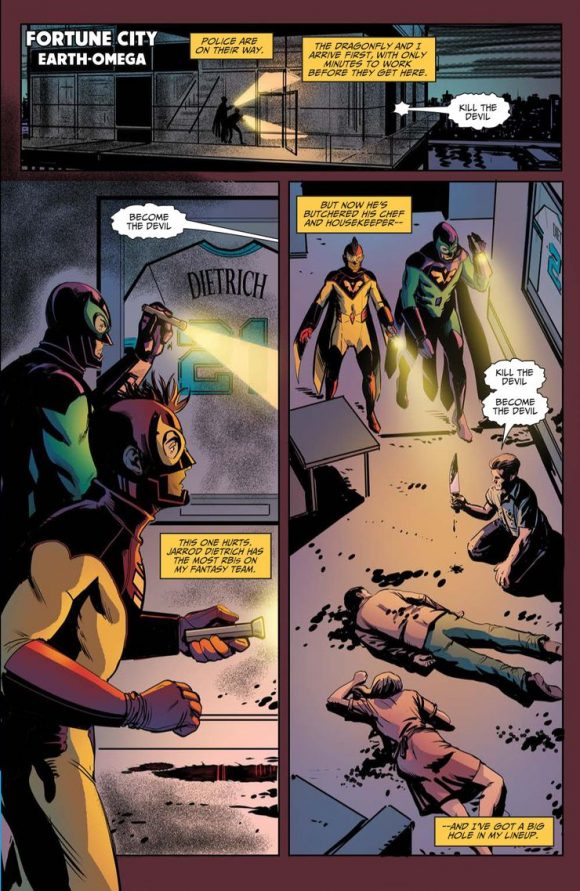 Wait, another Bat-digression: Another favorite Peyer ’66 bit was a scene where Bookworm realized that Robin had switched his hat radio because the speaker was too loud and his thorough ledger showed the batteries were replaced two months ago and should be weaker. It doesn’t matter how “realistic” the world of the book is shown, when the writer deep-dives into a character’s reality like that, it becomes real to the reader. The big word for it that will score points with your teachers is verisimilitude. And a mashed-up genre concept like this demands it.

You might be surprised if you mainly know Peyer’s work from Batman how naturally he conjures up the Omega world here. Conventional wisdom credits the dark side of super-comics largely originating with Alan Moore and Frank Miller’s seminal 1980s works like Watchmen and The Dark Knight Returns. As great as those were, a lot of what we got afterward inspired by them was diminishing returns. A lot of weak world-building that reveled in shoving the reader’s face in the ugliest scenarios possible.

What’s refreshing about Dragonfly’s world is that these creators have clearly gone outside and spent time in the real world, and let that inform Earth-Omega. The focus is heavy of course, but it’s not shocks and gross-outs for their own sake, it follows a consistent through line that we rarely ever got from the Watchmen wannabes. Likewise, Krause veers much more to the Hitchcock side of showing violence, giving your mind the chance to interpret the harshest notes of a scene without spelling it all out for you. 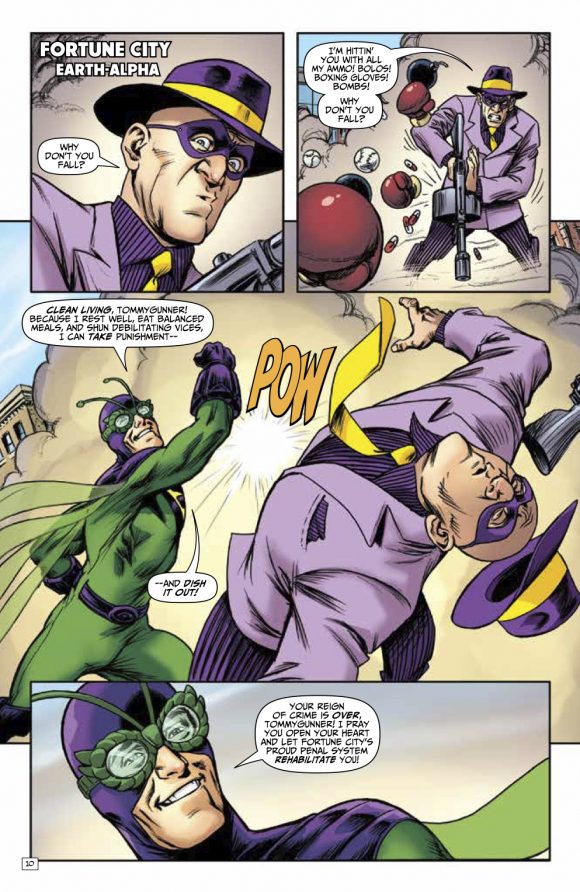 Here our real-life dynamic duo (PeyerMan and Kid Krause) start telling stories of two different worlds side by side. Except it’s really one story shown through two lenses, and that’s what’s really interesting here. We’re delving into bigger science fiction territory and exploring the idea of how alternate universes aren’t simply bizarro versions of each other where one character sports a goatee or eyepatch they don’t wear in the familiar version. Instead they’re more like musical numbers that play in different keys yet still follow the same progressions and themes.

Time to stop myself here or I’m going to be rambling on about “There’s a part in Issue #3 that will slay you!” and “Oh wow, does Stinger not know what’s coming up!” and instead finish my thoughts about the Alpha and Omega approach to comics. 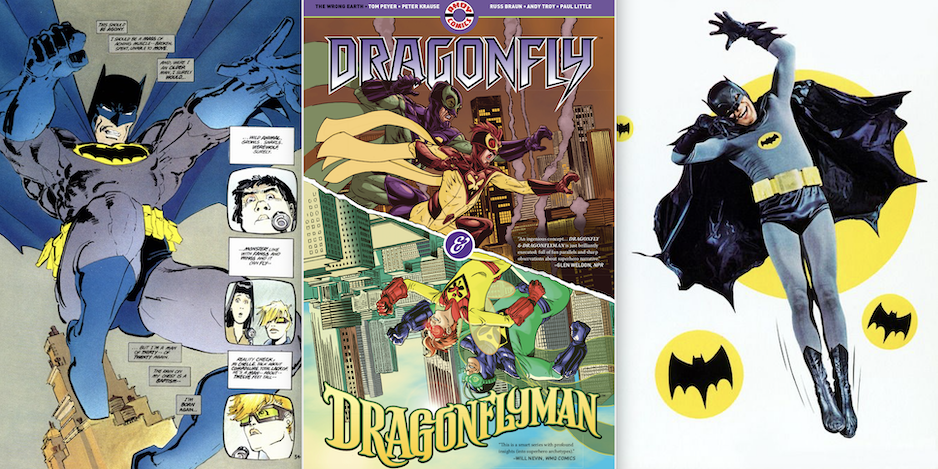 Extremes are defined by each other — sweet and sour, hot and cold, yin and yang — so it really shouldn’t be surprising how this book works. What I wonder about is how many readers who think they prefer one take will drift over into enjoying the other. I also could be way off, maybe Peyer means for one of the universes to be the focal point and the other the dream version. It seems like a job for an argumentative book club to tackle, or the top ornery contributors to Goodreads.

Better yet, form your own theory and storm up to Peyer and Krause at a comics convention sometime and give them a piece of your mind.

To the Dragon Wagon…

— The Comic Every BATMAN ’66 Fan Should Read. Click here.