EXCLUSIVE: Is she heroine or villainess? Either way, artist Jamal Igle can at least tell you how he did that nifty cover — and designed Fortune City’s Dominoed Daredoll… 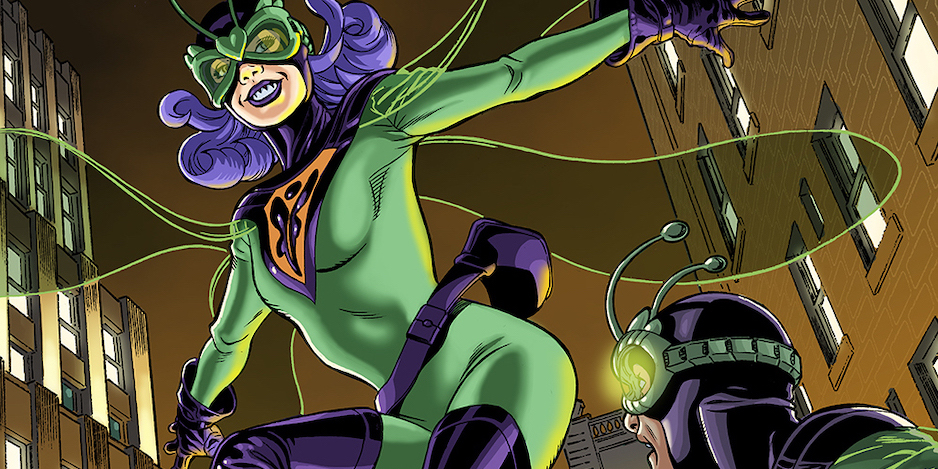 The essential Dragonfly & Dragonflyman #3, by Tom Peyer, Peter Krause and Andy Troy, is out from AHOY Comics on Wednesday, Jan. 8 — so it’s time for another EXCLUSIVE cover commentary by Jamal Igle.

Not only that, Jamal will show off his design for the issue’s big debut: Lady Dragonflyman — what is her startling secret identity?

(Side note: Best name ever for a superhero. Reminds me of when Providence College’s women’s teams were called the Lady Friars. Think about that for a second.) — Dan 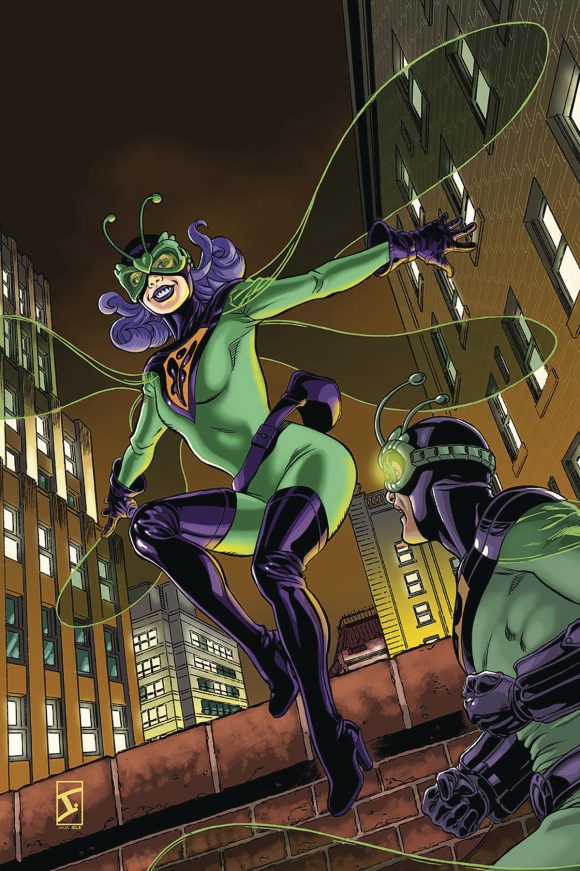 We’re introducing a brand new character into The Wrong Earth mythos. Since this is our first time meeting her, I needed to design her.

The idea really came from looking at another distaff heroine from comics history and figuring out how to create a familiar yet different version of our hero and how to introduce her. 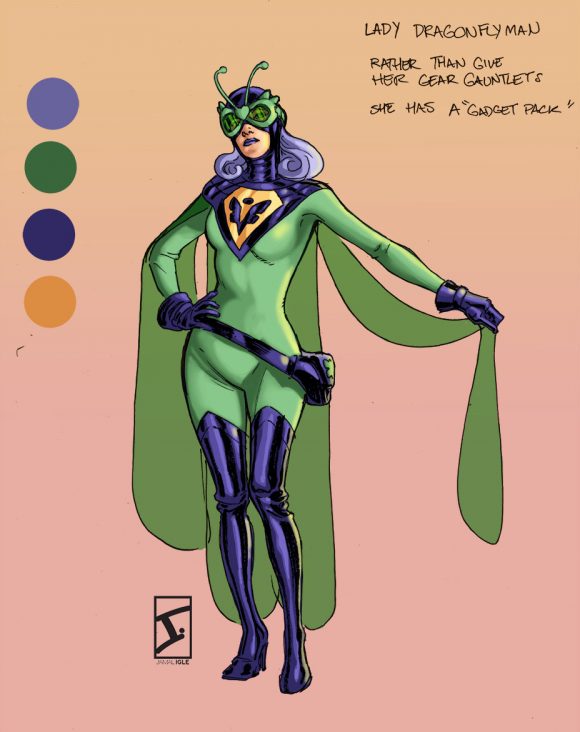 Usually, I spend a bit of time thinking of the cover and paring my ideas down to a single sketch before presenting it to Tom and our editor Deron Bennet. With this cover I submitted three versions because I couldn’t decide which worked best. 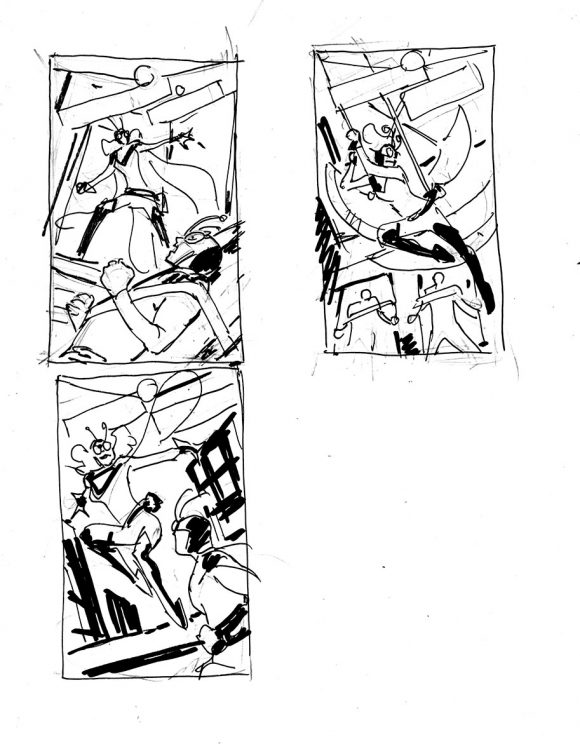 We all agreed the third sketch was the best and I went about designing her. 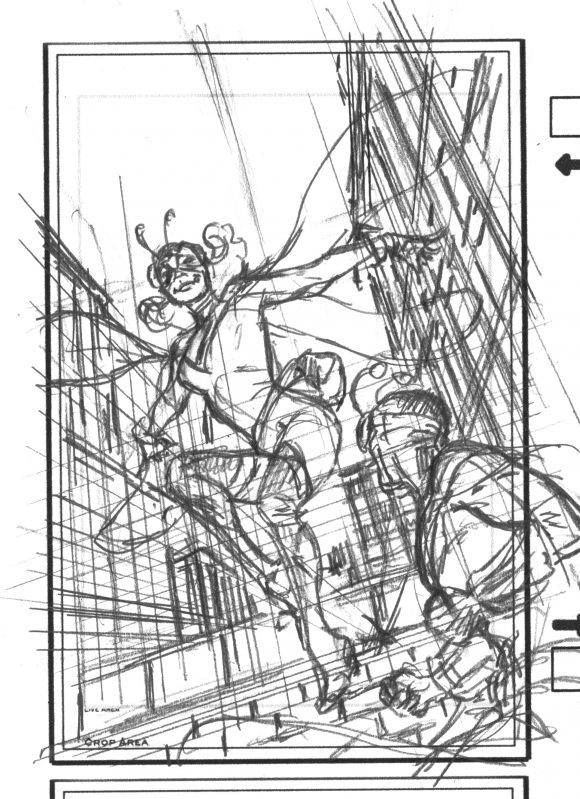 I wanted to ‘feminize” (for lack of a better term) the Dragonflyman costume. High heeled boots, purple hair coming from the base of her hood help in that regard. I also decided to add something that would separate her even more. LDFM’s goggles have a heart-shaped attachment holding her antennae, but lack the lights in her lenses that Dragonflyman and Stinger’s goggles have. 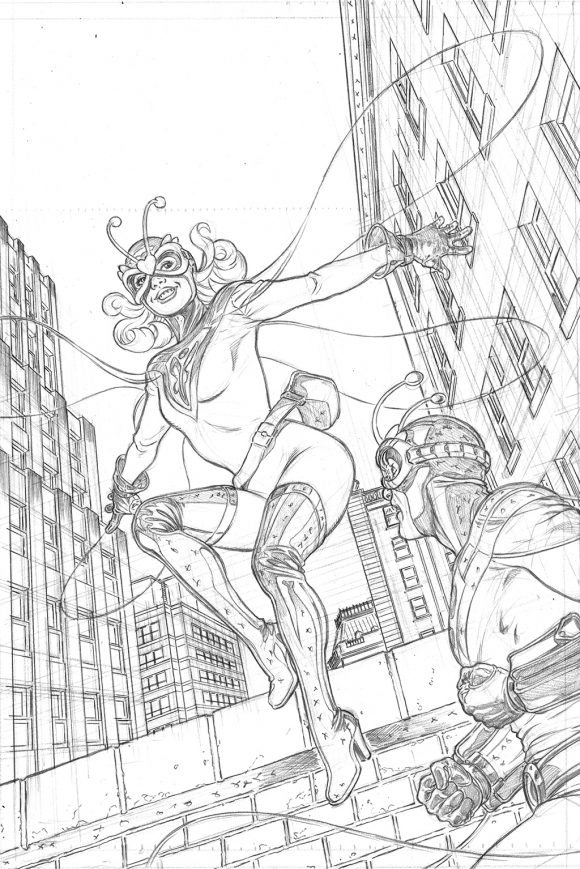 I also decided that she wouldn’t have the “Gear Gauntlets” the others have, taking a page from characters like Golden Age heroine Sun Girl, the original Kathy Kane Batwoman and initial Barbara Gordon Batgirl by giving her a purse — here, a fanny pack — to hold her gear. 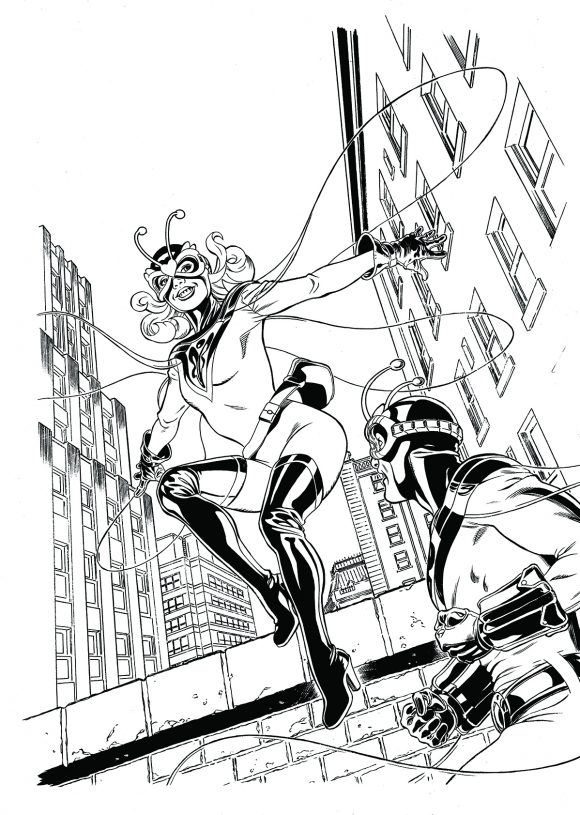 This would also be the second cover in the series with a much more realized background and I did a bit of research to make that pop a bit.