In case you’ve missed the news – and I don’t see how you could have – DC and Walmart have teamed up for a new line of 100-page comics that feature new stories and reprints that go back about 10-15 years or so. (Click here for the details.)

I’ve gotten my hands on a couple of them – and here are my 13 QUICK THOUGHTS:

1. The two I have are Superman Giant #1 and Justice League of America Giant #1. (I still have to track down the Batman and Teen Titans issues.) Overall, these are a fascinating look at how DC is trying to reach readers who don’t necessarily venture into comics shops. The new lead stories are very basic and not at all continuity dependent, and the reprint back-ups – culled from both the New 52 era and before – are basically introductions to those characters. All four first issues are out now. Starting in August, Superman and JLA will be out the first week of the month and Batman and Teen Titans will be out the third week of the month. 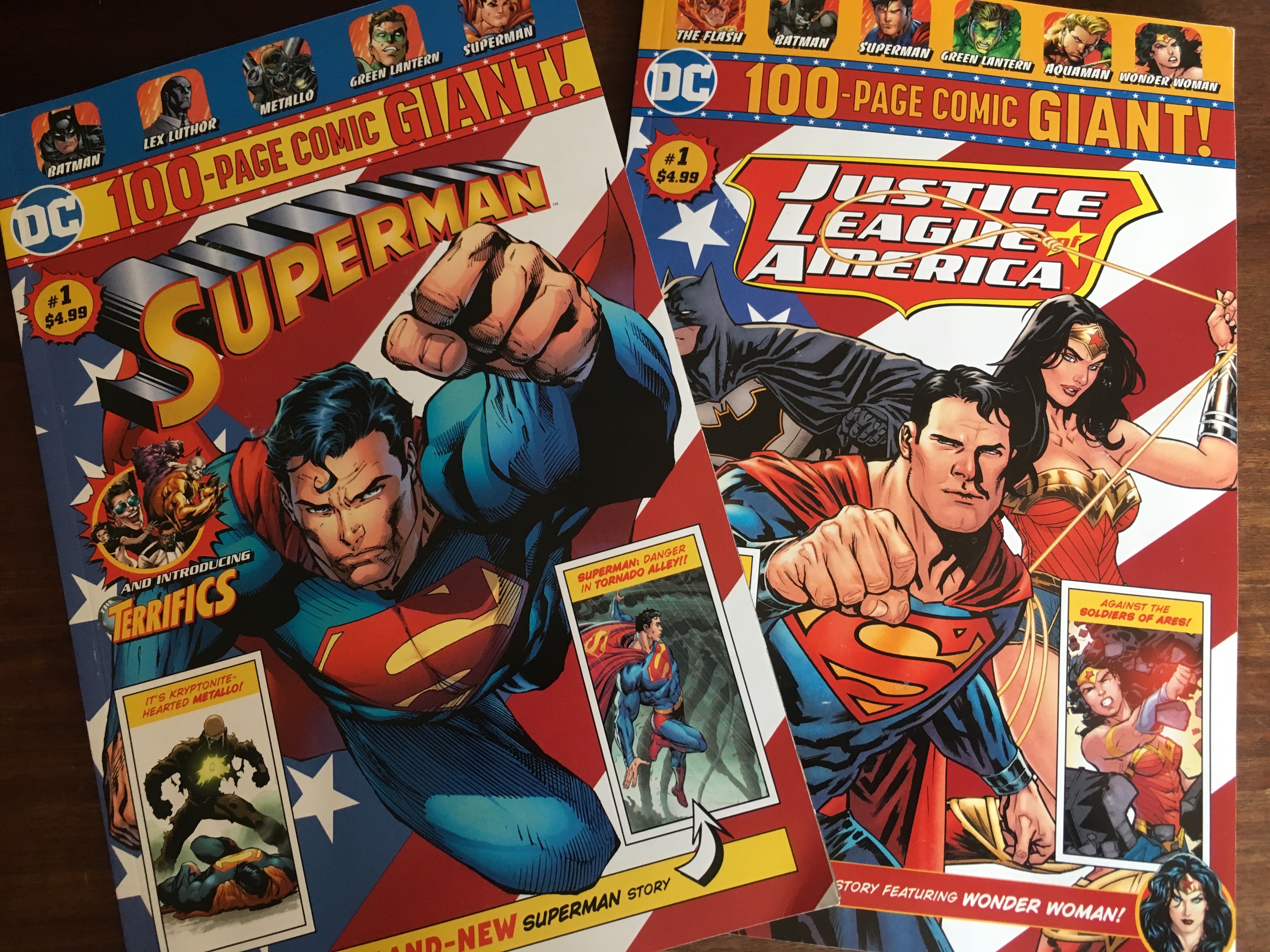 2. It’s almost incidental to review the lead stories because this whole initiative is really about the packaging and the distribution. And that’s the prism through which I judge the stories. That said, the Superman lead story by Jimmy Palmiotti, Tom Derenick and co. is a very basic Man of Steel vs. the elements tale that could have been published in 1978. As a Bronze Age kid, that’s a real compliment. The set-up is simple, the art is pleasing – with shades of Jose Luis Garcia-Lopez – and anyone can read it and know exactly what’s going on. 3. Justice League of America’s lead story is a Wonder Woman solo tale by Tim Seeley with line art by Rick Leonardi. It’s a bit more challenging, violent and politically loaded than the Superman piece. That’s perfectly fine, obviously, but it seems to be aimed at a different audience than the Superman story. 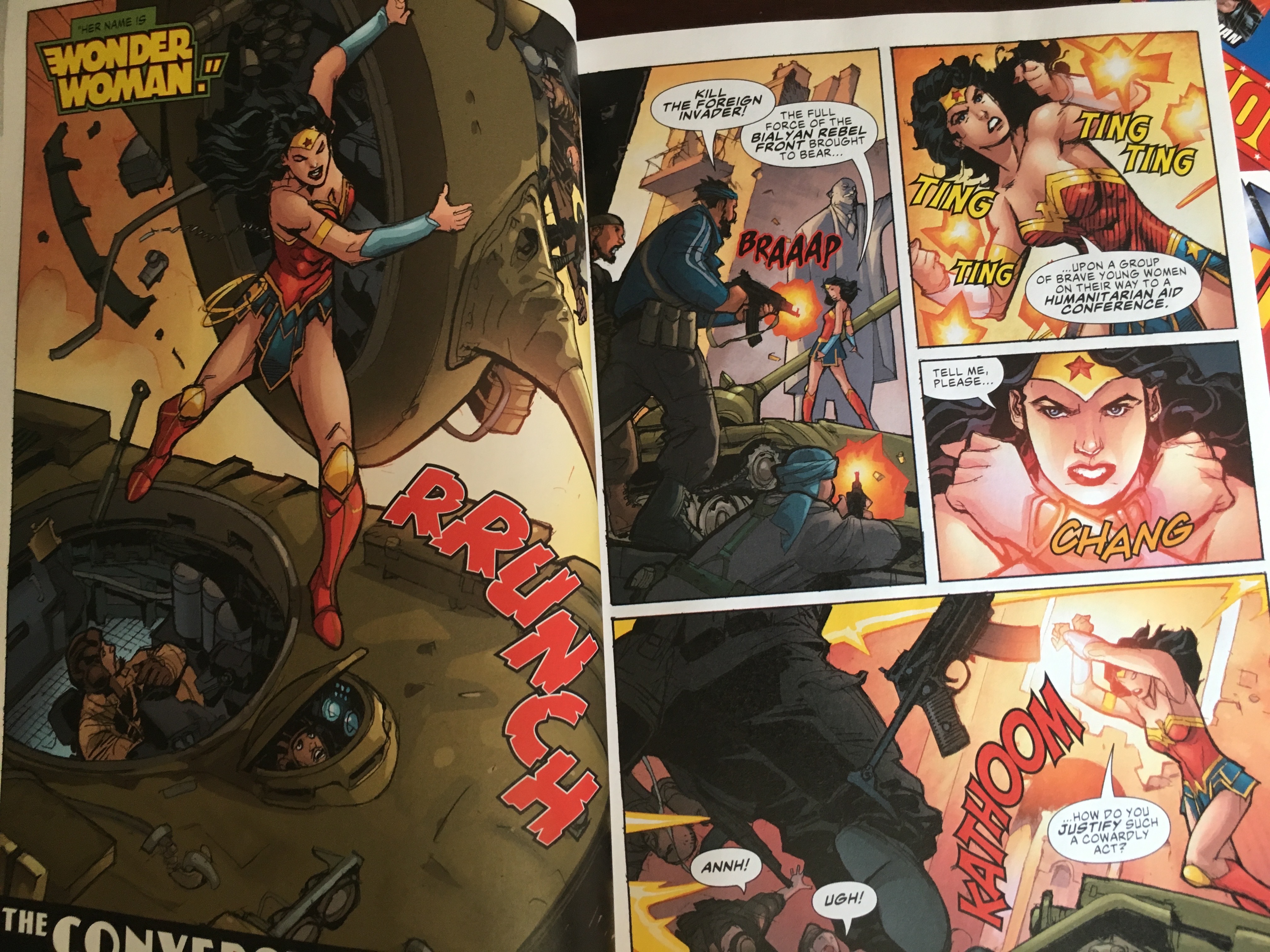 4. DC – and, by extension, Walmart – is trying to reach people who know these characters more through movies, TV and video games. It’s interesting to me, then, that Wonder Woman, whose movie was so immensely popular, does not have her own title (at least not yet). She’s headlining JLA, for now. 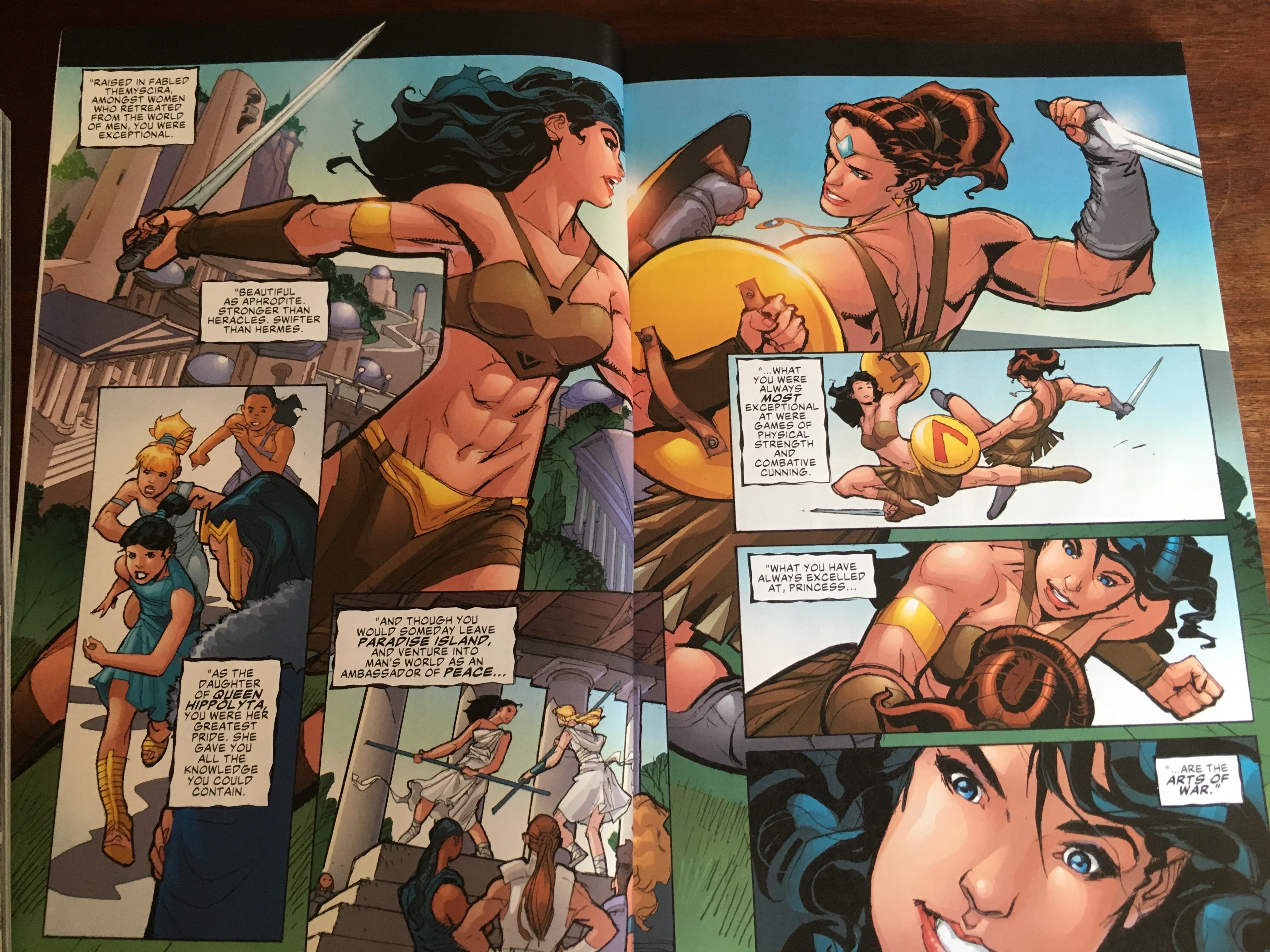 Both lead stories featured brief retellings of the hero’s origin. 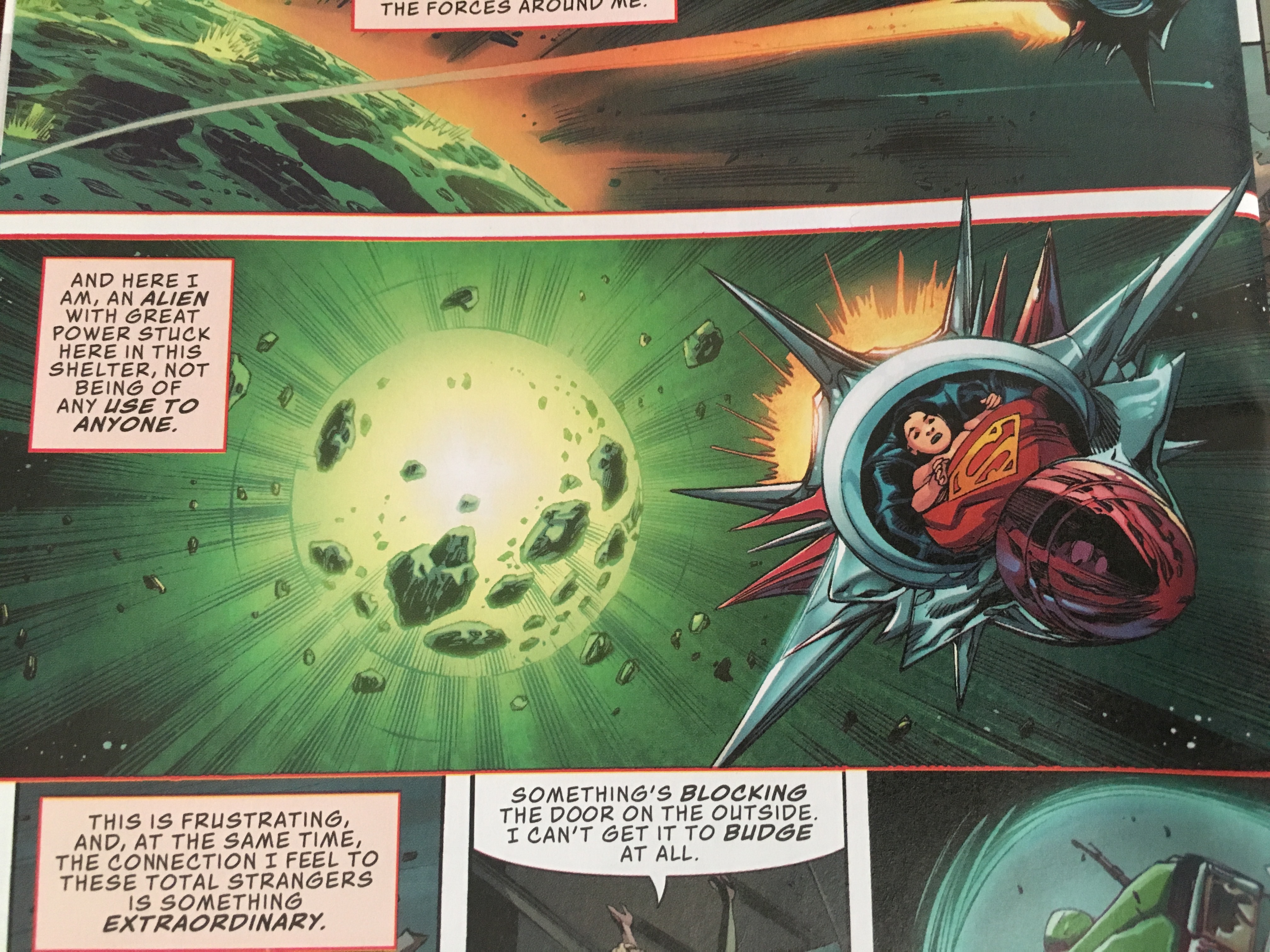 5. The lone Justice League story in the book is from Geoff Johns and Jim Lee’s New 52 Justice League #1. The other stories are from The Flash #1 and Aquaman #1, also both New 52. I liked all of these when I first read them and they work perfectly fine for new readers. I get the sense that this will be a catch-all superhero book.

7. Each story is preceded by a little blurb introducing the character and the premise and is followed by a tease for the next issue. I hope that recap pages are introduced in the second issues – and I really wish DC would bring those into its mainstream titles. Marvel does a great job with those. 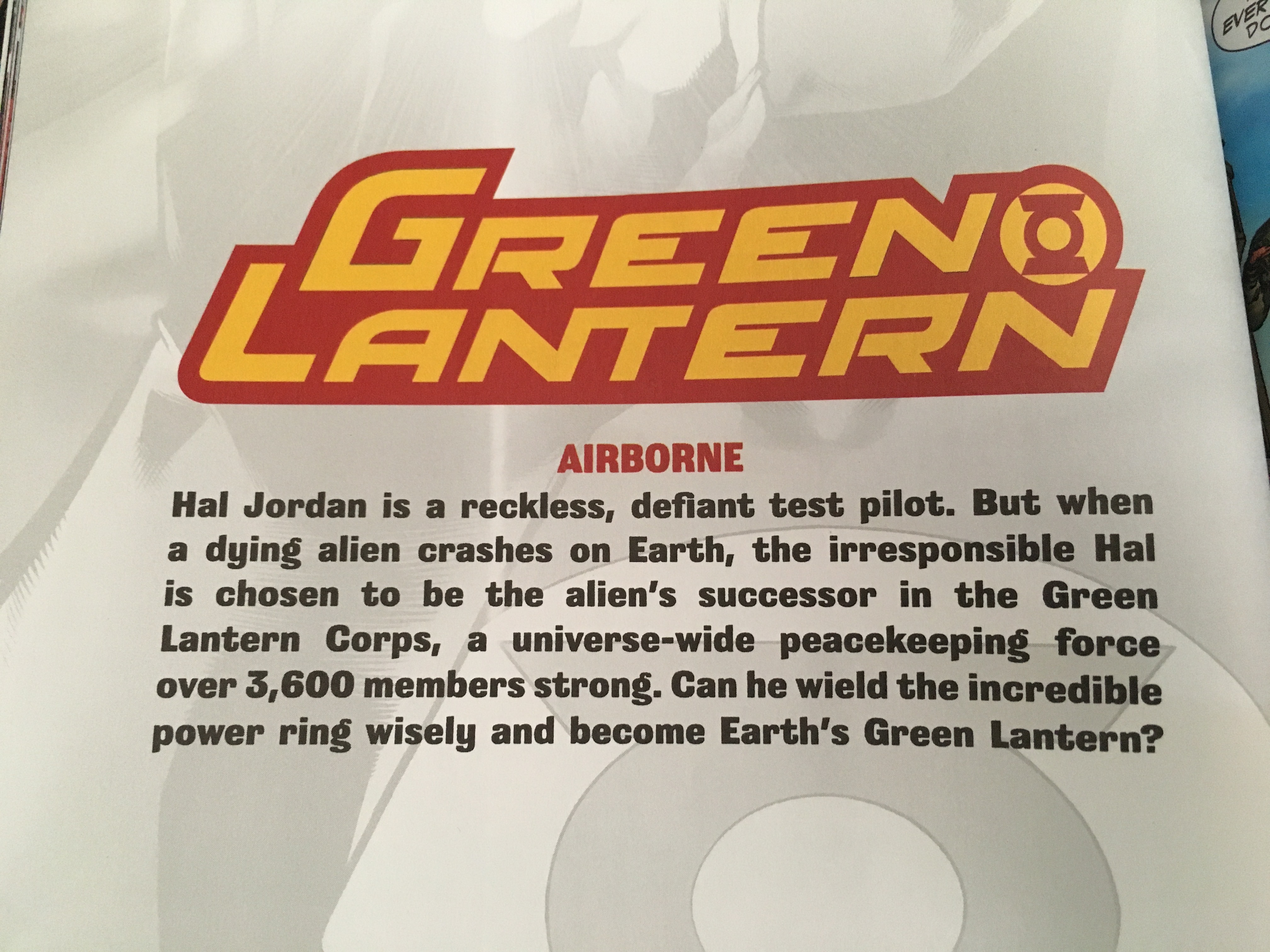 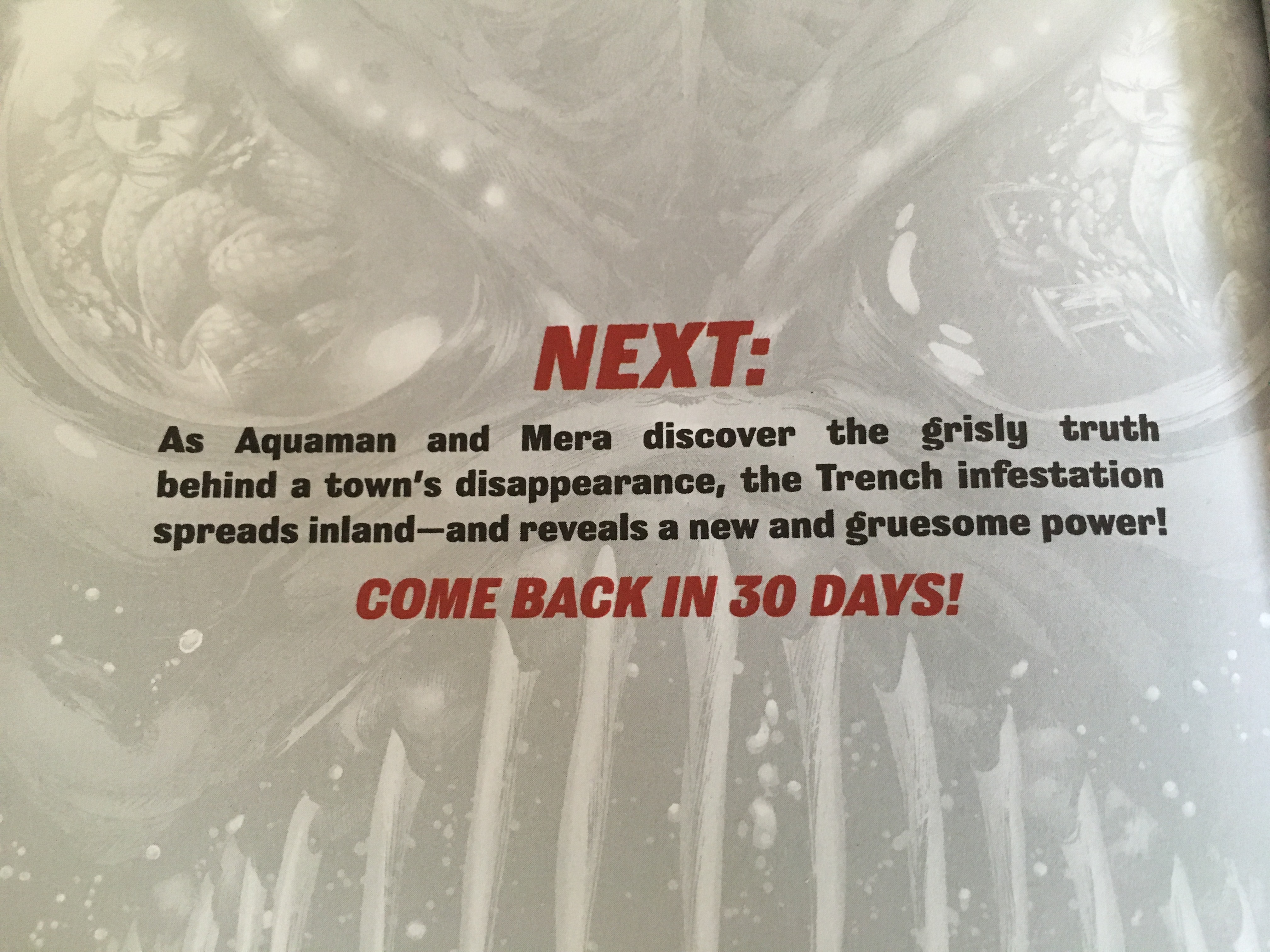 8. The issues are indeed reminiscent of the 100-Page Super Spectaculars of the Bronze Age, at least those that featured a new story and a raft of reprints. And like those, the new ones generally don’t include the covers of the issues the reprints came from (though they should). Instead of advertisements for, oh, I don’t know, Count Dante: The Deadliest Man Alive, there are ads for trade paperbacks starring the characters in the issue or other modern DC hits like Metal. 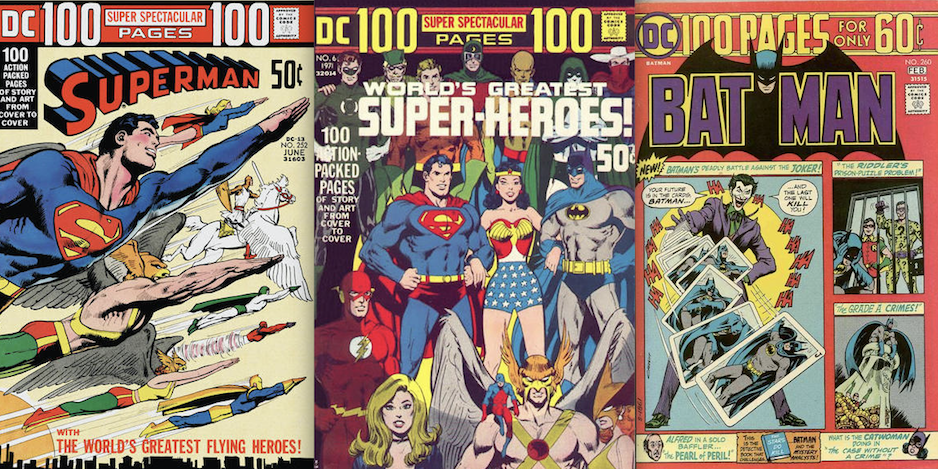 9. What’s missing, though, is anything from before this century and I think that’s too bad. I would love it if new readers were shown important stories going back 80 years: The first Superman story, the first Batman story, the first Wonder Woman story, and on and on. You can’t tell me that these readers – who are likely to be kids and teens – wouldn’t be intrigued by that. Besides, DC has a lot of these stories in trade paperbacks and available digitally. If you’re trying to get readers into comics, why not try to get them invested in your entire catalog? 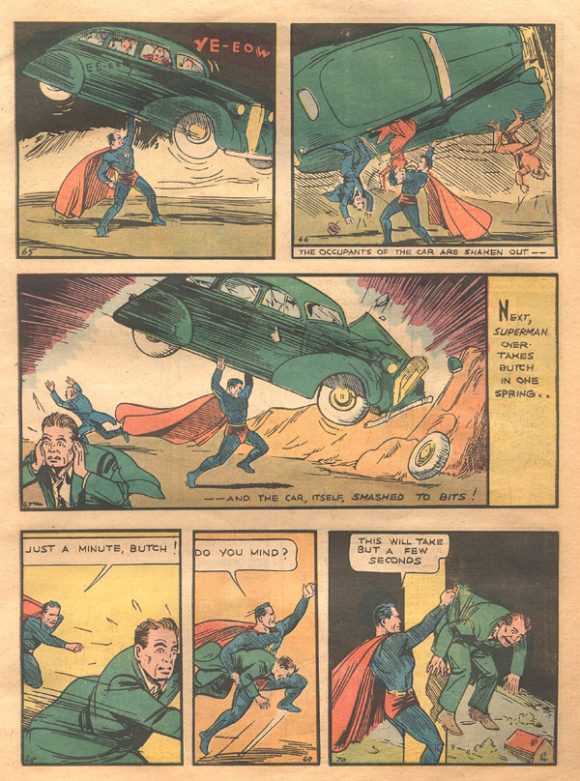 10. Now the rub: I’m not a fan of Walmart. I’m not alone, either. I wish DC had a different partner, but so be it. More the problem, practically speaking, is accessibility:

There are swaths of the country that are not served by Walmart in part because of space availability. And of the roughly 5,000 stores and clubs that are out there, only 3,000 are participating in the launch. I work in New York City and live right outside it. There are no Walmarts in the most populous city in the country. My town, a densely populated suburban city of 58,000 that draws thousands more by day and night, actually has a rare downtown Walmart but it’s on the small side – and it’s not carrying these. That means a road trip at least 30 minutes away with no guarantee that the store will still have these in stock. (And have you ever tried calling a big box store to see if something is available?)

Since DC is not saying – at least for now – whether the new stories will be collected in trade or made available digitally, thousands of potential readers are being left out. I fully acknowledge that I’m spoiled when it comes to the number of great comics stores near me. But now I have to decide whether chasing these down is worth the effort – especially when there’s no set day when they hit the stands, only weeks of the month. The thing is, I like what I’ve seen. 11. Keeping that in mind, I really don’t want to go the eBay route. If you do that, you’re only encouraging scalpers. The whole point of this venture is to grow the comics market and reach into places it used to go: general retail. If scalpers feel empowered to raid these stores and flip the books, the whole point is defeated: Chances are they’re selling to people who already go to comics shops – cannibalizing the market, not enhancing it. And I really want to see DC — and the comics industry as a whole — succeed. 12. Overall, though, it’s all fun and exciting, the idea that more people could start reading comics. That said, I’d be upset if I were a comics-shop owner and I didn’t get to sell Brian Michael Bendis and Nick Derington’s 12-issue Batman story that starts in September.

13. One last thing about the issues themselves: The books are squarebound with a somewhat glossy cardboard stock. The interior pages are somewhere between newsprint and the typically glossy pages you see in DC’s mainstream comics. I like the whole package.

Dare I say, they feel, look and read … like comic books.