TOYHEM! Swing along with Spidey…

It’s the 2021 TOYHEM finale! And this year, I’ve picked an all-time fave to feature – Ideal’s 1973 Spider-Man cardboard-and-vinyl playset. Seems fitting what with the villain-packed Spider-Man: No Way Home blowing up the box office. 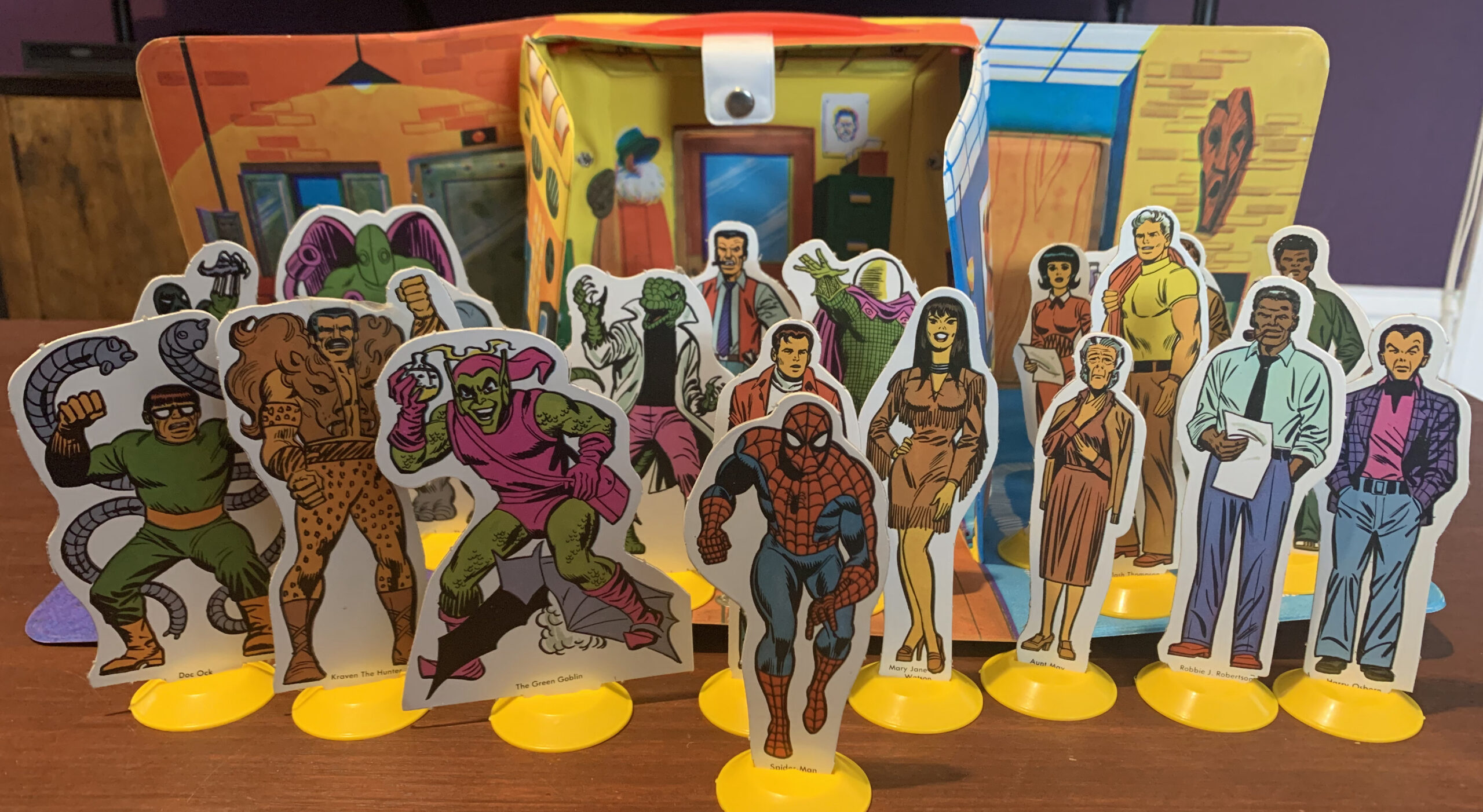 Unlike Ideal’s 1973 Batman playset, I couldn’t tell you exactly where I was when I got its Spider-Man counterpart. All I know is that it was some time shortly thereafter and it went a long way toward cementing my love for the wall-crawler.

See, I was weaned on the 1967 cartoon and by the ripe age of 6, I already had a Spider-Man Mego (I’m pretty certain). But in a lot of ways, this playset – even with its two-dimensional cast — allowed me to get my Spidey on in ways Mego couldn’t.

With Mego, there were two Spider-Man adversaries – first-rate versions of the Green Goblin and the Lizard, to be sure. But here, you got a total of 19 characters – including eight vile villains – one prop, and three play areas with doors that open: Pete’s pad, the Daily Bugle offices and a lab hidden in a decrepit neighborhood.

Time for the grand tour!

THE HERO AND HIS FRIENDS: For the sake of comparison, the Batman set included a handful of maskless allies, like Alfred, Commissioner Gordon and Chief O’Hara, as well as the Caped Crusaders’ alter egos. Here, we get two groups of Spidey civilians – drawn from his personal and professional lives: Peter Parker himself, Mary Jane Watson, Aunt May, Harry Osborn, Flash Thompson and Randy Robertson… 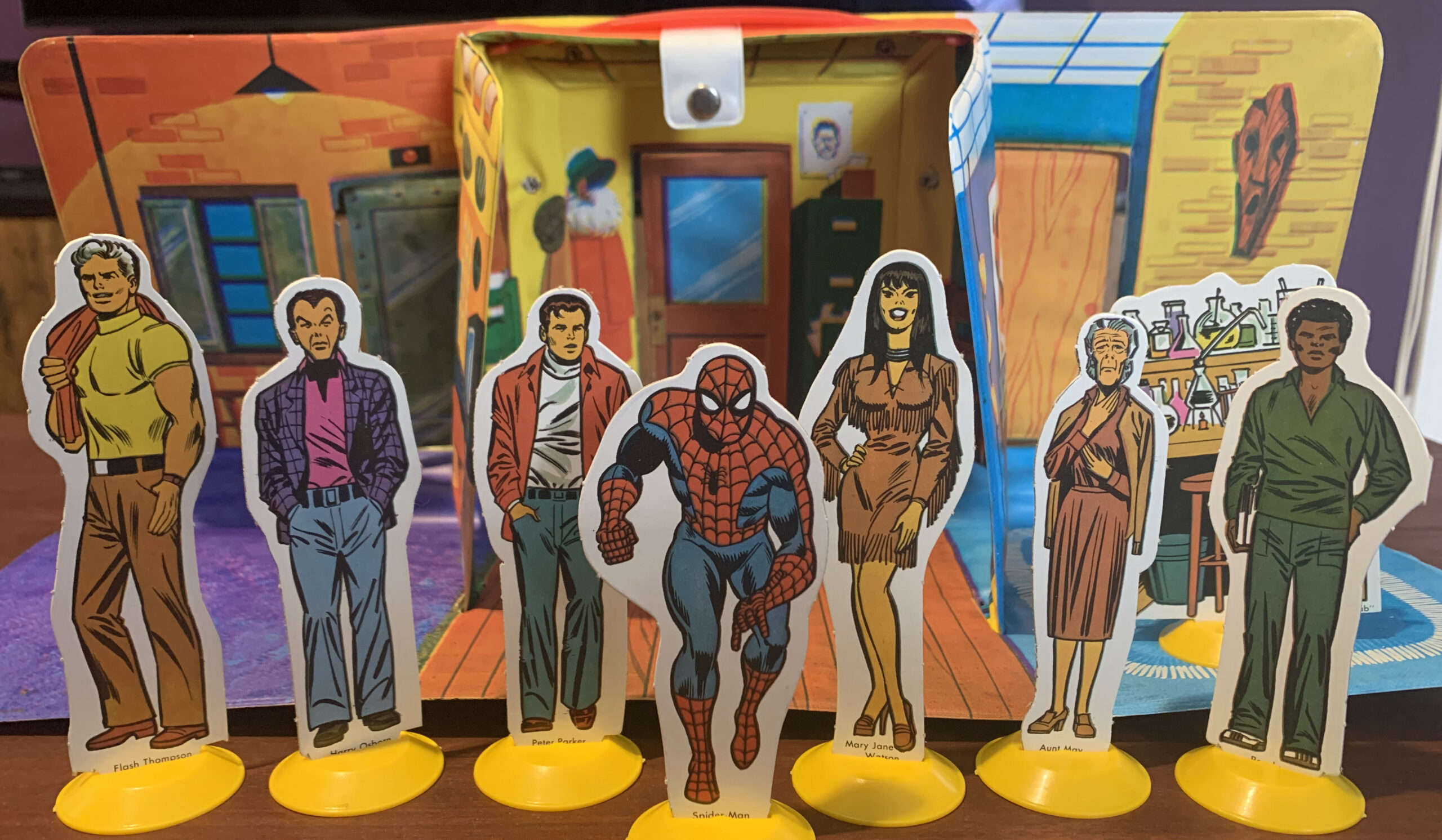 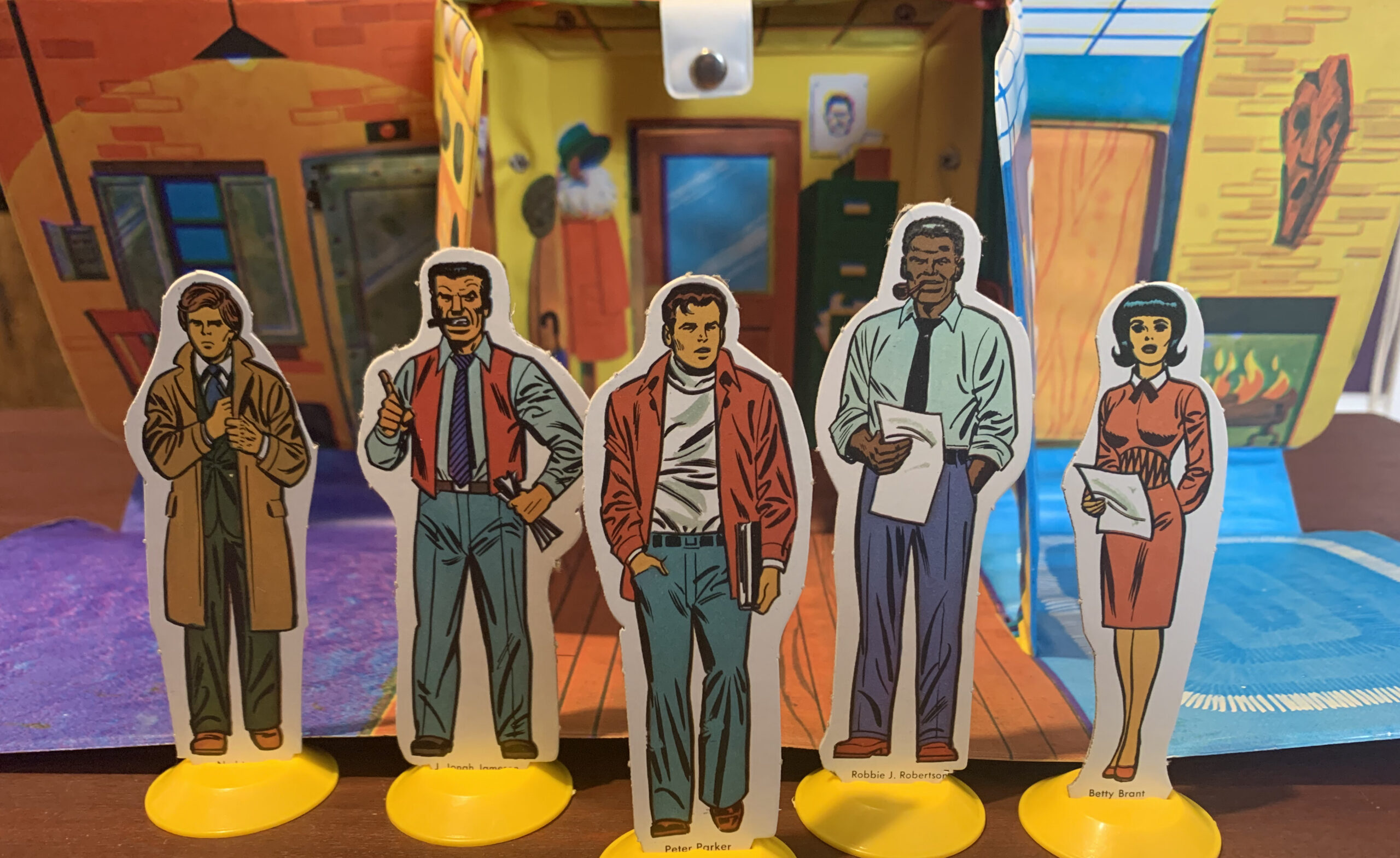 THE VILLAINS: Forget the Sinister Six – here you have the Hateful Eight (thanks, Quentin!): the Green Goblin, Doc Ock, the Lizard, the Beetle, the Prowler, Kraven the Hunter, Mysterio and the Rhino.

You could even argue that a few of the “civilians” could have been sacrificed to include even more baddies, like the Vulture, the Sandman, Electro and the Scorpion. But, hey, this was still a smorgasbord of evil. 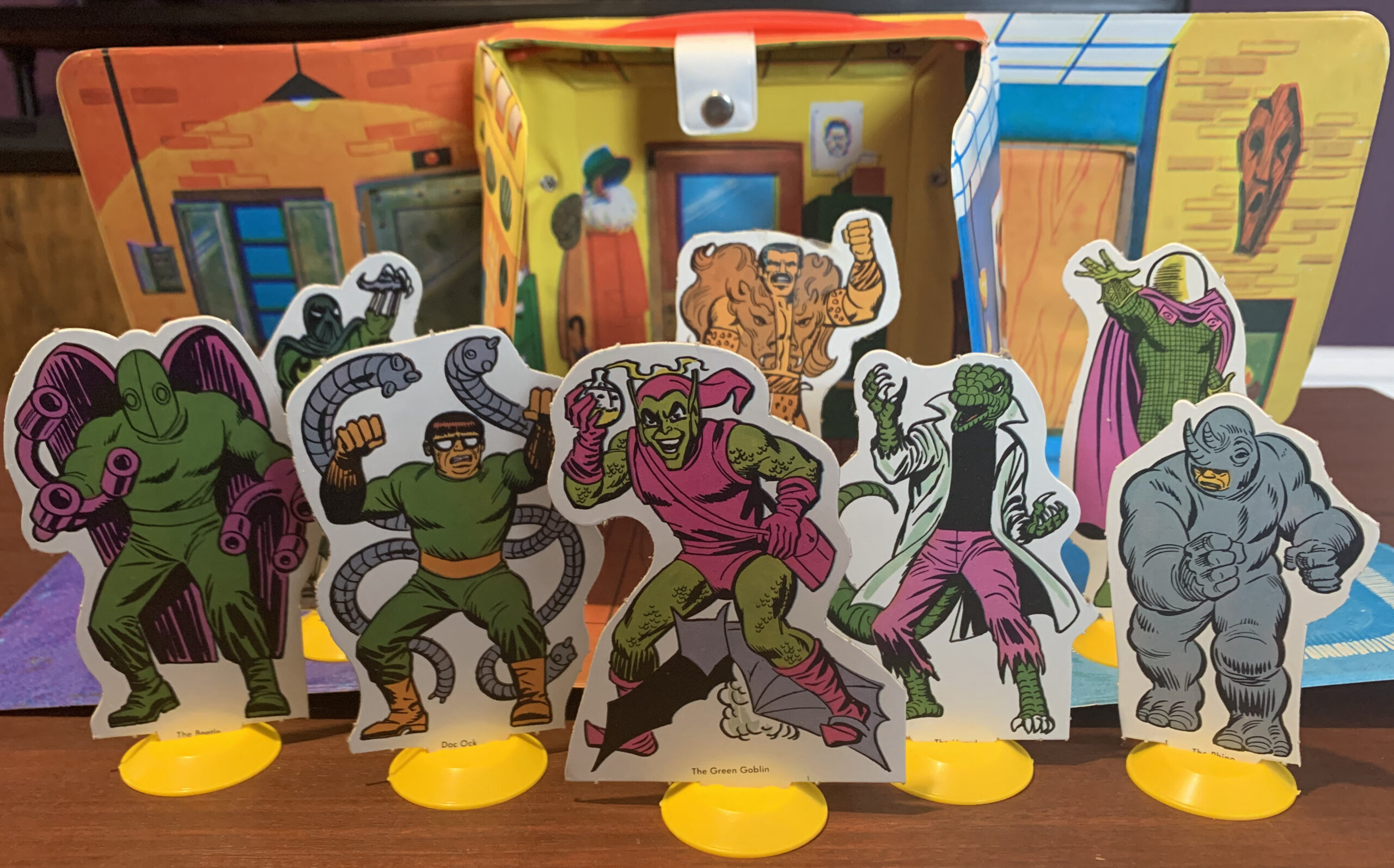 THE SETTINGS: The Daily Bugle takes the center spot, flanked by Pete’s far-too-swanky bachelor pad (though Harry was paying for most of it, I suppose) and a lab that as a kid I thought belonged to Spider-Man but now realize must have been a place for the villains to work on their pumpkin bombs, dome helmets and mechanical arms.

The Batman edition featured plenty of props, from Bat-vehicles to valuable treasures waiting to be stolen. Peter Parker, on the other hand, just has his lab bench. But that’s cool – this decision (and the fact that Spidey doesn’t have a fleet of vehicles) — gave us a lot more characters to play with. (Side note: Ideal also produced Superman and Dick Tracy versions.) 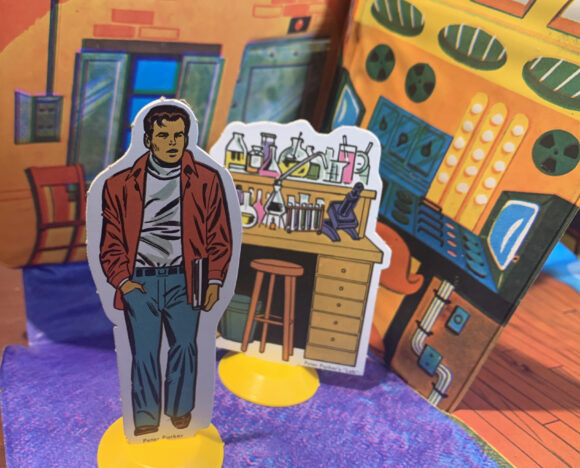 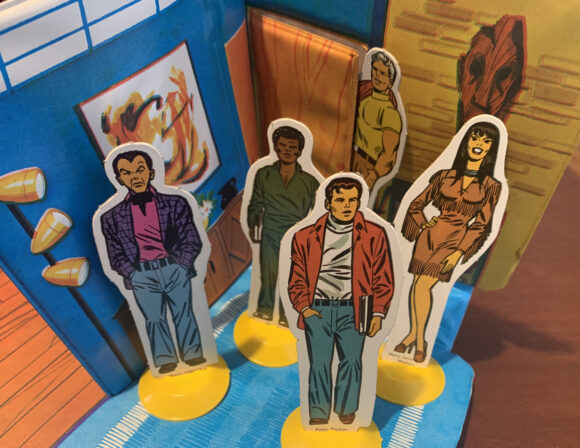 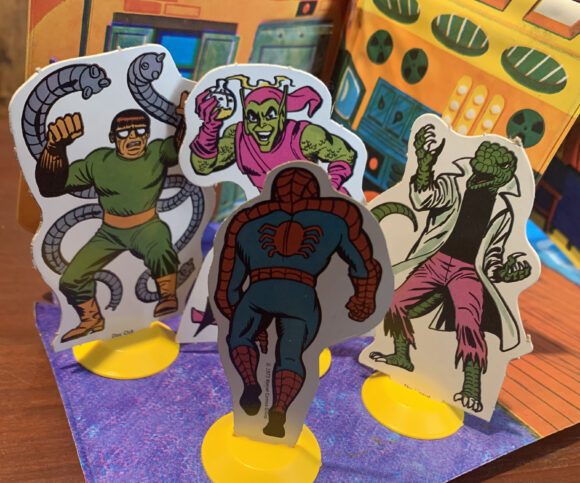 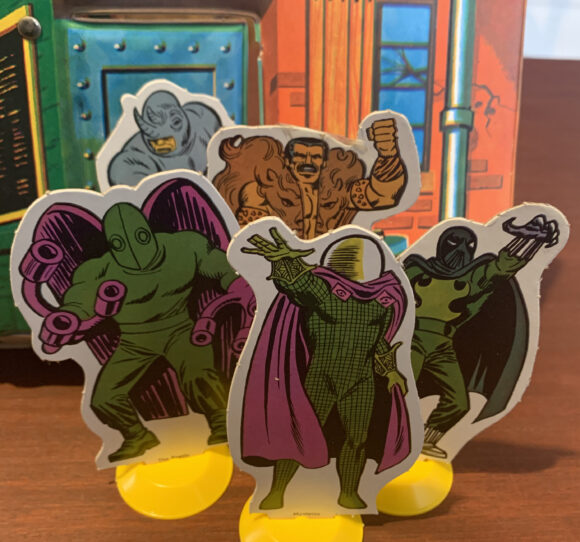 I’m not sure who was responsible for the art. John Romita for sure did the front cover and the figures definitely echo his style. Marvel took its licensing seriously, so I’m willing to bet the characters were done in-house. My educated guess is that it was some combo of Marie Severin and Romita – though I could be wrong about that. (Please leave a comment below if you have any firm info.)

Anyway, one of the coolest aspects of the set is you could not only stage the soap opera of Pete’s personal life or a battle royale with any number of villains, you could create those classic tropes and moments, like… 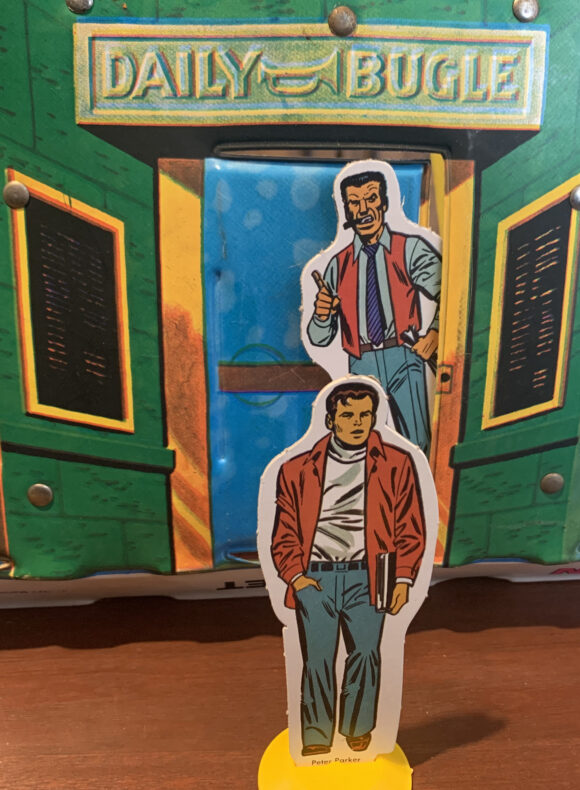 “And, don’t come back until you get me those pictures, Parker!” 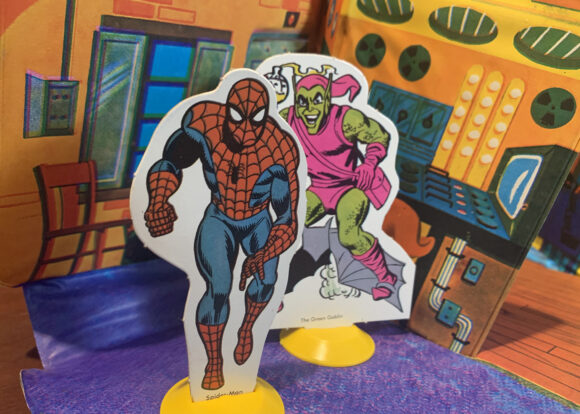 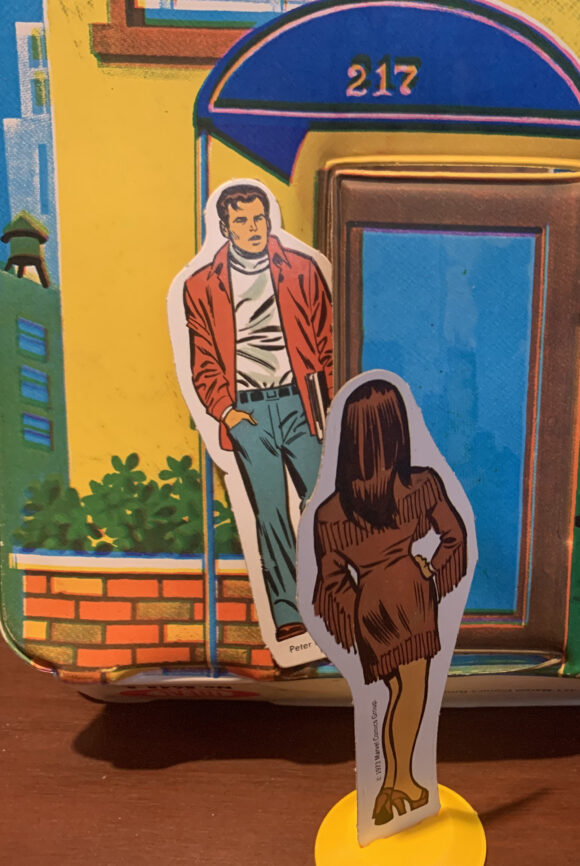 “Face it, Tiger! You just hit the jackpot!” – from the reverse angle!

Ultimately, few toys over the decades have captured the full range of Spider-Man’s world like the 1973 Ideal playset. It didn’t matter that these weren’t $250, super-articulated, 12-inch figures (as cool as those are).

What mattered is that these little, lo-fi cardboard playthings sparked a richness of imagination virtually unmatched in the nearly 50 years since this set was released.

— THE 1973 IDEAL PLAYSET: The Most Underrated BATMAN Toy Ever. Click here.