‘I Was ROBIN THE BOY WONDER’s Daughter’

A unique perspective on an uncommon upbringing.

UPDATED 4/30/18: Hey, folks. Since she fell ill, there’s been a lot of renewed interest in this interview Lisa Ward gave a few years ago about what it was like growing up “Robin’s daughter.” We’re presenting it again to make it easier to find. We wish Lisa and the Wards all the best. — Dan

I guess since as a kid I wanted to hang out with Batman and Robin (still do), I got the idea to talk to someone who knew what it was really like living with a member of the Dynamic Duo: Lisa Ward, Burt Ward‘s daughter.

That had to be one unique upbringing, doncha think? So I asked Lisa, who is an incredibly energetic booster of her dad’s legacy, if she’d agree to a Q&A and she readily agreed. She even provided pix from the family album. 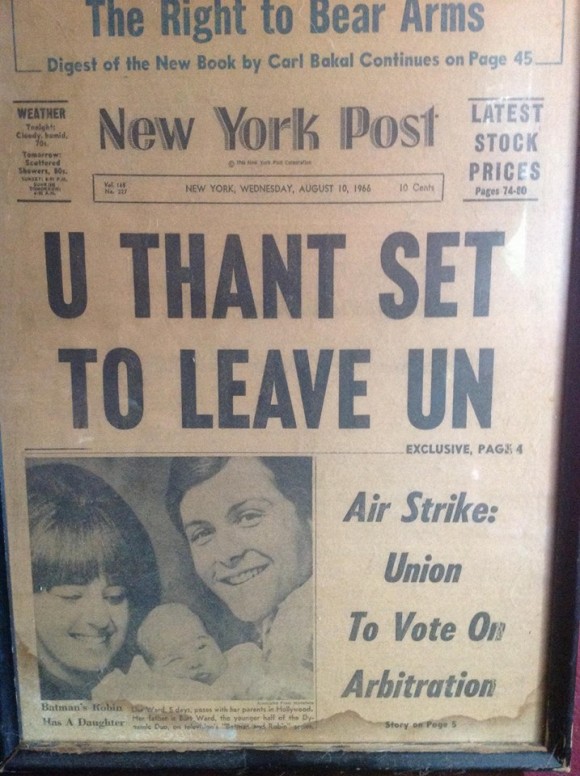 Lisa’s birth was front-page news in the World’s Greatest Tabloid.

For her own part, Lisa’s in real-estate re-financing and helps foster animals — her dad and stepmother run Gentle Giants rescue and a related dog food company. She only lives 10 minutes from Burt’s California ranch.

Dan Greenfield: What’s your earliest recollection of knowing your dad was Robin the Boy Wonder?

Lisa: Probably grade school. He was just Dad to me (who) just happened to be on TV, no big deal. I didn’t pay it much attention then. What I didn’t realize is that once I moved with my mother to a small town in Washington state when I was 6 that the kids in school wouldn’t believe me. That’s when I realized he was a little different than most other fathers. 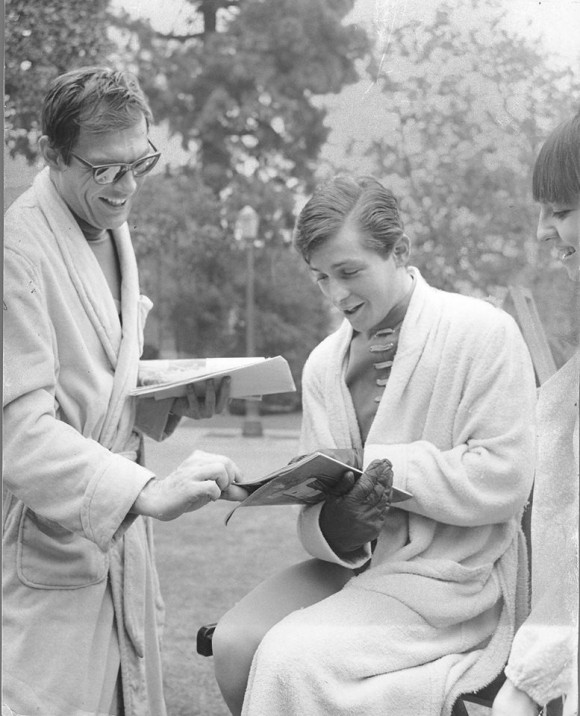 Dan: Did you watch the show when you were a child?

Lisa: I watched it every day after school along with Gilligan’s Island, The Munsters and Bewitched! I would get sooooo excited during the opening! I still do! I always loved the theme song and seeing my dad’s name! I thought he was so cool! My heart literally beat fast every time the opening played!

I have to say as a child it’s very exciting thinking your dad is a real crime-fighting superhero! Back then, I thought it was real! Along with the villains! I was deathly afraid of Catwoman, and still was deep down when I actually sat next to her at a Batman anniversary cast dinner when I was 20! I was literally frozen in fear when Julie Newmar spoke to me! She really WAS Catwoman to me, even then!

Dan: What was the best part of growing up Robin’s daughter?

Lisa: Getting to watch him on TV growing up. Getting to meet all the characters on the show. Getting to meet lots of neat celebrities and go to fun events. My Dad would have already been a superhero in my eyes even if he didn’t play one on TV, as probably most little girls love their daddies, but to actually know he was one made me very proud and I felt very protected! Also, meeting all of his fans, even today, they are so kind, loving and loyal. Hands down one of the best parts is knowing that others appreciate and love my dad almost as much as I do! 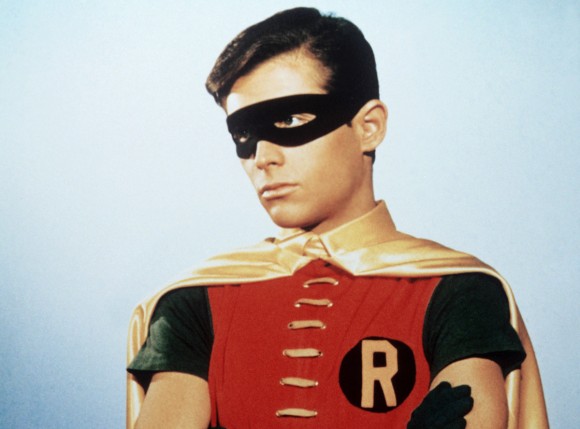 Not from the family album

Dan: What was the downside?

Lisa: The downside for me was when I got picked on in elementary school because they thought I was a liar. After a visit from my dad they finally believed me! But it was rough at first getting bullied. 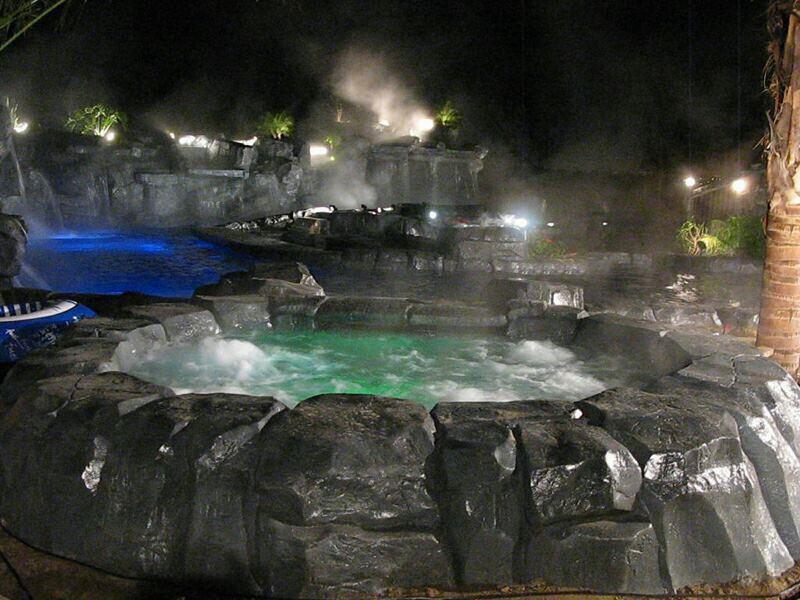 Dan: Were you ever friendly with other cast members or their children?

Lisa: My Dad lived down the street from Burgess Meredith for a while in Pacific Palisades and my Dad would say, “Hey Lisa, you remember the Penguin, don’t you?!” Aaaghh! I was scared of him too!

Also, growing up my dad and Adam always played tennis together. I specifically remember this one time in Malibu when they were playing, people started to notice and someone said, “Hey look! Batman and Robin are playing tennis!” Another time they played I decided to make fun of Adam’s messy hair. I said “Adam, you have a rooster tail in your hair, hahaha!” He stopped and turned towards me and lowered his voice …”that’s because I slept with a hen last night, Lisa!”

He was always cracking jokes. Another thing he used to say to me all the time was, “I’ve known you Lisa since you were a twinkle in your father’s eye!” I always was a little starstruck around Adam and when he and Dad hung out there was always that same chemistry you see in the TV show and their voices are both so distinct, it was like watching the show sometimes, minus the inappropriate jokes! (Mostly from Adam’s very dry sense of humor!) … Regarding their children, I only met Adam’s kids a few times, as they lived in Idaho. 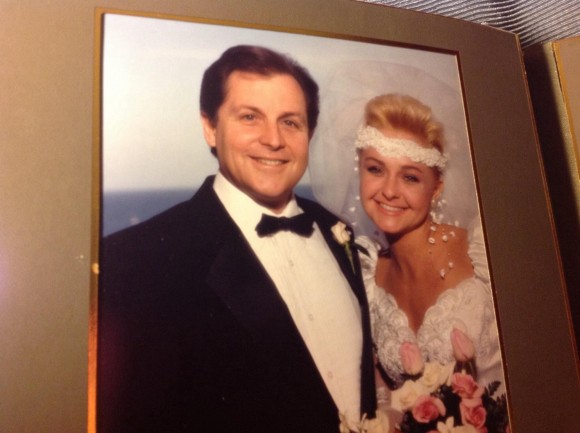 The Boy Wonder — the Father of the Bride

Dan: Do you have any of the merchandise yourself?

Lisa: Not the new stuff yet. I have plenty of really neat memorabilia though. But I must get one of those new action figures that are incredibly realistic. I mean, my dad and I couldn’t believe how they have captured his features so well! We have exchanged many emails back and forth containing photos of them and we talk about which one is the most realistic. Brilliant work. What I’d really love to get my hands on is one of those new Batman ’66 Halloween Robin costumes! 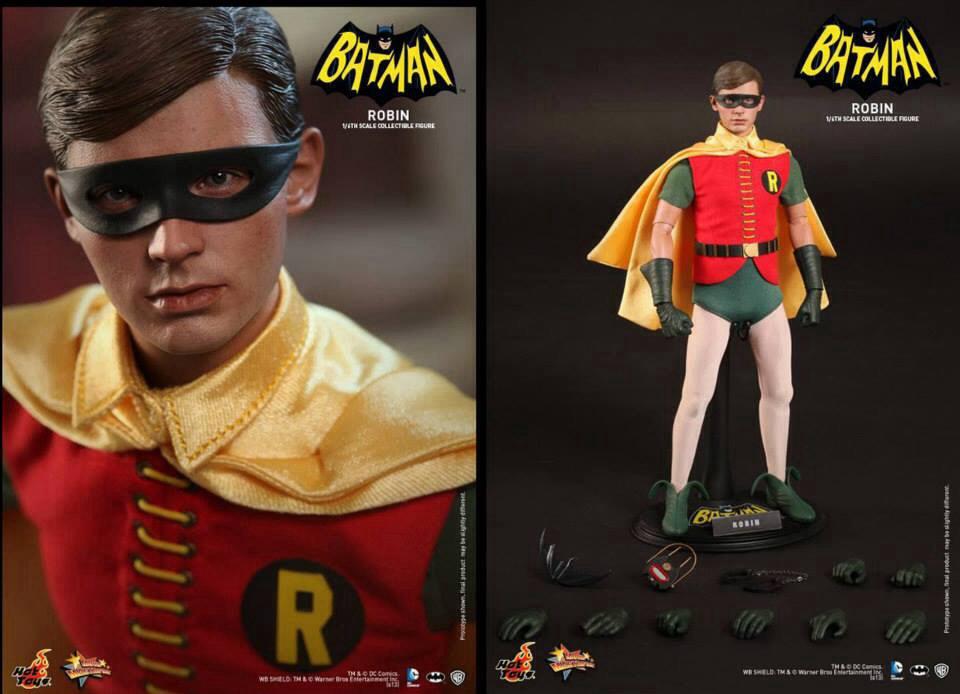 She’s not kidding about the action figures. I’ve already ordered mine.

Dan: What about your children? What’s their take on all of this, especially since the merchandise became available last year?

Lisa: They are just recently realizing how cool it is. Maybe because of all the merchandise? I must say, there seems to be a groundswell of renewed appreciation for the classic Batman ’66 series as an important part of American pop culture, and I’m grateful that my young adult children, 20 and 22, are getting to witness it! They seem to finally get it, that grandpa is actually “cool!” 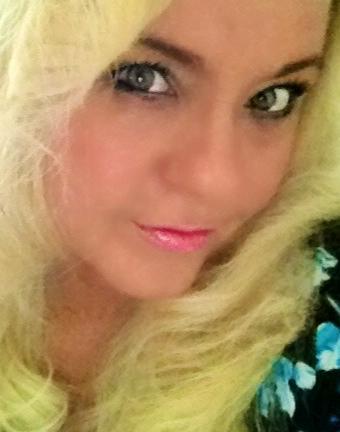