For comics fans of a certain vintage, the Heroes World Catalog was it.

TV has A Charlie Brown Christmas, It’s a Wonderful Life and A Christmas Story — reruns that are holiday traditions. At 13th Dimension, we’ve got the SUPER-STAR HOLIDAY SPECIAL — a series of timeless remembrances by some of the best in the comics biz, including Kelley Jones, Annie Nocenti, Ron Marz and MORE! Click here to check ’em out!

Here’s columnist Rob Kelly — he of our REEL RETRO CINEMA column — on the vicarious thrill of the Heroes World Catalog and its publishing brethren:

Growing up, I always had a pretty good Christmas; Santa usually brought me the stuff I wanted (a Kenner Death Star and a 12-inch Mego Hulk doll? Sweet!) so I have nothing but fond memories of that time of year. But when I do think of those times, the most prominent memory is of a gift that probably cost my parents the least.

That’s because one year, amid all the superhero and Star Wars toys that represented my usual holiday haul, my parents got me a Heroes World Catalog.

For the uninitiated, Heroes World was a mail-order company located in Northern New Jersey that carried all manner of mouth-watering merchandise: toys, comics, posters, school supplies, t-shirts, bed sheets, stickers, magazines; pretty much anything that could have a licensed character slapped on it, Heroes World carried. (They also had retail outlets and sister catalogs.) 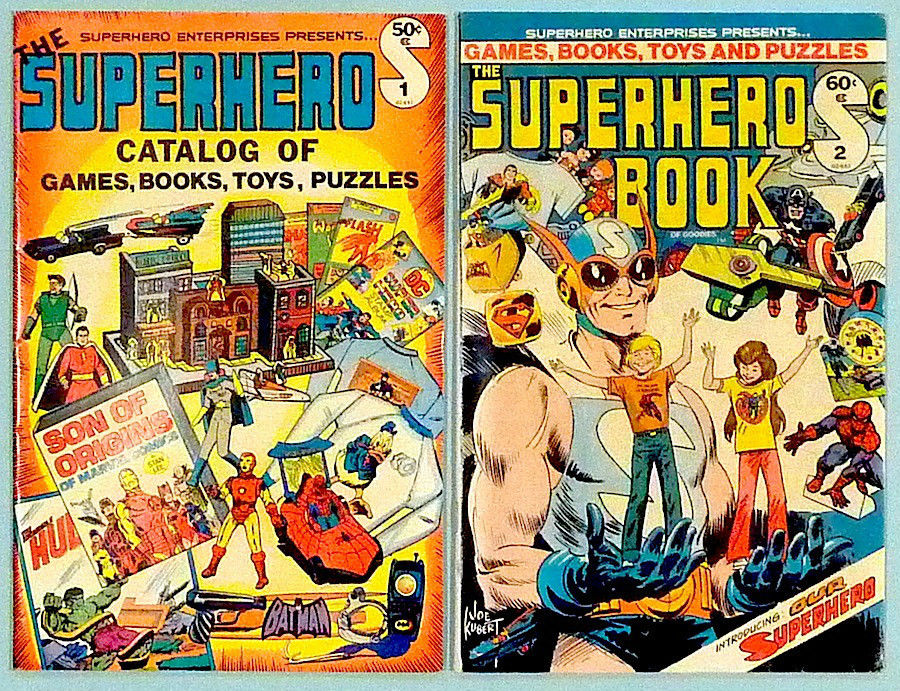 DC and Marvel comics ran ads for stuff like this in their comics, but those ads were a single page here and there; this catalog was 30-plus pages of item after item with characters interacting in a way they never would or could in the comics: DC, Marvel, the Universal Monsters, Kiss, Tarzan, characters from Star Wars, Star Trek, Planet of the Apes: They were all here, just a mail-in order form away.

To this point, I had no idea all this stuff existed, so seeing page after page was akin to when The Wizard of Oz goes from black-and-white to color: Despite all the other really cool presents I got, I distinctly remember spending most of that X-Mas morning just drinking it all in, reading it as if it were one of my comic books. In fact, because the catalogs were mostly drawn by Joe Kubert (and the staff and students from his school, a place I myself would attend about a decade later), I treated them like they were comic books: I stored them alongside my beloved comics, and my brain saw no reason to keep them separate.

If pressed, I would say that I would never give up the convenience of the Internet, where virtually any item I might want is just a few clicks (and a few bucks) away. But nothing beats the pure, unadulterated, white-hot excitement that an 8-year-old boy felt that Christmas morning, being given a glimpse of a world of fun, danger, action, and suspense that lied tantalizingly just out of reach.