A TREASURY TO TREASURE: Christmas with the Super-Heroes!

Home » BATMAN'S HOT-LINE » A TREASURY TO TREASURE: Christmas with the Super-Heroes!

It’s the SUPER-STAR HOLIDAY SPECIAL: a series of holiday remembrances by some of the best in the biz — like J.K. Woodward, Bill Walko and Annie Nocenti! Click here to check ’em out!

Rob Kelly writes our REEL RETRO CINEMA column, but beyond the confines of 13th Dimension he’s a comics history maven and podcaster extraordinaire. He recently launched TreasuryCast, devoted to his favorite comics format. I’m proud to have been a guest on it twice already, talking about two fantastic Batman editions. (Click here for the TreasuryCast on Limited Collectors Edition #C-37, the special villains issue, and click here for LCE #C-51, the Ra’s al Ghul issue.) He’s long had a website dedicated to treasuries too, and you should click here to check it out.

With all this going on, I asked Rob if he wanted to feature one of the Christmas treasuries here and he readily agreed, choosing DC’s first, from 1974. So warm some cider and enjoy this fun retro review. And then have a listen to the accompanying TreasuryCast on the issue, here. 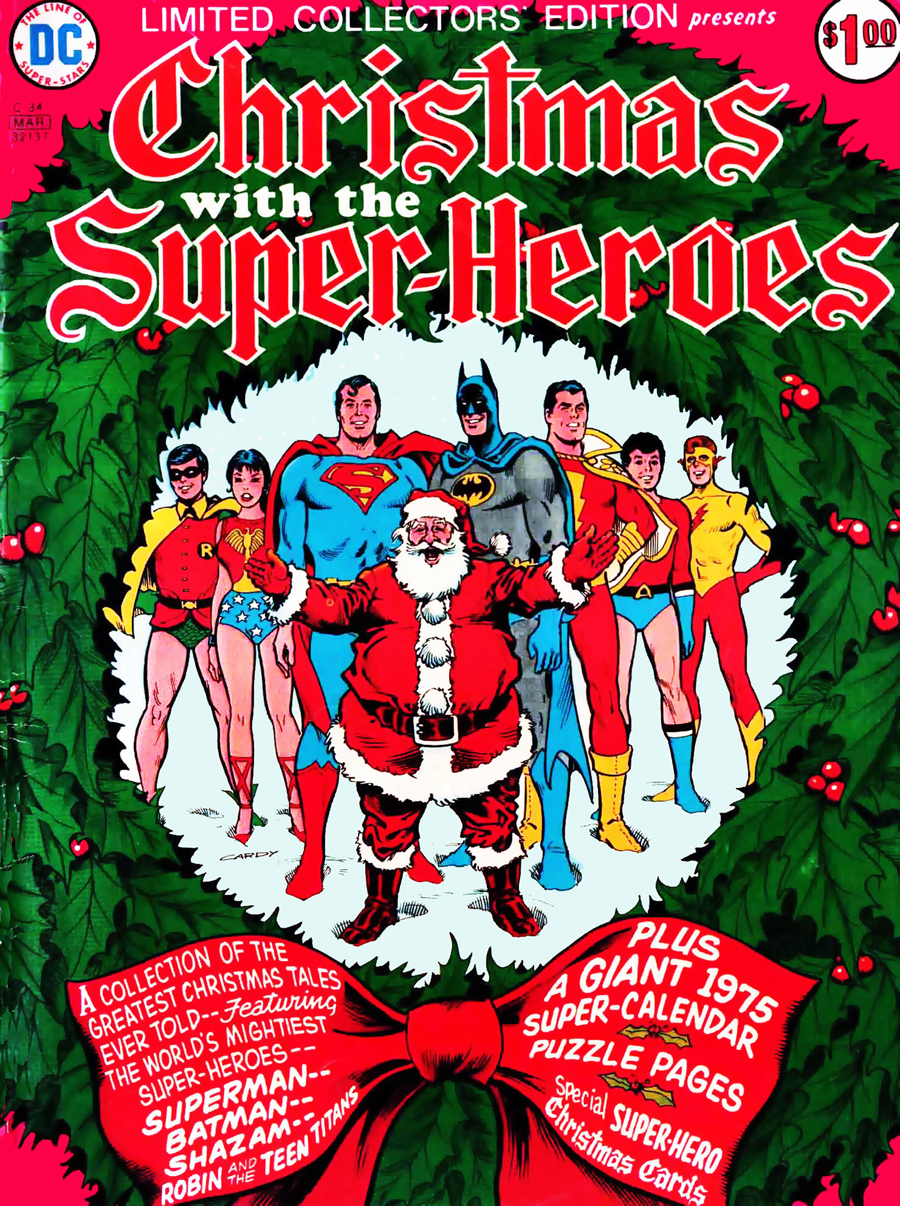 DC Comics has been celebrating Christmas in their comics almost as long as the company has been publishing. So when they started putting out treasury/tabloid-sized books in 1972, it was only natural that they would use this exciting new format to celebrate the holiday.

DC actually kicked off its long-running (and, to me, much-beloved) Limited Collectors’ Edition series of treasury comics with Rudolph The Red-Nosed Reindeer (informally cataloged as, confusingly, Issue #C-20). Rudolph would go on to rack up seven treasuries, all to himself, a record bested only by Superman and Batman!

But the super-powered reindeer wasn’t the only DC “hero” to get in on the act. Case in point, Limited Collectors’ Edition #C-34: Christmas with the Super-Heroes, from late 1974. Adorned with a festive cover by the late, great Nick Cardy, LCE #C-34 features the four-color equivalent of a Christmas tree on Christmas morning: a bunch of big gifts, plus some smaller ones.

The first story is Silent Night, Deadly Night, by Denny O’Neil, Irv Novick and Dick Giordano, from Batman #239. Batman gets involved with a guy who has been stealing charity funds from local Gotham Santas. The Dark Knight Detective learns, however, that this guy is stealing to provide for his young niece, who is seriously ill. Having been driven mad by a cruel former employer, the man knocks Batman out and leaves him tied to a radiator while he goes to kill the old man who did him wrong. 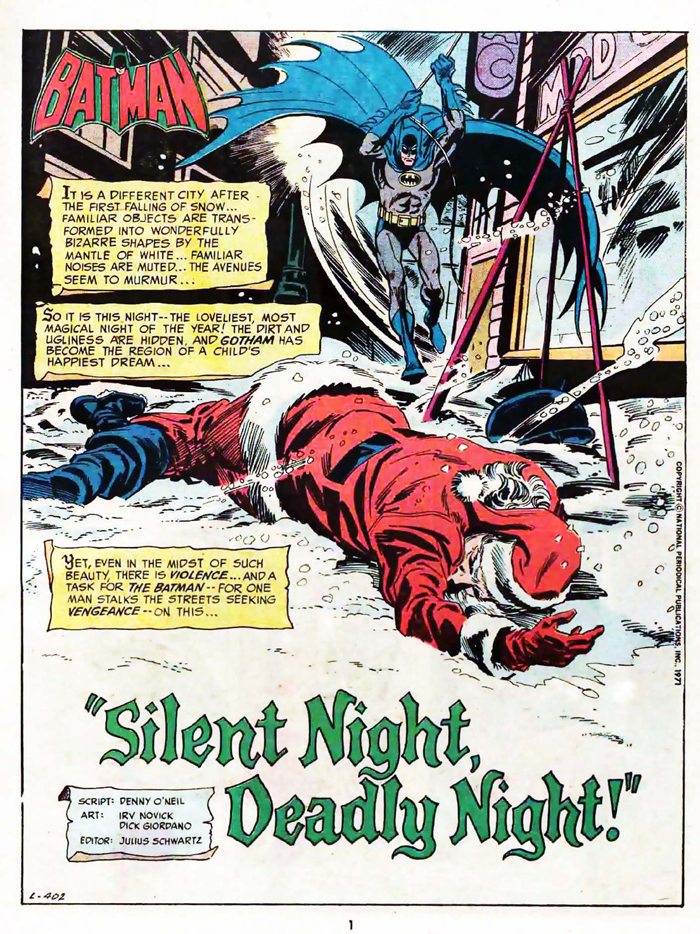 Batman eventually frees himself and gives chase, but only the intervention of what seems a holiday miracle (a sled led by some reindeer — no, not Rudolph) allows Batman and his young charge to escape freezing to death in the snow. After the man comes to his senses, they take the sled to the nearest hospital where the old man is saved from a heart attack.

Batman promises that the Wayne Foundation will look into getting the man a job, which he is deeply grateful for, promising to turn over a new leaf. When Batman comes out of the hospital, the reindeer and sled are gone! The story ends with Batman facing skyward, surprisingly open to the idea of a “Christmas miracle.”

Next up is Billy Batson’s X-Mas, by Otto Binder and Pete Costanza, from Captain Marvel Adventures #69. This quick little holiday tale has Billy Batson trying to figure out how he and his alter ego, Captain Marvel, can be in two different places at the same time to spread Christmas cheer. Like a lot of Golden Age stories, it manages to cram more story in its seven pages than most comics do now in an entire trade paperback! 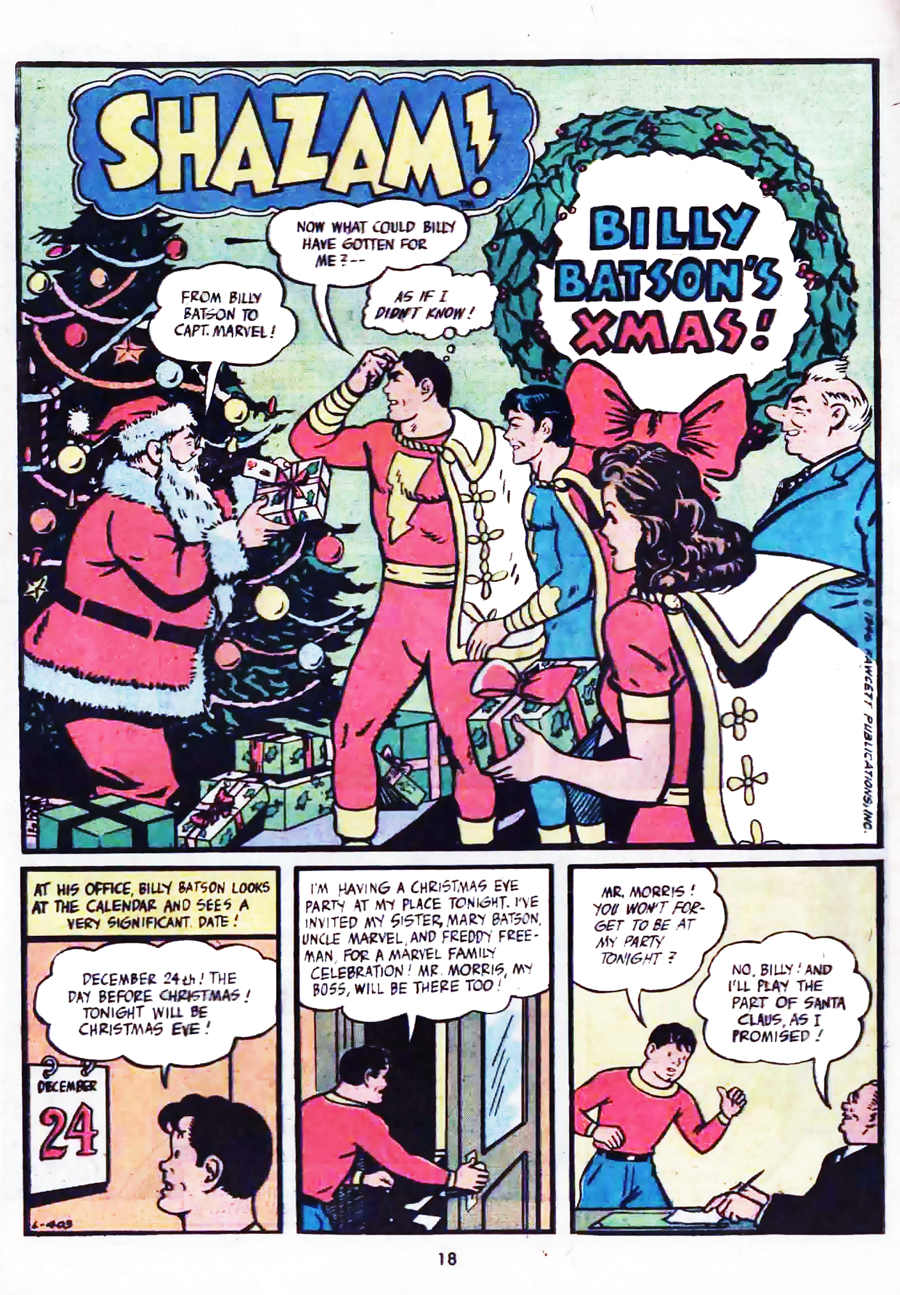 Third is an Angel and the Ape story, The $500,000 Doll Caper. This story is presented as being “new,” in that it was most likely produced for an issue of the 1960s series but never published. In it, Angel and her simian pal get involved in a plot to smuggle diamonds inside toy dolls. Drawn by the incomparable team of Bob Oksner and Wally Wood, it’s utter silliness done in high style, complete with a mobster dressed as a baby and a Frankenstein character named Boing. (Strangely, this story or Angel and the Ape are not mentioned or pictured on the cover.) 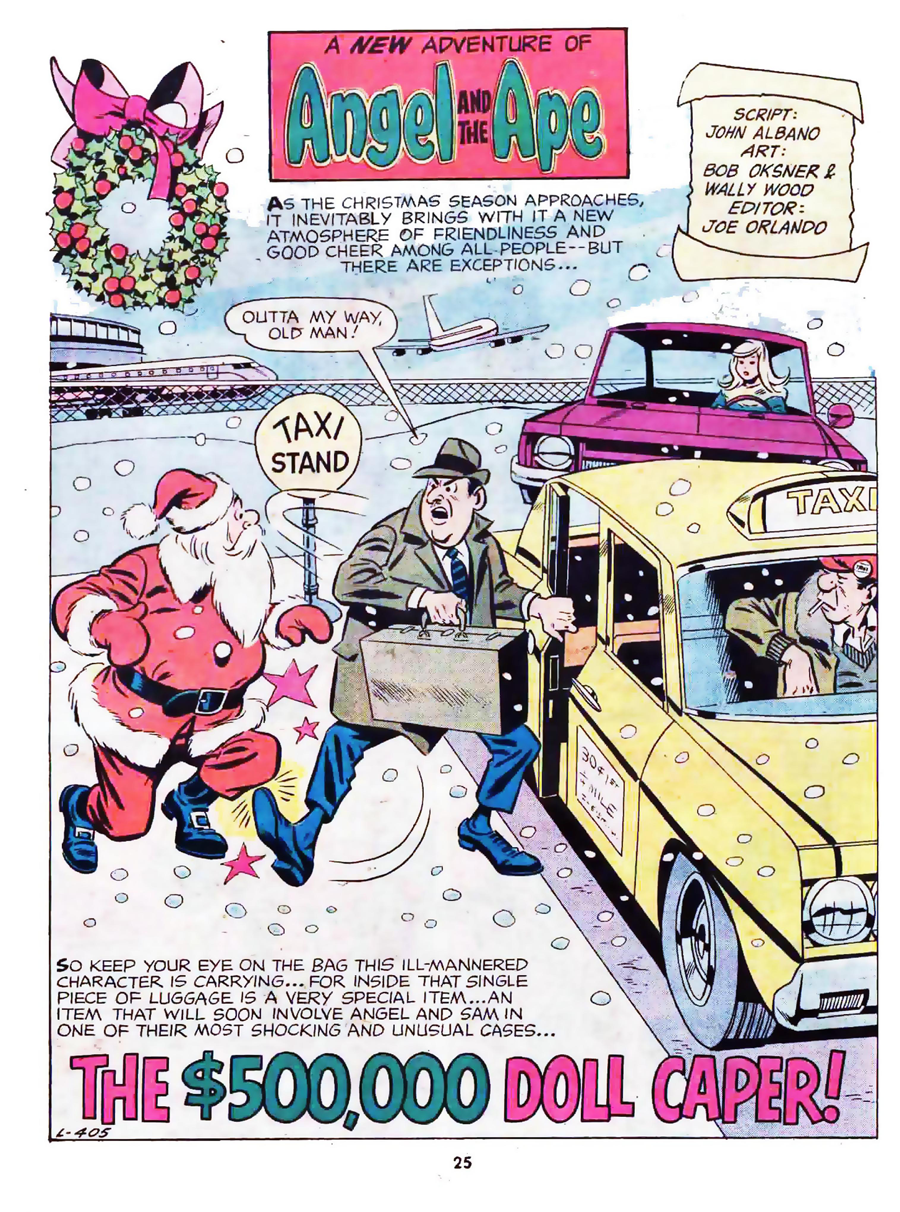 In the book’s centerfold, DC offers us a Super-Hero Calendar for 1975, festooned with stock art poses of some of their most beloved characters. I am waiting until the days line up again so I can print this out and use it! 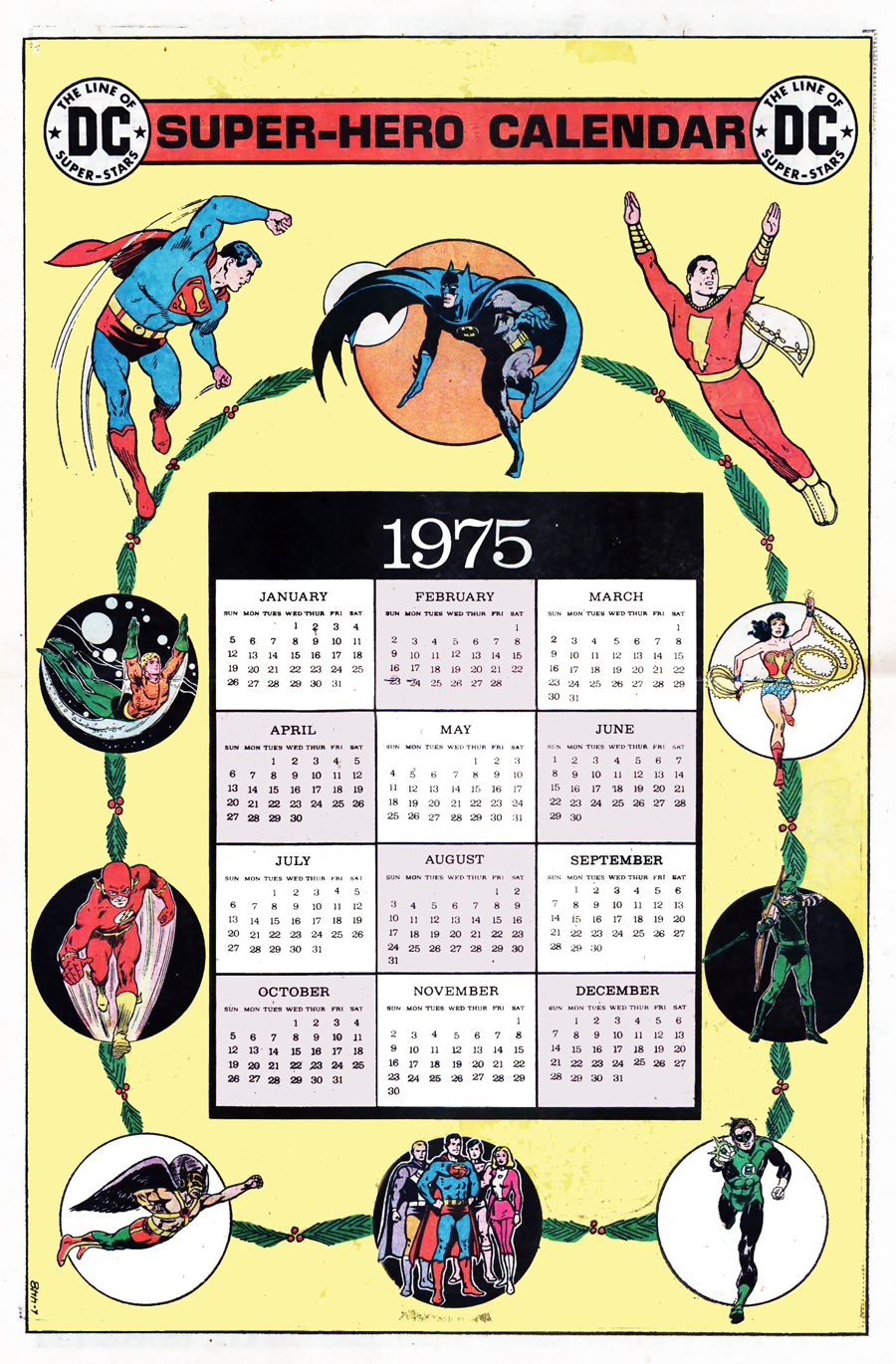 OK, kids, take your scissors to your computer screen and cut carefully …

The classic A Swingin’ Christmas Carol, by Bob Haney and Nick Cardy, from Teen Titans #13, comes next, a story DC never tired of reprinting (it has appeared in treasuries, digests, trade paperbacks, plus other Christmas collections). Featuring an incomparable art job by Cardy, it retells the Scrooge story but with all the characters fully aware they’re living out the story. One odd detail: The original version features a page where the Titans are seen reading comic books starring their mentors! This page was always deleted when reprinted in the ’70s and ’80s, and that’s the case here. That minor omission aside, Cardy’s work here really benefits from being seen at this larger size, to better appreciate the beautiful line work. 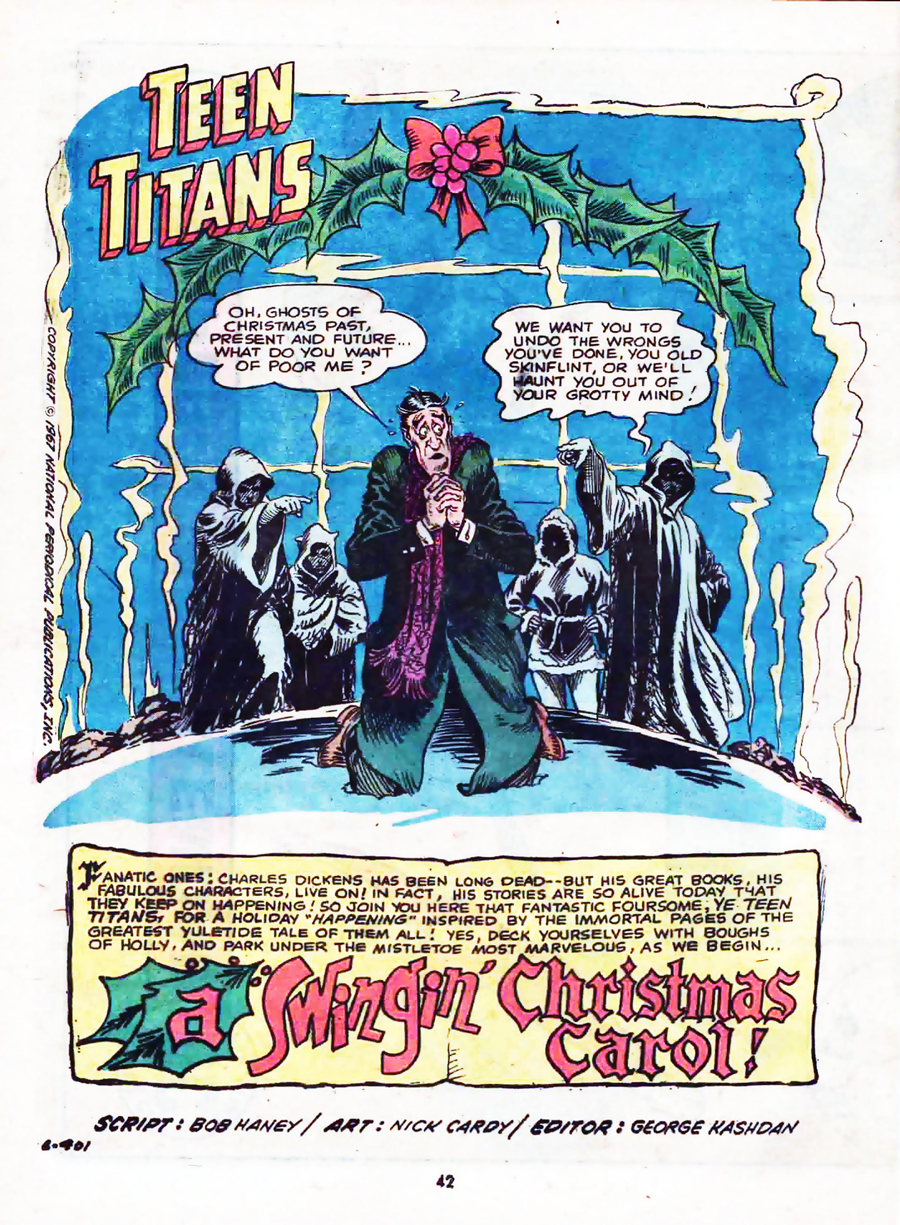 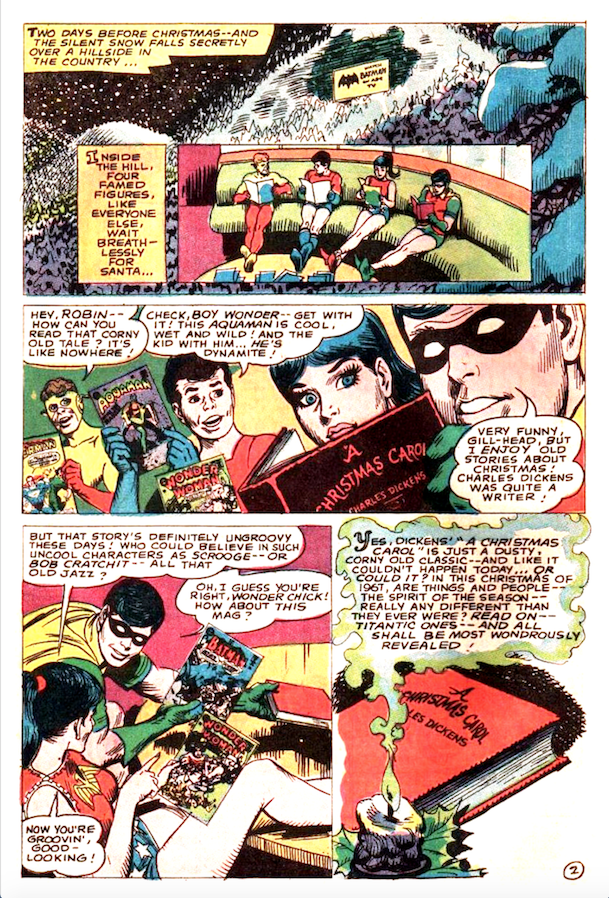 In the final story, Christmastown, U.S.A., by Alvin Schwartz and Win Mortimer, from Action Comics #141, Perry White assigns Clark and Lois to cover a town’s yearly Christmas pageant (slow news cycle). A flood hits the valley, but that doesn’t stop the Man of Steel from building a giant ark and turning it into a floating Christmas miracle. Eagle-eyed readers will no doubt notice that there’s been a lot of redrawing done to this story, possibly to make it look more contemporary. 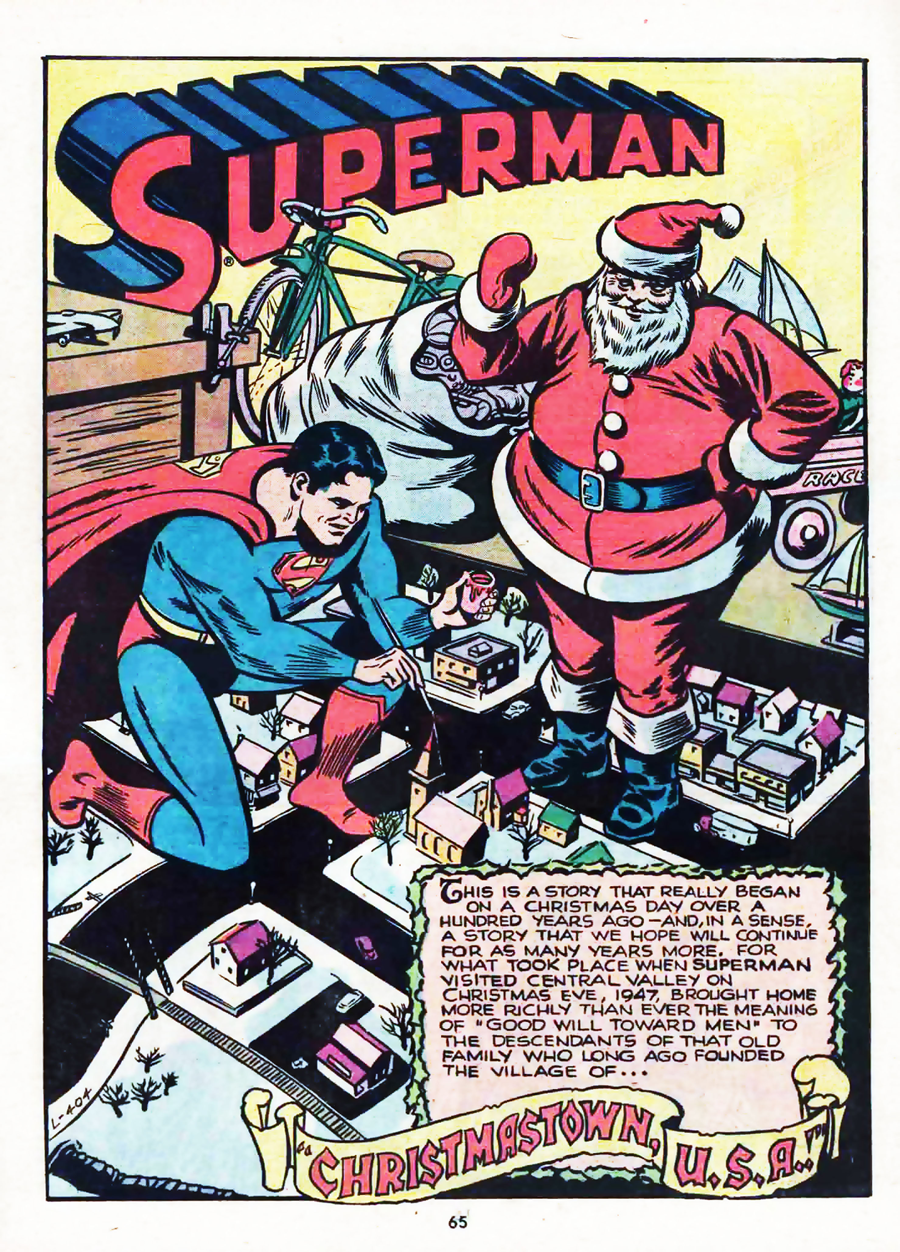 With a couple pages left to fill, DC threw in some festive bonus features: a page of black-and-white art by Sheldon Mayer where you could fill in the dialogue yourself (otherwise known as Marvel Style); a Santa Claus-based puzzle; plus some Christmas cards featuring DC heroes you were supposed to cut out and glue onto cardboard. Even though this comic cost a buck — a full four times the cost of a regular comic — DC obviously didn’t think that these books were truly “Collectors’ Editions,” otherwise they wouldn’t have been telling readers to draw in them and cut them up! 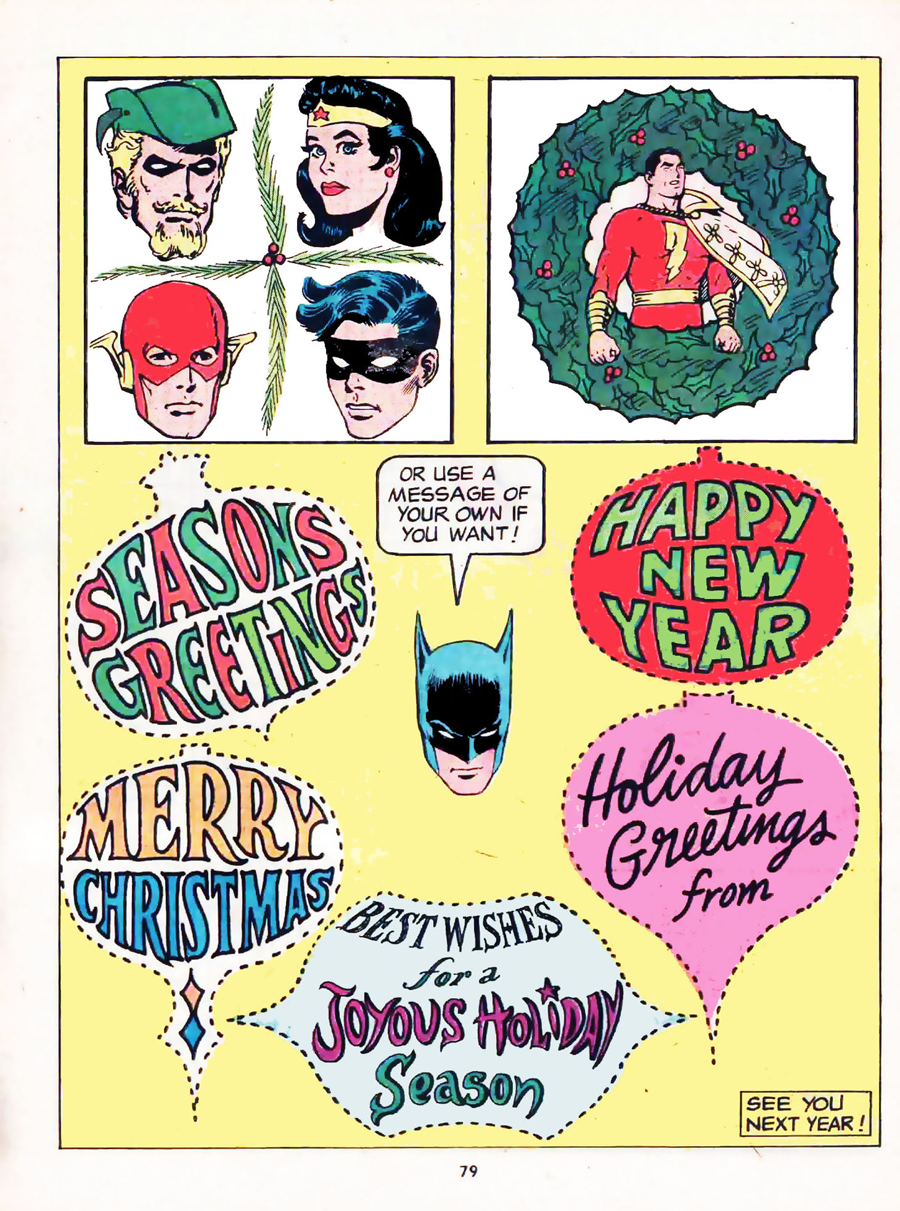 Christmas with the Super-Heroes wraps up on the inside cover, with a few thoughts about the holiday season from famous DC super-villains. As you might imagine, the Toyman and Captain Cold are generally the most positive… sort of.

There is some debate as to which company of the Big Two did the best Christmas collections: DC or Marvel. Marvel didn’t worry about running only Christmas-themed stories, which allowed them greater latitude when picking the best, most exciting stories to package at the tabloid size. DC — as you can see with this book—stuck with holiday stories only. While that might make for a more thematically coherent collection, it probably forced the editors to pick certain stories based on more mundane criteria, like page count or if they had the original black-and-white art to reprint.

You can still find the first Christmas with the Super-Heroes collection relatively cheaply, if you’re not picky about condition. And you shouldn’t be, because these books are for reading and savoring and lending, not to slab. Pick up a copy for yourself or someone else; it’ll make a great gift, any time of year.

If you want to hear more about this book, check out the Dec. 24 episode of TreasuryCast, part of The Fire and Water Podcast Network!

PLUS! Check out Rob’s other SUPER-STAR HOLIDAY SPECIAL entry — on the Heroes World catalogues of the ’70s! Click here!