Dark Horse Editor-in-Chief Scott Allie has been an important part of Hellboy’s success. Here, in a special MIGHTY Q&A, he talks about his work with creator Mike Mignola and his views on the Hellboy universe. PLUS! EXCLUSIVE pencil art from May’s ABE SAPIEN #12 by Max Fiumara!

Describe your collaboration with Mike Mignola and what’s made it so successful.

He has a really strong vision that I can get behind—anybody could get behind this vision. But it’s really meant a lot to me over the years, and it’s been easy to place the focus of my career in making these comics work the way Mike wants them to.

Where do you see Hellboy’s place in the comics firmament? How has it changed comics?

Well, Mike’s art has changed comics pretty massively, by inspiring everyone from Jim Lee to (Joe) Quesada to Duncan Fegredo and Gabriel Ba. Comics look differently than they would have had Mike never come along. Not that he’s without his own influences — he’s got great influences. But he casts a long shadow.

Hellboy is a unique achievement in the world of creator-owned comics. Started like any other creator-owned book, one guy doing his thing, and I think the important thing is that he kept doing it like that for a long time. It was seven years before we did something significant that wasn’t all Mike. He laid down incredibly rich ground, pretty much all by himself, for a very long time. Then he’s been selecting the right people to work with ever since, whether we’re talking about Dave Stewart or Duncan or me or (John) Arcudi.

I don’t think anyone has ever built or managed anything like what Mike’s done with these books. And there’ll come a day when we end it, and then we’ll have really done something unprecedented. 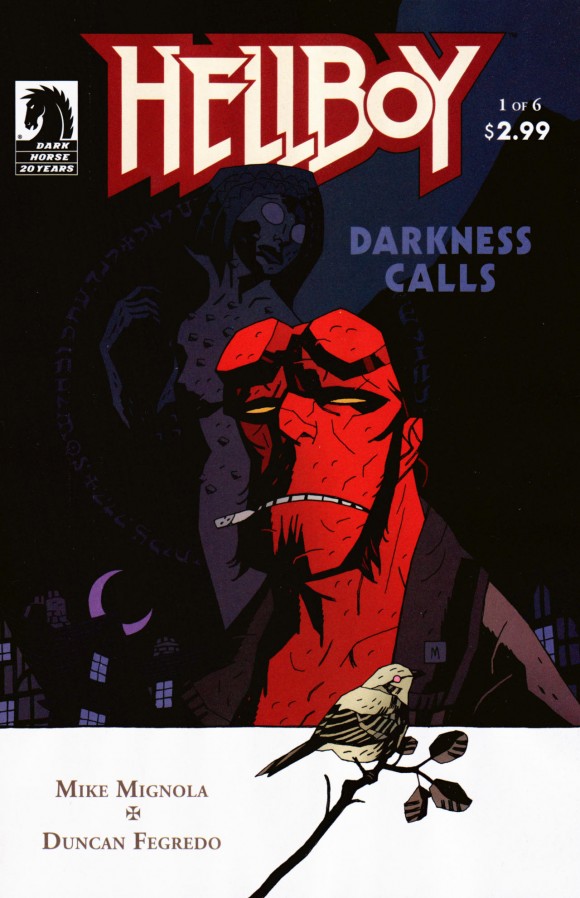 As a writer and editor you’ve had a lot to do with the Hellboy universe. Which of the supporting characters is your favorite?

If there was ever any doubt, it’s certainly Abe now. I’ve gotten myself so far inside that guy’s head, I love him like a brother. But he is the best character. He’s as good a design as Hellboy, and that is saying something. Or I should say, he was as good a design as Hellboy, and now he’s redesigned completely and he’s still as good a design as Hellboy. I remember when we had done all the prep work, and we had the redesign for Abe, we knew exactly what he’d look like when he came out of that jar, and Mike — who of course had done the bulk of the redesign — was like, ‘Wait, we’re gonna throw away that design …?’ The original design was so good! But that’s part of what makes these books as good as they are … in, you know, my humble opinion. We take chances, we change things, we let Roger actually stay dead, Hellboy loses an eye and it doesn’t come back, and we toss out one of the best character designs of all time because we know we can move on without it. It is very easy to be confident in these books because Mike is a pretty talented guy. 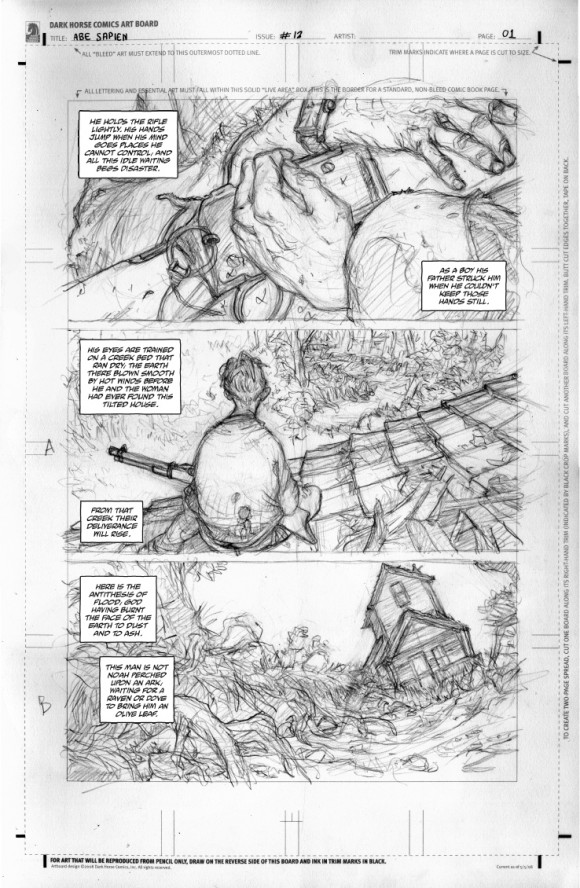 How has your involvement with Hellboy influenced your writing on other projects?

So very much of what I know about telling a story, about telling a story with pictures, about colors, about covers, about everything that goes into making a comic, I’ve learned from Mike. Quite a bit from Joss Whedon, from Craig Russell, some from Kurt Busiek, some other guys I’ve worked with. But working with Mike has been a huge influence. Now, it’s not like I walked into Mr. Mignola’s parlor a blank slate. Part of why we worked well together from the start was that we were coming from some of the same places, we had the same influences. But working with Mike helped me bring out the best of those influences, I think.

What decision have you made while working in the Hellboy universe do you wish you could take back?

There are a couple hires I regret, but very few given how long we’ve been at it. There was one time I gave Mike a hard time about his deadlines, and the way I did it — at the guidance of a more senior editor — was truly stupid, and truly regrettable. I’ve made him mad other times and it was inevitable, or I don’t regret what I did, but that one time long ago … you learn from your mistakes, and that helped me learn how to talk to freelancers. 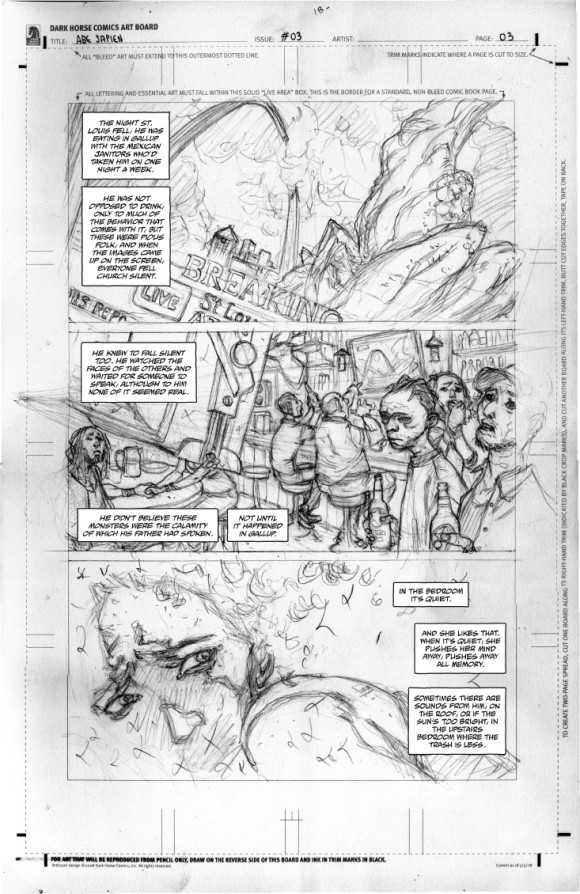 If you were to recommend a Hellboy story for a neophyte, which would it be?

Depends on the neophyte. If you’re really steeped in superhero comics, if that’s your thing, start with earlier Hellboy, like Wake the Devil. It’ll be an easier transition. If you like fantasy I’d say start with Darkness Calls and go through Wild Hunt and The Storm & the Fury — it’s still a quicker read than one volume of “Game of Thrones.” But if you like weird shit that you’ve never seen before — and this would be how I’d start — check out Hellboy in Hell. This is what Mike’s been building toward his whole life. This is the closest thing — I think — to what he originally wanted to do, minus all the things he thought you had to do for a good genre story. But read any one of these, and then you’ll want to go back to the first one. 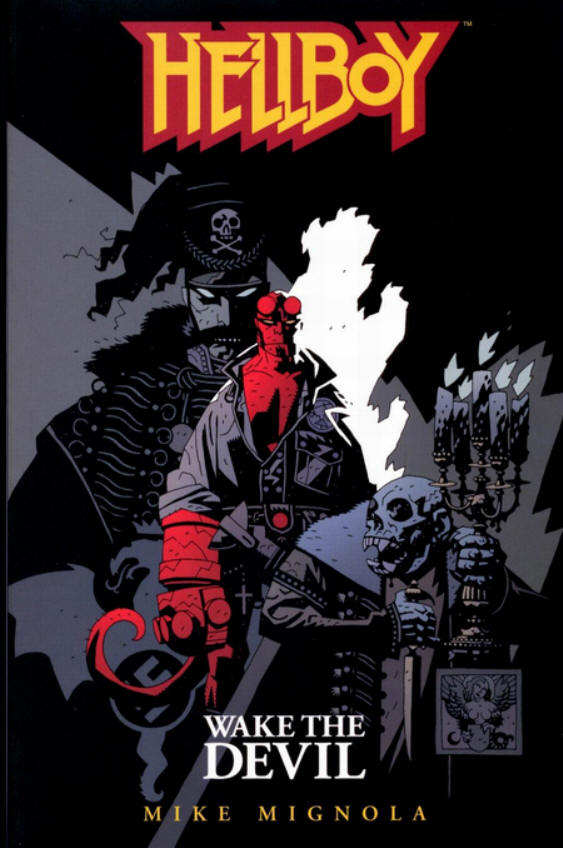