BATMAN’S HOT-LINE: A Journey to Feed Your Bat-Soul

A visit to the Batcopter makes for a special day.

Why do I do this? Very simple. There are few things in life more fun and rewarding than throwing yourself headlong into something you love.

For me, it’s not just comics, it’s the world that comes with them. And of course, that means Batman’s world. And, a lot of the time, more specifically, the world of Batman ’66.

Which is why I went to the Meadowlands in New Jersey yesterday — which plug, plug, coincidentally is the site of 13th Dimension’s East Coast Comicon next April — to see the one, true Batcopter. 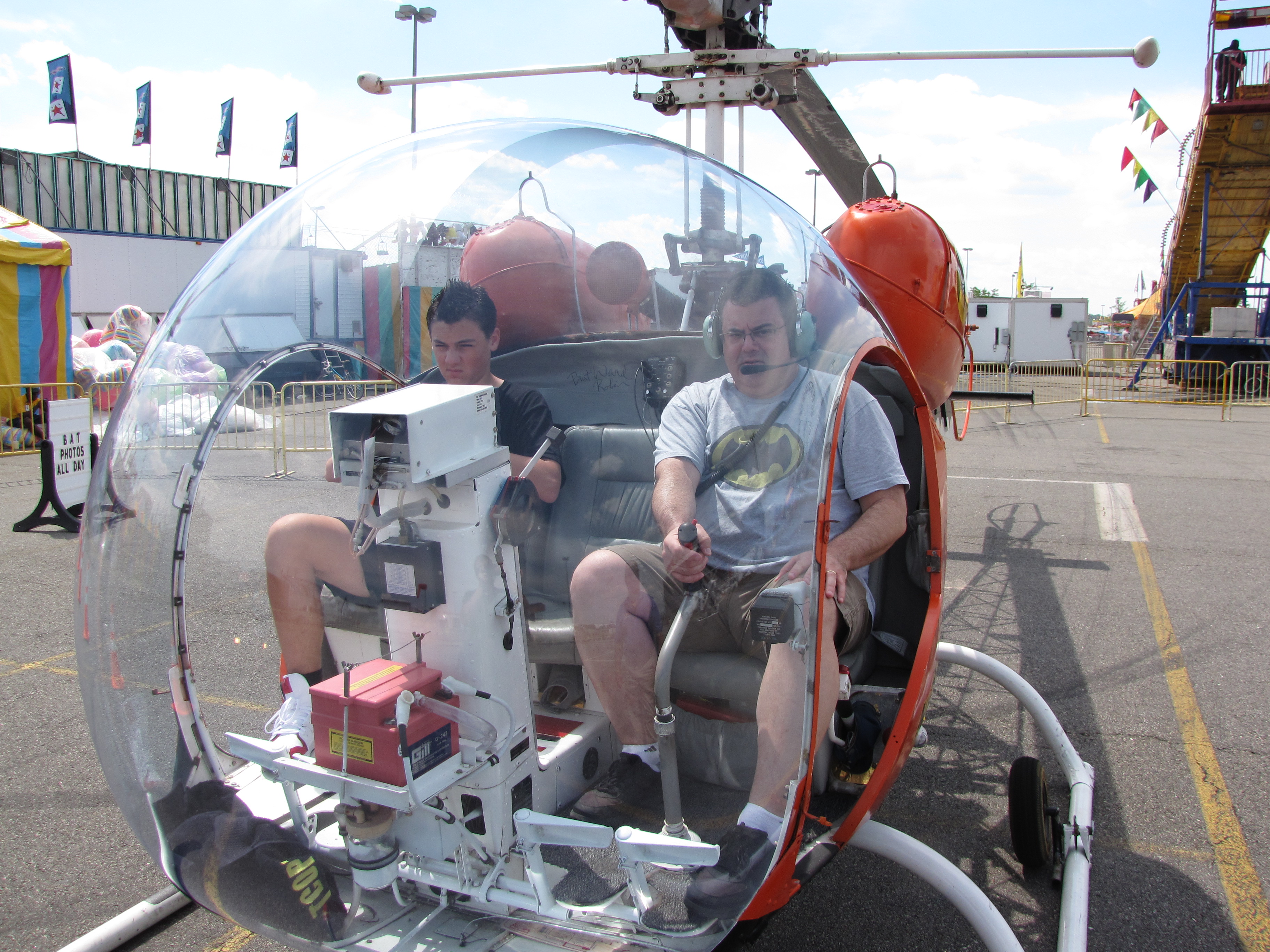 Getting our game faces on to battle evildoers!

Last year, I paid Gene and his Batcrew a visit at the State Fair Meadowlands so I could take a flight — I’d never even flown in a helicopter before — but weather kept us from going up. Didn’t matter. Seeing the autographs of people who’d ridden in it, like Adam West and Julie Newmar, and being able to sit in the cockpit with my son, Sam, my own sidekick, made it all worthwhile.

So when Gene and his Battourage told me they’d be back at the fair this year, I naturally had to go. This time, I brought not only my wife Wendy and Sam, but also my sister Paula and niece Lindsay. 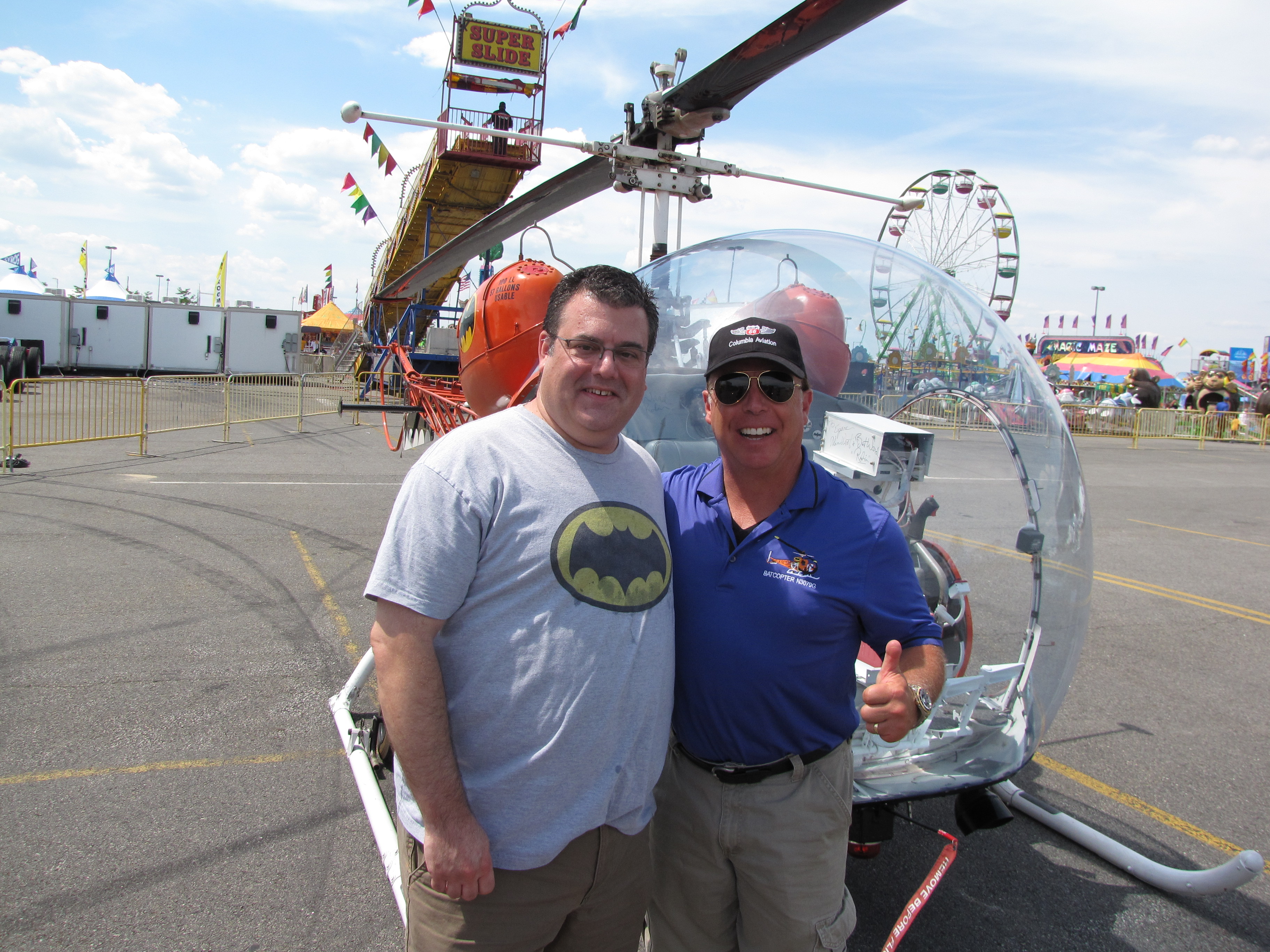 Me and Capt. Eugene Nock

Unfortunately, bad luck struck twice. The Batcopter wasn’t able to go up yesterday because of an issue with a part and when you’re dealing with aircraft, you do not want to mess around. So no flight again this year.

But, I’m gonna tell you something. It didn’t matter. I got to check out the Batcopter a second time, sit in it, bask in it. And Gene had a second copter with him, of the same vintage. So sit inside, you wouldn’t know the difference.

Anyway, next thing I know, I’m up in the air and it was glorious. I whistled the Batcopter theme — partly to keep myself calm next to a wide-open door — as we circled the Meadowlands, getting a spectacular look at the skyline of the real Gotham City — New York — in the process. 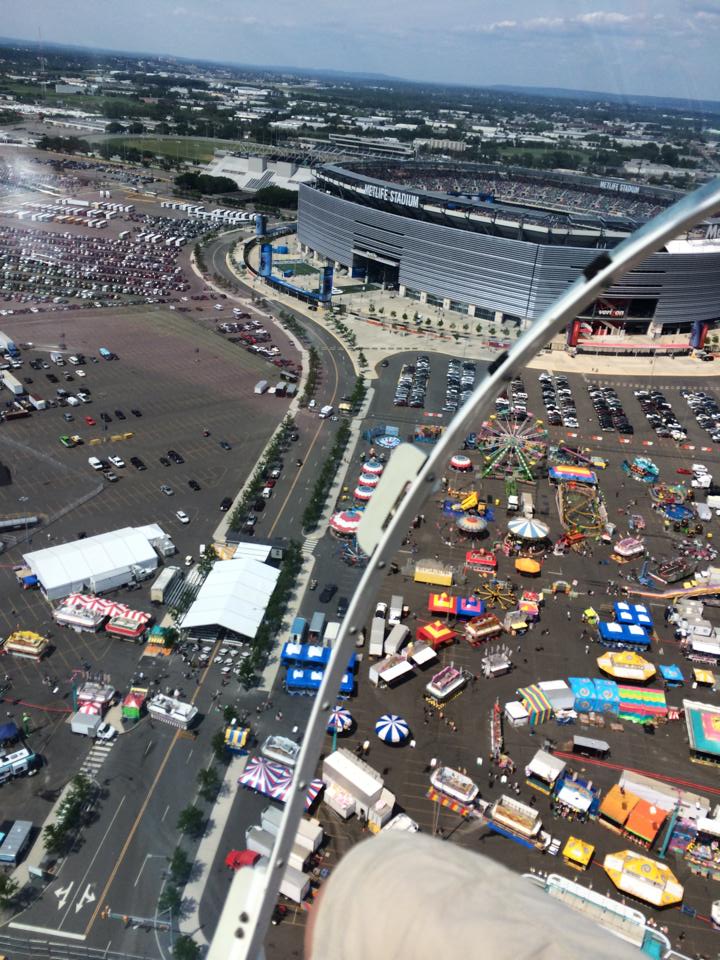 The view from above Gotham MetLife Stadium, across from Gotham West River in New Guernsey.

The trip was over too soon. What was great was that Gene was doing gangbuster business all day. People came, checked out the Batcopter, went up in its stablemate, and came out grinning like kids in front of the TV, watching Batman hang from a ladder with his shark repellent Batspray.

One of these days, I’ll go up in the Batcopter itself. In the meantime, being there with my family, seeing them all get to take the ride, was absolutely the next best thing.

The Batcopter will be at the State Fair Meadowlands through July 6. The Batcopter could be flying again this week, so by all means go. And even if it’s not, go anyway. You’ll have a blast checking it out and riding in the other craft. Trust me. It was a fantastic Batday.