The latest BATMAN ’66 bust to come from Diamond Select is David Wayne’s Mad Hatter, one of my fave villains from the series. 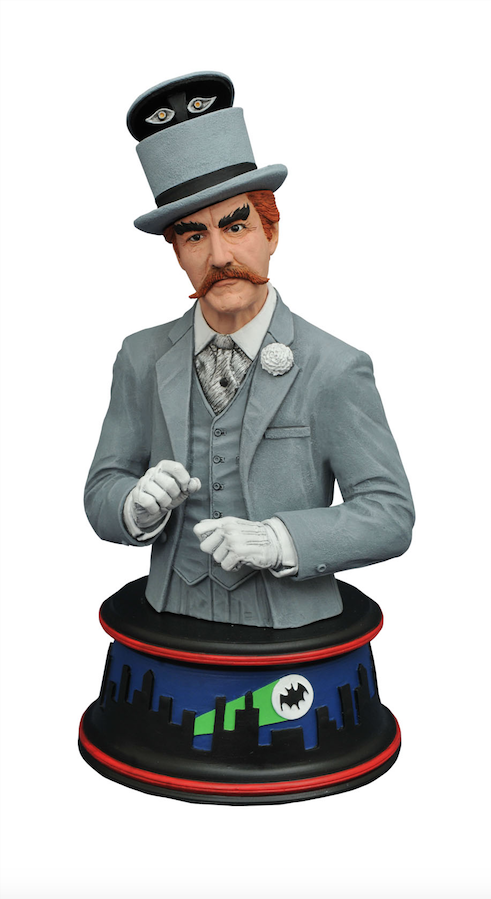 But, hey, I can live with the two fun episodes we got. (One of them made our Top 13 Batman ’66 Episode Countdown, in fact. Click here to find out which.)

The bust, which will retail in the $60 range, is expected to be solicited in the next Previews catalogue at the end of August.

It debuted at San Diego Comic-Con but this is your first up-close look — thanks to these official prototype pix provided by Diamond Select.

And, as we often do, we’ve got designer Barry Bradfield and sculptor Jean St. Jean here to discuss it: 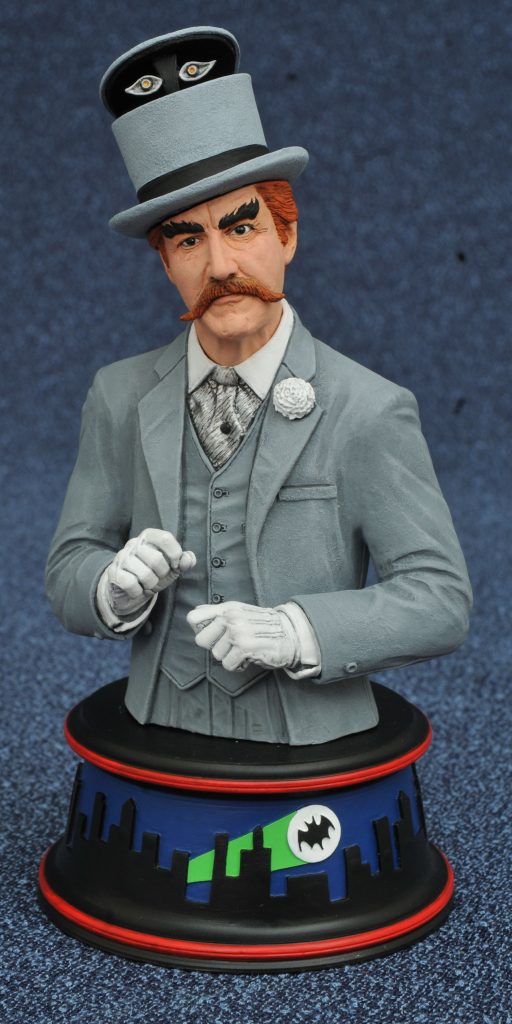 Dan Greenfield: This is one of the best likenesses of the whole bust series. Tell me about putting this together.

Barry Bradfield: I think it helps that Hatter’s got these great features that make him fun to look at. Those eyebrows and that mustache really bring something to the character.  He was actually pretty straightforward to work on when designing him because of that. I actually drew the mustache first before anything else, which is not a normal way to start a drawing. 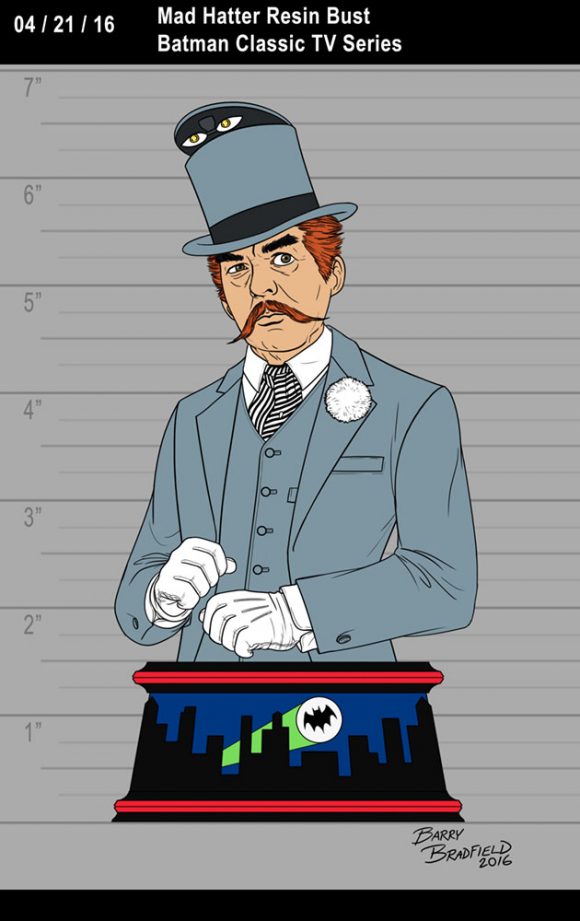 Like a lot of the great villains, Hatter’s got such great body language that makes him stand out as well. I wanted to capture that in his arms, because he’s often holding them in odd poses. I feel that he’s got an awkward grace about his movement that goes underappreciated compared to the other villains.

Jean St. Jean: Mad Hatter was deceptively simple; basically, he’s just a guy in formal wear with a crazy mustache. He’s very understated compared to his comic book counterpart with a formal stiff bearing. I tried to capture the set of his shoulders and posture, the dismissive way his head is slightly cocked and his obvious focus on his hat gizmo as he affects someone’s free will. 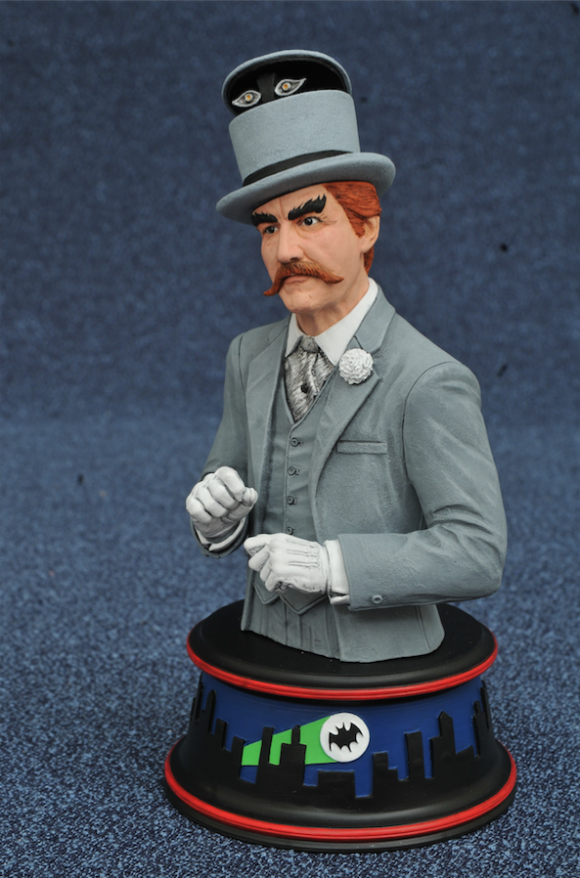 Dan: Mad Hatter is one of my faves of all the villains, a notch below the Big Four and Mr. Freeze. Where does he rank for you?

Jean: I always enjoyed the more bombastic villains so I would put the Hatter after, as you say, the Big Four and Freeze, of course.

Barry: I think maybe about the same for me. Like Freeze, I think he’s only below the Big Four because of the amount of episodes he’s in. If both were in a few more, I’d be calling them the Big Six. He’s always much more wonderful than I remember him to be once I’m actually watching one of his episodes. It’s odd, but I love how he pronounces “hat factory.” It’s the little things… 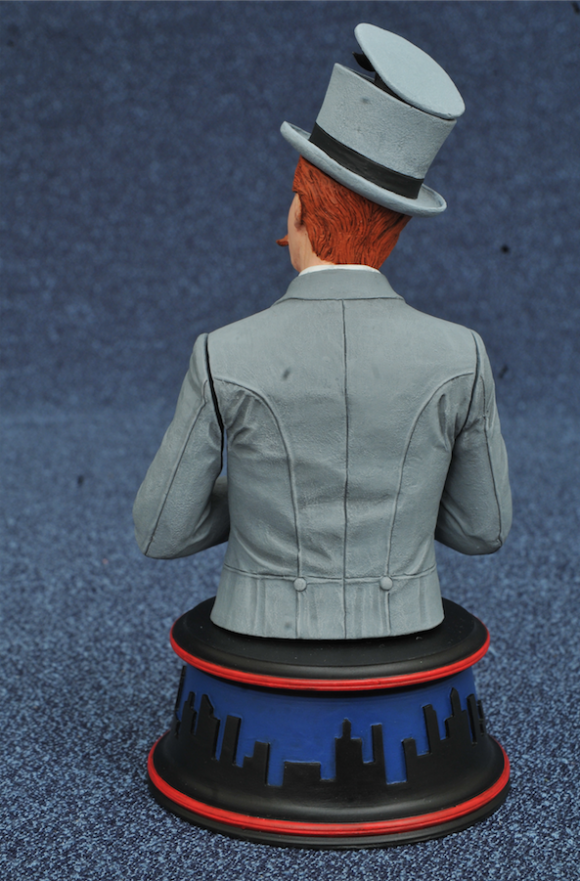 Dan: Does this mean we’ll get a Batman bust with a pink cowl?

Jean: I can only hope! How do you not pay homage to probably the most ridiculous moment in the whole series, the Dark Knight in pink?

Barry: That would be quite the complementary variant! If people are interested, speak up and write into DST! 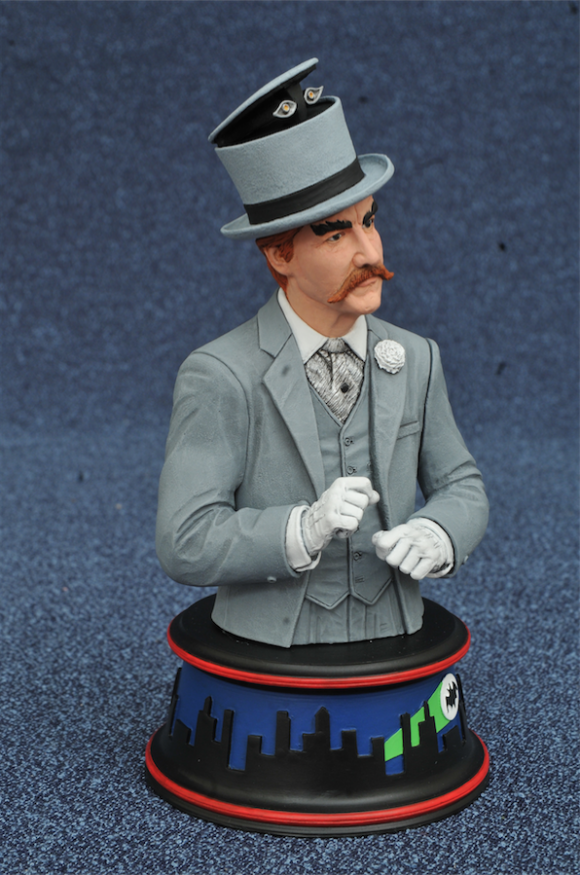