CAPTAIN ACTION WEEK: How Ideal’s popular toy series made its way onto the printed page…

Before 1968, DC Comics’ track record with licensed comics was extensive… when it came to celebrities (Bob Hope, Jerry Lewis, Alan Ladd [ask your grandparents]), TV shows (The Adventures of Ozzie and Harriet, Sgt. Bilko, The Many Loves of Dobie Gillis), fading cowboy stars (Hopalong Cassidy, Dale Evans) or obscure cartoon characters (The Fox and the Crow).

But comics based on toys? No publisher was doing that. Partly, I’m sure, because no one had any idea what a Slinky or Hula Hoop comic would even look like, but mostly because action figures — the most obvious candidates for comic book adventures — were a relatively new sensation. 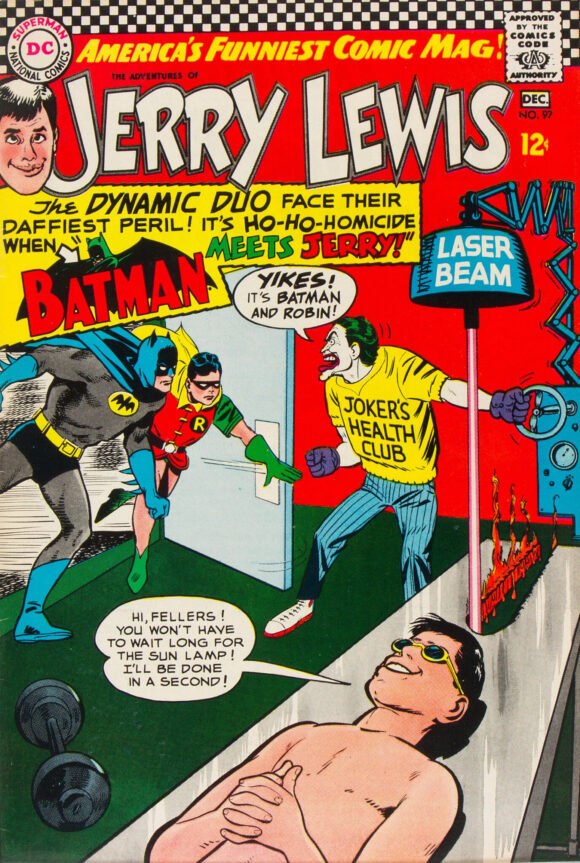 DC had dabbled in 1965 by hastily throwing a bunch of reprints together to comprise two issues of a Showcase Presents G.I. Joe comic, but taking a close look at it now, even though Hasbro Toys’ signature soldier was advertised within, judging by the lack of the trademark G.I. Joe logo, I’m not 100 percent convinced it’s an officially licensed product as opposed to a quick cash-grab.

It wasn’t until 1968 that DC took the unusual step of publishing its first all-new toy-based series, kicking off a phenomenon that continues today with G.I. Joe, Transformers, My Little Pony and countless other licensed books.

Captain Action was the centerpiece to a line of toys from Ideal, who copied the Barbie formula (buy one doll but spend a fortune on outfits) by introducing a hero and sidekick who could be dressed in over a dozen disguises representing the most popular comics and newspaper strip champions of the day, from Batman and Robin to Spider-Man to Steve Canyon and Flash Gordon. 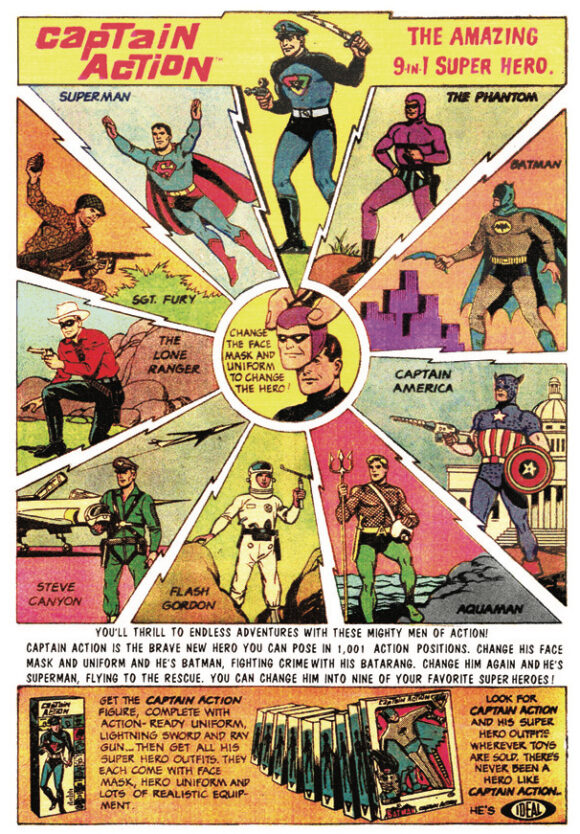 Piggybacking off the national craze for superheroes that the Adam West Batman show had sparked, Ideal Toys’ line sold well enough to get closer attention from one of its licensors, DC Comics, who elected for the first time ever to launch a comic based on a plaything.

This wasn’t a slapdash endeavor. The series was assigned to one of DC’s top editors, Mort Weisinger, who’d been actively guiding the Superman line since the 1950s. Weisinger then brought in who he considered his top writer, the teenage whiz kid Jim Shooter. Weisinger’s choice of artist, though, while terrific, was really odd for him; back in those days, DC editors had their individual stables of pencilers and inkers that they didn’t like diluting or sharing with their officemates. Weisinger had never worked with the great Wally Wood, who — outside of inking a short Gil Kane story in 1963 — hadn’t done anything at DC for nearly a decade. Regardless, whether by Mort’s choice or thanks to a strongarm interjection by artist-publisher Carmine Infantino, Wood worked wonders.

Obviously, DC felt that simply having Captain Action dress up as their other superheroes issue after issue wasn’t a feasible plan. (Why read a comic about a guy disguised as Batman rather than an actual issue of Batman?) Together, Weisinger and Shooter came up with a new source of power for Captain Action and Action Boy in the form of a giant treasure chest filled with magical coins, each imbued with a different super-ability by one of the ancient gods of myth. 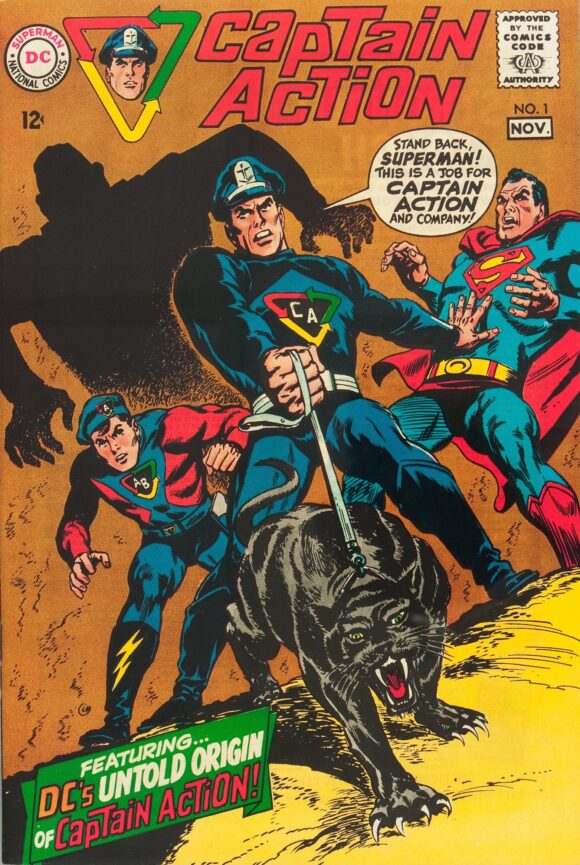 Unfortunately for Wood and Shooter, before final sales figures could even come in on those first two issues, management moved the series over to editor Julius Schwartz’s office. We’ll never know why, though my best guess is that initial sales were weak and Schwartz was DC’s go-to editor for turning around slow-selling titles. Speaking again to the closed-off nature of DC’s fiefdoms, Schwartz kept Wood on to ink Issues #3 and #5 only, but he otherwise cleaned house, handing the script and art duties to his Green Lantern and Atom artist, Gil Kane.

Immediately, Kane reconfigured the book’s foundations. He dispensed with the convenience that Captain Action and his sidekick could tap into dozens of different super-powers, instead reducing their collection of magic coins to two, one for each of them. Kane also shelved the villain Krellik for another toy from the Captain Action line — the grotesque Dr. Evil. Visually stunning, Kane’s three issues were every bit as strong as the first two.

Unfortunately for the series, Batman’s popularity waned as quickly as it waxed. The show was clearly limping through its final season like a racehorse headed for the glue factory, and the sudden crash of Batmania created an inescapable sales vortex as the public’s appetite for superheroes all but vanished overnight. 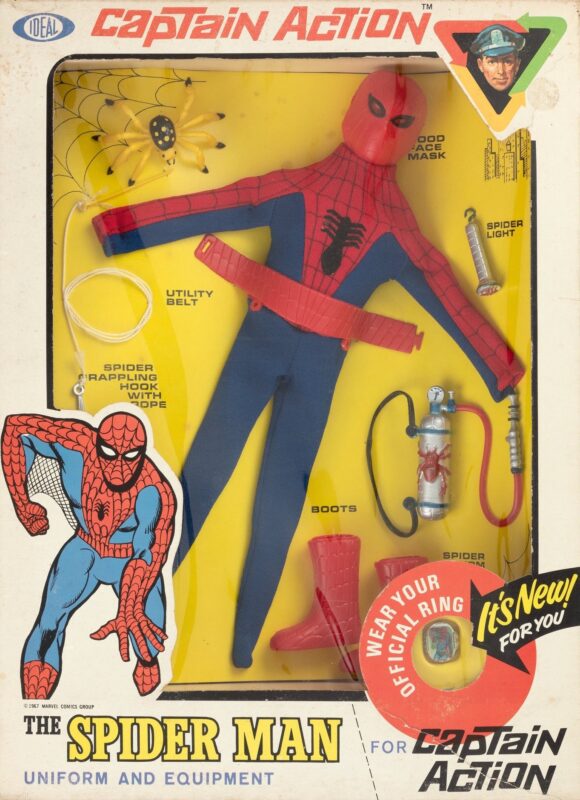 Every publisher of costumed crimebuster comics took a line-wide hit, as did Ideal Toys itself; kids weren’t just tired of the Caped Crusader, they were tired of superheroes across the board. By 1969, Ideal had discontinued the toy line, and without its tie-in merchandise, the comic had no outside support.

Publisher Infantino — already infamous for the speed at which he’d end new series that weren’t overnight juggernauts — canceled Captain Action with Issue #5, and the comics have never been reprinted until IDW’s new (and gorgeous) volume, on sale this week and highly recommended. 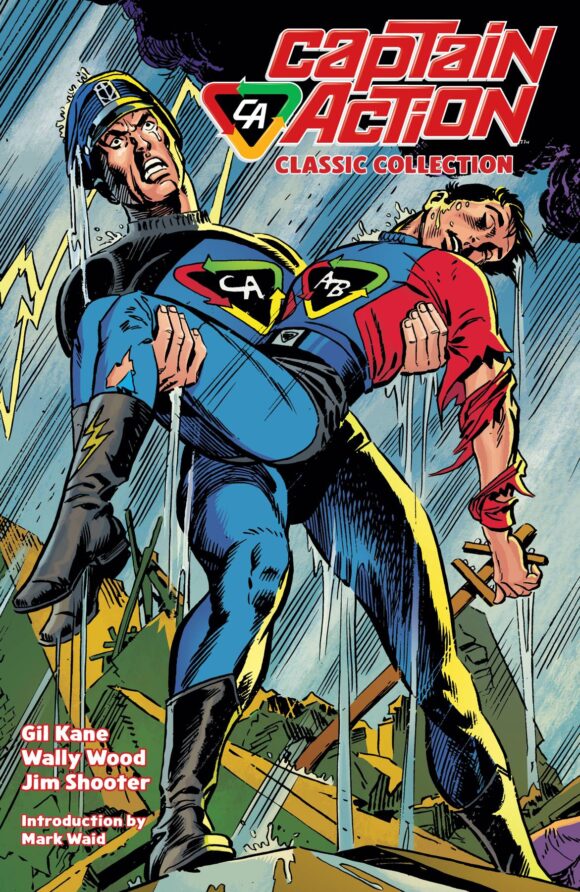 In fact, the Captain Action toy line lay dormant for decades until two “retropreneurs” acquired the license. Ed Catto and Joe Ahearn, who both loved Captain Action as boys, formed Captain Action Enterprises and struck a deal to successfully re-issue the Captain, Action Boy and Dr. Evil with a mix of old and new outfits.

Since 2005, along with Michael Polis, CAE has expanded the brand into novels, games and all-new comics series extending far beyond DC’s original five-issue run.

Will there be more Captain Action comics in the future? Only time will tell — but for now, I’m perfectly content to wallow in what we’ve got. 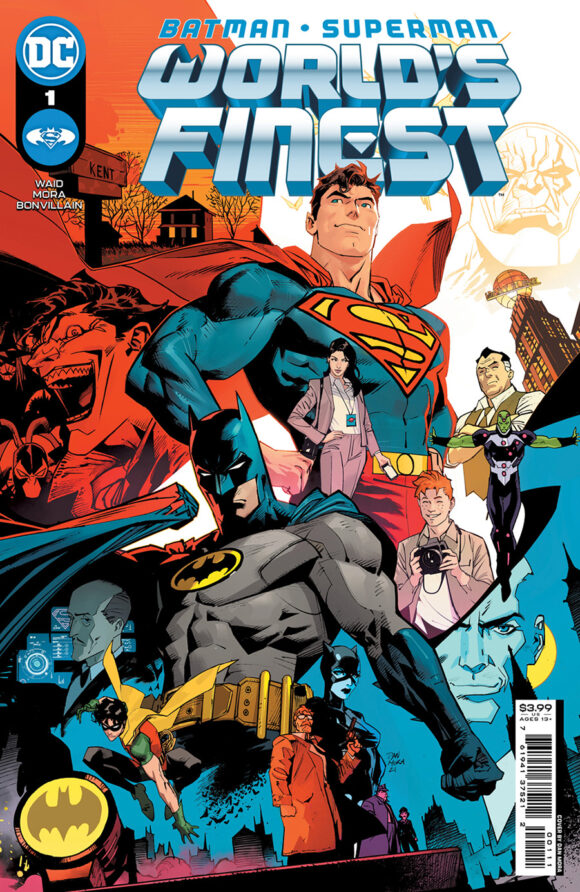