A BIRTHDAY SALUTE: The legendary funnyman was born 119 years ago… 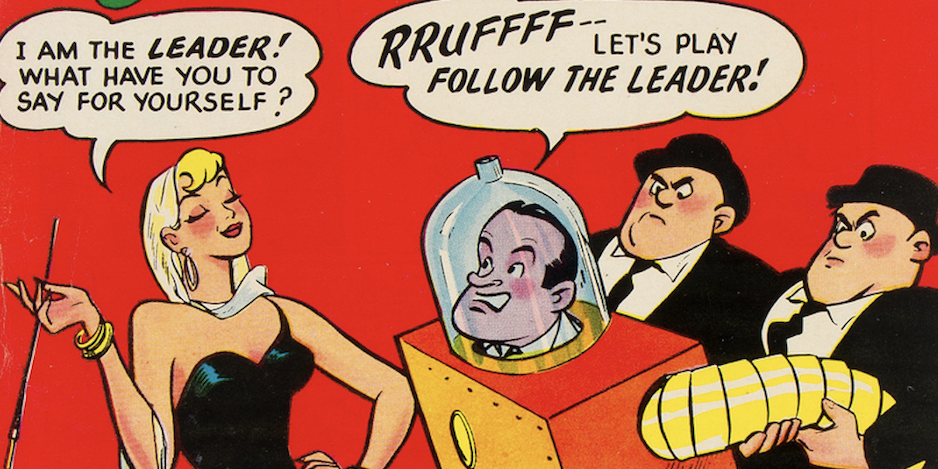 Bob Hope (May 29, 1903 – July 27, 2003) may have ended his nearly 80-year career on stage, radio, and screens both big and small as something of a cliché, but long before he came to that, he managed to essentially invent modern stand-up comedy, become a Broadway star, command the movie box office for decades, and have the highest rated programs on both radio and television. 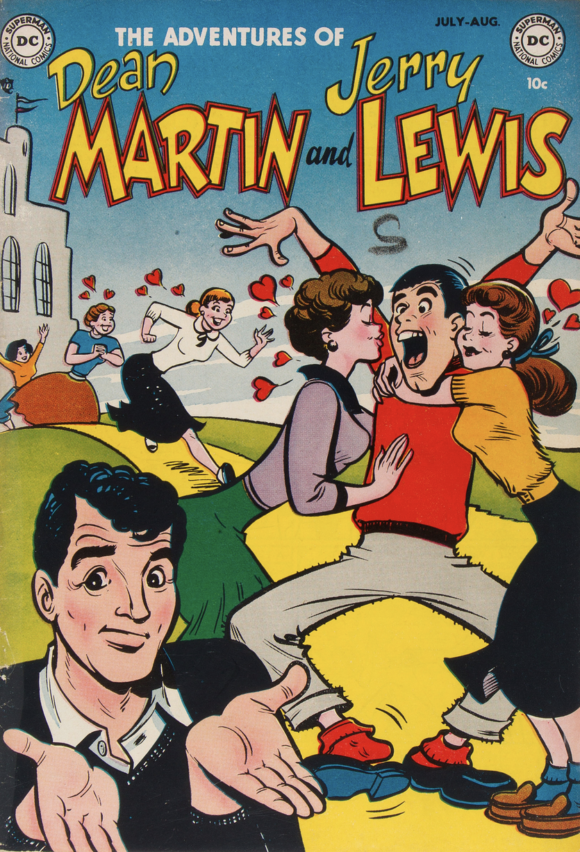 It’s a testimony to Hope’s popularity at the time that his title lasted as long as it did, especially when you consider that his act had never been for kids. Sure, his roles were broadly comedic enough that kids could get laughs from the physical humor in his earlier films, especially the Road pictures he did with Bing Crosby, but his humor was aimed strictly at the adults who got his double entendres and the significance of the comedian’s arched eyebrow and suggestive smirk. It also doesn’t surprise me that the book ended in 1968, just as Hope’s support of the political right wing and Richard Nixon’s Vietnam policies were becoming public issues, likely turning off the younger generation, who were the majority of comic book buyers.

Still, I’ve not come to bury Bob Hope (his wife Delores already took care of that; when she asked the nearly 100-year-old comedian on his deathbed where he wanted to be buried, he answered, “Surprise me.”) but to praise the adventures thereof.

Here then, MY 13 FAVORITE ADVENTURES OF BOB HOPE COVERS:

The Adventures of Bob Hope #9 (June/July 1951). The first four issues featured photo covers, using stills from Hope’s films, and the book featured three separate stories that all hung together, like three acts of a play. The stories are credited to writer Cal Howard and artist Owen Fitzgerald (who also provided the covers) and featured a version of the screen Bob Hope persona, the braggart woman-chaser with a spine of cardboard. By Issue #9, the cover formula was locked in, with gags usually tied to the story inside. The Adventures of Bob Hope #26 (August/September 1954). There seems to be a gap in the credits for this one, but whoever did it created a beautifully simple, well-executed gag that’s actually funny. 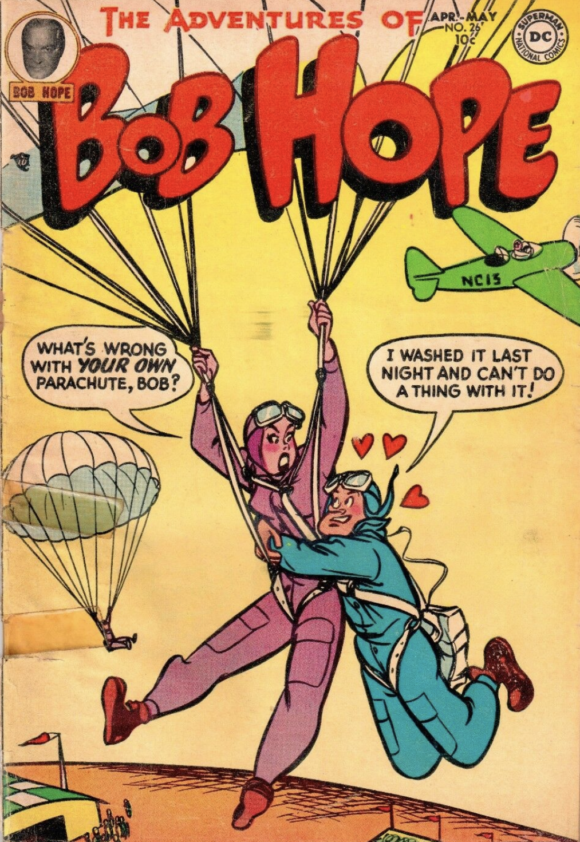 The Adventures of Bob Hope #33 (June/July 1955). It was the 1950s and if you could count on anything to appear on an issue of practically any DC title at practically any time, it was gorillas, this one of many monkeys to come, by Fitzgerald. “Or did Jerry Colonna just forget to comb his mustache again? But I wanna tell ya…!” 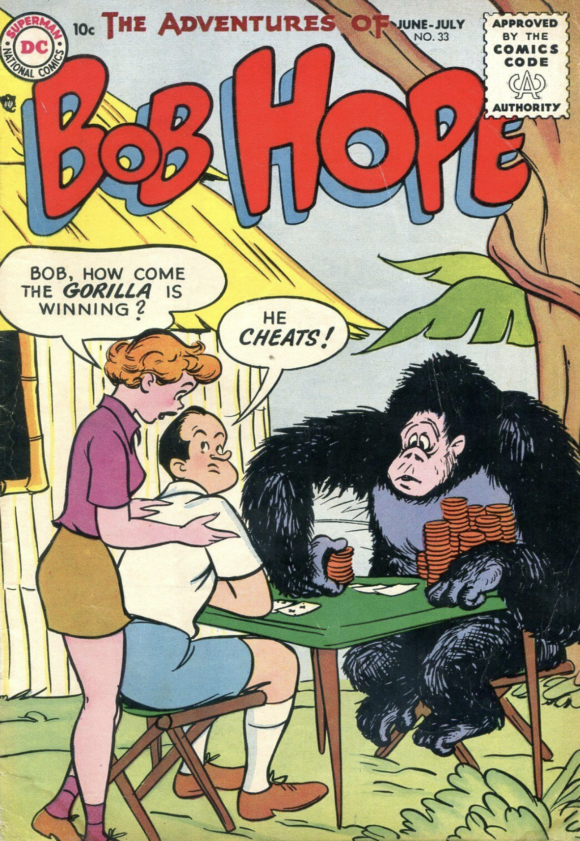 The Adventures of Bob Hope #50 (April/May 1958). “How about that Dorothy Lamour? Grrrrr!” In real life, Bob Hope’s relationships with women were, for the most part, one-sided and, uhm… singularly focused (The Secret Life of Bob Hope by Arthur Marx, if you care and can dig up a copy), but they played an important role to his screen persona as the swaggering braggart who acts like god’s gift to women but who turns and runs at the first sign of trouble. Fitzgerald was good at portraying both Bob’s arrogance and women who disdained him. 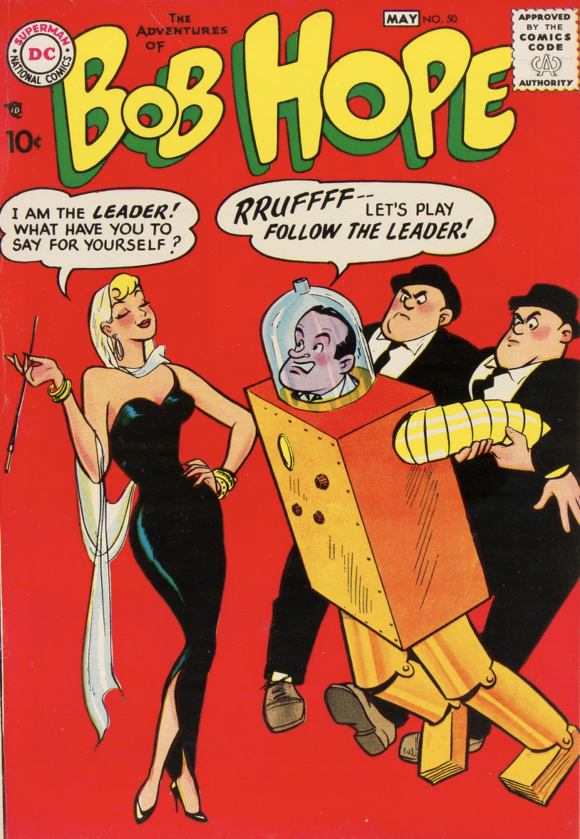 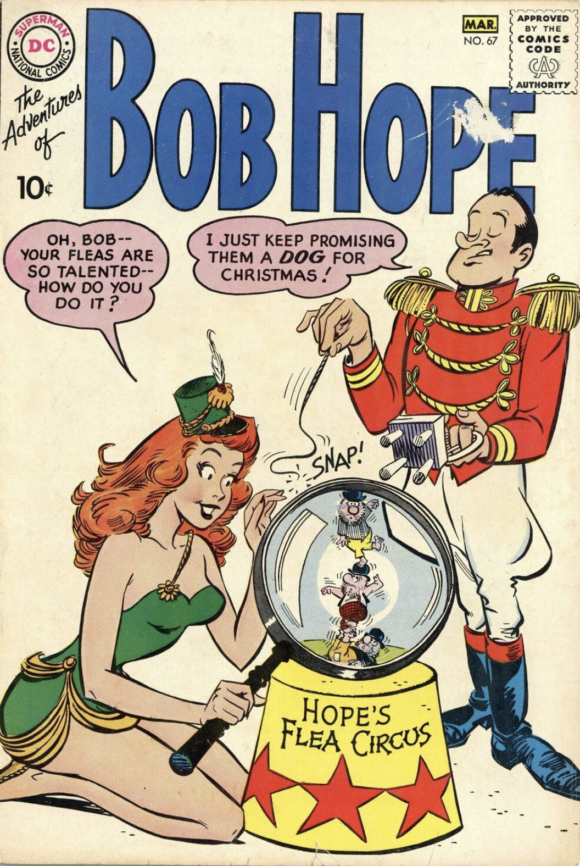 The Adventures of Bob Hope #70 (August/September 1962). Another Drucker, inside and out! 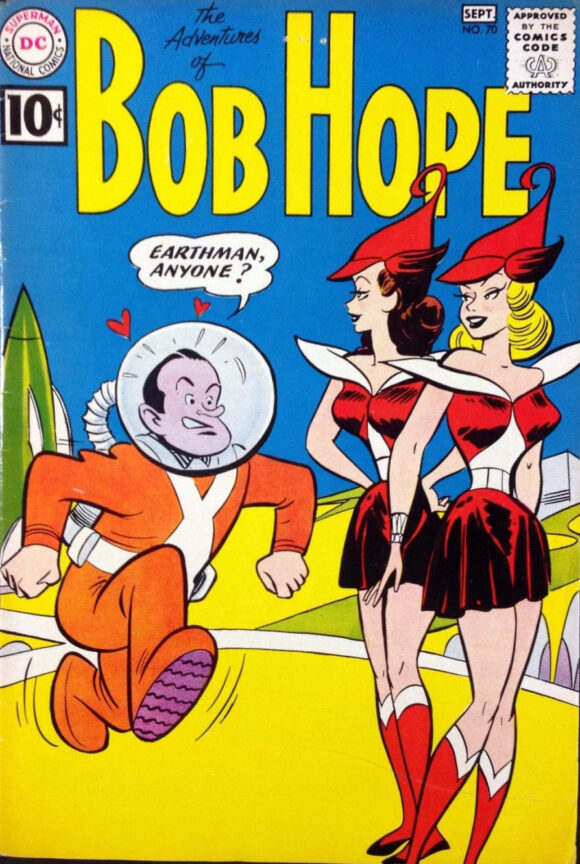 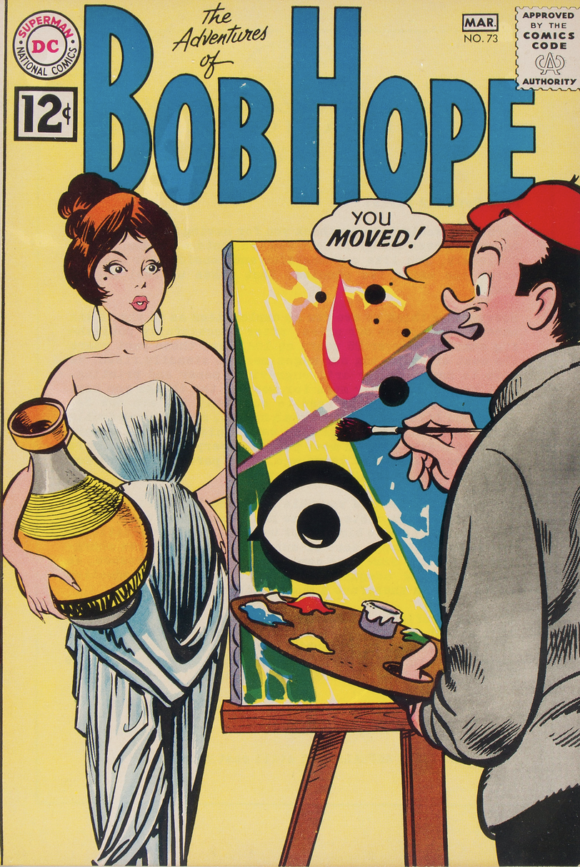 The Adventures of Bob Hope #82 (August/September 1963). The Mona Lisa is, like most of Hope’s jokes… an ancient classic. Mona’s “What? Me worry?” expression courtesy of Drucker. 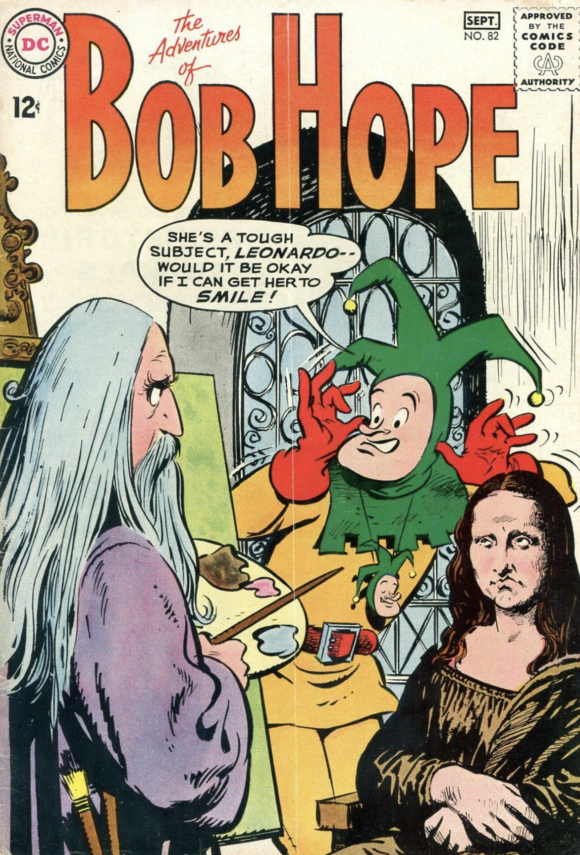 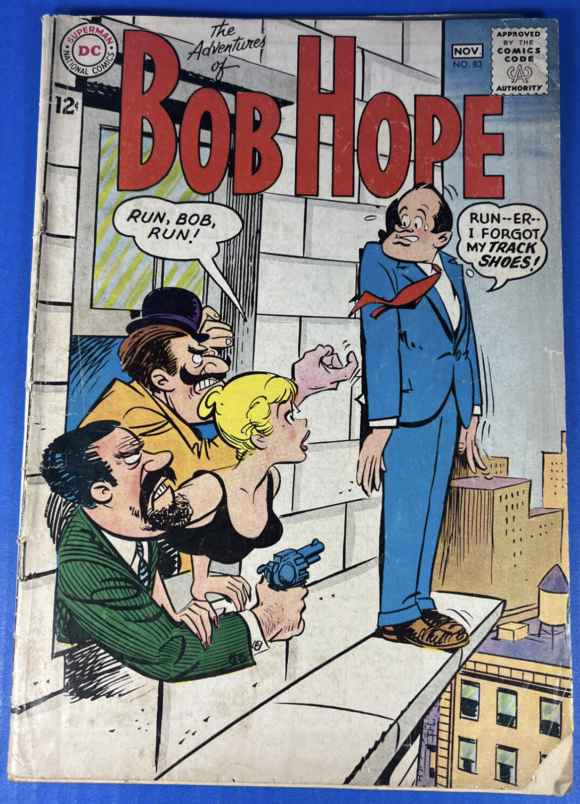 The Adventures of Bob Hope #95 (October/November 1965). I’m trying to imagine the conversation: Editor Murray Boltinoff says to writer Arnold Drake, “Sales are slipping on Bob Hope! The book’s going to be cancelled if we don’t come up with a fresh, hip new direction to turn things around!” Arnold says, “You want hip, let’s give them Super-Hip, the world’s hippest superhero!” “Brilliant,” Murray exclaims. “But you know what would make that even better?! We’ll also introduce 1930s Universal monsters into the book!” “Eureka!” The monsters were there until the end. Art by Bob Oksner. 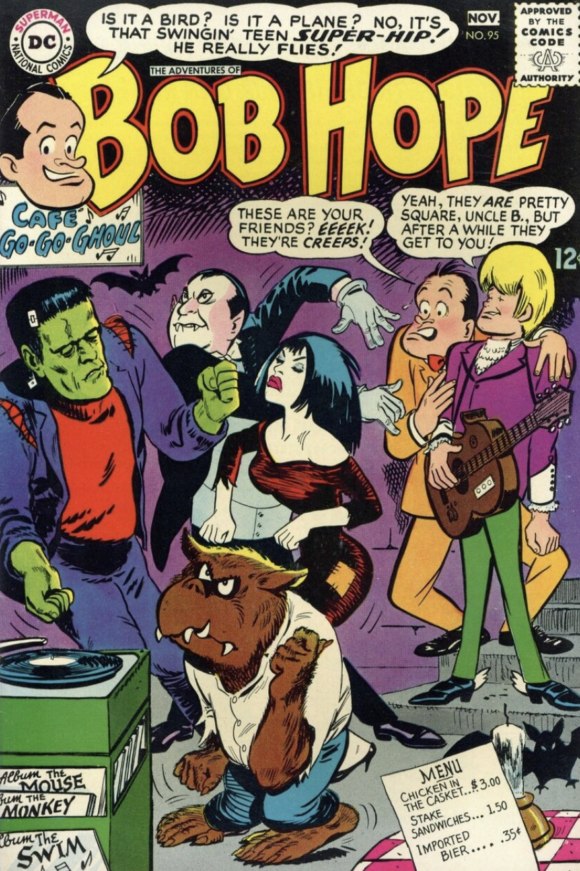 The Adventures of Bob Hope #102 (December 1966/January 1967). A weirdly disjointed but nicely drawn one by Oksner. The Adventures of Bob Hope #106 (August/September 1968). Everybody knows Neal Adams did a bunch of Bob Hope and Jerry Lewis covers and interiors when he was first breaking in at DC, right? The Adventures of Bob Hope #109 (February/March 1968). And, just for good measure and because it was the last issue, another by Adams.