What came out this week and has no capes? A bunch of stuff, including Burning Fields #1, The Wicked + The Divine #7 and Rumble #2. Our G.D. takes a look … 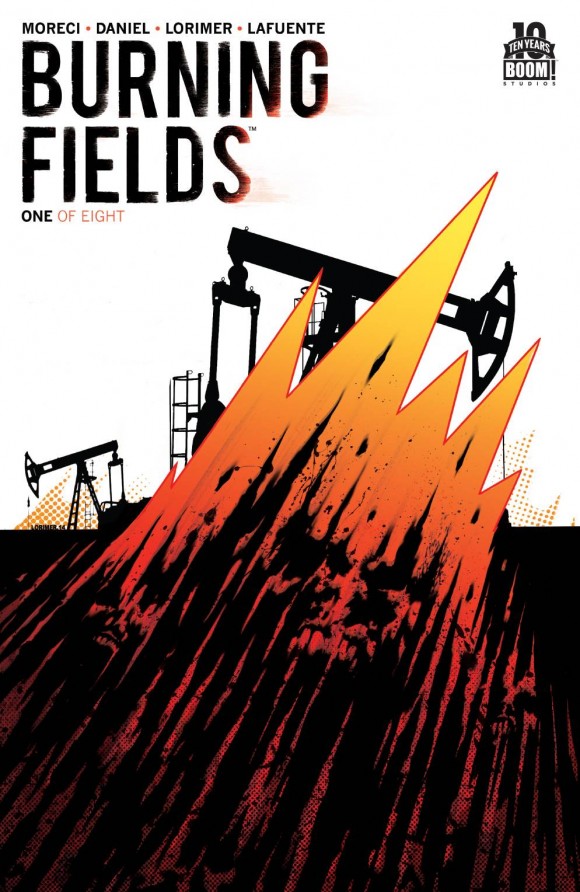 Writing about controversial current political and social events is always a delicate proposition, and the tendency in comics to include otherworldly elements and treat real-world events as the plot devices for superhero adventures only exacerbates this, often leading to a trivialization of these crises. Obviously, few events have been so polarizing  as the most recent Iraq War and, other than Joe Hill’s 2013 series Thumbprint, which addressed the burden on soldiers returning from war, it is hard to think of too many other series which have made extended and direct examinations of this lengthy war.

Burning Fields, the new mini-series written by Michael Moreci and Tim Daniel, attempts to broker a discussion about the Iraq War, and in particular the proxy war fought by the United States through poorly regulated mercenary forces such as Academi, f/k/a Xe Services, f/k/a Blackwater, and the harsh tactics that they have frequently used. The story follows an American brought in to investigate a series of grisly murders that have been linked to a mercenary-controlled oil-field, juxtaposed against the work of an Iraqi detective conducting a parallel investigation until they ultimately come together in their pursuit of justice. And while not readily apparent in the first issue, the book has been billed as having supernatural and mythical elements tied into the murders.

The first issue is creepy and unsettling, and plays nicely on the imbalanced power dynamics in Iraq. There is also a very deliberate thoughtfulness in the writing with a clear effort to avoid easy tropes and, more importantly, to give Iraqi characters a voice and role, rather than playing passing extras to which they are so often relegated in popular media. While certainly the subject matter is heavy, the first issue suggests a series that is conscious of the gravitas of what is at issue, and, with this understanding, is willing to treat its subject matter in a conscientious manner, while also providing for a compelling story that will allow the writers to explore these themes even more deeply. Of course, an essential element of any story is that it must also be engaging, and Moreci and Daniel have managed to present what is, at least at first glance, a gripping read that satisfies as mystery and horror.

If you want to read more about Burning Fields, check out Dan Greenfield‘s Q&A with Moreci and Daniel here. 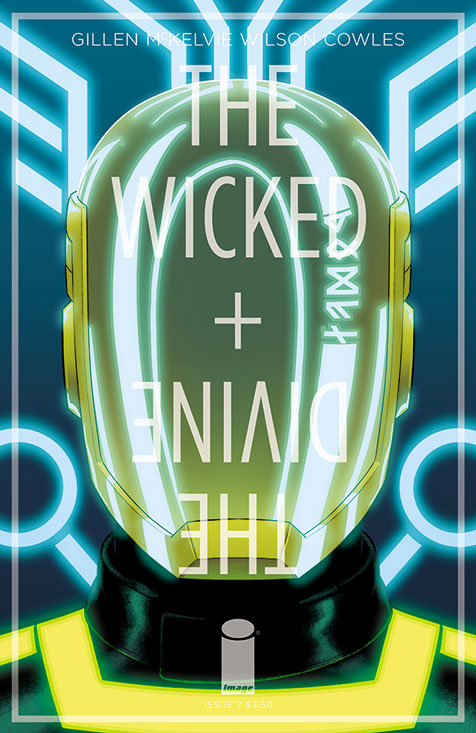 What happens when old gods are reincarnated into the bodies of teenagers roughly once a century, only to burn out and die within a few years, restarting the cycle? If The Wicked + The Divine rings true, the present day incarnations of these deities become music pop stars — the modern day idol — hellbent on using their incredible abilities to enthrall adolescents into cultish devotion with supposedly ascendant music (although this writer suspects that these are more cheap 4/4, three-chord tunes).

The story follows one devotee — a teenage fan-girl — who becomes a sort of uber-groupie, with ultimate backstage access and growing one-on-one relationships with the divinities. But this privilege results in her  becoming both intermeshed into a growing conspiracy arising from the assassination of one of the gods, and the subject of her own stardom, as she becomes a minor celebrity of her own.

The Wicked + The Divine has, on a whole, been a critically well-received series, but while there have been some fun moments — the present issue is set at a fan-festival, and has some cute one-liners and puns worked in — the series seems somewhat flat, a sort of meandering read that is working itself to a punchline ending that writer Kieron Gillen already is aware of, but either hasn’t quite figured out how to get there, or is dragging it out for the sake of prolonging the series. In this way, this series reminds me of Morning Glories, where a mystery underlies the story and the writer has the answer in pocket, but is perpetually dragging out the story to keep reader interest. 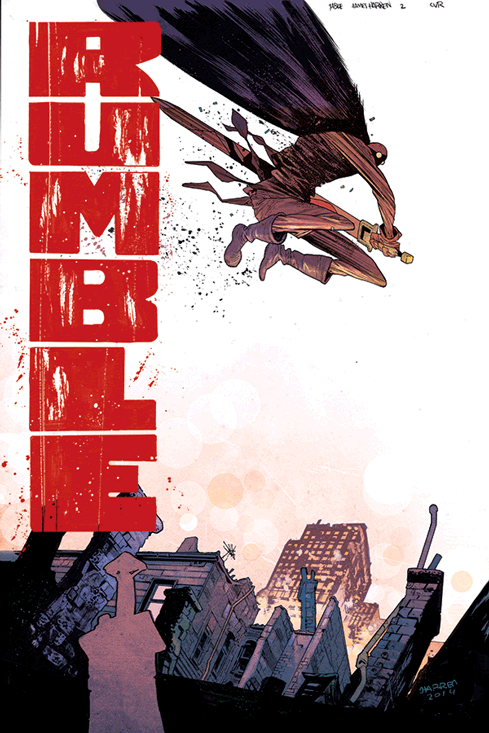 Rumble is a strange book, a story about a warrior scarecrow, Rathraq, with a very large sword who, after an absence, returns to present-day Earth — or some near-identical facsimile thereof — with the exception that unbeknownst to its human inhabitants, monsters and demons are roaming the streets, hiding in plain sight as they manage to pass for homo sapiens.

Rathraq has old debts to settle with certain of these demons, but beyond that his aims are ambiguous; he seems to have righteous goals in his heart but, at the same time, he is vicious and unflinching in his violence. The writing has a nice flow so far, creating more questions about the world than it answers, while mixing in some bits of humor from our human protagonist, who finds himself unwittingly associated with Rathraq.

Maybe my favorite part of the second issue was the novel approach that John Arcudi took to humanizing the demons, portraying them going about in their day-to-day life as largely normal people with real emotional attachments. This also leads to maybe the most difficult part of the second issue, which I won’t spoil here, but it’s worthy of note if just for the fact that James Harren’s excellent art makes this a tangibly upsetting few panels. After two issues, where exactly this series is going is unclear, but the ride to wherever that is looks to be a fun one.