Moreci, Daniel and fellow creepmasters Colin Lorimer (artist and cover) and Riley Rossmo (variant cover) are back after the well-received Curse. This time it’s not werewolves — it’s a Middle East monster story.

As if that part of the world weren’t already terrifying. 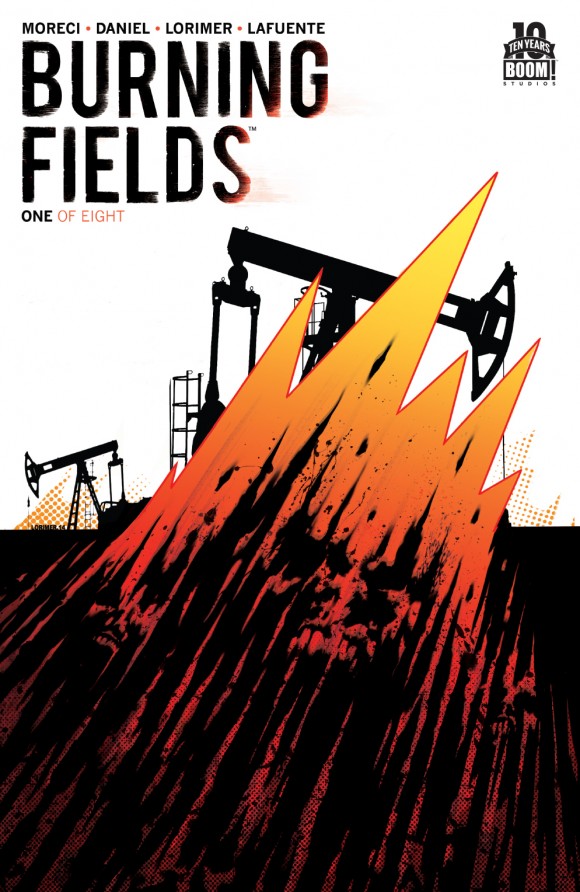 Main cover by Lorimer. This is great.

“A geopolitical drama with monster mythos, Burning Fields is a story for both fans of Zero Dark Thirty and The Thing, as the writers of Roche Limit and Enormous explore the evil that lurks when greed drives one to drill too deep into the unknown.

“Dana Atkinson, a dishonorably discharged army investigator, is pulled back to the Middle East when a group of American oil technicians disappear under bizarre circumstances. With the help of an Iraqi investigator, what Dana discovers is unimaginable: a series of unusual incidents at the drill site lead her and her unlikely ally to discover a mythic evil that has been released, one that threatens both the lives of the entire region and the fragile peace that exists.”

Dan Greenfield: What’s the genesis of the project?

Tim Daniel: Mike started it all off with a brief synopsis shared via email back when we were still working on Curse. We met with the Boom! editorial team in Seattle at Emerald City Comicon ’14 to discuss the story and proposed length. Once we returned home from the con, Mike and I both started gathering reference materials and doing research.

Michael Moreci: My mindset began with having a bone to pick with the culture of private militaries and what they represent for our culture of endless war. From there, it was a matter of translating my need to tell this story into a plot, create compelling characters, conflict, and so on. 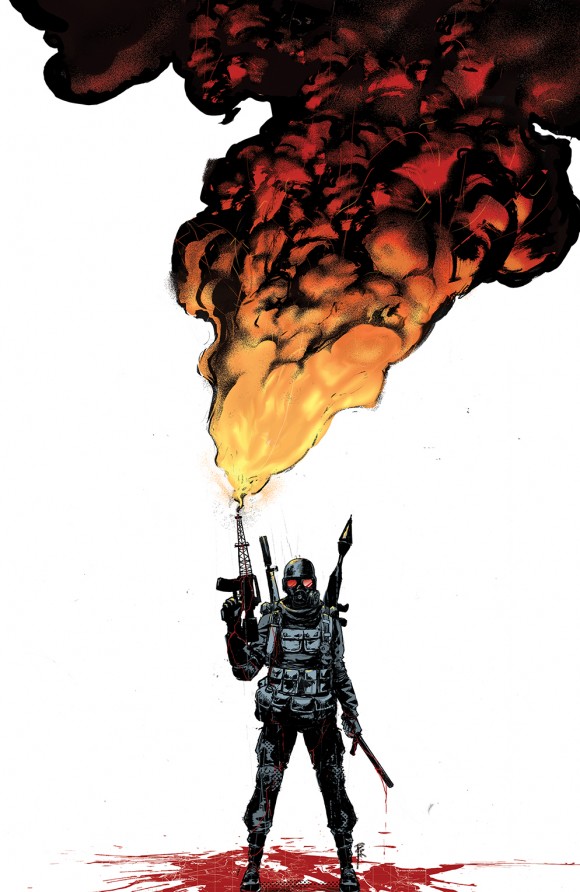 This is a story that plays off the current geopolitical landscape. What kind of research did you do on those aspects of the story?

Daniel: I focused mainly on the ancient myths of the region. Mesopotamian mythology is loaded with monstrous beings and conquering heroes and is easily as compelling as any other mythology I was more familiar with. We selected two figures from one tale in particular and saw how certain aspects of it applied to Burning Fields. We then set about creating an iconography based on the myth and its central figures that we could use as a visual motif throughout our series.

Moreci: My focus was on, first and foremost, private militaries, learning them inside and out. I wanted to understand how they operate, how they’re funded, what keeps them an active player in the global security scene (none of the answers to these investigations are good, by the way). From there, I spent a lot of time really digging into the culture of Kirkuk, learning its history, politics, and people. It’s incumbent upon us to be as respectful of this region as possible and get the details right; Tim and I both take that very seriously, therefore it was necessary to learn what we could through the Internet and friends who have been to Iraq and/or know more than we do. 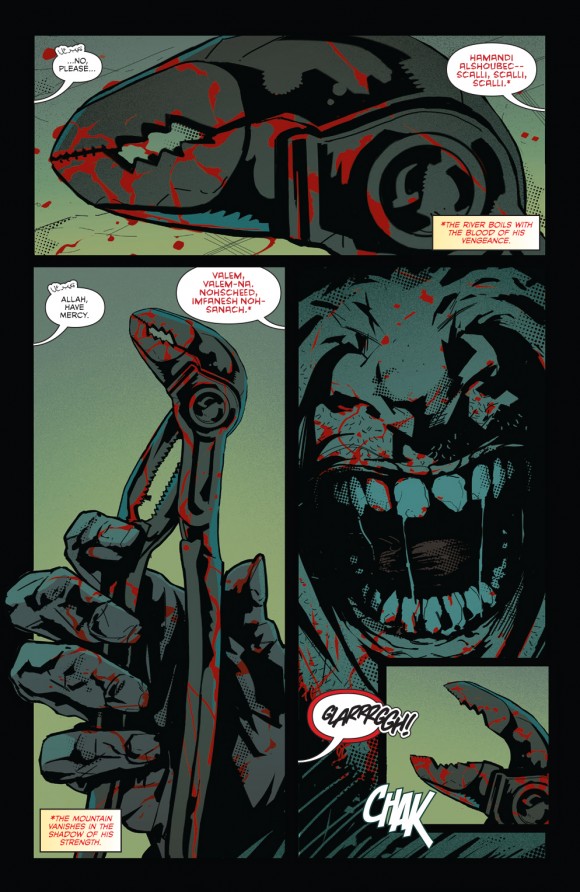 Things are scary enough in the world right now. How do you balance adding a supernatural element to a story like this without coming off as glib?

Moreci: That’s a fair question. It’s all about how the supernatural is handled. The original Godzilla was a powerful, haunting metaphor for the aftermath of the nuclear bomb. I think we have the same approach—it’s not about the monster, but what it represents. In the case of Burning Fields, not to give too much away, you’ll see that the way the supernatural is dealt with is not a cause of horror, but an effect.

The scariest monsters are always the ones we create. What’s really terrifying is how this supernatural element came to be, how it exists in the world of Burning Fields — that’s what Tim and I focus on.

Daniel: The intent to tell the story as truthfully as possible was the only goal. By truthful I mean honestly, and not from a basis of strict fact or reality, but with the same approach we took in creating Curse. In that story we have a child dying of leukemia and a father willing to do anything to save his son, even hunt down a werewolf. The presence of the fantastic does not diminish Laney’s anguish, it only serves to underscore his desire to stop what appears to be inevitable. What parent would do any differently for their child?

Same goes in Burning Fields, wherein we have a pair of detectives that have been constantly stymied in their efforts to pursue justice. The supernatural element of Burning Fields underscores just how powerfully and thoroughly truth can be corrupted. 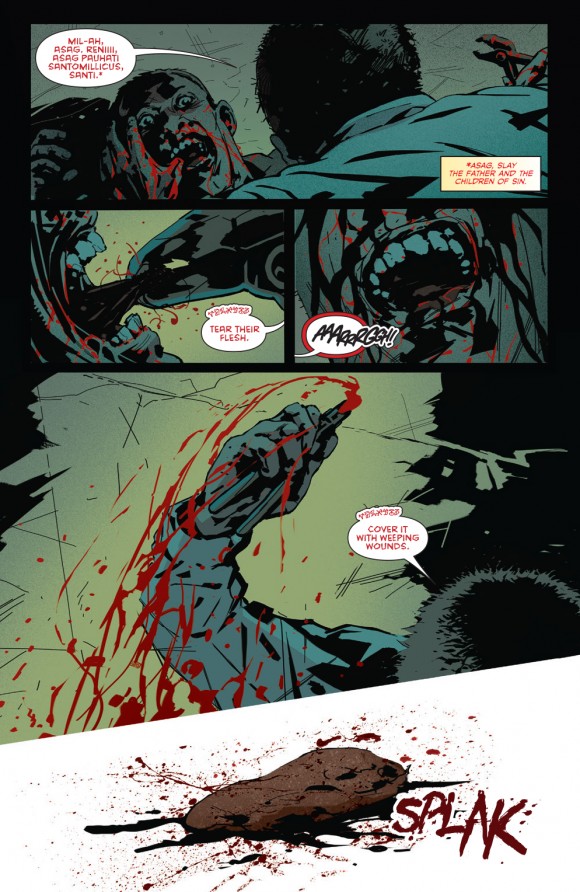 How do the two of your collaborate as writers on a project? Is one of you more plot driven, while the other is more dialogue driven, for example? Tell us how it all works.

Daniel: Though our process and sensibilities tend to differ, we complement one another well. I tend to think visually first, in broad strokes, and then slowly get lost in story minutiae and subtext. We fist-fight verbally on the phone, since I live in Montana and Mike in Chicago, and afterwards, we have make-up sex and talk sports.

– Break the series outline into issues.

-Divide the issue outline into scenes assigned to each of us, then write our respective portions.

– Combine our scripts into one.

– Take a read while marking with revisions noted for the other to review.

– Take another pass(es) until we lock each portion of the script.

At this point, Boom! editorial (Eric Harburn and Chris Rosa) reviews the script and offers notes. But that seldom happens because we write perfect stories, leaving our editors nothing to do but eat burritos and buy us drinks instead (not true). Once notes are reviewed, we make the necessary, mutually-agreed-upon revisions and iterate the script as many times as necessary until all parties are in agreement that we have a final lock. 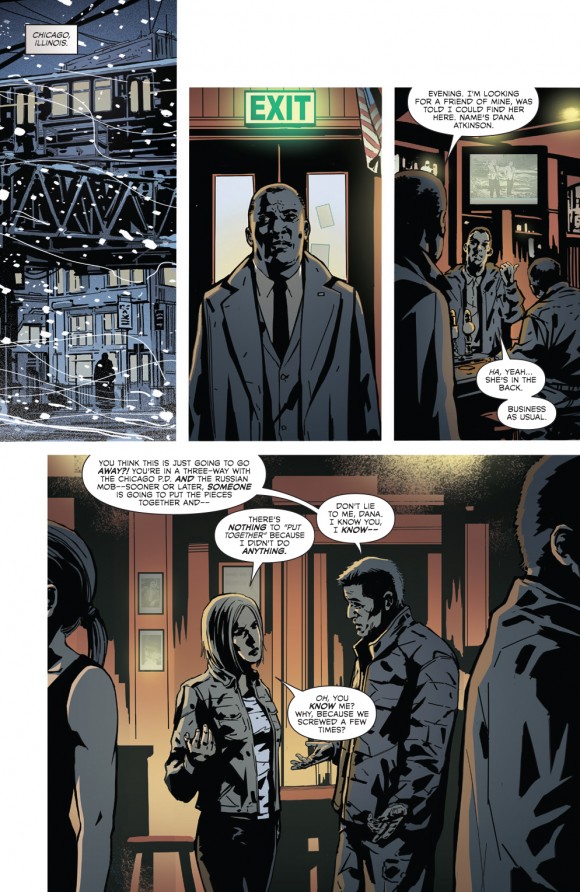 What other work, fiction or non-fiction, inspired some of this?

Moreci: The same, though I’d mix in the Qur’an and Jeremy Scahill‘s book on Blackwater, as well as the website wagingnonviolence.org. 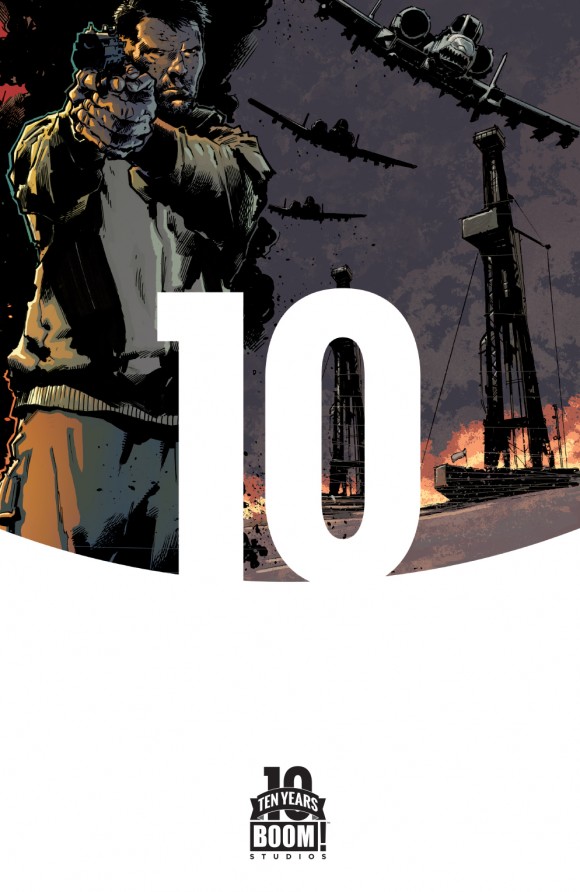