Since the merchandising deal a couple of years ago, dozens of creators have had a hand working on Batman ’66, whether in words, illustration or sculpture.

And for decades, fans have kept the flame alive through cosplay, books, websites, podcasts — you name it

Many of those people were kind enough to share their thoughts on Yvonne Craig today. (If I get more, I’ll add to what’s published below.)

And for good measure, I’ve included interpretations of Craig’s Batgirl from various artists.

— For our 2015 birthday salute to Yvonne Craig: Click here. 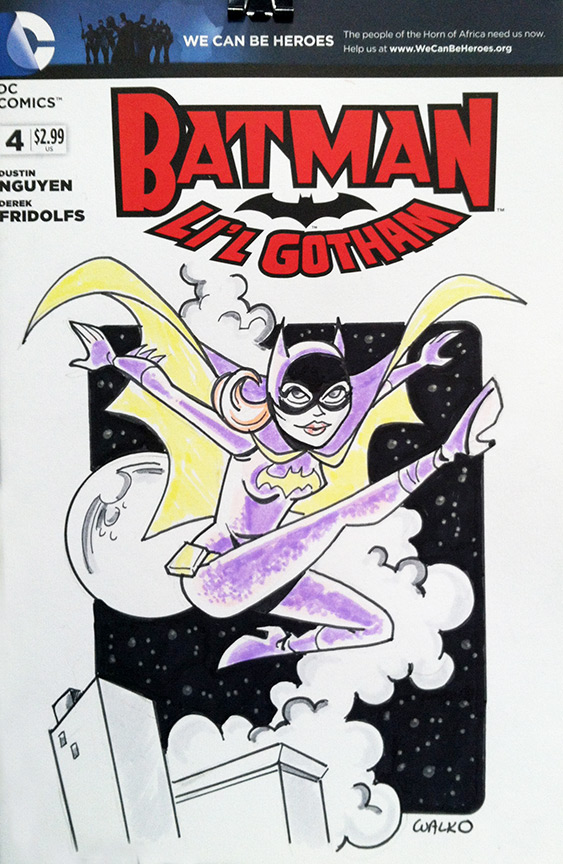 Yvonne Craig gave memorable turns on shows like Star Trek and The Man From U.N.C.L.E., but you can’t stress her importance as Batgirl in the ’60s enough. I meet fans of the show all the time and regularly hear from women who watched the show as children, pulled in by Craig. She played not only a role they could imagine themselves in, but did it with so much presence.

It would have been easy and typical of the time for Batgirl to be only a beautiful draw for male viewers but that’s not the way they played her. She’s extremely proactive with a fun spirit — Craig essentially channeled Errol Flynn in her performance, arriving smiling with fists on hips up above the villains like she already won just by showing up. And then using her dancer background she would spin and kick with huge moves that amped her presence up even more. She was a huge shot in the arm to the show and by all accounts a pleasure to talk with at appearances. Any fans of the show and really, the Batman comics, are indebted to her. 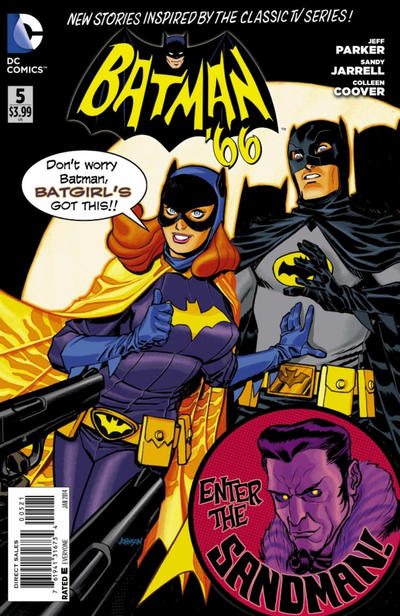 Yvonne Craig was a pioneer in female television characters that were independent, powerful and fully capable of taking care of themselves and others. Her Batgirl was one of the great, memorable characters in television history. She clearly loved the role and was very comfortable in it as a self-confident, self-assured woman and as an athlete. Her vivacious personality, sense of humor and kind graciousness to fans will be missed. I’m happy to have gotten a chance to sculpt her. 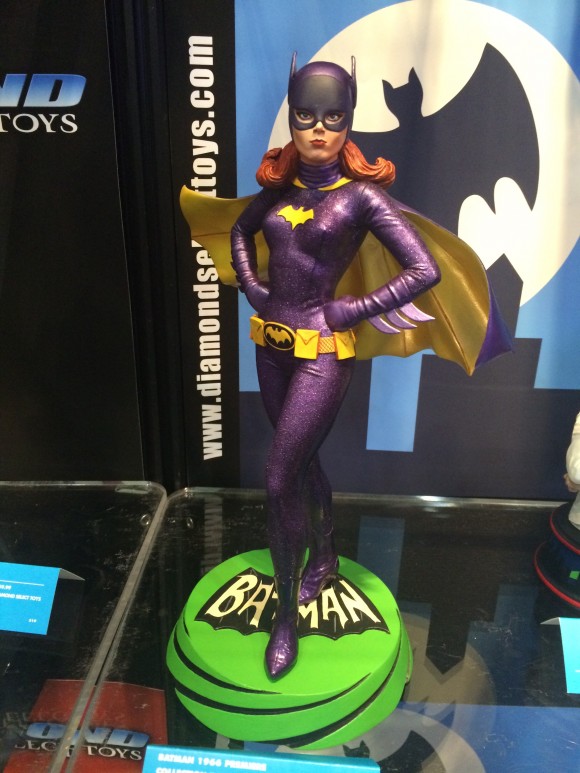 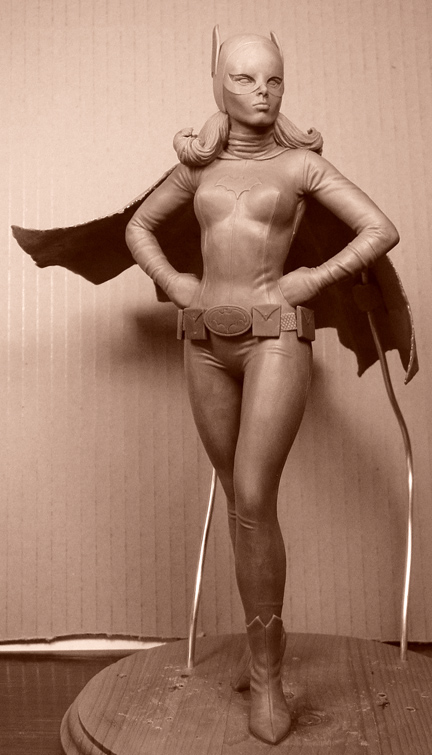 Even as a kid I felt very keenly how Batgirl represented independence, and that was communicated so clearly by Craig‘s performance and dedication to the role. Combined with one of the best ever live-action costume designs, Craig made an indelible mark on me.

The best part of any Batman episode was seeing Barbara Gordon cross her bedroom floor to activate the revolving wall that hid her Batgirl costume — secret agent cool! So sad. I’m just numb. When are we gonna beat cancer once and for all?

Loved her so much. One of my earliest childhood crushes. Classy lady, too. Rare case where SHE inspired the comics instead of the other way around.

Her apartment had one of the best secret hiding places in all of fiction. The alley exit for her Batcycle always stuck with me. So cool. 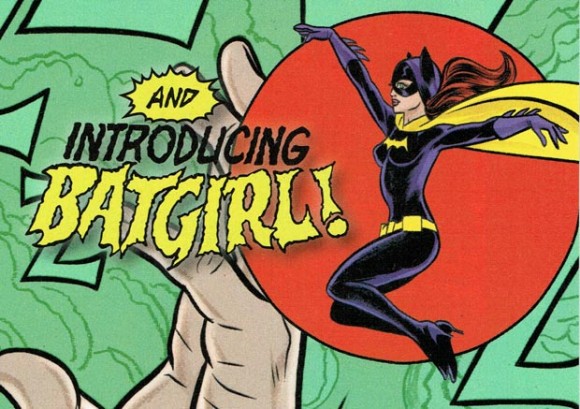 Anytime she was on screen was a favorite Batgirl moment. But I think the scene that makes me smile the most was when she was interacting with Vincent Price (Egghead) as she drove him around on her Batgirl cycle. I think I like that in particular because she said that she had so much fun doing that and adored Vincent, even though she managed to run over his foot with the cycle during one of the takes. 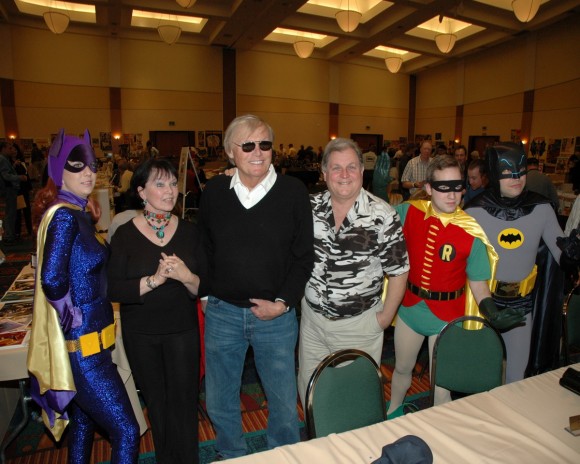 That’s Scott on the right 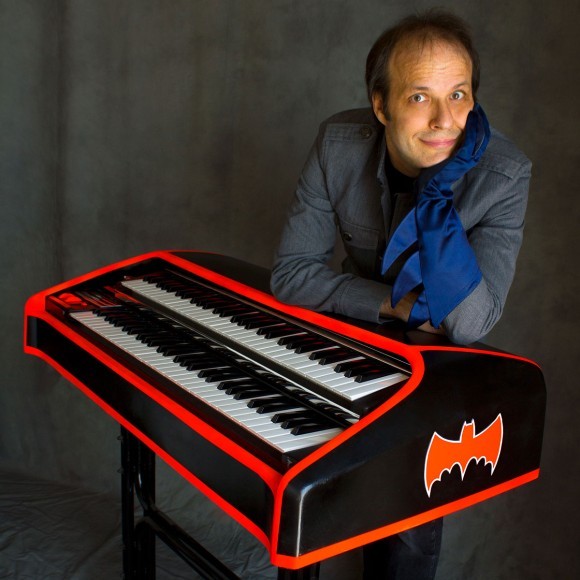 Yvonne brought a unique combination of things to the role that no other person could have, seeing as how they weren’t Yvonne. She brought joy, first and foremost. Her Barbara and her Batgirl were glad to be alive, not only helping people, but clearly having a good time doing it. Also, she brought class and poise to the part, a butt-kicker, yes, but always a lady despite the dirty criminals she cleaned up off Gotham‘s streets.

Yvonne also endowed her Batgirl with a singular brand of athleticism that was wholly her own, due to her fine grasp of dancing and surety of movement. That can’t be underscored enough; Yvonne Craig’s Batgirl was comfortable in her skin and her clothing, and her every movement telegraphed this to the audience. Many fans of the show not only wanted to be Batgirl because of Yvonne, but they also wanted to be able to MOVE through life and adventure like her. That’s her legacy, the will and the intelligence to put forth the physicality of Batgirl, not just the mental drive. 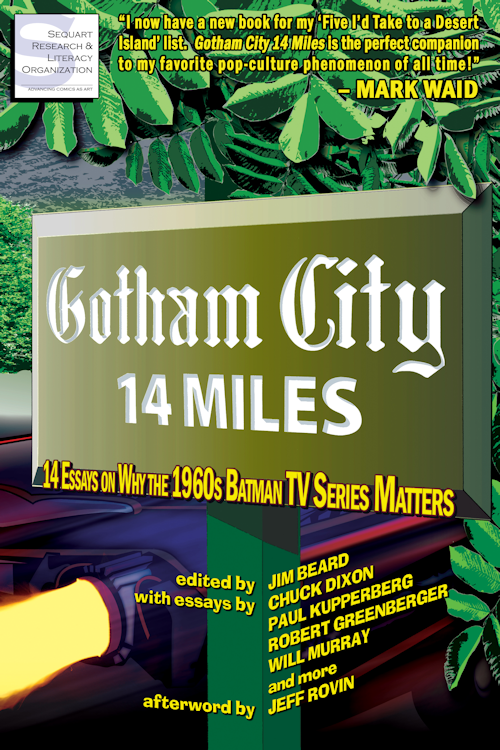 My favorite Batgirl moments have always been the change from Barbara to the Dominoed Daredoll, not only because of my fascination with secret rooms, but because of Yvonne‘s quick, sure movements and purposeful stride to complete the transformation (as William Dozier described it). I also love all the scenes with our heroine on the Batgirl Cycle, because that’s really Yvonne we see.

And, I’ll say it: I love the Batgirl theme. It will take on even greater meaning for me now.

When watching the opening credits, and Robin‘s roundhouse punch was followed by Batgirl‘s trademark ballet kick… you knew you were in for a treat. Batgirl was by far the coolest member of the Terrific Trio, and that was largely due to Yvonne Craig‘s charming portrayal of the motorcycle-riding heroine. I can’t imagine anyone else filling out that sequined purple bat suit so sublimely.

My favorite Batgirl moment had to be Barbara Gordon‘s first transformation scene, accompanied by her very own theme song. Everything about Babs was cooler than the Dynamic Duo, from her trendy apartment (with secret lair) to her mode of transportation (that jazzy purple motorcycle). What an introduction! 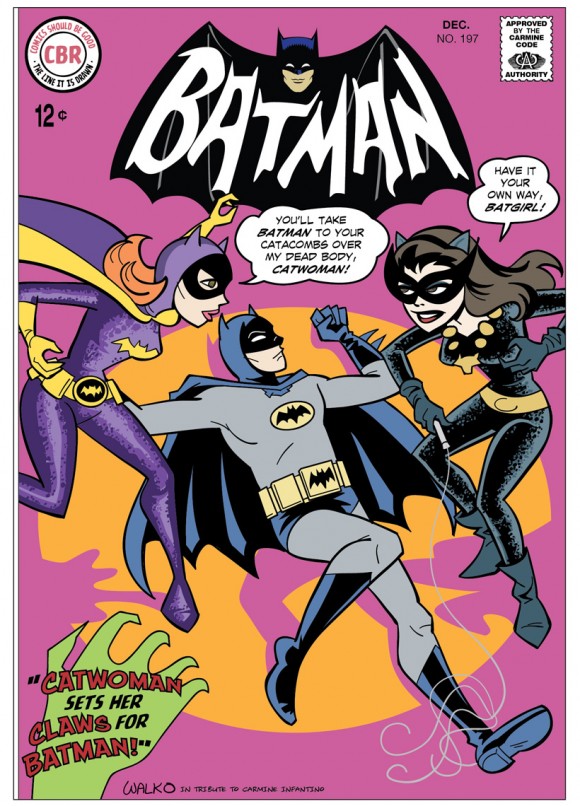 I met Yvonne Craig once, back around 1998 at the Motor City Comic Con. I’d wandered into the green room on a Sunday afternoon, and there she was holding court with a few fans. As I sat down at her table, she began to tell a story about how in November of 1963, her brother had finally convinced their mother to allow him to borrow her car for the day. Yvonne‘s mother insisted he go directly to school and come straight home afterward. Instead, Yvonne’s teenage brother drove to a parking lot in Dallas, with the hopes of seeing President Kennedy.

The rest, of course is history. Kennedy was assassinated and when Yvonne’s brother returned home, everyone was mourning the death of the young president. At some point their mother realized he had not returned in the car. Eventually, he admitted he’d not gone to school, but instead to see the president. And the car? It was part of the greatest crime scene in American history. He had parked the car in the lot of the book depository — and couldn’t get to it.

A beautiful actress, a role model, an icon. Just like most of us Batfans, I first knew Yvonne as Batgirl when watching the Batman reruns. From there, I became a fan. She’s a great inspiration to many, such as those in the cosplay community donning their Batgirl costumes. For me, she inspired me to start the Facebook fanpage, Batgirl Access Channel, where I share some of her filmography with fellow fans.

I’ve never had the chance to meet Yvonne, only exchanging of e-mails. Some of the best memories (even though it’s only via emails) are the times when I showed her some of the tributes that I’ve made and she actually liked them. Thank you, Yvonne.

Eugene Nock, pilot and owner of the original Batcopter N3079G

I am very sorry to hear of my friend Yvonne Craig‘s passing. Her contribution to the film arts is legendary. She worked with many of the greats, including Elvis Presley. I of course most loved her for the Batman TV series and her Batgirl!

Batgirl was the first cool female superhero on TV and she empowered all women that they too could be equal and cool. I cherish and thank Yvonne Craig for autographing the Batcopter N3079G. God bless you! 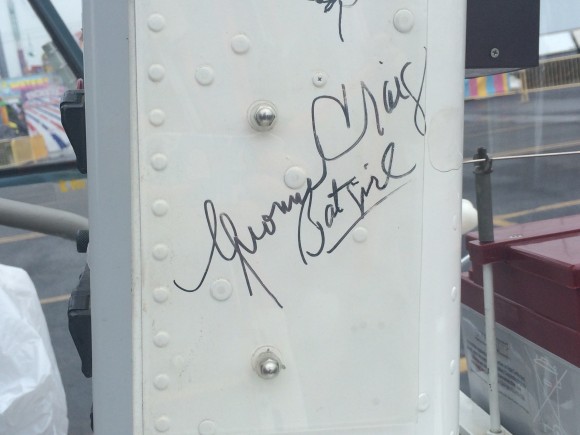 When we were getting ready for the Lord Death Man story, Jeff Parker asked what I’d like to draw. I listed some half-assed ideas relating to LDM (none used, thankfully!), and then said, “and if Batgirl‘s available, I’d love to draw her.” That bit stuck! Robin got acute vertigo and we took Batgirl to Japan for the funnest comic I’ve ever drawn. 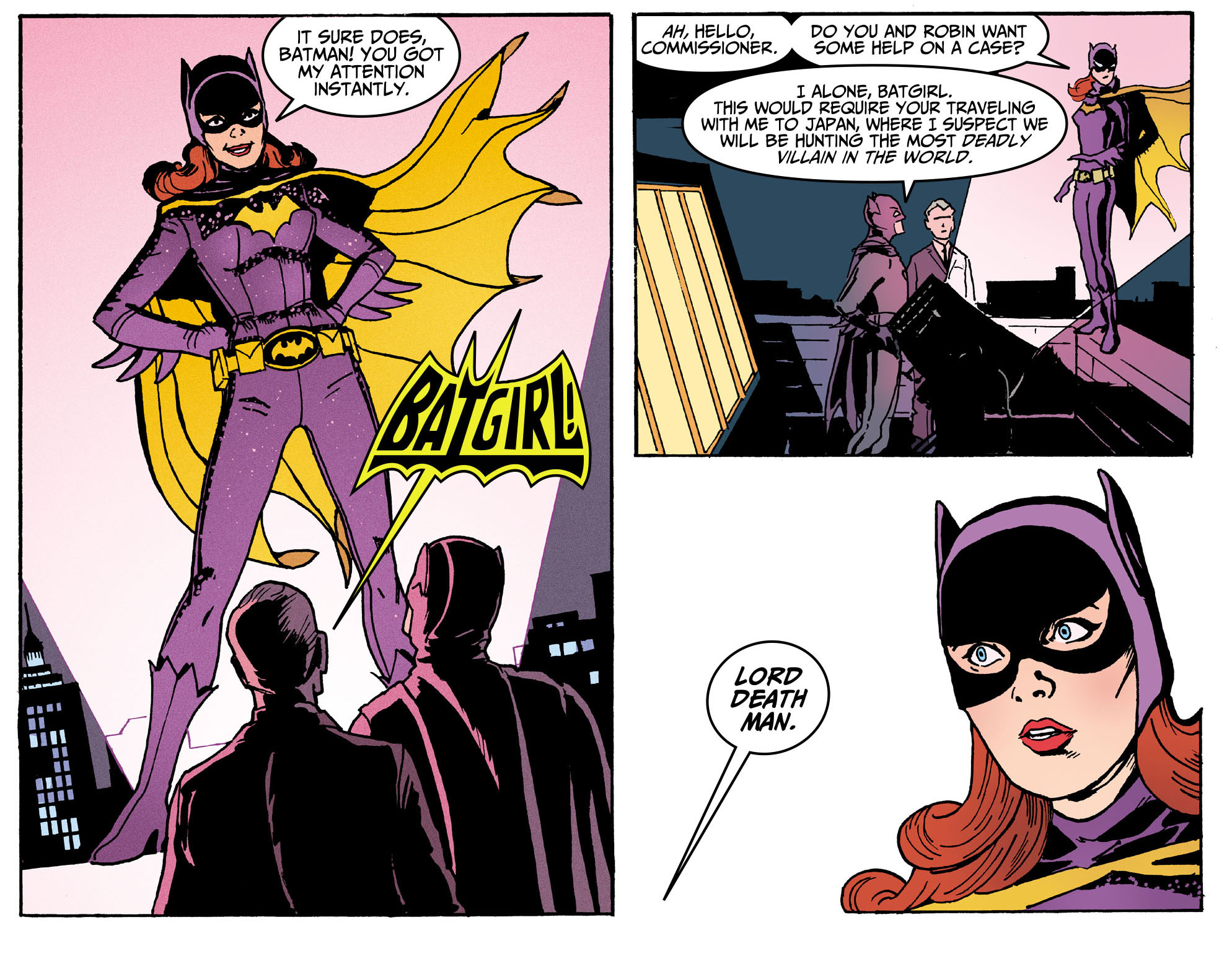 Yvonne was a magnificent Batgirl. She gave her character an impish charm that served her co-stars well. And she was as charming and gracious off-screen as she was on; the one time I met her and shared a panel with her, she was absolutely delightful. ‘Tis a sad day in Gotham.

My favorite Batgirl episode may well be The Ogg and I, because she carries it —Batman and Robin don’t even show up until the 20-minute mark, giving Batgirl ample time to do her thing!

I can’t begin to explain what a revelation this show was to me. I remember staring, wide-eyed, as this gorgeous woman, this absolute vision, danced across her fight scenes with the grace of a Russian ballerina and the impact of Bruce Lee. She held her own with Batman… hell, there was a sense that she didn’t even really need Batman.

And it got better. As Barbara Gordon, she was also a librarian. She loved books. She was smart, smarter than Robin, maybe smarter than anyone on the show. She had the confidence and poise that every girl longs to have, and best of all (for me) she had red hair, like mine. In terms of her time and legacy on Batman, I think the main reason the third season gets any respect at all is because of Yvonne. She was genuine and enthusiastic in the role and the only one still letting herself be part of the joke rather laughing along with it as the others did by this point. I feel she never got enough credit for her role, then or now.

Favorite Batgirl episode would actually be the Siren episode. I liked that she and Robin teamed up to save Bruce Wayne. Considering how the budget was slashed so much and story time was cut that the stories had to revolve entirely around the core cast, this was one of the better ways of doing it and I wish they had done it more often as Yvonne worked well with Burt Ward.

Anthony Porter, singer for Clashing Plaid and songwriter for “Be My Batgirl”:

Yvonne brought such fun class and beauty to the role of Batgirl. That’s why she is loved for so many generations.

Yvonne Craig, like Lynda Carter, was that rare combination of sex symbol and role model who left an indelible mark on what has become Geek Culture. In fact, you have to wonder if Batgirl‘s enduring popularity is not due in large part to Craig‘s portrayal of her character in the 1960s Batman TV show. It should also be pointed out that Craig, like so many women, died as a result of complications stemming from breast cancer so I hope even in her passing that she inspires young girls to get exams and help fight that disease.

Yvonne Craig’s time as Batgirl was a delight. It would be depressing to contemplate the third series of Batman without her. In a season that was otherwise cheap and perfunctory, Ms. Craig was often the sole, desperately needed spark of life. I love her scenes with the hilarious Neil Hamilton. I especially love the child-like fun Batgirl had during fights. 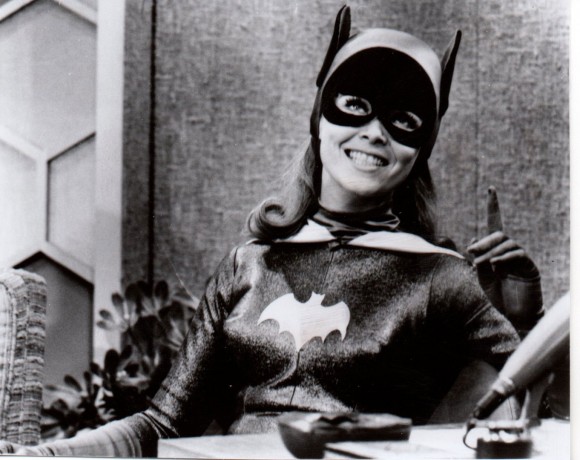