But when it comes to the aforementioned wall-crawler, I’m an even bigger fan of John Romita Sr.

So, it’s pretty dang dandy that Romita and Stan Lee’s classic two-issue 1968 magazine series The Spectacular Spider-Man is getting a new trade paperback collection later this year, according to a listing on Amazon. 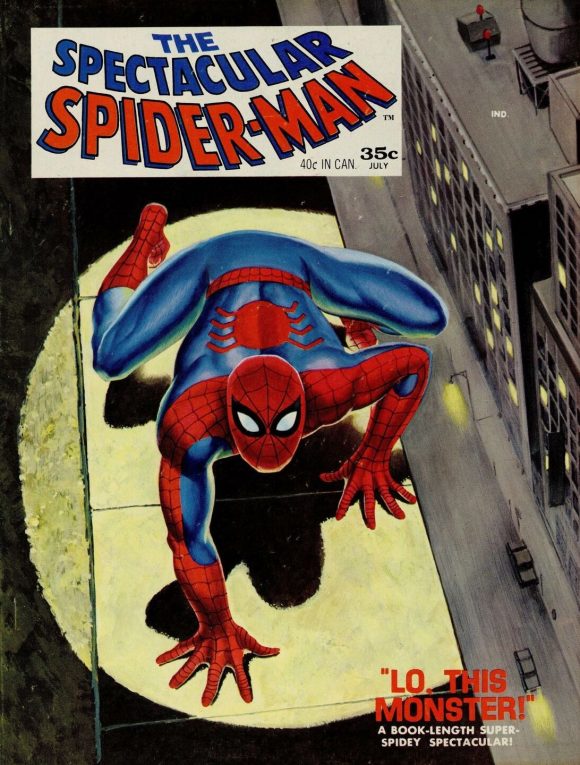 Original Issue #1 cover, painted by Harry Rosenbaum from a Romita layout. The cover is being used as a placeholder on Amazon.

In 1968, Spider-Man swung into a brand-new magazine-sized format – and the results were spectacular! With John Romita Sr. channeling film noir in his visuals and Stan Lee offering longer stories for a more mature readership, these were Spidey tales like nothing that had come before! In the first issue, told in glorious halftone black-and-white, things get political as Richard Raleigh bids to be the next mayor of New York — but will his campaign be derailed by a monster running amok in the Big Apple? Then, Lee and Romita go fittingly full-color for the high-flying return of the Green Goblin — and deliver a feature-length showdown between Spidey and his archnemesis! Plus, revisit the origin of Spider-Man – as retold by Stan and his brother, Larry Lieber!

The paperback lists for $19.99 and is expected in December.

That said, it must be noted that Marvel has not formally solicited the book yet. That happens though: Titles sometimes pop up on Amazon or other retail sites first. Point is, anything can change.

Nevertheless, keep your eyes out — and start filling out that holiday shopping list early.