Scott and Dan — with special guest Ryan Dunlavey — hit up the comics racks from 37 years ago! This week for RETRO HOT PICKS, Scott Tipton and I are joined by artist Ryan Dunlavey, co-creator of The Comic Book History of Animation miniseries with Fred Van Lente that debuts Dec. 9 from IDW. We’ll be selecting comics that came out the week of Dec. 2, 1983. Last time for RETRO HOT PICKS, it was the week of Nov. 25, 1985. Click here to check it out. (Keep in mind that comics came out on multiple days back then — as has become the case now. So these are technically the comics that went on sale between Nov. 29 and Dec. 5.) So let’s set the scene: Ronald Reagan was in the middle of his first term as president. Terms of Endearment, which would go on to win five Oscars — Best Picture, Best Director (James L. Brooks), Best Actress (Shirley MacLaine), Best Adapted Screenplay and Best Supporting Actor (Jack Nicholson) — topped the box office while in limited release. It would go wide later in the month. But you know what was also in theaters? The gently brilliant A Christmas Story, which would not become a smash until it received a second life on home video and, later, marathon showings on cable. In the Nielsens, the second part of the TV movie Kenny Rogers as The Gambler: The Adventure Continues was the top show of the week. All Night Long (All Night) by hit machine Lionel Richie led the Billboard 100, while Richie’s Can’t Slow Down was the best-selling album. Nottafinga! — Ryan Dunlavey, artist, The Comic Book History of Animation and The Comic Book History of Comics The Amazing Spider-Man #250, Marvel. All of the comics on this list came out TWO MONTHS before I became a comics fan and regular reader — I turned 12 in 1983 and I’d read comics before but this was the first year of my regular monthly reading habit. At first, I read a lot of Marvel titles, a handful of DC and absolutely nothing else because there were no comic stores where I lived, so I didn’t even know other comics existed (and I’ve never been an Archie fan). Luckily for me the newsstand where I bought comics held onto...

A paperback tribute to one of comics’ most respected illustrators is due in 2021… Golden Age great Reed Crandall was one of those illustrators who’s often called an “artist’s artist” and for good reason. In his heyday, Crandall brought a finer approach to comics than was seen among many of his contemporaries. Small wonder, then, that TwoMorrows’ 2017 illustrated biography — Reed Crandall: Illustrator of the Comics, by Roger Hill — sold out in a mere six months. Now, the boutique publisher is making the volume available again in February 2021 as a $39.99, 256-page, full-color softcover. Dig the official description: NOW IN SOFTCOVER! From the 1940s to the ’70s, Reed Crandall brought a unique and masterful style to American comic art. Using an illustrator’s approach on everything he touched, Crandall gained a reputation as the “artist’s artist” through his skillful interpretations of Golden Age super-heroes Doll Man, The Ray, and Blackhawk (his signature character); horror and sci-fi for the legendary EC Comics line; Warren Publishing’s Creepy, Eerie, and Blazing Combat; the THUNDER Agents and Edgar Rice Burroughs characters; and even Flash Gordon for King Features. Comic art historian Roger Hill has compiled a complete and extensive history of Crandall’s life and career, from his early years and major successes, through his tragic decline and passing in 1982. This new full-color trade paperback edition includes never-before-seen photos, a wealth of rare and unpublished artwork, and over eighty thousand words of insight into one of the true illustrators of the comics. — The book will be available at comics shops and through booksellers but you can pre-order it now directly from TwoMorrows. Click here. And to give you a bit more background, check out Hill’s foreword: — MORE — TwoMorrows’ MARVEL COMICS IN THE 1970s Going Back to Print. Click here. — INSIDE LOOK: REED CRANDALL’S EC STORIES Artist’s Edition. Click... 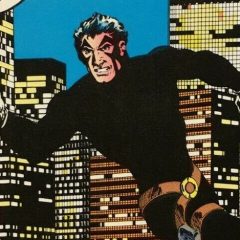 EXCLUSIVE: The landmark title will get a treatment similar to Absolute Editions – including NEW art… 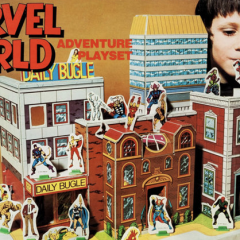 TOYHEM! Artist Ryan Dunlavey’s entrance to the House of Ideas… 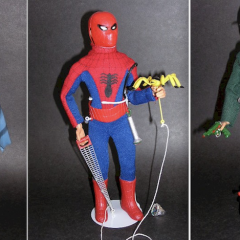 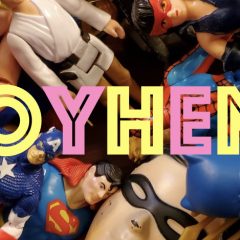 Our annual holiday season celebration of the toys of yore returns… 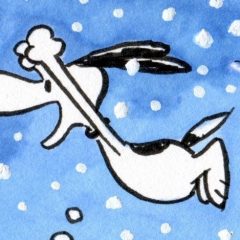 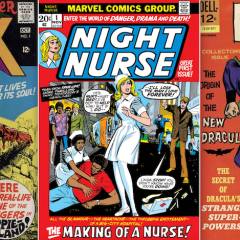 (Plus some ’70s too.) Because this week is Thanksgiving, get it?