BRONZE AGE BONANZA enters its fourth year! — Welcome to BRONZE AGE BONANZA — our monthly series that looks at the greatest covers of the Bronze Age — exactly 50 years later. For more info on this feature, click here. — Hey, it’s January and we get to start covering a whole new year. It’s an eclectic slate this month and we’ll get right into it. Dig the TOP 13 COVERS OF JANUARY 1973 — RANKED: — 13. Casper Space Ship #5, Harvey. I just like it, OK? It gives me the warm and fuzzies. — 12. Thor #210, Marvel. I’m pretty much a sucker for a good close-quarters battle cover a la Kirby, Buscema or, in this case Gil Kane (inked by Joe Sinnott). — 11. Daredevil #98, Marvel. Nicely framed urban catastrophe with a kinda cool-looking villain and a fab Black Widow. This kind of explosive tableau can be hackneyed or effective. This one’s effective. — 10. Strange Adventures #241, DC. A nice, clean Nick Cardy cover. The menacing angle of the giant, misty hands is what makes it — it’s as if the cover were pulling you toward it on the spinner rack. Groovy. — 9. Astonishing Tales #17, Marvel. I never think of Ka-Zar fighting guys who look like this but maybe I haven’t read enough Ka-Zar. Either way, it’s that contrast between sleek Gemini and loin-clothed Ka-Zar that sells this one, beyond the dramatic action. — 8. Korak #51, DC. You could argue that this one’s a bit too dark but the bold red behind Korak and the uplighting effect bring this one to the fore. Joe Kubert was another master at intense, close combat. — 7. Star Spangled War #168, DC. The reaction-shot cover is a hoary chestnut but Kubert always made the concept work, especially when he was tapping into his antiwar leanings. To hell with you, Captain Gloryhound! — 6. Iron Man #57, Marvel. Dig that looming, ethereal visage of the Mandarin — it beautifully ties together an otherwise pedestrian layout. Major props to the colorist too. (Marie Severin?) — 5. Kamandi #4, DC. One of my fave Kamandi covers. Kirby brings on the danger, the bright red background really pops and we get a very 1970s shopping center, to boot. What’s not to like? — 4. SHIELD #2, Marvel. A blaze of glory....

BRONZE AGE BONANZA: The best of 50 years ago…

Your clearinghouse for the third year of the Bronze Age… 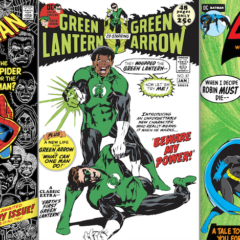