BRONZE AGE BONANZA: ADAMS! KIRBY! KUBERT! KANE! MORE! — Welcome to BRONZE AGE BONANZA — our monthly series that looks at the greatest covers of the Bronze Age — exactly 50 years later. For more info on this feature, click here. — As we’ve seen in other months, Neal Adams dominates here — especially with two of the best covers in comics history. But we also have Gil Kane, Jack Kirby, Joe Kubert and MORE! Dig the TOP 13 COVERS OF OCTOBER 1971 — RANKED: — 13. Amazing Adventures #10, Marvel. The House of Ideas didn’t have the best month, but I dig this because Gil Kane’s Black Bolt looks pretty badass and that monster thing is I just don’t know what. What’s up with Magneto, though? — 12. Archie Giant Series #190, Archie. In Riverdale, Christmas comes before Halloween. Really, it’s a thing! But that’s not why this cover made the list. It’s because… wait for it… FLOATING HEADS! — 11. Tales of Voodoo #18 (aka Vol. 5 #1), Eerie. Now THIS is how you do Halloween. So. Much. Brain! — 10. Girls’ Love Stories #164, DC. Two things: 1) Holy crap! That’s the Three’s Company apartment! 2) Janet’s zombie eyes! — 9. From Beyond the Unknown #14, DC. Until now, I have lived my entire life without seeing the normally somber Joe Kubert do a family of apes — knitting, smoking a pipe, reading the paper and keeping little human pets. My life is now that much richer. — 8. Superman #245, DC. A favorite Swanderson cover — with bonus points for being a wraparound. There’s very little action on the cover, but so what? It looks so damn good. — 7. Superman’s Pal Jimmy Olsen #144, DC. Far-out!! The King inked by Neal Adams. Their styles are practically polar opposites but somehow it all works. Supes across the top really pulls it together. (And I like that both this and Superman #245 are all about the Man of Steel’s wingspan. — 6. World’s Finest #208, DC. Ah, the days when World’s Finest was briefly a Superman team-up book. It’s an arresting illustration by Adams — focus on Superman’s straining face and shoulders — that is also completely, fantastically absurd. It’s the kind of image that you can only find in comics — which is a big,...

Gil Kane, the man of the month! — Welcome to BRONZE AGE BONANZA — our monthly series that looks at the greatest covers of the Bronze Age — exactly 50 years later. For more info on this feature, click here. — Well, Gil Kane had a great month, that’s for gotdamn sure. But we’ve also got some groovy Adams, Wilson, Kirby and more for ya! Dig the TOP 13 COVERS OF SEPTEMBER 1971 — RANKED: — 13. The Microbots #1, Gold Key. No, not the Micronauts — the Microbots. This one-shot was a tie-in to a Kenner toy line that just didn’t catch on. But hey, guess what: It was written by Len Wein! The cover artist is unknown, but it certainly bears the hallmarks of a George Wilson illo, so perhaps it was him. — 12. Star Trek #12, Gold Key. Speaking of George Wilson, here he is with some classic, insane off-model Trek. Ain’t nothin’ wrong with that! — 11. House of Mystery #196, DC. Kids in peril! Of course! It’s a DC horror book! But what the hell is happening here? Did the preciously dressed children follow Fido only to see him get sacrificed by some demonic cult? The exclamation point is the look of recognition on the purple-robed woman: Dick and Jane are gonna be joining Fido in the great beyond! — 10. The Avengers #94, Marvel. The Kree-Skrull War continues with this dramatic tableau pencilled by Neal Adams. — 9. Action Comics #406, DC. The best thing about this cover, other than the fact that it was drawn by Swanderson, is that I could easily re-create it with my Mego Superman. — 8. Adventure Comics #412, DC. Supergirl the fashion plate trots out her superpants outfit. I dig it! By the way, did anyone draw a prettier Supergirl than Bob Oksner? Probably not. — 7. Haunted #2, Charlton. Steve Ditko’s cover for Issue #1 made this list in July and the follow-up is even more inscrutable. But that’s Ditko for you! The funky weirdness really begs you to open the mag. — 6. Conan the Barbarian #12, Marvel. Typical Conan tableau, with the Cimmerian rising above overwhelming numbers as he do. But it’s Kane’s incredible ability to make it all so intimate that makes it soar. The close-quarters combat. Conan’s coiled torso. All the...

BRONZE AGE BONANZA: We flip the calendar on the monthly feature and begin anew…

Your clearinghouse for the second year of the Bronze Age… 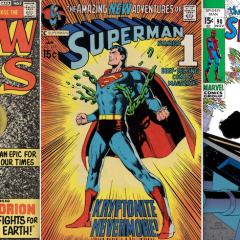