Caesar Rising: CONQUEST OF THE PLANET OF THE APES

Home » COMICS HISTORY » Caesar Rising: CONQUEST OF THE PLANET OF THE APES

UPDATED 2/8/18: It’s APES WEEK! Because this week is the 50th anniversary of 1968’s Planet of the Apes! So all week long, we’re going ape with a bunch of features and reviews — including five REEL RETRO CINEMA columns by Rob Kelly. Rob’s looking back at the original series, with an eye toward select comic-book adaptations. — Dan 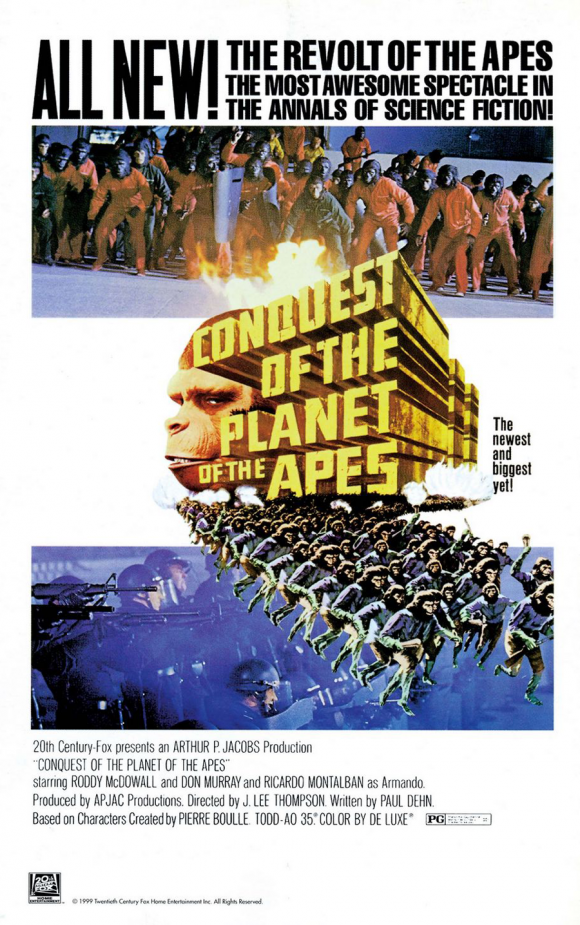 America, 1991: It’s been 10 years since a mysterious disease has wiped out all the world’s cats and dogs. Since humans will always need pets, apes have been drafted into service, domesticated, and even trained to do menial tasks. By the time of Conquest of the Planet of the Apes’ opening scenes, the world is basically running on slave labor—something Cornelius himself predicted in the previous film.

Baby Milo has grown up, and now goes by Caesar (a returning Roddy McDowall, which means he is portraying his own character’s son) and is cared for by Armando (Ricardo Montalban again, charming as ever). When Caesar sees a fellow ape being beaten, he can’t control himself and screams out “Lousy human bastards!”

Armando has to cover for Caesar by pretending that he said it, causing him to be taken into custody. Caesar gets drawn into the world of slave labor, finding himself purchased by Governor Breck (Don Murray). One of Breck’s strongmen, Inspector Kolp (Severn Darden) interrogates and tortures Armando. After being forced to reveal information about his beloved Milo/Caesar, Armando commits suicide by jumping out a window. Caesar, upon learning this, loses all faith in humanity and begins plotting a full-scale rebellion.

Caesar conspires with his fellow apes, systematically taking control of the city. The apes team up to attack and kill most of Breck’s riot police, and then kidnap Breck. He is frog-marched to the town square, where he is to be executed. Breck is given a chance to appeal for mercy, but he doesn’t ask for it—instead, he admits the human race is destined to try and control the natural world and all the creatures in it, for they represent the “ugly beast” that lies deep inside all of them, and it must be whipped into submission.

Caesar’s men are about to beat Breck to death when his love Lisa (Natalie Trundy, who played different, non-ape roles in Beneath and Escape) cries out a desperate plea, making her only the second ape to speak in all of Conquest. It is then that Caesar decides that maybe there is room for mercy, and orders his men to stand down. But, despite this, the human race is now faced with the reality that this is…the Planet of the Apes!

Director J. Lee Thompson (The Guns of Navarone, Cape Fear) found himself with an even more limited budget for this fourth Apes film. Each installment of the series was slightly less successful at the box office than the last, but 20th Century Fox was still determined to produce new films, for they still turned a profit.

Most of Conquest was filmed at a newly built business park in California, which had a vaguely futuristic look. The film moves at such a brisk pace and is so action-packed that you kind of don’t notice the small scale, until you think about Caesar’s pronouncement at the end of the film: that we truly have reached a Planet of the Apes.

There is some talk of similar, coordinated ape revolutions occurring throughout the world, but we never get to see any of them, so it feels a little premature that, after conquering one corner of one American city, Caesar is ready to declare the entire planet now under ape control. 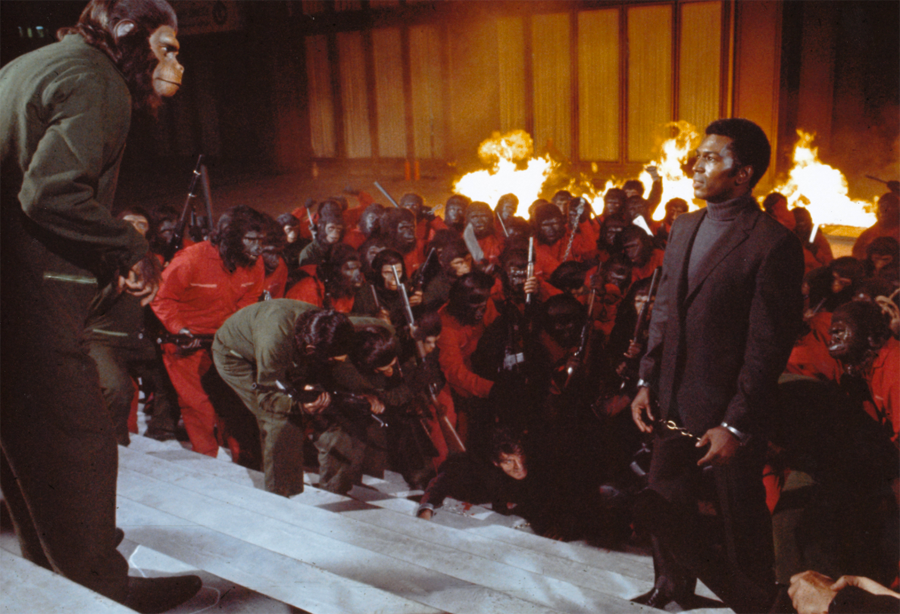 Caesar is confronted by Breck’s aide MacDonald (Hari Rhodes), who sympathizes with the apes but denounces their violent tactics.

As written and shot, Conquest originally ended with Caesar showing no mercy to Breck and the rest and declaring the apes had violently taken over. According to Thompson, after some raucous test screenings in urban markets, the studio thought that was a little too…revolutionary for what was now a kids’ movie franchise, and ordered a mellower denouement.

But, at the same time, they were unwilling to pony up the money for reshoots, so Thompson had to cheat by reversing and re-cropping footage originally shot, and then bring McDowall in to record some new dialogue. We never actually see Caesar’s plea for mercy—instead, we get a super close-up of his eyes, followed by the ape soldiers “lowering” their rifles (actually reversed footage of them just as they were about to crack Breck’s head open).

Despite this patched-together ending, Conquest works pretty well and, like Escape preceding it, it’s amazing how far the studio and producer Arthur P. Jacobs were willing to take this story in such dark places. The MPAA finally caught up with what was happening, and gave the film a PG rating. 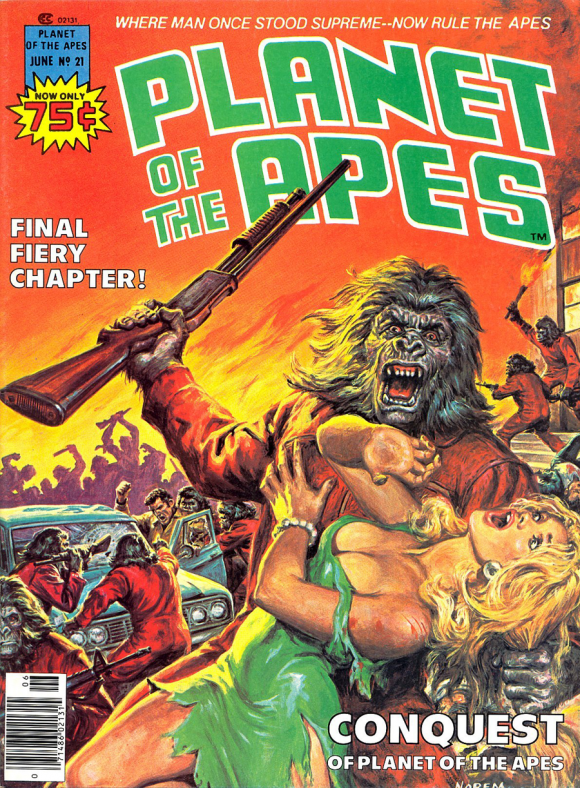 Marvel continued with its movie adaptations, reteaming Doug Moench and Alfredo Alcala, in their Planet of the Apes magazine. The film’s original, grimmer ending can be seen here, since of course Marvel was working from the original script. Combined with Alcala’s heavy visuals, it gives you a great sense of how the original ending might have played before the tinkering. (By the way, check out the cover to Planet of the Apes #21, which features a scene way more lusty than anything actually seen in the film!) 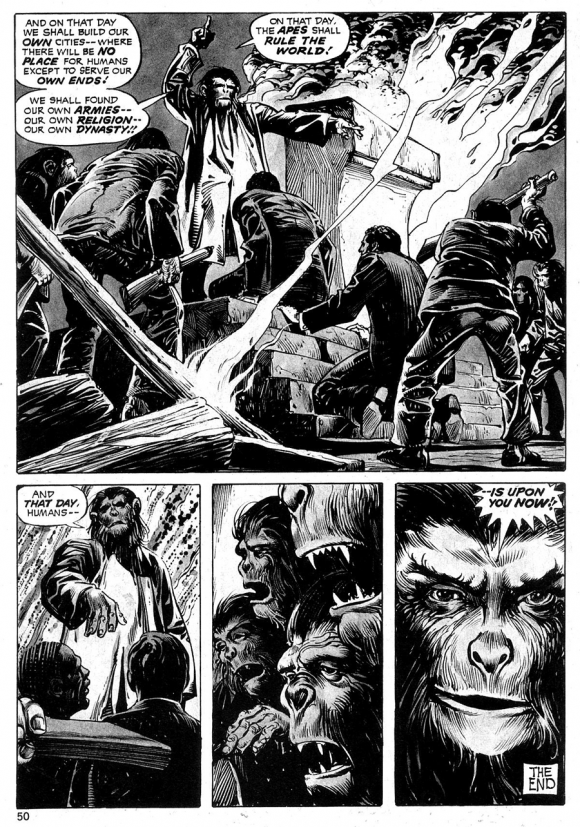 Power Records must have thought this was all too much, since they never produced a book-and-record adaption of Conquest. They jumped right to Battle for the Planet of he Apes (which we will cover next), making the set permanently incomplete for fans of the company and the Apes franchise. I can’t tell you how many years I spent searching for Power’s version of Conquest, so sure that it existed.

Screenwriter Paul Dehn was going on the assumption that Conquest was to be the last film in the franchise, so he purposely wrote it so the series formed a loop. In Planet of the Apes, Taylor wonders how apes came to take over said planet, now we get to see the first steps taken down that road.

But, of course, you can’t quite keep an ape down for long.

NEXT: Battle for the Planet of the Apes. Click here.