Escape to ESCAPE FROM THE PLANET OF THE APES

REEL RETRO CINEMA is back with another APES WEEK installment…

UPDATED 2/7/18: It’s APES WEEK! Because this week is the 50th anniversary of 1968’s Planet of the Apes! So all week long, we’re going ape with a bunch of features and reviews — including five REEL RETRO CINEMA columns by Rob Kelly. Rob’s looking back at the original series, with an eye toward select comic-book adaptations. — Dan 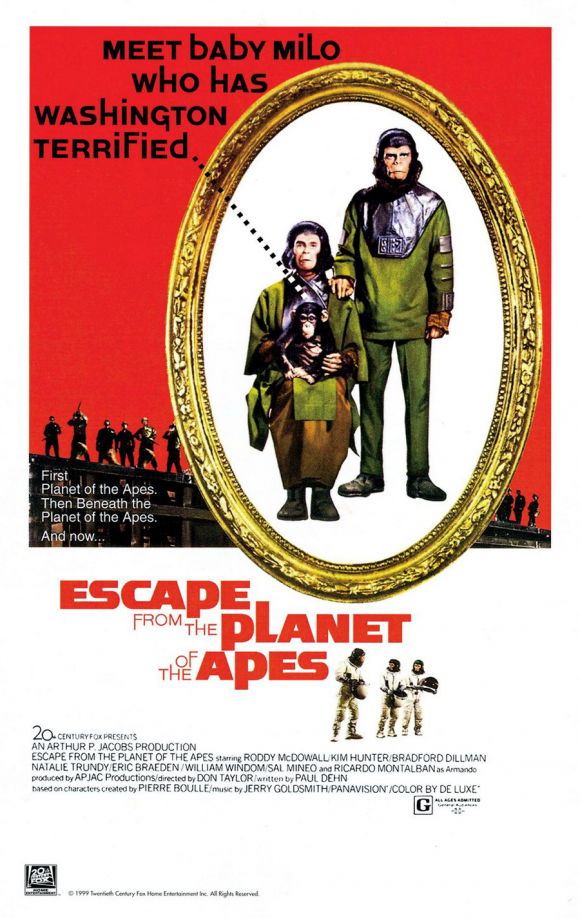 As the story goes, when the box office receipts came in for Beneath the Planet of the Apes, producer Arthur P. Jacobs sent a telegram (for today’s youth: that’s like a text, but with paper) to his screenwriter Paul Dehn: “Apes exist. Sequel required.”

After you’ve blown up the world, where else is there to go? Back into the past, of course! Dehn came up with an ingenious solution: In the opening moments of 1971’s Escape From the Planet of the Apes, we learn that Cornelius (played by a returning-to-the-franchise Roddy McDowall) and Zira (Kim Hunter) managed to escape the nuclear bomb blast, using the spaceship that brought Taylor to their timeline to get off planet. The shockwave sent them back in time, landing on Earth circa 1973. As you might expect, the U.S. government is more than a little shocked to meet these…these…apeonauts!

Accompanying Cornelius and Zira is the brilliant but timid Dr. Milo (Sal Mineo), but he is killed while in the government’s “protection” (apparently the troubled Mineo was hoping appearing in an Apes film would give his career a boost, but he found the make-up so uncomfortable and taxing that he asked to be dismissed from the project, hence Milo’s seemingly out-of-the-blue death).

At this point, Escape flips the script from the first film—here, it is the humans who can’t believe that apes can talk, and have to be convinced they are not just parroting what they hear around them. Eventually, the humans start to accept the chatty Cornelius and Zira, and even begin to be charmed by them. They become celebrities! 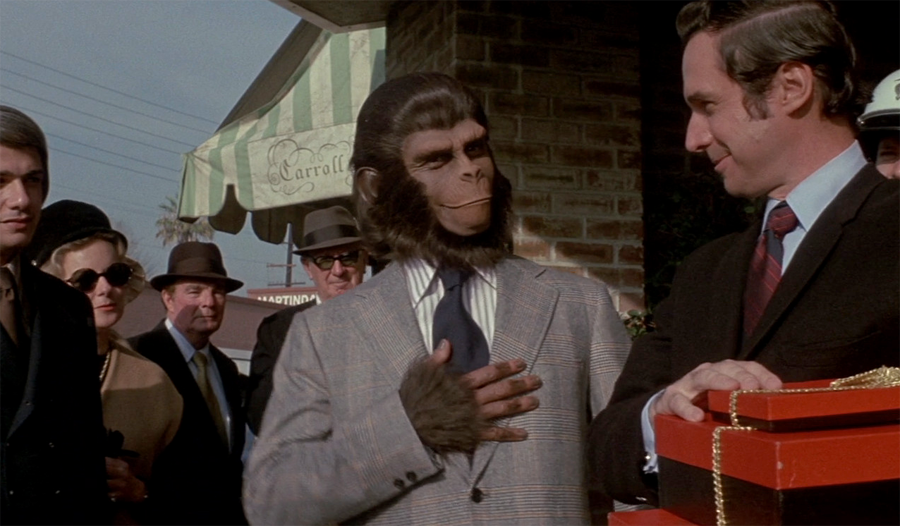 But not everything is rosy. Presidential science adviser Dr. Otto Hasslein (Eric Braeden)—mentioned by Taylor in the opening scene of the first film—is suspicious of Cornelius and Zira, thinking (correctly) that they are not sharing everything they know when it comes to Earth’s future. He’s worried that the planet is headed toward a grim future, and is even more alarmed when Zira reveals she is pregnant. Will this baby be the point of the spear when it comes to apes taking over?

He tries to enlist the president (great character actor William Windom) in his theory, but POTUS seems pretty sanguine about the whole thing—maybe humans are destined to be ruled by apes! Hasslein takes it upon himself to get Zira drunk, where she reveals some of the grisly details about how humans are treated by apes once they are the underclass. I especially liked these scenes between Hasslein and the president, because they play out in a way we don’t expect—here it’s the scientist that is aggressive and violent, while it’s the politicians who are measured and kind. This truly is science fiction!

When Cornelius accidentally kills a human (who unwisely mocks him as “a monkey”), the president finally goes along with Hasslein’s plan, and orders Zira’s pregnancy terminated. Cornelius and Zira befriend a circus owner named Armando (Ricardo Montalban—Khan himself!) and gives birth, naming the baby Milo, after their deceased friend.

In a final sequence so grim and violent it is simply unbelievable this film is rated G, government agents track down Cornelius and Zira hiding on a cargo ship, shooting them to death. They die in each other’s arms, and the “baby” falls into the ocean, to its death. Except, in the final scene, we see that the baby was switched at the circus, and Milo is alive, now in the care of Armando. The final word of the movie is an infant Milo asking, repeatedly, for “Mama.”

Like they did with Beneath, 20th Century Fox cut the budget for this third Apes film. Moving the story to modern day meant the production only needed three ape make-ups and no special sets, a crafty move on the production side. The lack of funds is pretty obvious in the aforementioned final shot when we see Milo talk. It would seem that director Don Taylor was so strapped for either time or money that he was forced to “cycle” the footage (running it forwards, backwards, then forwards again) of little Milo crying out for his mother, giving what is supposed to be a powerful moment an inadvertently comic, Ed Wood-ian touch. Other than that, the lack of sci-fi visuals isn’t really a problem.

What Escape lacks in visual invention, it makes up for in an involving story. We are always on Cornelius and Zira’s side, and as the film rolls on we see humanity living up (or down) to its reputation as an unthinking, violent, clumsy group of boobs. If this was the society Taylor left behind, you can’t blame him for being such a Debbie Downer!

It seems hard to imagine a grimmer ending than the one in Beneath, with Charlton Heston blowing up the world. But in many ways Escape is worse, because we have—over the course of three films—come to love the kind, gentle, and intelligent Cornelius and Zira, and watching them get unceremoniously gunned down packs a real wallop. As the camera pulls up over the dying bodies of these noble beings, you wonder, how much darker is this series going to get? 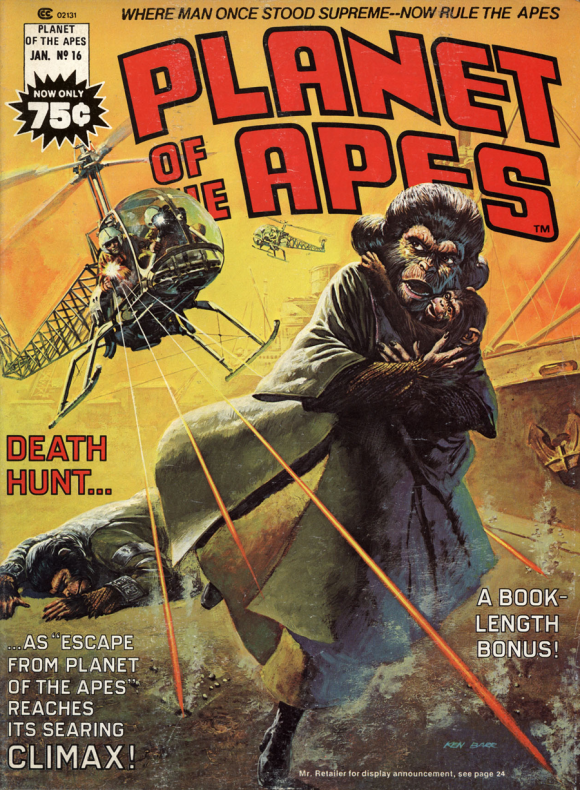 Marvel adapted Escape in Issues #12-16 of their black-and-white Planet of the Apes magazine, again written by Doug Moench but with art by Rico Rival, whose ever-so-slightly exaggerated illustration style seems, to my eyes, a little at odds with the grim, grim, grim material. It must have been hard to adapt this particular installment, because the film is so talky and, compared to the previous two movies, action-free. Still, Moench keeps things moving, and adds some material here and there (an extended opening scene in space, for instance) to spice things up a bit. 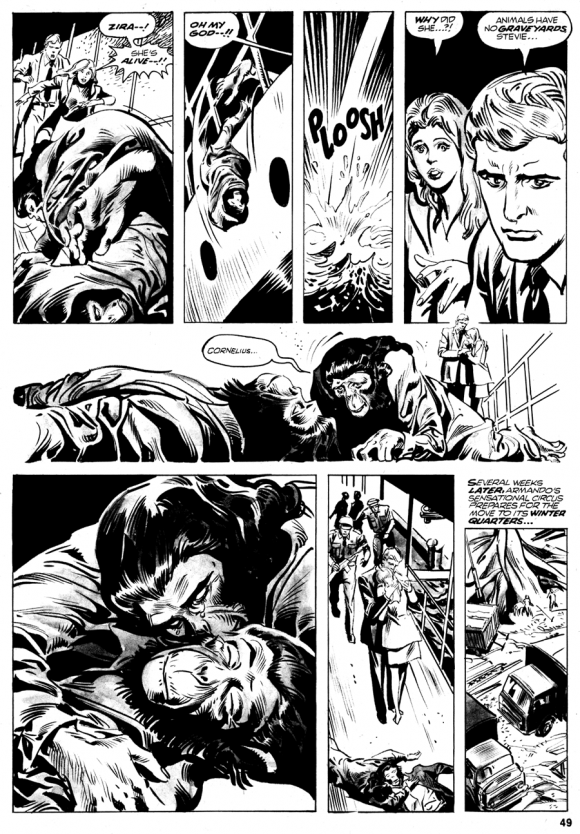 As hard as Marvel must have had it, it was probably nothing compared to the poor folks at Power Records, who had to find a way to convert this bloody, pessimistic, almost nihilistic story into a children’s record! Cornelius and Zira still get it in the end, but the final scenes are laid out in such an oblique way it hides the violence as much as possible. 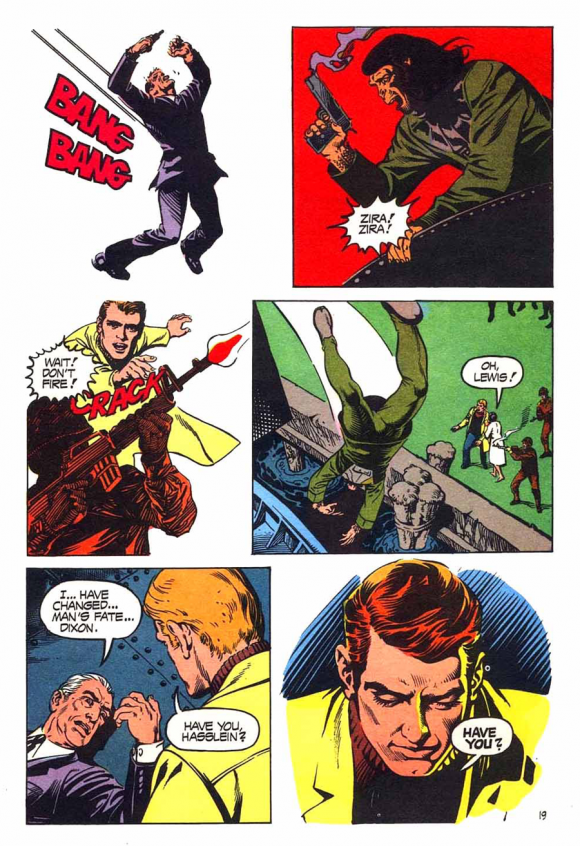 Despite its occasional lapses of ham-handed comedy, and its general feeling of cheapness, I think Escape From the Planet of the Apes is an improvement over Beneath. Sure, the latter is more pure, goofy fun, but this third installment at least tries to do something new with the series, and not simply regurgitate the stuff we loved from the first film.

McDowall and Hunter—despite the make-up—are recognizably human, and have a wonderful chemistry. It’s too bad their characters exit the series the way they did.

NEXT: Conquest of the Planet of the Apes. Click here.

Rob Kelly is a writer/artist/comics and film historian. He is the co-host of Aquaman and Firestorm: The Fire and Water Podcast, the host of The Film and Water Podcast, and the host of TreasuryCast. He thinks Ricardo Montalban is underappreciated in geek circles: the guy fought Captain Kirk, Wonder Woman and appeared in two Apes films!