Out With a Whimper: 1973’s BATTLE FOR THE PLANET OF THE APES

Home » COMICS HISTORY » Out With a Whimper: 1973’s BATTLE FOR THE PLANET OF THE APES

REEL RETRO CINEMA: Who needs nuclear war when you can bore everyone to death?

UPDATED 2/9/18: It’s APES WEEK! Because this week is the 50th anniversary of 1968’s Planet of the Apes! So all week long, we’re going ape with a bunch of features and reviews — including five REEL RETRO CINEMA columns by Rob Kelly. Rob’s looking back at the original series, with an eye toward select comic-book adaptations. — Dan

Battle for the Planet of the Apes, the fifth and final Apes film, opens in the 27th century(!), where the Lawgiver (played by legendary film director John Huston!) is telling a group of children about Caesar (Roddy McDowall once again), the ape who tried to cultivate peace between simians and humans after the fallout of a nuclear war.

Of course, there’s always some ape who doesn’t get the memo, and wants to keep fighting. This time around, it’s a gorilla general named Aldo (the fearsome Claude Akins), who plots against Caesar and wants to kill off the remaining humans. 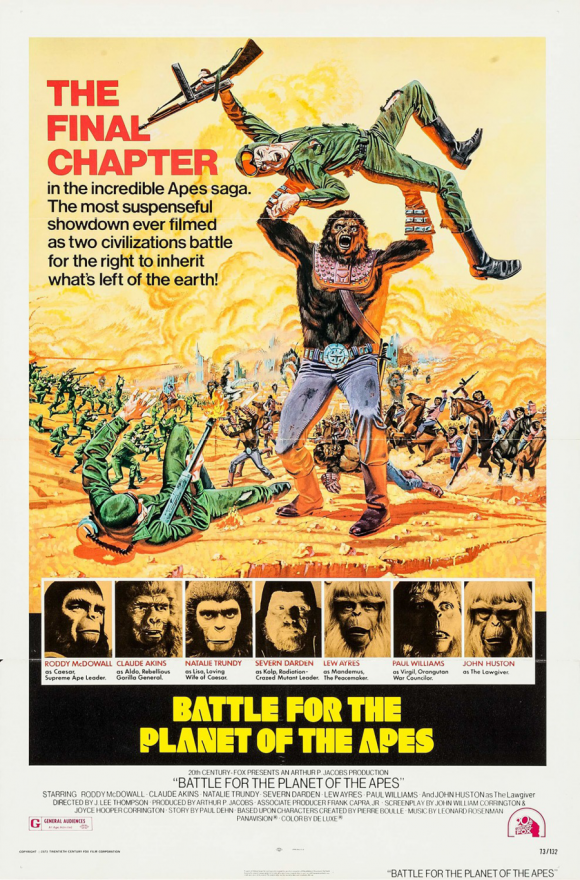 Caesar now has a son, Cornelius, after his late grandfather. Never having known his parents, Caesar can’t resist visiting the Forbidden City after he learns it contains historical archives that contain information about them. Caesar and his orangutan friend Virgil (Paul Williams) run afoul of Governor Kolp (a returning Severn Darden), who is in charge of a small pocket of radiation-scarred humans. Kolp considers Caesar’s trip to be espionage and, like Aldo, seems to want to start a war, despite others begging him not to.

Teenage Cornelius overhears Aldo’s plot to overthrow Caesar. Aldo attacks Cornelius, leaving him gravely wounded. He eventually dies, but not before letting his father know of Aldo’s plans. At the same time, Kolp launches an offensive against Ape City, but Aldo and his well-trained army kill him and his men. Aldo then announces he wants to kill the remaining humans that have been captured, but Caesar refuses. Virgil informs Caesar of Aldo’s responsibility for Cornelius’ death, meaning he broke the most sacred law of their society—“Ape must never kill ape.” The two square off, leading to Aldo’s death.

Caesar then frees the humans, but they demand to be treated as equals. It is in this moment they decide to forge a new society, one where humans and apes will live together in harmony. Flash-forward (or back?) to the Lawgiver, finishing the tale of how Caesar finally brought peace, a peace that has existed for hundreds of years. The film ends on a shot of a statue of Caesar, which is shedding a single tear. It’s the end of the movie, and the entire original Planet of the Apes series.

Unfortunately, the Apes franchise goes out with a whimper, not a bang, for Battle is by far the weakest entry of the series. Returning director J. Lee Thompson found his budget so constricting that he had to fake the massive battle that ends the movie, but he could only do so much: It’s readily apparent that we’re looking at a few dozen people at best, driving around in the same couple of armored vehicles. This major conflict that will decide the fate of the planet looks barely bigger than something you’d see at a LARPing event.

The vision we get of the humans and apes having achieved a fragile(?) peace is a nicer, more gentle away of ending the series, as opposed to the dark violence of Conquest of the Planet of the Apes. I guess you could argue after four films of apocalyptic endings, Battle offers a nice change of pace. But getting there is pretty rough. The scenes have a perfunctory, sluggish energy, like the filmmakers just couldn’t think of much new to do with these characters or situations.

Roddy McDowall is charming as usual (no matter what ape he’s playing), but Severn Darden as Kolp is just too lackluster as a villain, and his constant attempts to chase after the apes just seem laughable: It’s a big planet! Why don’t you just leave Caesar and his people alone, and go move to some other part of the world?

And unlike Beneath’s General Ursus, whose promise of “naked, merciless force” (look for this as a U.S. presidential campaign slogan in 2020) was combined with a plausible (if frightening) magnetism, Claude Akins’ Aldo seems too much of a brute to plausibly lead a true planet-wide revolution.

After skipping Conquest, Power Records came back to the world of the Apes with a straightforward adaptation of Battle, complete with ambiguous ending. 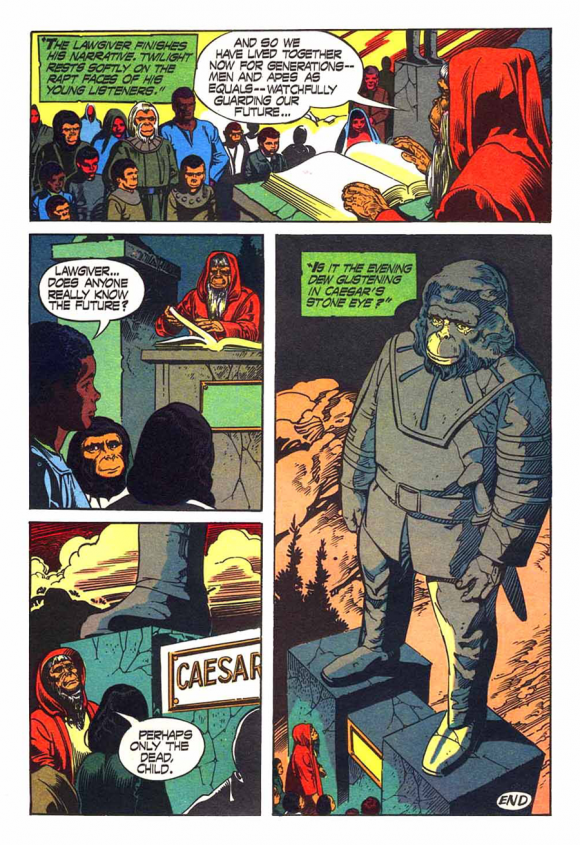 Marvel’s version (by Doug Moench and Virgil Redondo), which ended in Planet of the Apes #28, skips the whole Crying Caesar bit entirely and ends on a much more downbeat note, with apes and humans still beating the crap out of each other, while the Lawgiver watches from above. Face Front, True Believers! 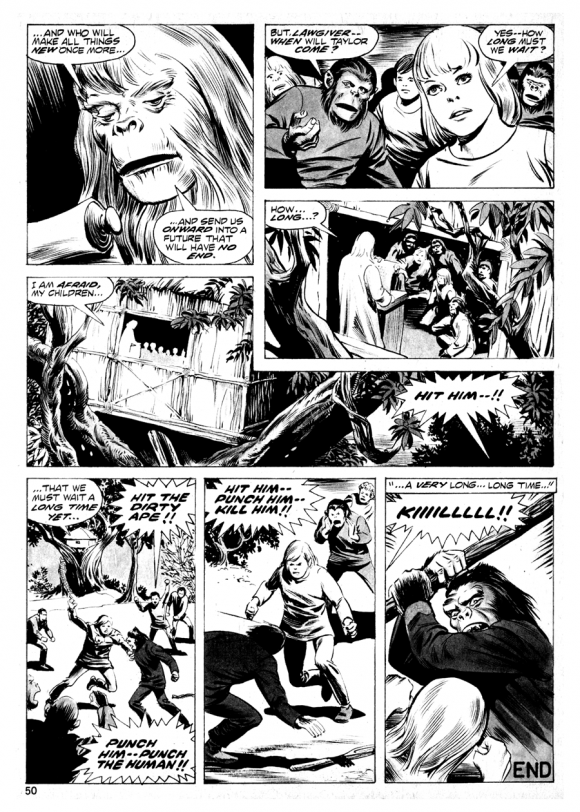 Marvel’s Planet of the Apes magazine would last only one more issue before being cancelled and then revived as part of their color line, under the name Adventures on the Planet of the Apes, which reprinted the first two movie adaptations. 20th Century Fox would unsuccessfully try and follow the films with a live action TV series and a Saturday morning animated one, neither of which would last longer than a season.

But by then the whole Apes concept had burned itself into the popular culture—20th Century Fox reissued the films, Mego was cranking out action figures and playsets, and merchandisers were learning that movie tie-ins could be financially profitable, something pretty much unheard of before the Apes films. This was a lesson George Lucas would take major advantage of just a few years later, for his sci-fi franchise.

Despite fluctuations in quality between films, the Planet of the Apes series still remains highly entertaining, even after all the spoilers have long since been revealed. The basic themes inherent in the story of human hubris coming back to haunt us remain potent and durable, as the current Apes series of films can attest.

Five decades later, people still want to visit a Planet of the Apes. 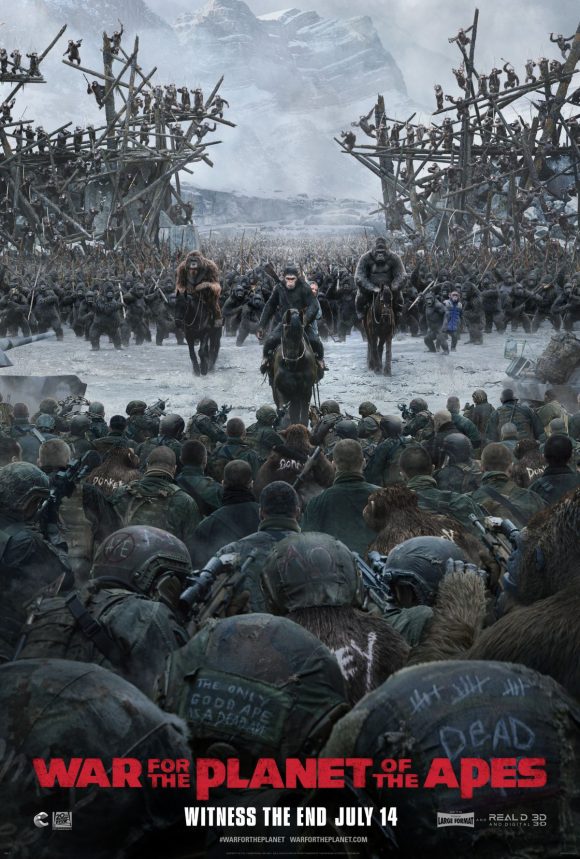