Buzzkill co-creator Donny Cates is a guest at SuperMOOC 2. He stops in today with a guest column on the topic du month.

Hey all! I’ve been asked to talk about my book Buzzkill, my influences, and how addiction is presented in comics.

Now obviously there are the layups in this category: The first and most notable entry dealing with addiction in comics is obviously The Amazing Spider-Man: “Green Goblin Reborn!” (Issues 96-98, 1971), in which Harry Osborn is revealed to be a “strung out pill popper” (although it’s never quite explained what kind of pills they are…)

While not the most realistic or in-depth depiction of addiction, it is notable for its rebellion against the Comics Code Authority. Showing the comics community, the fandom, and The Man that comics can be used to highlight social issues, while also educating the kids about the dangers of illicit pills of indiscriminate substance or effect … or something …

(In regards to Buzzkill, at one point in this story Spidey catches an addict on a rooftop (dancing far too dangerously) and admonishes him by saying: “I would rather face a hundred super-villains than throw my life away on hard drugs, because it is a battle you cannot win!” In one sentence, Stan Lee accomplishes what took me four issues to hammer home. Don’t do drugs kid. You won’t win.)

In light of this story, the Comics Code Authority changed its regulations concerning drugs. Whereas in the past any depiction of drug use was banned — now the Authority would allow the depiction of negative drug use and addiction. Which leads us to this: 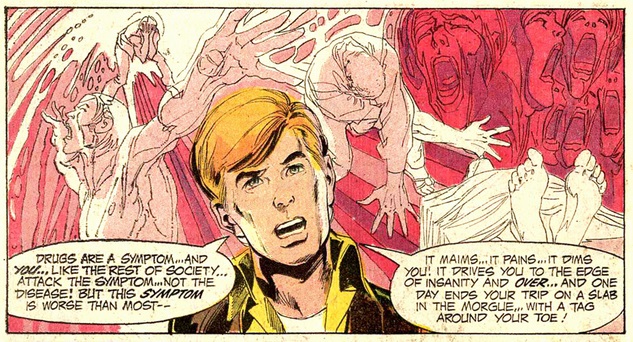 Again, took me four issues to do what this panel did.

Denny O’Neil and Neal Adams’s “Snowbirds Don’t Fly” storyline (Green Lantern/Green Arrow #85 & 86, 1971) broke new ground in comics. Not just for its shocking cover (featuring a strung out Speedy – in the midst of mainlining heroin!), but for its mature and responsible exploration of real social issues. This was not a trippy, vague pill addiction with a morality tale ending; this was HEROIN. With a storyline as muddy and complicated as addiction itself. Oliver Queen didn’t magically cure Roy with a “Sobriety Arrow” (dibs, btw) — no, Ollie gently took his ward in his arms and together they worked it out… 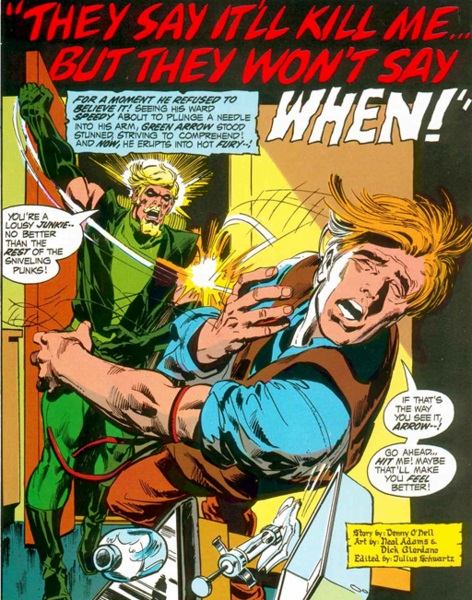 Ollie totally punches him in the mouth and throws him in the street! Doesn’t get much more “real” than that. This was an immensely groundbreaking storyline that changed the way we viewed comics from that day forward. All of a sudden comics could tackle social and political topics with the care and attention they deserved. The story also elevated Green Arrow into an incredibly rich and complicated character that remains compelling and socially relevant eve- 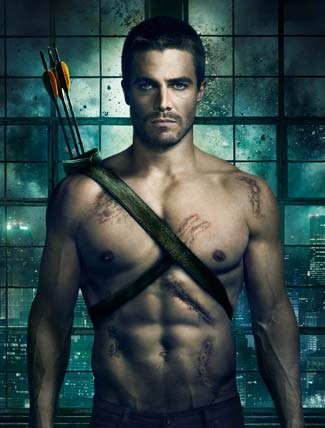 As illustrated in the stories above, addiction in comics is hardly a new thing. I came up against this when pitching my book Buzzkill. It was compared to “Hancock” at first glance, then to “Demon in a Bottle.” Both completely valid arguments: These stories are about alcoholic superheroes (or immortal space aliens? I don’t know…Hancock was confusing). 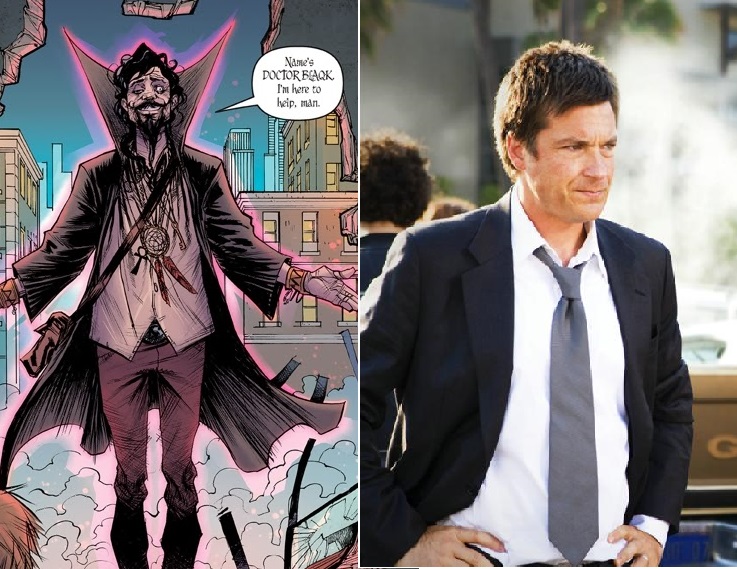 What I find interesting, is using addiction as a way to define superheroes. Batman leaps to mind immediately. Denny O’Neil had an AMAZING run on Batman called “Venom” (Legends of the Dark Knight, Issues 16-20, 1993) that dealt with Batman becoming physically addicted to a drug called Venom after failing to save a child because he wasn’t strong enough. Now that’s a powerful metaphor in and of itself, but what it shows is how Batman is an addict at heart. Lots of people’s parents die – and that’s a horrific thing to happen to a child – but most of them don’t grow up to be a giant rage monster dressed like a bat, who punch evil in the neck every night. (This is just my theory, you can hear O’Neil speak about his work in this very course!) You could say that Bruce is addicted to justice, but I think it’s deeper than that. I think Batman is addicted to pain. Every night he relives the most destructive moment of his life; every person he fails to save was because he was too weak. Every night, he becomes that weak little boy who couldn’t stop his parents’ murder. And he does all of this to himself. Bruce doesn’t want to be Batman, he has to be Batman. If those aren’t the actions of a junkie, I don’t know what are.

From here, we can explode the idea of superheroes as addicts until we’re blue in the face. The Hero’s Journey and The Twelve-Step Program share common through lines: redemption, struggle, learning to become a new person, helping others. It’s no wonder comic book creators have mined the territory of addition so many times.

When handled with care, addiction can serve as a powerful metaphor for the struggle between responsibility and power. It’s complicated stuff. For example … a skinny blond kid gets his powers from drugs and becomes an immensely powerful hero:

BUZZKILL is published by Dark Horse and is co-written by Cates and Mark Reznicek. Art by Geoff Shaw. The trade comes out in stores April 2 but is available in issues.