Legendary comics writer and editor Denny O’Neil is one of Christy Blanch’s first guests for SuperMOOC 2, which starts today. The first module’s topic is Addiction, and O’Neil has provided us with this haunting rumination: 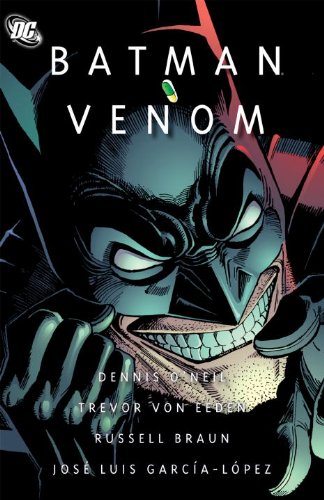 Consider this mask, one that exists out of time, and covers the face of a man who uses it to hide his identity and believes it hides his true self because he believes he knows who his true self is.  It is wet, this mask.  The man who wears it is underwater, inches from a child who is drowning.  The man struggles to lift the boulder that keeps her at the bottom of the crater.  He  is strong, the man is, but the boulder does not budge.  He sees that the child has stopped moving.  Her mouth is open, her eyes stare sightlessly, and he knows that she is dead and still he struggles until he is exhausted with barely enough strength to swim to the water’s surface where he gasps and  pulls himself onto the dirt.

And time and reality congeal and spin and shudder and–

No mask. It is him, it is the hero, but  his body is not trim and muscled and the only things on his face are a pair of glasses and a blemish.   He is not trying to rescue a child–that will not happen for decades.  But he is struggling.  He wants to move away from the wall behind him and join his classmates chattering and cavorting on the dance floor. the girls lovely in summer dresses, the boys handsome in linen and khaki.  He wants to join them, but he knows himself to be homely and awkward and so he would be unwelcome and so he does not move.  Some charitable person puts a glass of wine in his hand and–

–time and reality spin and shudder and–

The hero has found what he needs.  A pill.  A little white capsule that he can swallow whenever he likes and his muscles will welcome new and splendid strength and energy will surge through him.  He could move that boulder now, oh yes.  He could shove aside any obstacle and do whatever has to be done and no children will ever die again, not when he is present.  The pill.  He is never without the pill.

He is at a party, standing in the middle of someone’s living room, his body tilted at a forty-degree angle, the glass in his hand trembling, but losing none of the precious liquid within, and he begins to sing–

His pockets are empty and the pills are at home, in a hidden cabinet.  The road ahead is empty except for an orange pickup truck, visible in the beams of his headlights, it’s front end smashed against a tree just off the pavement.   Plenty of time to see if anyone is inside, plenty of time to rescue any victims.  But the pills are ahead, let others do any rescuing that needs doing, he is not his brother’s keeper–

He steps from the lobby of the building where until ten minutes ago he was employed.  Another job gone. Last night, another relationship gone.  A marriage nothing more than a fading memory.  The pain is enormous, but it can be remedied.  It is early afternoon and the liquor stories will be open.

The spinning stops, the shuddering quiets, and he is one person, not a hero, no, far from it: a lonely, skinny man, pale skinned, watery eyed, alone and beyond desperation, wishing that he had a mask, any mask that would hide himself from himself, staring at the half-empty bottle.

Denny O’Neil’s most famous work on comics and drugs is Green Lantern/Green Arrow #85 amd #86, part of the SuperMOOC 2 curriculum. 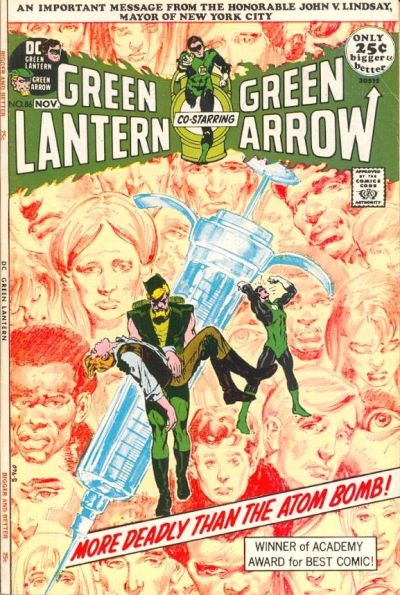