We continue our profiles of Those Who Kept the Batsignal Lit in anticipation of the 11/11 release of Batman on Blu-ray and DVD. (And, hey, check out my review of the set!) 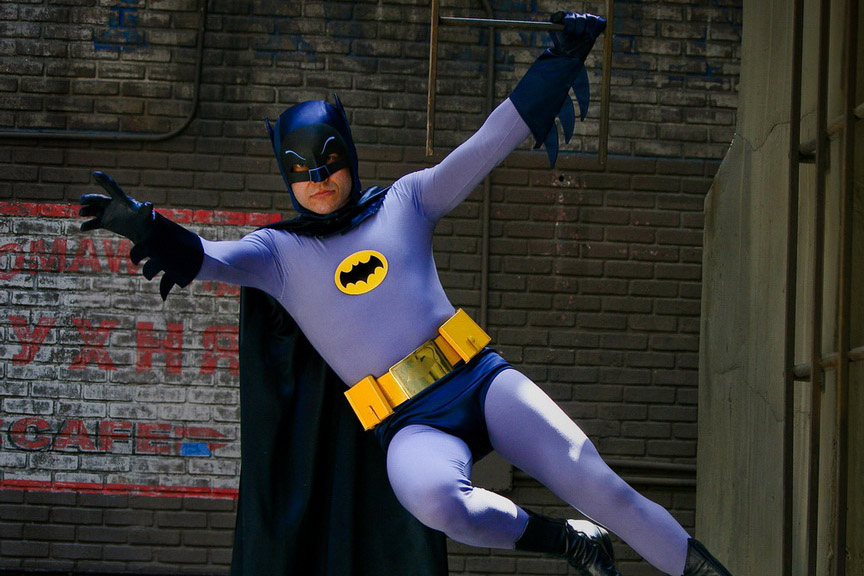 Scott Sebring just turned 50 this year, which means he’s only slightly older than Batman ’66 itself. He was born and raised in Bradenton, Fla., but moved to Southern California nearly 30 years ago to join a band. He’s also a graphic artist, photographer, sound engineer and says he still writes, plays and records music when the mood strikes. He also cosplays as Adam West’s Batman at conventions, charities and good causes. He tells me, “I’ve been married to the girl of my dreams for nearly 25 years and we’re still going strong. I may be a geek but at least my life isn’t boring.” Check out his blog here.

Scott Sebring: All the way back to the first run on ABC growing up in Florida but I was barely 2 years old when it started. But I do have vivid memories of loving to watch it even then. You cosplay, you do appearances, you have an epic collection, you help run the Batman ’66 forums, you have Bat-musical instruments. Tell me how you got into all that. What inspired you to do it?

I actually started collecting action figures and those sort of toys in the late ’90s after my wife and I got our house and I had my own “man-cave” to decorate as I wanted. It wasn’t just Batman although he definitely took up more room over time.

Around the year 2001, I went to San Diego Comic-Con as I did every year (before the days of me attending in costume) and wanted to find a Corgi Batmobile to add to my room decor. I looked all around the convention and couldn’t find one but I did come across the original 1966 No. 1 Batmobile from the show on display. That blew me away to see that. It was an overwhelming feeling … my connection with the TV show Batman really hit home at a very core level.

A few months later, I customized one of my keyboards in the fashion of the Batmobile. Costume stuff didn’t come until a few years later, in 2003 shortly after joining the original 1966 Batman Message Board. I was looking to buy or construct an Adam West-style cowl and found the place. I eventually bought one from Wally Wingert, met him and that led me down the road to putting together my first costume. The rest kind of snowballed from there. Scott and another friend

I never denounced the show although for a brief time I tried to accept all things Batman including the late ’80s comics, ’90s movies and so on. But I think that led to my diminishing interest in the Batman comics and other media although I did and still love the Bruce Timm animated series.

Nowadays, I’m not interested in the stories where Batman is too brooding, controlling or dysfunctional but will gladly watch or read a story that appeals to my personal sensibilities. The Nolan films are certainly not one of them. They are not my cup of tea at all and I’m probably more prone to denounce those. Not so much that they are bad films for those who dig that sort of thing but I think they are terrible Batman films because his detective skills, moral center, dedication, developed mind, excellence in science and the like are grossly diminished to where the character doesn’t read as any form of Batman to me personally. If that’s what you like, OK, but I think it’s a poor representation of what really made that character so great for over 75 years. Interesting character study but ill-developed super hero. I will admit that I did enjoy Gary Oldman as Gordon. That was done well. Scott and a whole bunch of friends

Gotta have that Blu-ray! When the 1966 movie was released on Blu-ray, my eyes blew up. And from what they’ve shown so far, these look like they will look even better!

Having the Batmerch in this day and age is awesome. My main nit-pick is that too many companies are not bothering to consult with of the hundreds of 1966 Bat experts out there for any quality control before releasing stuff. Mattel in particular with their Batcowl or Hot Toys with their high-end figures.

I have to admit I can’t afford everything but I’m good with that. I have the Mattel figures, the NECA Batman, a score of T-shirts and assorted items for sure. And I’m enjoying the Batman ’66 comic by DC. It’s always a toss-up between two adventures: Hi Diddle Riddle and The Purr-fect Crime. High Diddle just had that production value, time and money they never had again on the show and the script set the stage for the series. Meanwhile, by the time Purr-fect came around, the costumes were fine tuned to what I believe the best they ever looked on the show. Adam and Burt are in full stride with their portrayals of the Dynamic Duo as well and it shows.

I find the Nora Clavicle one pretty unwatchable. The show is just a self-parody by this point and it just seemed like the producers didn’t even care for any quality by then. The city background at the end looked like it was drawn on a chalkboard. Adam, Burt and Yvonne did what they could with what they had, bless them. 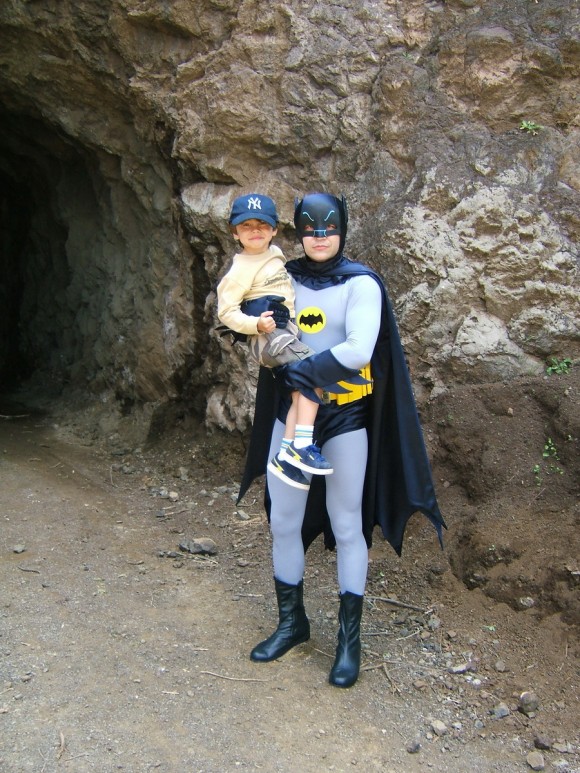 Can’t do it. Love so many of them for different reasons.

I don’t think anything has really changed except for some of my dismay over the quality of the third season. As a kid I didn’t notice so much. I love Yvonne and wish she got to have the luxury of the first-season approach.

A trusty Batarang is always good although not quite a gadget I guess. So I would say the Batcomputer. 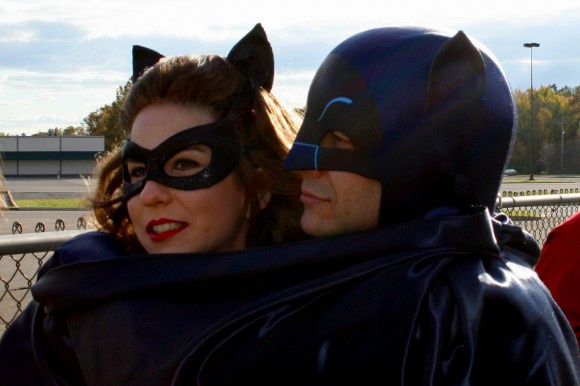 I always liked the low-tech ones, like the oncoming train one in False Face or the pending stampede in the Shame one or the one where Batman and Robin are behind the targets of the shooting gallery and may get shot by Gordon himself. No specific one stands out, though, but I love that particular approach. One that comes to mind is when Batman gets down on one knee to talk to the little boy after the near-fatal cattle stampede. I loved that one on one. It showed character and encouragement. Especially at the end, with the boy once again in Gordon’s office. I’ve used that as a model for when I encounter kids at shows. It means a lot to me. 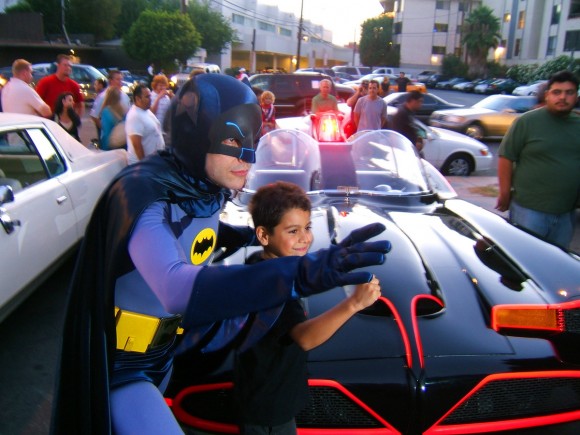 Who would have thought that we’re experiencing all of this new ’66 Batfun nearly 50 years later? It’s an exciting time! The best is yet to come! 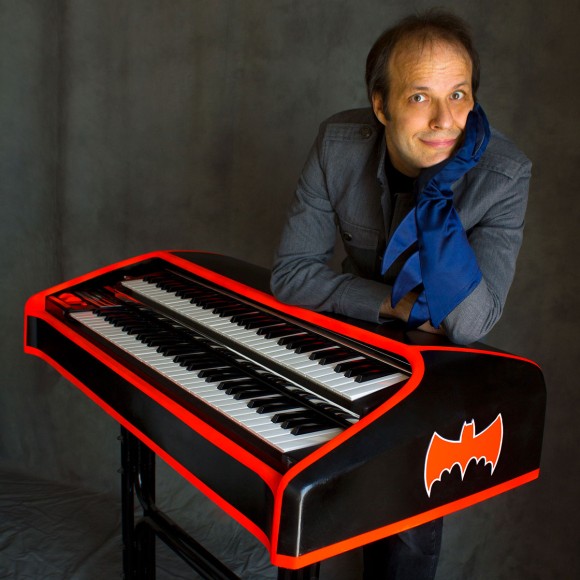