BATMAN ’66 WEEK has been an utter joy (and now extended through Sunday!)  and part of that has been getting to talk to so many other Batman ’66 devotees. One of the most generous of spirit has been Batman ’66 artist and sculptor Ruben Procopio.

It’s all Ron Marz’s doing. Earlier this week, the writer mentioned that when he visited Ruben in L.A., they checked out the Barris garage. This, I told Ron, was a guy I needed to talk to, and he hooked us up.

Long story short, over the next several days, Ruben provided a treasure trove of artwork and photos, along with his own sort of commentary track, explaining his relationship with Adam West, his startlingly accurate sculpting work, and his approach to drawing the Batman ’66 comic. And like the rest of us, Ruben was overjoyed by Wednesday’s news that the show will finally get a home-video release. 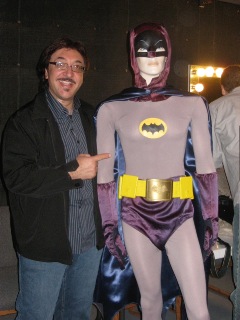 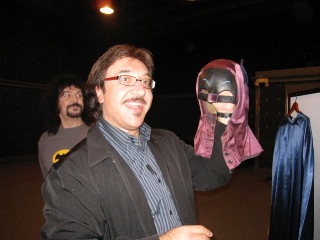 “I’m so happy to finally see this happening, most of all that Adam West, Burt Ward and the remaining cast members who are with us also get a chance to enjoy the news as well,” he said. “Can’t wait to play through the shows and hopefully hear their commentary as well.

So here’s Ruben and his work. I’m sure you’ll dig it as much as I do. (And you have GOT to check out his work at Masked Avenger Studios):

I was around age 5 when my parents came to America in the mid 1960s, and one of the first things I saw was the Batman TV show and it made a lifelong-lasting impression. Along with many other viewers, I thought the show was real. Not until years later did I understand what “camp” was. It’s hard for me to pick a specific, (favorite) episode or moment, but I can say what mesmerized me was the art direction of the show. The colors, costumes, Batcave, Batmobile, settings, gadgets, etc. — all of it was appealing. It created an obsession throughout the years to collect anything related with that show and Adam West.

Fast forward many years, that show, comics and animation were among many inspirations to become an artist. One of the most rewarding collectables I ever sculpted and produced was the Adam West bust. Talk about surreal: I found myself sitting poolside next to Adam at his agent’s home discussing the deal. That began a friendship with Adam himself. We later sat side by side at a convention, and the local TV News was interviewing him. I overheard him say in his own inimitable way “… and yes, I have my own personal sculptor” — referring to me, wow! 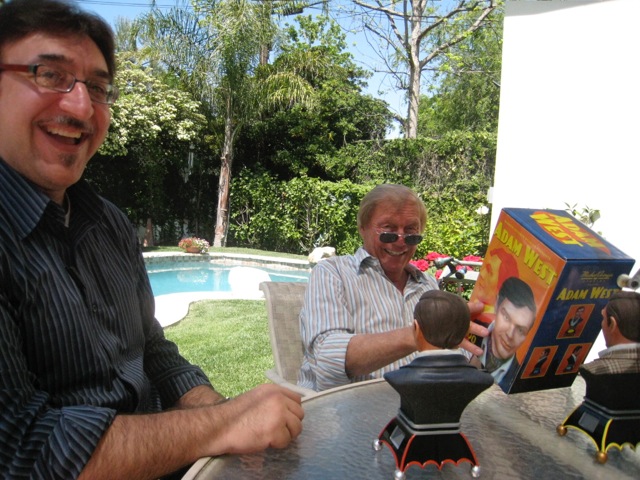 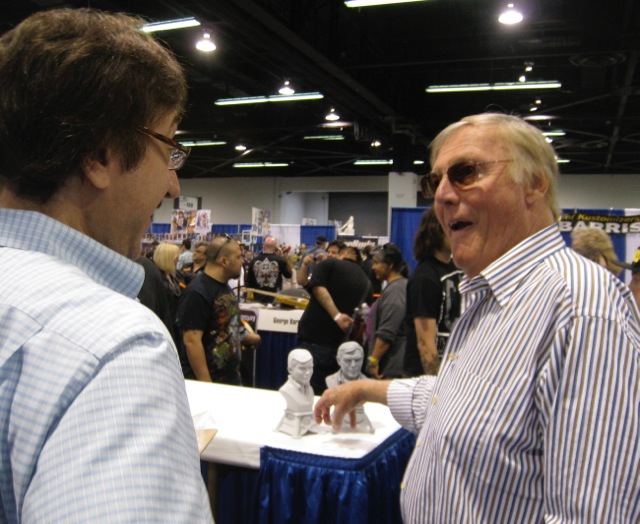 So far the approach I used on each of the stories I’ve done is different. It depends on the story and whatever medium either strikes my fancy at the time or feels right for the story. With the Sandman story (digital issues #13-14, print issue #5), I drew it out all traditionally in pencil and ink. The Tut story was all drawn digitally. 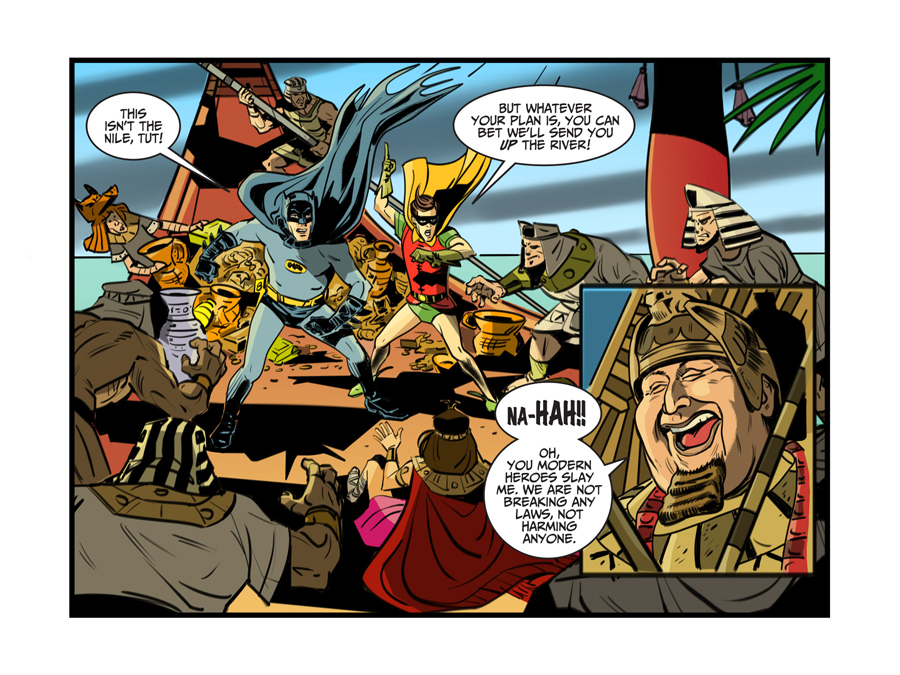 King Tut storyline was in the digital-first issues #22-23. It will appear in the print issue #8 next month.

I have an upcoming Shame story all done in watercolors. It’s great working with editor Jim Chadwick and with writer Jeff Parker. Jeff really “gets it.” One of my greatest pleasures is receiving a script, reading through it and coming up with visuals. It’s one of most thrilling parts of the process and one of the scariest, hoping I capture the right image for the story. I thank Jim for letting me experiment with different styles and approaches. There were so many goons and bad guys in the Tut story, I drew a character line-up sheet, similar to the ones I had when doing feature animated films. Helped to keep track of everyone and size relationships too.

Here is picture of the Adam West bust on my sculpting table surrounded by my ‘shrine’ of photo reference. As you’ll notice on the top right are some turnaround pics from Adam’s screen test photo shoot. All were very helpful reference while sculpting this bust. 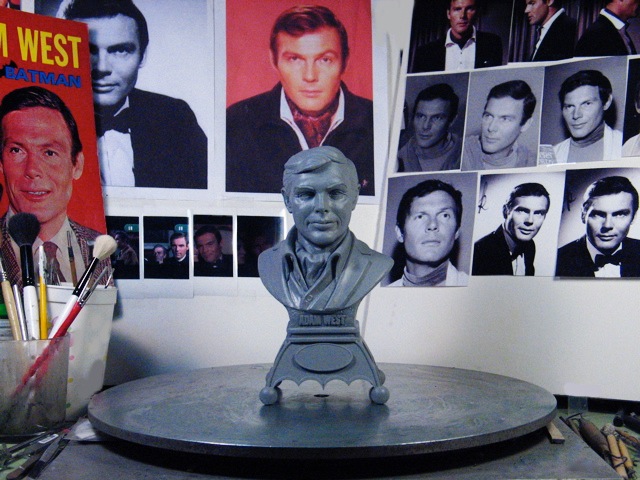 I’ve also sculpted a bust of Burt Ward, part of a line of busts through Masked Avenger Studios called Really Retro, a tribute to the actors who played our heroes and villains of yesteryear. This bust has not been produced so it’s not for sale … but here’s a sneak peak of Burt and me with a prototype of it at a convention. 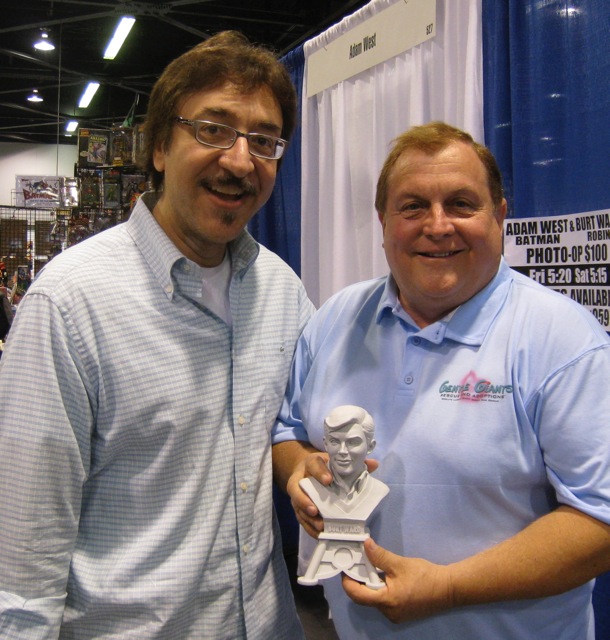 The busts of Adam and Burt have come in handy when drawing the Batman ’66 comic. When I have a difficult angle or such, I grab one and look at that specific view, which saves time finding the right photo of them — so all the hard work paid off twice in making these busts. … (And) what a thrill to see (the original Batman costume) in person. I was surprised to hear they used a blue dye that had faded on much of the suit and cowl. Having studied the actual costume, I’m really particular about getting the details accurate in the art. 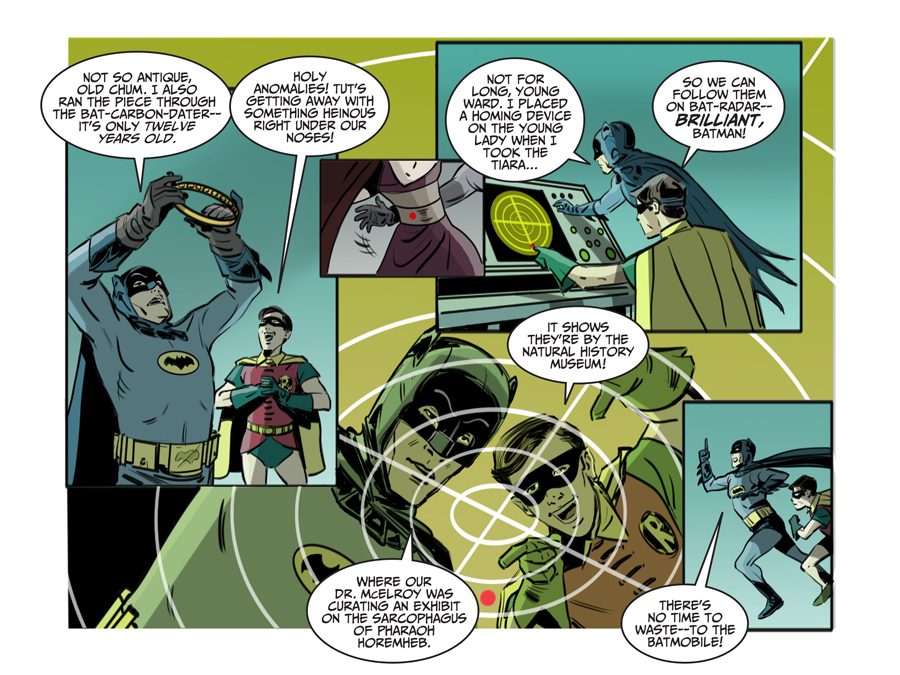 Also from the Tut story

It’s been a thrill to be an artist on the DC Batman ’66 series, another “who would’ve thought” experience. I got an email from Adam saying he’s read the issues I’ve done and thought they were terrific. I still get giddy when I hear from him! 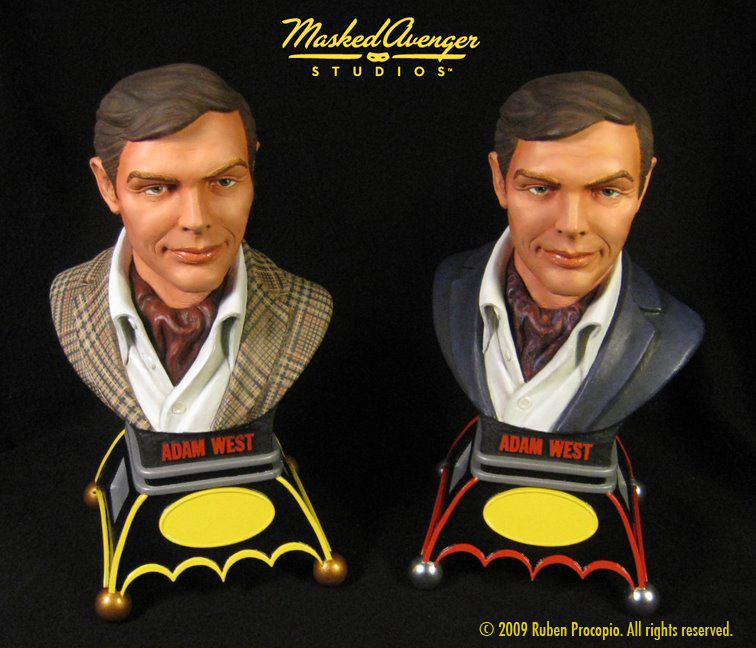